When Rolex introduced the Submariner LV in 2003, it raised many eyebrows. The Rolex Submariner is one of the most iconic watches in the world. Meaning “don’t touch it” and yet Rolex did.

The Rolex Submariner is one of the divers with the longest uninterrupted production up to today. This watch speaks to one’s imagination and it developed itself from being a professional tool watch to a luxury item. In 2003, the Rolex Submariner celebrated its 50th anniversary. 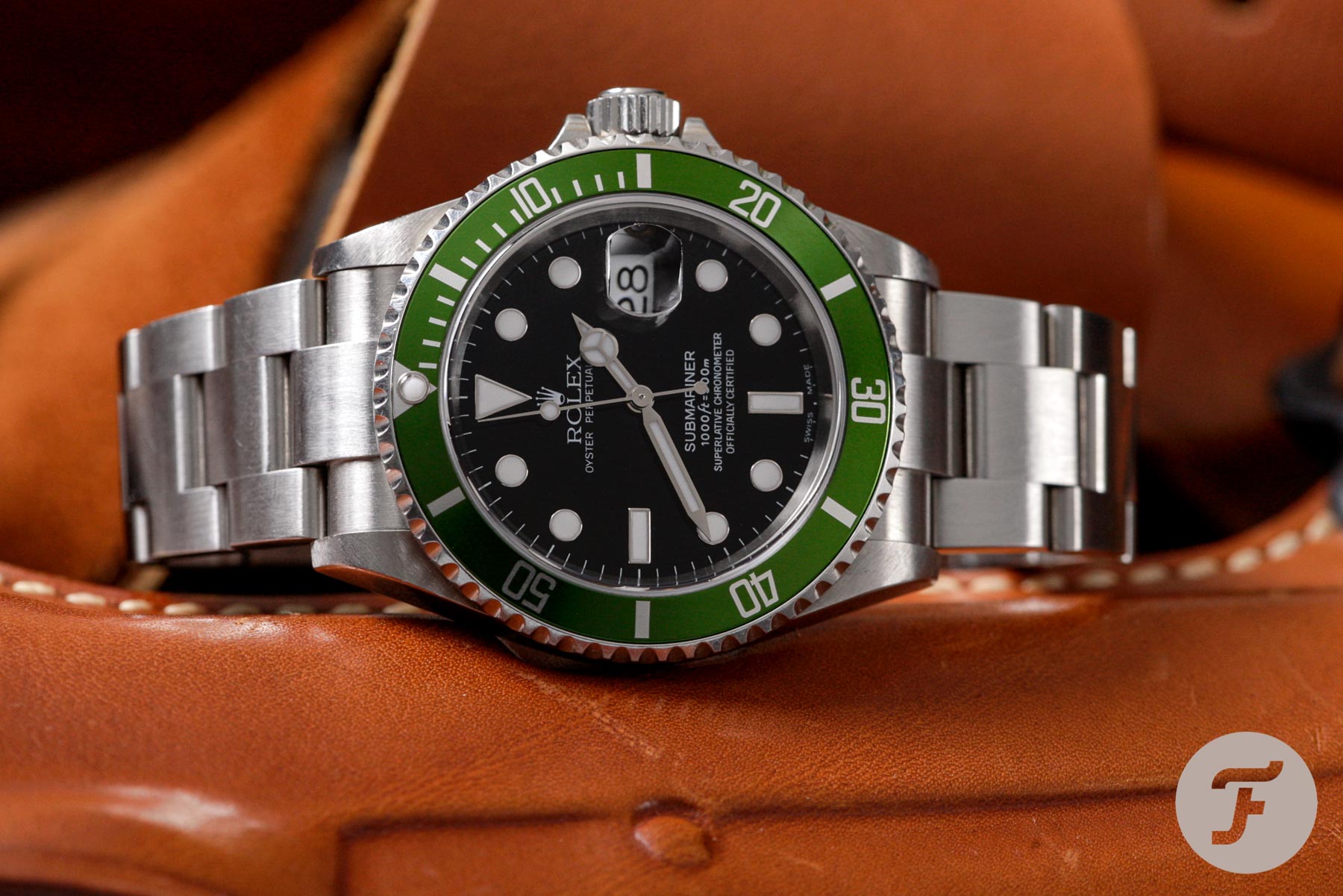 The Submariner Kermit had the same specifications as the regular Submariner Date (using caliber 3135). There were no real signs this was a tribute or anniversary model, other than the green bezel and maxi dial. Furthermore, there was no mention of an anniversary on the case back or in the paperwork that came with the watch. It is how Rolex celebrates. Basically, it doesn’t.

This introduction on the green Rolex Submariner Kermit wouldn’t be complete without mentioning the numerous variations of this watch. Mind you, these are all minuscule details that only connoisseurs and collectors would notice. In the seven years of production, from 2003 to 2010, there have been several different bezel versions, the “Flat 4” perhaps being most famous. “Flat four” means that the 4 of the “40” on the green bezel has a flat top. Then, there are some slight variations in the green color, some (almost) turning olive green. Often referred to as a B1 inlay or a Bertolli bezel. 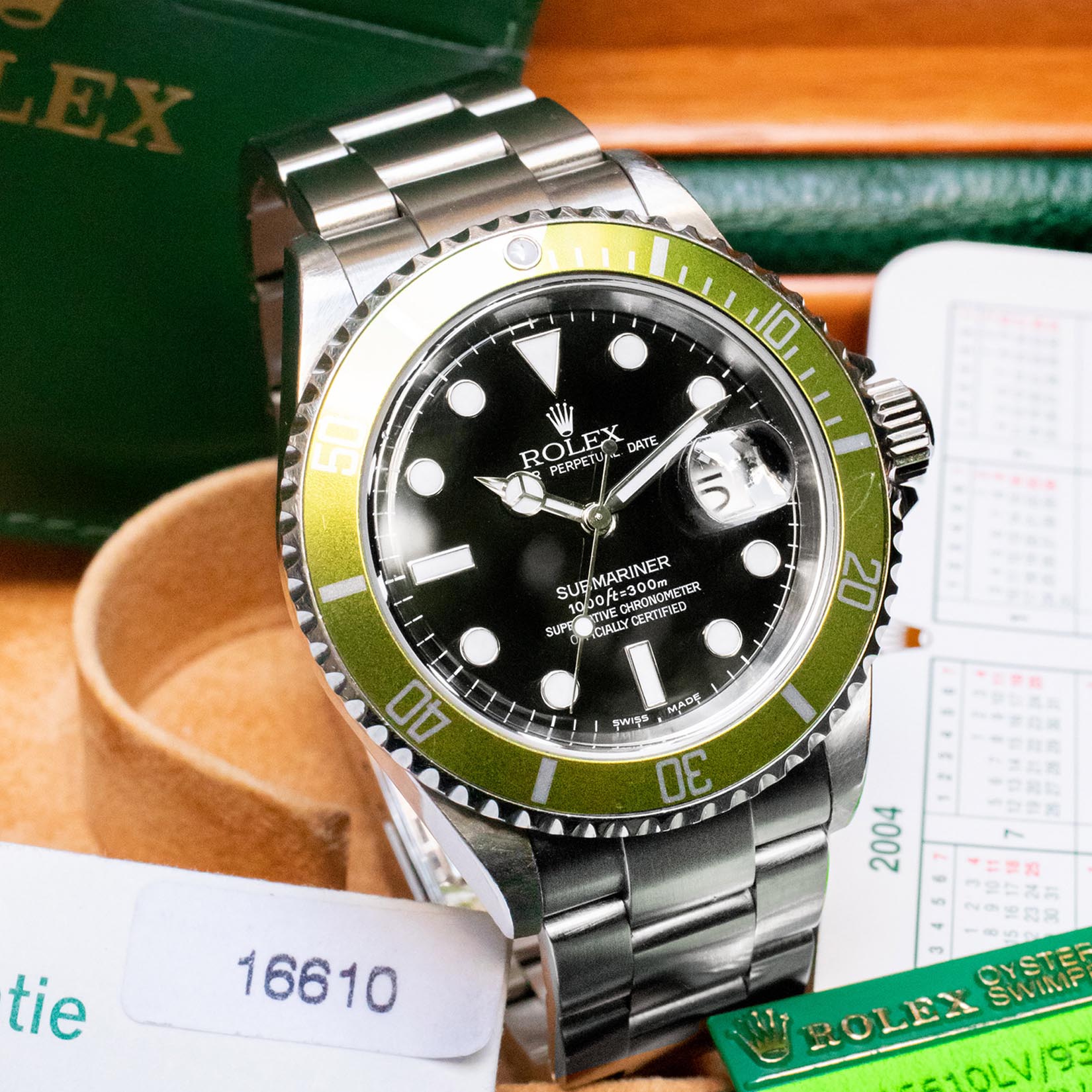 One other “major” change was applied in 2007, when Rolex decided to laser engrave the rehaut with its brand name. At 6 o’clock, you’ll find the serial number of the watch. No longer there was a need to remove the bracelet to read the serial number between the lugs. This change was not limited to the green Submariner 16610LV though, it was applied to pretty much all Rolex models. 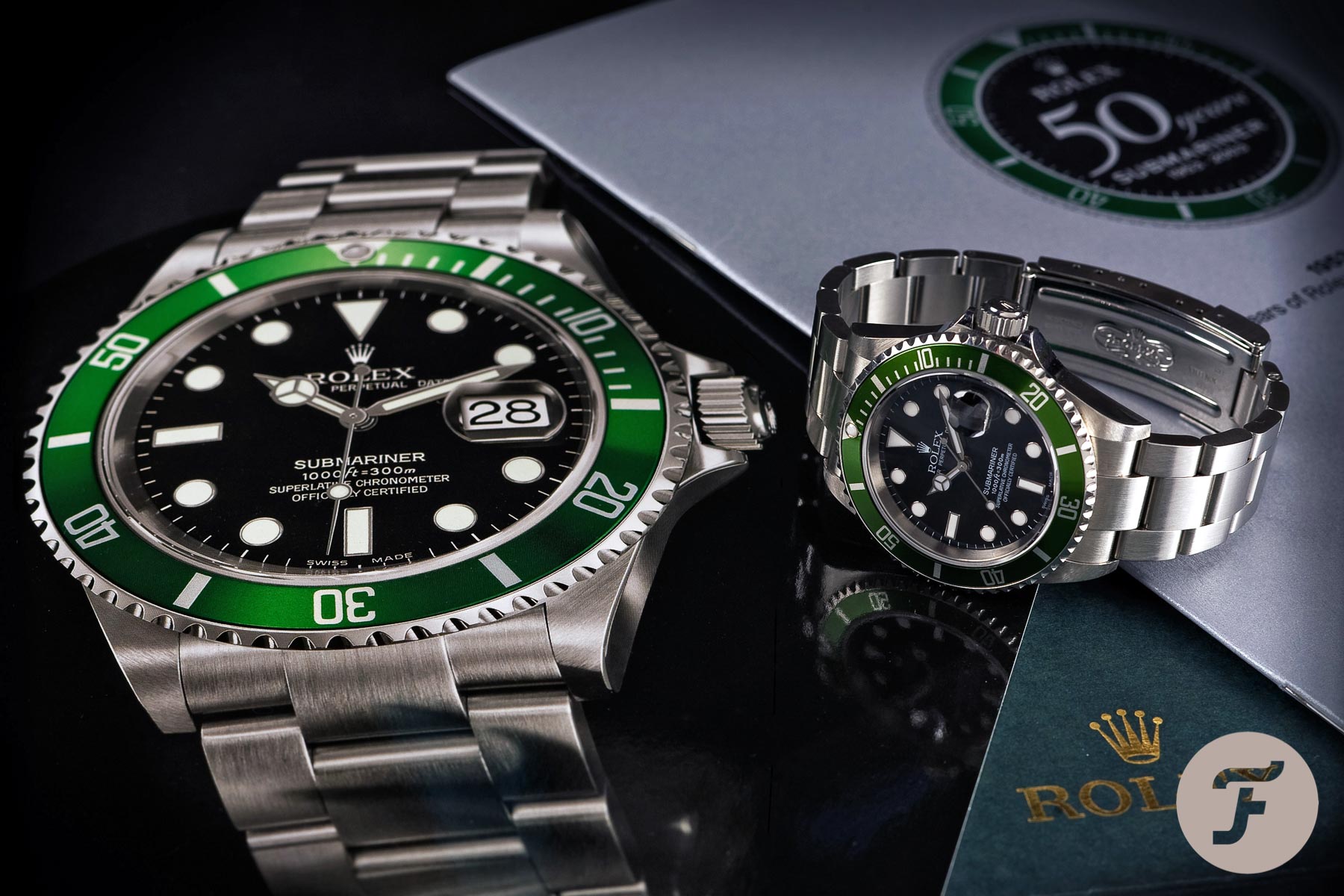 From the beginning, this green-bezel Sub has fans as well as haters. The price of the Kermit was identical to the regular Submariner Date and waitlists only existed for the Daytona. It was just a bold variation on the iconic diver with its black dial and bezel. As you all know, availability on these watches has changed quite a bit over the years. The very first Rolex Submariner 16610LV Mark I and II versions are especially sought-after. Prices for a Submariner Kermit are all over the place, almost reaching €40,000 (~ $45,000) for an unworn watch from 2003. Then, in 2010, Kermit was replaced by the Hulk. 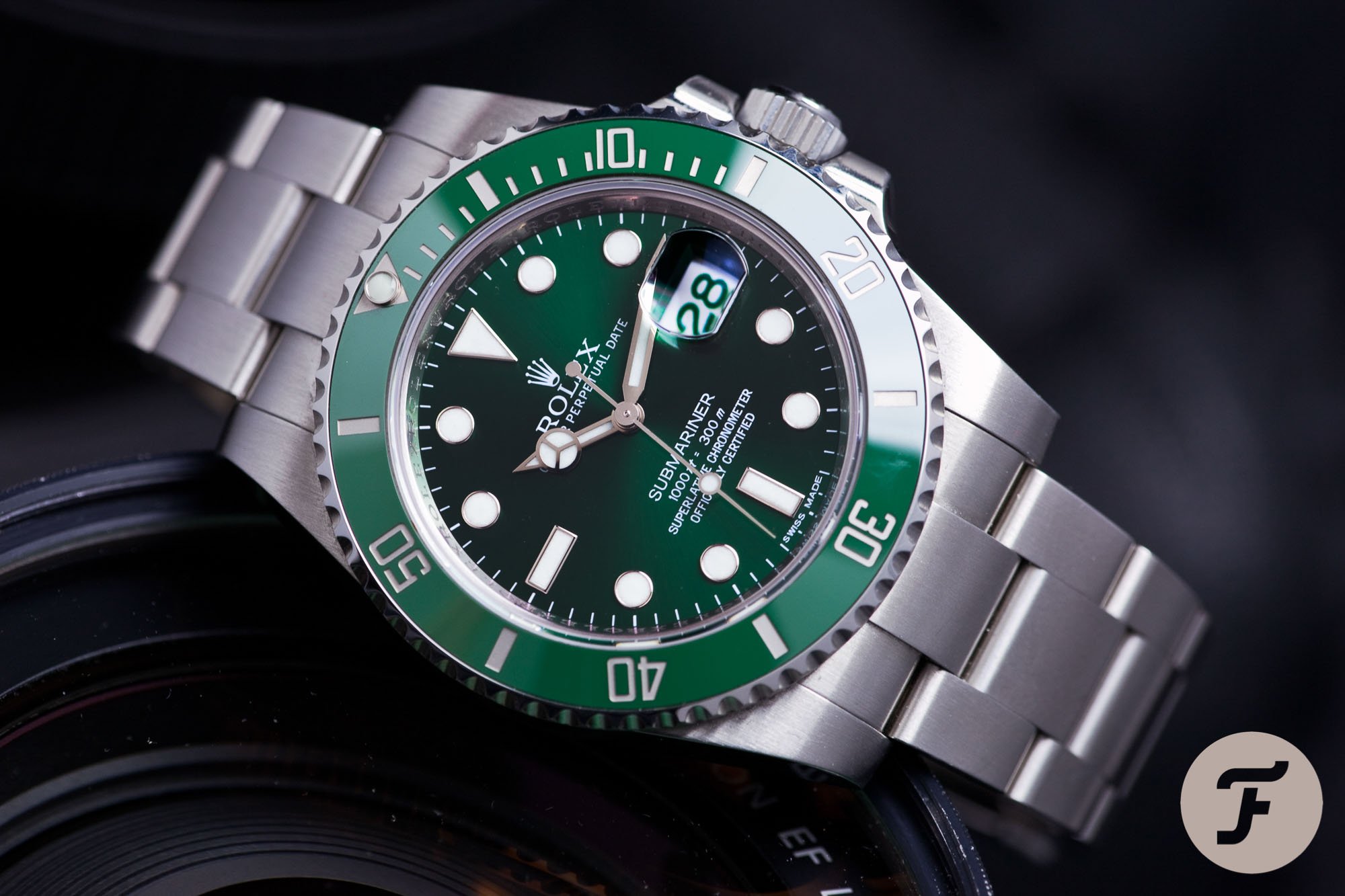 In 2010, Rolex introduced the ceramic Sub. You can find a historical overview of all Submariners in our write-up here. The Sub Date 16610 and therefore “Kermit” as well were discontinued in 2010, and the new models were clearly an upgrade on many levels. They boasted ceramic (Cerachrome) bezels, maxi dials, maxi cases, and a new bracelet. What remained was the trusty Rolex caliber 3135, a movement praised by many enthusiasts and watchmakers. Enthusiasts loved it because it is so accurate and reliable. Watchmakers fawned over them because they are so easy to work on. Our own Fratello watchmaker Paul always jokes (I hope) that he can drink while fixing one. The movement did receive some improvements by Rolex, assuring accuracy of +/-2 seconds per day on average. 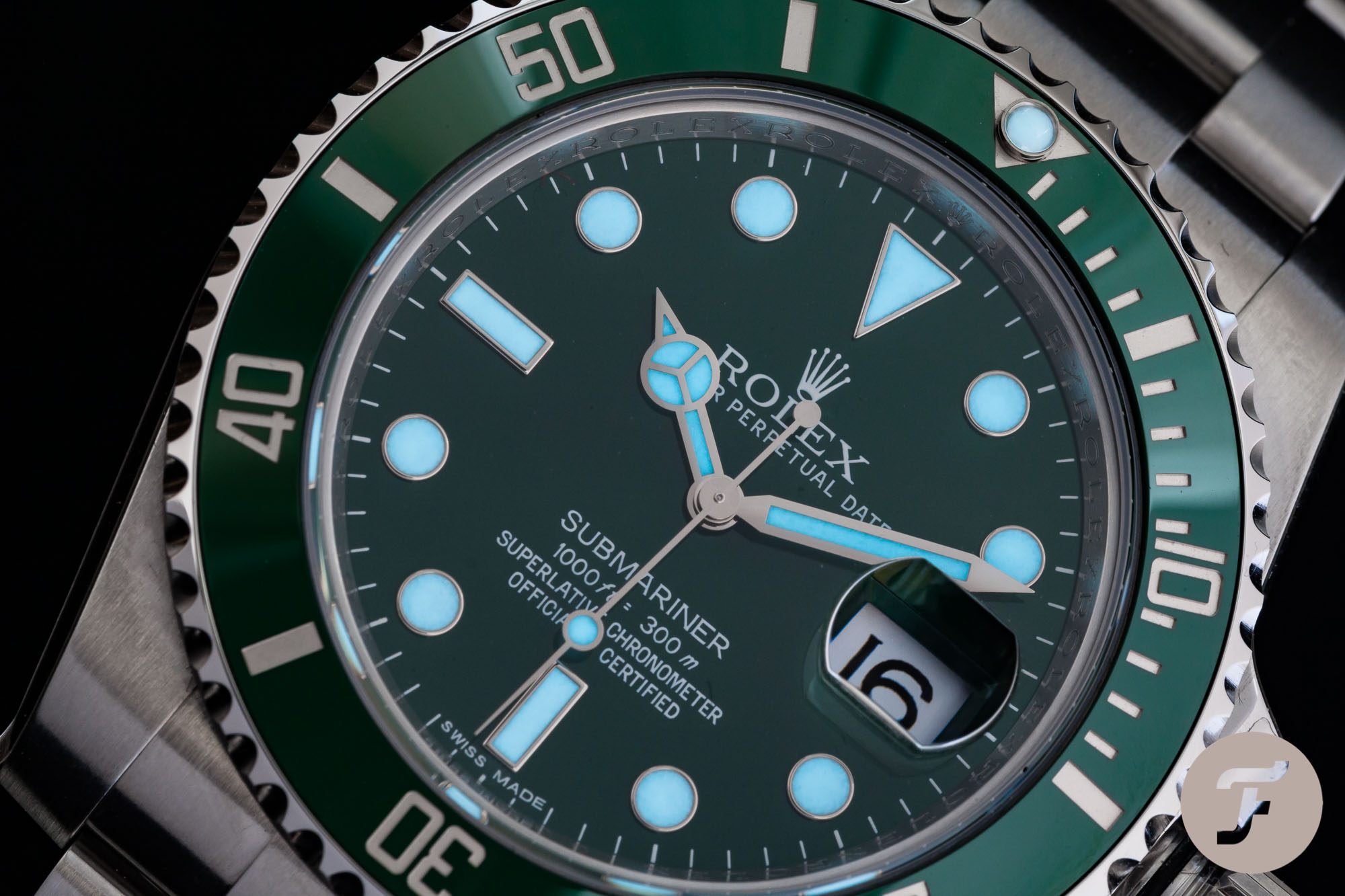 The most important changes were the maxi case and the new Oyster bracelet. The diameter of 40mm remained, but the lugs got a lot beefier. The Oyster bracelet finally received an update as well for the Rolex Submariner, with a Glidelock system for easy adjustment. No more soda can clasps! Another improvement over the previous Submariner generation is the use of 904L steel instead of 316L steel. 904L is (marginally) more corrosion resistant.

Before 2010, the Sea-Dweller already used 904L steel. As you can see in the picture above, the luminous material also changed for this new generation of Submariners. Rolex started applying Chromalight to the glow-in-the-dark markers and hands.

Value development, with the effect of the introduction of the new Submariner clearly visible.

What surprised me a bit, is that Rolex kept the green Submariner in the range for so long. I was always under the assumption that it was an anniversary model and would perhaps disappear at some point. I was wrong, obviously. Green is here to stay, and in this new reference 116610LV Rolex not only kept the green bezel, but it also added a green dial.

Due to the beefier lugs and overall more rugged presence, the nickname “The Hulk” was initiated by enthusiasts. The green Rolex Submariner Hulk was in production from 2010 till (August) 2020, replaced by the new Submariner Date 41mm. Prices of the Hulk already saw a bump because of unavailability, but now received another spike in value development. Expect to pay around €17,000 (~ $20,000USD) today for a Submariner Hulk. 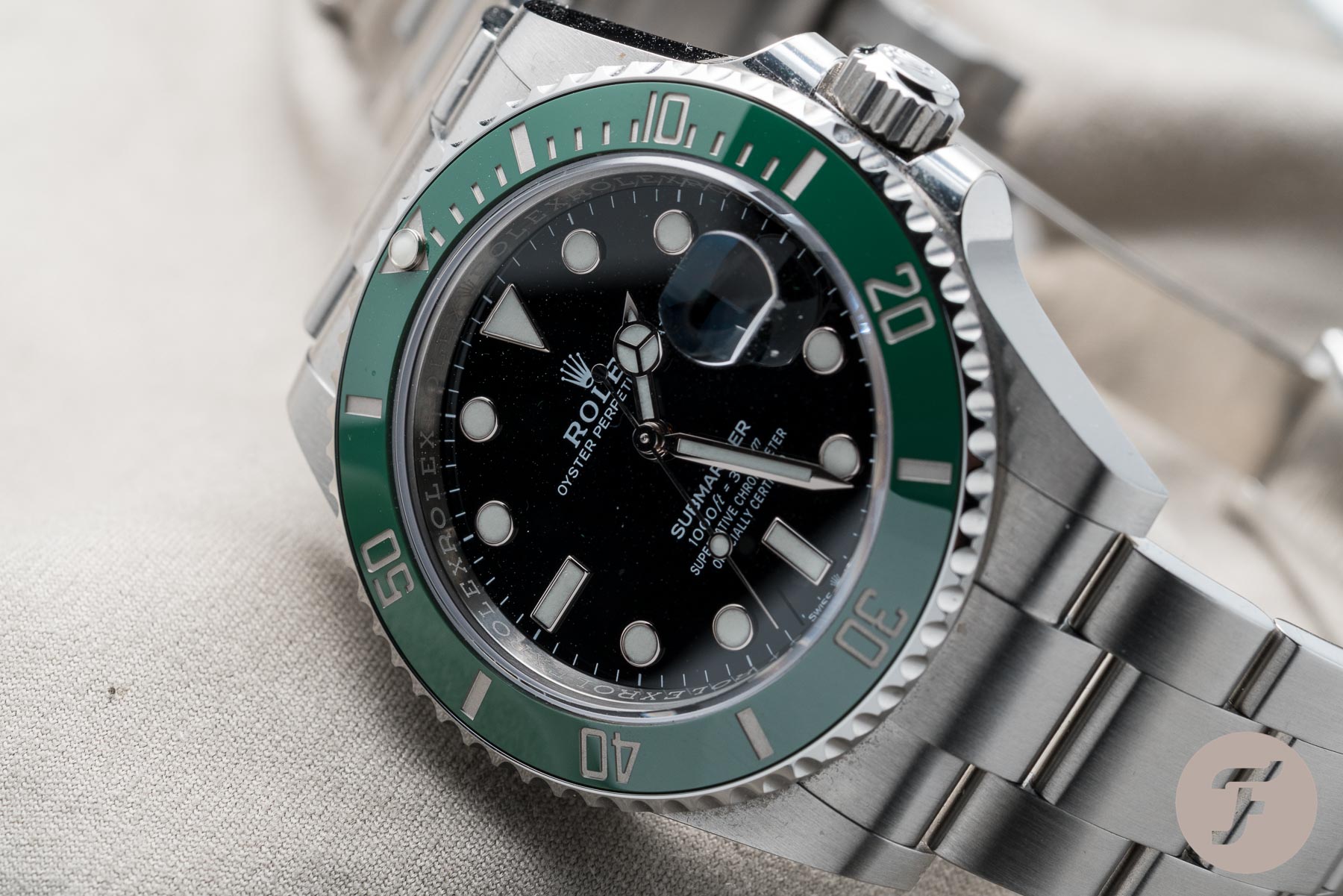 On September 1st, Rolex introduced an entire new Submariner collection. We covered the initial introduction in this article, and recently we published a story on the full gold version as well. Rolex made sure to include a new green Submariner as well. This is reference 126610LV. 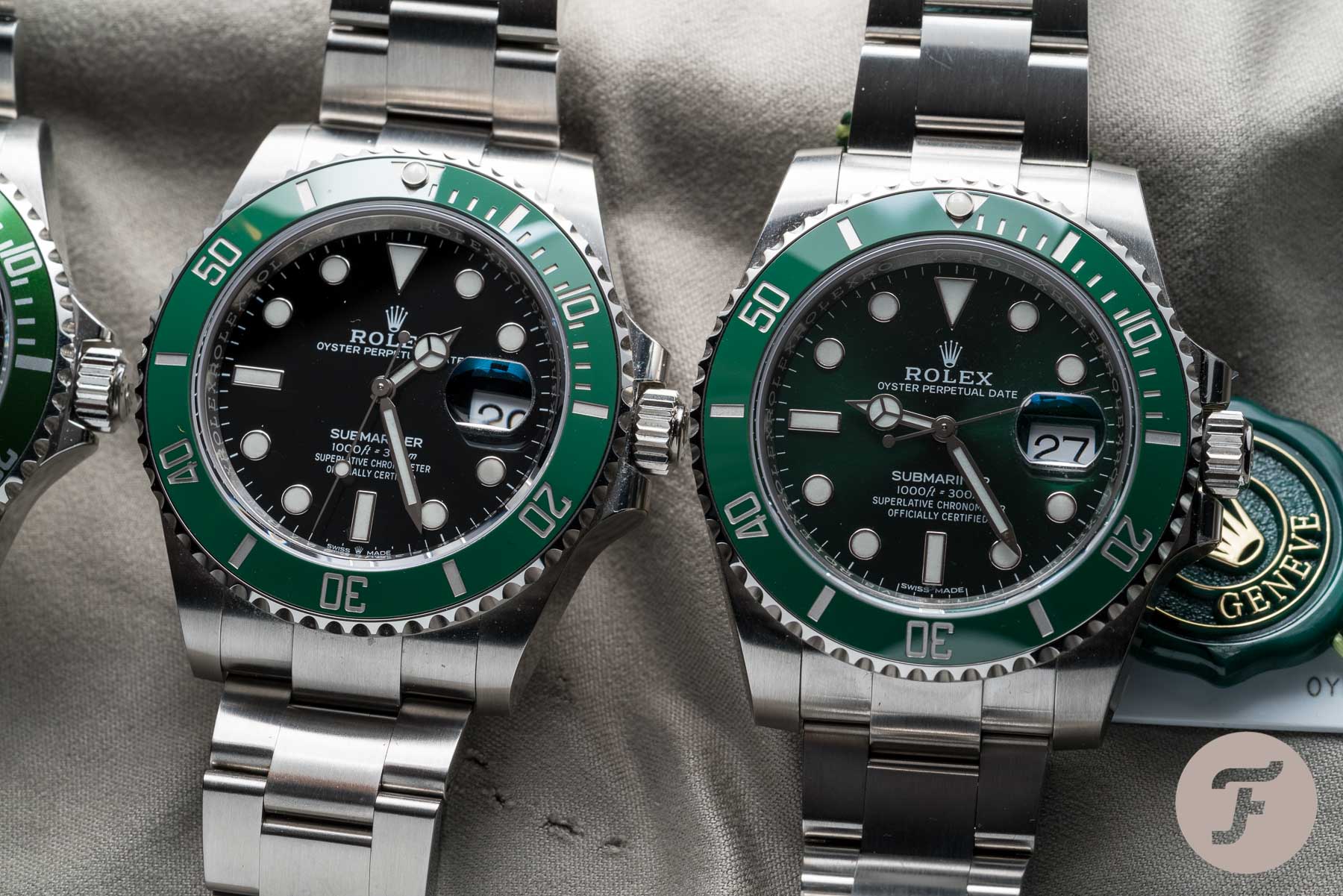 Starbucks on the left, Hulk on the right

The most important upgrades are the new 41mm cases with thinner lugs, wider bracelets, and a new movement. Rolex has installed caliber 3230 for the no-date version, and caliber 3235 for the Date models. These new movements offer more power reserve and higher efficiency due to the Chronergy escapement. The new green Submariner didn’t have to wait long for a nickname. The green ceramic bezel and black dial reminded some people of the Starbucks logo. 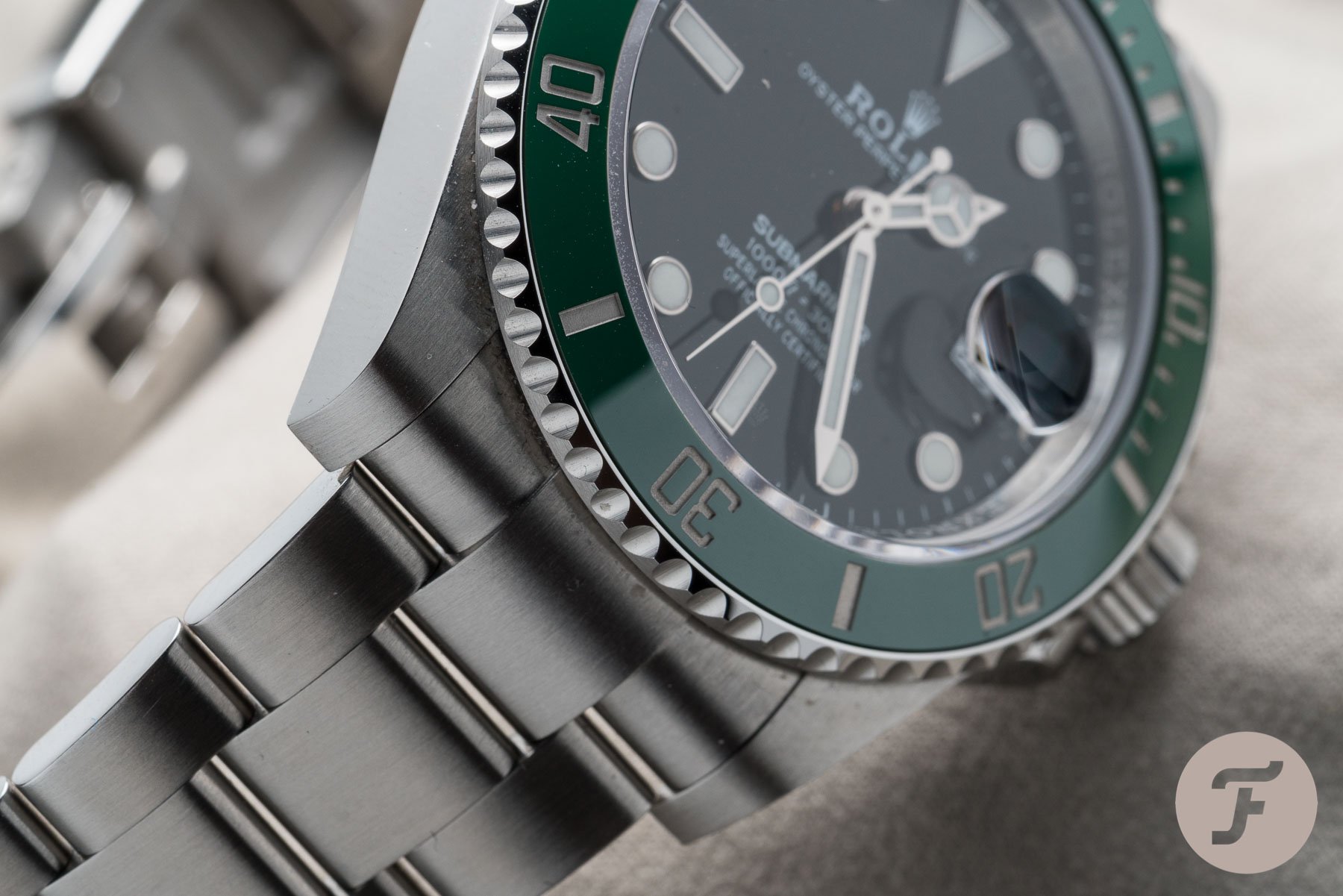 With the Submariner Starbucks, the design is actually more leaning towards the Kermit than the Hulk. Where the Hulk had a green dial, the Starbucks is back to black. It is not something I expected Rolex to do actually, but the brand are very good at doing things nobody expects. 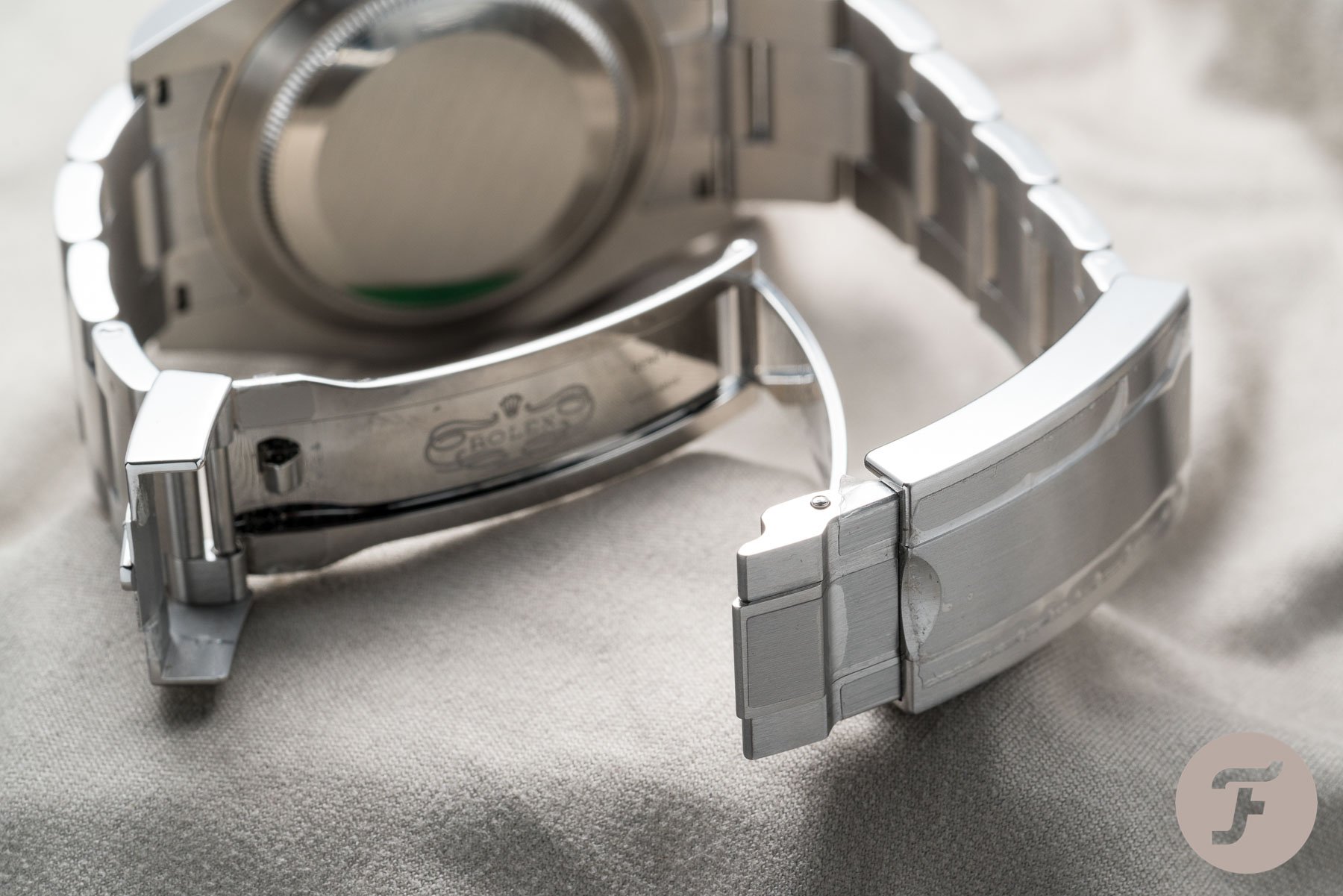 Interesting about the Rolex Submariner Starbucks is the new Oyster bracelet. The end pieces measure 21mm instead of the previous 20mm, but also the clasp is noticeably wider than on the Hulk. But that also applies to the normal Rolex Submariner Date 126610LN and all other new references. 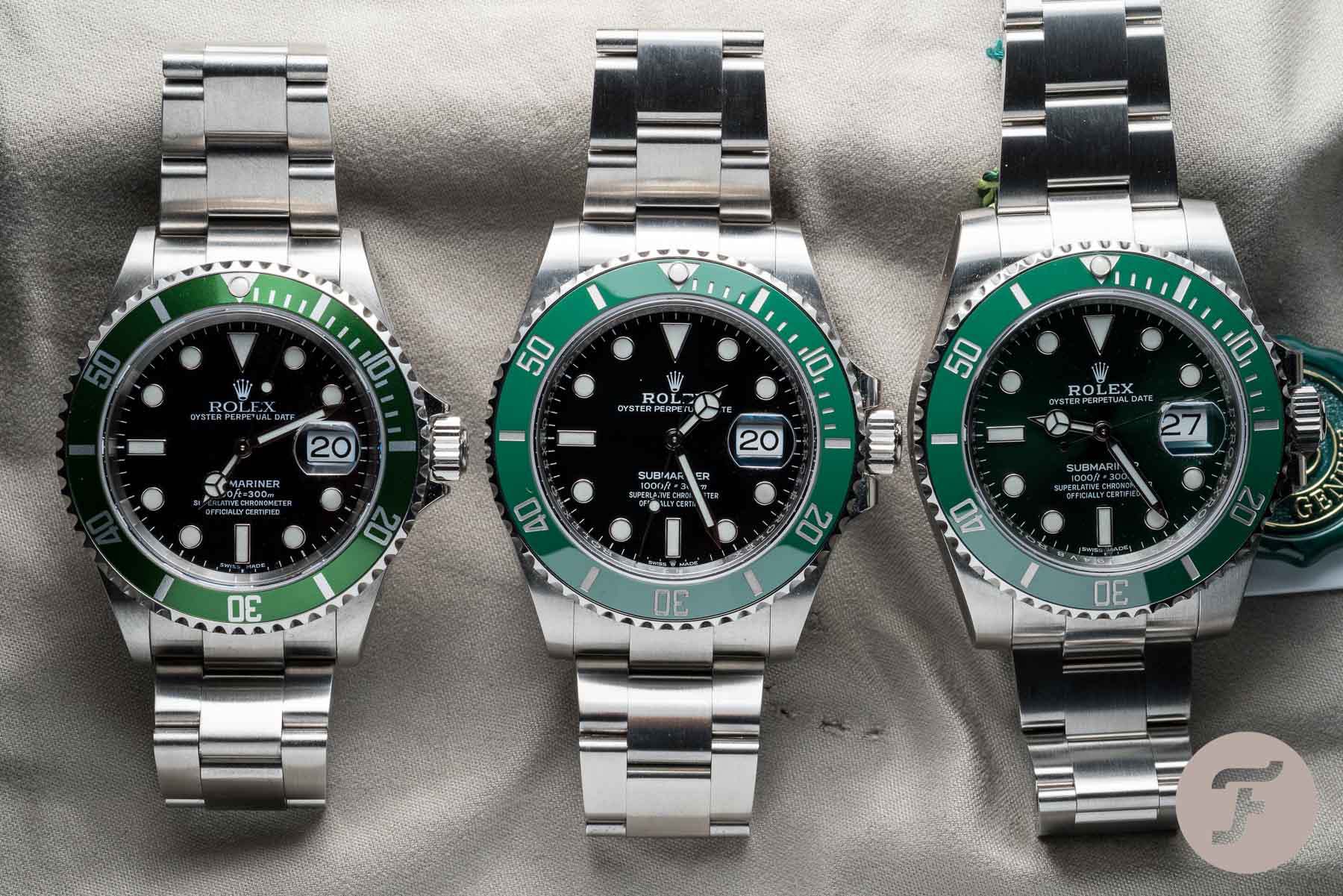 Here we are, with three generations of green Submariner watches from 2003 to 2020. Although the standard Rolex Submariner Date 16610 doesn’t cut it for me, the Kermit with its green bezel and maxi dial was a very good alternative. Today, the prices on those are too high to be an alternative to a standard 16610.

The Submariner Hulk, with its beefy lugs and green dial, was a major improvement over the Kermit in terms of technology, but it lacked a bit of elegance (as did its namesake). I used to have a Submariner from this generation in my collection, and the beefy lugs or maxi case never bothered me. That was until I had the chance to place all three of these watches side-by-side.

The 2020 Rolex Submariner 126610LV Starbucks is most impressive and combines the best of both worlds, it seems. I do have a slight preference for the Kermit when it comes to the green color though. Especially those olive green ones. I think they are incredibly nice to look at.

A big thank you to Van Schaften Horloges to let us shoot their Rolex Submariner collection.

Which green Rolex Submariner do you prefer?