Every year at the SIHH we receive a ‘financial update’ from the AP CEO on how they broke another record. Without having to produce (and deliver) more watches than the previous year. One of the reasons for these increasing nett results is the fact that they are doing more sales via their boutiques.

That’s a nice development for the company, but what if your country or region does not have a boutique? Some of the models that Audemars Piguet introduces are boutique-only, and that’s sometimes a sore fact for the fans. Here in The Netherlands for example, there’s no Audemars Piguet boutique. We only have multi-brand stores carrying this brand from Le Brassus. I guess this applies to many more countries around the globe. 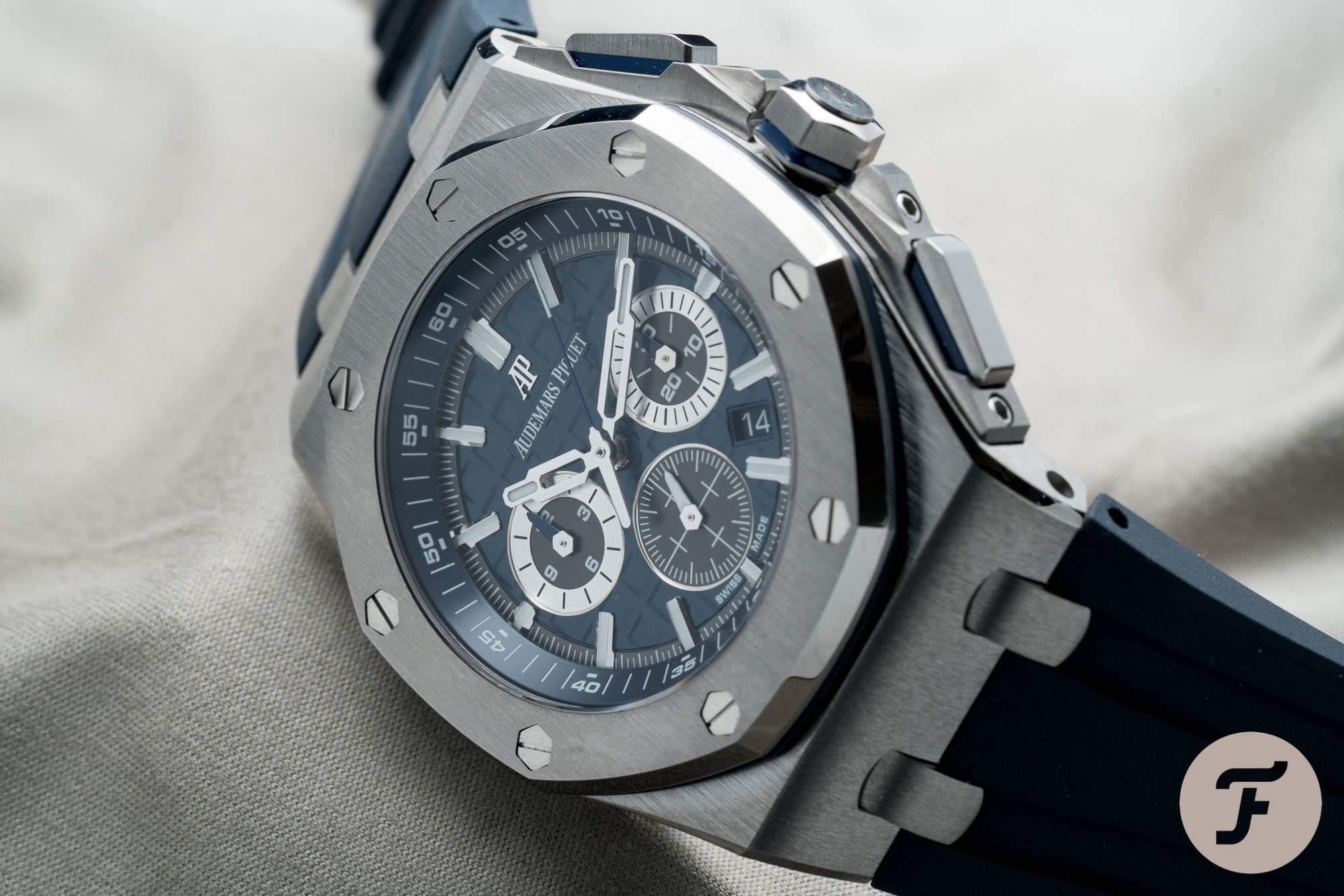 When Audemars Piguet showed us the novelties for 2019 in Geneva, they kinda forgot to show this important reference 26480TI. I don’t blame them, they can’t show everything and they were also clearly more into ‘guiding’ the introduction of the Code 11:59 watches and explaining to journalists why it doesn’t suck. But it does mean that we completely missed this Royal Oak Offshore chronograph 26480TI reference.

Earlier this year, I showed you the history of the ‘classic’ Royal Oak Offshore since 1993 all the way to the later and current (new) Offshore models. And the differences between them of course, sometimes very tiny. You can find that article here.

Even though ‘The Beast’ is still around (reference 26237ST), Audemars Piguet constantly innovates and develops new versions of the Royal Oak Offshore. Improved versions, you could say.

With a thickness of 12.8mm this watch is relatively thin for a chronograph, especially for an Offshore. Especially compared to the very first Offshore, with a thickness of 16mm, this is definitely an improvement. The case is made of titanium, hence the TI designator in the reference number.

As always, the finishing on the case of the Royal Oak Offshore is simply amazing. 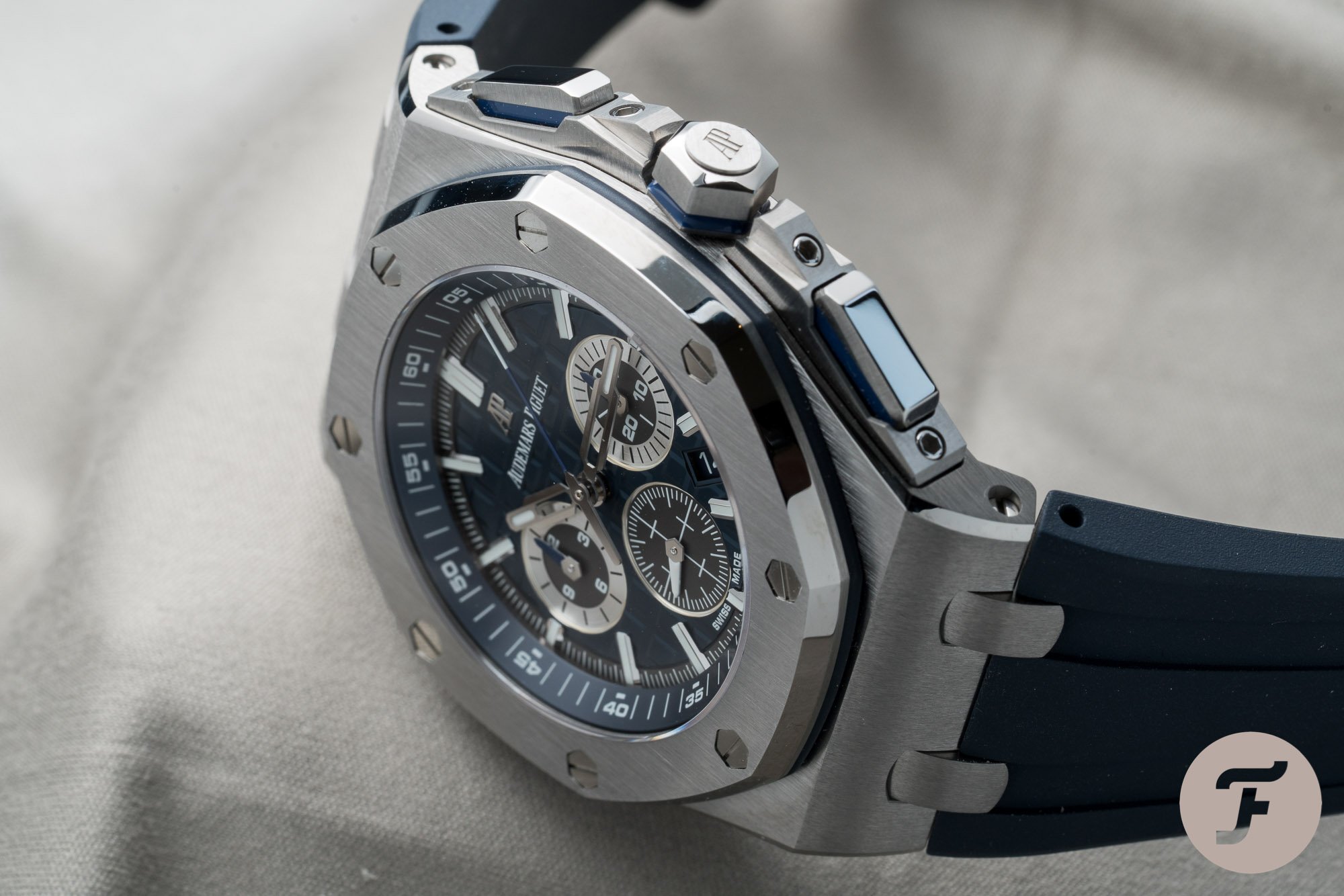 The titanium case of the Royal Oak Offshore Chronograph 26480TI also has a bezel made of titanium, pushers and crown of titanium and the screwed-on guards idem ditto. It all looks and feels very solid, despite the very light-weight.

As always, the finishing on the case of the Royal Oak Offshore is simply amazing. Beautiful brushed surfaces, combined with polished ones. For me, that’s definitely part of the attraction of a Royal Oak (any model). Now, titanium is lighter and stronger than steel, but it scratches just as easily. So if you have OCD, think twice before you purchase (any) Royal Oak. Titanium won’t help your case. 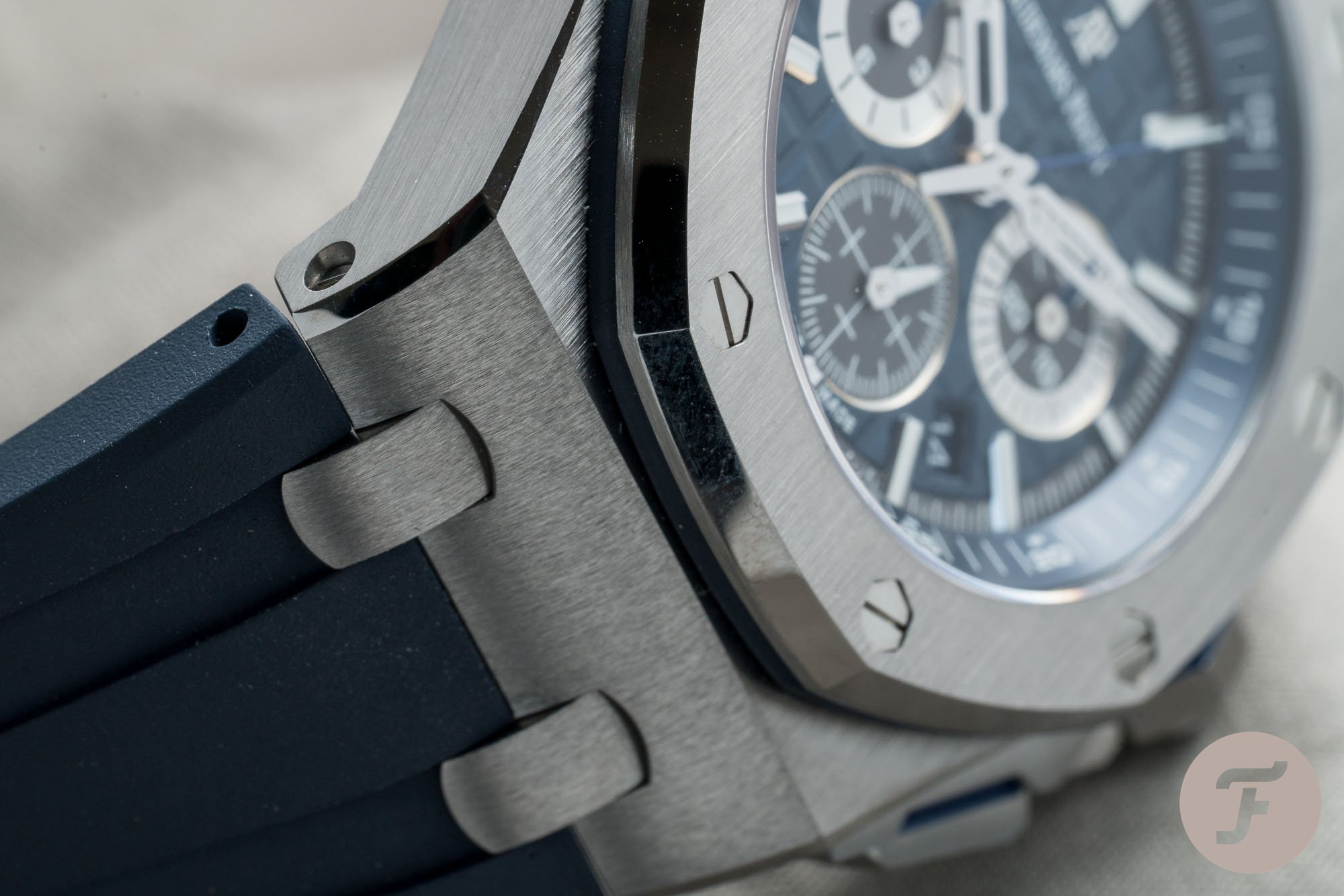 Ever since that first Royal Oak A-series in 1972, the dial has this pattern with squares (Clous de Paris). When AP introduced the Royal Oak Offshore in 1993, they did it a bit differently and made it ‘Méga Tapisserie’, which has become the trademark for their ROO models. On this new reference 26480TI, we find a rich designed dial. Not only due to the ‘Méga Tapisserie’ but also because of the use of colours and graphics. There’s a lot going on in the subdials as you can see, which is probably not for everyone, but I like it. And sometimes it is just as easy as that: you either like it or you don’t. Another drastic change are the hands on this Royal Oak Offshore 26480TI. They are partly skeletonised and only the ends are filled with luminous material. Just like the hour markers, the hands are also made of white gold. The three chronograph hands are in blue, for an easy distinction. At 4.30 you will find the date window. This time no ‘date in the basement’ like on the piggybacking movement models (see next paragraph), but a date that’s more close to the surface and without the need for a cyclops. 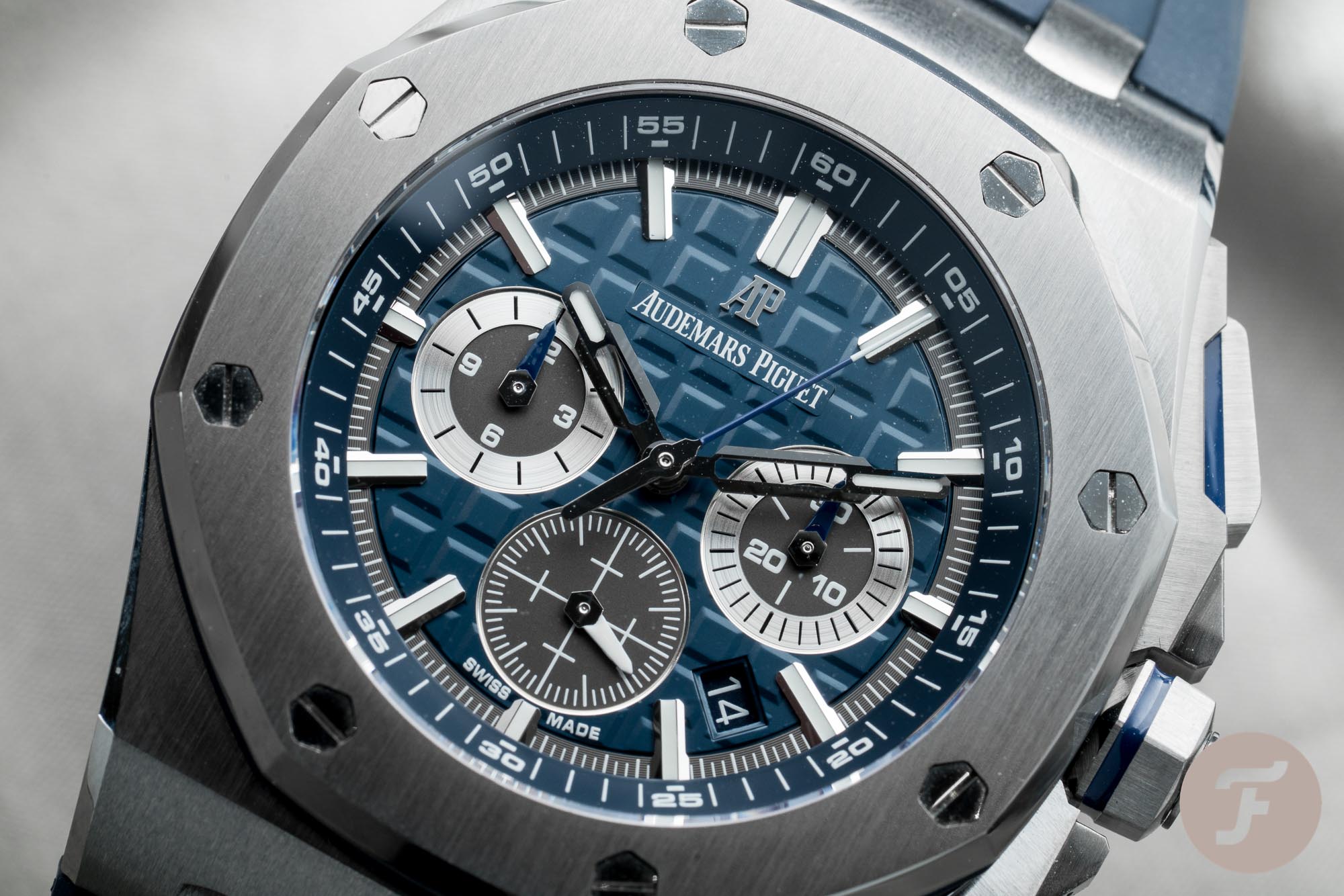 Where you will find the piggybacking chronograph movement in The Beast, this Royal Oak Offshore Chronograph 26480TI has the dedicated chronograph caliber 2385 movement. This movement is based on a caliber from Frederic Piguet (Blancpain these days), also from Le Brassus. This movement also can be found in the Royal Oak Chronograph (non-Offshore) models. I used to have a Royal Oak Chronograph reference 26300 (discontinued a few years ago) which had the exact same movement. A solid performing movement, which I actually prefer over the module movement mentioned before. All the specific details of this movement can be found in the specsheet below, but important to know is that is concerns a column-wheel chronograph movement and that it has a power reserve of 40 hours. The movement is not visible in this watch, but it has a very nice level of finishing. Just so you know.

A Royal Oak (Offshore) is not for everyone, even when AP make things thinner and lighter.

This Royal Oak Offshore Chronograph 26480TI comes on a rubber strap with a pin buckle, adding to the sportiness and comfortable fit of this watch. I have always been in favor of the non-Offshore Royal Oak models, but with this thinner and lighter Offshore it is slowly changing my personal opinion on it. The Offshore has been a great asset for AP and with this new thin and light 26480TI reference it will definitely continue to be that way. This watch is also available through all retailers, so not a boutique-only edition and neither is it limited. Perhaps limited by production, but not by a specific number. It might become a very nice backbone of the ROO collection from now on. The price of this watch is € 27.500,00 and AP delivers what you should expect for such an amount: a watch with a stunning finish. The caliber 2385 movement is perhaps not in-house, but it has quite a track record and is an integrated chronograph instead of an add-on chronograph module. 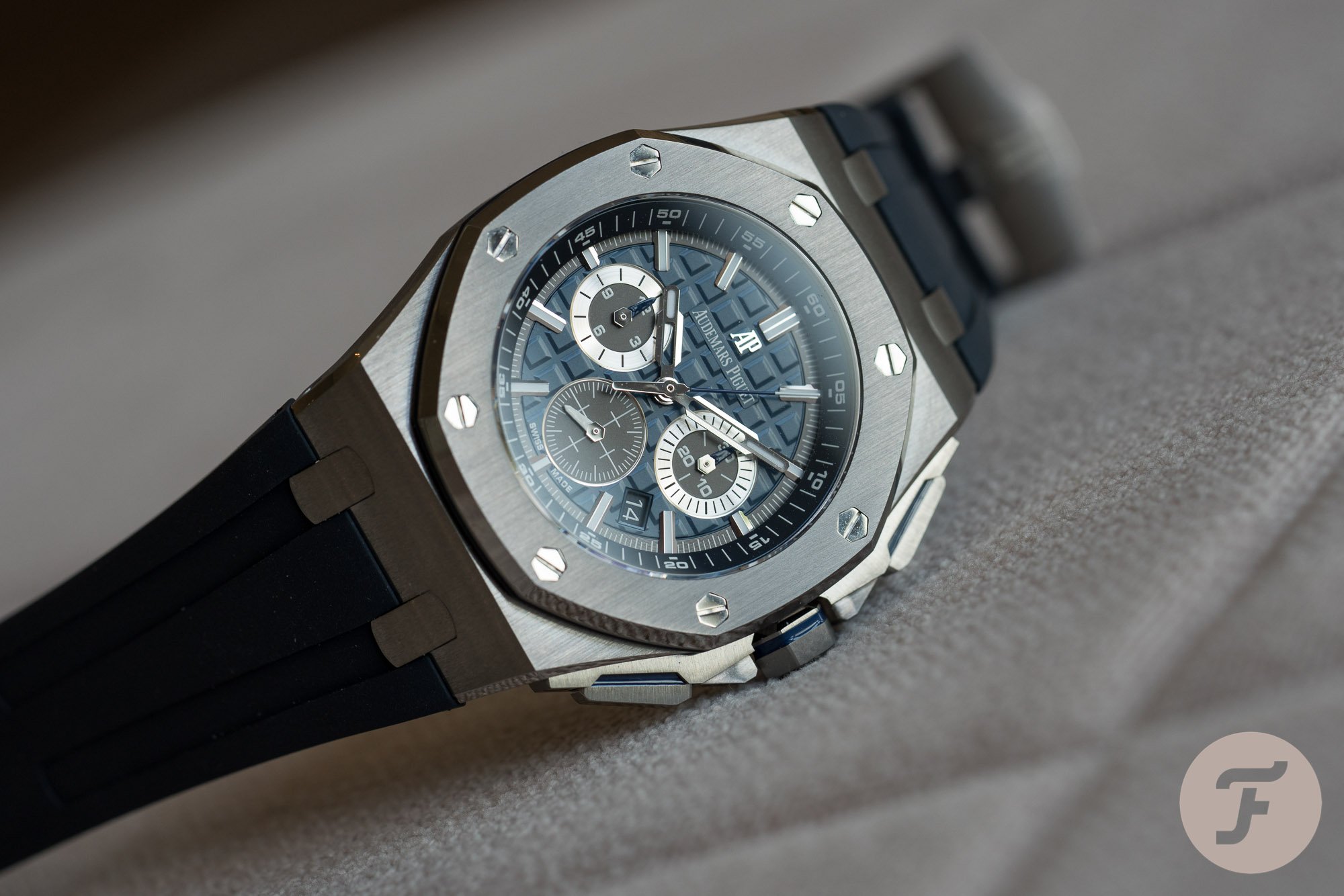 The 26480TI is perhaps more subtle than ‘The Beast’, but it surely has its edge still. A Royal Oak (Offshore) is not for everyone, even when AP make things thinner and lighter. And this is the way it should be.

Hot Topics
Introducing: The New Seamaster Professional 300M 60 Years Of Bond — With A Special Animated Case Back
105 comments
Are You Still After An Omega × Swatch MoonSwatch?
103 comments
Introducing: The Oris Divers Sixty-Five Fratello Limited Edition
100 comments
It’s Time To Invest In A Dress Watch — Our Picks From Breguet, Omega, Grand Seiko, And More
74 comments
The Rolex Waitlist Conundrum — How Much Will The Price Of Your Watch Increase While You Wait?
50 comments
Popular
Two Patek Philippe Nautilus Watches: 3700/1A Versus 5711/1A
Robert-Jan Broer
16
#TBT A Vintage Seiko Buyer’s Guide to Affordable Goodness
Michael Stockton
32
Speedy Tuesday – Olympic Games 2020 Speedmaster For the Japan Market
Robert-Jan Broer
3