The Scatola del Tempo Rotor-One is a well-tried concept from the legendary Italian company that received a facelift.

We reviewed the earlier version of the Scatola del Tempo Rotor-One almost four years ago. A lot has changed with the company since those days though. First and foremost, it has new ownership. Until 2018 the company was owned by the family of Sandro Colarieti, the founder of Scatola del Tempo and the inventor of the watch winder as we know it today. Last year Mr. Xavier Castelli the new owner of SwissKubik (another company known for watch winders) acquired Scatola del Tempo. With that, many of the new and improved features of SwissKubik products have become part of the reimagined Scatola del Tempo winders. The looks that worked well for so many years remained the same. Some upgrade was inevitable, and this is where SwissKubik came to help. The result is a new Rotor-One, and we’ll have a look at it now. 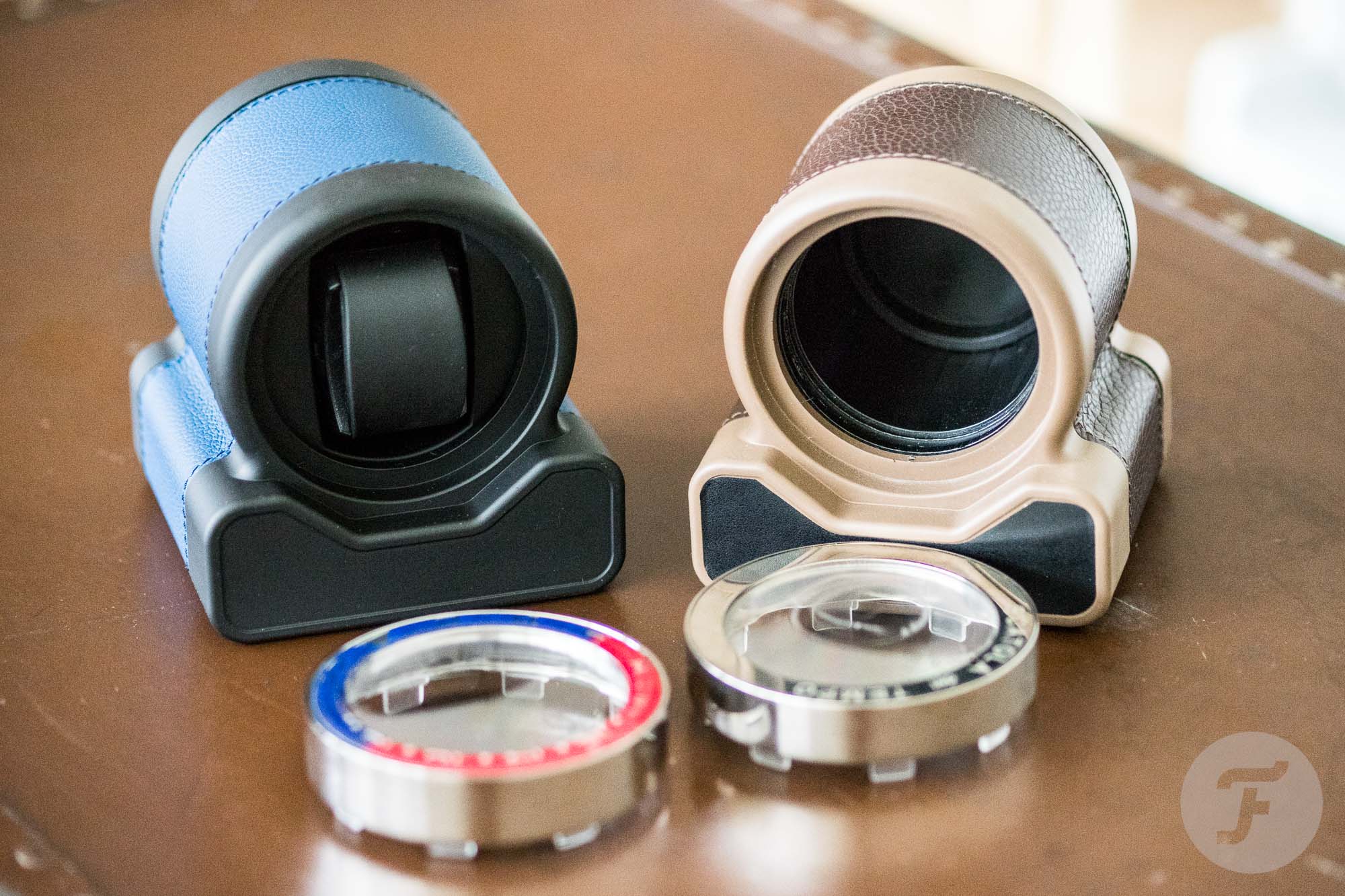 To the naked eye, the new Rotor One seems precisely like the old one. Though if you take a closer look and compare you’ll notice that many things are different. Small, minuscule details, yet they all add to the bigger picture. The new Rotor-One is the same width and height as the old, but it is much deeper. While the old one was 9.1cm, the new is over 10.5cm. This also means that the leather strip is wider since the ABS polymer frame at the front and the back are the same thickness.

All in all, the dimensions are 11.5 x 10 x 10.5cm. Speaking of the leather strip, you can choose between 7 different colors from black to chocolate, hazelnut, grey, green, red and the blue, the one you see in the photos. There’s plenty to choose from if you’d like to customize the look of your winder. 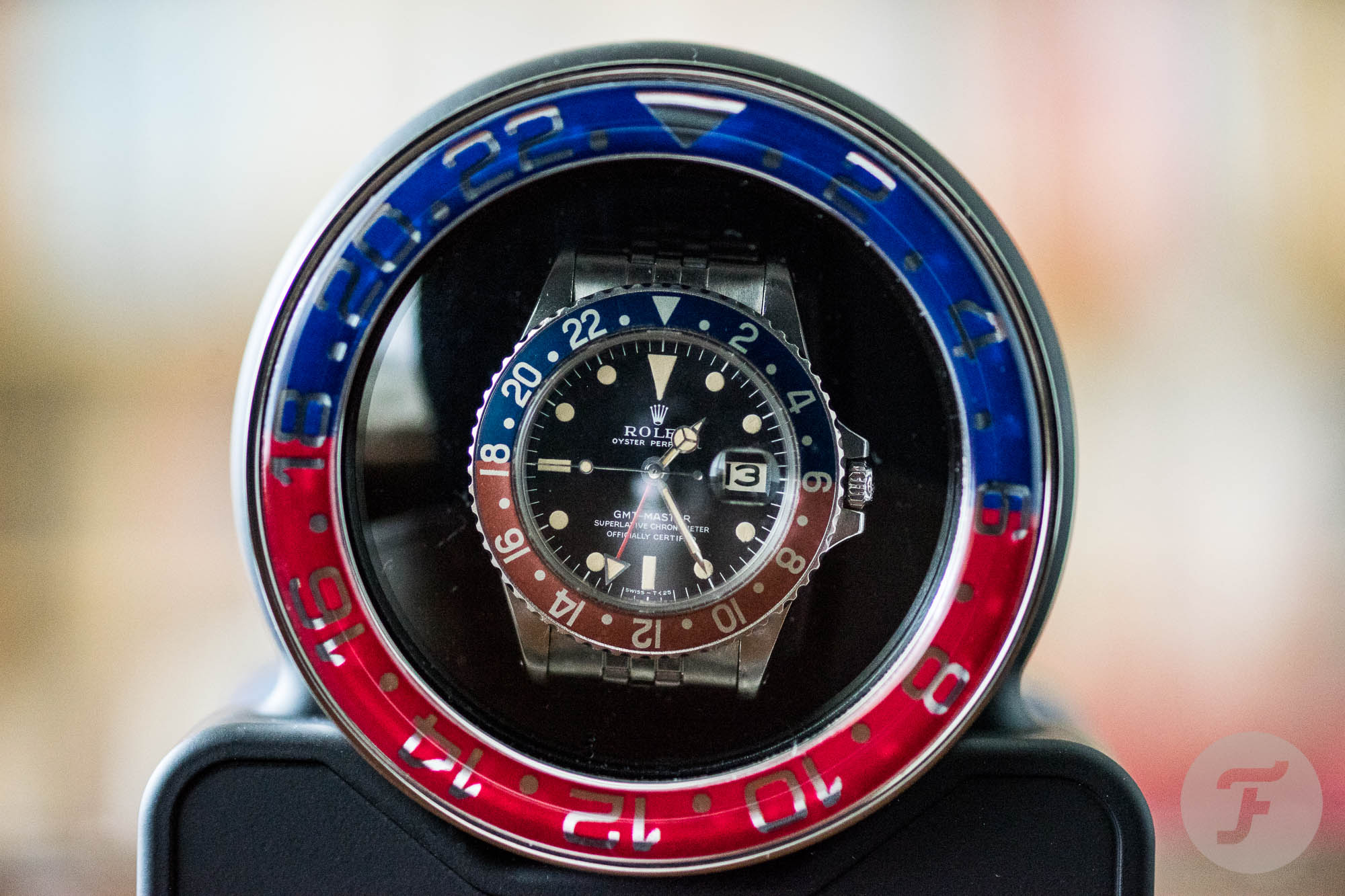 The inside of the winder is also different. The old one was just an empty round space in which you could insert the watch holder however you wanted to. Over time that holder would give up and the plastic would break. In the new Scatola del Tempo Rotor-One, on the other hand, you can only fit the new watch holder. It’s not round and open anymore. The holder is a thicker two-piece spring-loaded plastic where you can put a watch of any size. The spring-loaded back will adapt the size of the bracelet/strap. It fits perfectly into the winder. You can secure it by pushing it in. A firm click sound lets you know that the Rotor-One’s holder is in place. Whenever the winder stops, it always turns back to then 12 o’clock position. The front cover is the same design as the old one, albeit thicker. 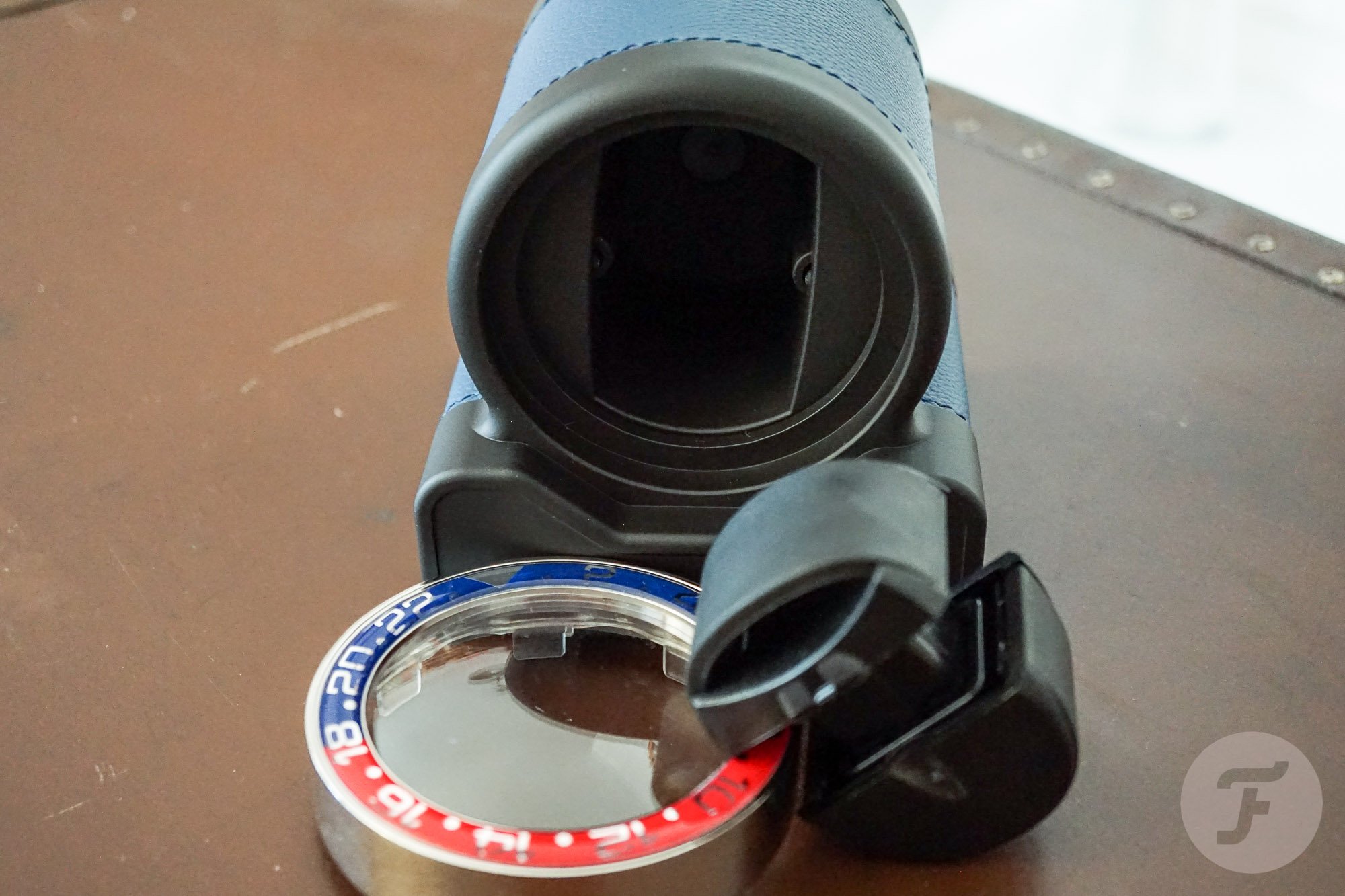 It is a thin metal ring that holds the plastic domed window in place. The one I received as a GMT Pepsi bezel-like frame. For all of you Rolex guys out there, you can choose between various bezel insert designs. Other than the aforementioned Pepsi, you can have black, blue, red or batman. There are plastic flaps all around the cover so you can fix it to the front of the winder, should you need to protect the front of your watch. Whenever I use a winder, I make sure to use it with the cover on, although I do not use one a regular basis. It’s just luck that the Rotor-One looks good with or without the cover. 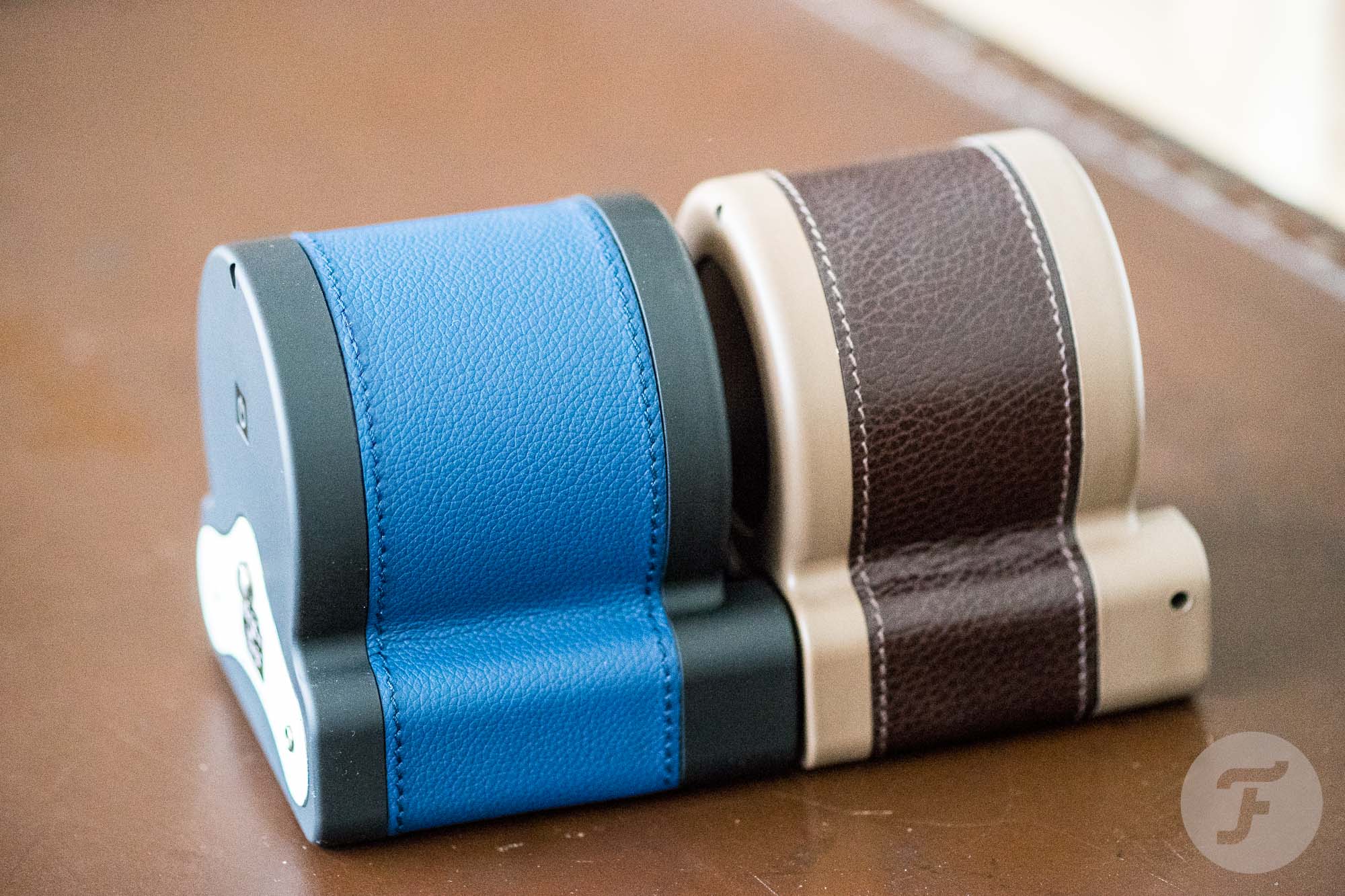 When SwissKubik bought Scatola del Tempo they didn’t only change the outside but the motor too. Earlier the Rotor-One had a German winding system. That is now replaced with SwissKubik’s engine. As the name suggests, it’s Swiss Made, ultra-quiet without any magnetism. The difference between the old and new motors is around 9 decibels. The new SwissKubik “heart” has 1300 rotations per day in both directions. They also offer three years of battery life provided by two alkaline batteries that are in the case. With a simple screwdriver, you can open the back and change the batteries if need be. The older version also had a little door where you could easily change the batteries, they, however, were not part of the package when you got the winder. Also, you could use an AC adaptor, and the new Rotor-One does not support that. 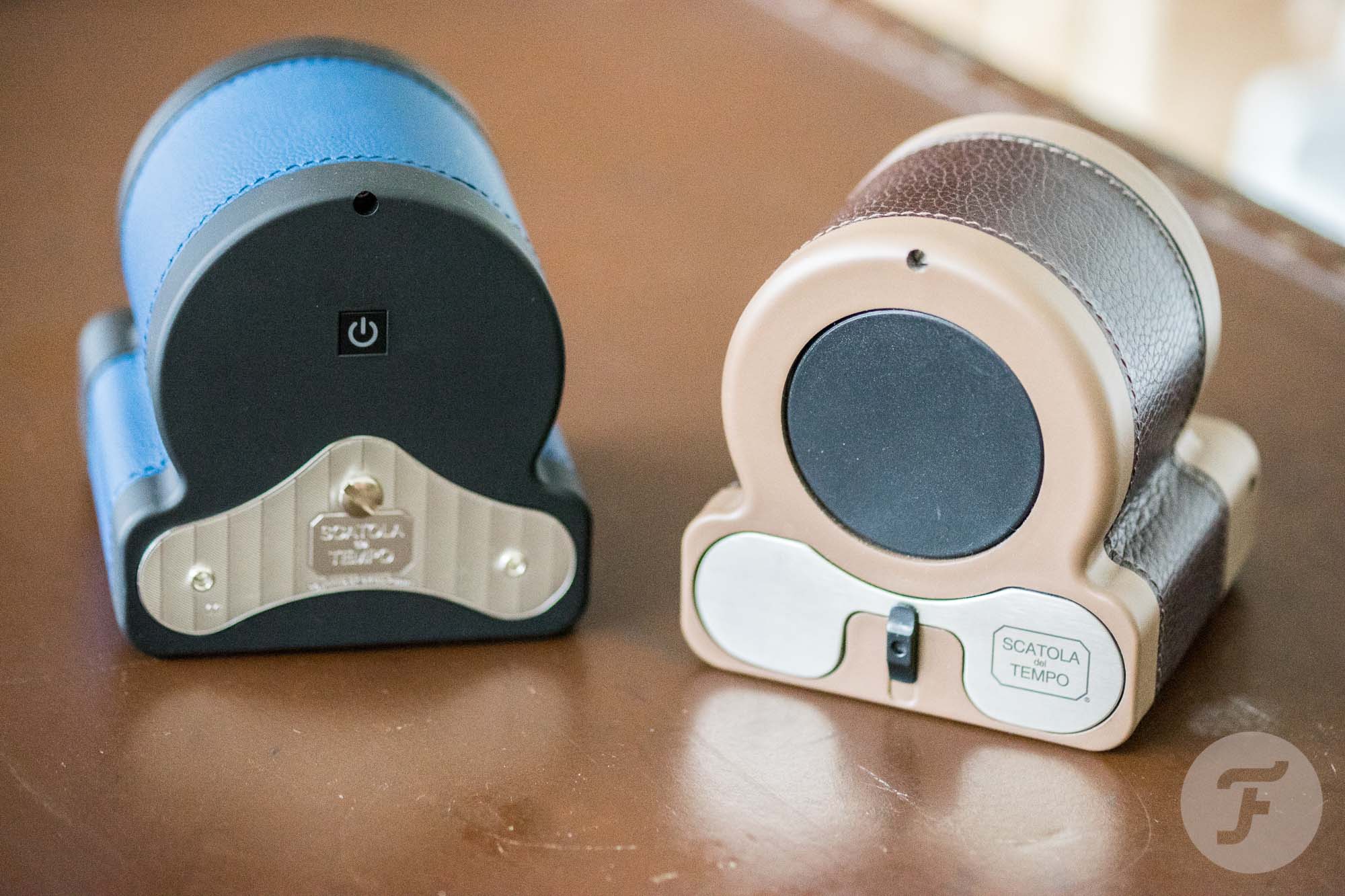 All in all, the Scatola del Tempo Rotor-One is a high-quality item. The case, the leather the box and accessories the overall package has superiority written all over it. That, nevertheless, comes at a price. If you’d like to own the above winder or similar, you’d have to pay €480 and up. For this, you’d get the Rotor-One with a three-year international warranty in the color, leather and cover design of your pick. There’ a small booklet in the box that serves as the manual and the warranty in one. Some will say that a winder only damages your automatic watch. Others love them and have many. Whether you need one or not is a decision you have to make. However, if you decide to get one, you might as well buy a premium brand that is a quality item both in looks and functionality. Like the Rotor-One. 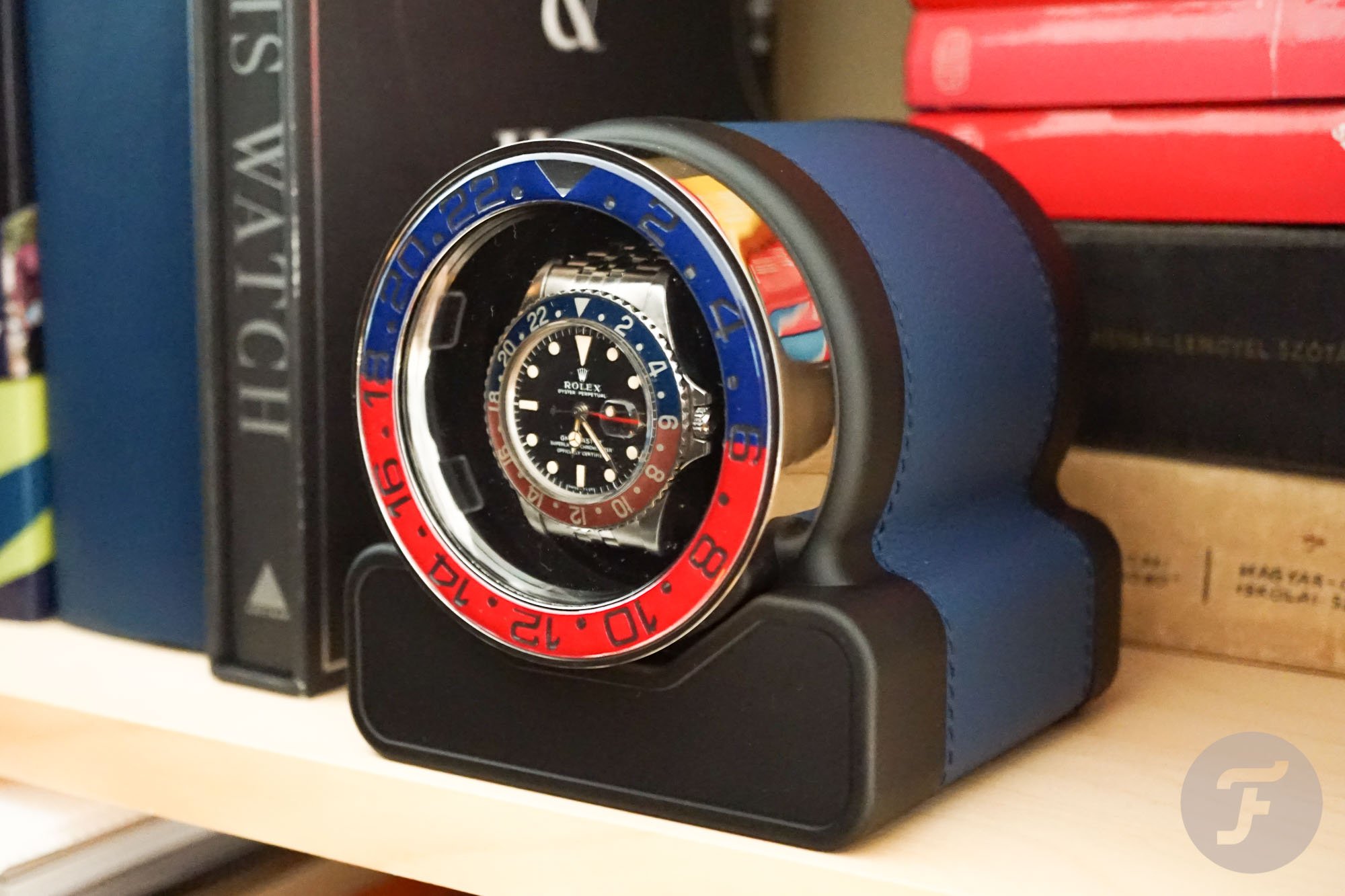 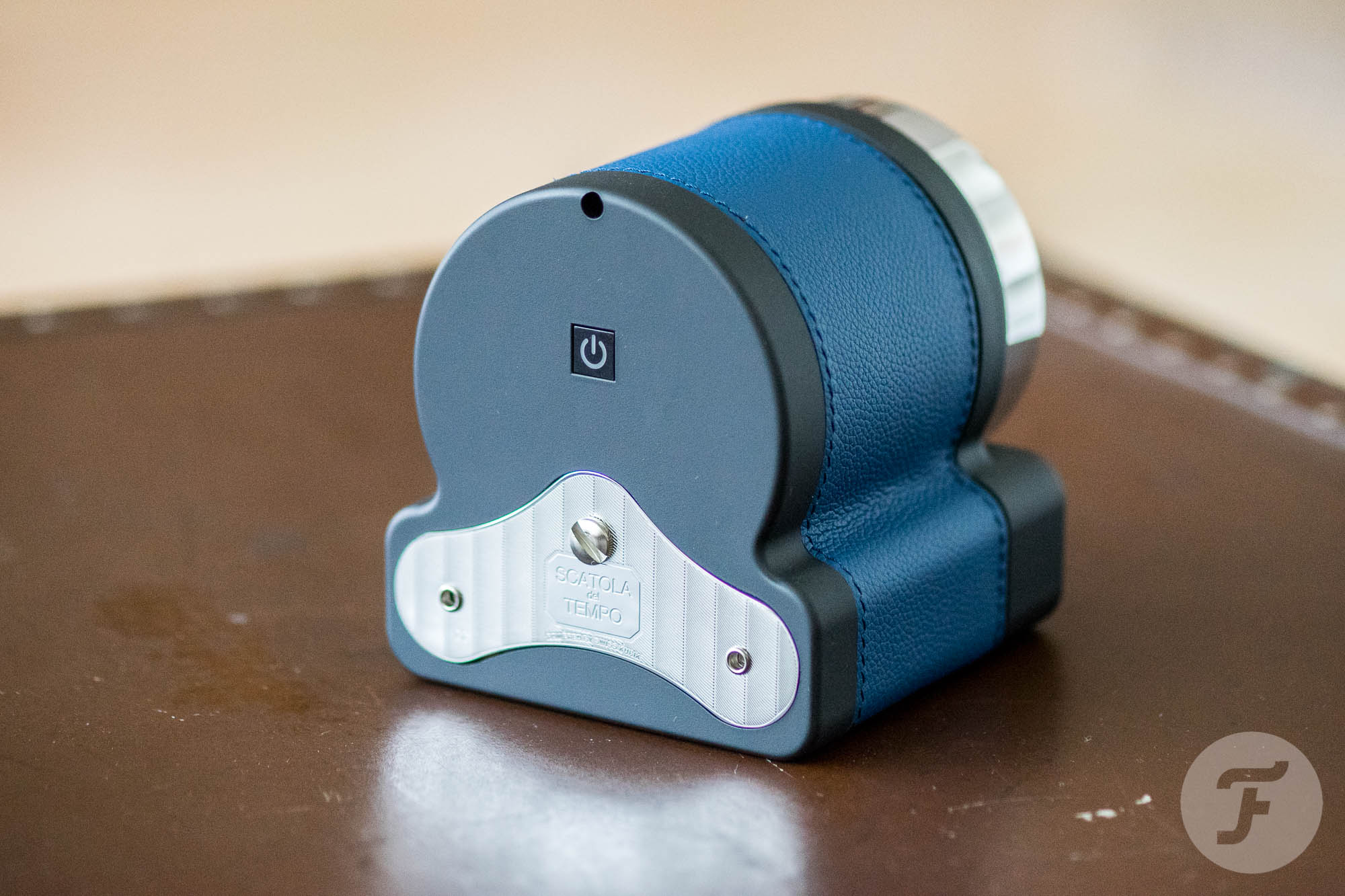 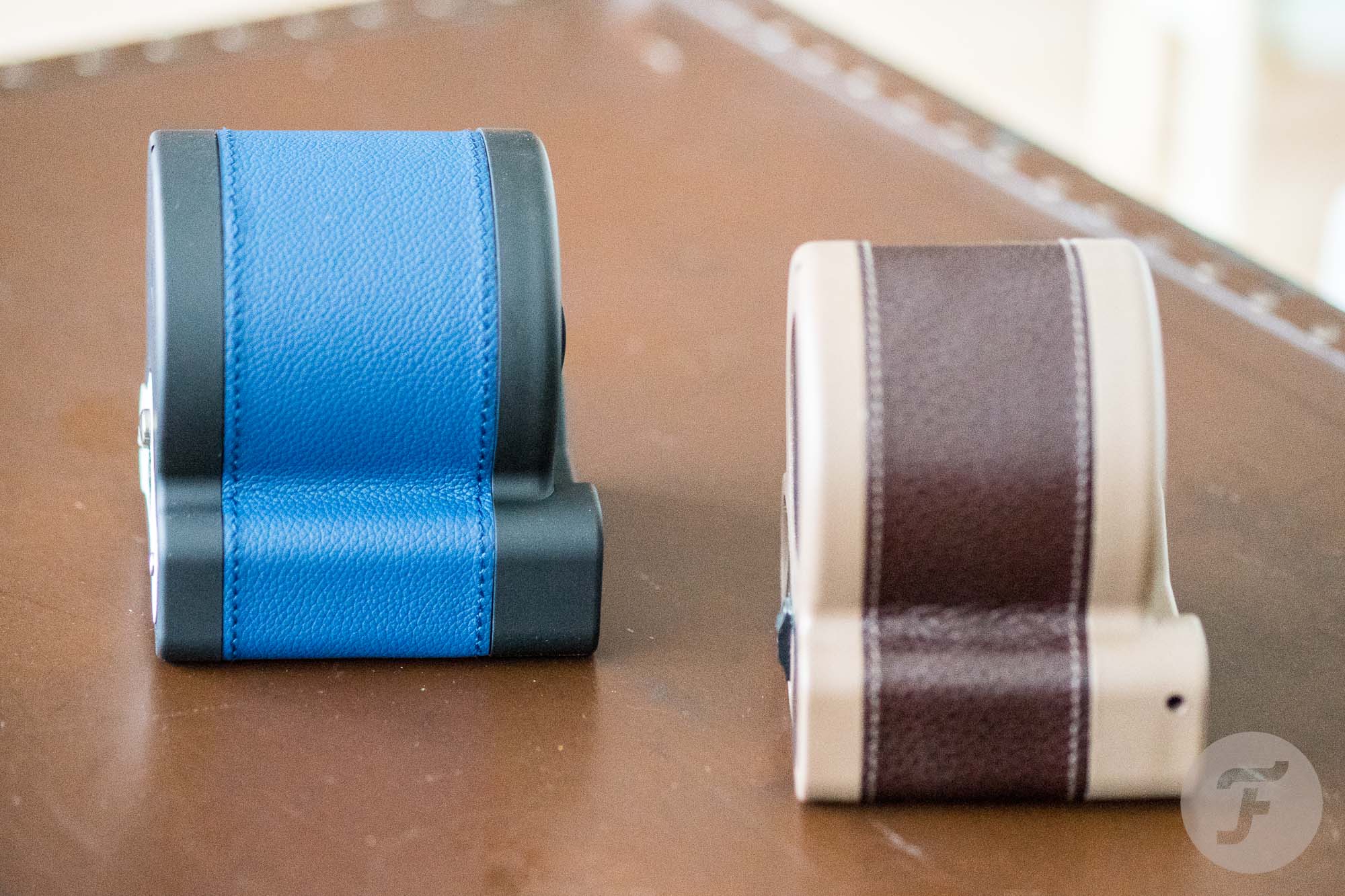 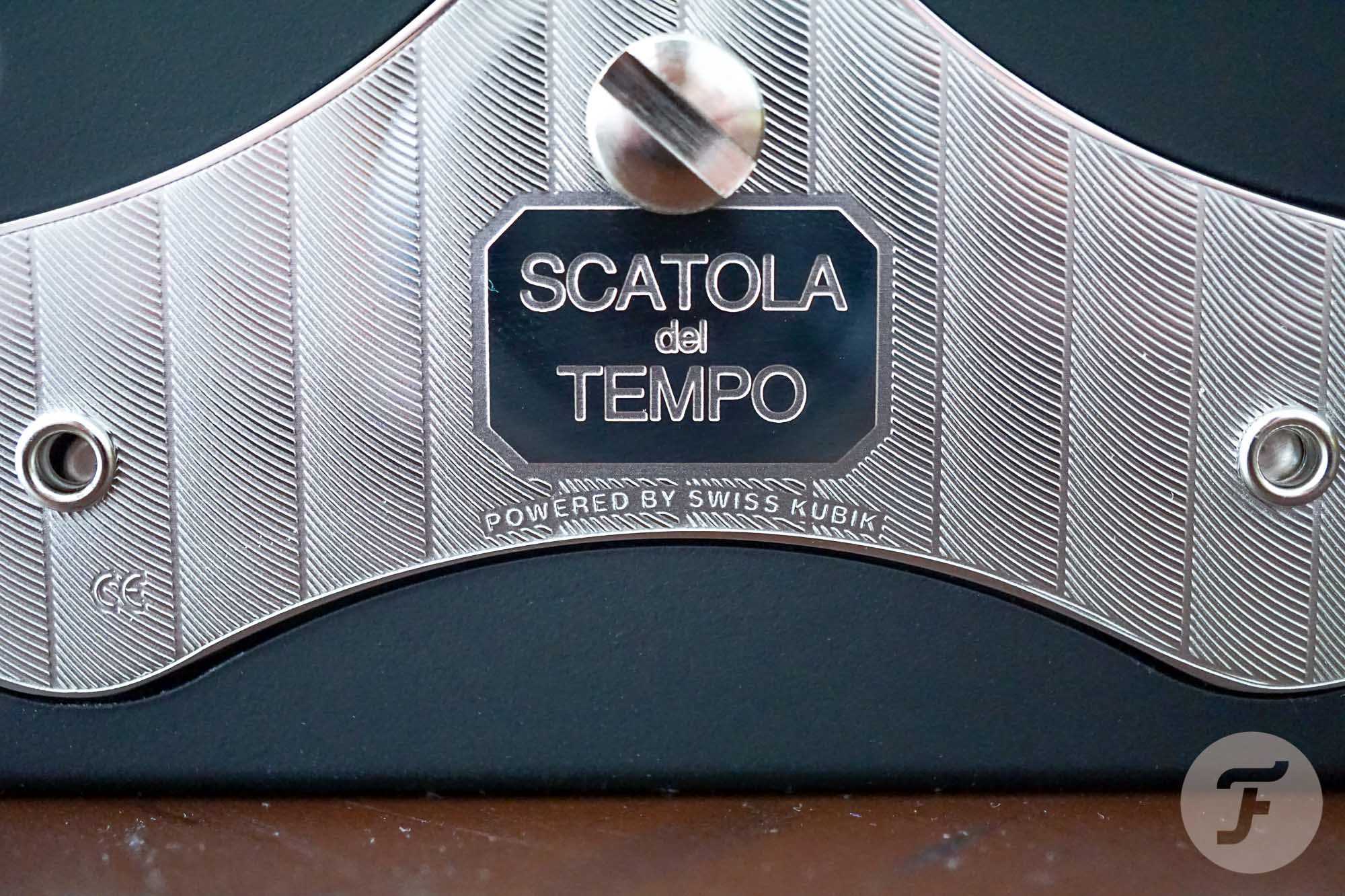 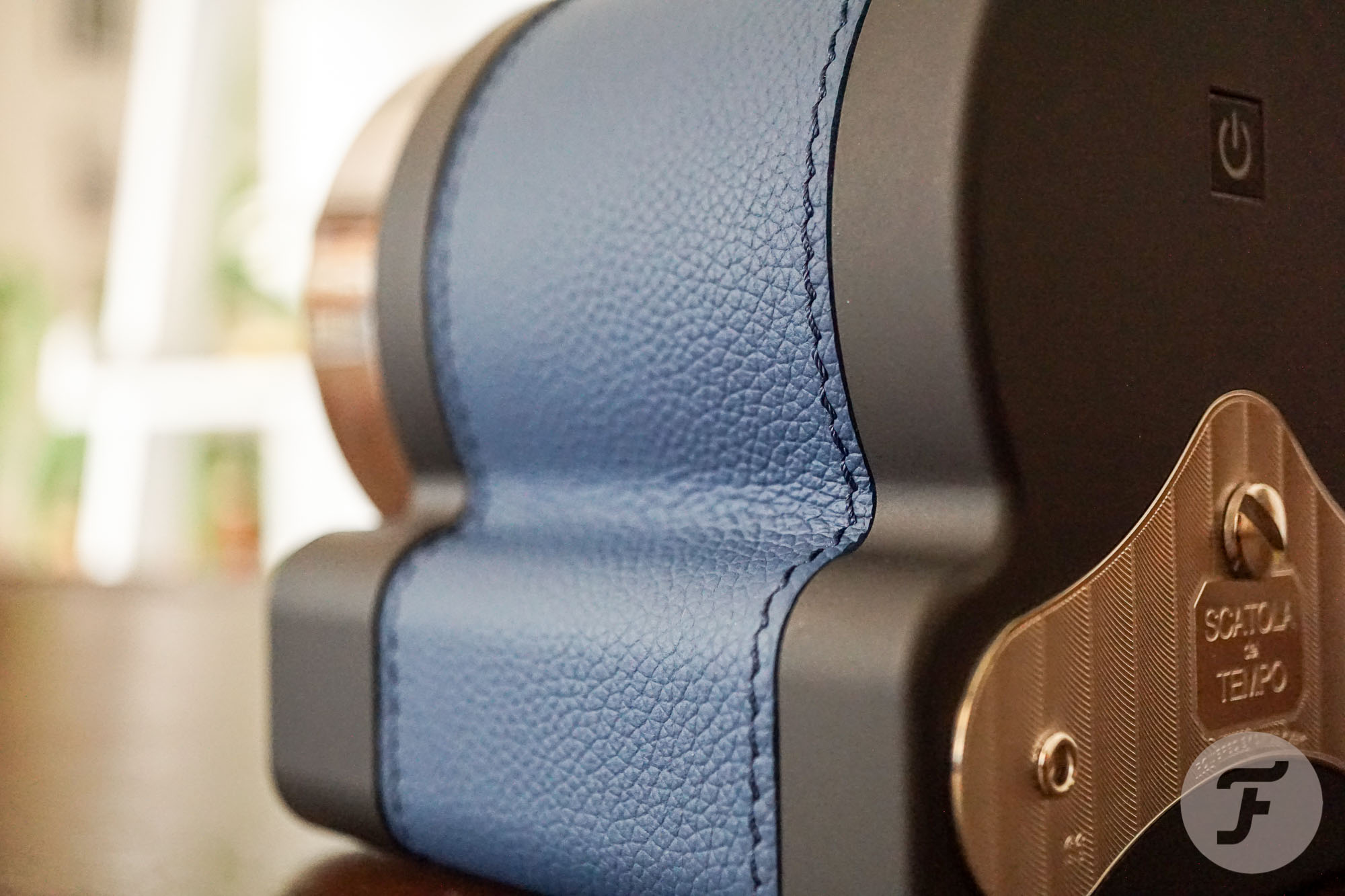