Giles Ellis looks to the Land of the Rising Sun for inspiration and comes away with bucketloads of the stuff...
Rob Nudds
comments 6
Share

It’s a well-known fact among the watchmaking community that I’m a Schofield fan-boy. Despite this consistent fandom, I always do my best to take a step back from the novelty in question and ask myself how I would feel if I were coming to this brand cold? My relationship with Schofield started when I was at the British School of Watchmaking. Giles Ellis, the brand’s founder, had blazed a trail I wanted to follow. As such, my connection to the brand is very emotional and knotted up with my own personal history. Putting that to one side as best as I can, however, I can say right off the bat that I think the latest addition to the Beater family might just be the brand’s best yet. And here’s why…

Schofield is all about design and execution. As with most good design, there’s not a huge amount going, but what is going on is really, really happening. A frequent criticism from some portions of the watch community is that the movements used by brands “like” this don’t match up with their asking prices. While there is a time and a place for that argument (where perhaps the movement is the selling point of the watch and not a very good one), this is not it. Good design costs a lot of money. Excellent execution can break the bank. We see examples of it frequently on these pages and, ironically, the brands I’m about to use as examples are three of my favorites in the industry. 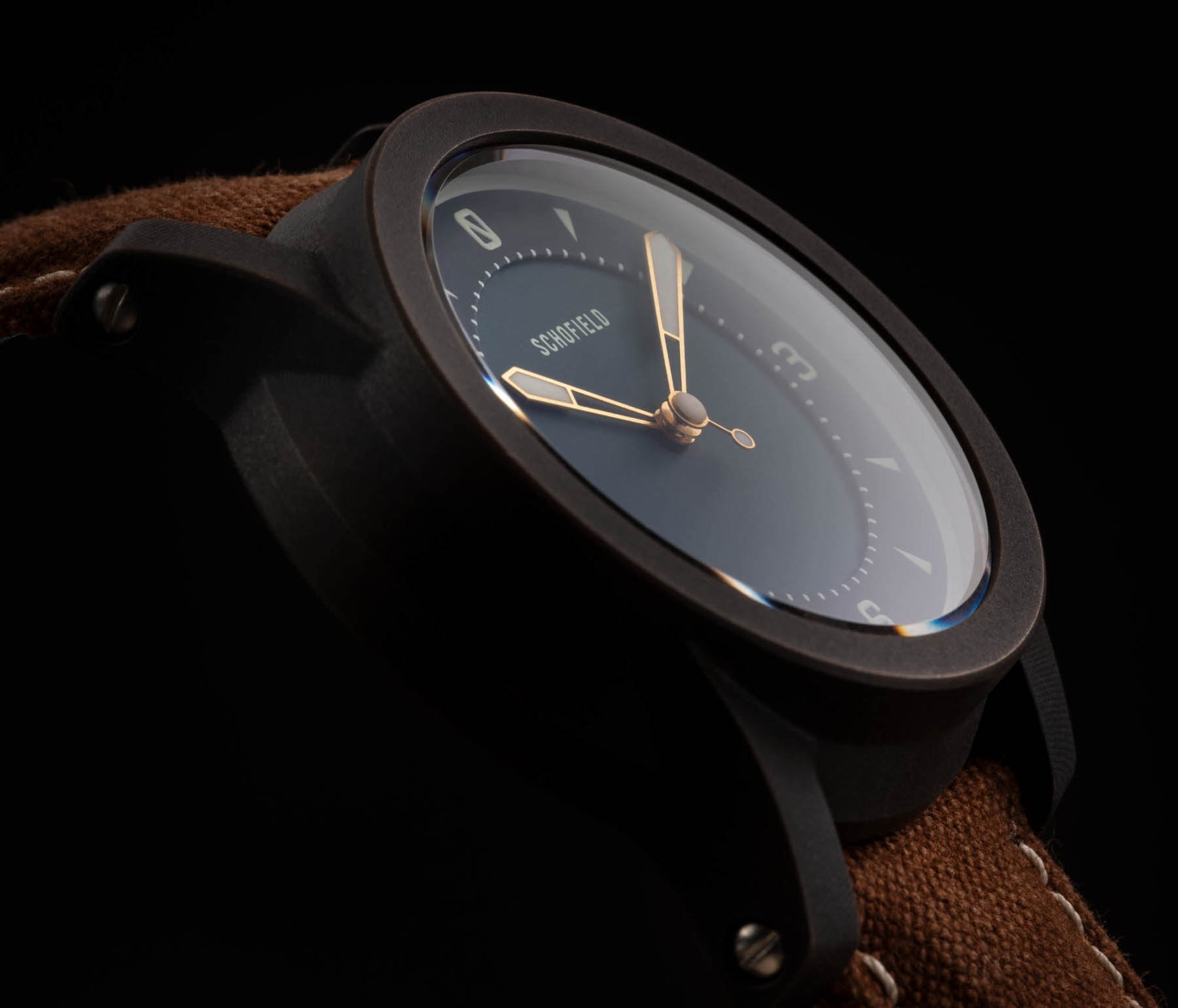 Remember what you’re paying for

In March, we collaborated with Japanese brand Minase on my first attempt at watch design for Fratello. That Minase watch retailed in the region of €5,000 and it was powered by a Sellita movement. And yet, thanks to its bafflingly complicated case and bracelet construction, hand-decorated dial, and ubiquitous Zaratsu finishing, it is hardly a stretch.

Last month, I reported on the release of the latest Laventure (that sold out in about two minutes if you were wondering). Laventure gets a lot of stick for the movements it uses in watches that are creeping up toward the 5K mark. And although I’ve been (wrongly) accused of being on the brand’s payroll in the past, I had no choice but to raise that point in my release article. Why did I feel like it was time to talk about that issue? Simply because the prices for that brand have risen quite noticeably since its first release and I feel the brakes need to be pumped on that front for the good of the brand’s rep. Conversely, Schofield’s prices have (with the exception of the 10K Blacklamp) remained remarkably constant since its debut and have even gone down for some novelties when production costs have been lower.

The true value is hard to appreciate from the spec sheet, but incredibly easy to see on the wrist.

However, the truth of the matter regarding Laventure is (and this is true whether the brand’s haters like it or not) the execution of those watches is simply divine and the cases and bracelets are machined in a factory responsible for creating some of the industry’s favorite six-figure timepieces. When you realize what goes into those pieces, you realize that even the most recent price of the Marine II (€3,950 excl. VAT) is actually a great deal. Much like Schofield’s wares, the bulk of the work goes on unseen. The true value is hard to appreciate from the spec sheet, but incredibly easy to see on the wrist. And this model, perhaps above all others, offers value in spades. 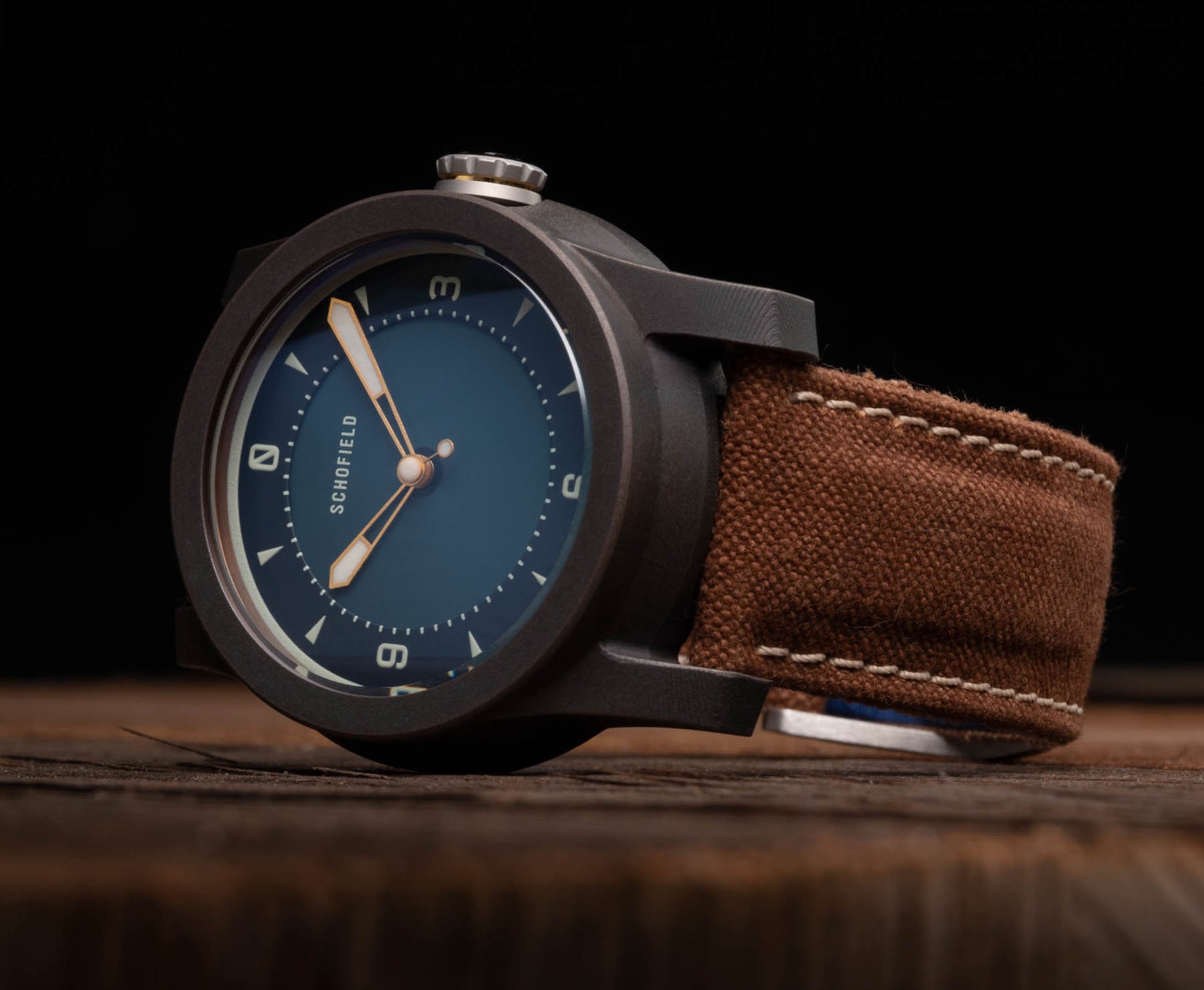 Here we have the latest Schofield model — the Bronze Beater B4 made from Japanese bronze — and it once again puts what Schofield does best front and center. The classic case shape returns and, as with previous beaters, lacks the case band engraving seen in the Strange Lights collection. What is different about this model, however, is the rich, almost inky patination of the bronze. This heavy aging technique has been applied in honor of the respect the Japanese have for the patination of things. Apparently, in Japanese culture, this surface oxidization is referred to as “the grease of life” and celebrated. It’s a concept I love and no surprise to see Ellis bring it to the fore.

Why? Schofield has always experimented with materials in a way that is unusual for a small independent. Not only was the brand one of the earliest (and especially in Britain) to really embrace bronze as a material, the brand has DLC-coatings, blazingly luminous compounds, and Morta (an unusually dense carbon fiber from which the Blacklamp case was machined) in its history. 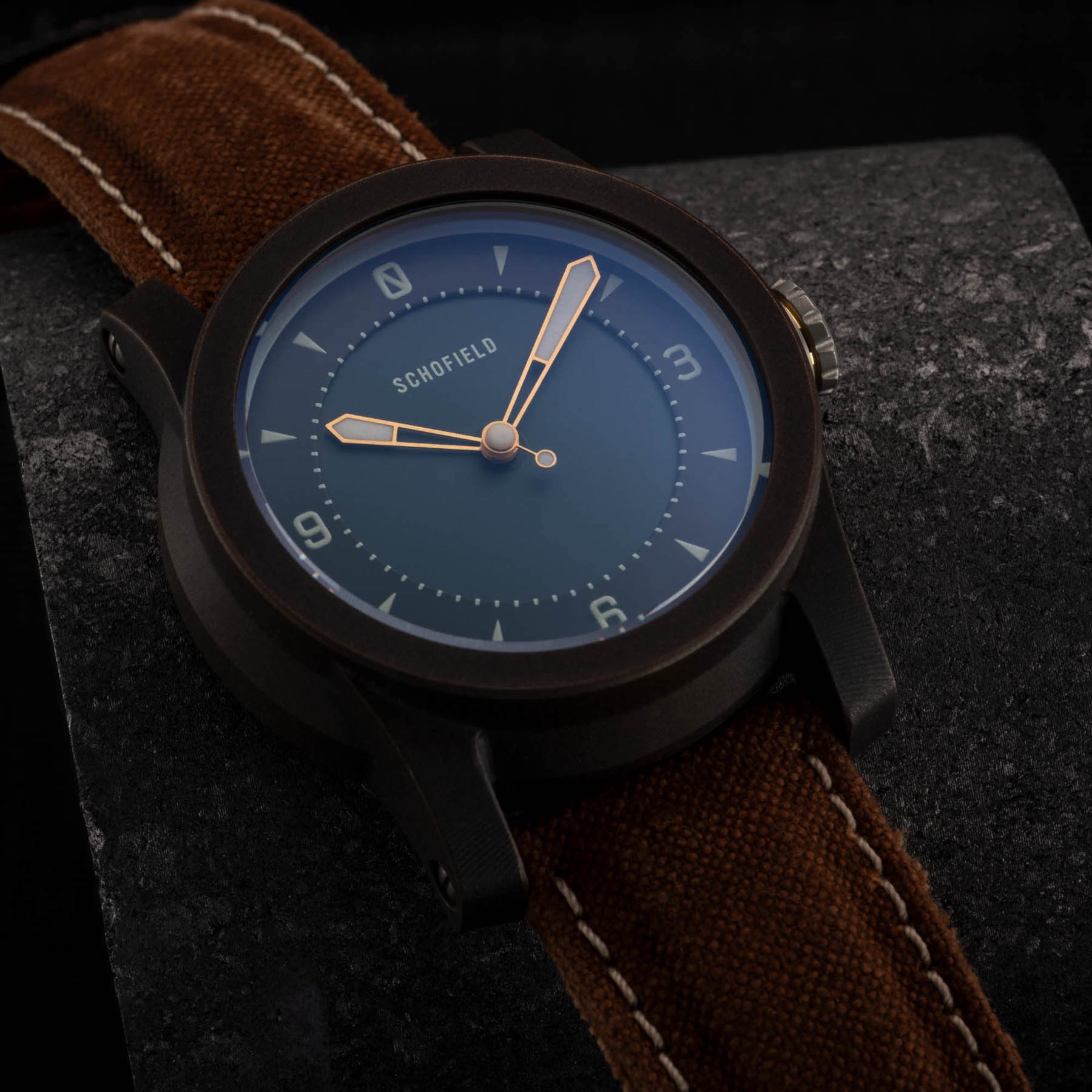 Furthermore, everything surrounding the watches is made from extravagant materials. For example, the watch boxes cost more to make than most price point competitors’ watches, their brass hardware painstakingly sought from odd, forgotten corners of the British Isles and beyond. Straps from almost-defunct mills fitted to buckles coated with bright ceramic for that pop of under-wrist flair can be stored in a sumptuous cloth strap pouch or the latest watch and pen box designed as a display unit by the man that throws everything he has into these small expressions of self. 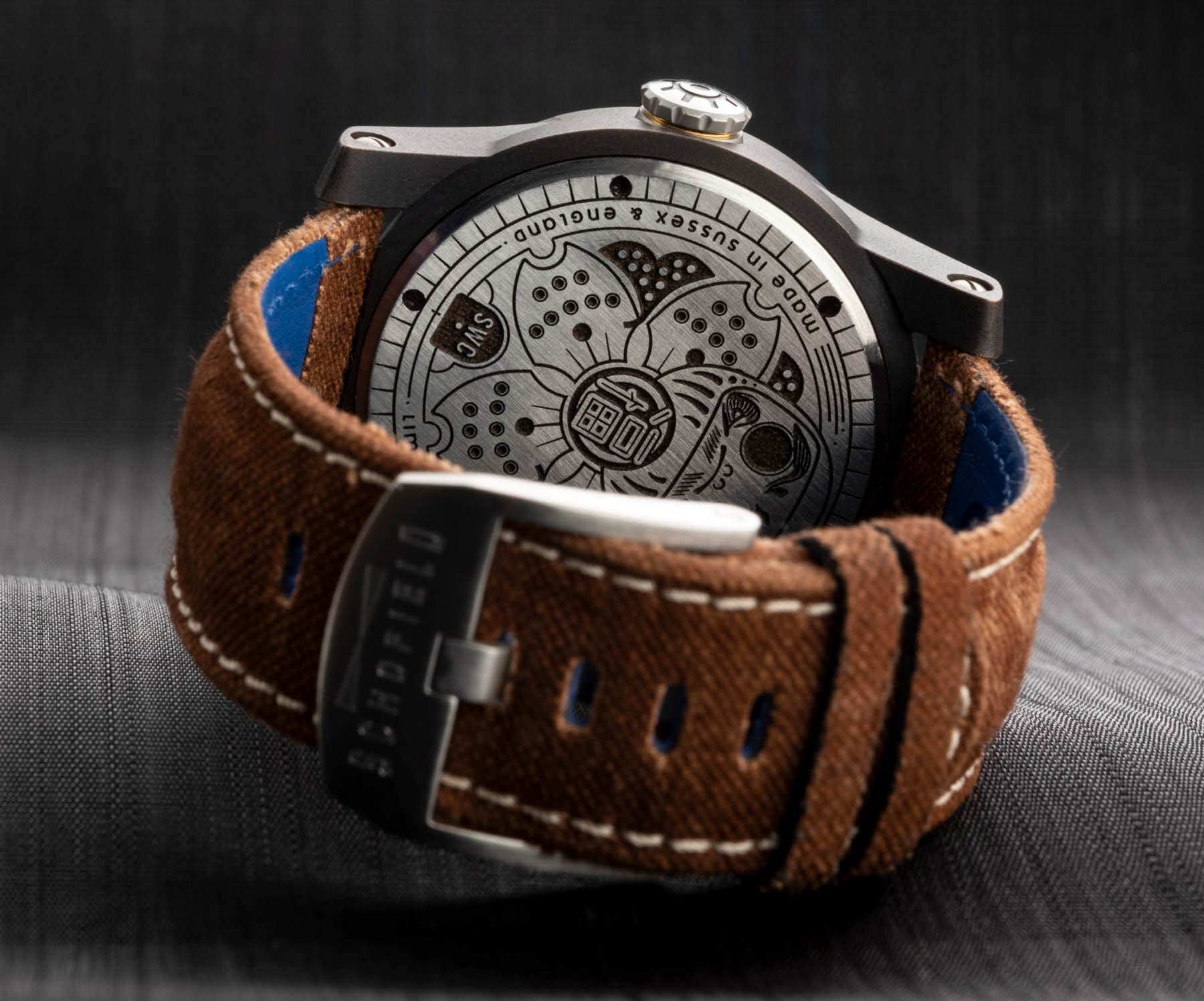 What the specs do tell you

This watch measures 44mm at the base, 42mm across the bezel, and 14.8mm tall not including the lugs (meaning if you stood it on the table it would stand taller than 14.8mm but on your wrist that’s how much vertical real estate it occupies). This model, made from heavily patinated bronze weighs 128 grams on the supplied Japanese Mudcloth strap (but would look awesome on loads of Schofield’s ubiquitous strap options so check them out if the Mudcloth is a sticking point for you). The strap is held between the lugs by titanium screw bars. That’s a weird fact but one I really like because even they have been designed to the nines.

Inside this model is the STP 1-11. I’m quite pleased about this because I don’t actually own any STP movement-powered watches and it makes this proposition a bit more interesting to me than it would if it were powered by a Sellita or my preferred ETA. I’m not saying I’m actually going to factor the movement novelty into my purchase decision but I do rank it as a plus point for that personal reason. 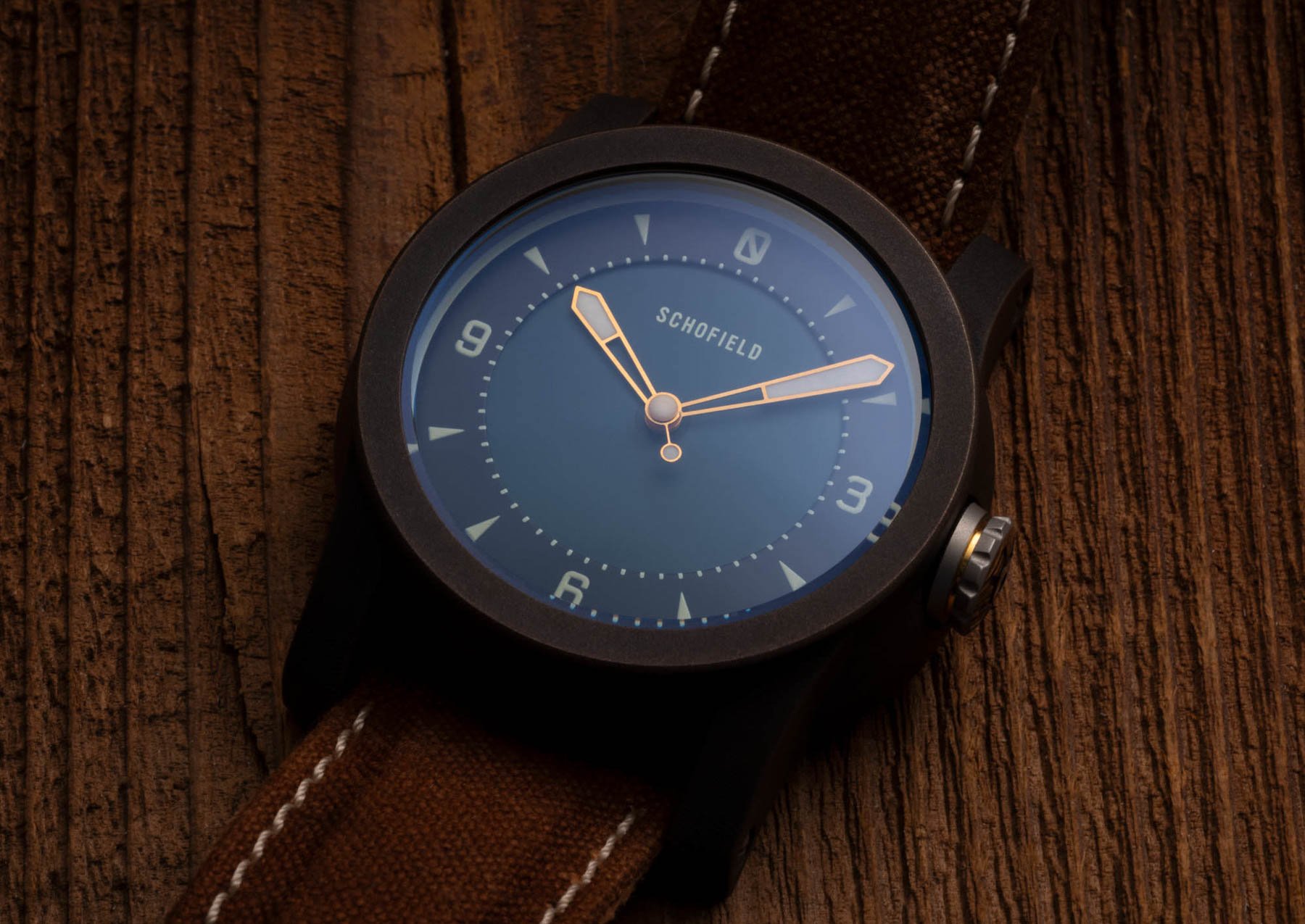 Water-resistant to 200 meters, this watch is suitable for “land and sea”, as the brand used to say so frequently. Dial-wise, the traditional Beater layout is retained but a rich pairing of navy and denim blues make for a serene, mature, and versatile display. Let’s not forget the comparative extravagance of the most recent Schofield release, the Strange Lights collection. Here we have something very palatable indeed, and something that is sure to titillate the night owls among you. In addition to the luminous hour and minute hands, and the “sign ‘o life” seconds indicator, the edge of this Beater dial glows in the dark too thanks to the generous coating of Super-LumiNova C3. 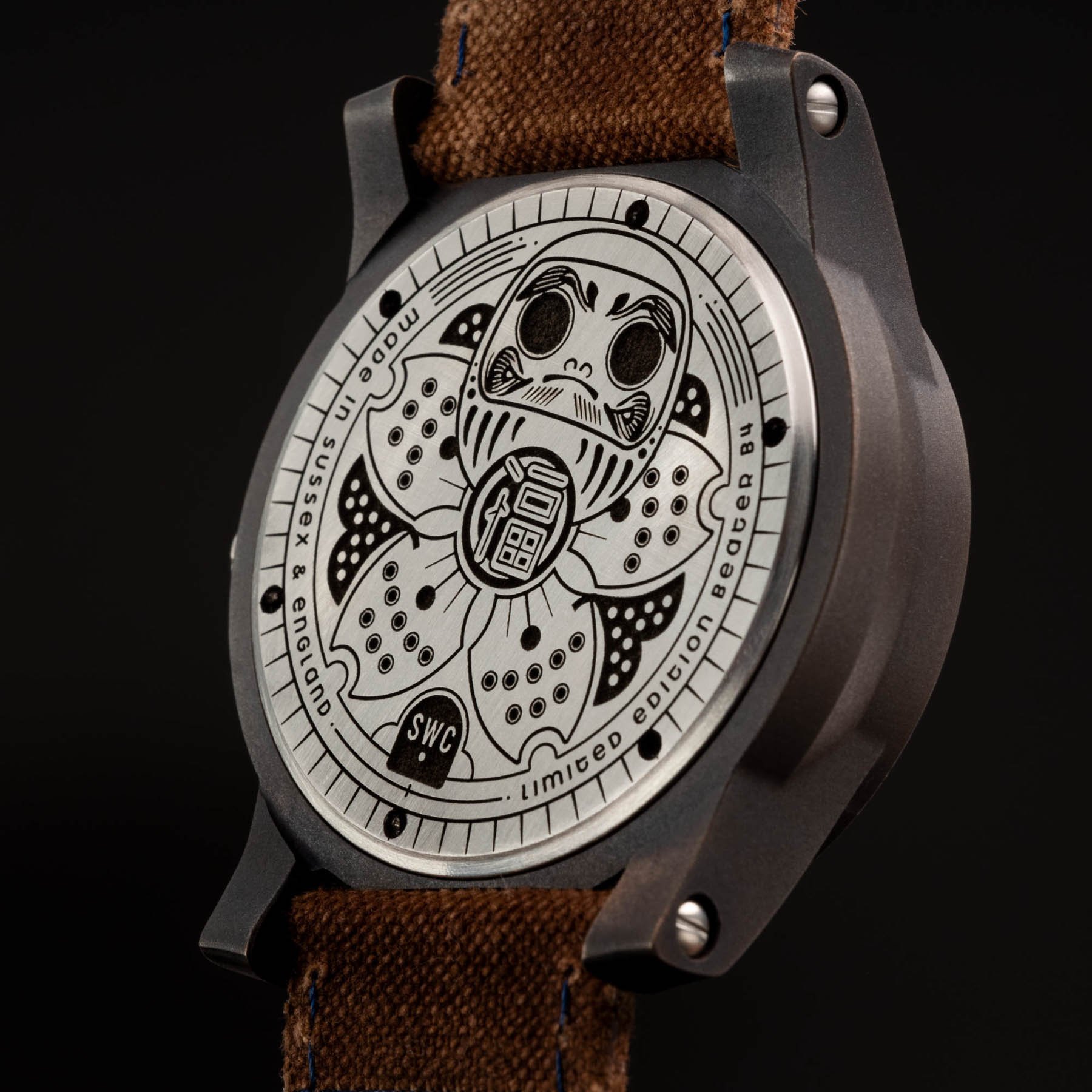 The Daruma doll case back design. The central character means “Luck” and the surrounding motif depicts a cherry blossom.

A case back master

My favorite touches, though? I’ve said it before, but I’ll say it again: I adore this crown. The gold ring works better with this blue dial than any that has gone before it. The muddy color of this case is a divine complement to both. And despite all this to enjoy from the front, how can we ignore the stainless steel case back? Schofield is, in my opinion, the industry leader in case back design. And I’m including all-comers in that. No matter who you throw into the mix, I think the artfulness and playfulness of these closed case back designs would walk away victorious. You can call me crazy if you want, but take a good look at that flair before you do. It’s something quite special indeed.

The Beater B4 is limited to 29 pieces, has a 2-year warranty, comes in a cedar and ash box, and has a retail price of £3,280 (including UK VAT, which many of you will be able to remove). If you’re interested, pick up yours by following this link to more British Watches here.