Seiko’s “The Black Series” is back, now featuring four of the brand’s $1,000+ professional divers. The first three in the new lineup are the Mechanical Diver’s Modern Re-interpretation models SPB253J1, SPB255J1, and SPB257J1. The watches take inspiration from some of Seiko’s classic diver’s watches from 1965, 1968, and 1970 respectively. The fourth and crowning piece is the 1970 Mechanical Diver’s Modern Re-Interpretation SLA061J1, a recent, fully reinterpreted design with Seiko’s caliber 8L35. Who knew that what the world needed was more black and orange? Seiko did.

Seiko has done it again. By done it, I mean the brand has made some radical aesthetic changes to a few established models and succeeded in presenting entirely new watches. I remember a previous run of Seiko’s The Black Series, featuring a solar-powered “Sumo” chronograph diver among other striking re-colorings of Seiko’s standard divers. Again, they were black and orange, but not as much as these newest models. 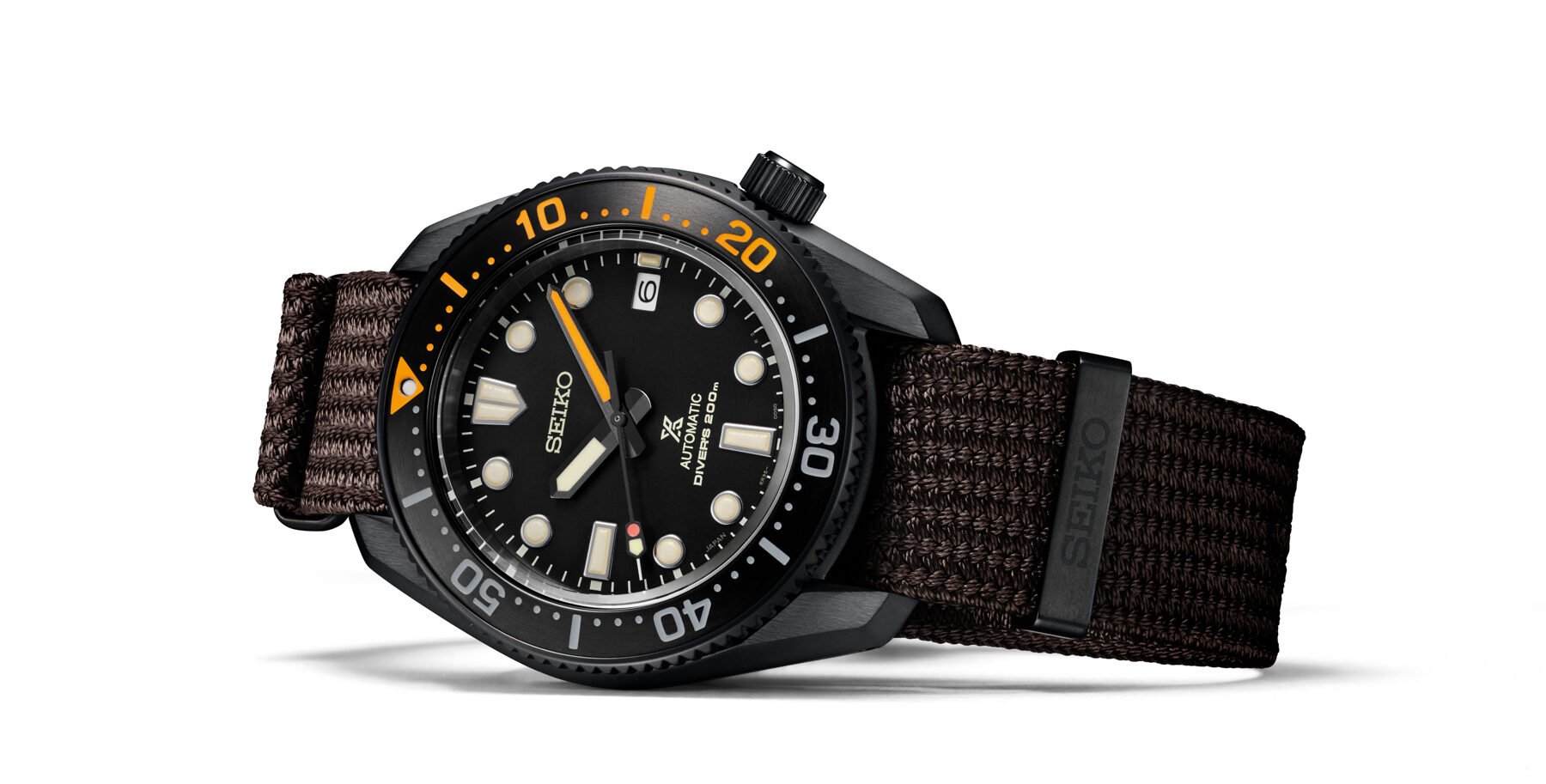 The Black (and Orange) Series

Seiko’s The Black Series diver’s watches embody the feeling of being under the sea at night. Of course, black is for the blackness of night, but orange? Orange, apparently, is for the unique quality artificial light takes under the dark waters. Not being a diver, Seiko’s description of the ocean at night for The Black Series makes me itch to experience the haunting qualities myself. The watches — SPB253J1, SPB255J1, SPB257J1, and SLA061J1 — have me completely convinced; no metaphor is necessary. 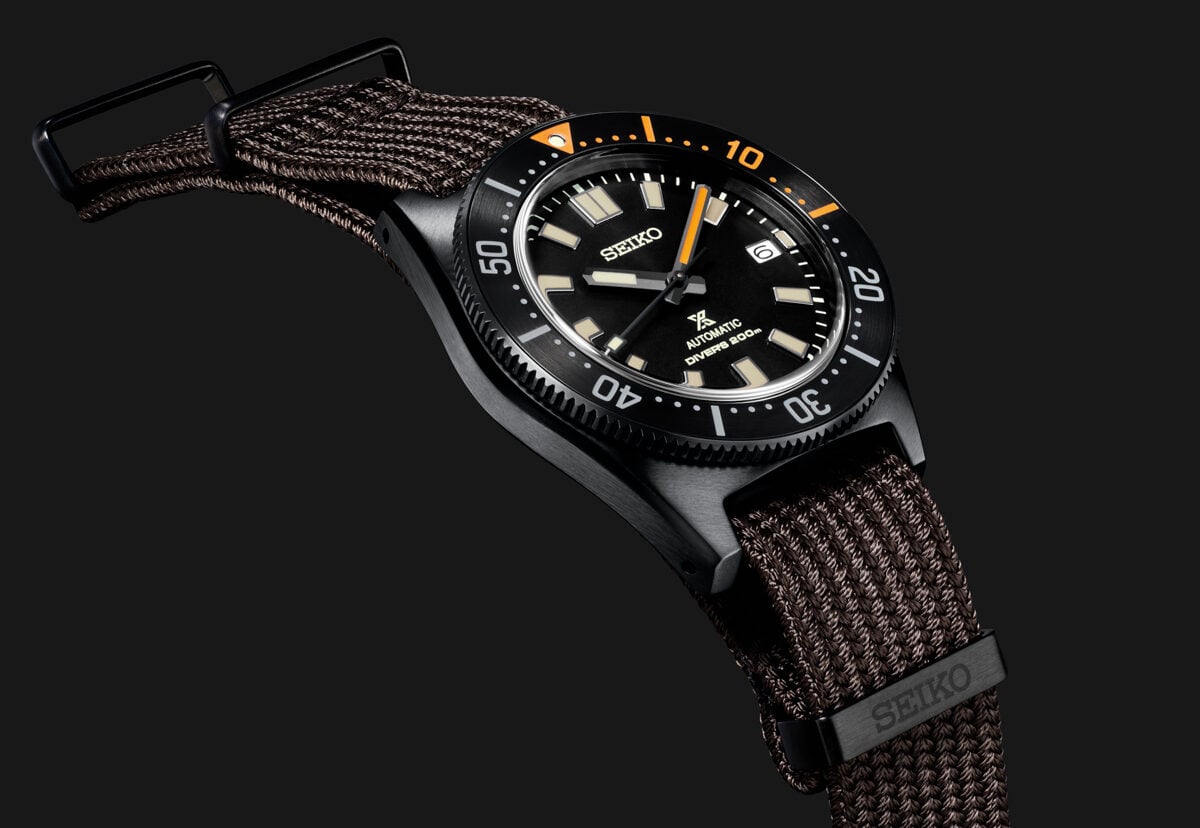 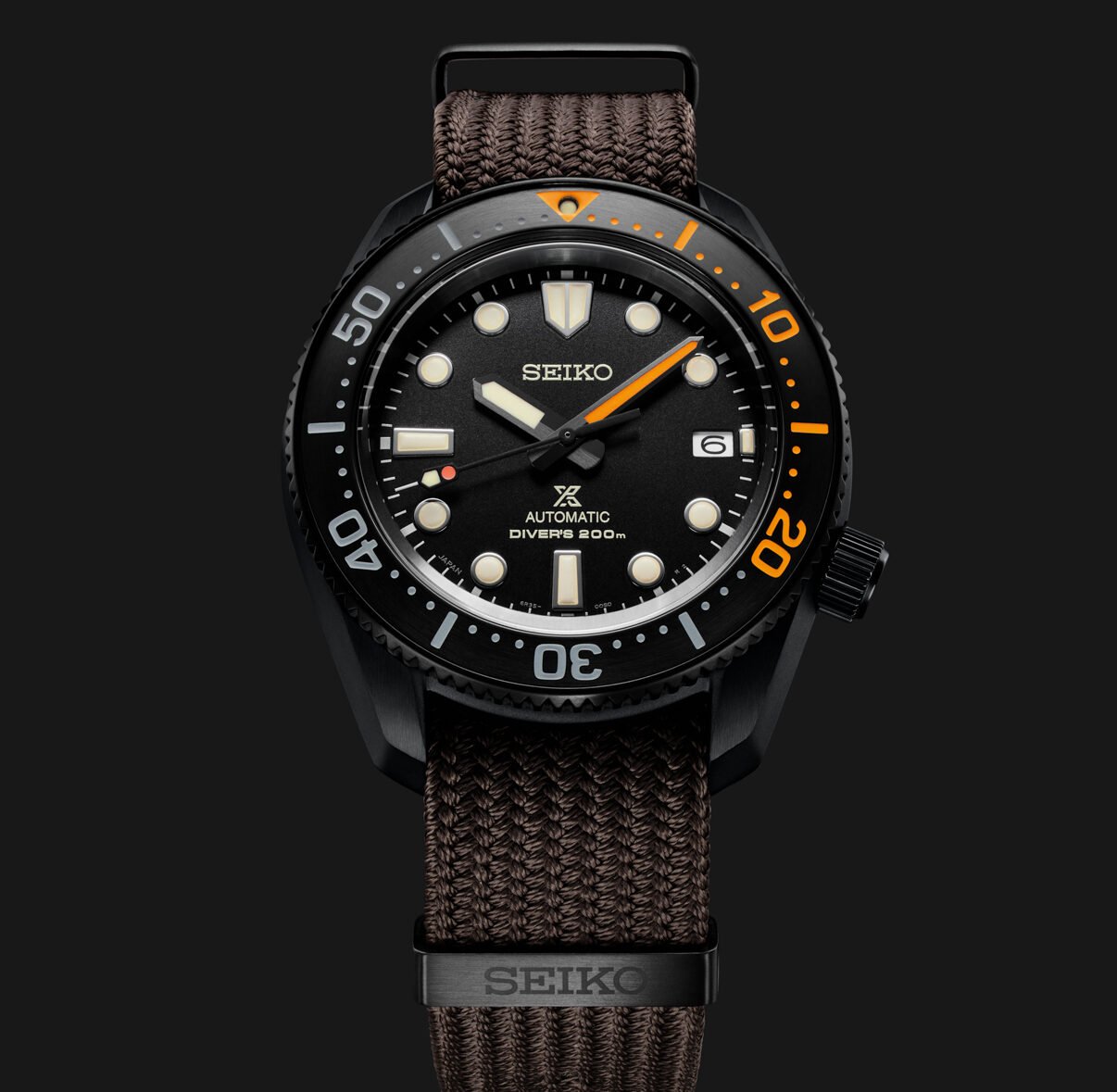 The 1965 Mechanical Diver’s Modern Re-interpretation SPB253J1 — based on Seiko’s 62MAS — is a full skin diver of the times. A static mid-case with minimal beveling, squared lugs, and a 3-o’clock crown provides the “standard” diver look. Its stainless steel case is quite wearable at 40.5mm in diameter. The 1968 Mechanical Diver’s Modern Re-interpretation SPB255J1 descends from the Seiko 6159 diver. Its beveled and swooping 42mm case, angled lugs, and 4-o’clock crown firmly move the model forward in time. The mixture of rectangular and circular hour markers breaks up the dial for higher legibility. 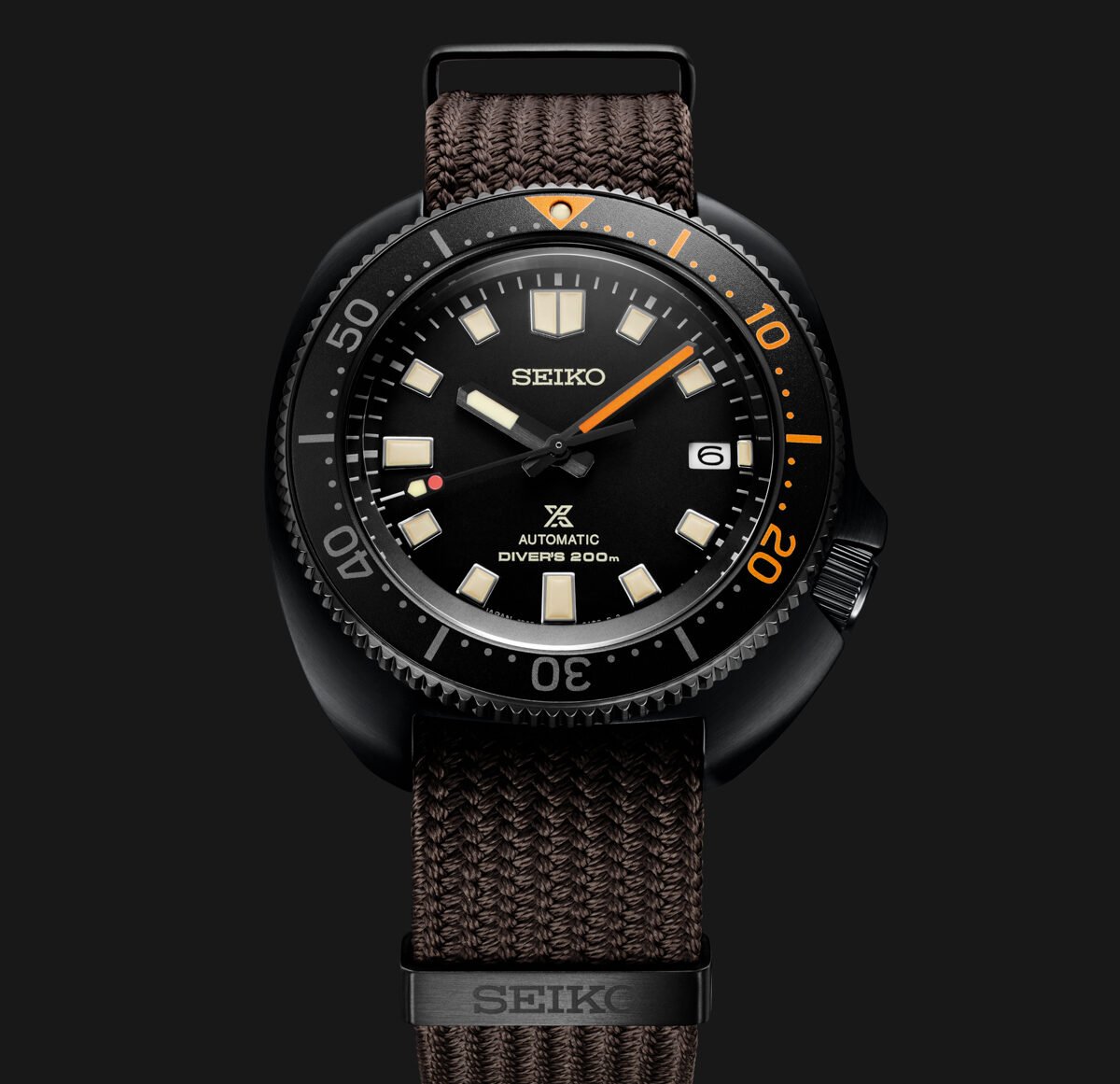 The 1970 Mechanical Diver’s Modern Re-interpretation SPB257J1 is, to me, the most striking release in this series. It’s based on the unique “Willard” 6105 cushion-case diver made popular by Martin Sheen in the movie Apocalypse Now. The case is 42.7mm in diameter, but the unique shape creates a lug-to-lug length of 46.6mm — very manageable, indeed. Both the 6159-based SPB255J1 and the SPB257J1 Willard share the two-tone seconds-hand tip. At first glance, I would’ve liked to have seen the red replaced with orange, but the subtle flash of red complements the orange of the watches quite well. 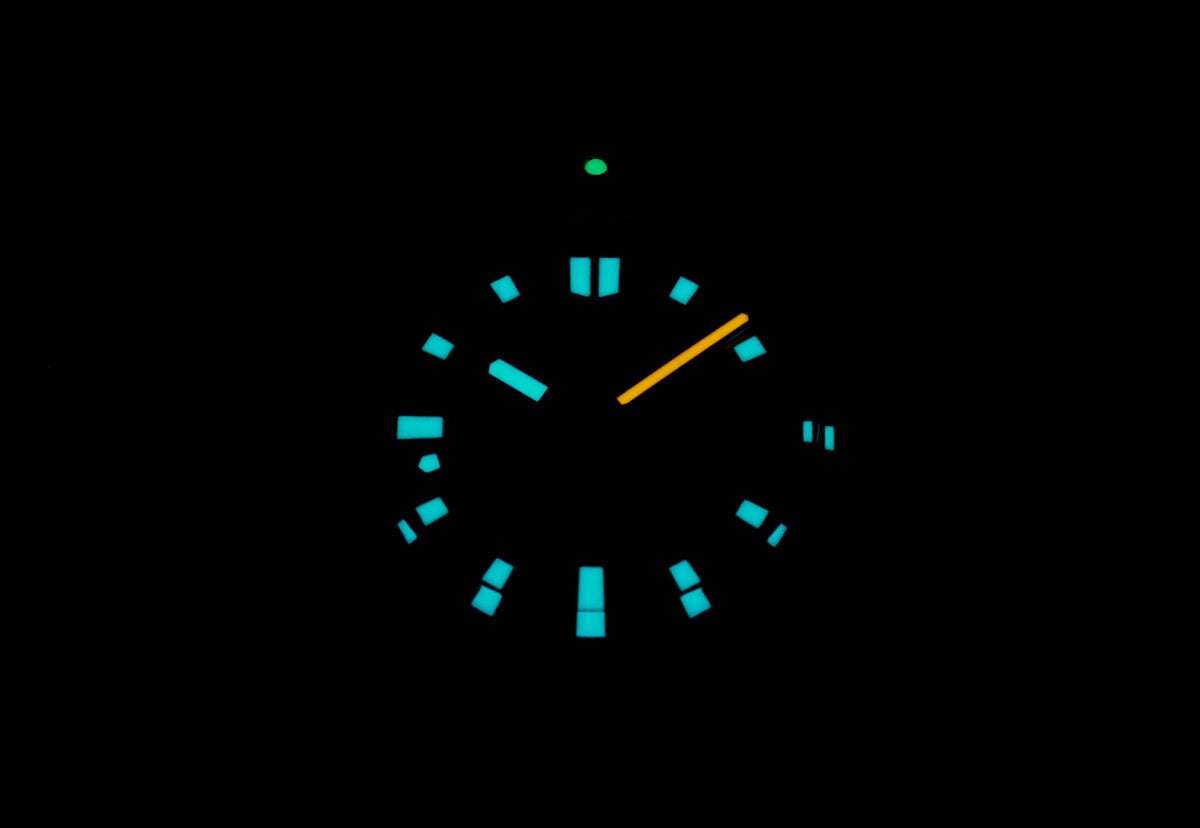 I’ve been drawn to Seiko’s reinterpreted Willard models since their initial release. The case shape is unlike anything else, and I appreciate the simplicity of the dial in combination with such a funky case. However, I personally never thought the naked steel of the case was the right look for it. It’s a funky watch and steel is so austere. Now, in full black and orange livery, I find myself wanting to pull the trigger on the SPB257J1. I don’t think I will, but fun colors with a fun case make for a seriously fun watch. 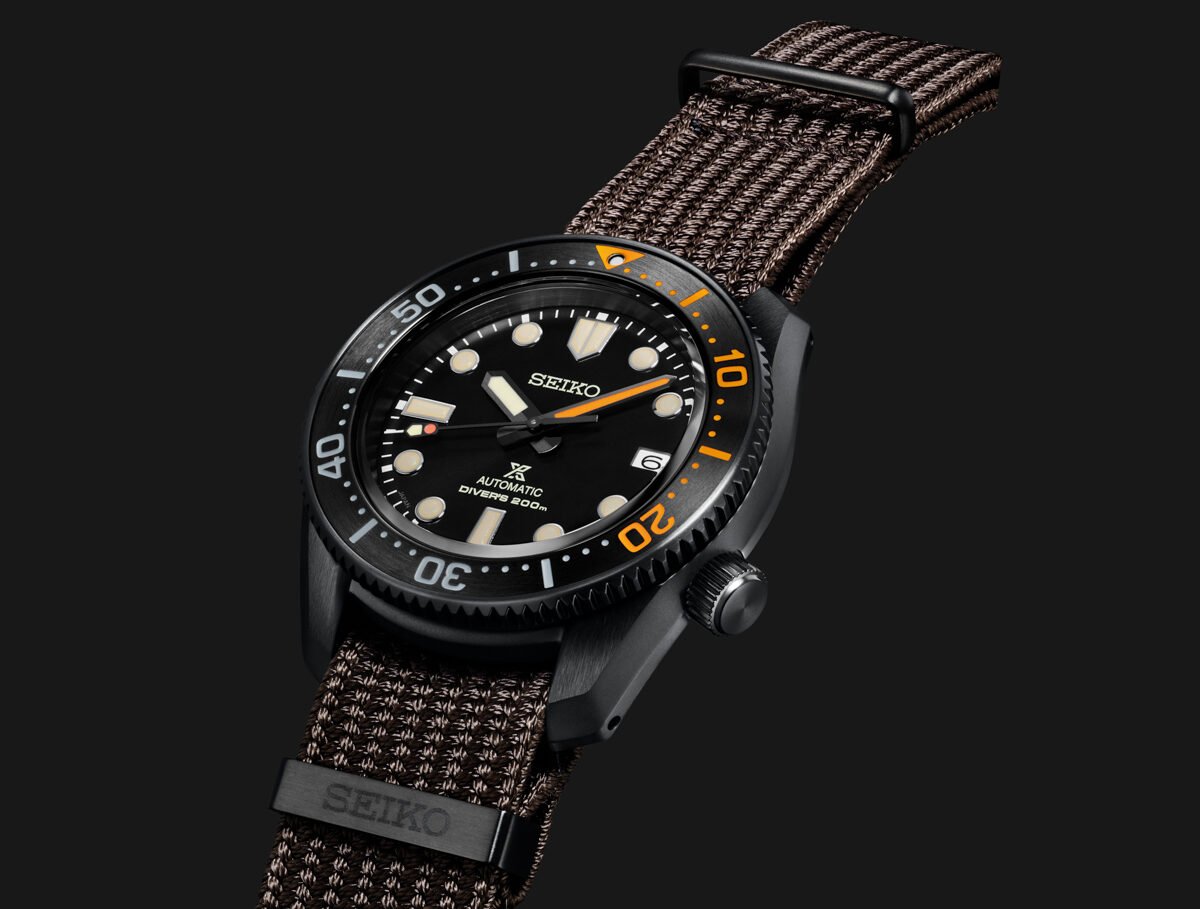 The three models above are all powered by Seiko’s 6R35 caliber. Automatic winding, a 70-hour power reserve, a 21,600vph frequency, and accuracy of +25/-15 seconds per day make this Seiko’s prominent mid-range workhorse movement. Each comes on a dark brown fabric strap braided in the traditional Japanese Seichu style. The brown suggests the idea of black gone tropical, which goes hand in hand with the light “fauxtina” of the lume on the hour hand and indices. The deep brown color and texture of the strap do an excellent job of framing and softening the sharpness of the black and orange of the watch. A black silicone strap is also included for a more uniform appearance. 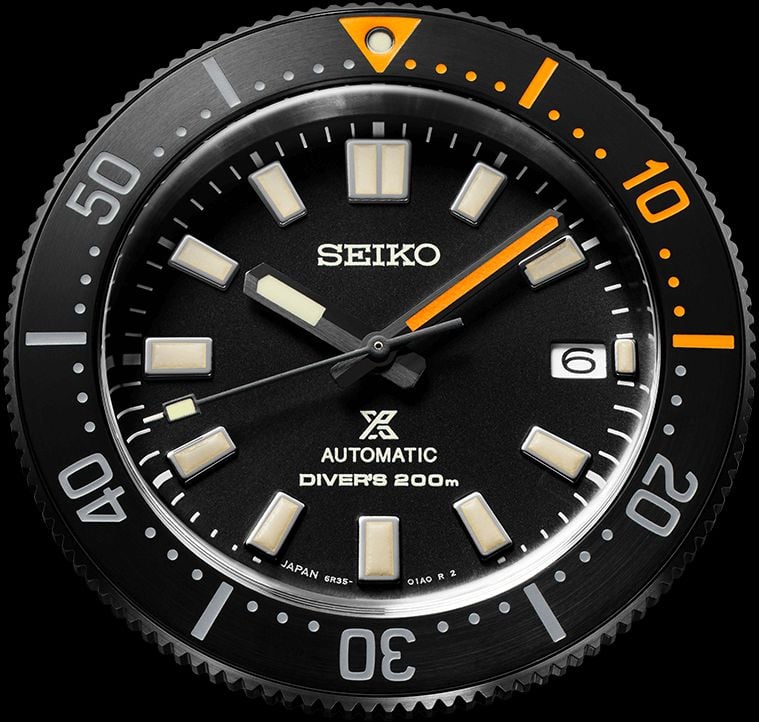 And how about that orange and black?! Seiko has done a few runs of The Black Series in the past, but I don’t believe any of the previous limited editions took the orange to the level it’s at with this series. I very much appreciate the full utilization of the orange on the black. It is at once playful and striking. The minute hand across the models is the true star. It ties in perfectly with the orange highlights of the dive bezel, the function of which is so dependent on the minute hand itself. I appreciate the orange lume used on the hand, contrasting with the teal Lumibrite used everywhere else but the bezel pip, which glows green. That makes for a fun combination of colors, in light or dark. 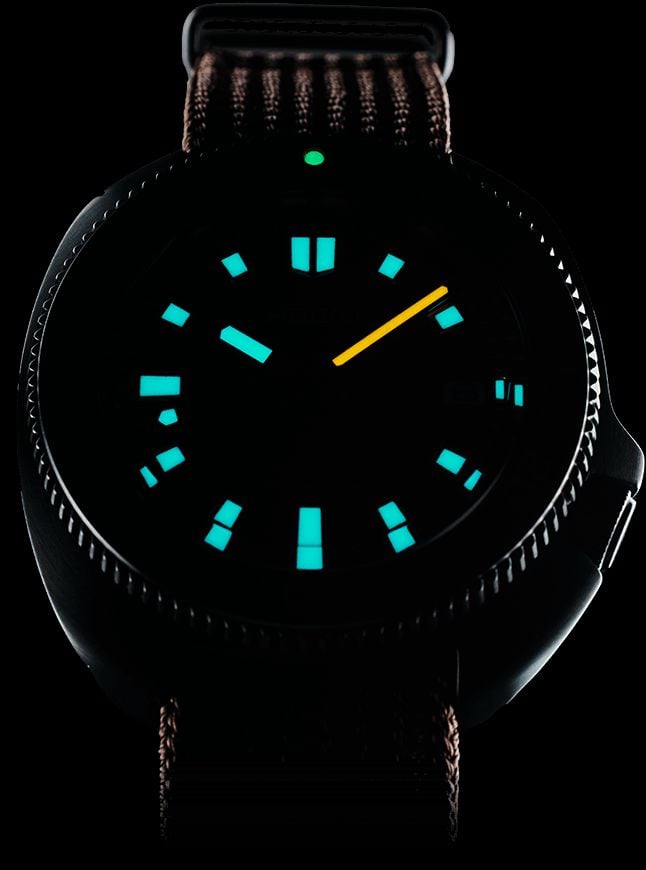 I’d like to give the combination of orange and black the moment it deserves. Here in the United States, the combination of orange and black has been almost entirely relegated to the October holiday of Halloween. Like red and green is for Christmas, any display of the combo elicits thoughts of glowing pumpkins with carved grinning faces and an uncomfortable amount of candy. It’s a shame because it is a striking color pairing that deserves more time in the spotlight than just the month of October. I’m glad Seiko has really ratcheted up the orange with this series. For those of us that keep Halloween alive in our hearts year-round (cough, cough) wearing one of these watches is a subtle (or perhaps not-so-subtle) way to do so. 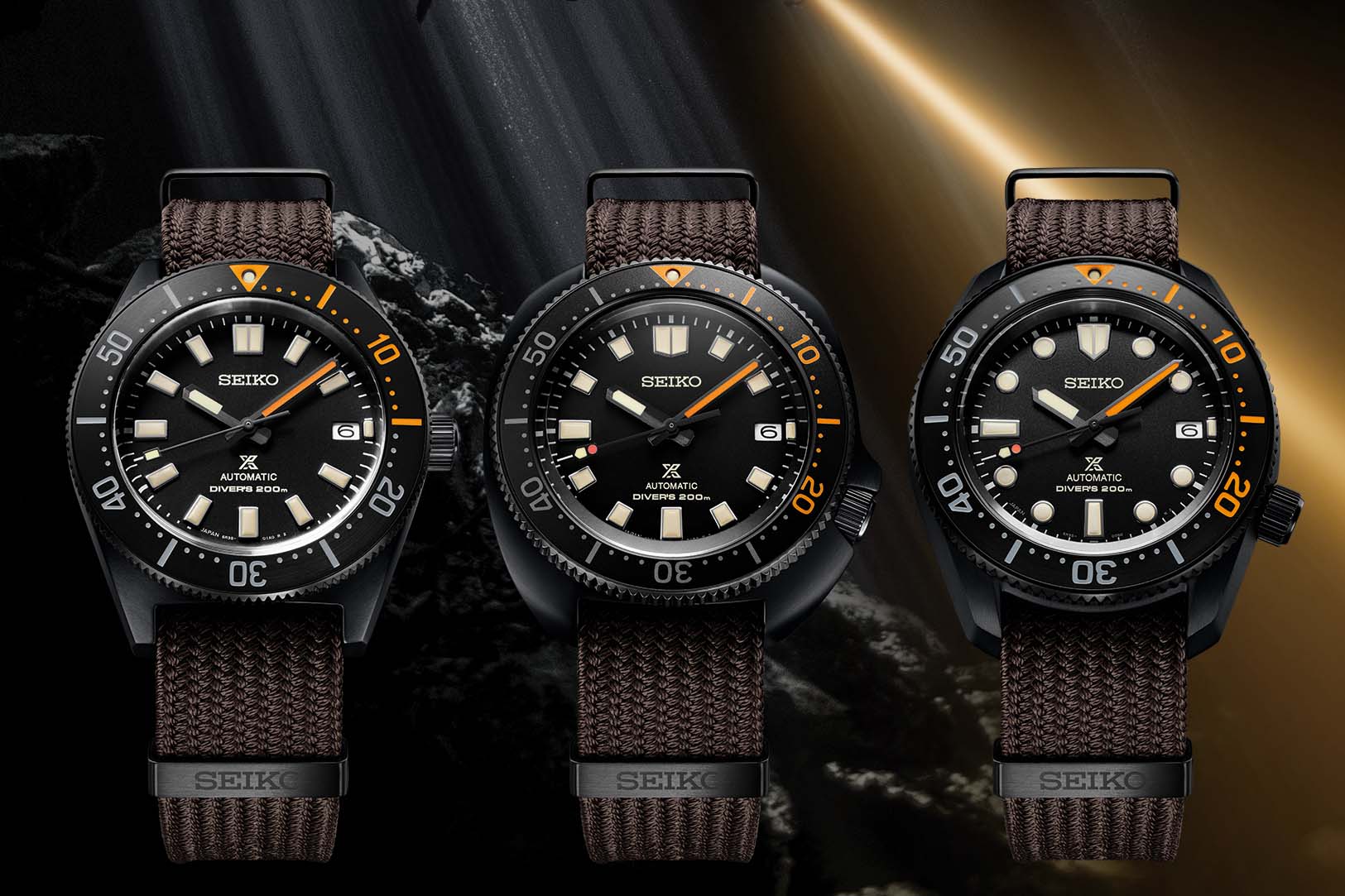 Not so black and white, please

My one gripe with the colors used across these watches — excluding the SLA061J1 which we’re coming to soon — is the inclusion of a white background on the date disc. We lovers of symmetry are still griping over Seiko’s recent awkward addition of lume over the 15-minute mark at 3 o’clock. The bright white right next to it only adds to the eyesore. I would’ve liked to have seen it at least in the same color of ivory as the hour indices. Lumibrite coating would’ve made it *chef’s kiss*. 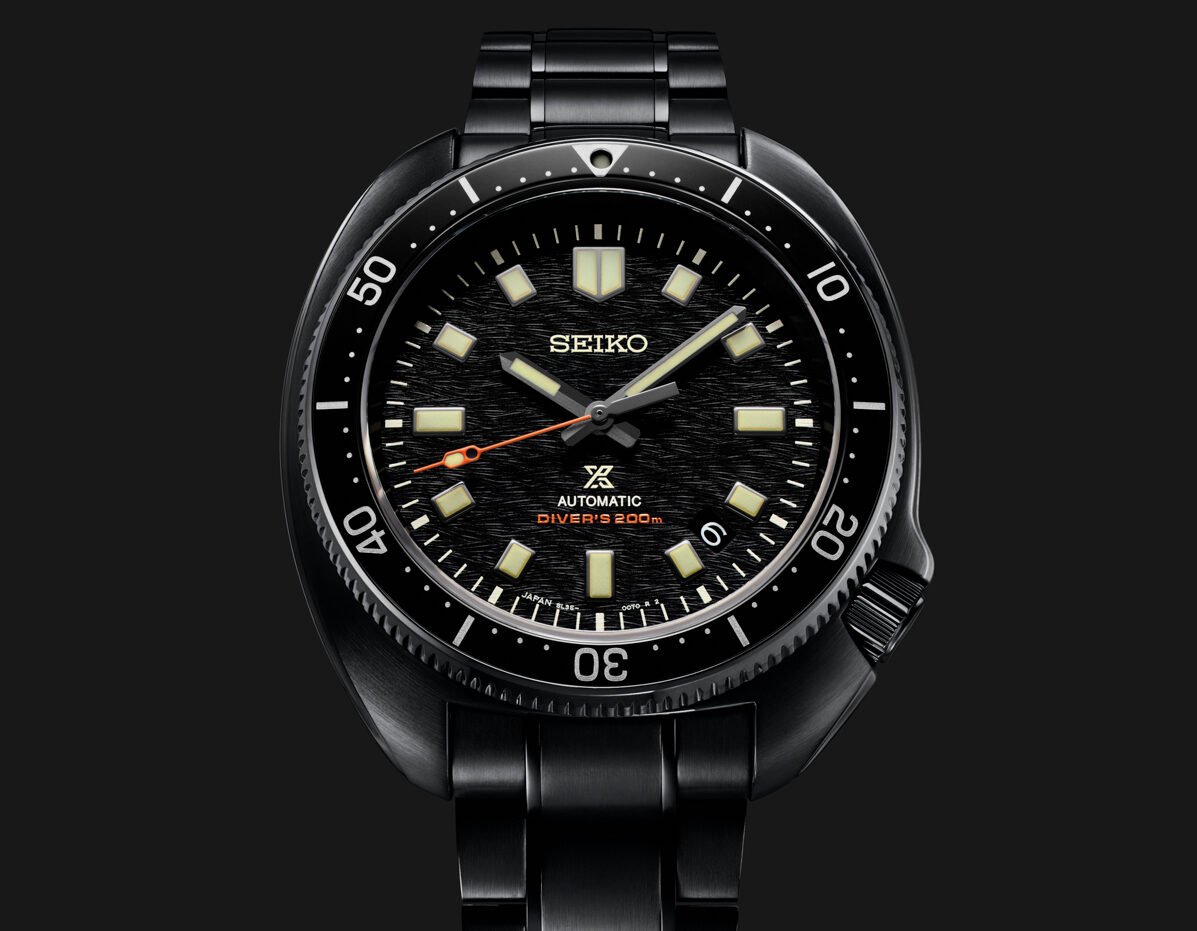 Thankfully lacking in awkward date-background colors is the 1970 Mechanical Diver’s Modern Re-interpretation SLA061J1. Its date display at 4 o’clock is a tasteful black with white lettering. This model is the most refined of this newest version of The Black Series. It’s also — dare I say — the least playful. But that’s all well and good. Its case is Seiko’s truly modern re-interpretation of its cushion diver, somewhere between a Seiko “Turtle” and “Willard”. The matte black in this case is offset by polished sides. That combined with the glossy black bezel insert and textured black dial — supposed to elicit the sandy ocean floor at night — makes this an elegant black watch, with light accents of orange on the seconds hand and “Diver’s 200m” text.

The SLA061J1 forgoes the fabric strap and comes on its own black three-link bracelet with polished accents. The bracelet is in line with its other refined elements, and the watch also comes with an additional silicone strap. The real treat is the 8L35 caliber beating within. This is Seiko’s high-end workhorse movement, initially designed for its premium divers, with a 28,800vph frequency and a 50-hour power reserve. Hand-assembled at Seiko’s facilities in Shizukuishi, it’s also found in the top-of-the-line mechanical “Tunas” and the watch previously known as the Marinemaster.

All of these watches feature a curved sapphire crystal with an anti-reflective coating on the underside. Like the previous watches from The Black Series, each of these models is a limited edition. Only 5,500 each of SPB253J1, SPB255J1, and SPB257J1 will be available. The SLA061J1, however, is limited to 1,000 units. The retail price for SPB253J1 and SPB255J1 is set at $1,200 each, while the SPB257J1 will retail for $1,300. Finally, the SLA061J1, with its hand-assembled caliber and attentive finishing, has a retail price of $3,000. More information can be found at Seiko’s special site for The Black Series here.