Introducing: The New Seiko 5 GMT Series — A Trio Of Must-Have Watches For Beginners And Veterans Alike

Oh boy! If someone had told me back in my early days of watch collecting that I’d get to see what is effectively a GMT version of the Seiko SKX, I would never have believed it. The new Seiko 5 GMT Series takes a form factor known and loved by so many and adds a splash of functionality to it. Personally, I’ve been somewhat hesitant to embrace the new Seiko 5 series as a proper replacement for the SKX. These are not dive watches and are more suited to newcomers to the watch world. That said, I’m also one of the few people who actually will take dive watches diving, and I realize that this makes me part of the minority. Either way, I didn’t have much interest on the line, except for some of the cool limited editions that would pop up from time to time.

That all changes here and now with the release of these three watches. Do I need one? Probably not. Do I want one? Absolutely! Summer is quicky approaching, and a bright, colorful watch with some water resistance and GMT functionality is at the top of my list. The fact that all these characteristics come together in the familiar Seiko SKX case is just the cherry on top. It really feels like a safe bet to say that these are going to be extremely popular. For enthusiasts starting out, as it’s an incredible value proposition from a brilliant brand. For the veterans, it’s an undeniably cool watch with a nostalgic note and also a brilliant carefree option for summer days by the pool. You get the picture! So, without further ado, let’s take a closer look at these three latest Seiko 5 GMT models! 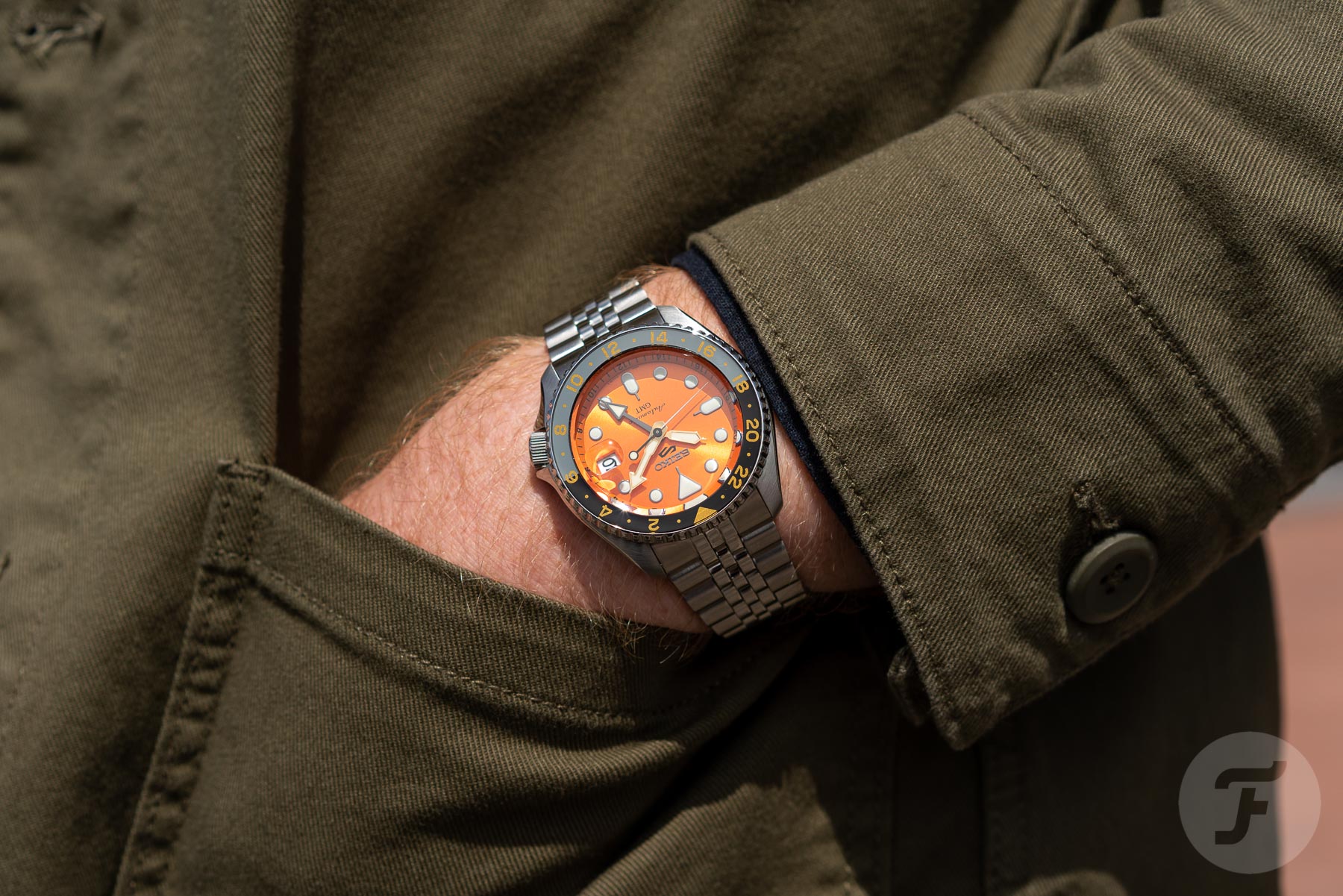 The Seiko 5 line and the SKX

Now, in case you didn’t know already, the Seiko 5 series has been around since 1968 (with its roots in the Seiko Sportsmatic 5 of 1963). The watches included in this line had to meet five specific criteria. They had to have a recessed/protected crown, a robust bracelet or strap plus a shock-resistant movement capable of handling sporty activities, automatic winding, a day/date display, and finally, a decent amount of water resistance. Over time, some of these criteria have been broadened and have become a bit more general. A good example of this is the day/date indication, which is no longer a strict criterion for making the cut. Either way, this was Seiko’s non-professional sports watch line, in which value and quality can still be found today at an affordable price point.

The famous SKX (released in 1996) became a modern icon for Seiko. Owning or having owned an SKX was (and arguably still is) something that most collectors and watch enthusiasts proudly share. However, with 200m of water resistance, the SKX was a proper dive watch. And after its discontinuation only a couple of years ago, calling the wide selection of Seiko 5 models with a similar case “SKXs” doesn’t feel quite right. However, they still offer a value proposition for those looking to step into the world of mechanical watches. Now, with the addition of a GMT feature, these new Seiko 5 GMT Series watches go beyond what I could have hoped for as a budding watch enthusiast all those years ago. And though I’m not a veteran quite yet, I feel pretty excited about this release. 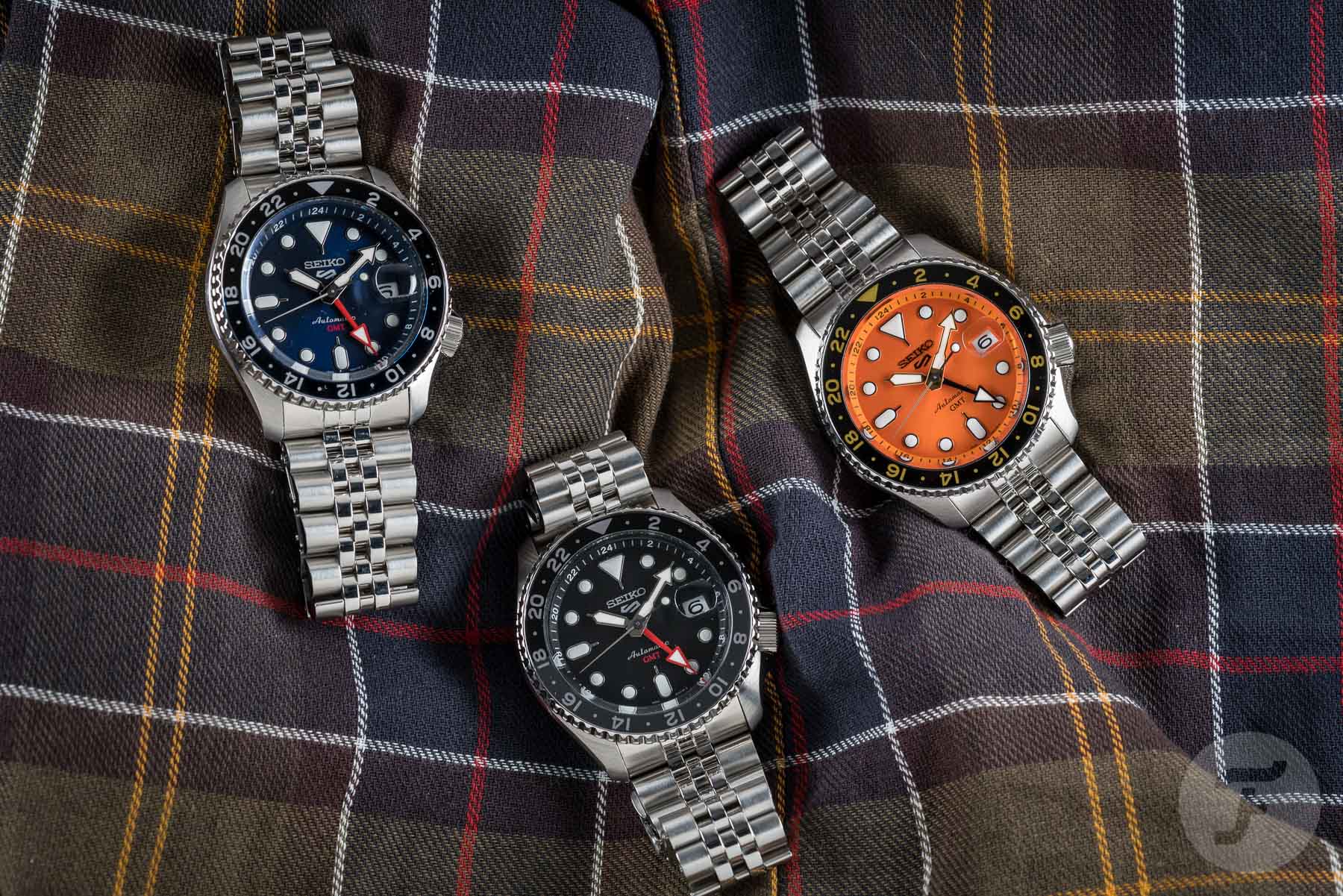 To me, these watches are a little bit like the return of John Frusciante to the Red Hot Chili Peppers. It’s something I always hoped would happen but never expected I’d live to see. But much like Frusciante’s return, the Seiko 5 GMT Series is just as good as expected, perhaps even better. But before I tell you about what you can expect from these watches, let me start with what I don’t like. Now, I don’t mean to be the water-resistance police. Don’t get me wrong, 100m of water resistance is not half bad. Still, I would truly love to see this movement in a 200m dive watch from Seiko. Will it happen at some point? Probably! But, unfortunately, with the SKX no longer around, this Seiko 5 GMT series is as close as we’ll get to an SKX GMT.

On to the good stuff! The first point to come to is that these new GMT models maintain the SKX-shaped Seiko 5’s dimensions, other than a 0.1mm increase in thickness. This is pretty impressive and a good thing indeed, as we wouldn’t need this watch to be bigger or taller than the OG model. The second thing is that as much as I would have loved a dive bezel with a 24-hour scale on the rehaut, these models feature both a 24-hour bezel and rehaut. Now, in the case of the Seiko 5, this makes sense because you won’t be taking it diving any time soon. Instead, you’ll be able to effectively track three time zones, which is definitely a better payoff. The final thing to note is that instead of a day/date display, these models show only the date and are equipped with a cyclops magnifier on the crystal. 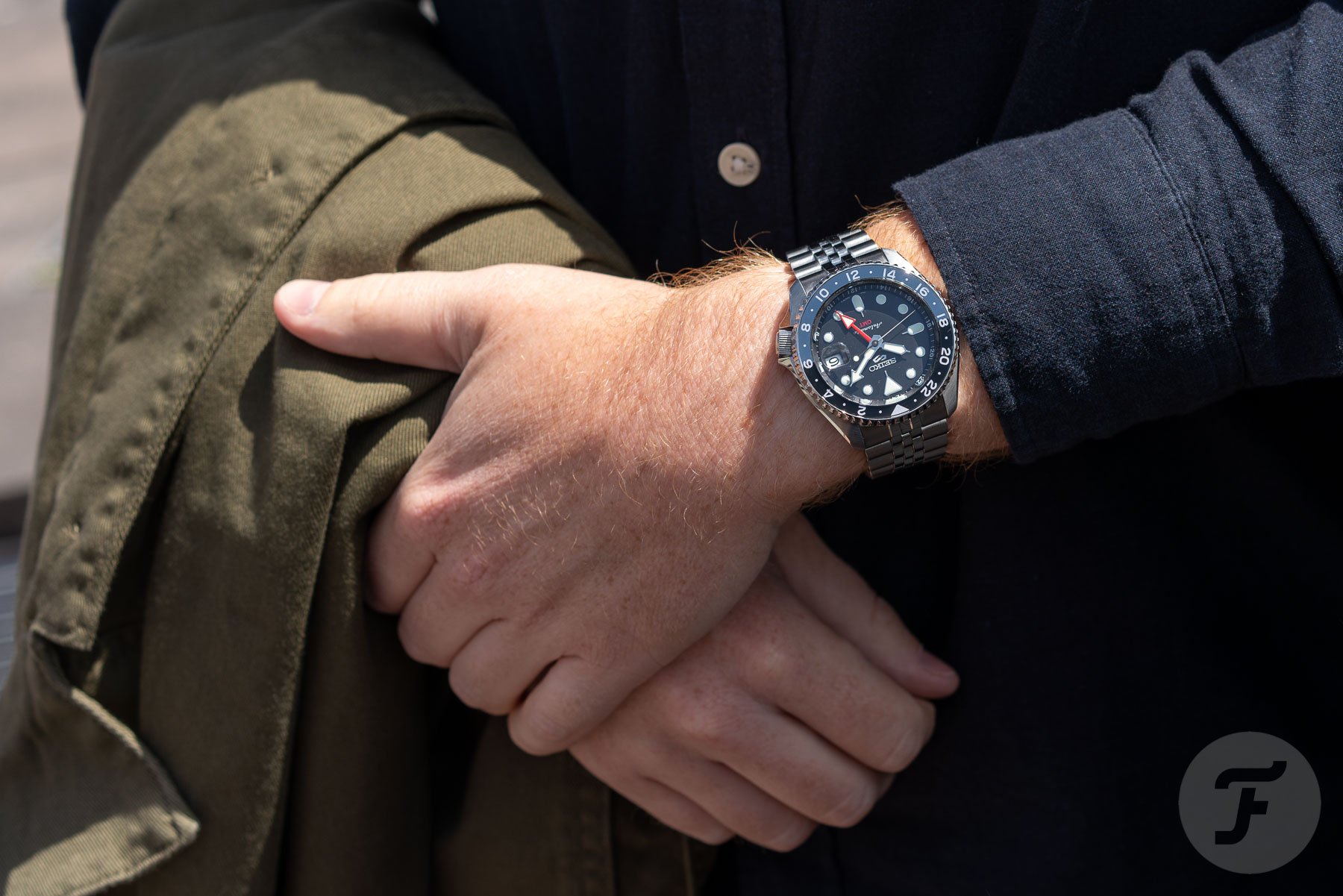 So, as you’ve already noticed in the pictures, there are three versions of this new model. There’s one in black, one in blue, and one in orange. Both the black and blue versions feature a red GMT hand, whereas the orange-dialed version has a black GMT hand. All of the hands on these watches are filled with plenty of Seiko’s finest Lumibrite, including the GMT hand. The bezel inserts match the color scheme of each watch and are made of Seiko Hardlex crystal. In person, the lighter-colored areas of the bezel inserts are almost mirror-like in appearance. While they’re perhaps a tad shiny for my taste, that’s still a nice touch. It gives these watches a bit of distinction from their aluminum-bezeled brethren. The crown does not screw down, so, as I mentioned, the water-resistance rating is 100m.

Inside the watch and visible through the exhibition case back is Seiko’s 4R34 movement. Very much in line with the Seiko 5 line’s mission statement, these 24-jewel workhorse movements provide 41 hours of power reserve and run at 21,600vph, giving you a great service interval. Now, if you’re wondering, this not a so-called “true GMT”, as it does not have an independent 12-hour hand. Rather, you can adjust the 24-hour hand by pulling the crown out to the first click and turning it clockwise. Nothing too fancy here, just reliable Seiko goodness.

All three watches (much like the SKX) come on the latest version of the ubiquitous Seiko Jubilee-style bracelet. This has been noticeably improved from the one found on the old SKX models. We did a side-by-side comparison, and the new steel bracelet feels much more solid and qualitative both on and off the wrist. 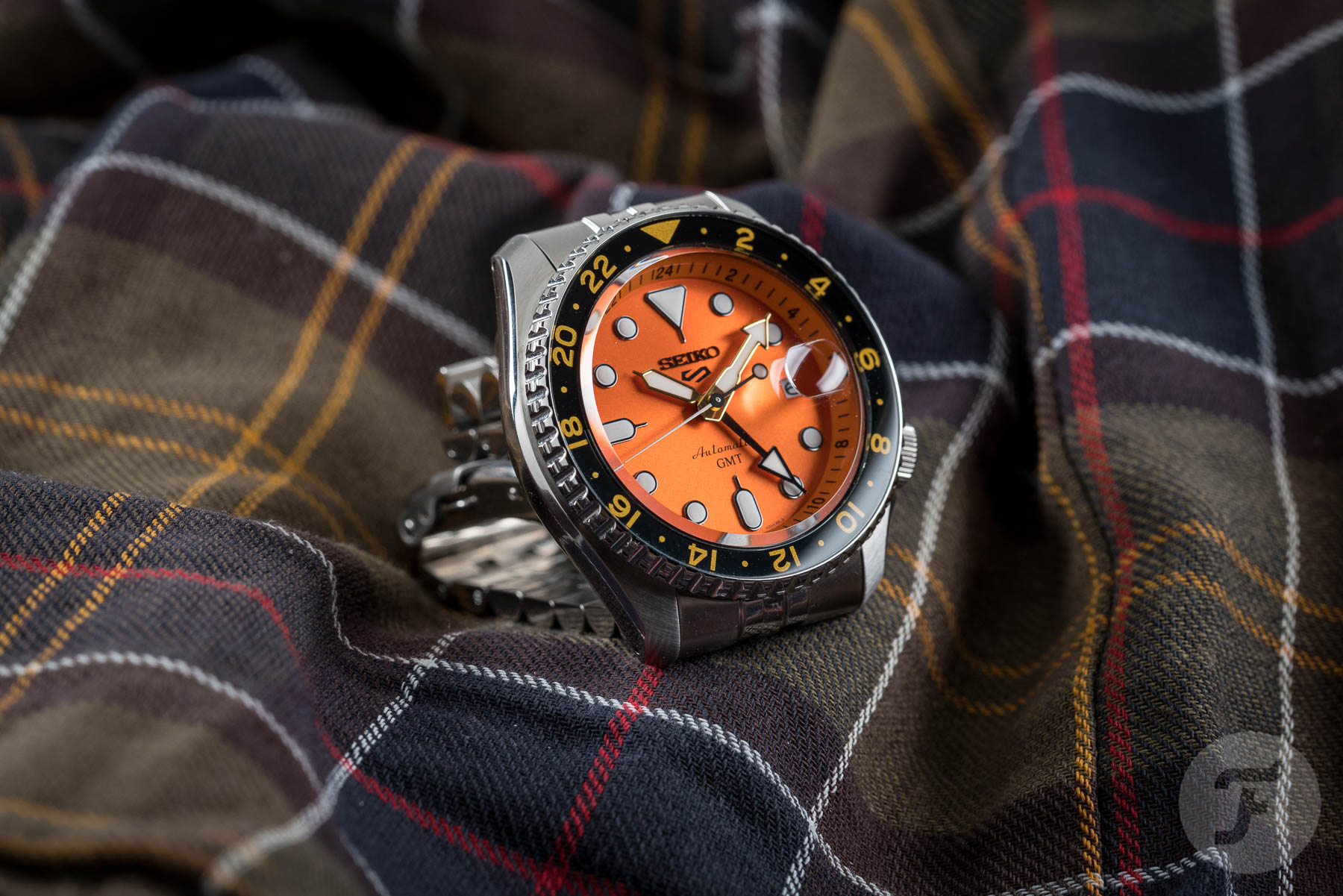 As you’ve seen, these new Seiko 5 GMT models have all the ingredients necessary to become a crowd favorite. Perhaps not a classic like the SKX, but I’m open to being proven wrong — only time will tell. In the meantime, I’m sure you’re wondering about when and where you can get your hands on one of these watches and how much it will cost. Well, in short, these Seiko 5 GMT Series models will be available at selected Seiko Boutiques and other retail stores all over the world in July 2022. The price will be €470 (approx. European price). 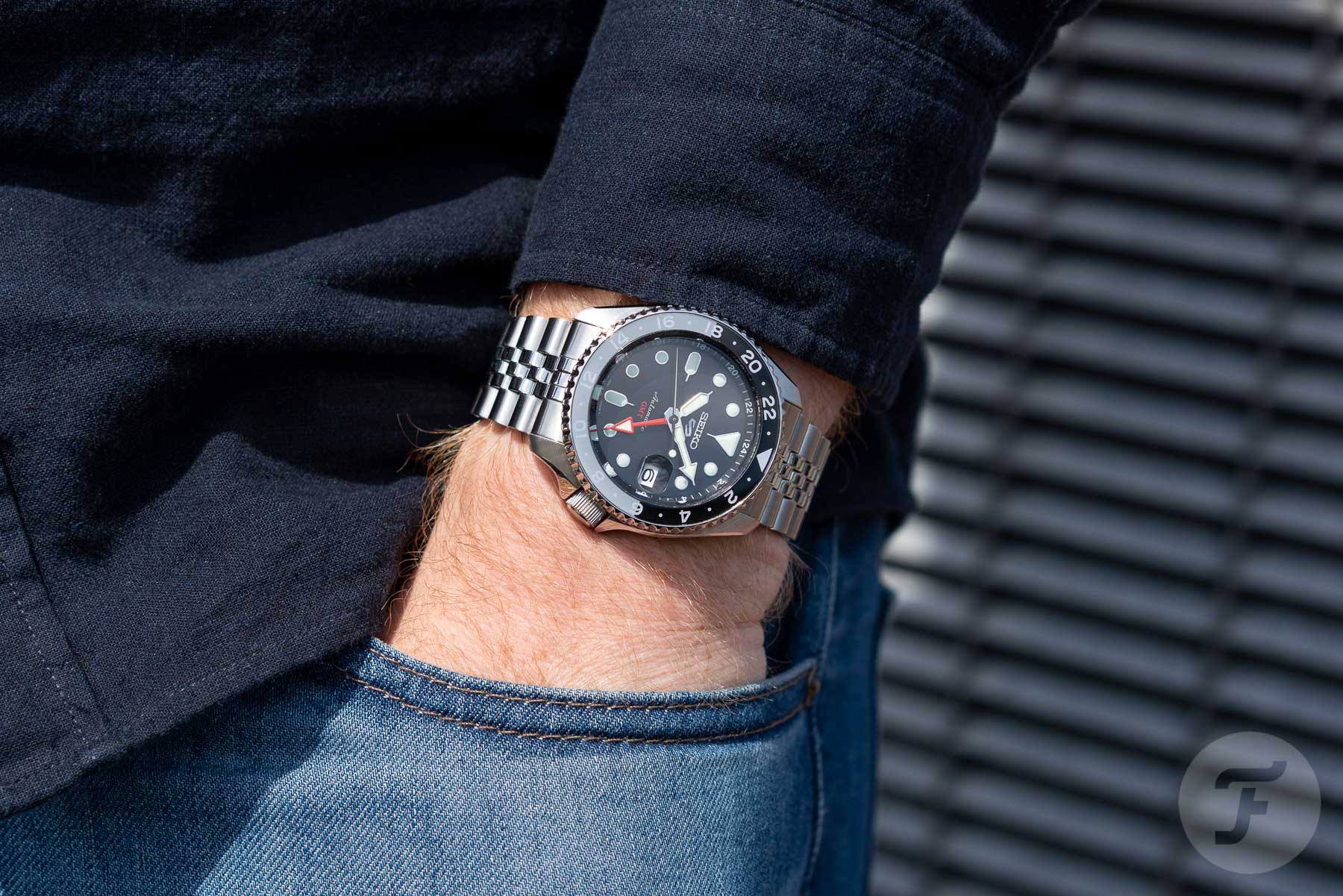 What do you make of these new Seiko GMTs? Will you be adding one (or all three) to your collection when they launch, or will you steer clear altogether? I think you know how I feel about these. But all in all, it’s hard not to be excited about Seiko offering such an affordable GMT in the iconic SKX case. Make sure to let me know your thoughts in the comments below.

Hot Topics
Introducing: The New Seamaster Professional 300M 60 Years Of Bond — With A Special Animated Case Back
105 comments
Are You Still After An Omega × Swatch MoonSwatch?
97 comments
It’s Time To Invest In A Dress Watch — Our Picks From Breguet, Omega, Grand Seiko, And More
73 comments
Introducing: The Oris Divers Sixty-Five Fratello Limited Edition
62 comments
The Rolex Waitlist Conundrum — How Much Will The Price Of Your Watch Increase While You Wait?
50 comments
Popular
Grand Seiko SBGA211 ‘Snowflake’ And Why I Didn’t Buy It
Robert-Jan Broer
22
#TBT Seiko H558 Arnie – One Serious Diver
Michael Stockton
25
Hands-On With The Patek Philippe Nautilus 5740/1G
Robert-Jan Broer
2