We had the pleasure to go hands-on with the Seiko Presage Urushi Byakudan-nuri, or reference SPB085. I say pleasure, but this watch has a dial that is quite difficult to capture if you’re without the proper equipment. And it is exactly that dial that makes this Seiko Presage SPB085 so special.

Although Seiko is rushing out limited editions like there is no tomorrow (just like many other brands), I have to say that many of them simply look stunning as well. The demand from the market is for limited editions, so brands like Seiko just simply fulfil them by releasing one every once in a while. Yesterday during an event we organized with Blancpain, one of the guests made a remark that limited editions weren’t really ‘a thing’ 10-15 years ago. Well, they actually were of course, as we see also many limited editions of certain watches from the 1990s and 2000s, I just think that the market wasn’t as transparent as it is today. Because of the internet, it is immediately ‘out there’ when a brand is releasing a limited or special edition for a specific country or market for example. In the past, only people in that market (or country) would know about it. That said, I try to look at the watch itself if I just like it or not, not specifically as a limited or special edition. For me, that’s never a real reason to purchase a watch, either I like it or I don’t. 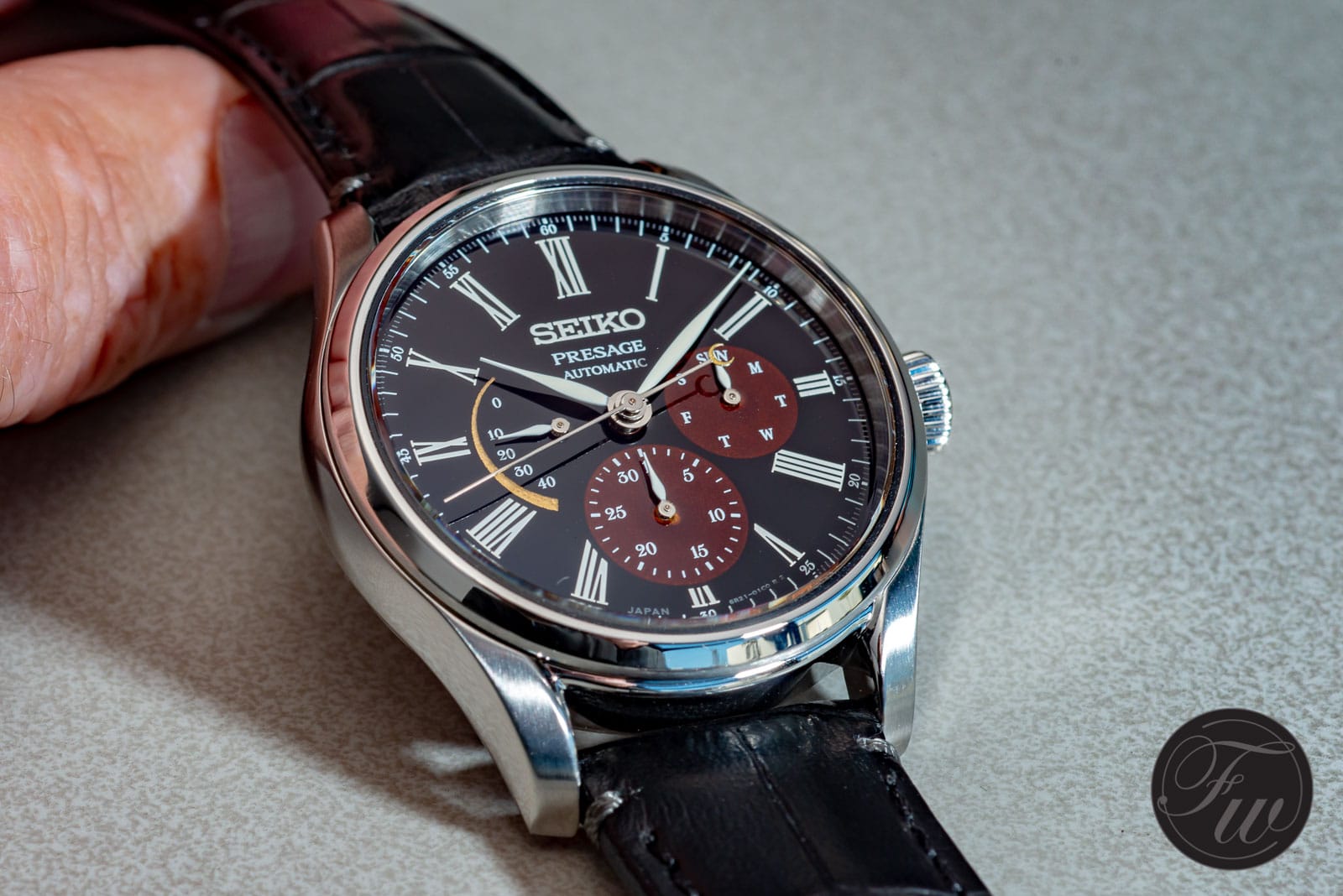 I don’t think the Presage needs an introduction, but if you want to read more about this Seiko collection, you can read our previous articles on these watches in our Seiko section. Seiko takes details very seriously, and the Presage collection is especially – in my opinion – about dials. In the past we showed you this beautiful Sakura Fubuki edition and the SPB069 with beautiful blue enamel dial, both limited editions as well, of course.

This new Presage SPB085 goes by the name, as you’ve read in the title and introduction of this article, Urushi Byakudan-nuri. Now, this does need some explanation. These names, Urushi and Byakudan-nuri, are the names of lacquer techniques. There are different lacquer techniques that vary in complexity or difficulty, the Urushi and Byakudan-nuri techniques are considered to be the most elaborate ones. Seiko’s Presage reference SPB085 uses a combination of these lacquer techniques to create colours that should remind you of the sky and moon just before dawn. I kid you not. It doesn’t stop to amaze me how Seiko (and Grand Seiko) comes up with these type of descriptions, which are often very spot on (remember Snowflake or Mt Iwate?). I might sound a bit cynical, and of course I write this with a smile, but that doesn’t take away anything from the sincere admiration I have for these lacquered dials. What Seiko tells us, is that these lacquer techniques were used almost exclusively for important places (such as temples and shrines) or objects such as the armor of Shogun warlords. And now, for Seiko’s Presage SPB085. 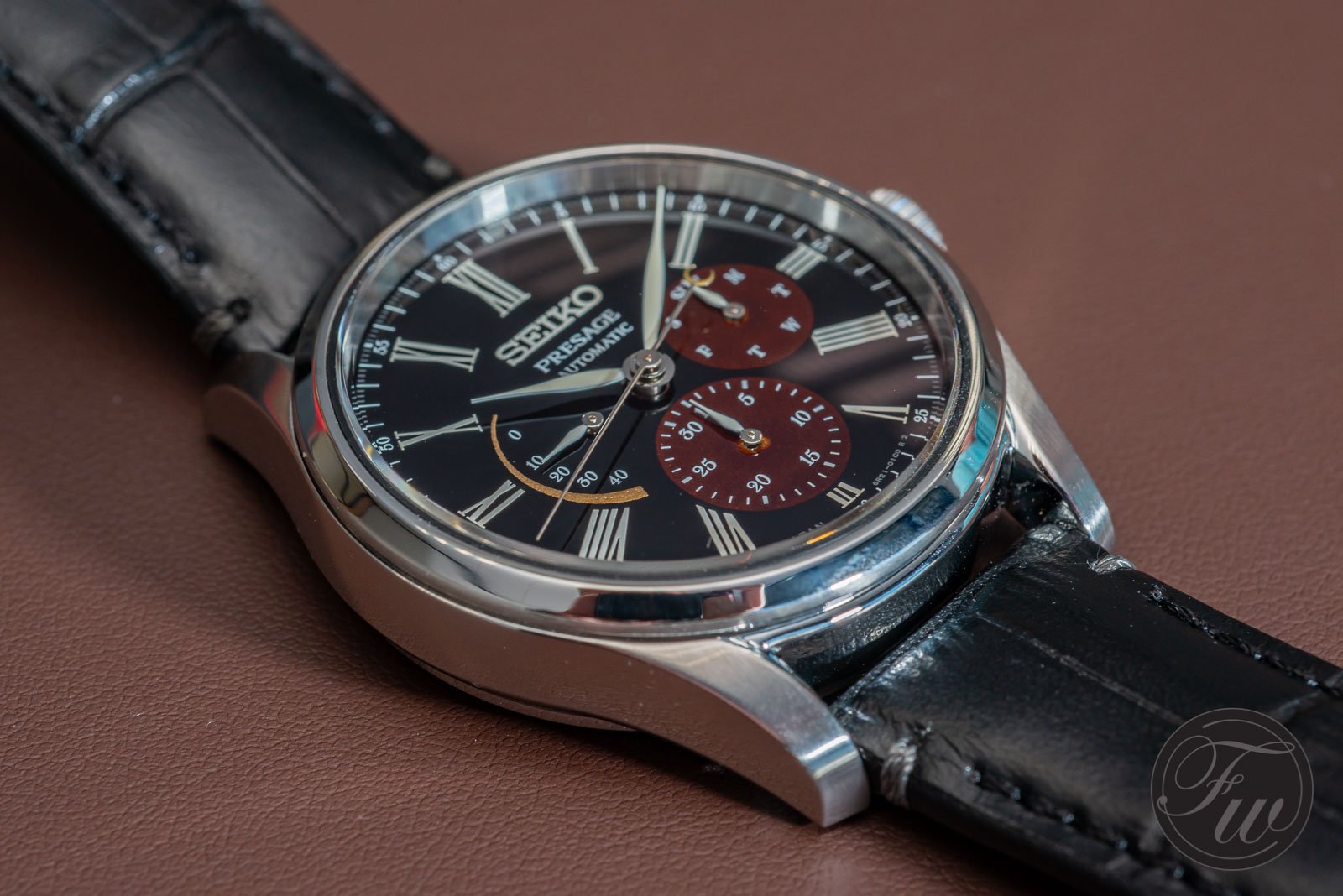 Not only the techniques as mentioned above are used for the SPB085’s dial, but there’s also the Maki-e technique. First, the dial is made jet black with a hand-painted black lacquer. It is directly painted on the metal base of the dial, then dried, following by polishing. This is the Urushi technique. It is being repeated by the artisan until the perfect level of black has been achieved. The subdials, as you can see, are then sprinkled with a metallic powder. It now needs to be repainted with a red-tinged semi-transparent Urushi lacquer again. These steps are repeated until the required effect (of a nice deep red tone) is accomplished. For the moon shaped power reserve indicator, the Maki-e technique is being used. As with the Byakudan-nuri technique, the crescent is first coated with a layer of Urushi lacquer that acts as the adhesive to the fine, gilt-colored powder that is then applied to it. Once the powder is on the dial, the craftsman gently taps it to disperse the powder evenly across the surface and then uses his own specially chosen material to perfect the surface. Each dial is the result of painstaking efforts over a number of weeks because this Byakudan-nuri technique requires much longer than is needed for a simple Urushi dial.

These dials are completely done by hand in the studio of Urushi master Isshu Tamura, in the Hokuriku region of Honshu (Japan’s main island). All Urushi dials that are used for the Seiko Presage collection have been made under his supervision. 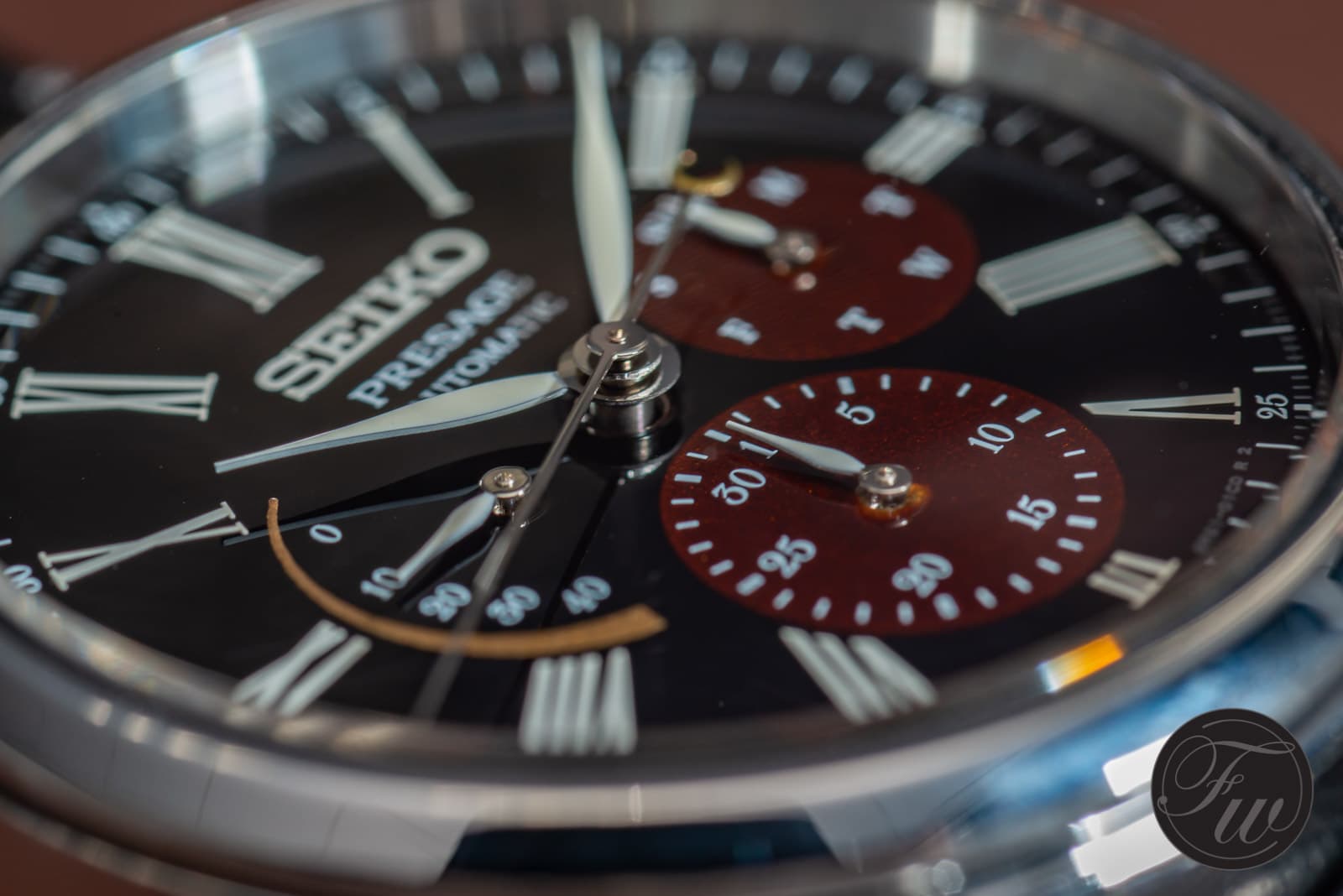 Aside from the dial and the craftsmanship that goes into it, let’s also take a look at the Seiko Presage SPB085 in total. The dial is of course one of the main attractions here, and probably very decisive on both the wannahave-factor as well as the price tag of the watch. Seiko Presage watches start at 410 Euro, go up to four digits but below the positioning of Grand Seiko. Where the entry-level Presage models have a caliber 4R movement, the more expensive models have a 6R caliber or even the chronograph 8R movement. Interesting to note here is that the 6R caliber Presage SPB085 I am talking about here, has a new feature compared to the existing 6R caliber Presage models. You might have seen it already on the images, but this Seiko Presage SPB085 with beautiful lacquered dial has a week indicator at 3 o’clock. The date indicator is at 6 o’clock and at 9 o’clock you will find the aforementioned crescent with the power reserve indicator. 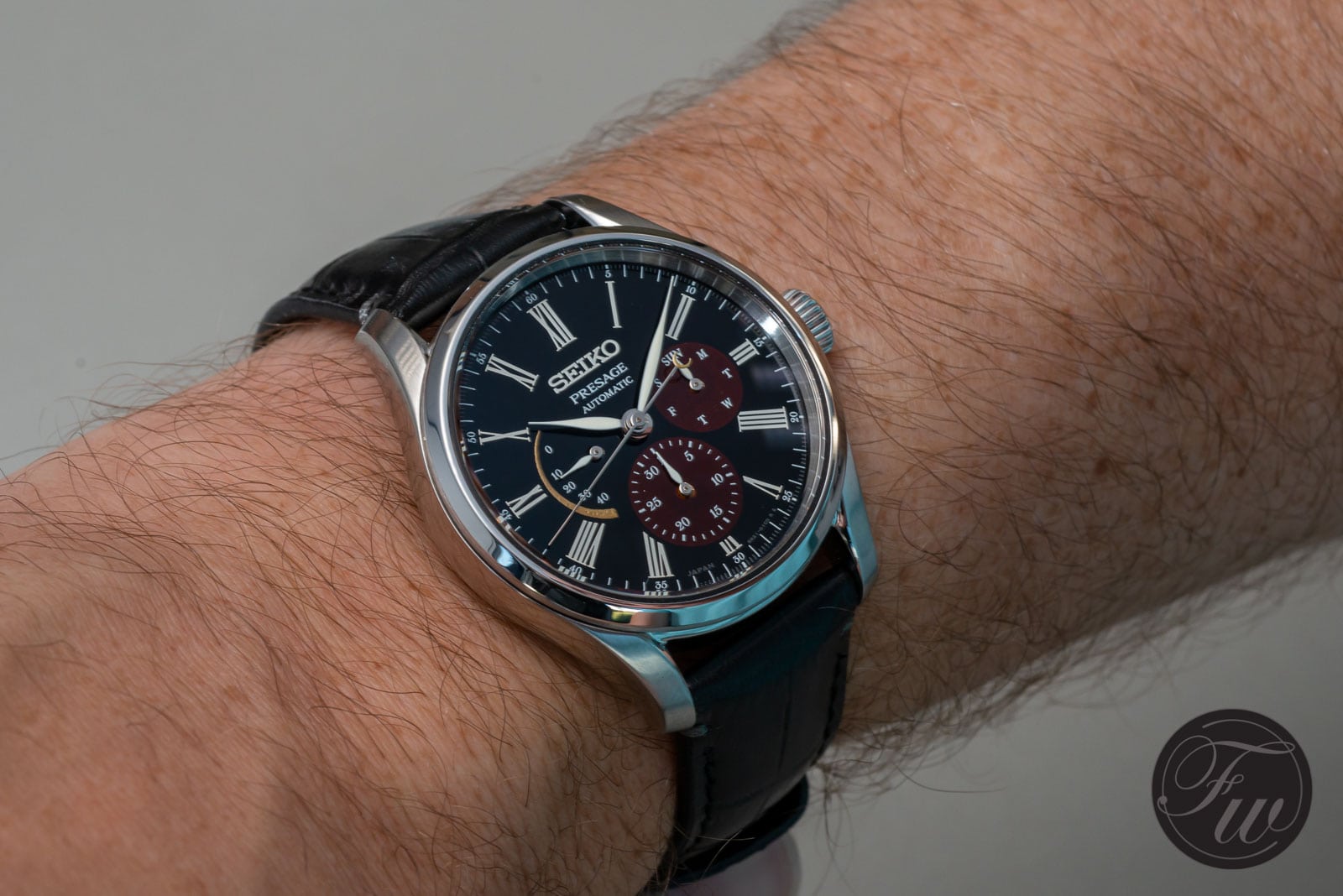 The 6R caliber movements are a step above the 4R movements and the 8R movements are basically the more complex chronograph movements in this range. For this Presage SPB085, Seiko introduced the weekday indicator at 3 o’clock. The other features were already existing in the 6R27 movement from the same series.

This movement has a power reserve of 45 hours (the indicator on the dial shows 0-10-20-30-40 and the crescent continues a bit after ’40’) and the ticking number is 28800vph. Via the transparent caseback, you will be able to enjoy the view on the caliber 6R21 movement. 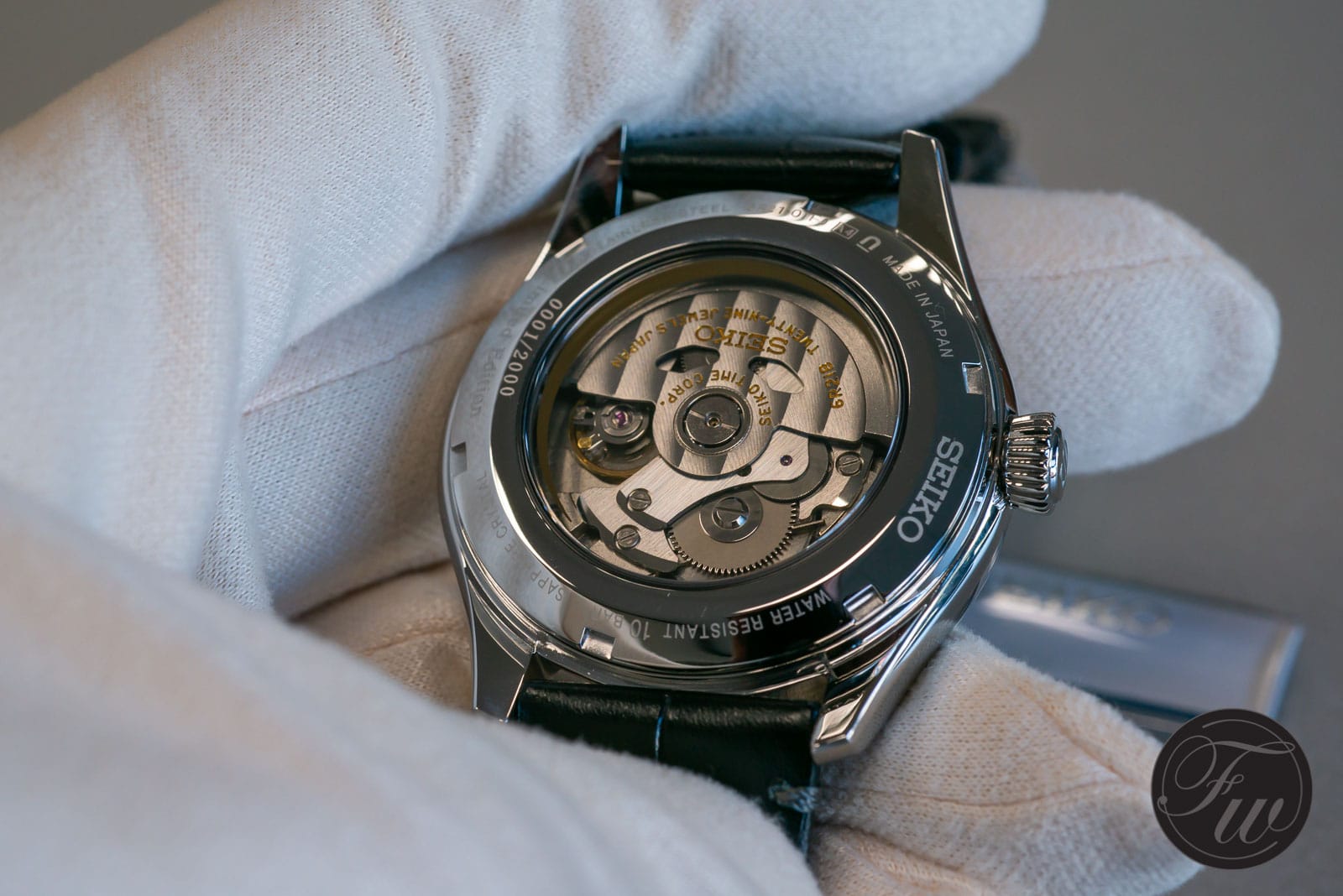 As you can see, the finishing of the movement is very pleasing to the eyes. Tokyo striping on the rotor for example and a mix of brushed and polished finishing on the plates. The rotor has been engraved and gold-filled with all necessary information. The crown is signed and large enough to grasp and wind & set the watch.

The bezel of the case back contains a lot of information you don’t necessarily need to know. However, if you are buying a limited edition, it is at least nice to know the unique number of the watch. In this case, it indicates 0001/2000, but don’t worry (if you are after the no.1), this one is a sample model that travels around the world. 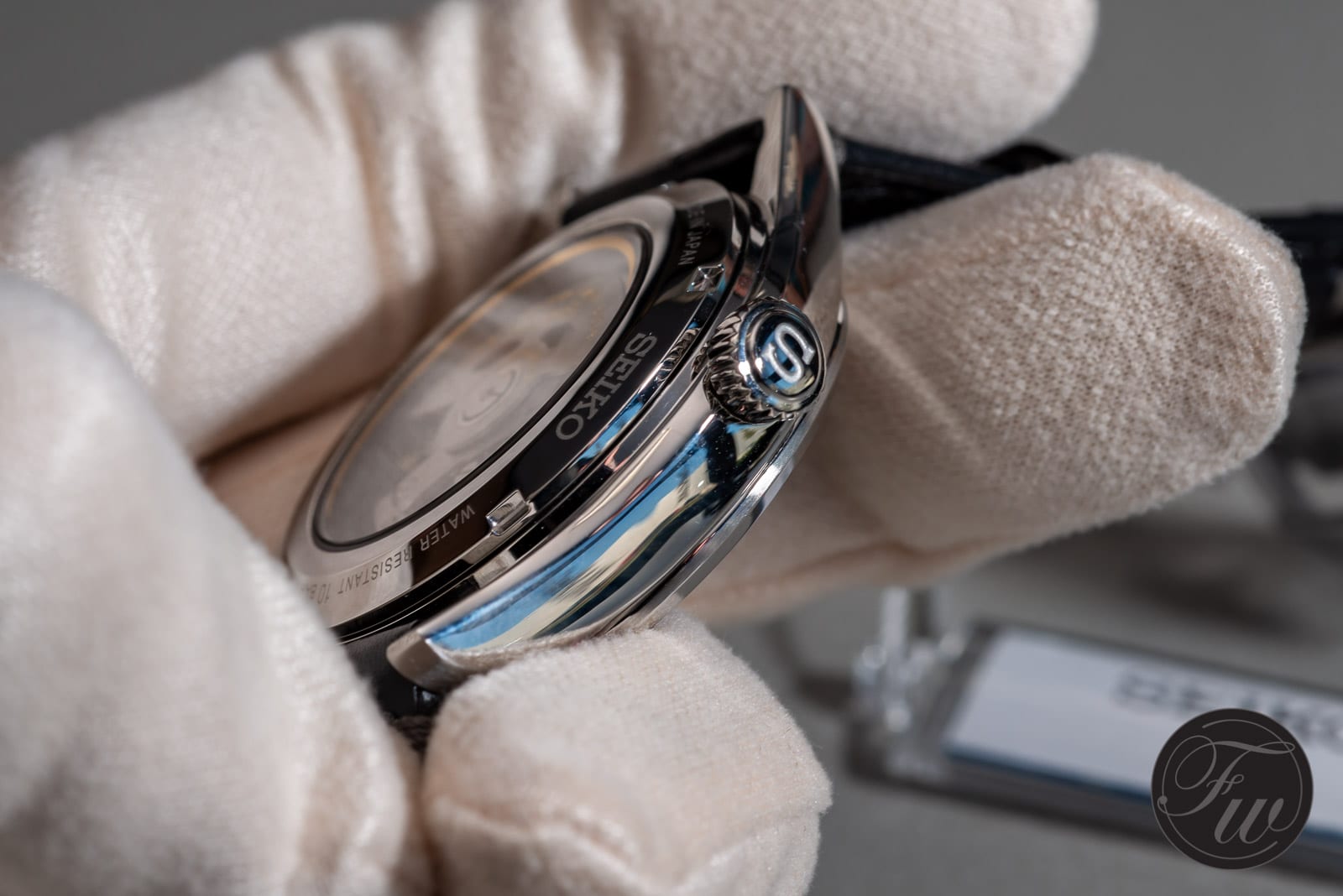 With a diameter of 40.5mm, the Seiko Presage Urushi Byakudan-nuri limited edition probably fits most wrists. While some of the Presage models, such as the SSA363J1 with caliber 4R movements have a rather thick case, this SPB085 model has a 12.8mm thickness. Not exactly your ultra-thin watch, but with a 40.5mm diameter and a calendar complication I think it is fine. 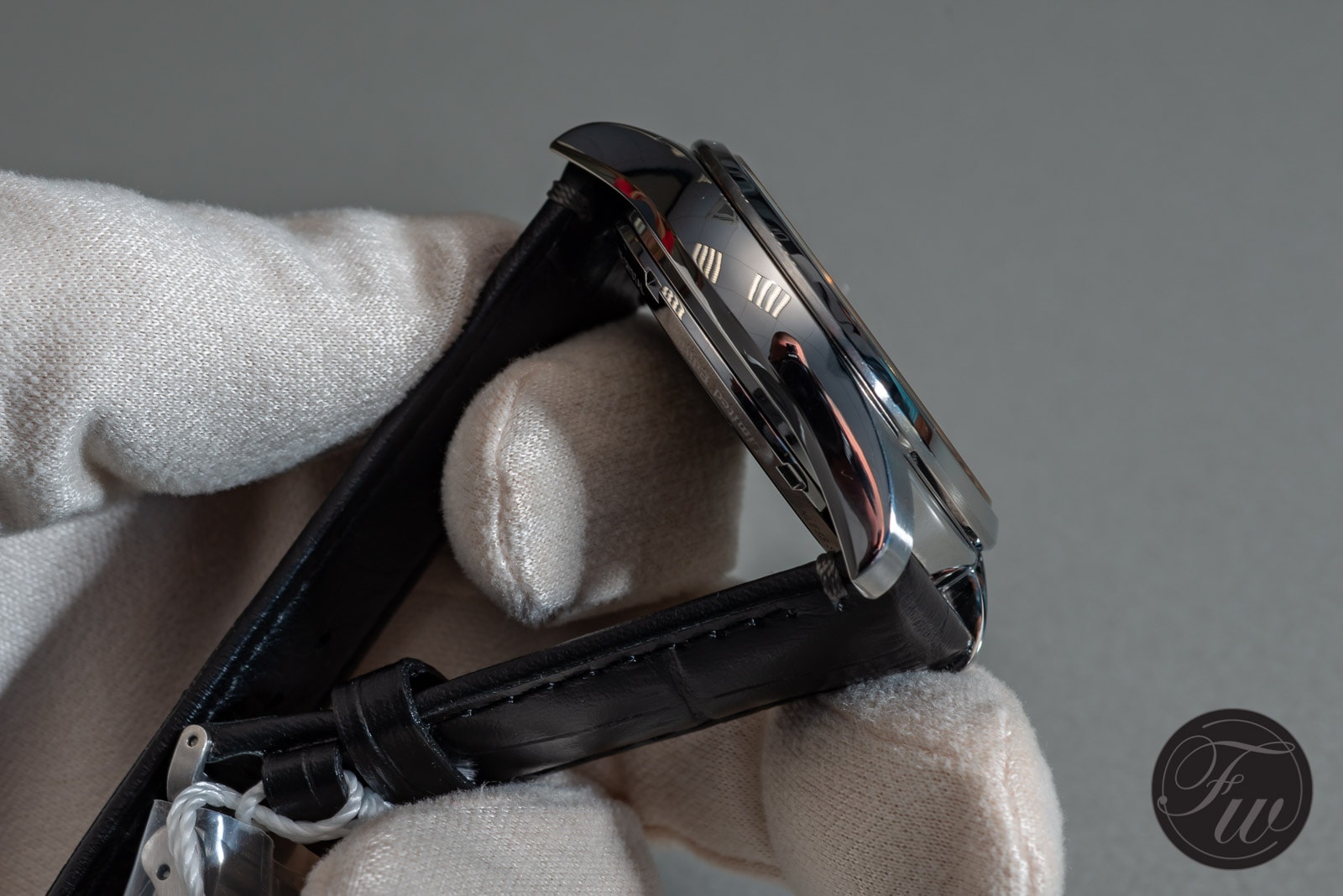 The Seiko Presage SPB085 comes on a croc strap with a folding buckle. A good looking combination, especially with the lacquered dial a bit of ‘chic’ is in place here. On the dial there’s a lot going on, with the power reserve indicator, the weekday and date subdials as well as the use of different colors. However, the readability of the watch is perfect. The large Roman numerals might not be to everyone’s liking (I could have done with more modest stick markers or at least smaller numerals), but it does give the watch a classic touch.

Limited to 2000 pieces worldwide and the watch has a retail price of 2500 Euro (including VAT). It will be available in December 2018 at selected Seiko boutiques and dealers. The price of 2500 Euro might seem a little steep compared to some of the other Presage models, but keep in mind that this hand-made dial is truly unique and involved many hours of craftsmanship.