The Seiko Prospex reference SPB105J1 Dark Green Sunset is more than a special edition of the Seiko MM200 diver. 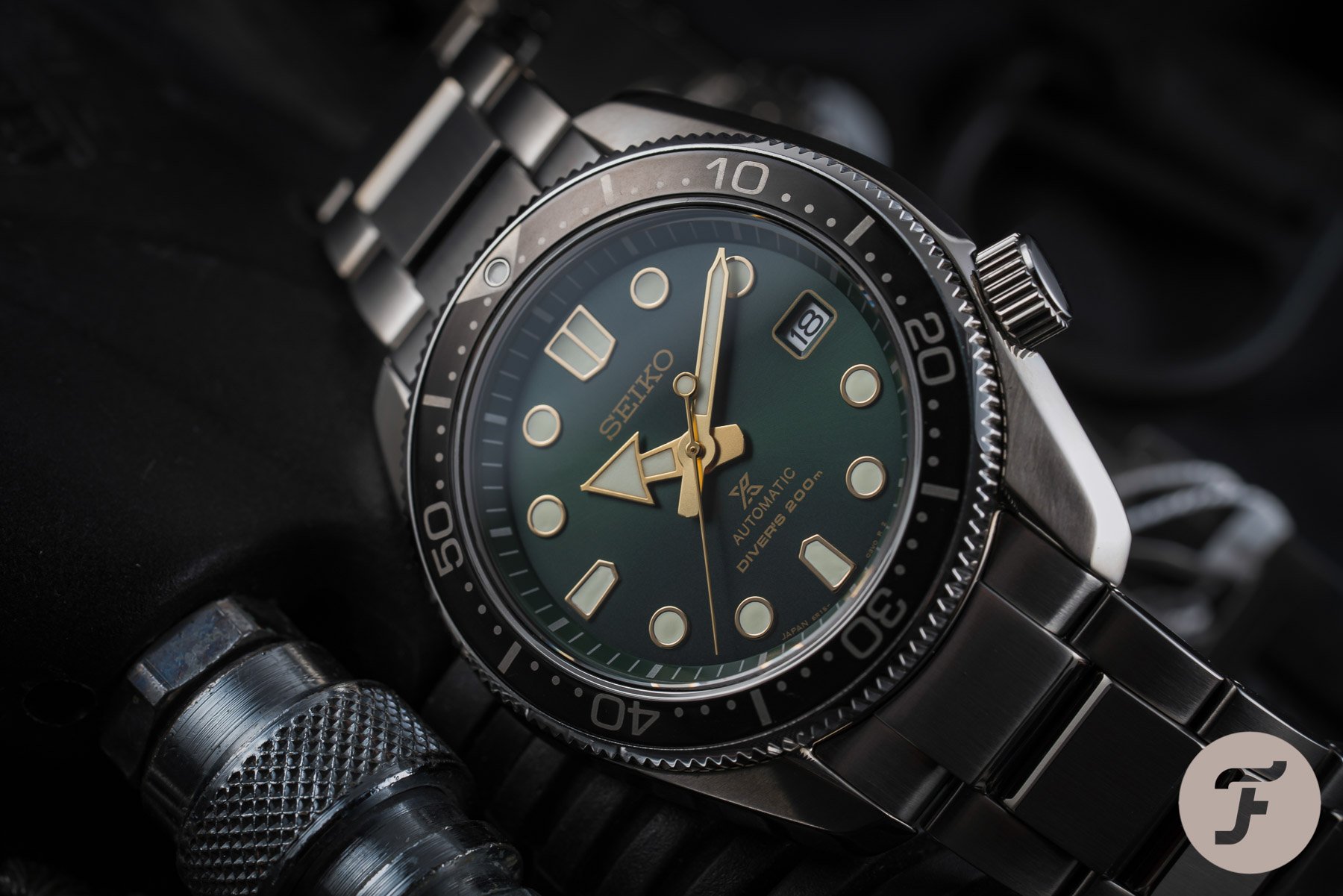 I got my first personal Seiko experience with the well-known Seiko ‘Sumo’ SBDC001 quite some years ago and I wore that watch a lot for a long time. I loved wearing it and I still love wearing it as it was my first watch that showed the power of a mechanical divers watch. But from the get-go, I never was the biggest fan of the font type used for the numerals on the bezel inlay. It’s a widely discussed feature amongst Seiko enthusiasts and there are a lot of people that say the ‘cartoonish’ style numerals give the watch its own character and make it stand out from the huge number of standard divers watches that all take their looks from the iconic Rolex Submariner. Although I agree with the principle of creating something unique and different, the style of the numerals still has to appeal to you to make it a watch that not only stands out from the crowd but making it a watch you really love. 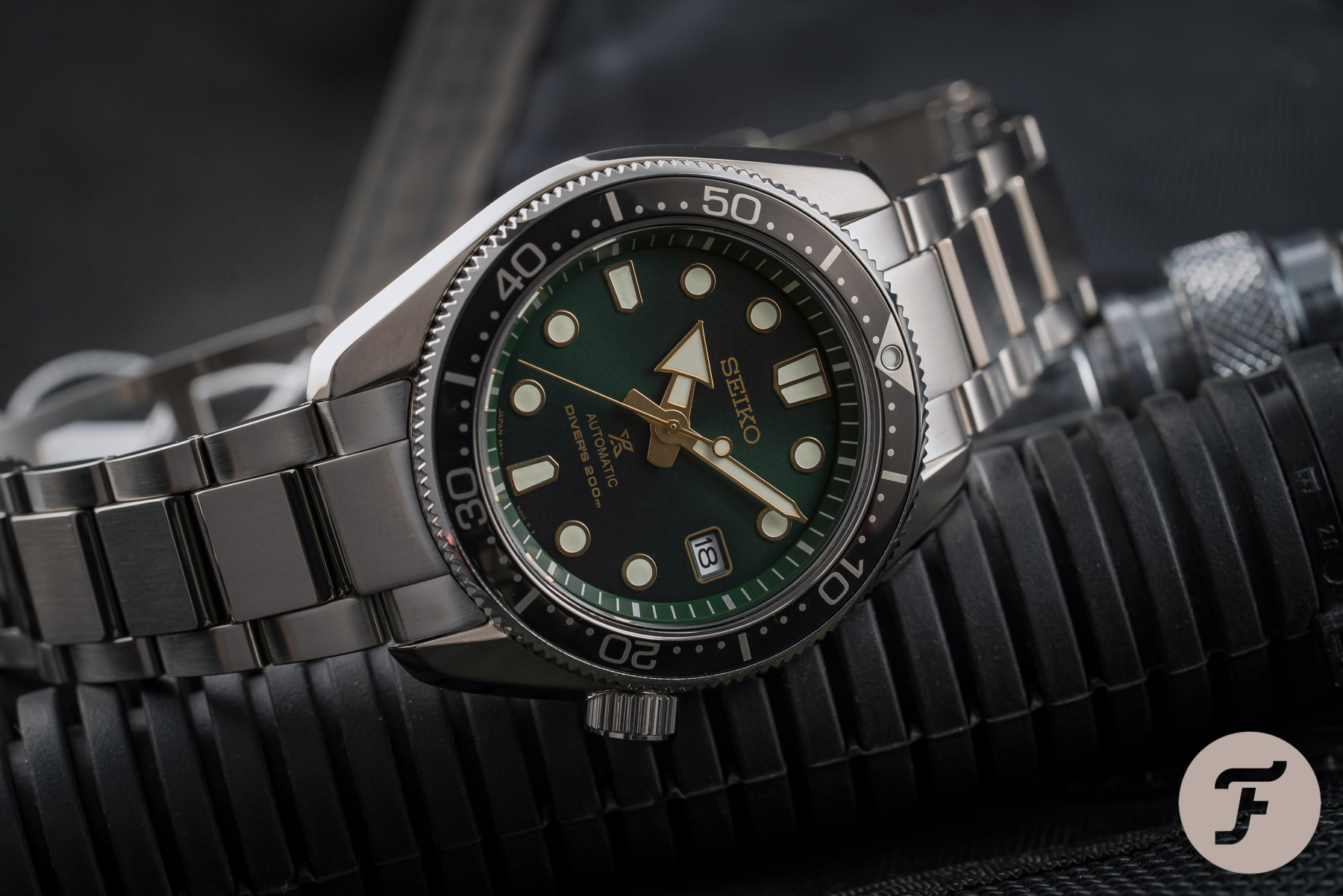 It was the Sumo that cemented my love for the Seiko brand in general and the Prospex line of watches in particular.

Don’t get me wrong, I really like the SBDC001 a lot but aesthetically the typeface of the numerals have always been in the way of falling in love with it. And to be honest, it’s a personal issue I have with some of the older Seiko designs from 5-10 years ago. There are a few that just didn’t appeal to me because there would be a design element that I would find to be off or weird. But that didn’t keep me from developing a great respect for the brand and adding Seiko watches that I did like to my collection. And although I am not the biggest fan of the numerals, it was the Sumo – as my first Seiko diver – that proved itself to be a very reliable and practical daily wearer that cemented my love for the Japanese brand in general and the Prospex line of watches in particular.

Over the last couple of years, Seiko has really been tackling some of the design issues and has really upped their design game within the Prospex line. I was very impressed by some of the watches Seiko released with some of them being totally new watches, some of them being updated versions of existing models and some being beautiful re-interpretations of Seiko classics. From the updated Marine Master 300 to the all-new LX line and the Prospex re-creation of the 1970 diver’s watch, they have all been great introductions in my opinion. As you probably would have guessed I was also very pleased with the fact that Seiko decided to update the Sumo and introduce the new version (ref. SPB101J1) earlier this year at Baselworld 2019 with an updated design of the bezel. (Read in detail about the updated Sumo in here). 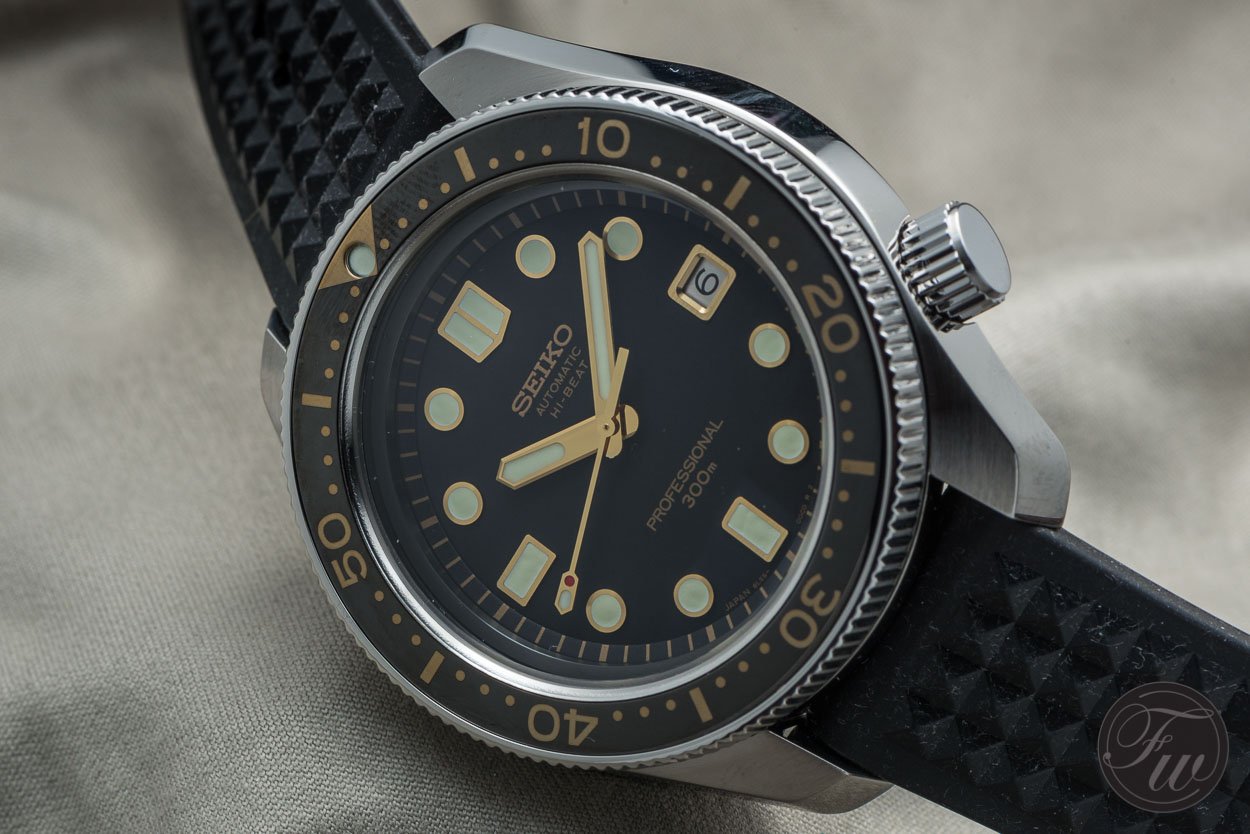 The one Seiko recent Seiko release that really stood out for me is the Seiko 1968 Automatic Diver’s Re-creation Limited Edition (SLA025J1) with its beautiful retro looks and hi-beat movement. I recently got the chance to have a closer look and try it on (thank you Ralph) and I have to say it only made me love it even more. Along with the SLA025 Seiko also released the Seiko 1968 Automatic Diver’s Modern Re-interpretation last year at Baselworld 2018. The watch – also nicknamed Marine Master 200 or MM200 – is inspired by the looks of the classic 1968 diver and adds a good dose of modern appeal. Up until now, Seiko released four regular edition models (the black dial/black bezel on bracelet SPB077J1, the black dial/blue bezel on black silicone strap SPB079J1, black dial/blue & red bezel on silicone strap PADI SPB087J1, and the blue dial/black bezel on bracelet and strap SPB083J1).

Over the last couple of years, Seiko has really upped their design game within the Prospex line. 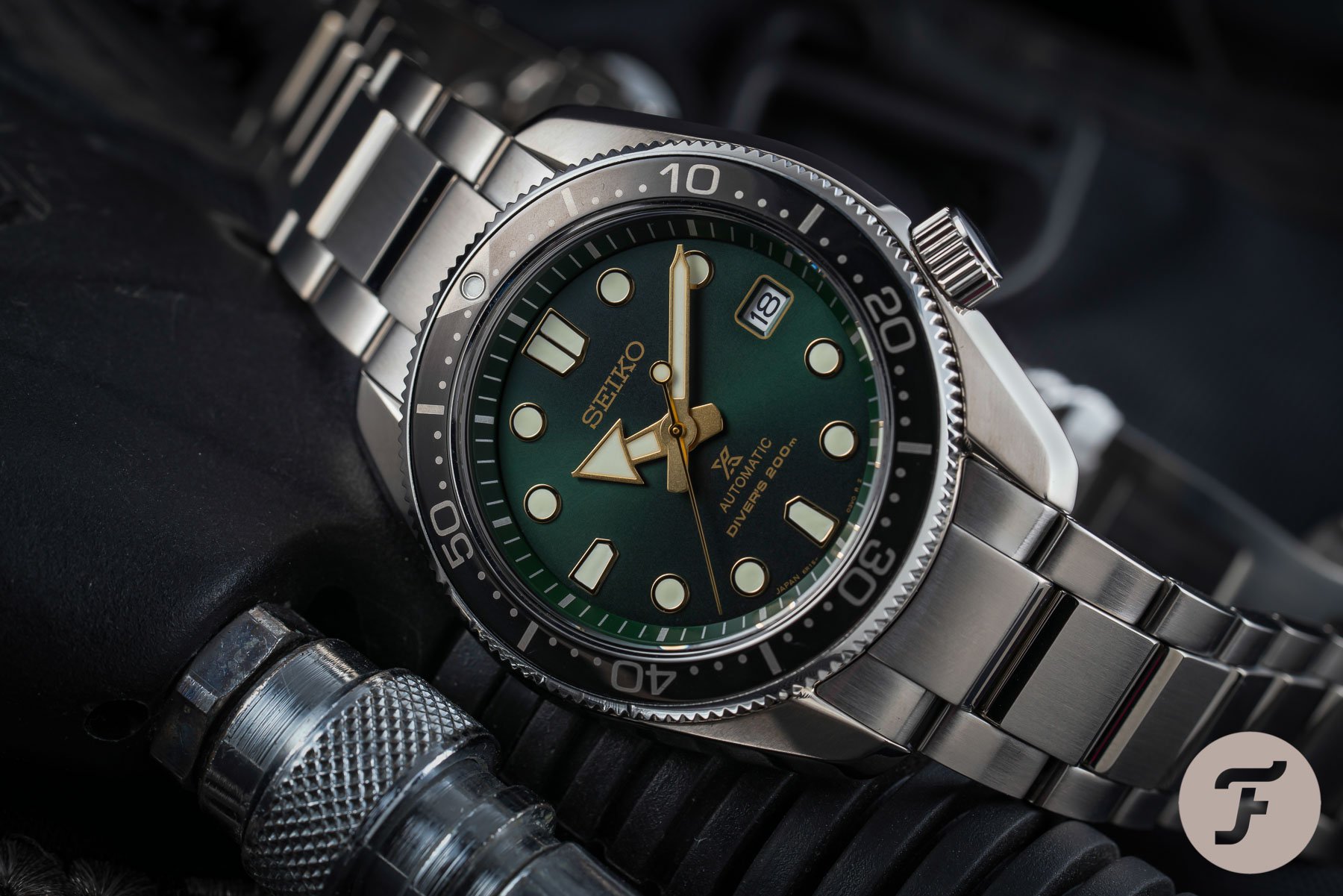 Next to that Seiko also introduced two special editions this year, starting with the ‘Twilight Blue’ (ref. SPB097J1) that we covered here. The blue and orange colour combination make this a stand out version of the MM200. It was the second special edition however that really hit home for me when I first saw images of it. The SPB105J1 also known as the ‘Dark Green Sunset’ impressed me because to me it is the best modern re-interpretation of the Seiko 1968 Automatic Diver. The dark green dial and black bezel combined with gold-tone hands and accents around the markers make this a classy watch and a true nod to the design of the original 1968 Automatic Diver. 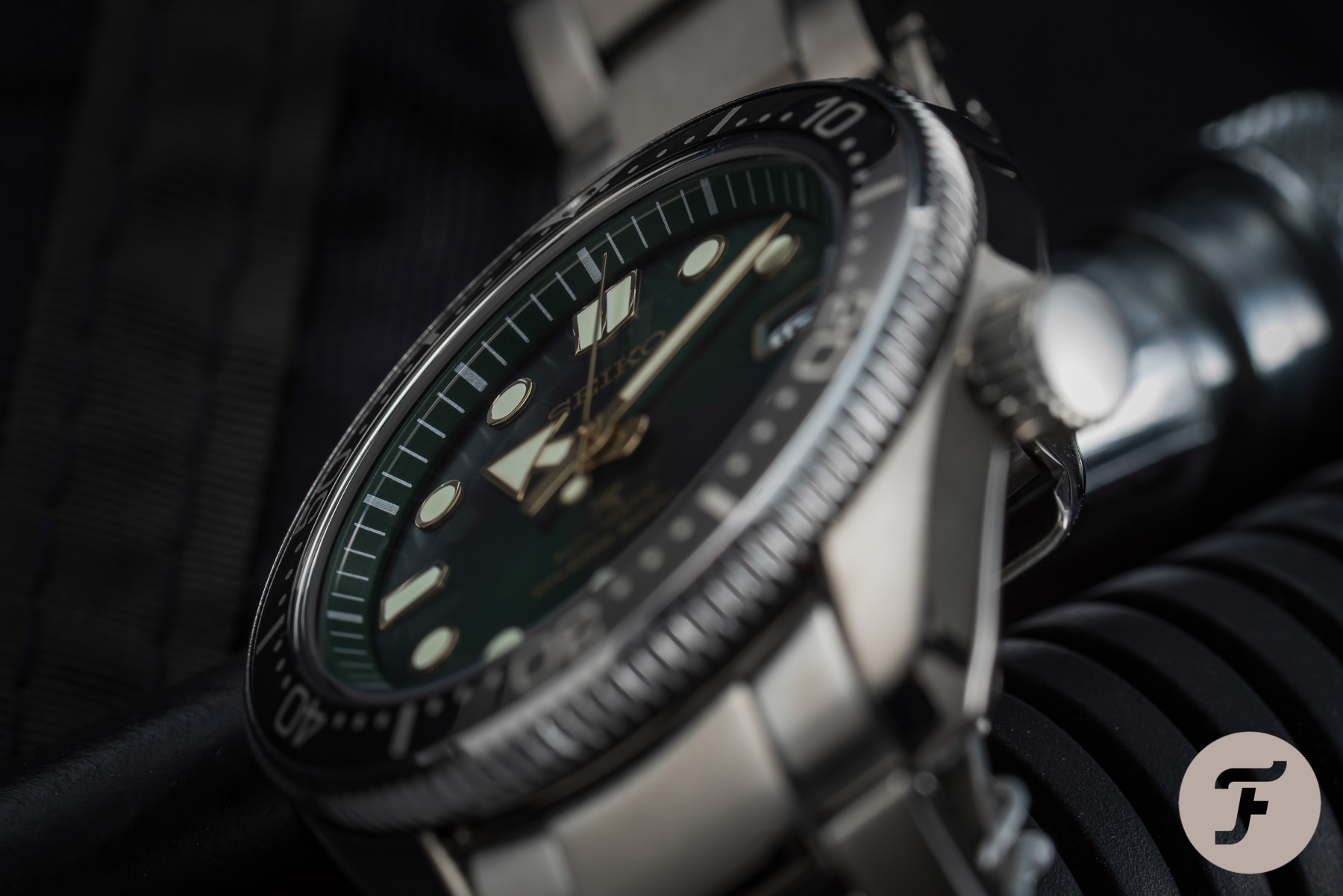 The ‘Dark Green Sunset’ is one of quite a few Seiko Prospex watches with a green dial that have been released recently. Both the previous and current generation Sumo were released with a green dial and the Marine Master 300 or ‘1968 Automatic Diver’s Limited Edition’ as it is officially referred to, was presented at Baselworld 2018. It’s obviously quite a substantial number of green dialed Seiko’s but I have to say I don’t mind it at all. It gives you a nice extra option besides the usual black and blue dial colours that most Prospex watches come in. So is this just another green edition to the Propex family? Absolutely not. The combination of colours combined with the gold accents gives the SPB105J1 a completely different appearance than the previously mentioned watches. It’s less sporty and more retro and classy and that gives it the extra appeal for me.

The dark green dial and black bezel combined with gold-tone hands and accents around the markers make this a classy watch and a true nod to the design of the original 1968 Automatic Diver. 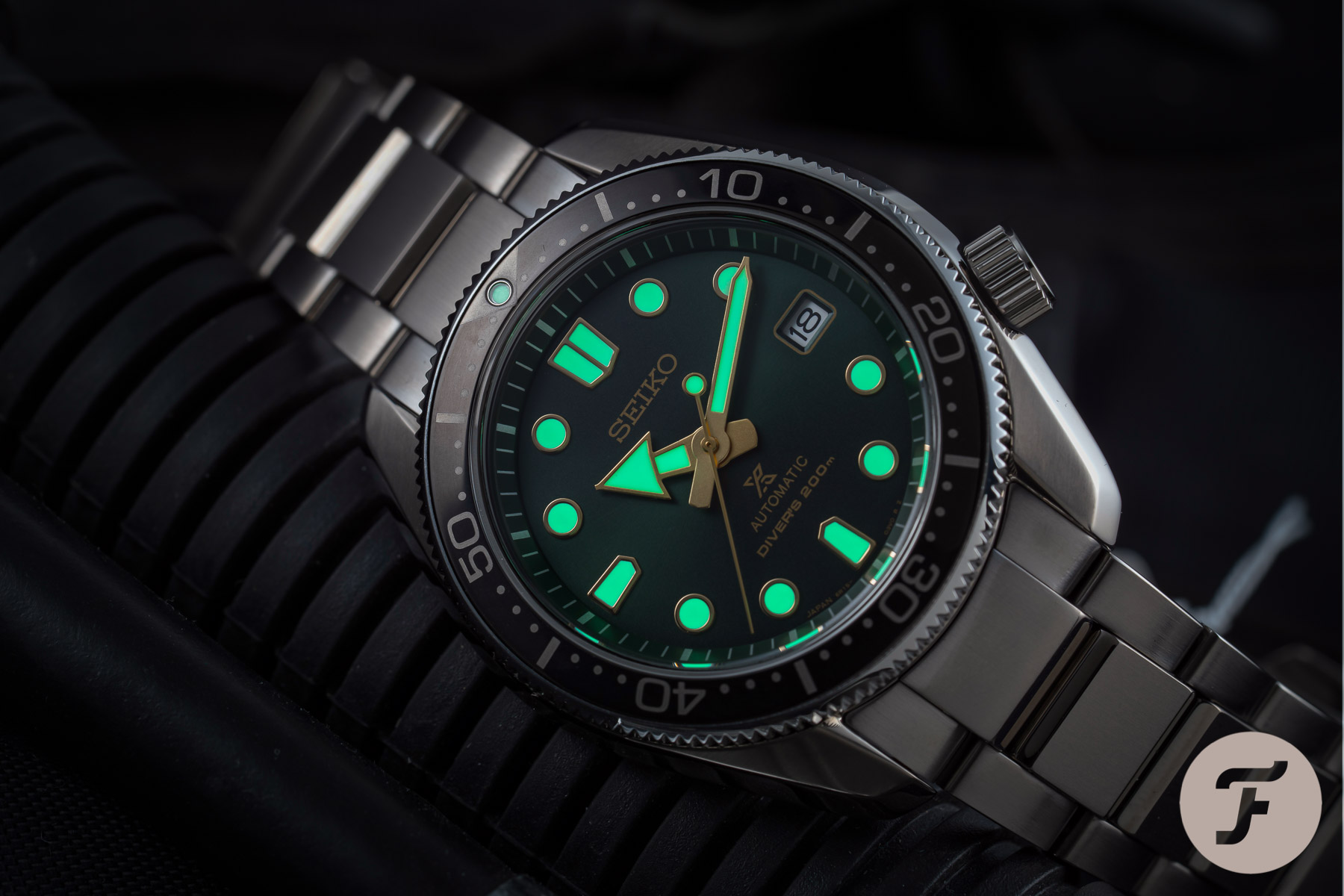 When I first took the ‘Dark Green Sunset’ out of the box I was a bit disappointed with the green colour. But I quickly found that the bad artificial lighting was not doing the dial justice at all. As soon as you see the dial in proper lighting, the beauty of the green colour will reveal itself to you. Once putting it on your wrist you will find out that the different angels of looking at the watch will reveal a different perspective on the watch almost every time. The SPB105J1 is an easy watch to wear despite its considerable 44mm diameter. What definitely helps is its relatively slim 13.1mm case profile that makes the watch wearable and light. The easy wearability and the colours combination give the ‘Dark Green Sunset’ great appeal. I caught myself constantly taking one more look at the watch to get the confirmation that it’s a great watch. 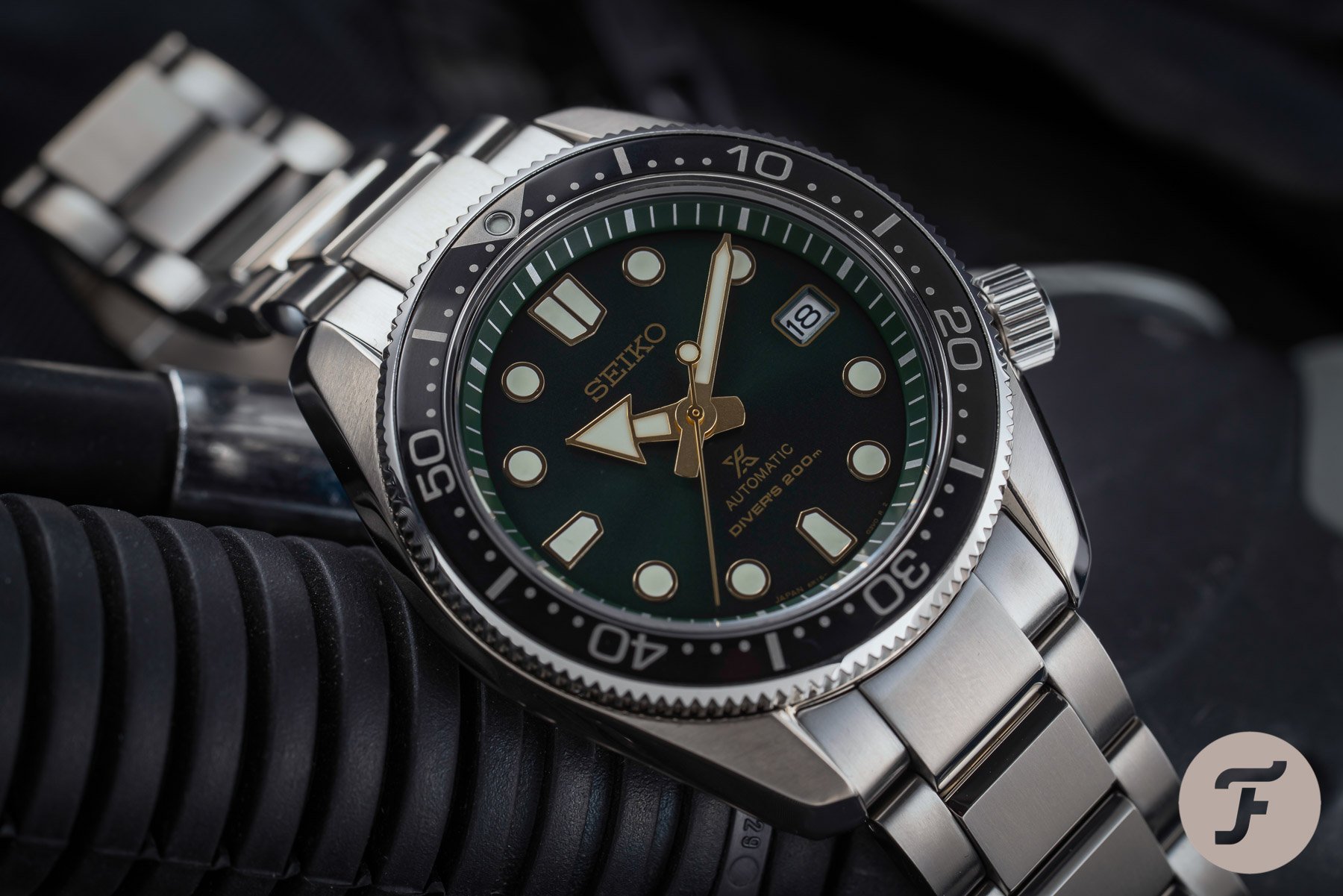 Technically the SPB105J1 is exactly the same as all the other MM200 models so the watch is powered by the Seiko 6R15 automatic movement. The 6R15 movement is a well-known Seiko movement that operates with 23 jewels, beats at 21,600 vph and features 50 hours of power reserve. Now there might be people that have questions about why the current Sumo features the improved Seiko 6R35 automatic movement that features an improved 70 hours power reserve at a lower price. The question is understandable but we have to understand that the MM200 was introduced in 2018 and the new Sumo in 2019 so the answer to the question is timing. It will be interesting to see whether Seiko will update the movement for the MM200 models over time but in the meantime, the 6R15 movement is definitely a worthy movement to power the SPB105J1. In the end, it is all about personal preferences but both the 6R15 and 6R35 movements are good reliable Seiko movements. 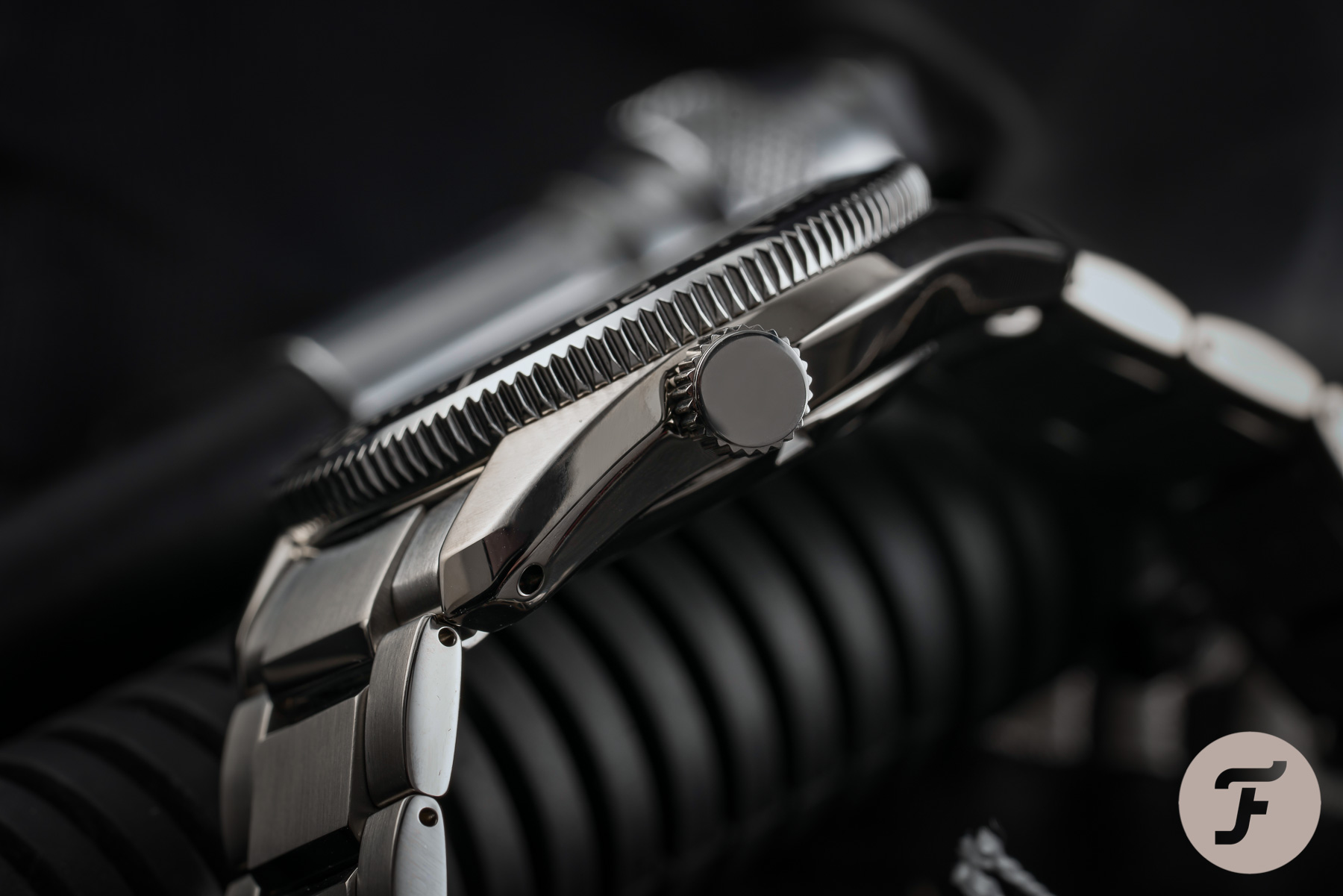 The SPB105J1 comes with a stainless steel case with super-hard coating, sapphire crystal and features a stainless steel bracelet with the same super-hard coating and has a wetsuit extension. What I like about the MM200 compared to the Sumo, is that its slightly smaller size, the lower weight, and slimmer profile make the MM200 better suited to wear on a leather strap. I have worn my previous generation Sumo on a leather strap for quite some time and although I loved the looks of the Sumo on a sand coloured suede leather strap, the weight of the watch was too much for the 20mm supple leather strap. It’s a situation less likely to happen to the MM200 considering its profile and same 20mm lug width and I can imagine a couple of straps that would perfectly compliment the great looks of the SPB105J1. 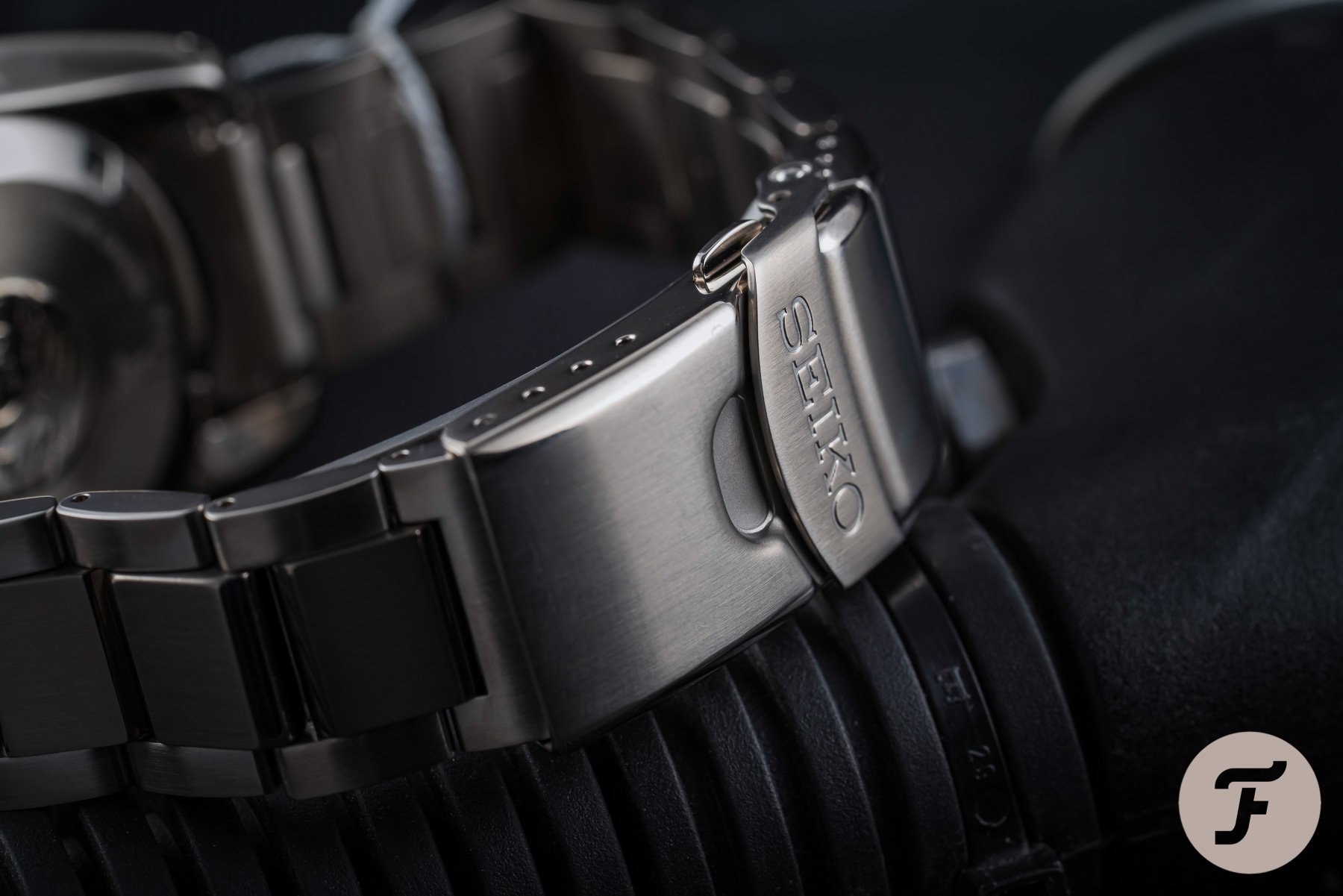 I like the special edition Seiko SPB105J1, I like it a lot. As previously mentioned, I think Seiko has overall really stepped up their game with the quality of design of the watches in the Prospex line. With the new Marine Master 300, Sumo and this MM200, Seiko has really created a couple of incredible watches that are best in class for their respective prices. At 1.100 Euros this SPB105J1 is one step above the new Sumo that is priced at 830 Euros and a step below the Marine Master 300 that is priced at 3.200 Euros. Yes, you could debate a choice between the Sumo and this MM200 based on their respective movements. What it all comes down to is personal preference.

I really like the redesigned looks and the improved movement of the new Sumo, but I like the looks of the MM200 specifically of this ‘Dark Green Sunset’ better.  Overall the MM200 or Seiko 1968 Automatic Diver’s Modern Re-interpretation collection features some very nice colourways but this ‘Dark Green Sunset’ really stands out for me. I love the colour combination of green, black and gold. It is quite probably the classiest Seiko Prospex diver out there. And it’s the configuration that brings this special edition closest that special feeling of the original 1968 Automatic Diver which makes it even better. The watch was released as a special edition for the European and US markets without Seiko stating a specific number the watch is limited to. Since the watch has been on the market for a couple of months you might want to act quickly if you want one. Something I might have to do as well.

This Seiko Prospex ‘Dark Green Sunset’ is available now, so head to your nearest Seiko boutique to have a look, or see it online on Seiko’s official site.