Today, we take a look at the Seiko SilverWave J12082, the very first dive watch from the celebrated Japanese brand.

I was recently on my way back from a long Easter weekend in Bordeaux (where, surprisingly, I’ll long remember the world-beating experience of ingesting crustaceans and shellfish over drinking wine), when I stumbled upon a review of the new Alpine A110 sports car on one of my favorite sites: Jalopnik.  I’m used to witty, entertaining articles on the site, but this one truly struck me.  First off, the A110, from everything I’ve seen and read, looks to be an outright winner and one that comes from left field as most have their eyes on the Germans or Italians when it comes to lightweight, tossable cars.  Secondarily, and also oddly (although we know that Renault and Nissan are linked), the review took place in Japan around some of the lakes near Mount Fuji.  And this article about a French car in Japan, strangely, provided the inspiration for today’s look at the Seiko SilverWave J12082. 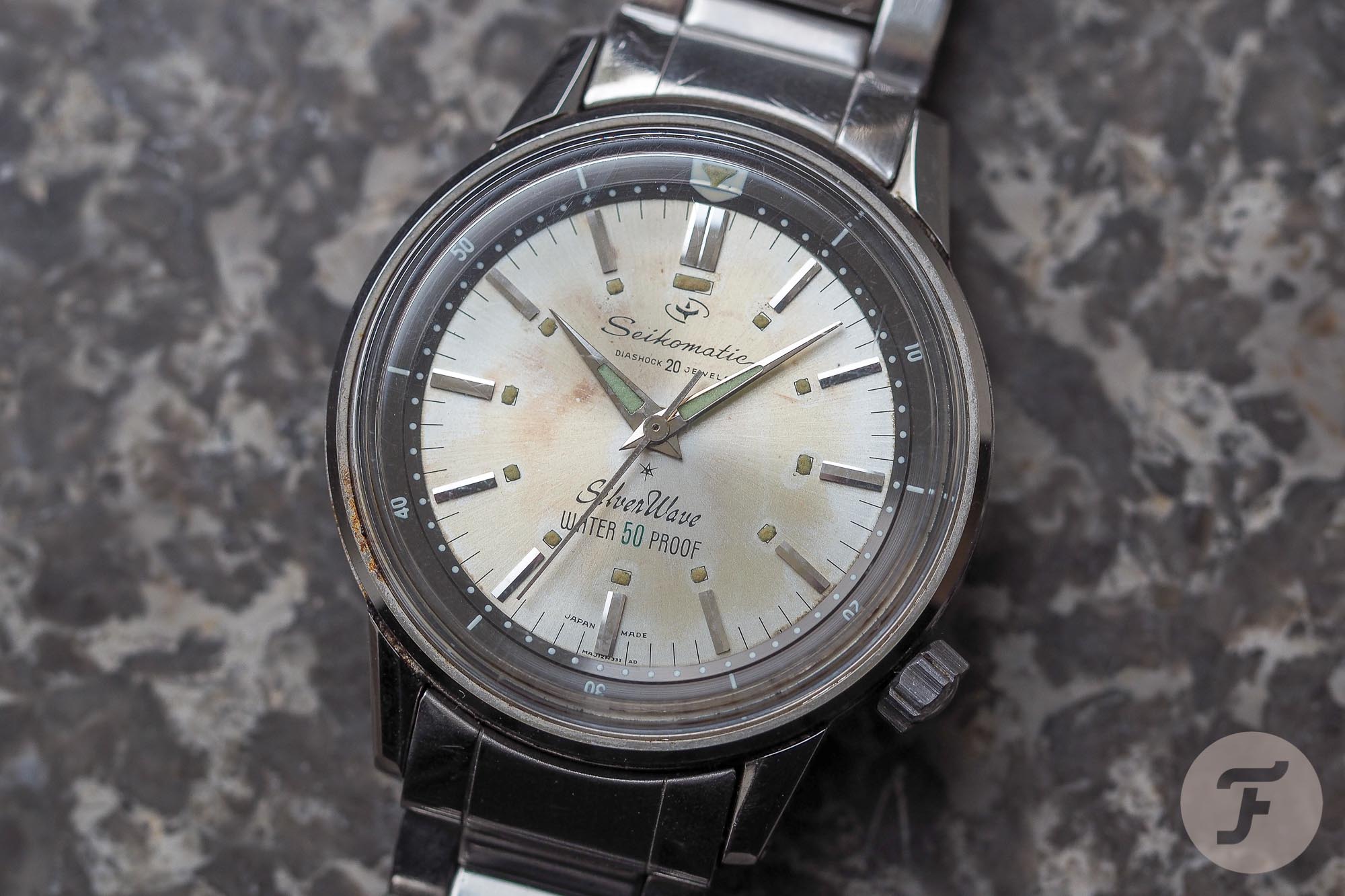 A Simple Watch = The Best Watch

You see, I’d contend that the Seiko SilverWave J12082 – like several other early attempts at divers by Japanese brands that I’ve reviewed – is about as good as it gets when it comes to wearing a watch.  Like the aforementioned A110, (and I’ll ease off from the automotive comparisons shortly) it contains little that’s superfluous, it’s light, functional, relatively practical, and there’s a link to Japan.  To me, that makes it nearly perfect. 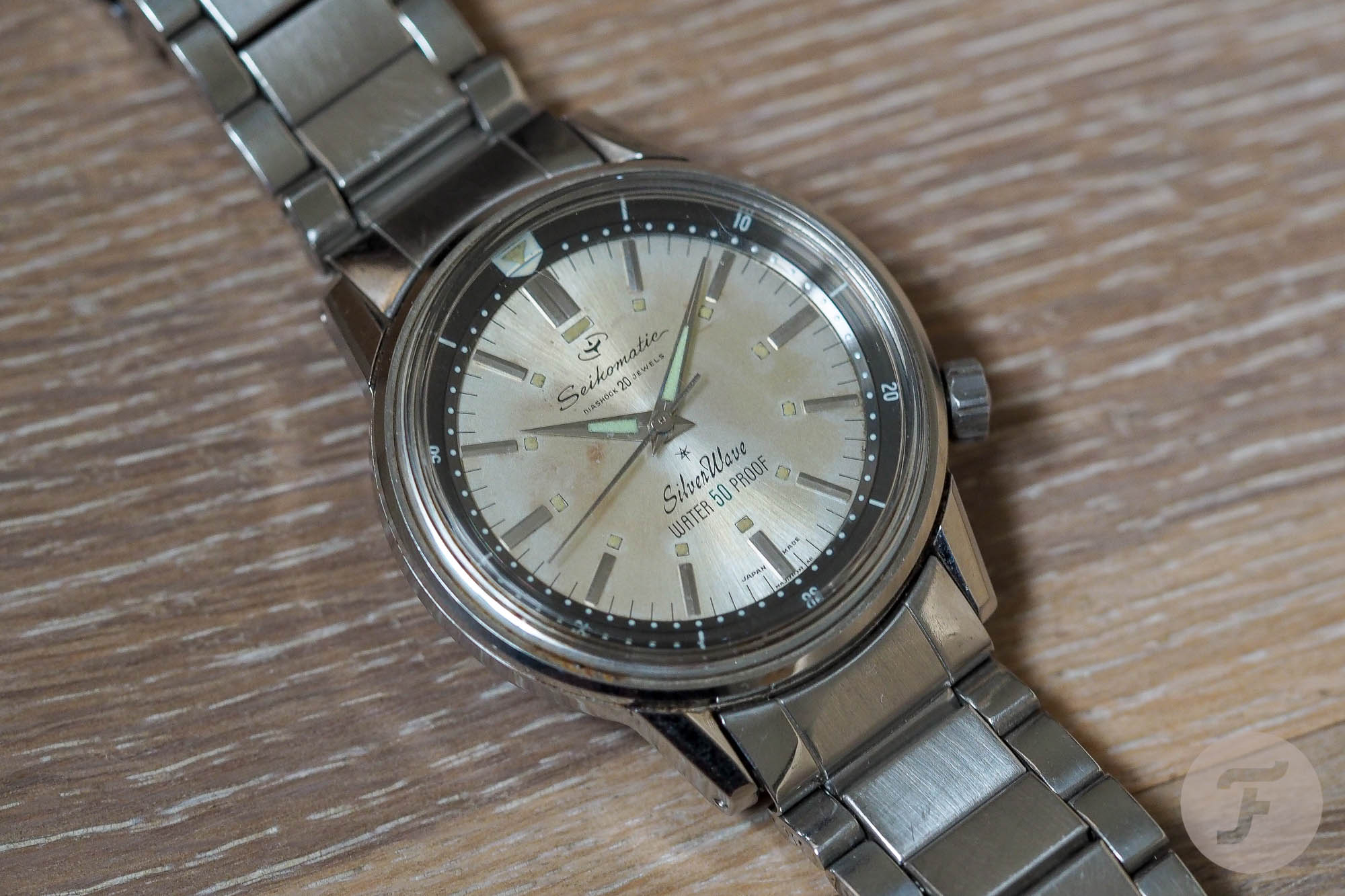 I never quite know how successful I am in convincing you that something previously unheralded or undiscussed is worth a look.  Our readers are, if nothing else, a bit unpredictable and you often comment when we least expect it while saying nothing when the topic seems rife for opinion.  So, when it comes to early 60’s Japanese light divers, I have no idea if you like them nearly as much as I do, but I’ll keep showing them as long as I find them.  Before we get into the Seiko SilverWave J12082, though, let’s recap where we’ve been on this strange little sub-genre journey within #TBT. 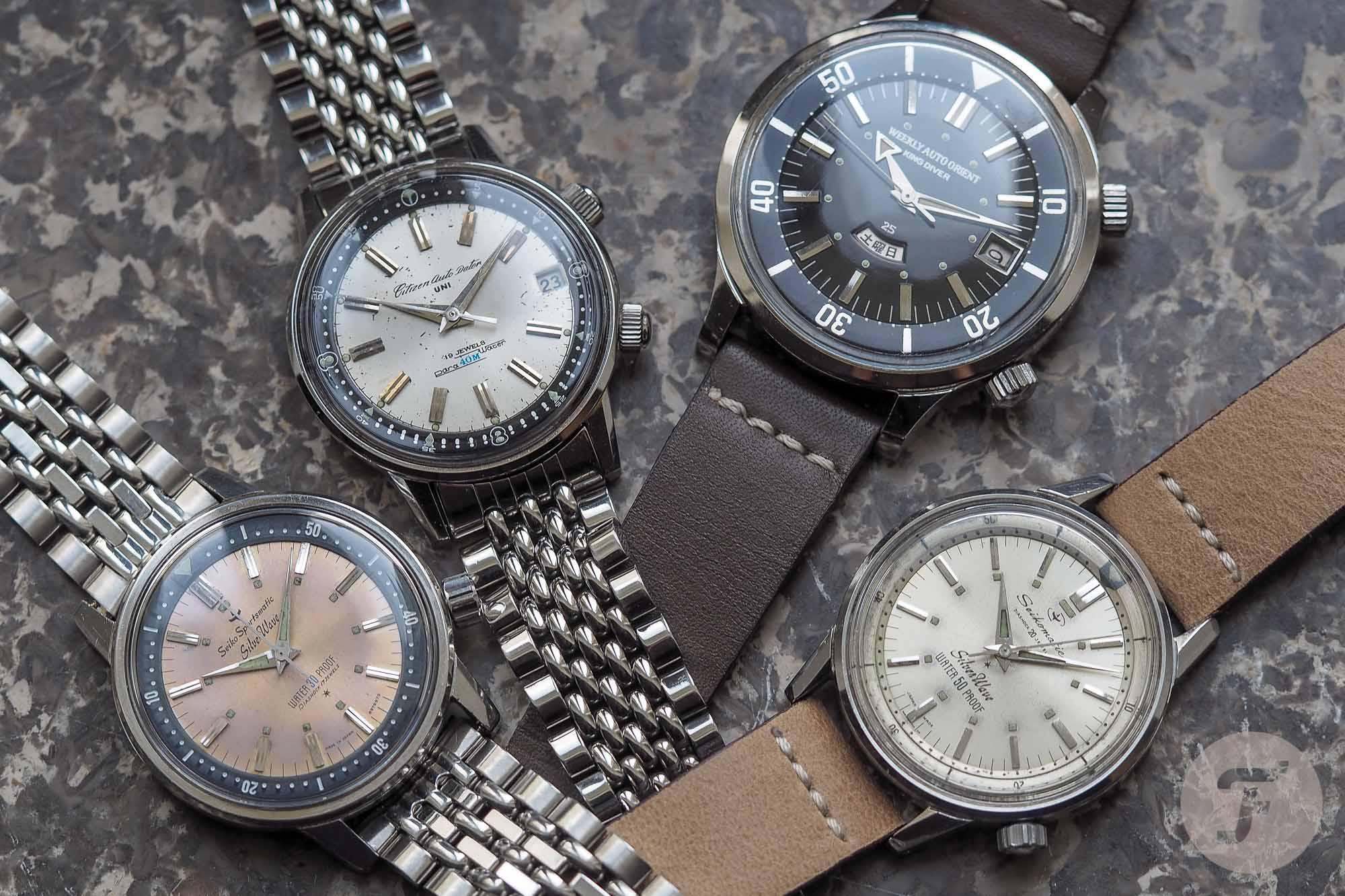 It’s hard to believe that I covered the Seiko SilverWave ref.697990 more than four years ago here.  In an odd move for Seiko, this watch was actually produced after today’s Seiko SilverWave J12082 (post 1964) and exhibits cost-cutting moves such as reduced 30M water resistance and a snap-close case back.  Still, it’s one of my favorites due to its perfect sizing and clean looks.  Then, roughly a year ago, I got my hands on a very rare Citizen Auto Dater Uni ref.ADUS31201-T.  This 40M diver is one solid watch and, wait for it, just might be the favorite Japanese watch in my entire collection – which then puts it in the top tier of most-loved pieces overall.  It’s so beautifully detailed and feels far more expensive than it is.  And finally, this last piece doesn’t really qualify as practical, but the massive Weekly Auto Orient King Diver was reviewed with its serious 42mm case, but laughable 50M of water resistance.  The watches contain a lot of similarities – aside from the silly water resistance levels – such as applied indices and crown-actuated internal rotating bezels.  Seiko, it seems, was the lone brand to forego the typical Super Compressor style of using twin crowns and opted, instead, for a lone implement to do all the work.  Perhaps that’s due to the fact that they used movements that can’t be hand wound. 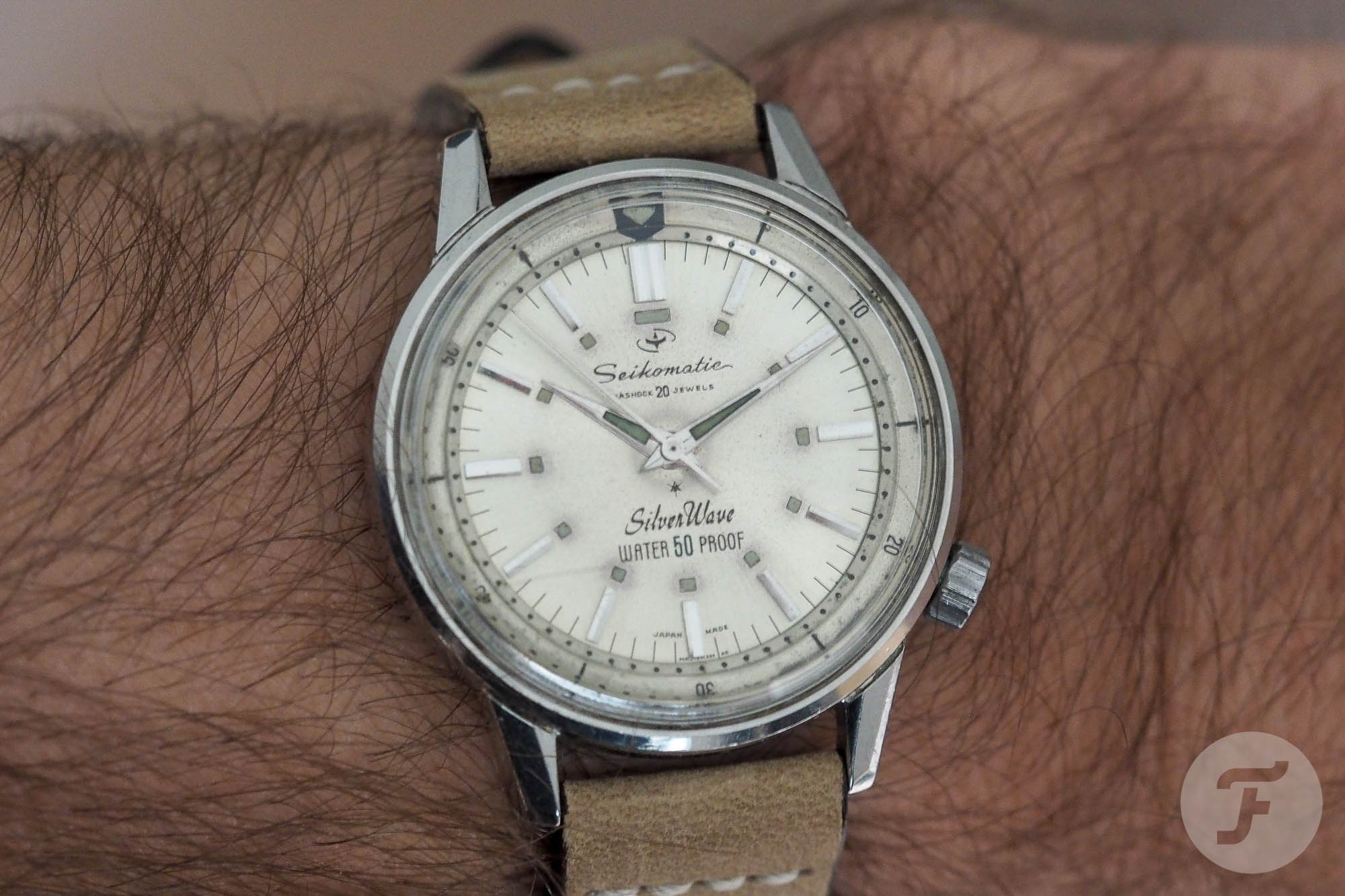 The Seiko SilverWave J13082, unequivocally, is the brand’s first attempt at a dive watch…

The Seiko SilverWave J12082, unequivocally, is the brand’s first attempt at a dive watch and for a brand that’s arguably better known for its divers than any other class of watch, that makes this reference significant.  Throughout its relatively brief production run from 1961 to 1964, the original SilverWave was offered with a variety of dials.  Black dials, white/silver dials, dials with a unique set of sunburst lines (referred to as Mark 1’s), and font changes highlight some of the changes that occurred.  Also, as depicted in today’s article, Seiko offered different color internal bezels.  Regarding the other externals and the movements, Seiko left these things consistent for the 4 years. 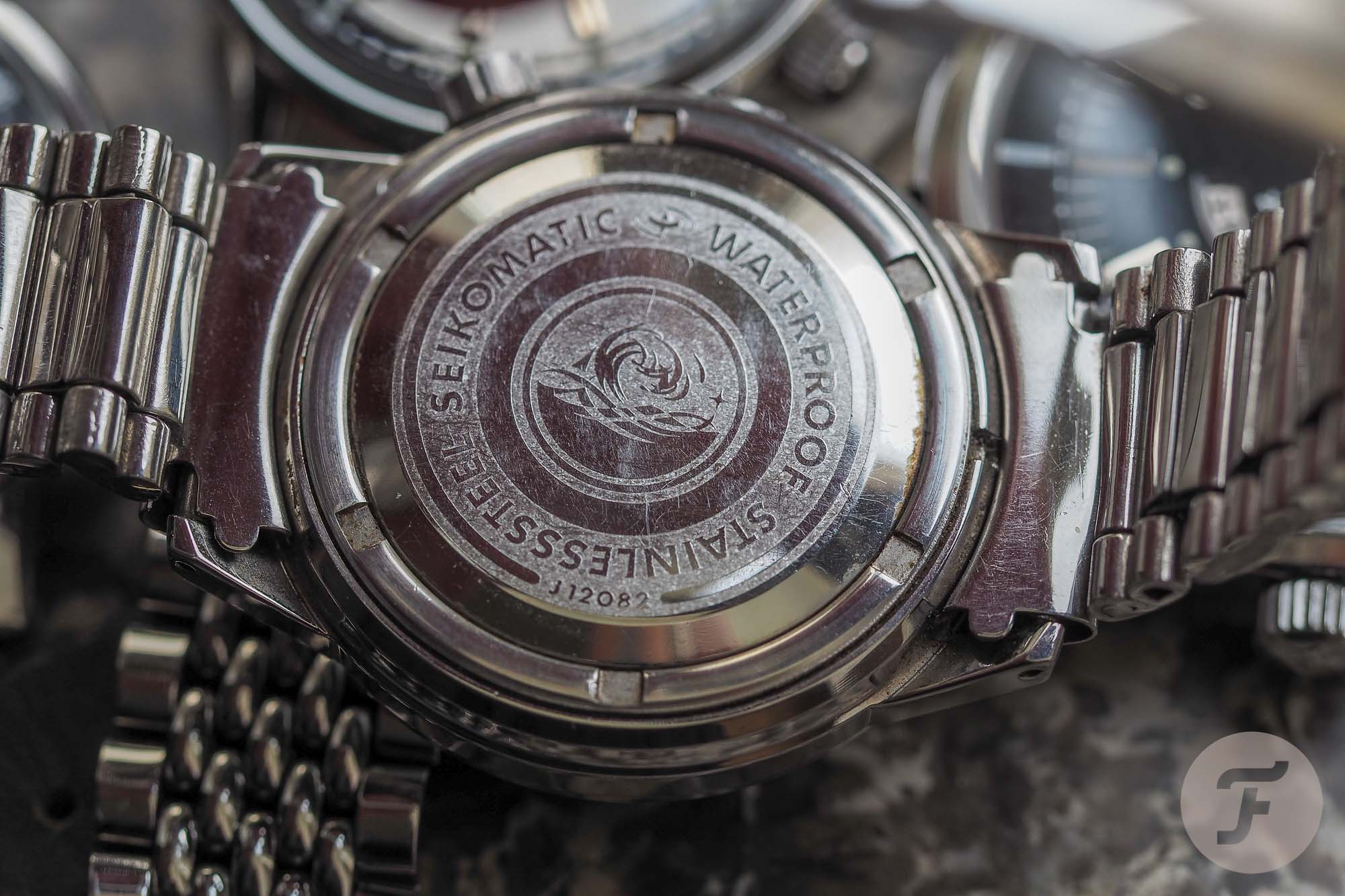 The Debut of the Tsunami Case Back

While the Seiko SilverWave J12082 was the first dive-intended piece with a rotating bezel, the watch did share at least one characteristic with another model in the Seikomatic lineup.  Specifically, I found examples of the SilverWave’s 2-piece screw-down case back on an earlier restrained but sporty model called the Cronos.  (You can see examples here within this informative article.)  Where the SilverWave differs from the more staid Cronos, though, is in its debut of the now-famous Tsunami motif.  Yes, this hallmark of Seiko divers has been around for nearly 60 years!  Unlike current Prospex models with this symbol cast in relief, it seems that Seiko chose to use something akin to the silver wax found on scratch-off lottery tickets.  It’s exceedingly delicate and, therefore, relatively rare to find an early SilverWave with a minty case back.  You can see that one of mine is in really nice shape and that the reference number can be read along its edge.  As per typical in the early 60’s with Seiko, no serial number is found on the outside case back of the watch – they’re on the inside and I’ve not taken this one apart quite yet. 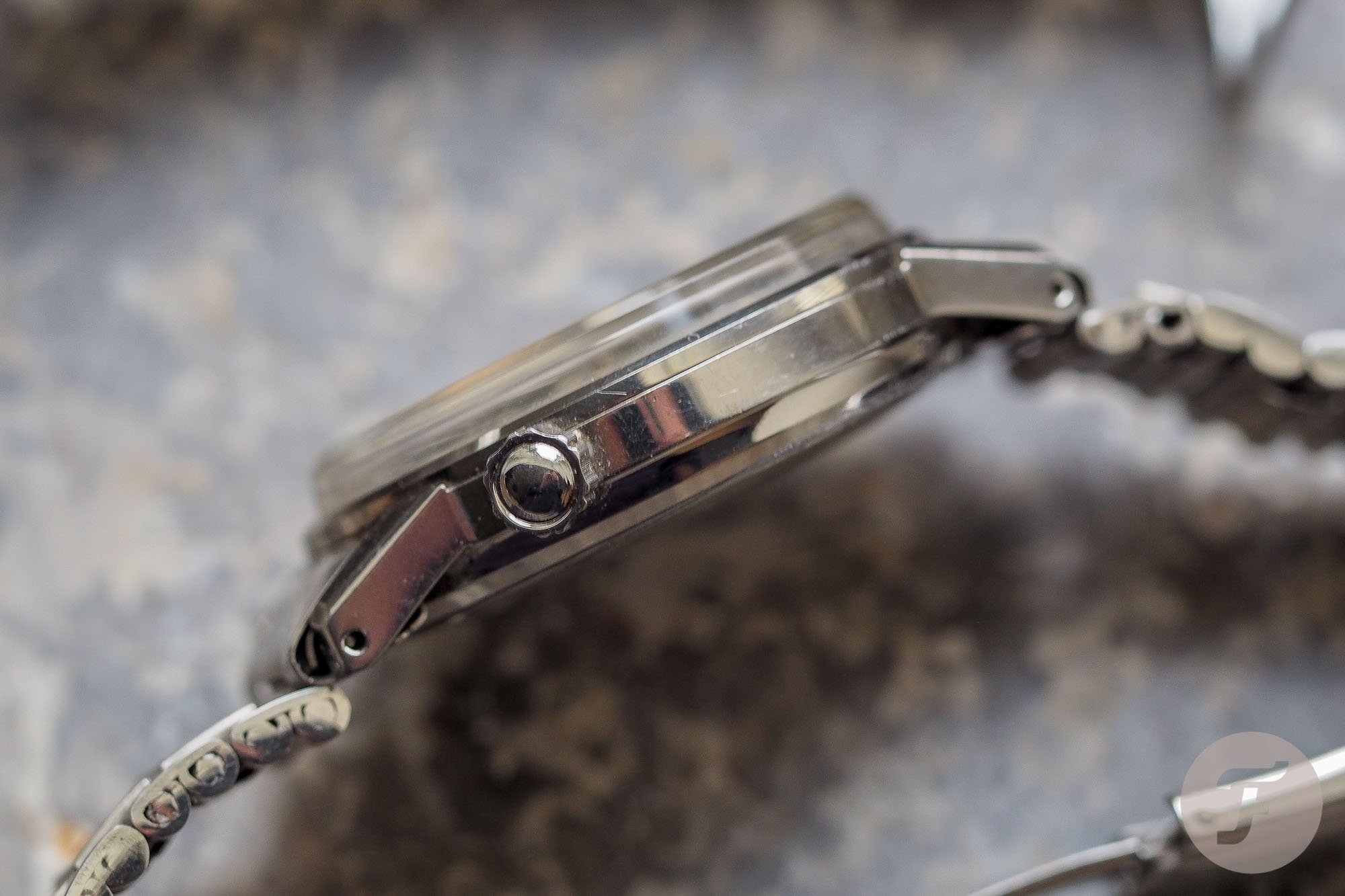 I’ll agree that reviewing the Seiko SilverWave J12082 after taking a look at its successor, is a bit backwards, but it took me some real time to track one of these – and then they came in multiples.  Still, it’s worth going through the details.  Similar to the later model, the 50M edition contains a big ridged crown meant to be used in either slippery (wet) conditions or possibly with gloves.  It contrasts nicely with the svelte all-stainless case that comes in at 37mm and gives the watch a bit more visual heft than, say, a normal three-hand Seiko of the time.  (Of note, perhaps it was a bit harder to turn that bezel when the watch was new, but you’d be foolhardy for using this for more than an egg timer now.  The crown rotates very easily and, therefore, turns the bi-directional bezel.)  You’ll also find applied silver markers with lumed rectangles at the inside edge of each.  Lume wasn’t a common thing for Seiko at the time, so when we see it on the triangular hands and at the top marker of the internal bezel, it’s a sure sign that you’re viewing a watch with sporty intentions.  Another desirable trait of all early SilverWaves is the use of some lovely script on the dial.  I’m usually not an admirer of so much writing, but it’s nicely done here with a real mixture of styles and even a dash of blue color to denote the water resistance. 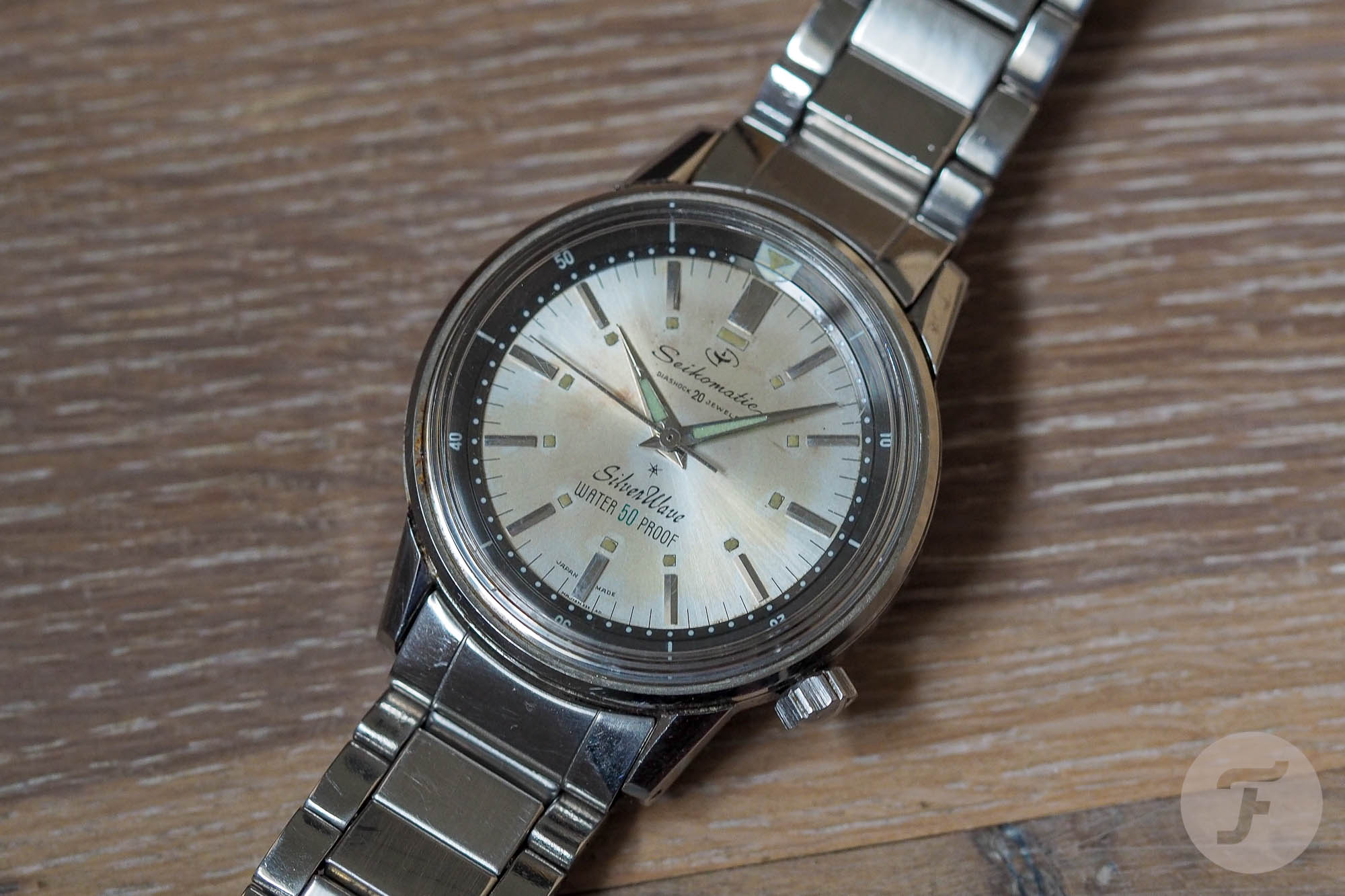 Inside the Seiko SilverWave J12082, we find the Seikosha Seikomatic cal. 603 automatic.  It’s nothing uber fancy with its 20 jewels and 18,000 bph frequency, but it was later renamed as the 6201 and it’s the basis of all 62xx movements we know and love from watches such as the 62MAS and early 6215 300 meter diver.  Like with most Seiko’s it cannot be hand wound, but as is also the case with most movements from this period, one only has to pick them up to get them moving.  That’s pretty impressive, but it does make keeping the watch at a photogenic 10:10 quite difficult – a first world problem indeed. 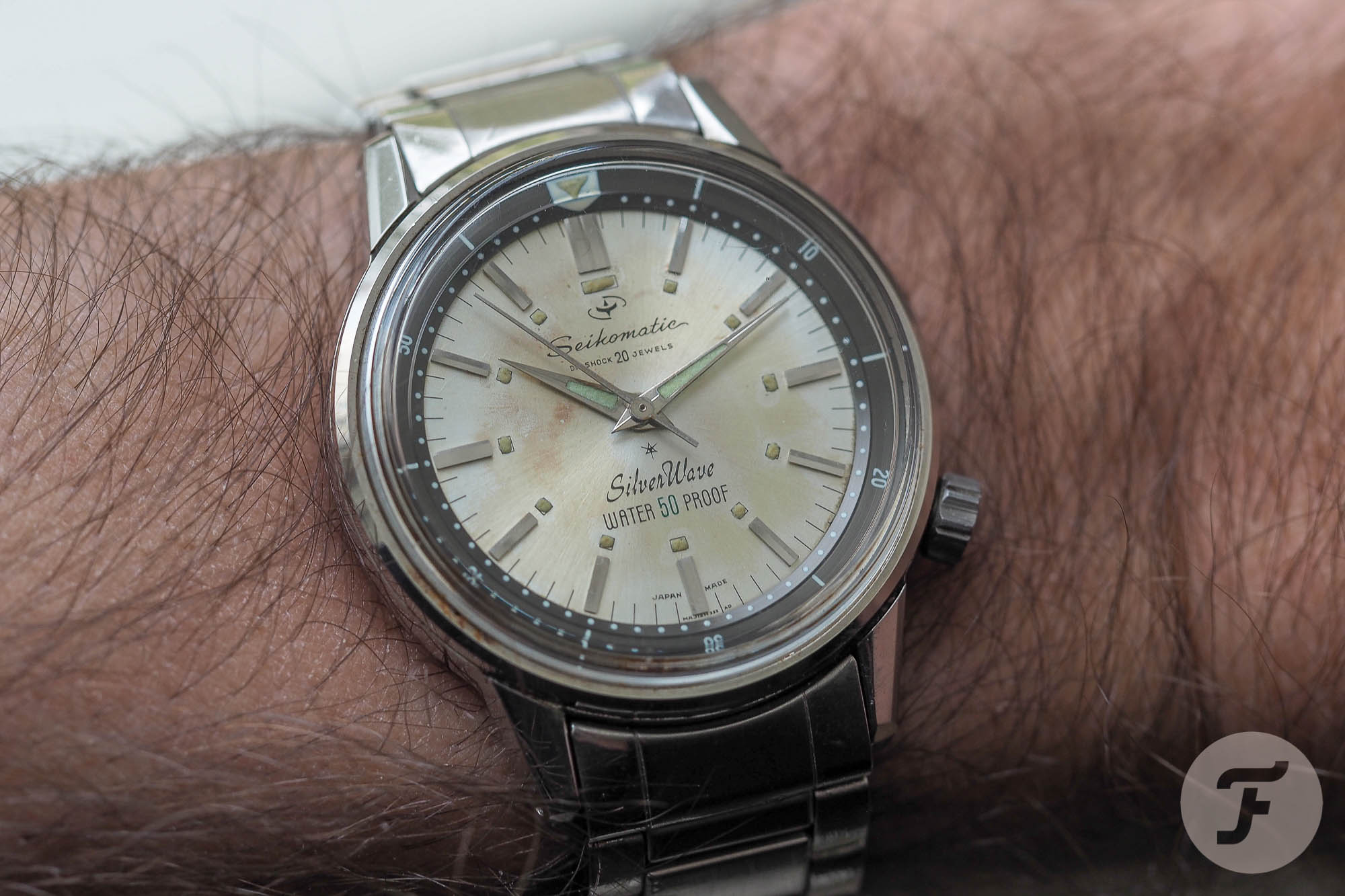 The Seiko SilverWave J12082 comes in at 37mm in diameter and roughly 44mm in length, so it’s an extremely comfortable wear.  Whether on a strap or on the lovely original stainless bracelet with spring loaded clasp (why don’t companies make these today?), it’s a good look – and drilled lugs make changes simple.  It looks a bit smaller than its similarly sized 30M successor due to a number of factors.  I measure the lug width at 18mm versus the later model’s 19mm, but it’s more than that.  A tall acrylic crystal with angled sides and a flat top bring in the size of the dial.  Plus, the internal rotating bezel slopes downward sharply towards the dial and this makes things look smaller.  Finally, the lugs themselves are artfully sculpted – there’s no doubt that this watch was a more expensive piece to manufacture than the later version – and somewhat thin.  There are no negatives here, just stylistic differences that add up to a more expensive looking watch in the 50M variant than what would come later with the 30M. 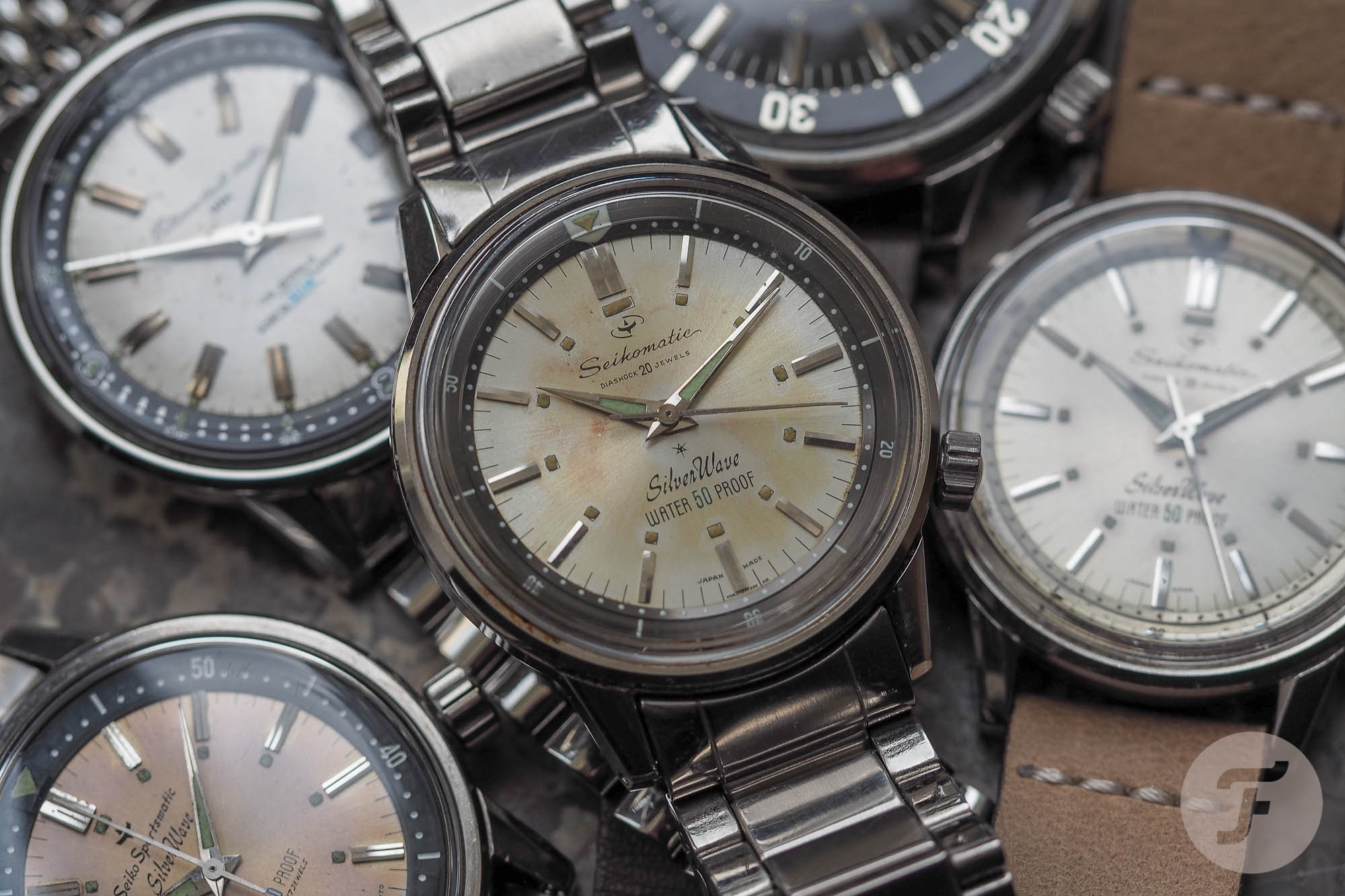 Clean Pieces are Hard to Find

Hunting an early piece like the Seiko SilverWave J12082 can be challenging.  I saw so few for sale over the past 5-6 years, but then a few popped up and I was fortunate enough to win them.  The piece on the bracelet arrived as is and was apparently a one-owner watch from Japan, while the other came with a shattered crystal and refused to run.  A third piece is still in the spa, so let’s see how that looks when finished.  You’ll note that each of these has some dial staining and that’s not uncommon.  The seals for these watches – especially at the crown – deteriorated over time and it’s not hard to imagine that daily moves in and out of cool indoor spaces to the hot and humid let in some moisture.  Plus, let’s be honest, they weren’t overly water resistant to begin with.  So, if you’re out for a perfect piece, they’re out there but you’ll need loads of patience.  There are other things to watch out for on these watches such as the case back condition.  Also, original crystals come up, but rarely.  One of these pieces has an original and the other has an aftermarket substitute that does a decent job.  Also, if an internal rotating bezel no longer rotates, it’s likely shot.  On the positive front, the movements are highly serviceable as there are plenty of donors in existence on less desirable watches. 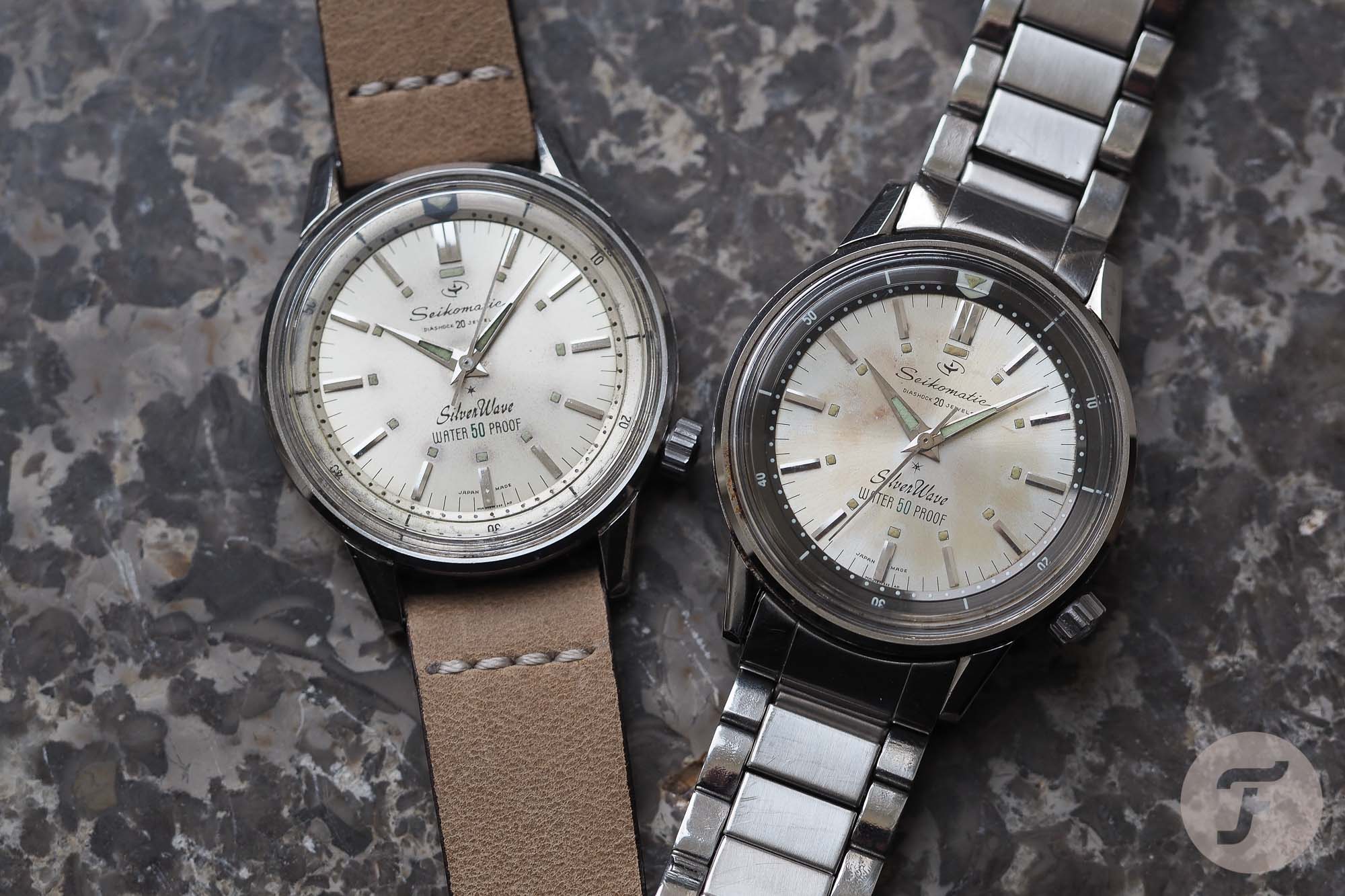 With pricing in the $500 – 1000 range (and creeping upwards steadily), the Seiko SilverWave J12082 represents an important milestone in Seiko history as the first diver-like watch.  More than that, though, it’s so wearable as an everyday watch and exemplifies a watch that could be worn with about anything and, in its day (with a fresh set of seals), could do about anything.  Perhaps that’s why I liken it to a simple, sporty 4-cylinder sports car that feels good to use.  If that comparison doesn’t work for you, then just trust me that this would be one of the more satisfying, and practical, vintage buys for your collection.