Seiko’s 6309 diver is one of those watches that everyone seems to know and love. Instantly recognizable due to its bold case shape and stark dial, I’d say it’s one of the more important watches created during the last 30-40 years. In today’s #TBT, we’ll take a closer look at the famous 6309 and try to explain why it’s so beloved. I’ll also highlight its dark side, which actually makes the thrill of the hunt, and the kill, that much more enjoyable when a proper piece is located. 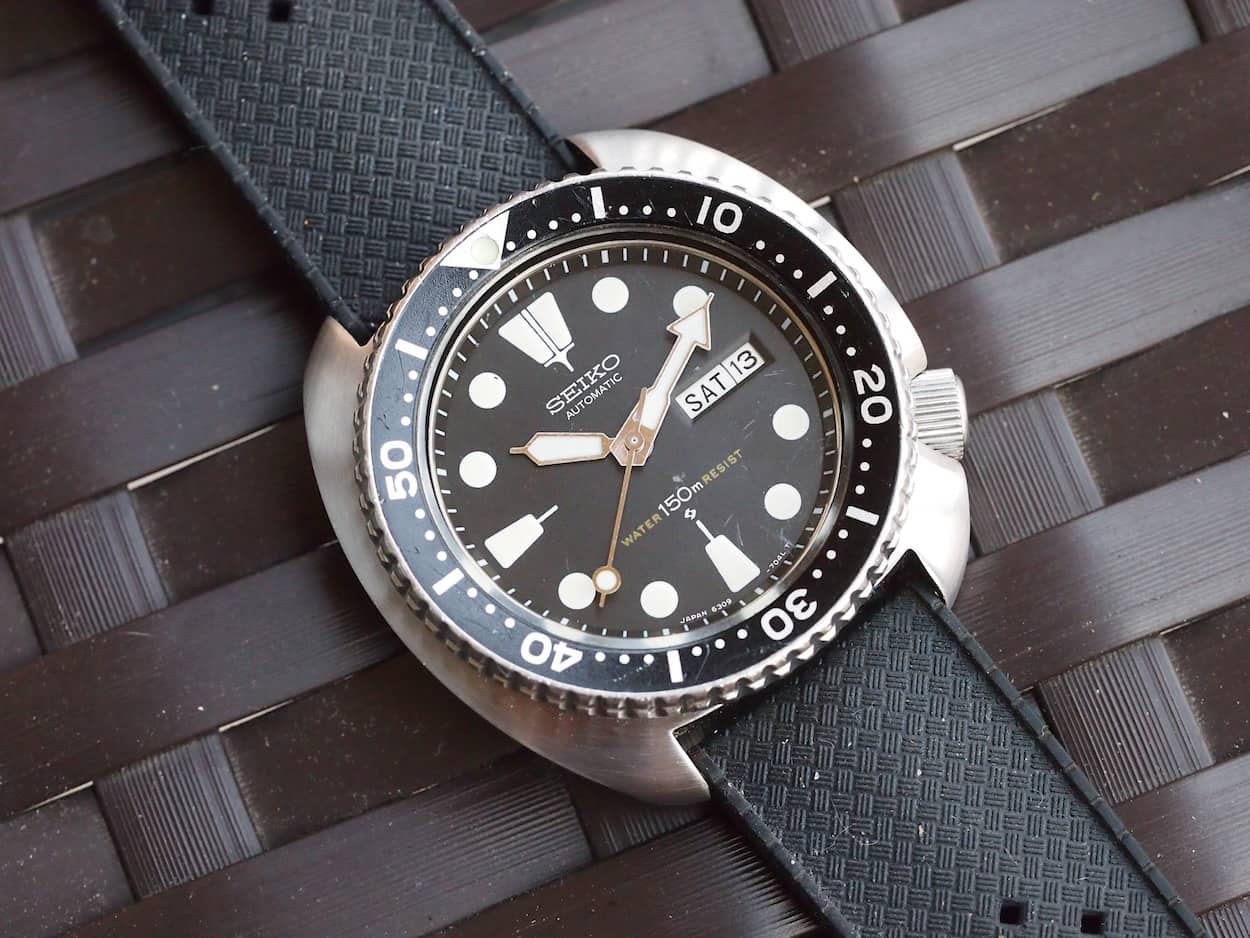 The 6309-7040/9 was introduced in 1976 and lasted an incredible 13 years through 1988. The 7040 nomenclature refers to a model sold to the Japan market and the 7049 is rest of world which was primarily the USA. In comparison to the seemingly eternal run that today’s descendant, the SKX007, is on, this doesn’t seem like much, but it’s still quite a lengthy period. The Seiko 6309 replaced the beloved 6105 that we reviewed here. It kept an evolution of the 6105’s cushion case alive, but brought in a far more modern dial design. It also gained a handset partially reminiscent of a watch introduced only a year before: the 6159 Tuna. We will review the details more thoroughly momentarily, but if I think back to other divers on the market in 1976, let’s make it easy and use the matte-dialed Submariner, the 6309 must have looked quite modern. 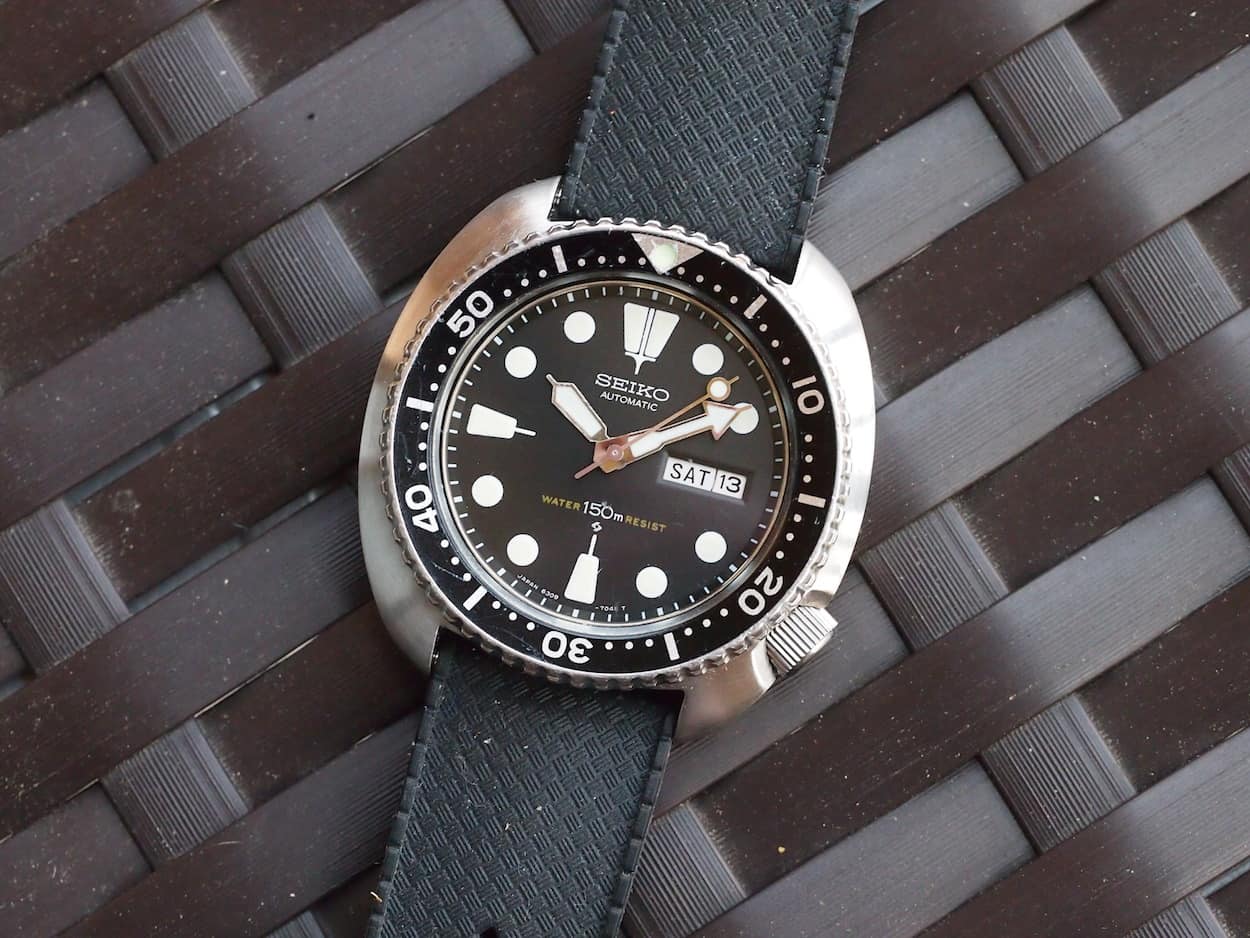 The Seiko 6309 features a stainless steel case with screw-down crown and case back. It measures at roughly 45mm in diameter, which makes it seem like quite the bruiser, but it somehow doesn’t wear that way. Perhaps it’s due to the short lugs on this cushion case, but the watch wears a bit smaller than its size, yet it’s still offers a strong presence. I noted the screw-down crown and unlike its predecessor, this crown has some serious size. It kicks off Seiko’s tradition of going unsigned and having a circular face that is raised and of a smaller diameter than the ridges used for turning said crown. The knurls of the crown are actually completely flush with the case at the, roughly, 4:30 position, but extend past the case at about 3:30. The extension past the case, and the large crown size in general, add visual mass. The case itself features a brushed surface when looking at it “head on” but is polished on the undersides. It’s nicely chamfered around the crown area as well. It’s actually a rather complicated design that again, picks up where the previous 6105 departed. It’s organic in form and where so many 1970’s c-case shapes look heavily dated, this somehow still looks elegant and timeless. There’s no doubt about it, Seiko could, and should, still be making this watch today ad it wouldn’t look out of place. A 22mm lug width makes a dramatic move from its 19mm predecessor and also serves to add size to the watch. 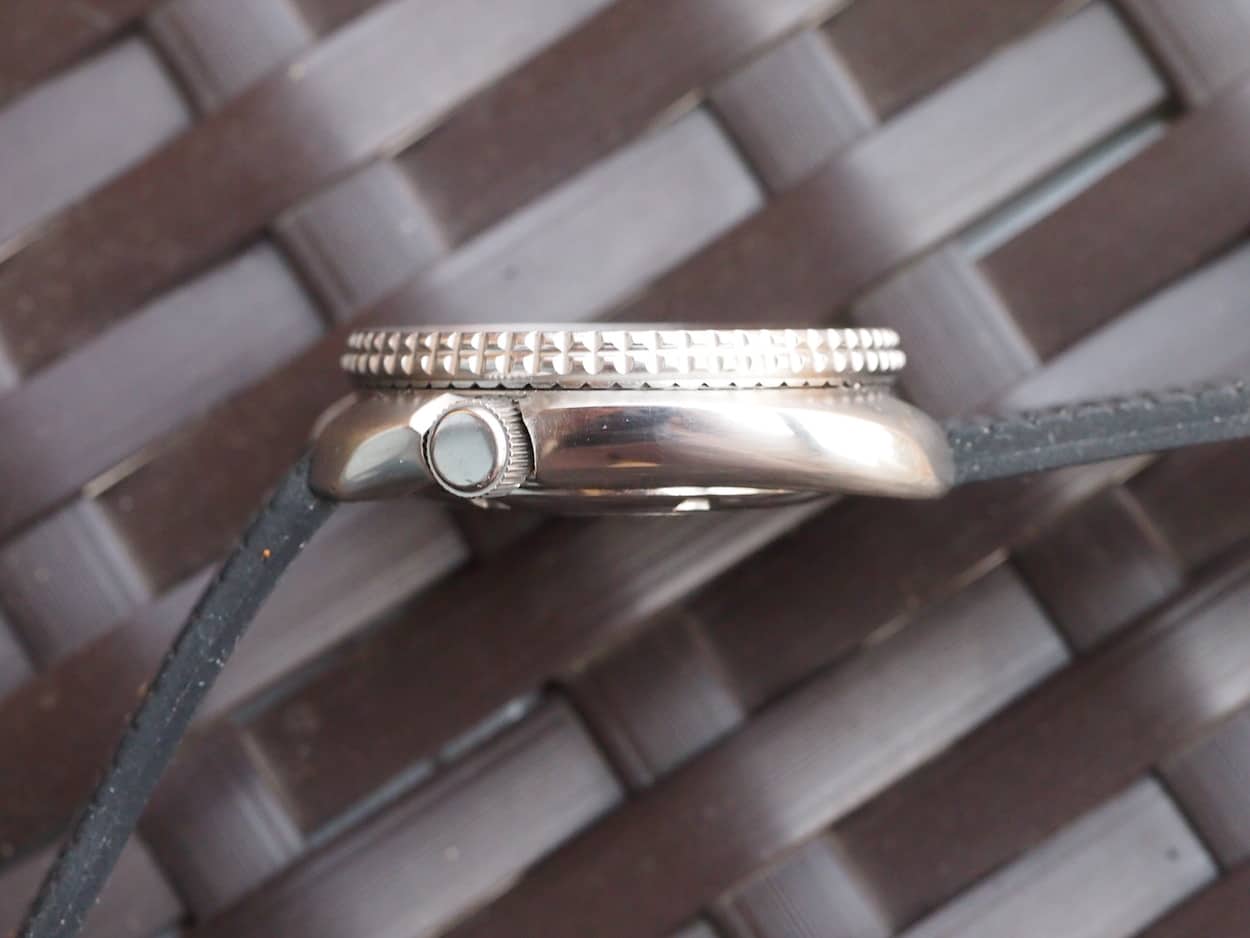 Moving on to some other visual aspects of the Seiko 6309, we have a bi-directional bezel, which if viewed in profile, leans inward towards the dial. It features two rows of squared knurling and firm clicks afforded by the visible teeth on the underside of the bezel. Up top, the bezel insert contains the familiar Seiko font and triangle at 12:00 with lume pip. Interestingly the insert actually slants downwards to meet the Hardlex crystal. In fact, the insert is almost flush with the crystal. About that crystal…it’s fine and does what it should, but I’ve left my photos largely unedited to show you how easily it chips and scratches. I suppose it adds character, but it can become annoying. 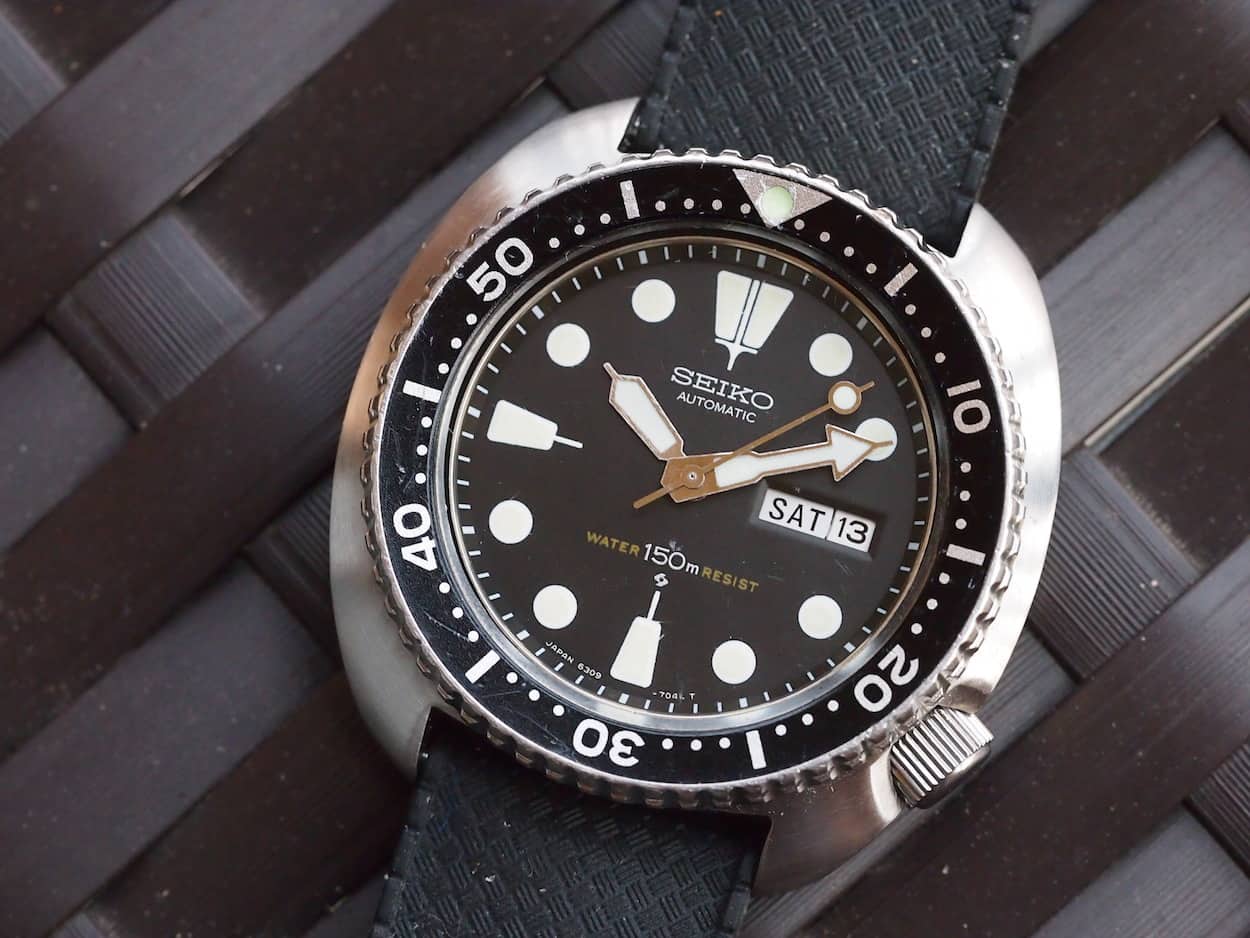 The dial on the Seiko 6309 is a masterpiece and, like several other dive watches, is a lesson in simplicity. The famous “sword” hour index at 12:00 is a great design and is complimented by circular lume dots at the hours and smaller 12:00-like shapes at 6:00 and 9:00. As mentioned, the hands are somewhat similar to those found on the 6159 Tuna and feature polished edges with lume fill. The sweep seconds hand has a lollipop circule near its end. The day/date wheel is white and sits within a chamfered, but not surrounded, window. Writing on the dial is all printed without and applied nomenclature. It’s serious looking and basic. “Water Resist” that has turned from red to yellow on this version surrounds the 150m notice. This change is a common occurrence and looks good. Since the model we see here is from 1977, it’s in the first batch (from 1976-1980) that has a Suwa symbol above 6:00 indicating Japanese production. Later models after 1980 were made in Hong Kong for cost savings (that sounds funny now) and the Suwa was no longer seen on the dial.

Inside the 6309 is a 6300-series, 17-jewel automatic movement. It’s a non hand-winding or hacking piece that does a nice job, but I’ve never found it to be overly accurate. Also, perhaps owing to the watch’s workhorse nature, they tend to be worn when purchased and require a service. Mine didn’t really run consistently upon arrival and then stopped running about 3 months after service again. My watchmaker mentioned that parts on these watches are becoming more and more difficult and are generally coming from scrapped pieces. It’s interesting that Seiko doesn’t really or truly support this piece directly despite it’s massive production totals over 13 years. 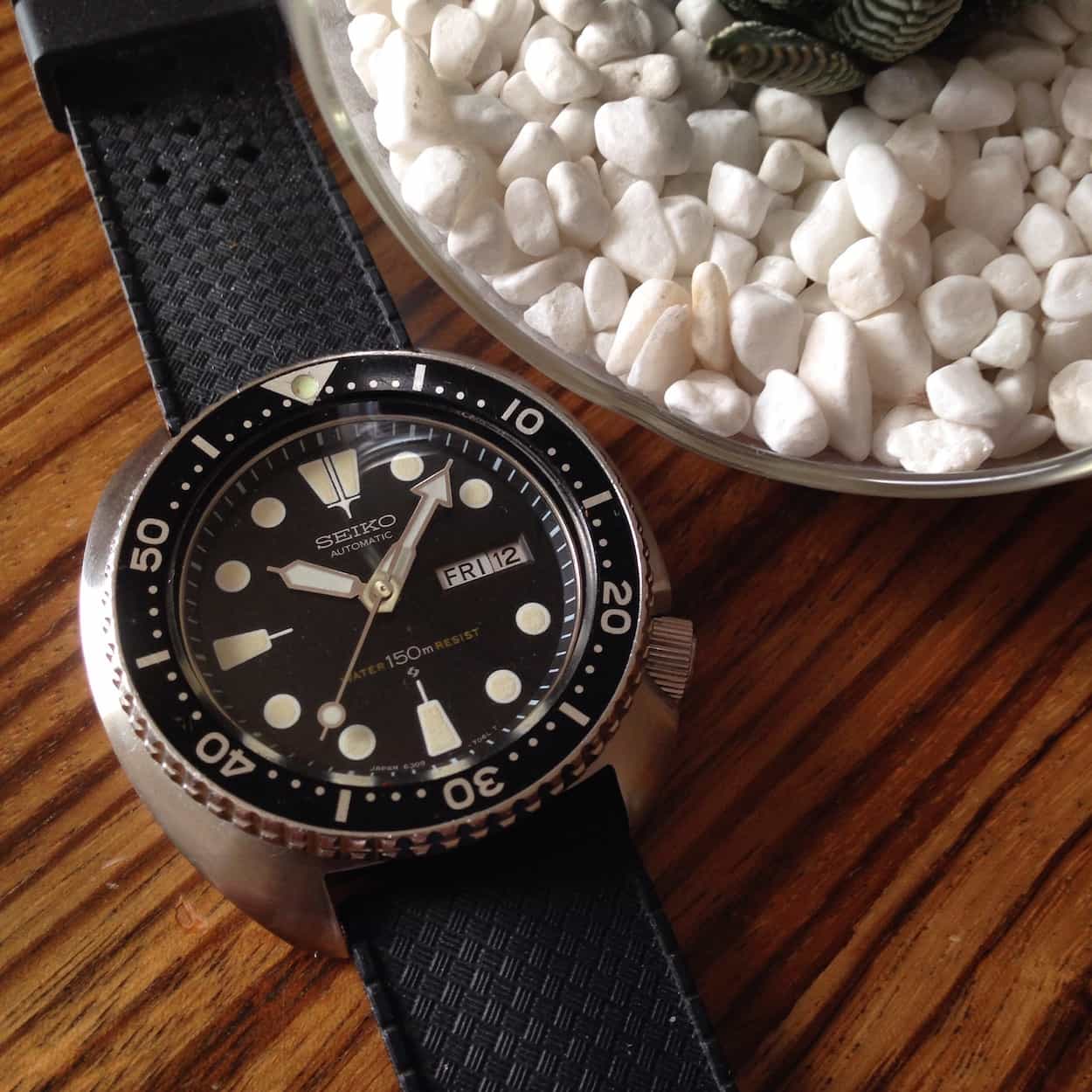 I became interested in acquiring a 6309 once picked up my 6105. I wanted to collect the series of Seiko divers and this seemed like a natural next step in the process. I’ll get to the interesting part of actually receiving the watch in a bit when I speak of its flaws, but I’ll stick to my first impressions of the watch for now. So, yes, when I first received the watch, I have to say that I was impressed but not nearly as much as when I received my 6105. Upon first looking at it, I felt it was less elegant and with its 22mm lug width, a bit too clunky. Honestly, it took me awhile to appreciate the subtle details of the case and the dial design foresight that Seiko introduced 40 years that it is largely still with us today. I think these aspects are what make the watch so collectible and desirable today. Also, there’s the fact that this watch was in high demand while it was made and that drives a lot of the love today. People saw this watch on a lot of wrists years ago and some even owned one. In fact, you see some for sale today that were possibly just retired within the last couple years for something newer or more reliable for diving. 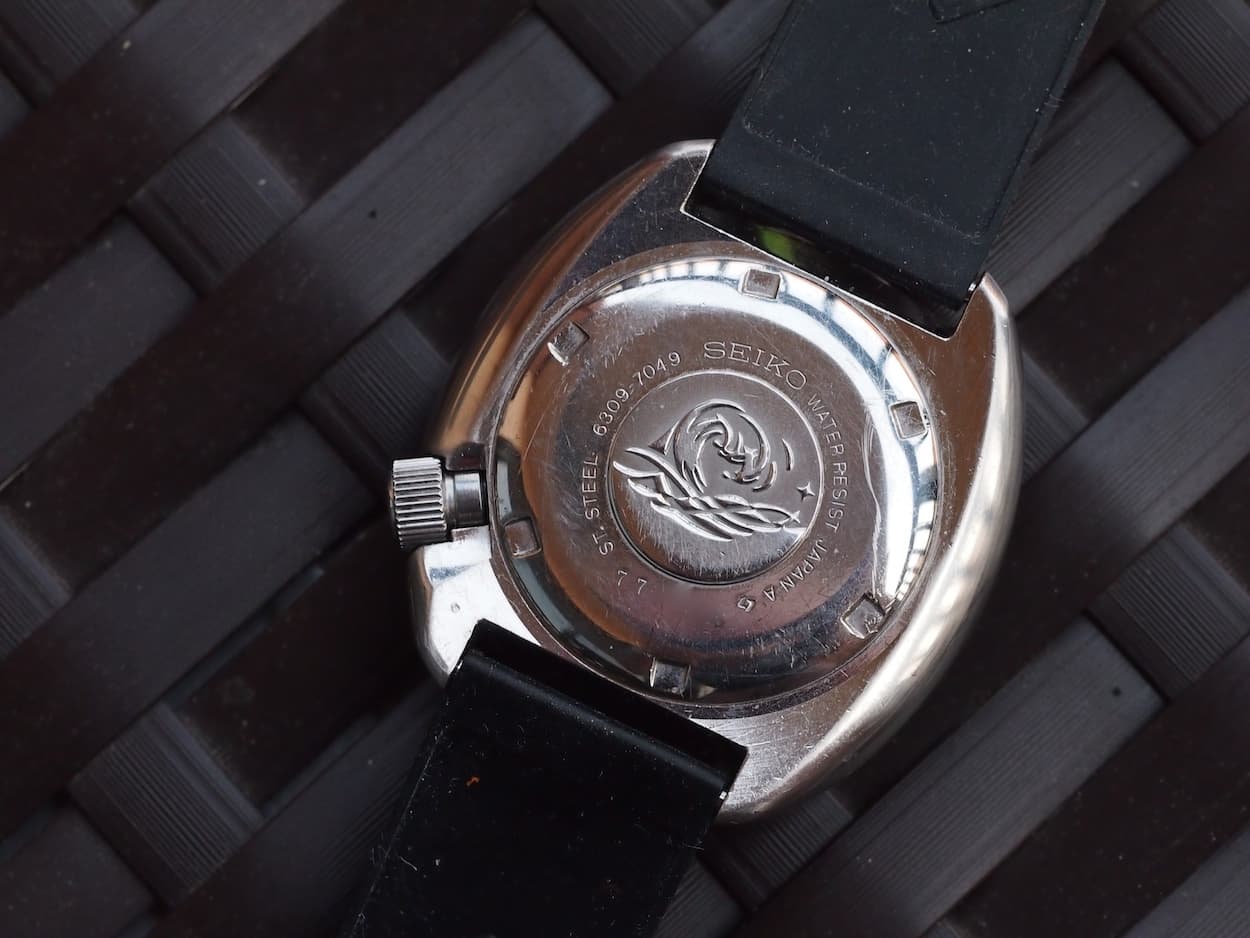 If we speak about flaws on the Seiko 6309, the biggest issue, functionally, is the crown tube. You see, on most dive watches, including Seikos before and after, the threaded crown tube is inserted into the case and is, therefore, removable and replaceable. On the 6309, however, the threaded tube is integrated into the case. So, if it becomes stripped, and this happens with great frequency due to dirt and “misfires” upon using it, the watch is essentially a throwaway and becomes a parts piece. Also, without the crown screwed in, it certainly creates an opportunity for moisture entry, which has likely led to many 6309 fatalities. I actually bought the 6309 you see here on eBay a couple years ago due to its gorgeous dial and hands and what I thought was a good overall watch. It was decently priced, but it was not cheap and I had not done my homework. I had it shipped to a relative and didn’t see it for some months later. When I finally got it, I noticed almost at once that the crown did not seat flush against the case and knew, that unless some removable dirt was trapped inside the crown itself, I was likely in trouble. I ended up shipping the watch to my watchmaker and sure enough, the case was destined for paperweight status. Thankfully, he had another case.

The other issues I have with Seiko 6309’s is that they are often faked and sold with aftermarket parts. So many of these were sold into tropical climates and used for their diving purpose. They weren’t cheap watches, but they weren’t watches that often received routine servicing. Therefore, leaks occurred, rust followed and parts were often replaced with cheap aftermarket parts. For example, at any given time, I would say that eBay is filled with 30-40 franken pieces and only a few decent pieces. 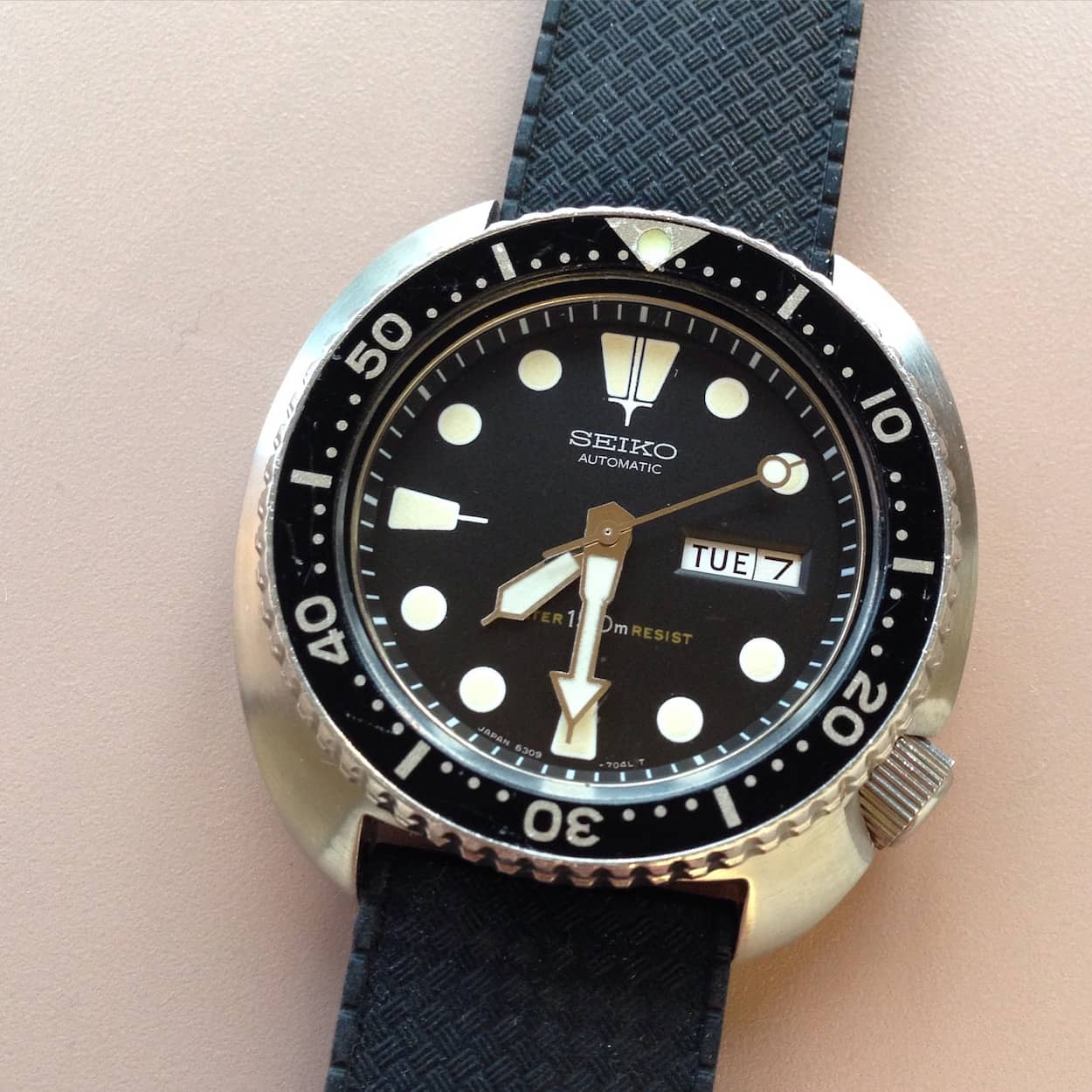 When we come back to wearing the watch, you’ll see I’ve paired it with a silicone strap from O.Frei that has a Tropic design. I went this way, as it’s more pliable yet subtler than a thick NATO. The Seiko rubber straps, either new or old, are just too massive and stuff for me. Incidentally, people clamor for the original, flat vent GL-831 straps. They come up every so often and can be found as part of the deal from time to time. 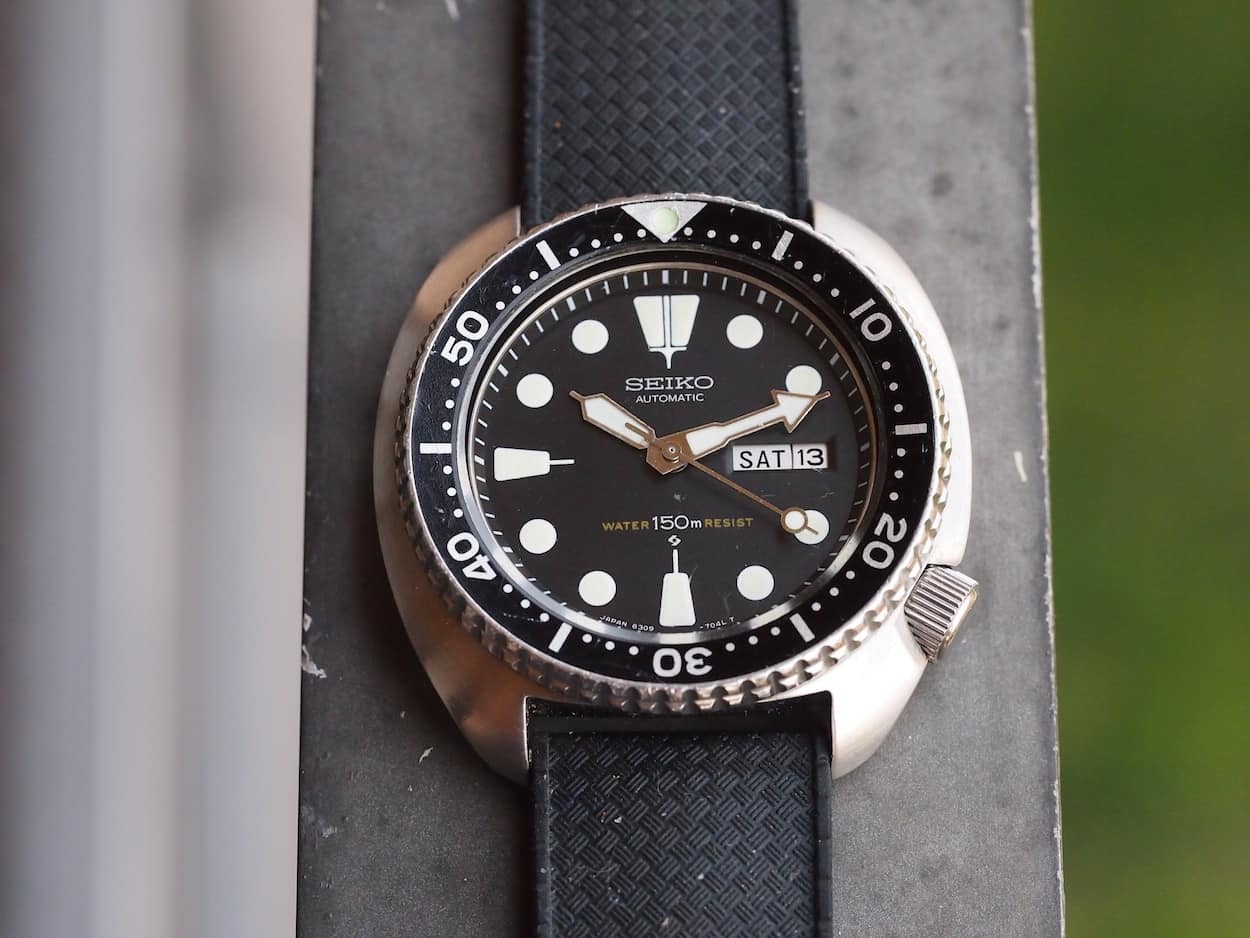 I mentioned some things to look for when buying a 6309 but I will refer you to this excellent posting that highlights some details. Despite all the warnings, if you’re looking for a decent 6309, prices are all over the map. I do feel strongly that this watch will continue to climb in value and we’ve seen a bit of that over the past 1-2 years. Specifically, I’ve noticed that $400-500 used to pick up a great example and $600 is now not out of the norm. The $250-300 pieces are out there and are occasionally ok, especially when sold by a novice, but they are often riddled with issues or contain some serious wabi on the dial and/or hands. My advice is to buy a good one and to spend the money up front.  I’m pretty bullish on these as they’re the last of the “vintage” Seiko divers and they’re so darn popular. It would not surprise me if these reach $800-900 in the next 3-4 years. 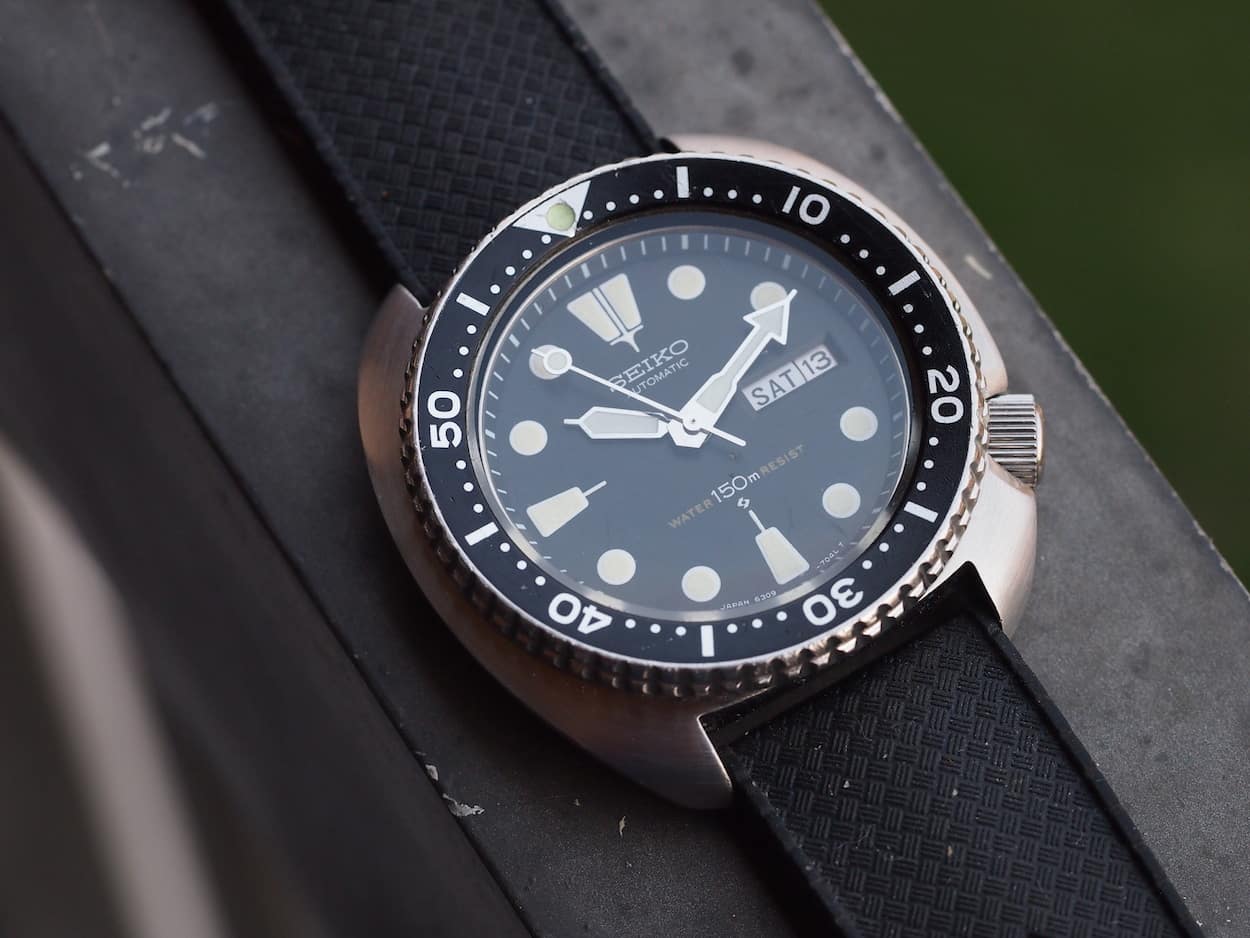 I hope you enjoyed taking a look at the Seiko 6309 diver. It’s a cornerstone piece for any collection and it looks good in most settings. It’s also one of those watches that tend to get the respectful nod from those wearing watches 10-20 times more expensive. I still see pictures of people diving in these and while I would rather throw on a SKX007 for that job, I suppose it does give some credibility to the overall build quality on a well-kept piece. As always, ask loads of questions before going down the potentially tricky path of sourcing a 6309. If you’re like me, it might take you a little while to warm up to the watch, but if you’re like the majority, you’ll adore it immediately.