Today, on #TBT, we’ll take a look at one of the most popular vintage chronographs: the Seiko Bullhead 6138-0040. While it’s a watch I struggle to wear on a consistent basis – more on that later – it has undeniable charm due to its unorthodoxy. We’ll take a close look at the watch, its odd design, and its great build quality. First, though, let’s talk a little about “Bullheads” in general. 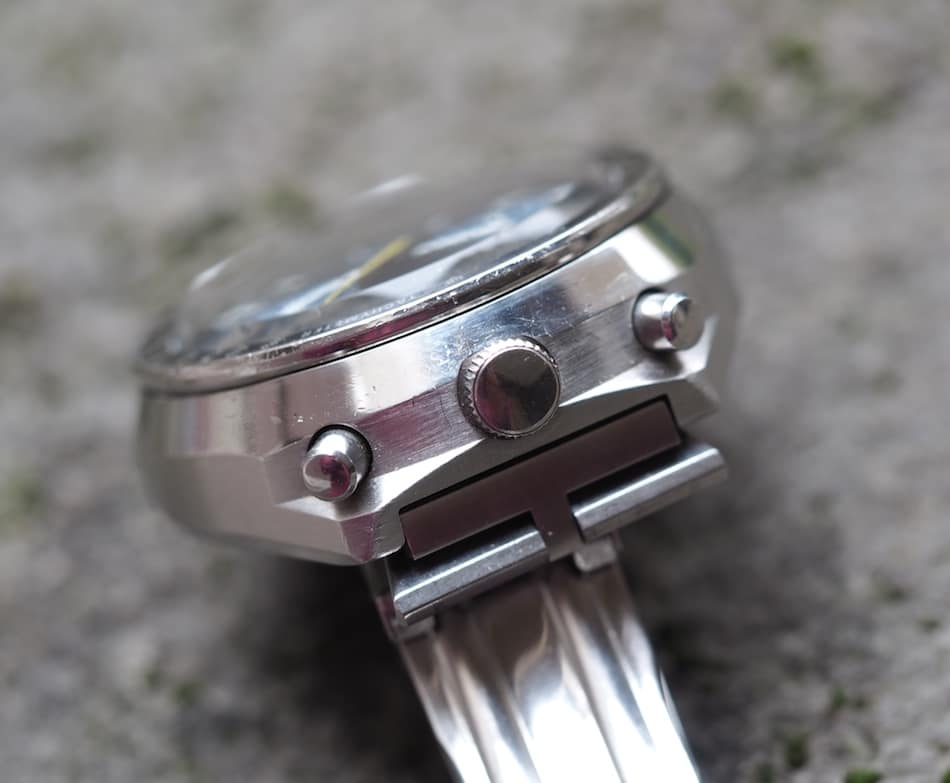 The Seiko Bullhead – One of the Crowd

I’m not breaking any new ground here in explaining that a Bullhead chronograph gets its name from the orientation of its crown and pushers. Notably, the controls sit atop the watch instead of the more customary right side of the watch. Apparently, the rationale for this placement is to avoid accidental engagement of the pushers. Also, a Bullhead seems to ape the typical look of a dash-mounted timer, so it’s likely that these atypical chronographs were created for use in motorsports. In the late 1960’s into the mid-1970’s, things were clearly becoming more progressive and in alignment with a global craze for all things motorsport, it seemed like a perfect time to create a new style of watch. And so, in roughly 1973, the Seiko Bullhead was born – but this time, Seiko wasn’t the first out of the gate. 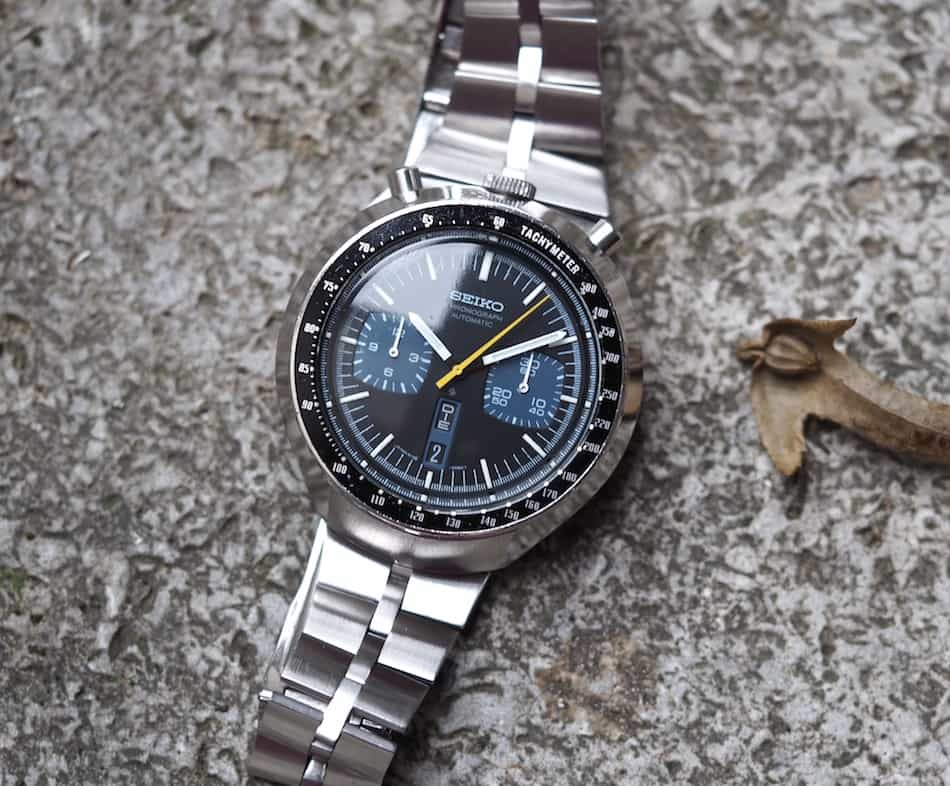 Omega, as shown here in a nice Bullhead overview by Blaise, was first out of the gate in 1969 with its now-famous 146.011. Other brands followed and Seiko’s largest at-home competitor, Citizen, made some of the most notable examples. Bulova jumped in with a wild blue “and grey-cased version and Breitling entered the fray with its enormous “Pupitre”. On the last model, Breitling clearly thought so highly of it that the brand initially released it with a manual wind movement and then evolved the watch in order to fit the legendary Calibre 11 automatic. But enough of the diversion, we’re here to discuss the Seiko Bullhead. 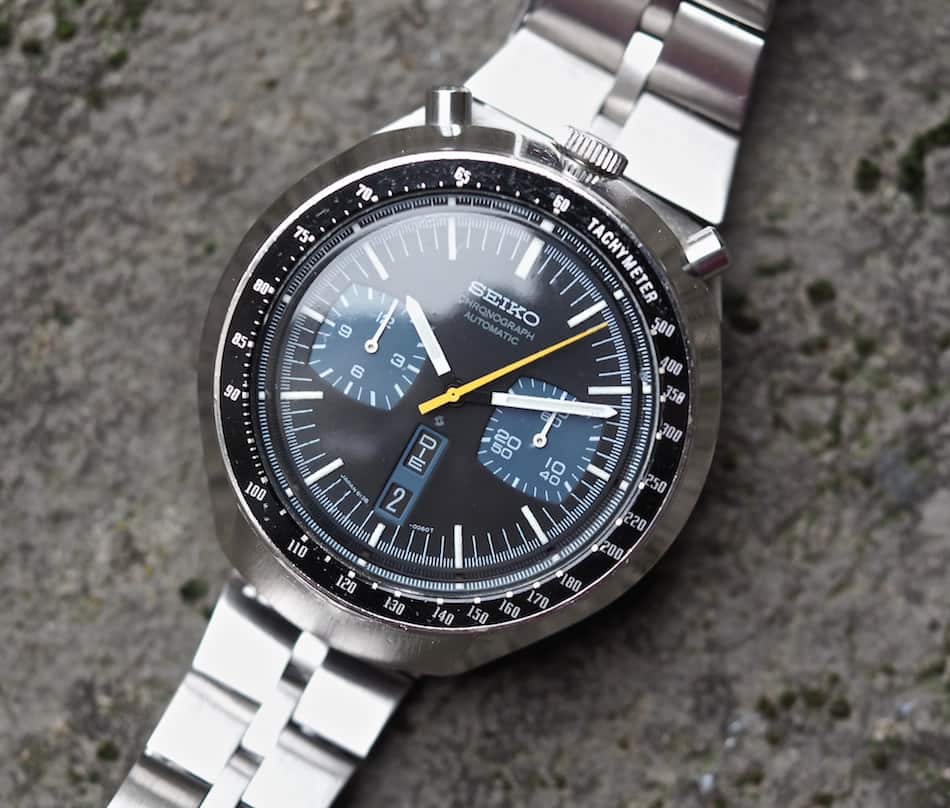 The Seiko Bullhead was produced, principally, in two dial variants. The black/blue version seen here was made alongside a brown/gold edition. Both models were sold until 1979, which also happened to be the last year of production for the automatic chronograph movement, the 6138. Per some really great posts on the SCWF and The Spring Bar, it appears that the black-dialed edition was only made in one style. The brown version, however, received variants including a dial stating “Seiko 5” and “SpeedTimer”. I’ve recently seen some wild black “JDM” editions for sale, but I have a difficult time in confirming their correctness. 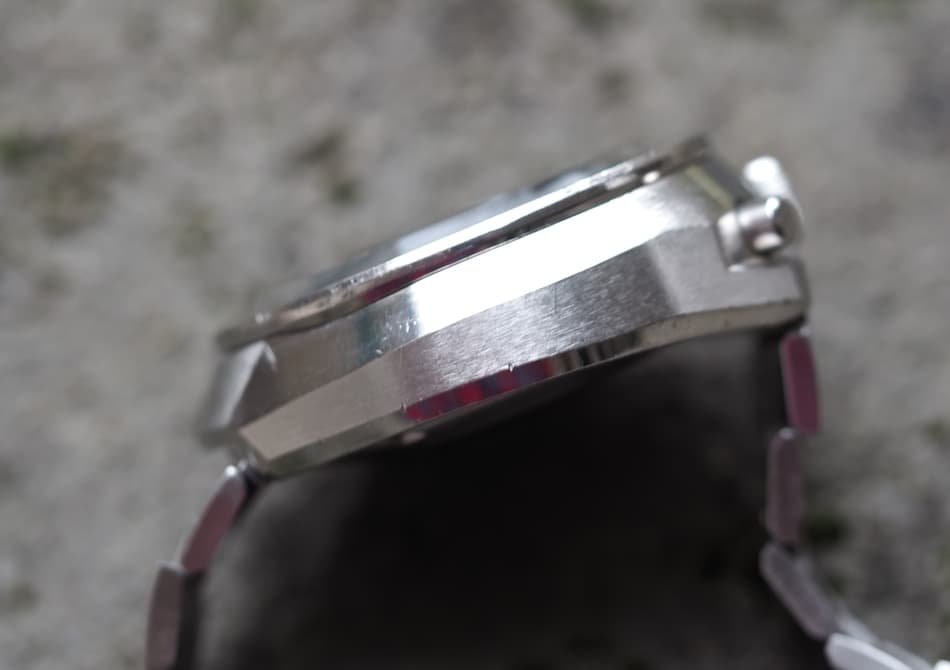 The Seiko Bullhead is Odd

One look at the case of the Seiko Bullhead from the side tells you that this is no normal chronograph. Towards the top, the case thickness is drastically different than the skinnier bottom. The same can be said about the lug width because the bottom width is far narrower than the top. To put it bluntly, this watch is an exercise in uncomfortable asymmetry. 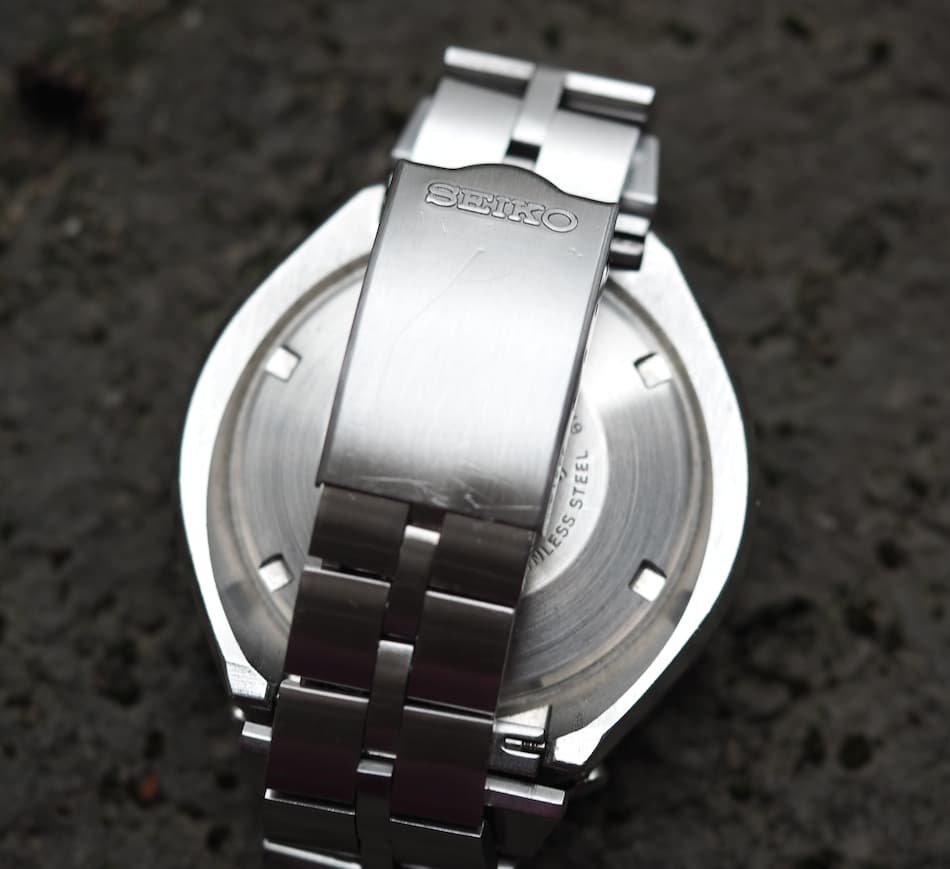 Making things even more precarious on the Seiko Bullhead is a beautifully crafted, but amazingly unstable bracelet that’s been dubbed as “the Fishbone” due to its central “spine” of vertical links that sprout a network of horizontal “scales”. I’m impressed by the bracelet’s finish and it’s show of strength that can only be summed up as more than meets the eye. It’s thin, wobbly, and has a lot of lateral flexibility, but it does manage to somehow keep the watch head in relative check. For those who simply want something sturdier, Seiko did offer a traditional oyster bracelet on JDM models – I’ve seen the bracelets come up for sale now and again – but where’s the fun in that? 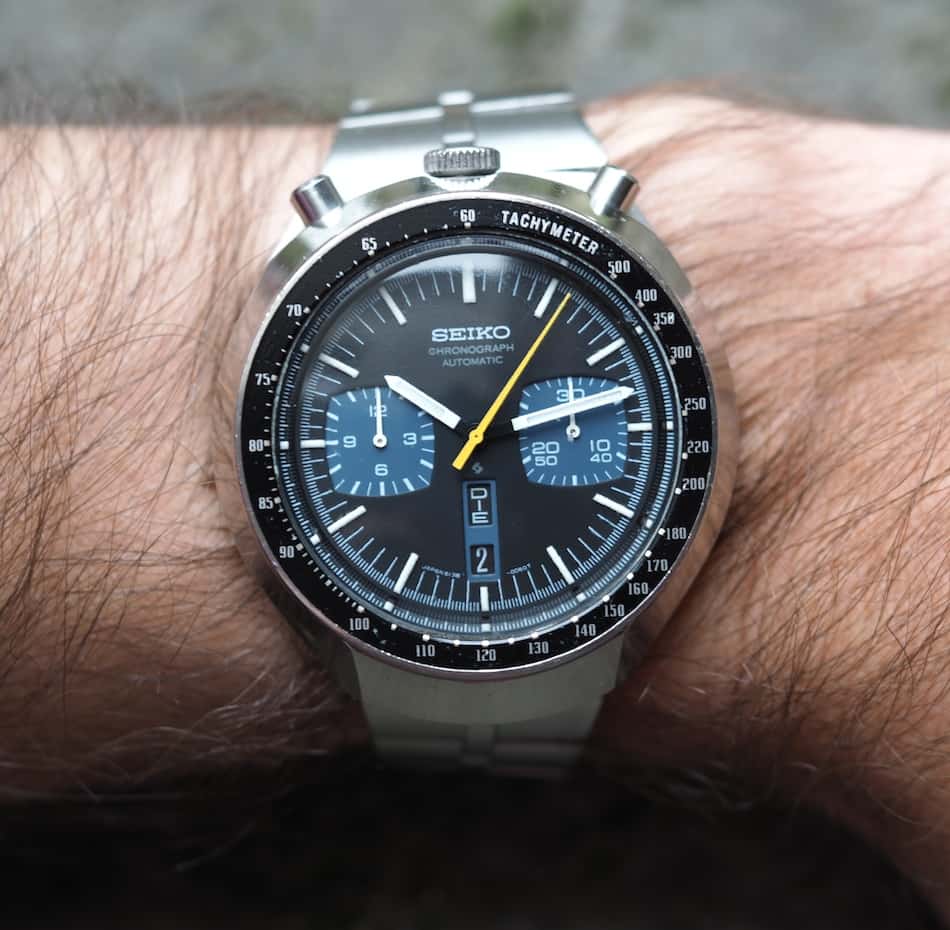 The Seiko Bullhead is No Dress Watch

When I began collecting Seiko’s about 4-5 years ago, I put the Seiko Bullhead on my list, but I was a bit cautious about buying one due to concerns over the potential fit. So, it was fortunate that I attended a local watch fair here in Germany and came upon the model you see on these pages. Trying it on immediately erased all concerns because, despite a case diameter of 44x45mm, this big bovine wears pretty nicely. Yes, it’s heavy, a little unbalanced and takes some getting used to, but there is a certain allure to it. What the Bullhead doesn’t like to do, though, is to get along with the cuffs of a dress shirt. That’s ok, though, because this chronograph doesn’t have any formal aspirations, but keep it in mind, for some crazy reason, you decide to bring it as your only watch on a business trip. 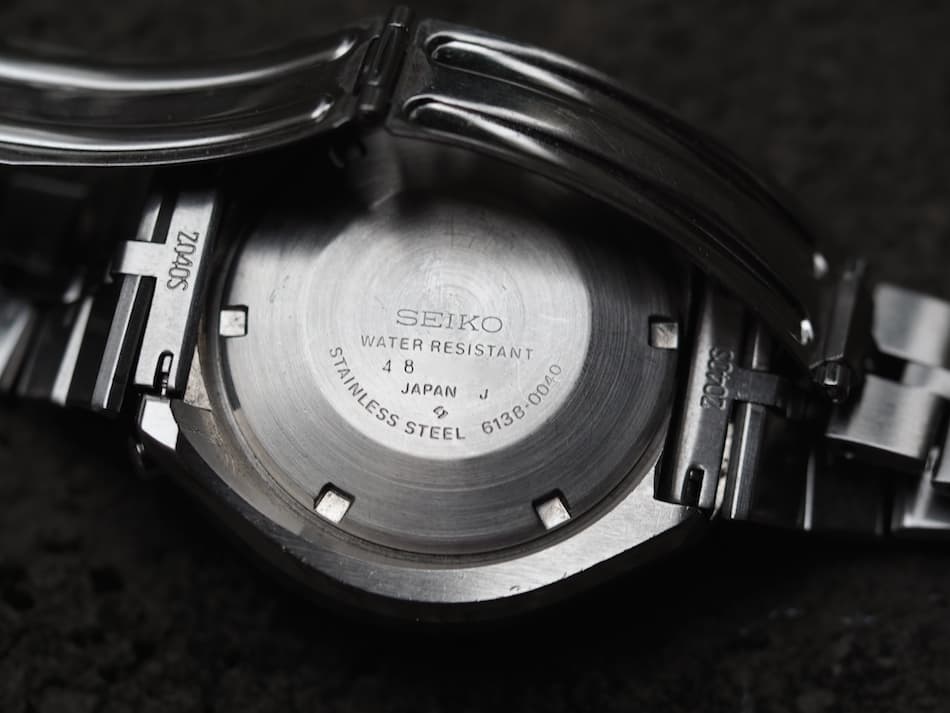 Aside from the size of the Seiko Bullhead keeping it off your list as a “sole wearer”, you wouldn’t be faulted for putting this watch into heavy rotation on account of its movement. The 6138, which we detailed in an early article, is an absolute gem. Column-wheel and vertical clutch equipped, it makes up for its lack of decoration with serious robustness and fantastic timekeeping. This was Seiko’s second automatic chronograph movement, after 1969’s 6139, and it added a second register to count hours (up to 12). Unlike the 6139, the 6138 can actually be hand wound (yay!!!) and the crown adjusts the day and date by turning it in either direction after pulling out one stop. As much as I appreciate and respect the earlier 6139, the 6138 just feels like a “big boy” movement. 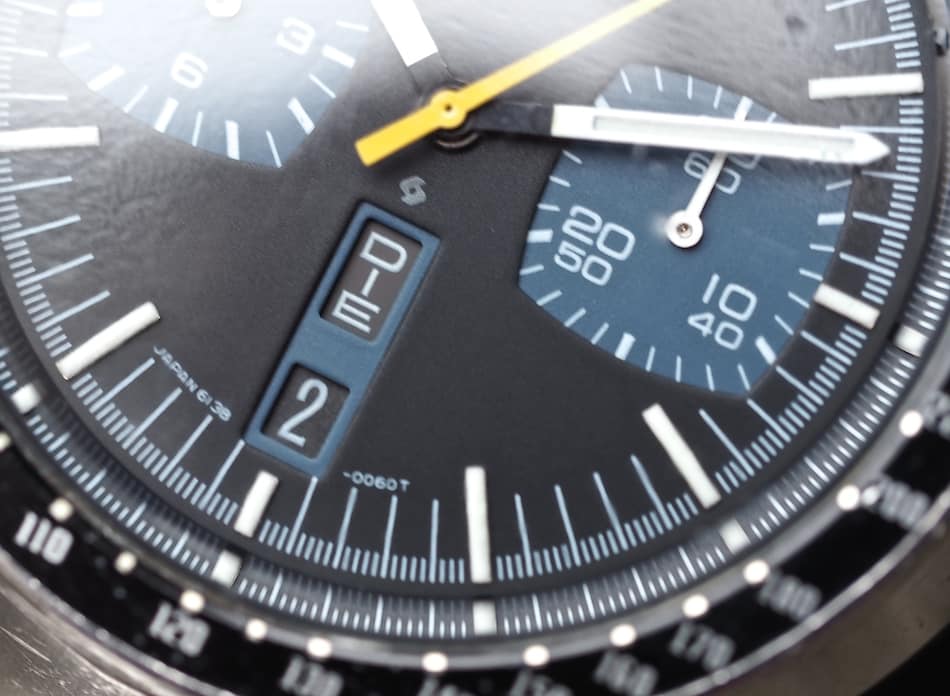 A close look at the Seiko Bullhead dial shows the typical attention to detail by the Japanese brand. The sub registers and date window are inset while the hour markers appear to be applied. The main hour and minutes hands are black at the center to appear as “floating” on the black dial while the rest of the hands are lumed and painted bright white. Adding to the contrast is a loud yellow sweep hand that adds just enough impact to what is actually a pretty serious and timeless dial design – both in color and font. A quick glance below center reveals Seiko’s “Suwa” symbol, so we know we’re dealing with something vintage. 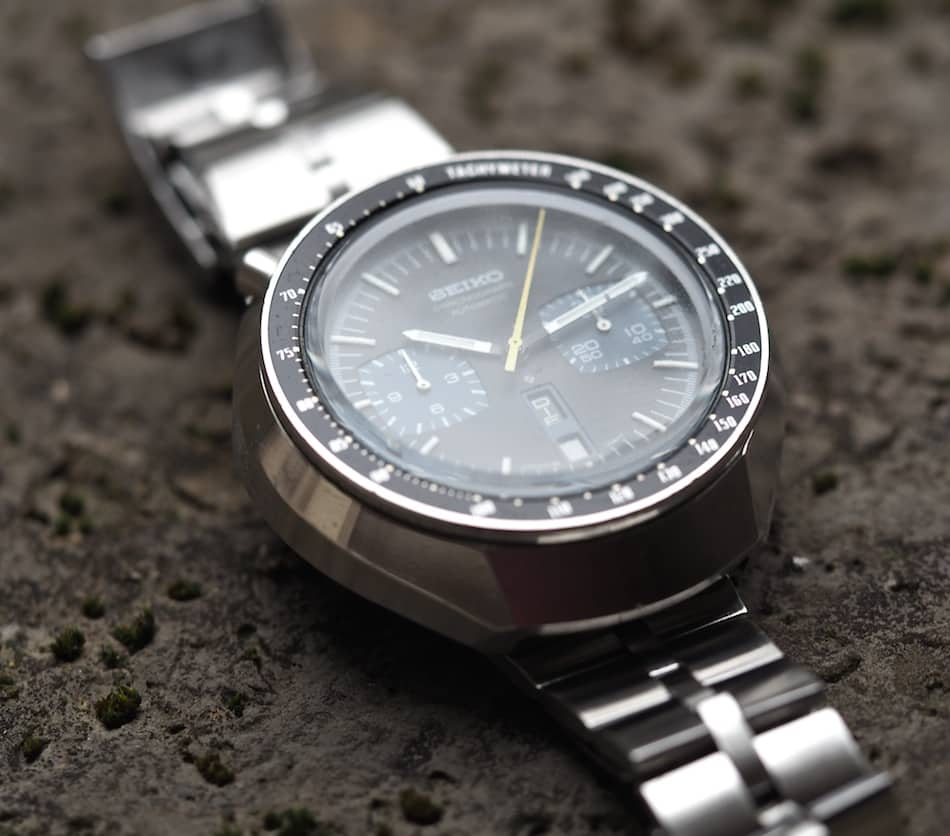 Problems with the Seiko Bullhead are well documented on many sites. Like so many early Seiko’s, rafts of aftermarket parts are available and often employed on the old beasts. Blame usage, moisture or neglect for the large number of “frankens”. Also, because of the tall, nugget-like case, these watches almost always show some serious signs of collision. 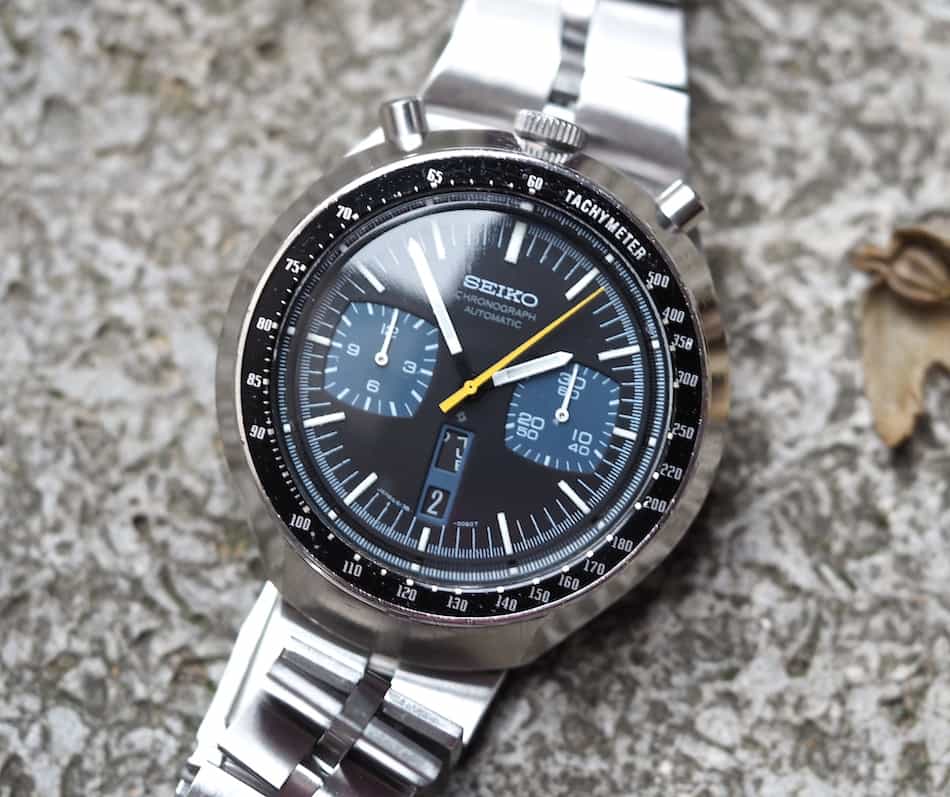 The tachymeter bezels are normally dented and the cases typically exhibit serious scratches. The cases, at least, can be refinished and brought back to showing their lovely alternating brushed and polished surfaces. Crystals are made of Seiko’s Hardlex mineral glass and, as seen on mine; someone managed to polish it and, therefore, created a slightly wavy surface upon close inspection. No worries, though, as replacements are now easily found online. 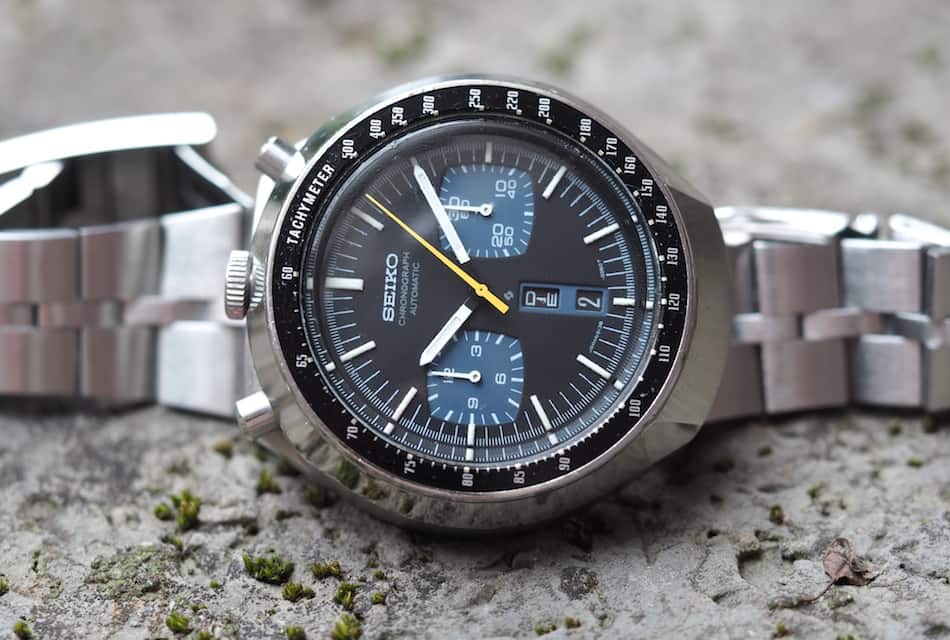 The market for the Seiko Bullhead is a popular one. The watches certainly aren’t rare, but finding a good one at a reasonable price has become challenging. Plus, there are collectors who are firmly in the camp of brown versus black or want a JDM variant. When I found this model, it cost something on the order of $275, which now seems like a relative bargain. It has an English and German date wheel and the condition is great overall. The pushers are a little sticky, but the movement runs perfectly. I’d say that decent watches can still be found for under $500 and anything above that seems to sit unsold unless it somehow has all its paperwork, etc. 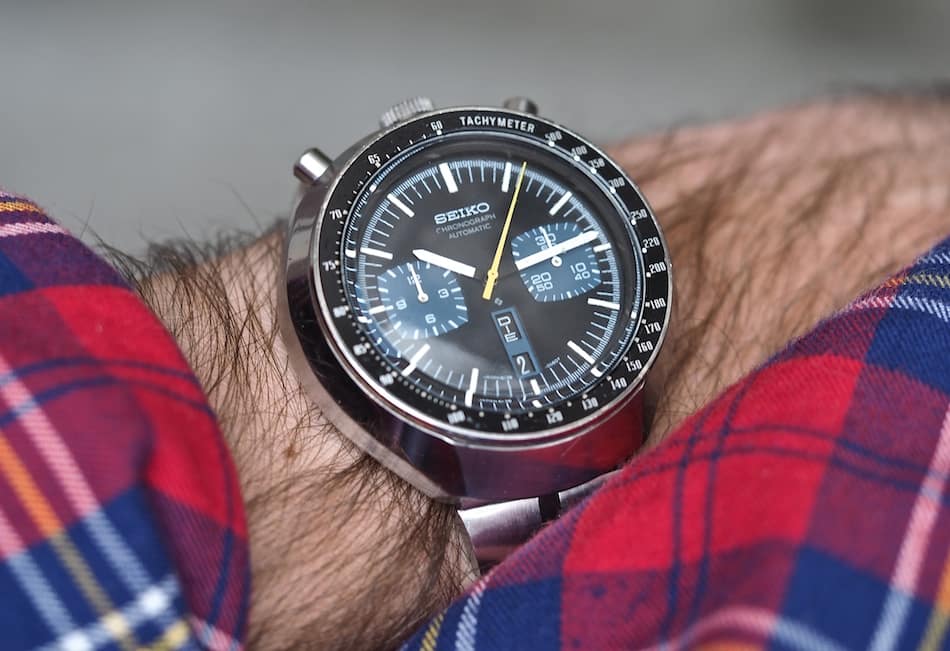 The Seiko Bullhead easily ranks as one of the firm’s most popular vintage watches and it’s also one of the rare models that can often by found in a Swiss chronograph collector’s portfolio. Maybe this is because it’s too fun to deny or because it’s an affordable gateway drug to trial before going headlong into the far more expensive realm of models such as the Omega. Either way, it’s a strangely satisfying and relevant watch to own and wear. I’d highly recommend finding one.

Hot Topics
Introducing: The Omega Speedmaster Super Racing With Spirate System
165 comments
Design Vs. Specs — Which Is More Important To You When Buying A Watch?
86 comments
New Release: The Limited-Edition Seiko Prospex SLA067J1 Diver
56 comments
My Predictions For New Omega Speedmasters In 2023
55 comments
The Time To Buy Is Now: How The Current Economic Climate Influences Watch Buying And How You Should React
51 comments
Popular
10 Tips For Better Watch Photography
Bert Buijsrogge
12
New Hamilton Intra-Matic Auto Chrono – An Introduction (with live pictures)
Balazs Ferenczi
13
Hands-On With the Seiko Prospex SRPC91K1 – Save The Ocean
Robert-Jan Broer
15