You don’t need to be a hardcore Ghostbusters fan to consider the Seiko Voice Note an entertaining acquisition.

If you get the Seiko Voice Note and match it with a Ghostbusters costume equipped with a proton pack, you might accrue some fame at this year’s Comic-Con. Why? The devil is in the detail. Three out of four Ghostbusters heroes were seen with this wacky Seiko on their wrists, which indisputably makes it an important add-on to the amazing Ghostbusters gadget set. 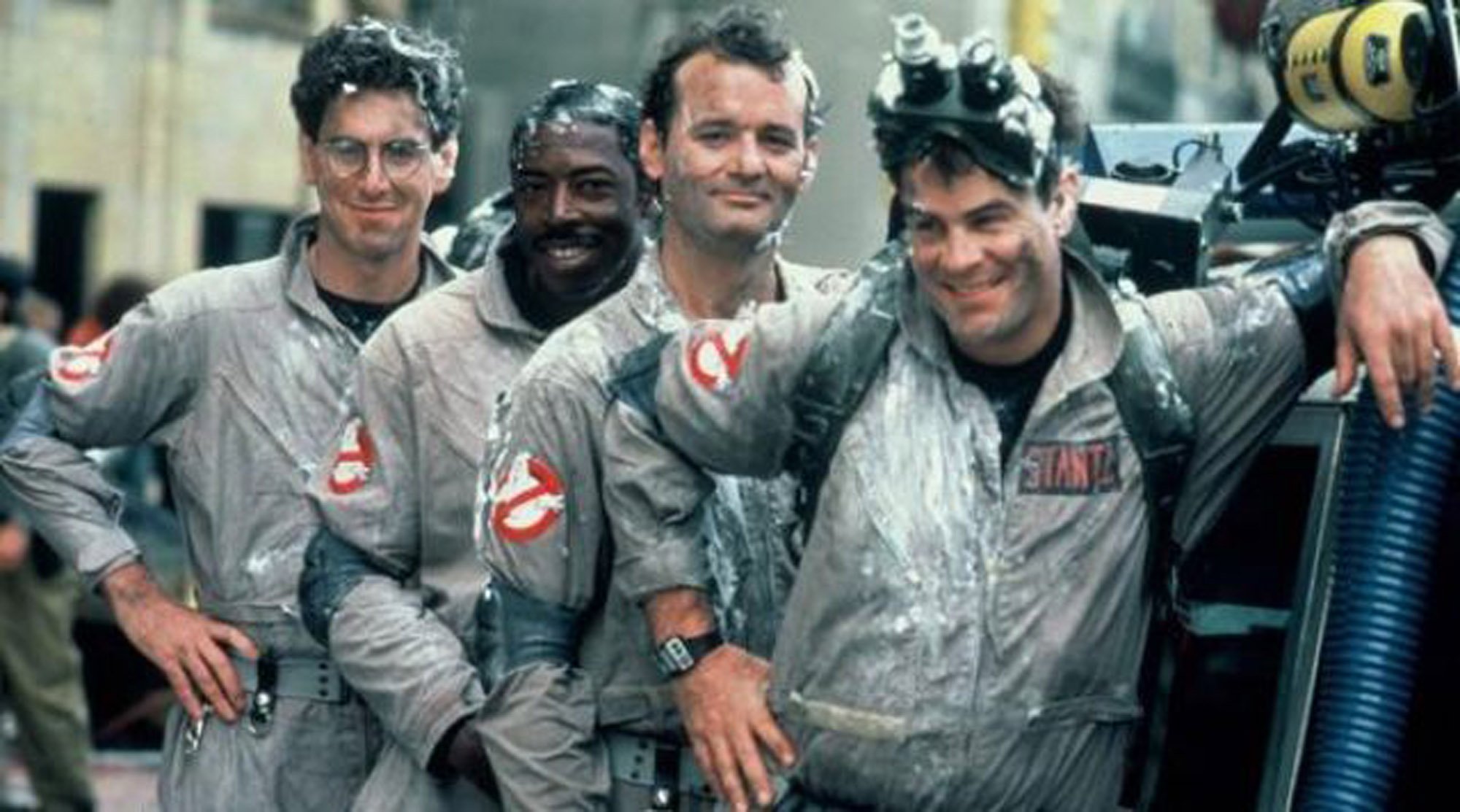 I don’t own any other Ghostbusters memorabilia, but much like the rest of the world, I found myself in love with the movie’s theme song. It reached number one on the Billboard Hot 100 chart back in 1984 and reigned there for 3 weeks straight. I was also always amazed by their car. Inevitably, I watched the movie as well. Watching the young & classy Bill Murray and Dan Aykroyd busting ghosts is a timeless experience. With or without a Seiko watch. 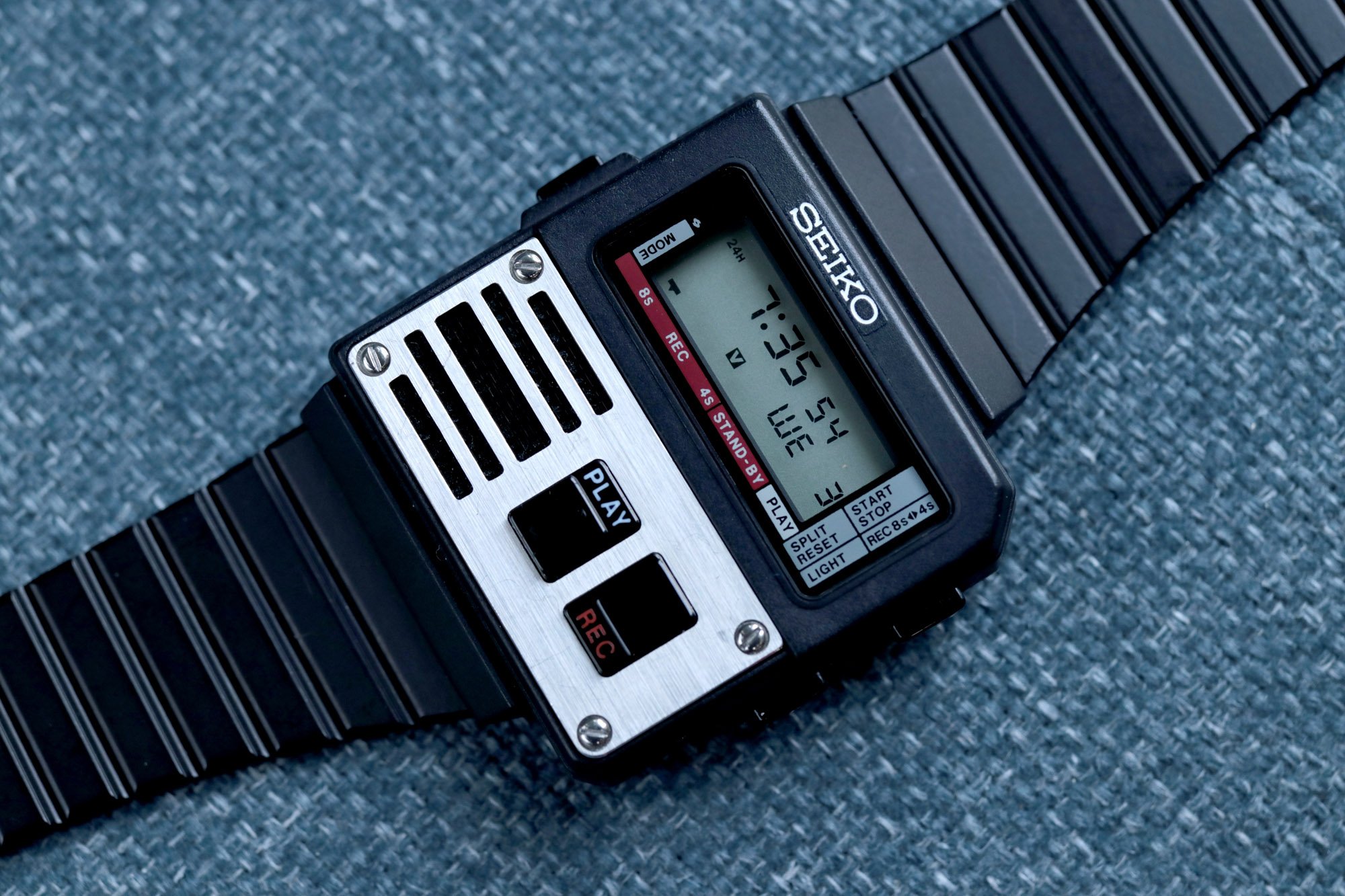 If you’ve read some of my articles you already know that I am easily attracted by any quirky movement or watch feature. I spent some time thinking about whether featuring a quartz watch in the #TBT is a good idea. But I have faith in you and hope you don’t stone me to watch death because I genuinely believe this watch deserves the place to be here. 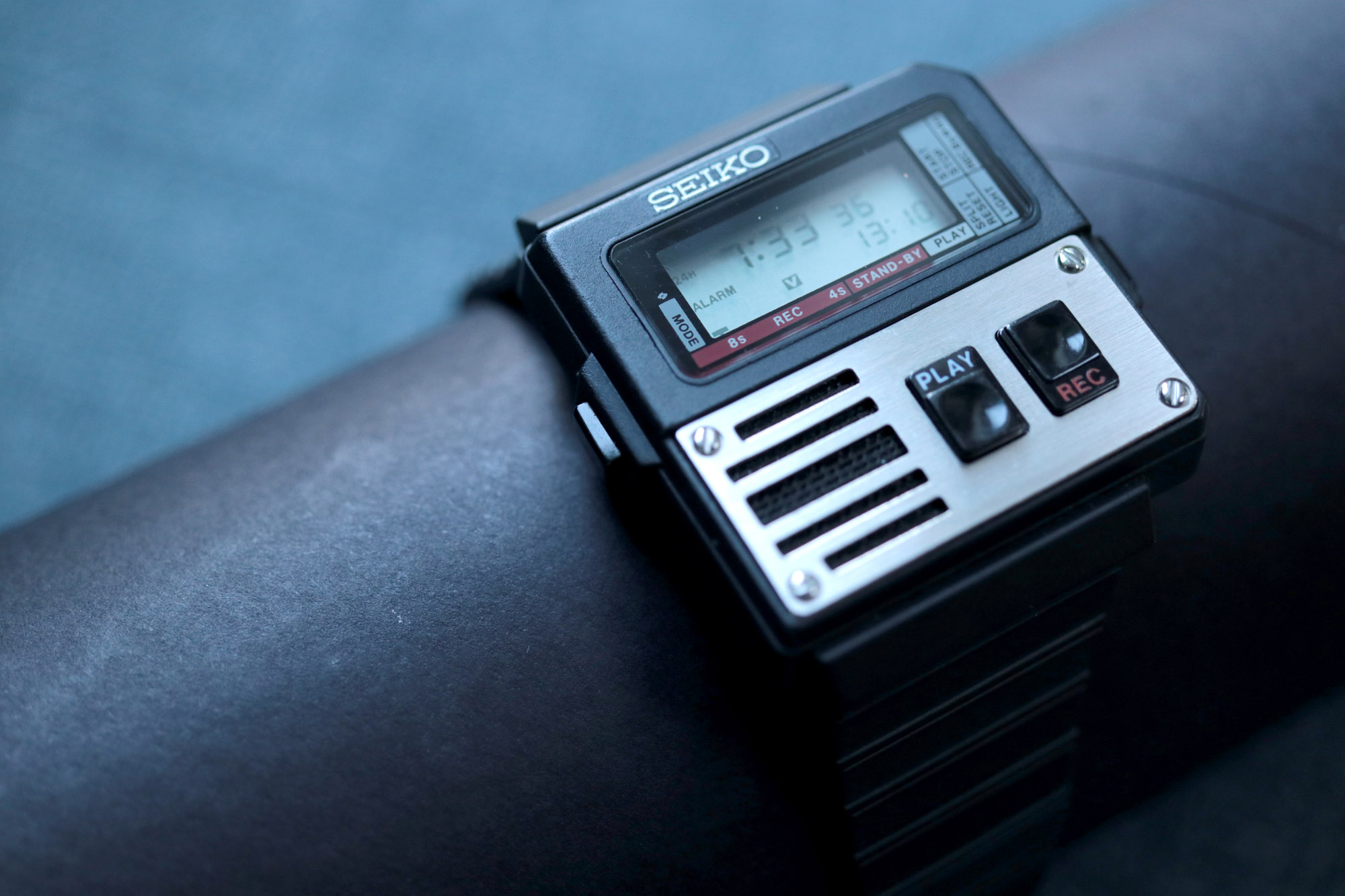 If you are still with me, I am sure you’ll uncover the charm of this watch. To start counting off some of its considerable features, take the commercial nickname Voice Note. A no-brainer, it suggests a voice recording feature. Nothing revolutionary if looking at my iPhone sitting next to my keyboard. But when you realize you could find this feature built in a watch that was listed in 1983 catalogues, it’s quite remarkable. I think it is the first commercial watch ever to feature this kind of functionality. 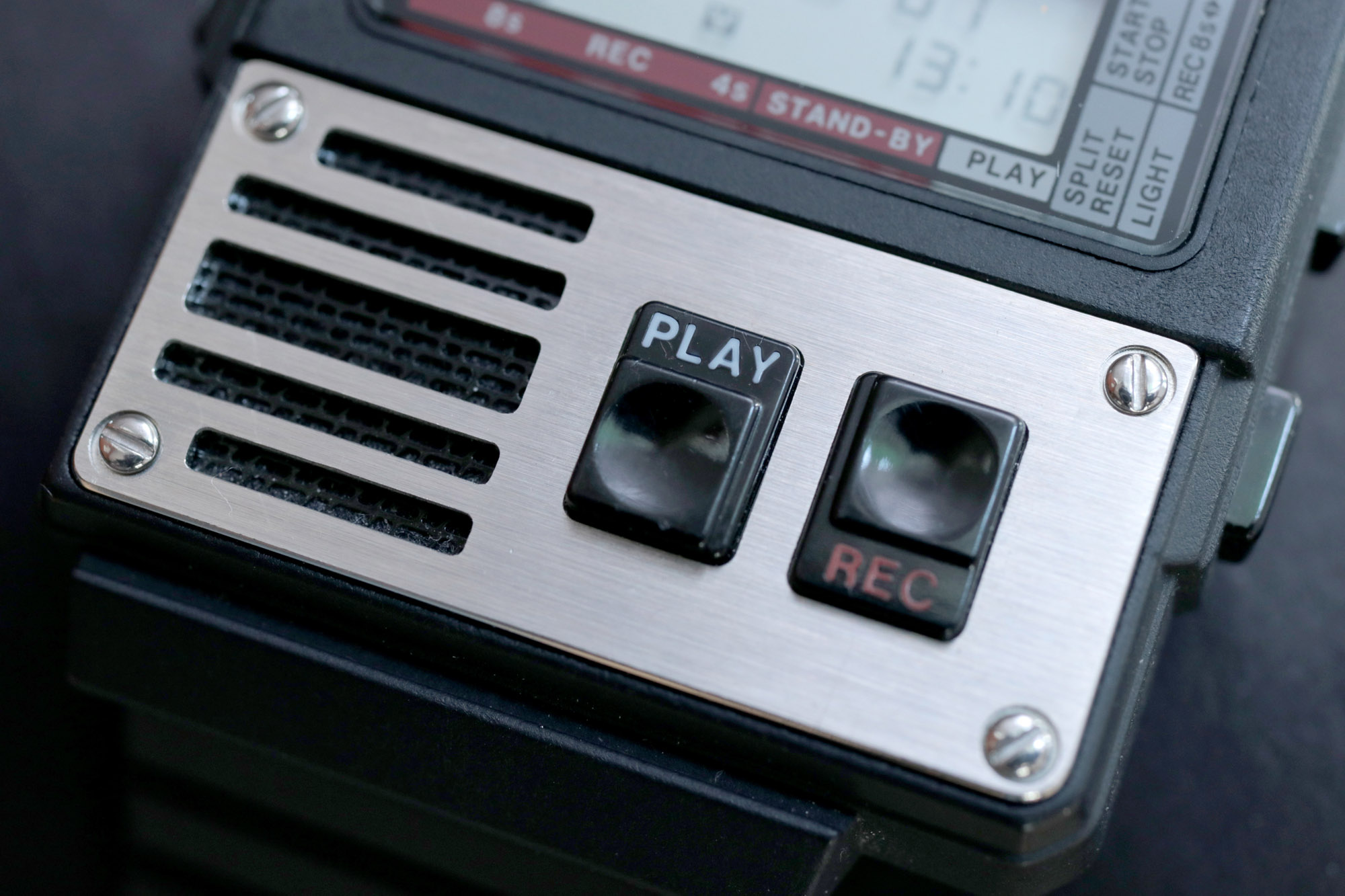 Just reading the signs in the red bar under the dial indicates that the watch is capable of recording messages either eight or four seconds long, simply by speaking directly into the built-in microphone. All possible thanks to the internal 16KB solid state RAM memory storing verbal messages. You can fit both messages without being afraid that the short one will erase the longer one or vice versa. 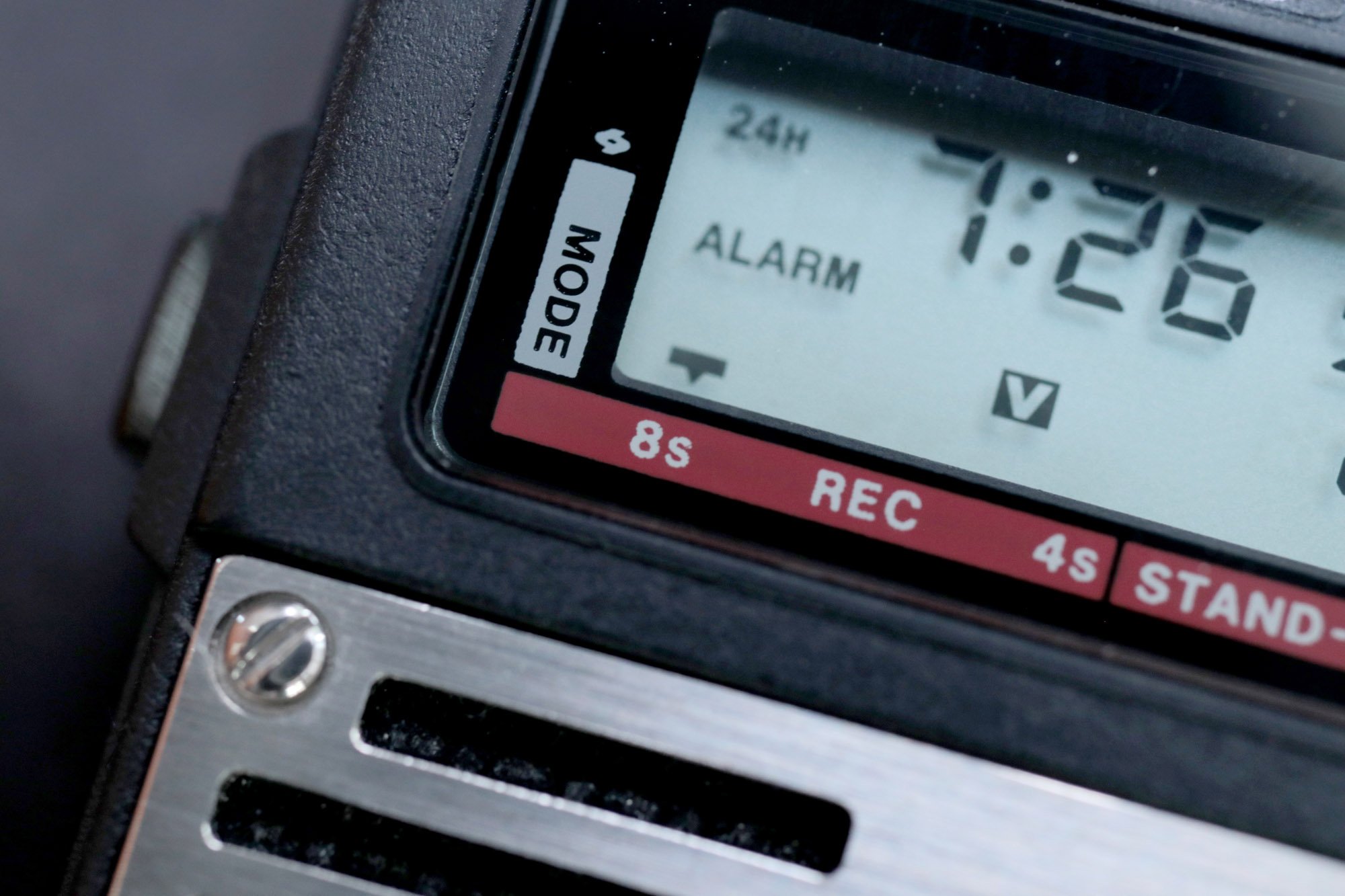 Ghost hunting, parapsychology and the so-called EVP (electronic voice phenomena – sounds found on electronic recordings that were interpreted as spirit voices) were all big topics in the 1980s. Probable use of the watch on the wrists of Bill Murray or Dan Aykroyd in the movie was exactly to pick up possible EVPs. Regarding the recording quality, I will just say the following: I recorded two messages and played them back to my wife the evening I got the watch. She was able to understand like half of it. In other words, don’t expect miracles. But I bet you can expect some amusement. 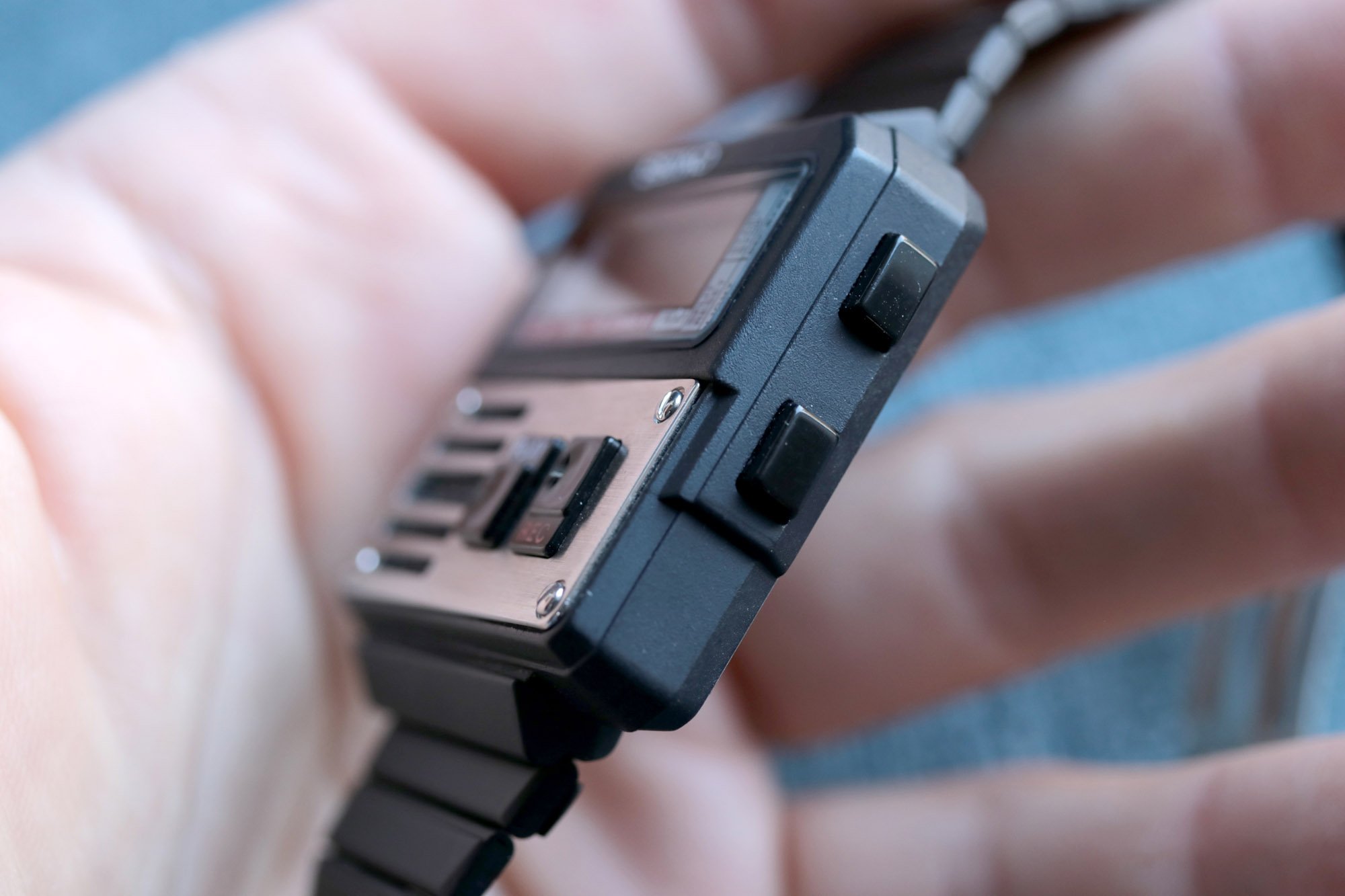 When I first spotted the Seiko M516-4009, I thought I was looking at some black plastic generic watch body. I should thank the thin and brushed metal plate covering the mic and speaker for making me stop to dig deeper. I browsed for more pictures and only then found out that the watch case and bracelet are constructed from a combination of stainless steel and carbon fibre plastic. That would answer my thought regarding today’s limited availability. This Seiko and its materials were quite the pioneers back in the 1980s and you know – today Tesla isn’t the cheapest toy either. 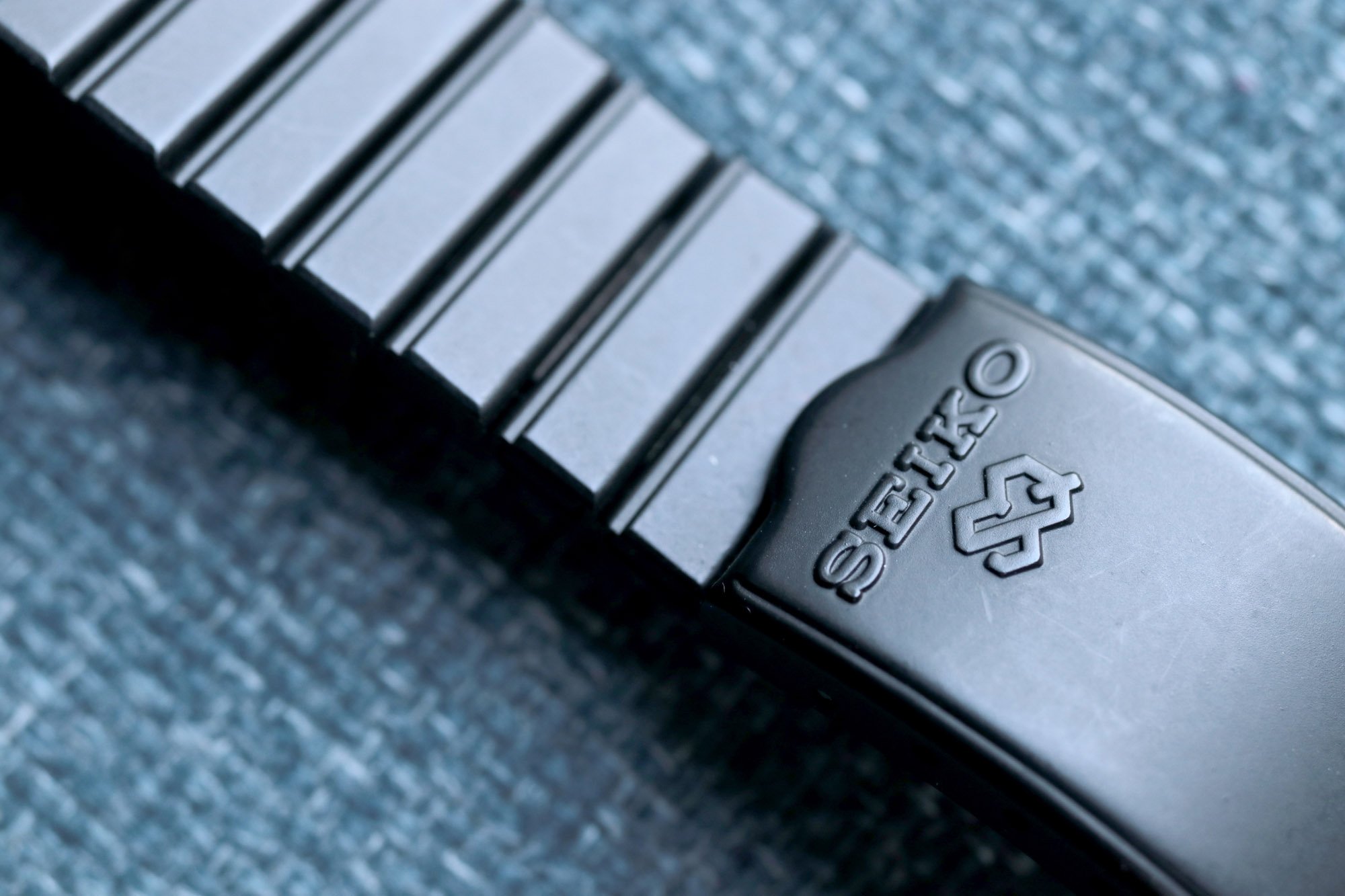 When I decided to get this Seiko Voice Memo, it was purely because of the voice recording feature. I wasn’t sure how I would feel about the design. It was way too elusive for me. When I first held it in my hand, I was surprised to find how light the watch was. Light, but not too light. Remember the carbon fibre? Besides the material, the production quality is also very high. If you copy the curves of the case with your eyes or fingers, you will notice very thoughtful lines breaking the otherwise dull shape. 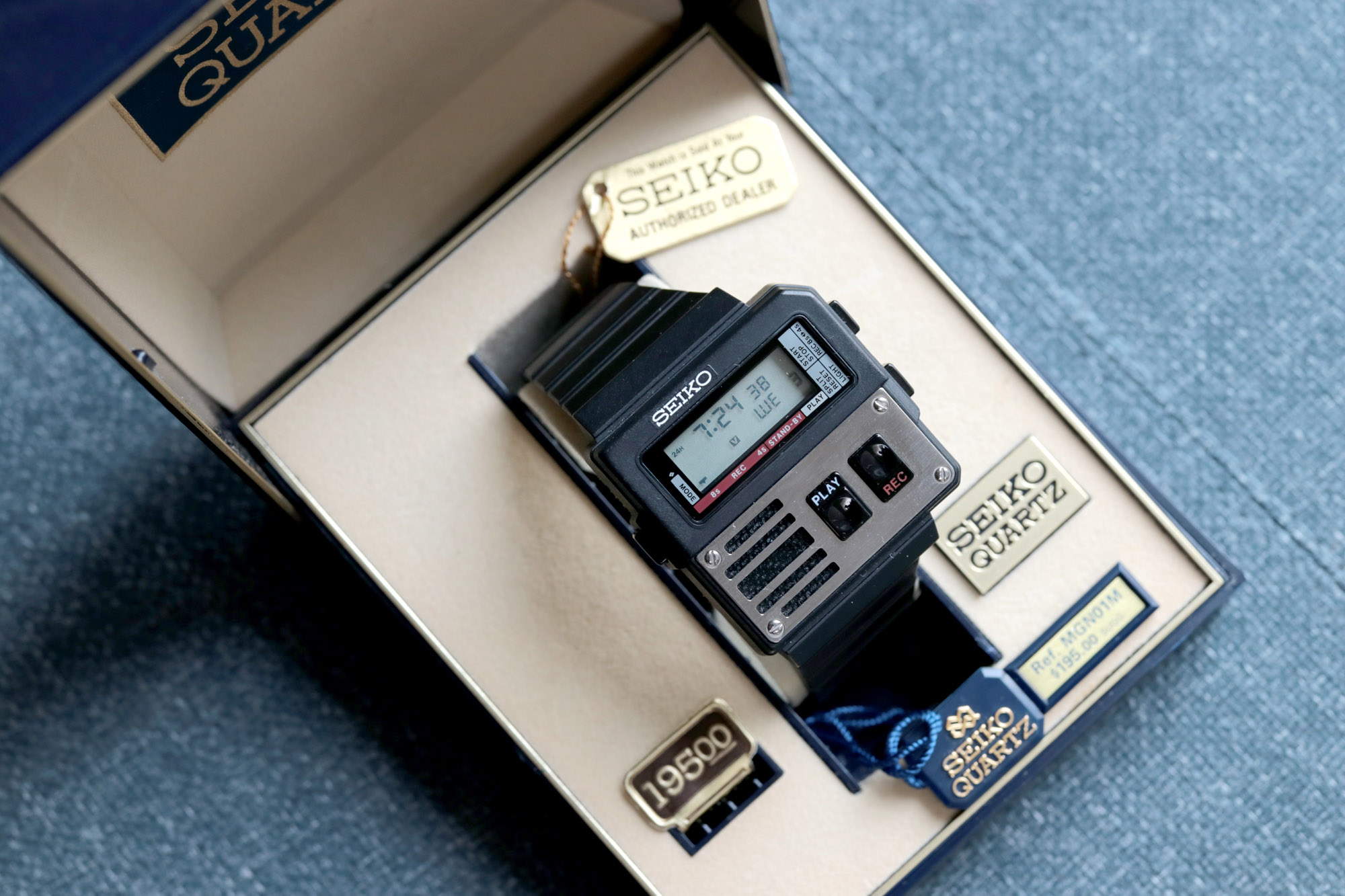 I didn’t have to persuade myself to like the watch – it grew on me. And I grew fonder of it each time I put it on. Before I got it, I thought I would never wear it to the office. Because it would be – I don’t know – too visible? Too disturbing? Too crazy? Not at all. All the details I thought would make the watch unwearable actually made it very well balanced. The spacious thin metal plate literally cuts the watch in half and contrast with the very small, but nicely-shaped digits. The metal plate with a pair of big buttons for recording and playing the memos is screwed down with four screws. While the back case is fixed with Phillips head screws, the front is attached by bigger, slightly sunk slotted head screws. I consider it a nice and gentle detail. 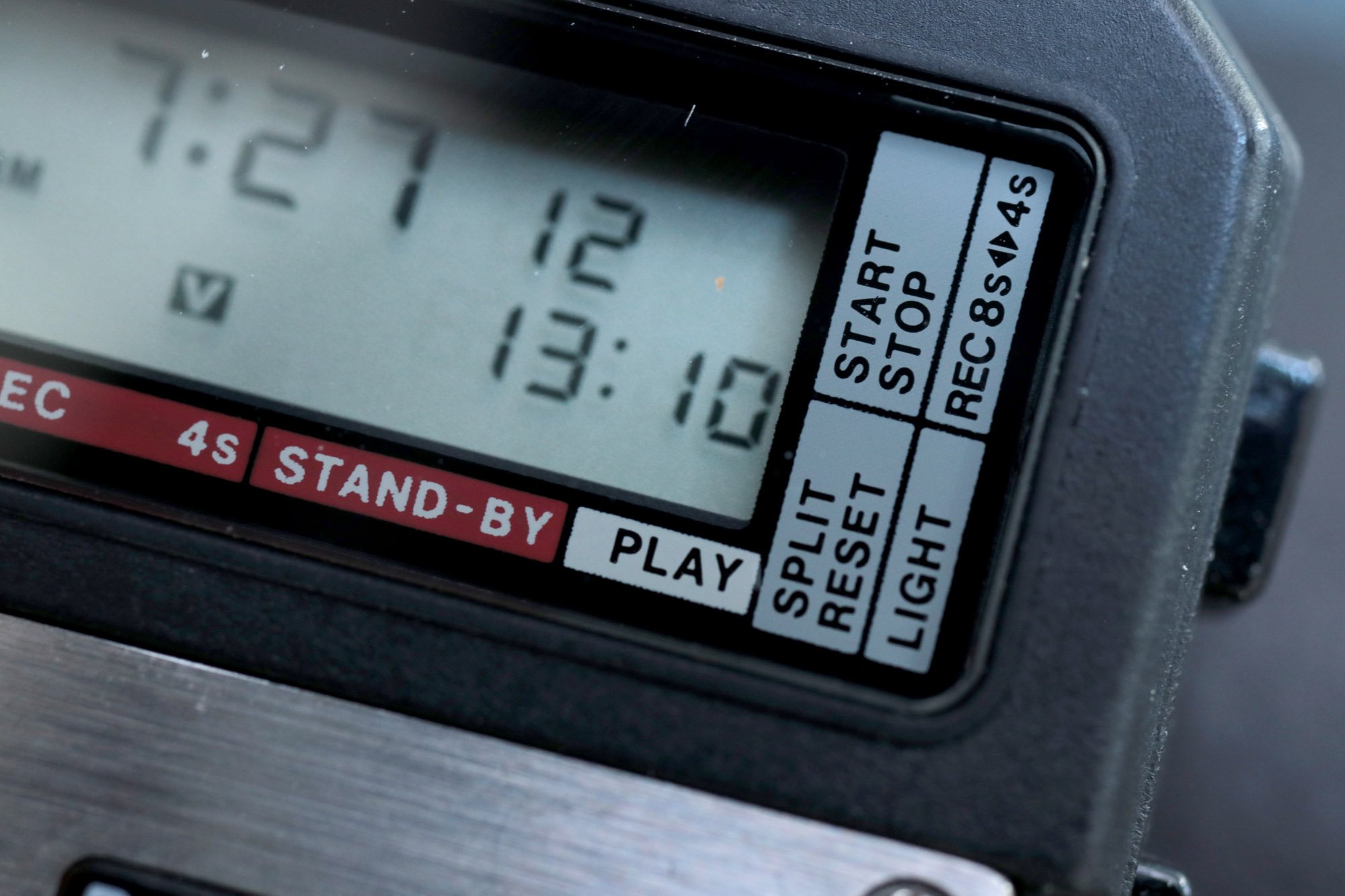 I don’t want to call it a dress watch. But you have to admit the designers put a lot of effort into putting all the pioneering features, signal titling, symbols and words together. If I was to choose one descriptor, I would call the design very muted and classy, when taking into account the ostentatious idea behind the watch. 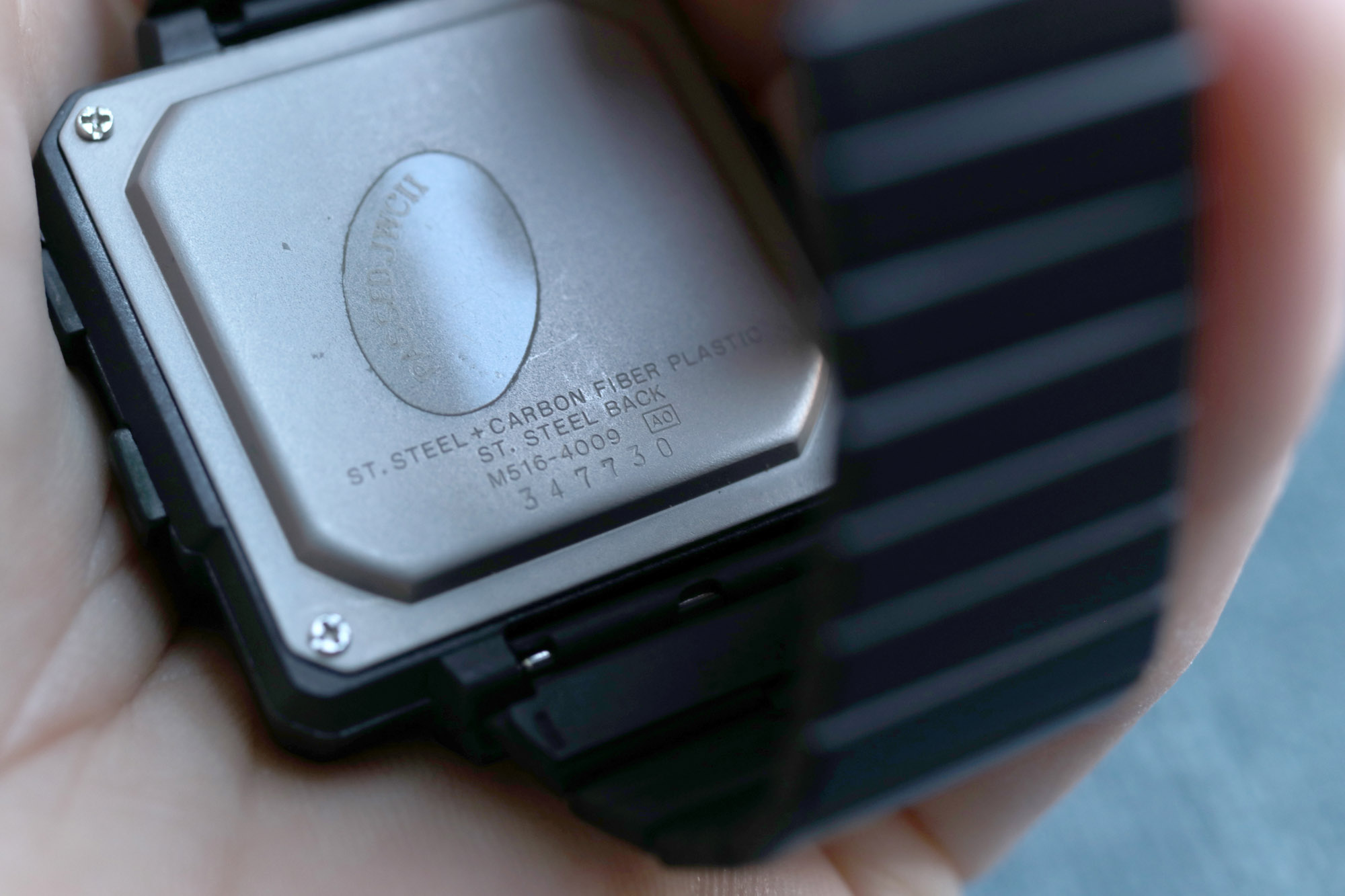 Some of the Seiko Voice Notes I found online are quite beaten. I am usually not uptight about my watches and I wear them anytime and anywhere I want. I keep in mind that they are vintage watches, but I don’t want to be restrained by the fact. I’m not overprotective, I enjoy watches and don’t count the scratches. But living with this Seiko, I have to point out that the speaker area loves to collect dust. Also, I’m not sure how fragile voice electronics are or how their function changes over time. 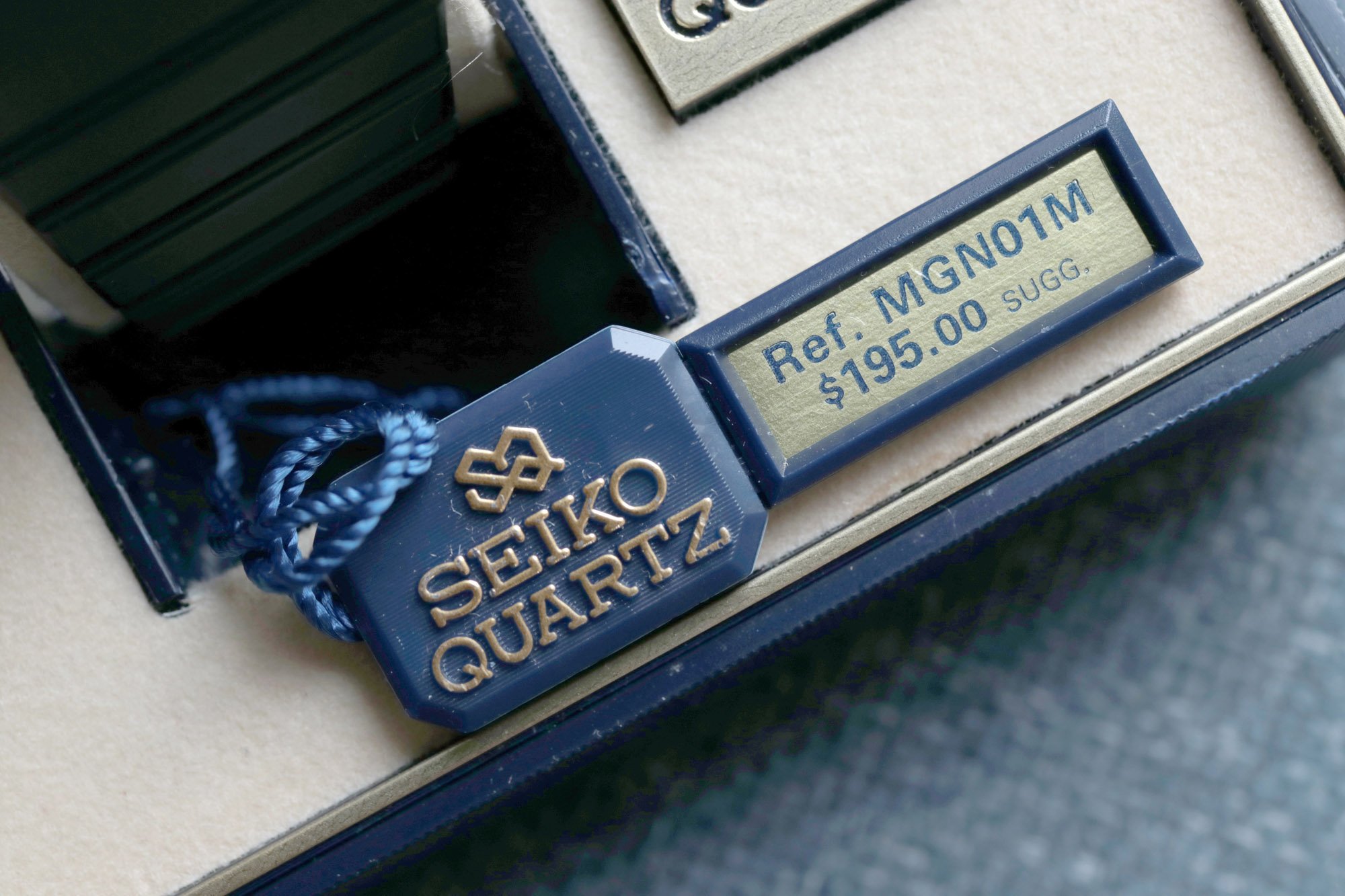 My confession: it is the first watch I have ever worn on a bracelet. You know, I am a leather strap kind of guy. I never wore my Breitling or other Seiko on their original bracelets. I’ve never even worn my Speedmaster on a bracelet. I always put all the bracelets down and changed them for a strap. But here, I couldn’t imagine putting this NOS Seiko M516-4409 on anything else than its original asymmetrical bracelet with a nicely branded clasp. So, without much thinking, I took it out from an untouched SEIKO box, freed it from all the tags and just put it on my wrist. Final judgment call: comfortable, flexible and a perfect fit to the watch case with its non-traditional style. 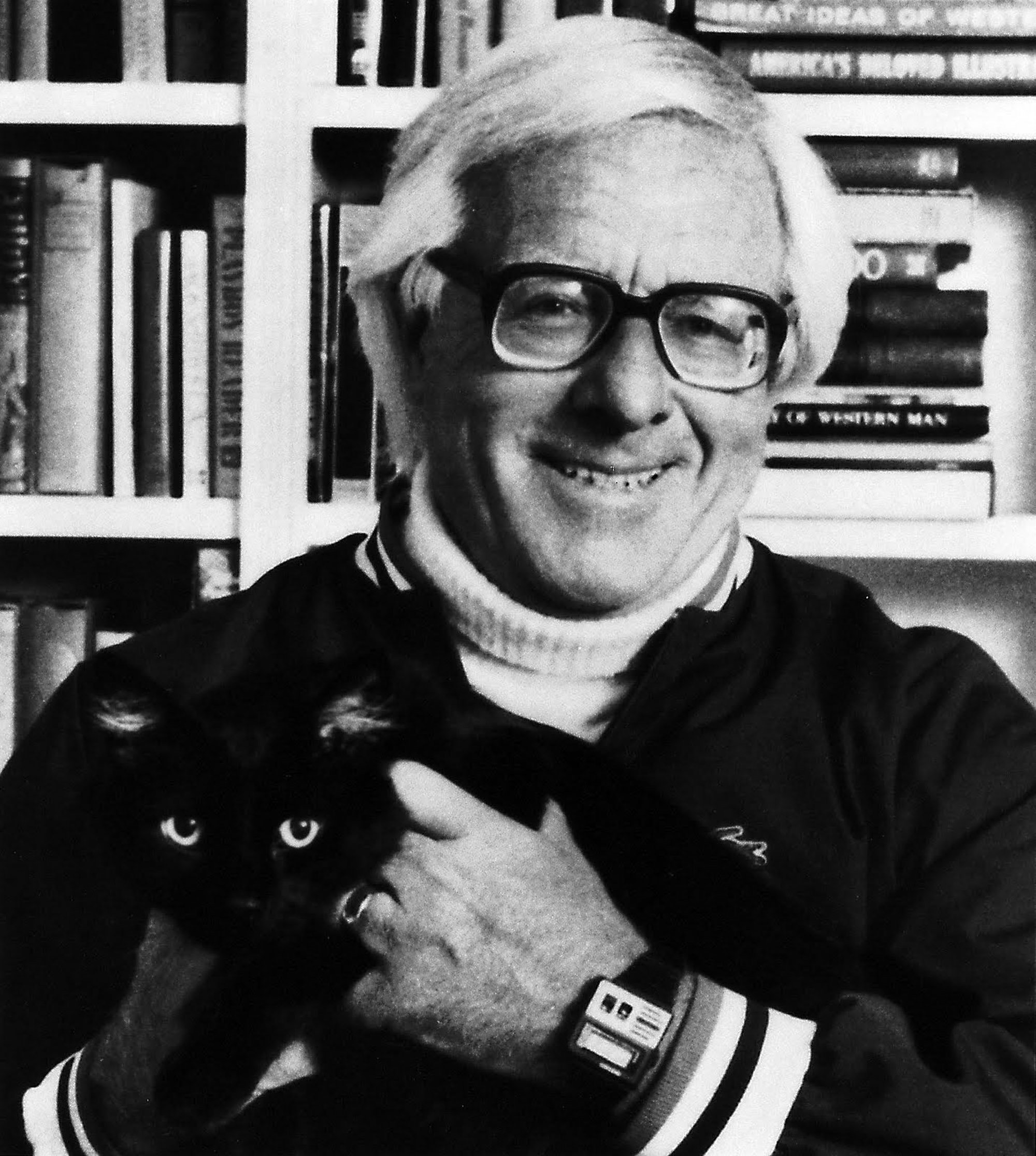 Final Note on the Seiko M516

It is more than obvious why this model didn‘t score a super huge production series. As with any pioneering technology, the price was a bit high for its day. Sales volumes were not miraculous, but the Ghostbusters cameo definitely helped. During my research, I was happy to learn that even Ray Douglas Bradbury, an American author famous for the Fahrenheit 451 novel wore the Seiko M516-4009 too. Excited enough? Happy busting!