Shut Up And Read The Truth About Cartier — Part Two

It was only a few months ago that Robert-Jan asked me to come up with an update on the article “Shut Up And Read The Truth About Cartier”. And that was actually not such a bad plan. Apart from the fact that it is still my best-read Cartier story, a lot has changed at Cartier since that article was first published on April 29th, 2015, especially in the way La Maison manages its collections.

Let’s wind the clock back a bit. In the ’20s and ’30s, Cartier had already its collection of shaped watches like the Tonneau, Tortue, Santos-Dumont, and others. In the early years, these watches, which were mainly produced in yellow gold or platinum, were usually equipped with an EWC caliber. Later on, many models received a quartz movement. In 1998, Cartier launched Collection Privée, Cartier Paris. This now-famous series contained the brand’s most beautiful and well-known models, all powered by top mechanical calibers from sister brands such as Piaget and Jaeger-LeCoultre, but also Frédéric Piguet and others.

In 2008, Cartier discontinued the CPCP series to make way for the ambitious Fine Watchmaking Collection. This was like a CPCP collection aimed at the male clientele. This time, however, several watches appeared each year, featuring a complicated caliber developed and manufactured by the Cartier team of watchmakers. The Flying Tourbillon was the very first caliber that debuted at the fair in Geneva in 2008. The brand featured it in the Ballon Bleu, Santos 100, Calibre, and Tank Americain cases. 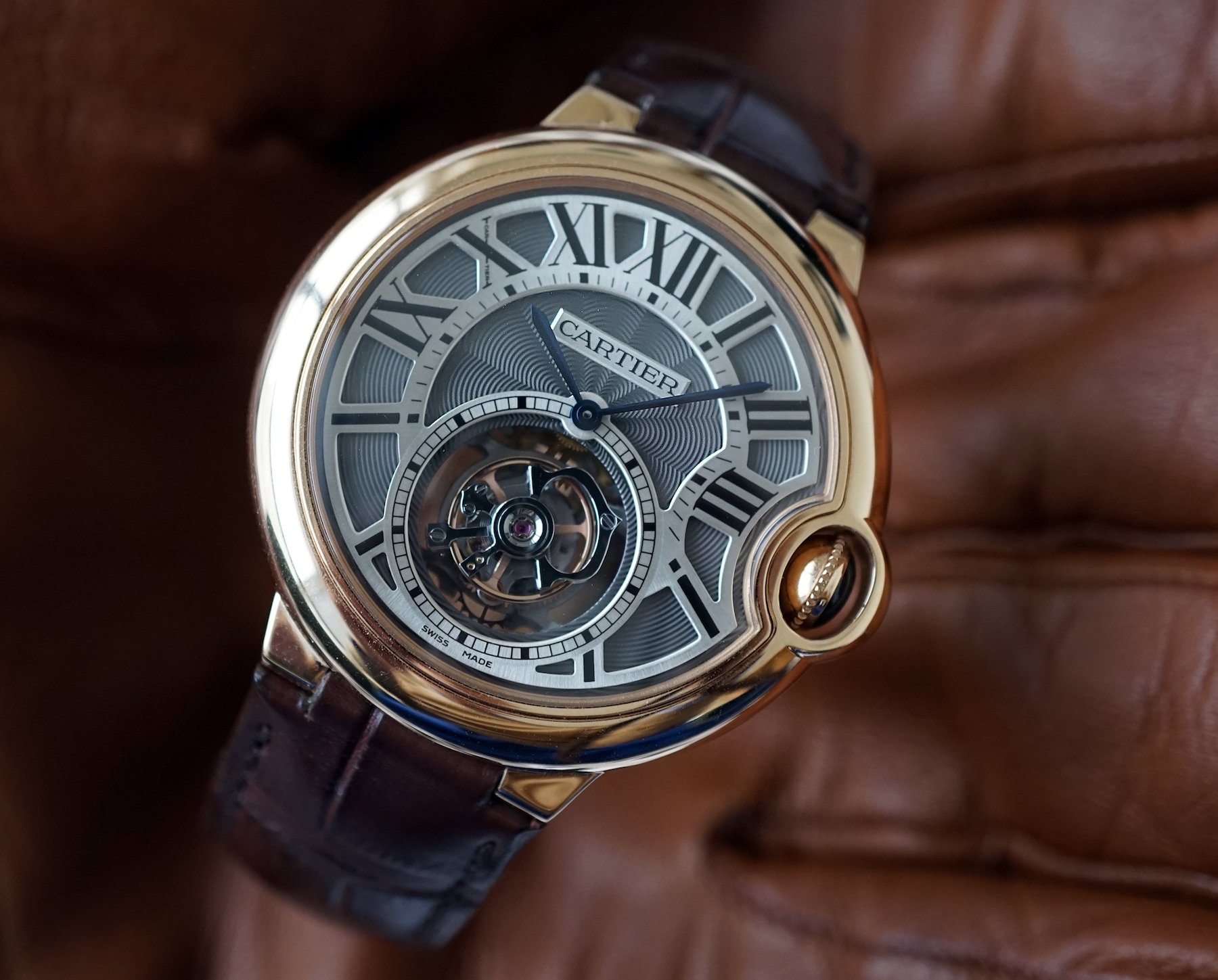 Stepping up to Haute Horlogerie

This was quite an ambitious plan in itself. The cases of these watches were fashionable and larger than necessary, as large watches were very popular at that time. I personally felt that this trend was better suited to mainstream watches, not high-end timepieces with equally high-end price tags. The line was not a great success, despite the large number of very attractive and complicated timepieces it saw in those 10 years. Through the FWM collection, Cartier really showed what it was capable of in Haute Horlogerie! In addition to the Flying Tourbillon, there were also minute repeaters, perpetual calendars, skeleton timepieces, mystery calibers, and other complications in the collection. And all of them were developed by the Cartier team of watchmakers! 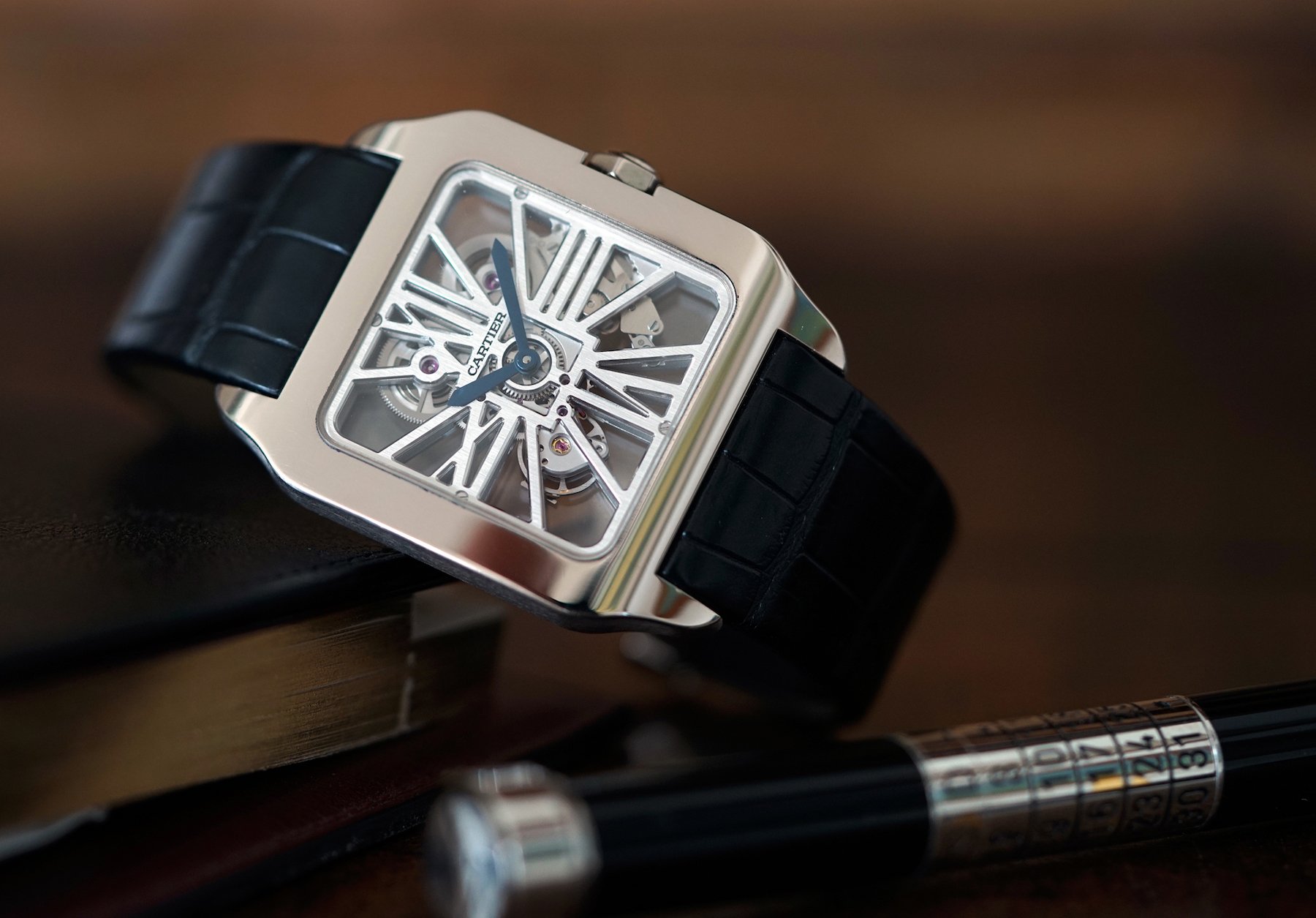 However, the curtain fell for the Fine Watchmaking series in 2018. Vigneron had made his mark at Cartier and knew exactly what the brand had always been good at. He also had a perfect sense of what the market was ready for. Still, to make this decision was quite a step indeed, especially considering the massive investments during the FWM years. But do not think that these developments were all in vain. I will come back to them later on in this article.

The Collection Privée, Cartier Paris series still garners an ever-growing amount of interest from collectors. The models, however, have been sold out for years. Now, auctions are the only opportunity for serious collectors to obtain watches from this exclusive line. Vigneron understood this well and made the right decision to not continue the CPCP collection. Rather, he chose to introduce a new line that was again based on classic Cartier case designs. These models, however, would have a slightly more modern look and house mechanical calibers. 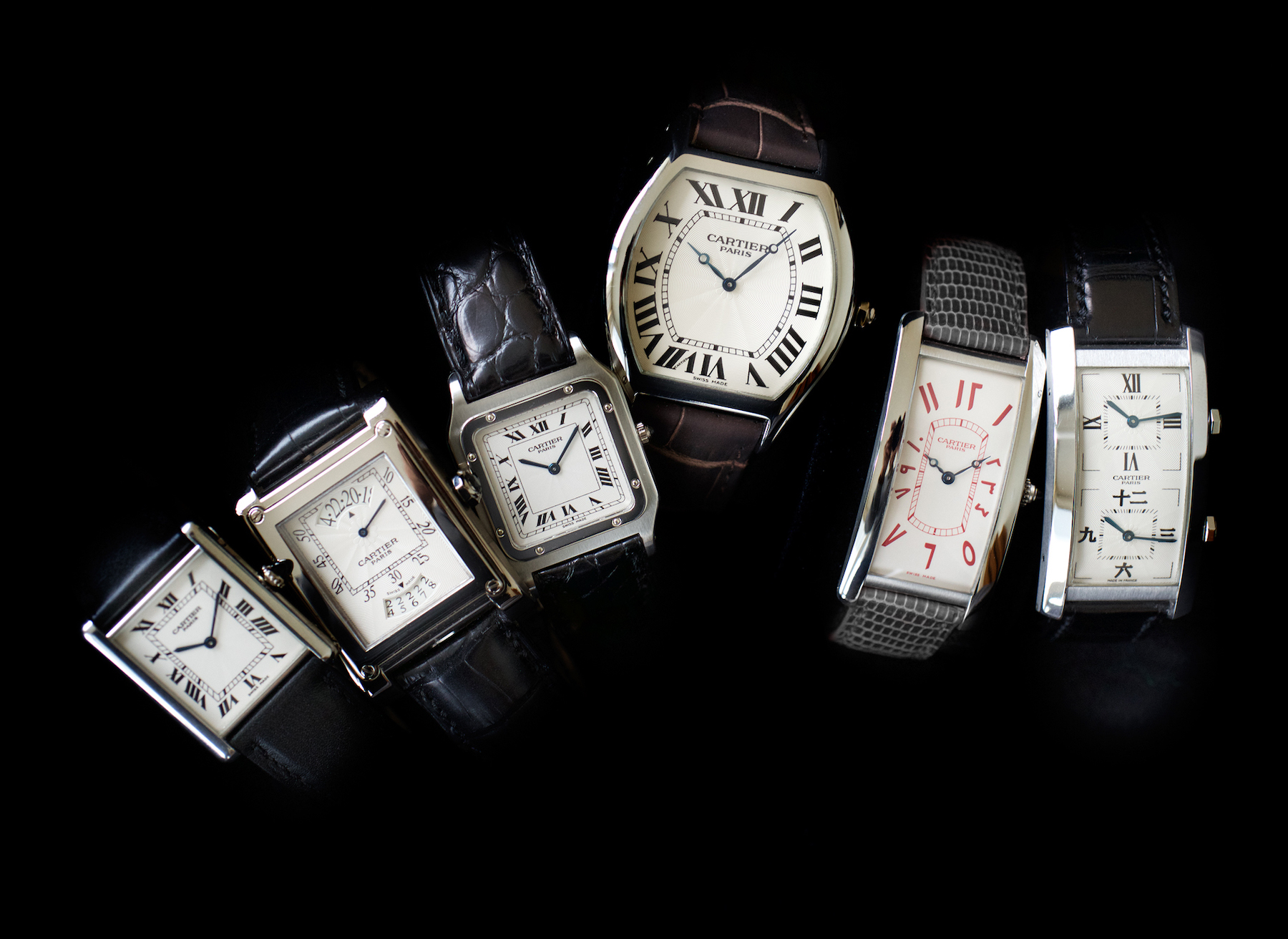 The Cartier Privé series offers more versions per model and often also contains a skeleton version of each. Since 2019, Cartier Privé has been the brand’s high-end line, and most models usually sell out pretty quickly after release, especially those in platinum. The timepieces in this series all have mechanical manufacture movements developed by Cartier.

Although there was more focus on the male clientele during the CPCP and the FWM years, Vigneron completely changed course, ensuring that there was much less distinction between products for men and those for women within the collections. This is an appropriate decision that works for a brand like Cartier perfectly. Still, La Maison is very ahead of the curve in that regard. The macho culture, which many men aspired to for a long time, is decreasing. This is especially true in Europe and Asia, where we also see it in the street scene. Never before have we seen so many men wearing one or more bracelets in public, and an increasing number of people are preferring smaller watches again. Whereas 42-44mm watches were the trend for a long time, we now see more and more 38mm and 36mm watches.

A logical exception remains, of course, for a brand like Panerai. The Radiomir and Luminor, however, are historically and functionally large and not created in these sizes because the market dictated so. But let’s stick to the Cartier collection. The distinction between men’s and women’s models has become much smaller, and many watches (and Cartier bracelets) are therefore worn by men and women. 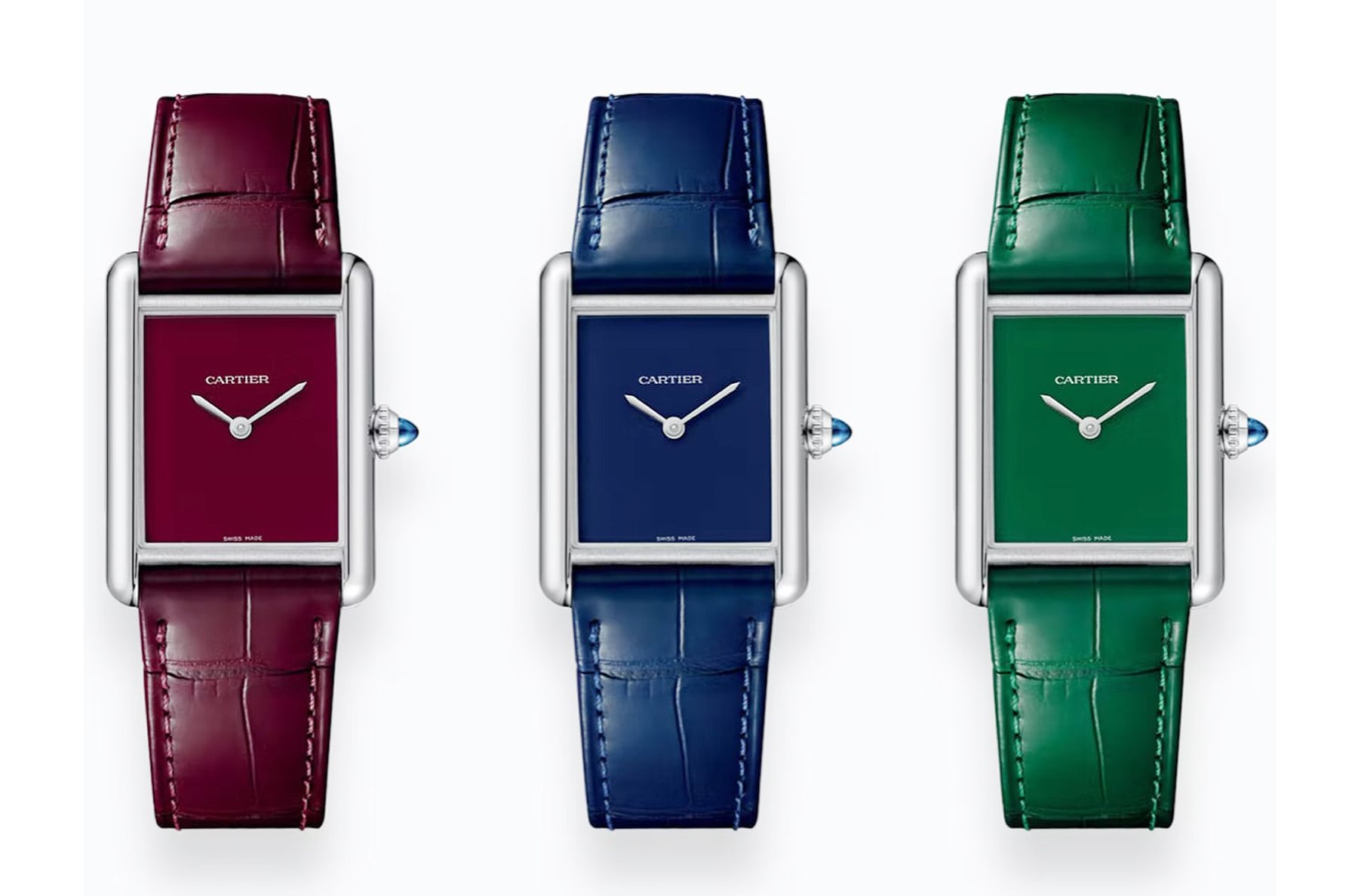 The latest “Must Tanks” with the red, blue, and green dials are a good example of this. Only the large size was available for this model, and still, the watch is popular with both men and women.

And there is another aspect that is quite remarkable. We know that Cartier has always been the “King of Design” and that, historically, the shape of the watch was always the most important thing for the brand. Admittedly, La Maison had forgotten this a bit in the ten years before Vigneron took the reins. This attitude, however, is now back again. Likewise, consumers are more interested in the shape and the looks of Cartier watches than ever before. In fact, the trend is so strong that a quartz caliber, which years ago was not acceptable for a men’s watch, is now, at least within the scope of Cartier, an acceptable choice for most men. Now, the watch itself and the design are what count, and the quartz movements hardly garner any complaints anymore. This is a huge achievement that Cartier reached in a very short time. 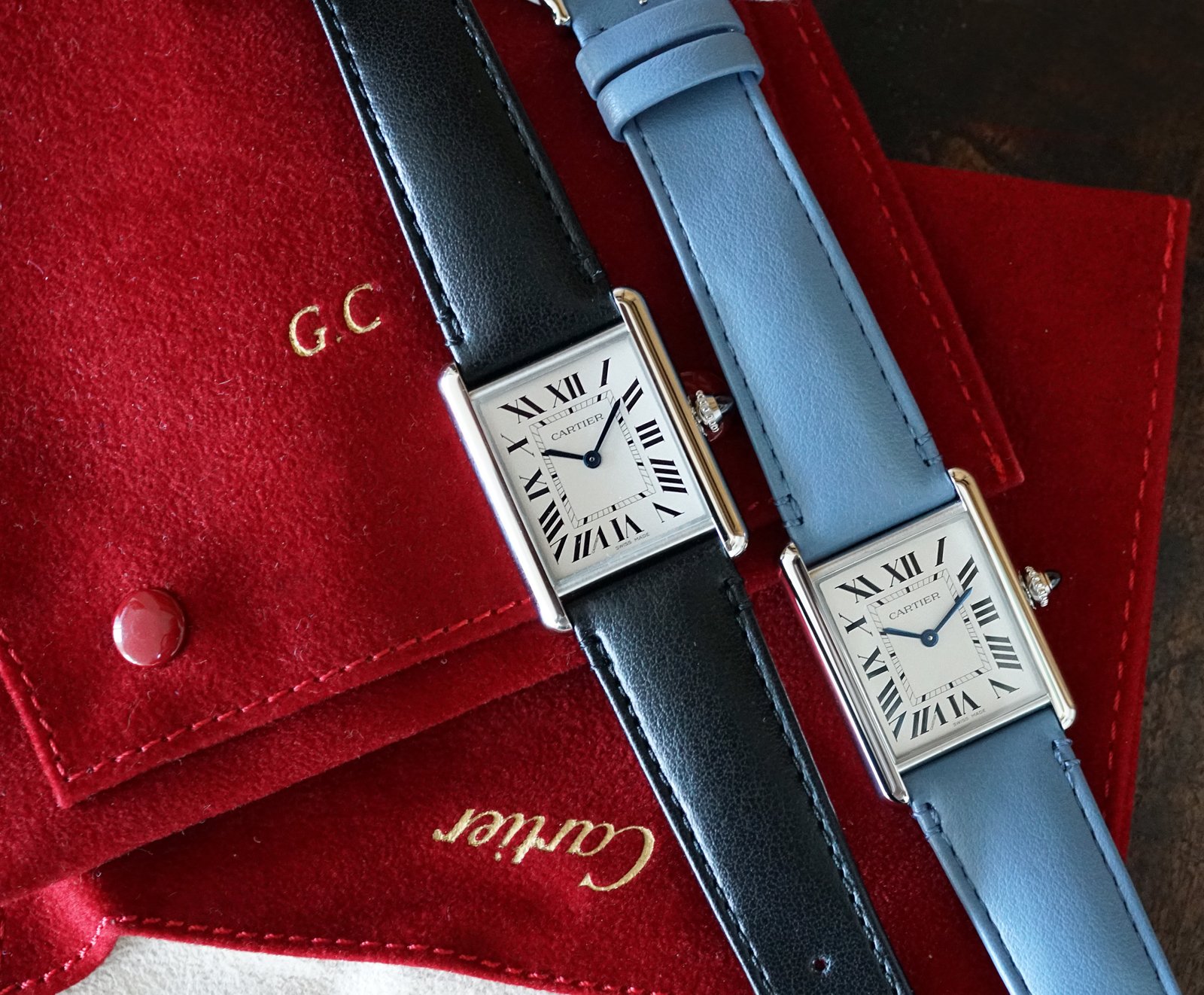 But the brand went even a step further in releasing the Tank SolarBeat. This watch looks exactly like a Tank Louis Cartier with the classic dial, but it features perforated numerals that absorb light to feed the solar cell. The demand for this piece, especially among men, was and still is so high that there is a real shortage. Personally, I hope that when the production and manufacturing are under control, we will see more models with a solar-powered movement. 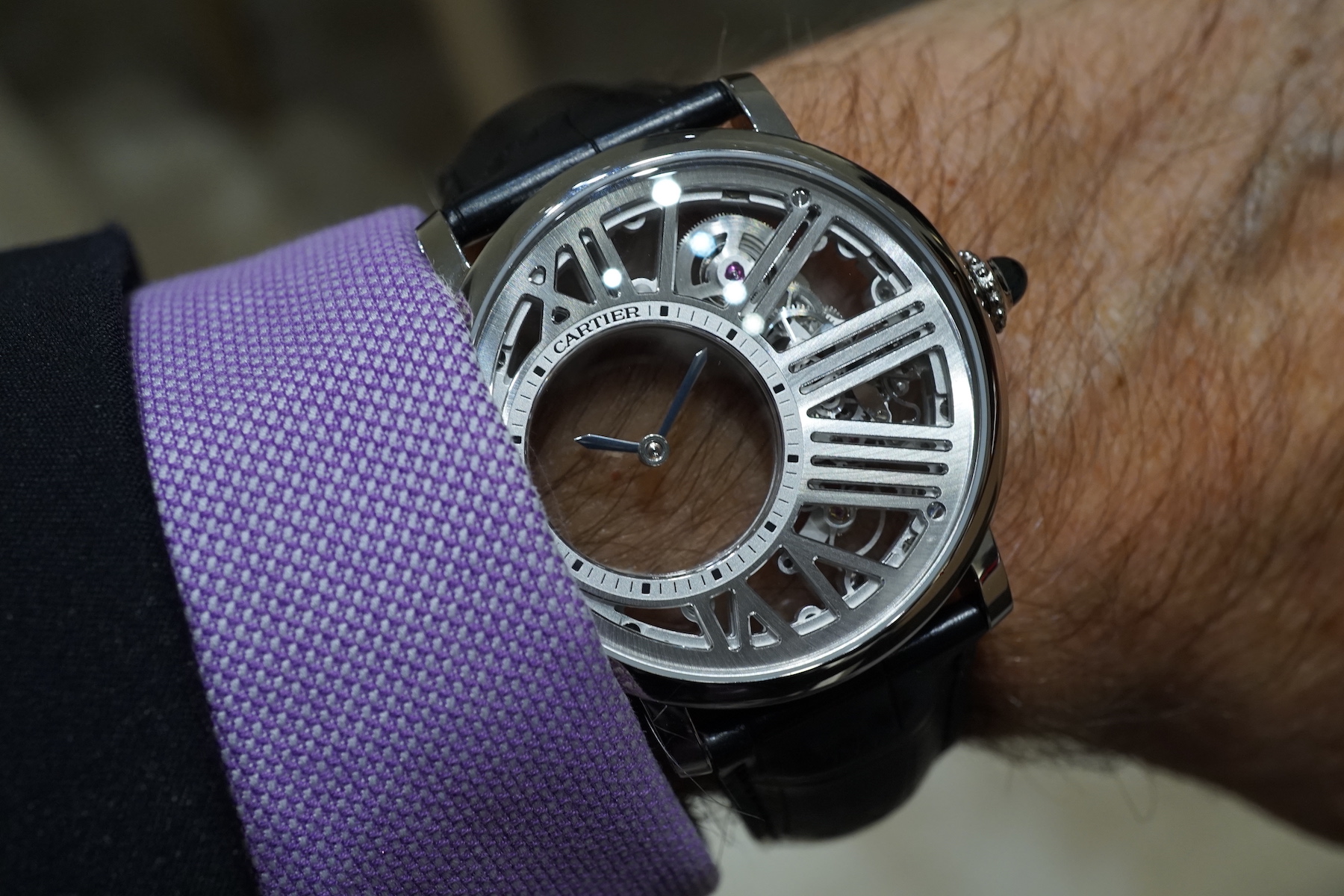 Now, do not entertain the idea that the investments of the FWM years that I mentioned at the beginning of my write-up are lost. On the contrary! Cartier is, after all, the owner of the range of high-end calibers that were produced between 2008 and 2018. Going forward, La Maison will probably release some of them on a limited basis and in suitable cases.

An example is this year’s Rotonde Mass Mystérieuse, featuring the floating Calibre 9801MC. This is an amazing timepiece that had been worked on for years but was not yet finished when the FWM series came to an end in 2018. But Cartier has had its watchmakers finish this remarkable caliber, making it one of the highlights of the Watches And Wonders show in Geneva.

The Flying Tourbillon caliber also returned to the collection, finding a home in the 41mm Pasha case. It is actually the same caliber as before, but now without the Geneva Seal markings, as Cartier no longer manufactures and assembles its tourbillon models in Geneva.

After some exciting years with a few ups and downs, Cartier is back and now extremely popular among a large range of serious collectors. Did collectors always follow the auctions, especially for Patek Philippe, Rolex, and Audemars Piguet? Will Cartier be the new kid in the world of auctions that attracts all the attention? Still, Cyrille Vigneron guided La Maison back to the realms in which it has always excelled — style and design. Now, the slightly modernized watches are supplemented with mechanical and solar-powered movements. And finally, there’s always the occasional high-horology masterpiece to show that Cartier can do so much more than the untrained enthusiast realizes!