The SIHH 2010 will be held from the 18th of January till the 22nd of January 2010. During this show, Vacheron Constantin will be presenting their new Historique Ultra-Fine 1955 and 1968 time pieces. In today’s world of horology, it seems that watches can’t be bulky enough while a few decades ago, it showed true craftsmanship when a time piece was as flat as possible. Since a year or so, I noticed that there is quite a number of fellow watch collectors and aficionados that is akin to reduce diameter sizes and heights. Vacheron Constantin is the brand they’ll need to take to look at in 2010, with their Historique Ultra-Fine timepieces. 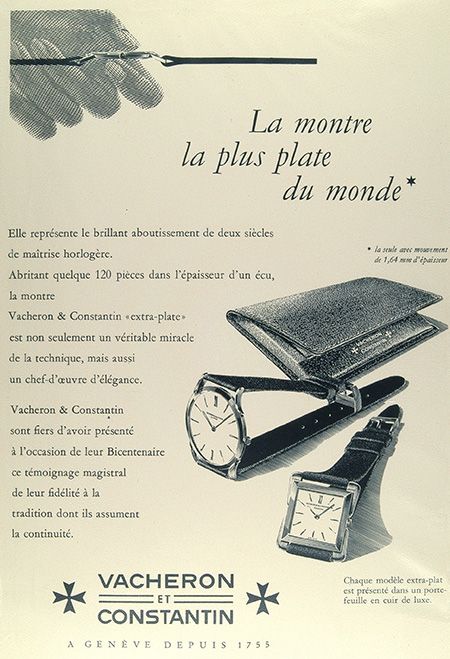 In the 1950s and 1960s, Vacheron Constantin introduced the world’s thinnest wristwatches and today, they revive the quest for ultra-thinness with the Historique Ultra-Fine 1955 and 1968 models. The 1955 model represents a round case ultra-thin watch with a caliber 1003 movement, only 1.64mm thick, making the watch having a total height of just 4.10mm. This results in the Ultra-Fine 1955 being the thinnest watch in the world. The mechanical manual winding movement is based on the original caliber 1003 from 1955, but rebuilt in 18ct gold and bearing the Hallmark of Geneva.

Vacheron Constantin (caliber 1120) and Audemars Piguet (caliber 2121) are the only manufacturers to still have these ultra-thin movements in production. Patek Philippe used it (under caliber number 28-255) during the first 10 years of the Nautilus timepiece before switching to a different movement, bearing caliber number 335SC.

The Ultra-Fine 1955 timepiece is based on Vacheron Constantin’s reference 4961 (introduced in 1955) since that particular model already embodied a decidedly modern touch at the time of its launch. The 36mm 18 ct pink gold watch case of the Ultra-Fine 1955 is water resistant to 30 meters and has a transparant caseback using a sapphire cyrstal.

The Ultra-Fine 1968 timepiece is based on reference 7614, also in an 18ct pink gold watch case and measures 35.2 mm along its sides and is even thinner than its historical predecessor: 5.5 mm compared with 6.52 mm, making it one of the thinnest watches in its category (of watches with a self-winding movement).

By choosing to equip these Historique timepieces with the same legendary vintage calibres ?¢Ç¨Äú the 1003 and 1120 rebuilt for the occasion and now bearing the independent and sovereign Hallmark of Geneva certification ?¢Ç¨Äú Vacheron Constantin is shows their authority when it comes to exceptional classic watches.

Pictures courtesy of Vacheron Constantin. Thanks to Jenna Guarneri.