Let me start by saying that this green dialed Sinn 104 St Sa A G with its list price of €1250 is just a slightly different version from the standard Sinn 104.

The 104 could be seen as the entry-level watch from the watchmaker from Frankfurt am Main in Germany. But that doesn’t mean it is cheap. I would say that the Sinn 104 is on my shortlist when it comes to watches around a 1000 Euro. This new green version that was introduced during Baselworld 2019, is slightly more expensive than the regular version (starting at €1150), but I am sure that this difference can be neglected. 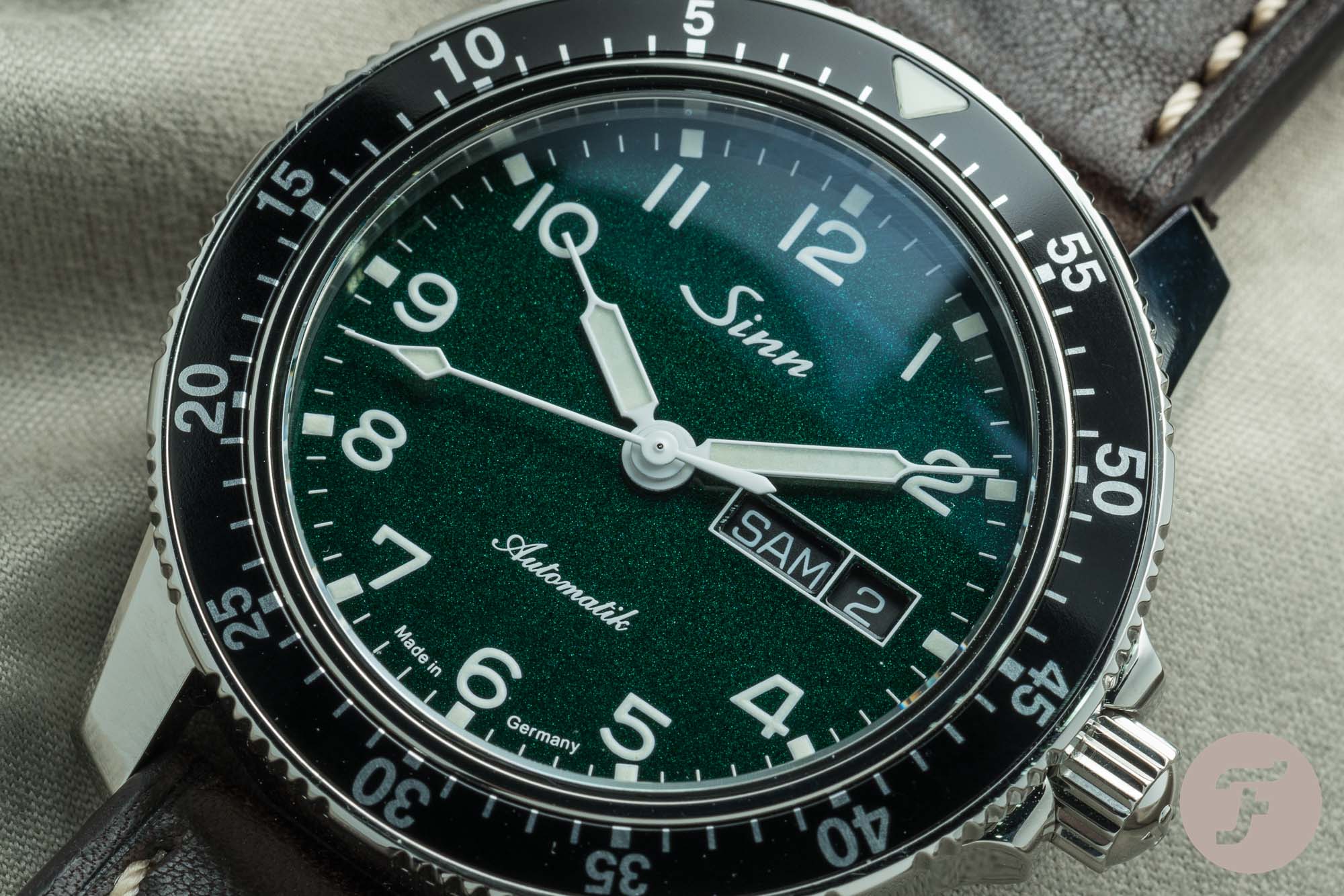 Sinn has a special place in my horological heart. Although I currently do not own one of their watches, some of my colleagues do. Sinn made (and still makes) some pretty impressive watches, of which the original 142 is still among my absolute favourite chronographs. It is one of those watches that I regret selling, but at the time I had probably certain reasons to let it go (in a trade). Sinn is known for its highly functional watches. Form follows function, applicable to many products made in Germany. The perfect examples of this are the Sinn EZM and U(boat) models. On the other hand, with their Frankfurter Finanzplatz watches Sinn also knows how to create elegant timepieces. 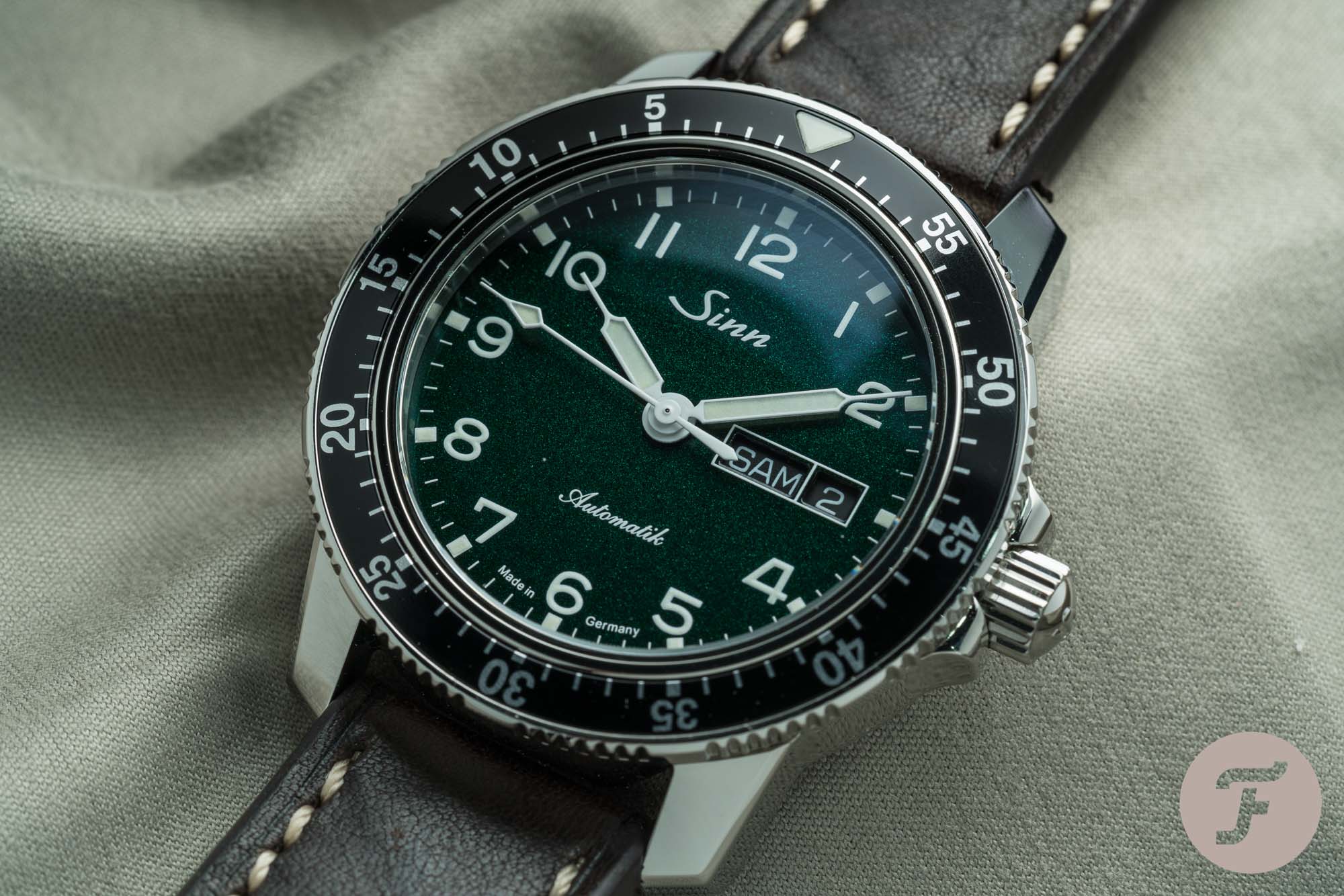 In recent years, we’ve seen the rise of green dials. Perhaps the Rolex Submariner 16610LV (‘Kermit’) was one of the first that made its way to the public, but in fact, green dials have been around much longer. But ever since the popular Kermit and perhaps even more popular Submariner ‘Hulk’, the green dial is making its comeback. Even last week we showed you a beautiful new Omega Seamaster 300 with green Malachite dial. But what about the line-up of green dial Seikos? Green dials aren’t very new to Sinn, you might remember their Jagduhr (3006) from last year, as pictured below. 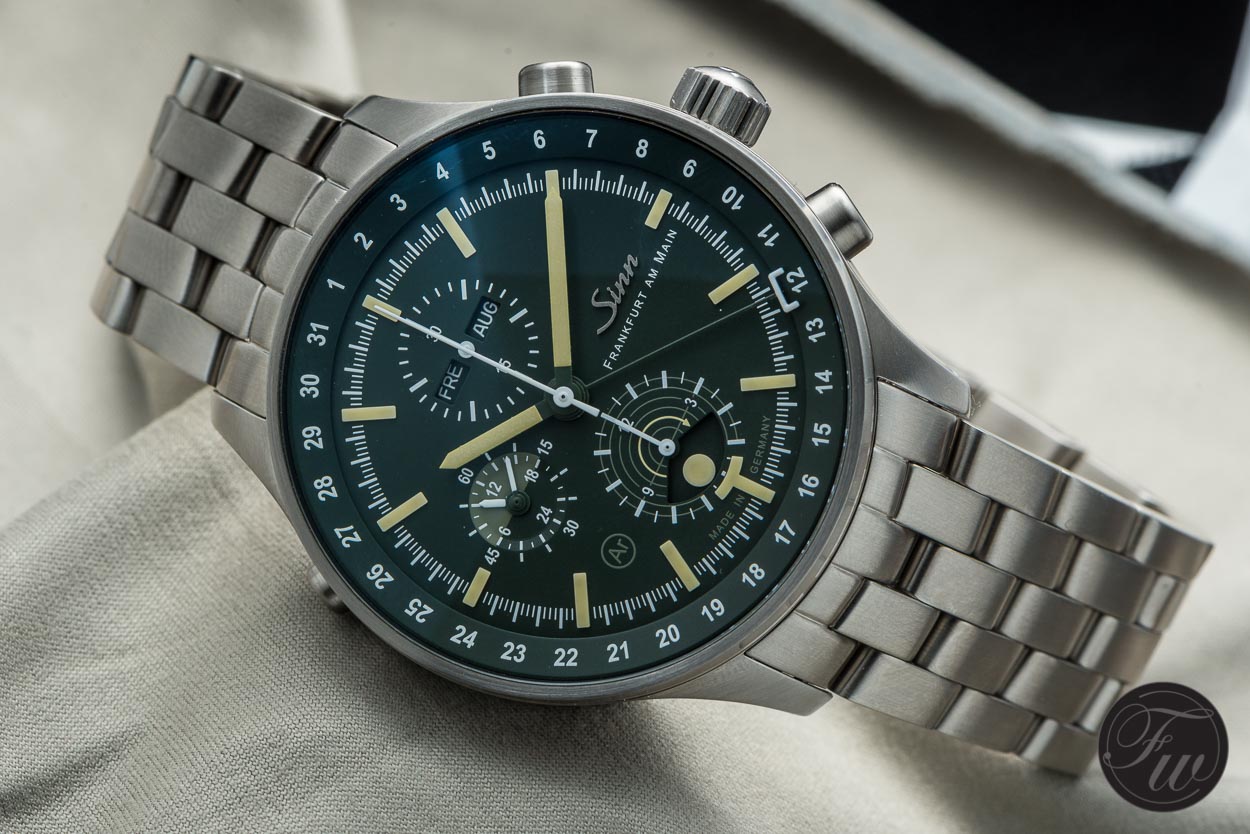 The dial of the Sinn 104 St Sa A G is a bit more grainy though. The metallic green dial appears to have a little structure, which gives it a nice depth. The Sinn 104 is now available with five different dials: black, white, blue, anthracite and green. Although there’s nothing wrong with the black dial, I am somehow mostly drawn to the white dial Sinn 104 St Sa I W and now this green 104 St Sa A G. An overview of all Sinn 104 variations can be found here.

Instead of the usual Sellita, this green Sinn 104 has an ETA movement. 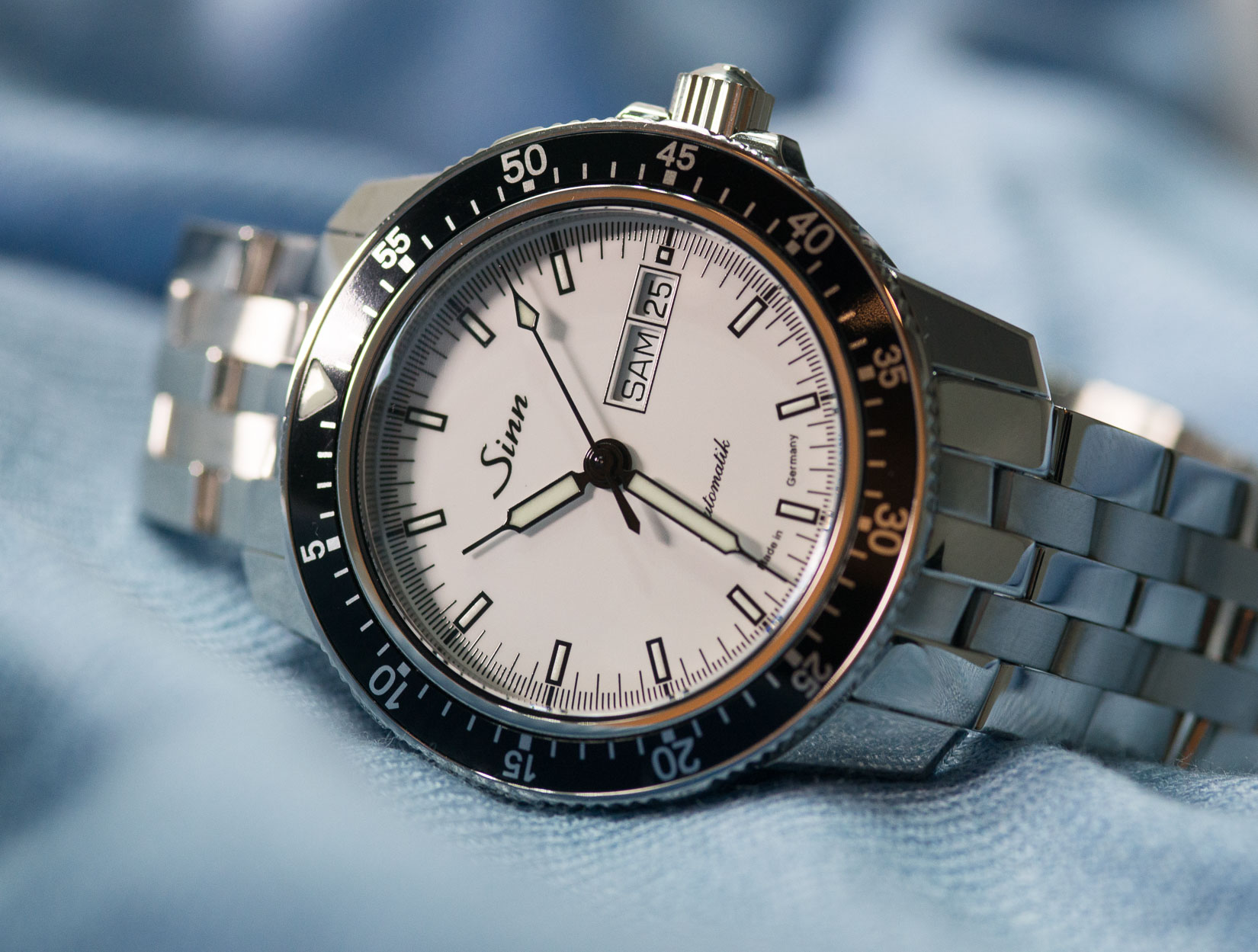 The Sinn 104 with green dial is basically a 104 like all the other variations. I remember when these were introduced and having a retail price of under 1000 Euro. That was a super strong proposition, but this price point was not sustainable for Sinn. The Sinn 104 now starts at 1150 Euro, for a version on a leather strap. This green dial 104 St Sa A G is slightly more expensive than that, it is up to you if you think it is worth it.

Besides the colour of the dial, this limited edition (500 pieces) Sinn 104 St Sa A G has a different movement as well. Instead of the usual Sellita SW 220-1, this green 104 has the ETA 2836-2 movement. In the rotor, there’s “Eine von 500” engraved, which means – you’ve guessed it already – “One of 500”. I rather would have seen a unique number here, as that offers a bit more uniqueness to this limited edition. Sinn is not alone in using this way of indicating it is a limited edition, IWC uses the same method. 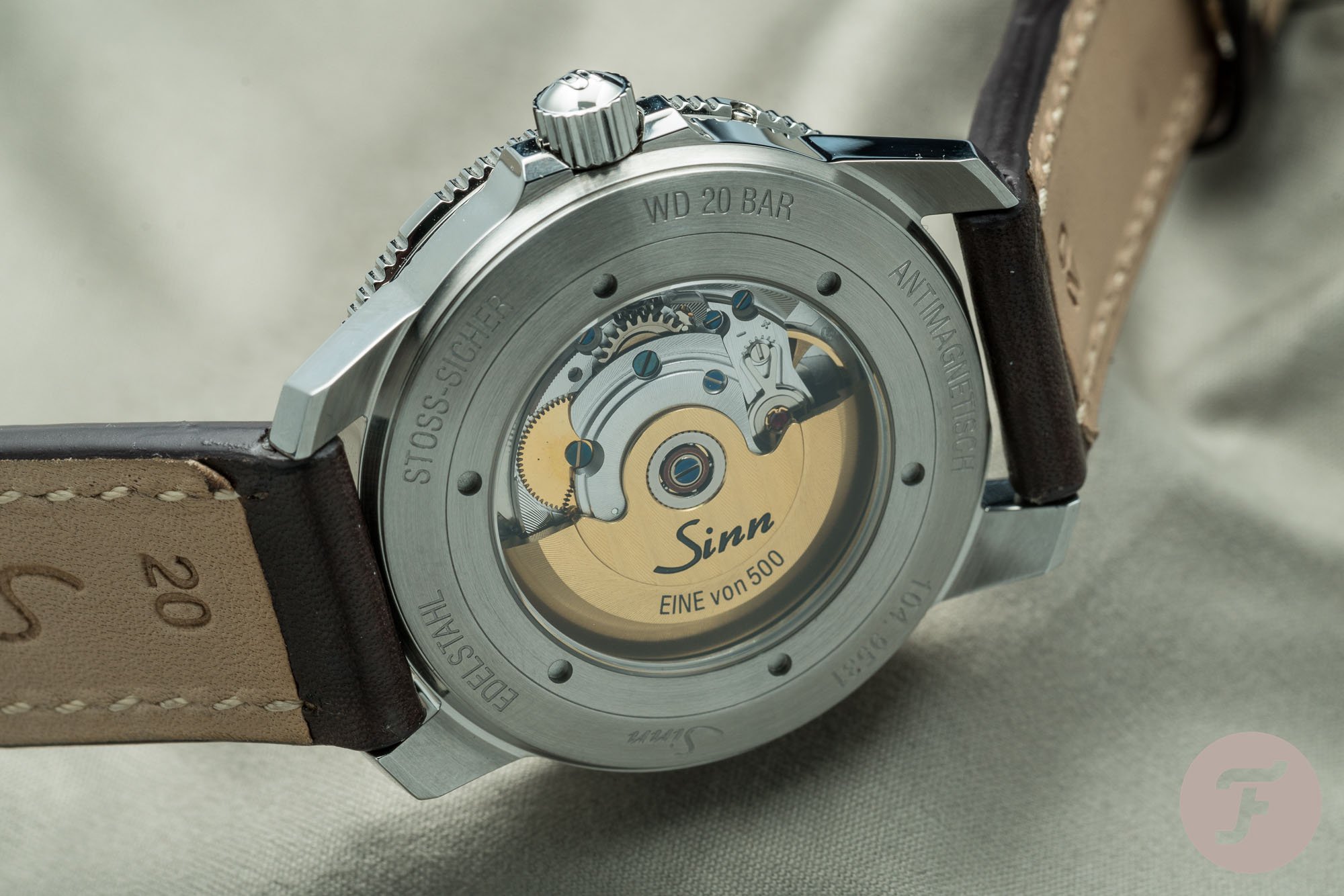 The stainless steel case is identical to the other 104 models and has a diameter of 41mm and has a thickness of 11.5mm. Of course, the bi-directional pilot’s bezel also stayed. It is using the Captive technology that has been developed by Sinn, to ensure that the bezel will stay put on the watch when exposed to hard knocks or drops. All design aspects that make the 104 a very basic but functional pilot’s watch have been respected. On top of that, the Sinn 104 is water resistant to 200 meters and uses a screw-down crown. Sinn made sure that the 104 meets the DIN (German standards) for water resistance and anti-magnetism, for example. Functionality wise, despite using the ETA 2836-2 movement instead of the Sellita SW 220-1, everything stayed the same. There’s a hacking function (stopping the seconds hand when pulling out the crown) and quick-set day date. An advantage of the ETA 2836-2 is the longer power-reserve (42 hours instead of 38). 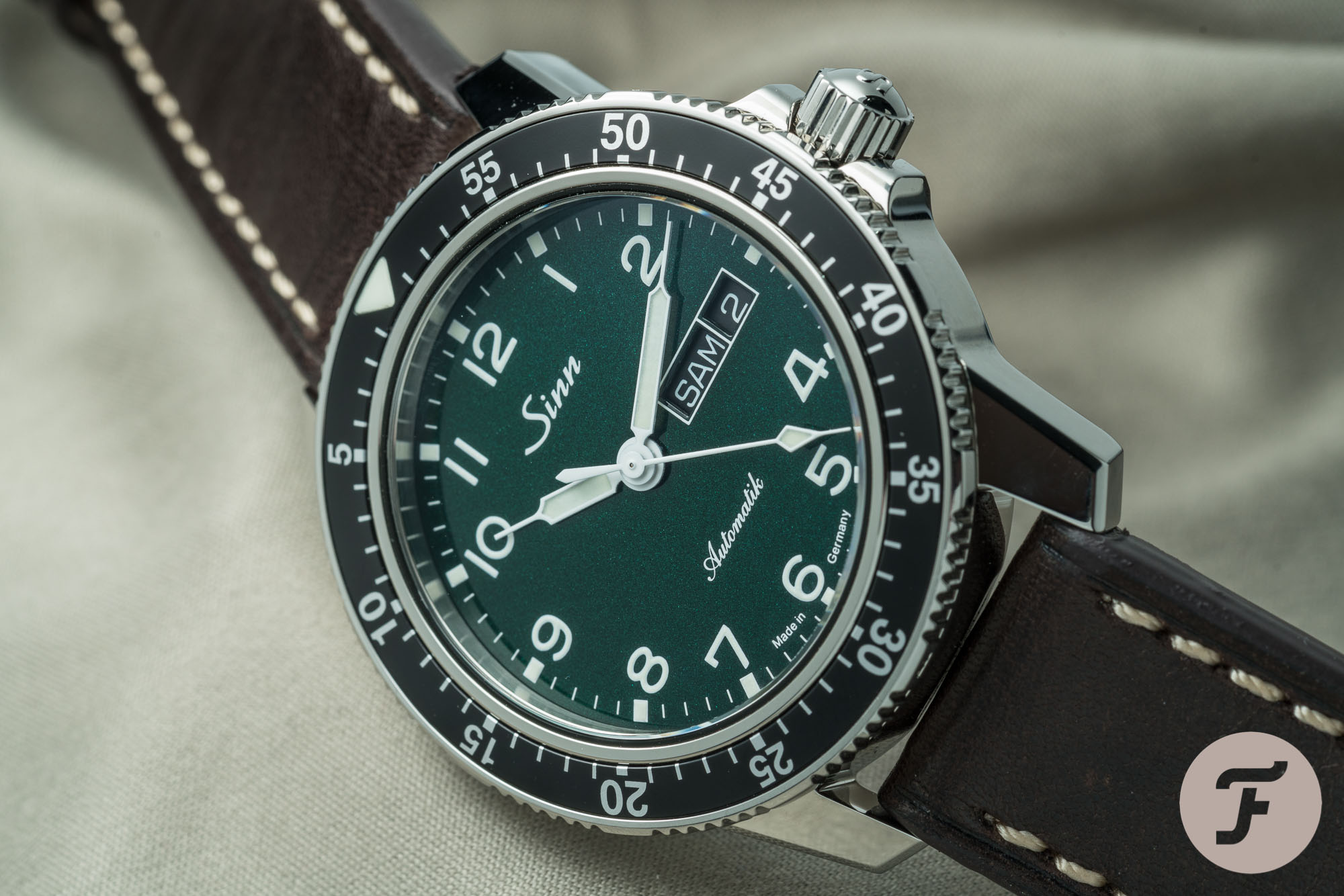 Where the normal Sinn 104 model starts at €1150 (with leather strap), Sinn added another 100 Eypo for the green dial and ETA based movement. On the official Sinn website (where you can also order on-line) this new green 104 is already sold out, but they also indicate that it is still available at some of their retailers. In case you are interested, it is best to contact Sinn directly to ask them about the retailers who still have these green 104 models in stock. If not, consider the 104 with a white, blue, black or anthracite dial. They’re all a lot of bang for the buck and an awesome collection starter as well as a nice addition to an already existing collection.