A woman or man who’s in charge of a large transcontinental aircraft, its crew, and its passengers deserves a watch that underlines that person’s role. A Big Pilot could do the job when you’re piloting a single-seater, but when cruising wide-body passenger jets, a complicated Big Pilot is more fitting. And while I’m no captain, I went soaring high above the clouds with the IWC Big Pilot Perpetual Calendar anyway.

I must admit I had some problems during take-off. I mean not actually becoming airborne, but putting on the XL complicated Big Pilot took some effort. Not that the combination of calfskin strap and folding clasp are difficult to understand or operate, but because it takes some time to get the watch snug on the wrist. And this top-heavy, 46.2×15.4mm steel ref. IW503605 needs to be snug on the wrist. And that’s because when it moves around on it, it just feels highly unpleasant. But once I got it in place (and left it no place to go), the watch felt comfortable. It was certainly noticeable because of its weight, but way more noteworthy because of its size and appearance — this watch has charisma. 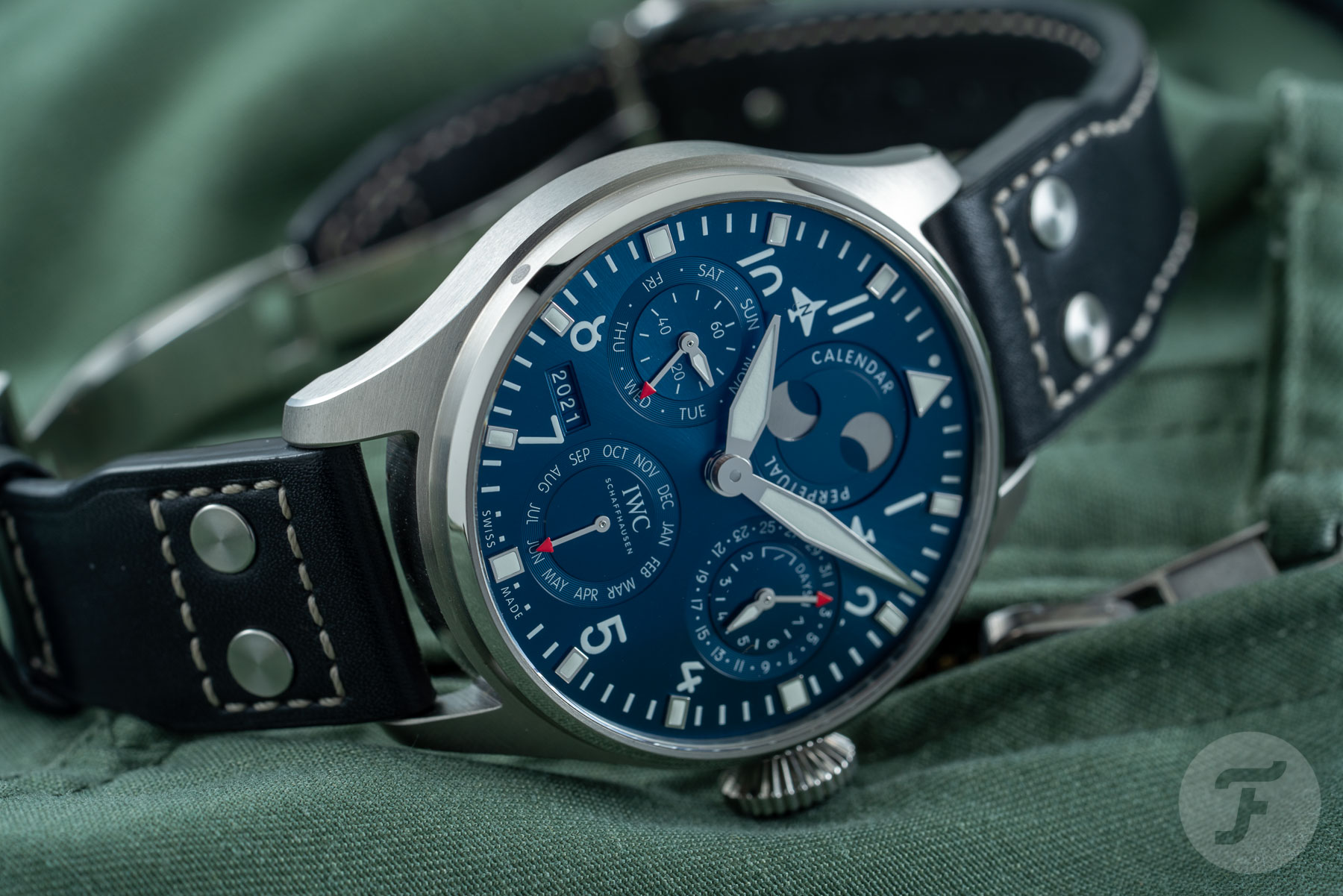 I bet you’re thinking something along the lines of “I have seen this watch before…” And you’re not (completely) wrong. In the past there were Big Pilot’s Watch Perpetual Calendar models, but they were always limited editions. This year IWC decided to add the “BP QP” to the standard collection. And although the watch looks familiar, you shouldn’t take it for granted.

… and that makes this blue BP QP a solo pilot that plots its own course and doesn’t follow the much-traveled retro route.

The new watch’s familiarity also lies in the fact that the large surface of the dial is a perfect canvas on which to paint all the indications of the perpetual calendar. Especially since IWC decided to use its “Le Petit Prince” blue as the background and clear white to draw most of the details. I say most because the tips of the hands that indicate the day, date, and month have a bright red tip. No “fauxtina” to be seen anywhere and that makes this blue BP QP a solo pilot that plots its own course and doesn’t follow the much-traveled retro route. 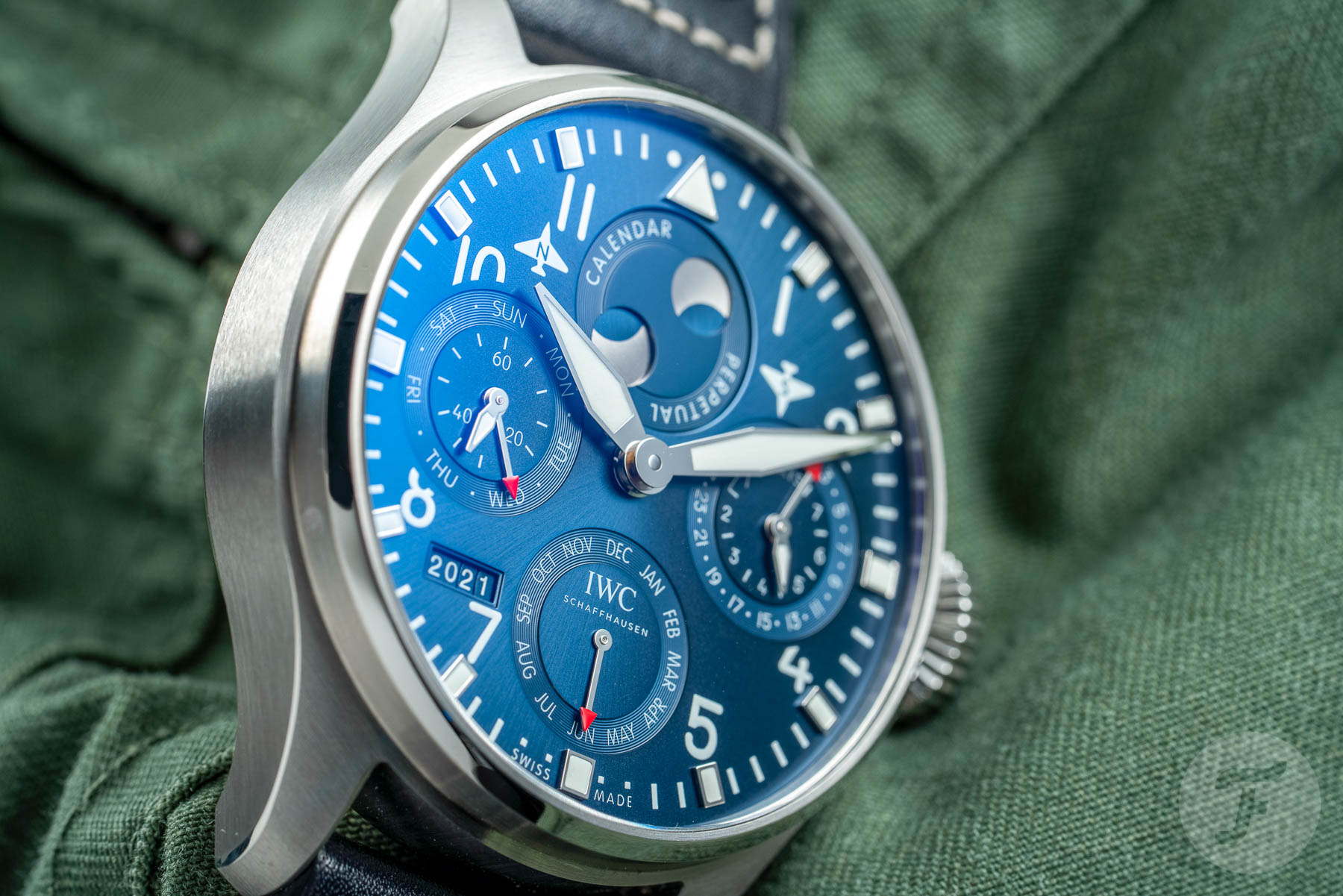 Designed by one of the most likable master watchmakers

I was tempted to refer to the combination of blue and white as timeless, but since we’re dealing with a watch with a perpetual calendar, that seems inappropriate. This QP requires its first correction in the year 2100. It’s clever enough to automatically recognizes different month lengths as well as leap years. And on top of it all, it displays the four-digit year until the year 2499. This watch is, quite simply, all about time. 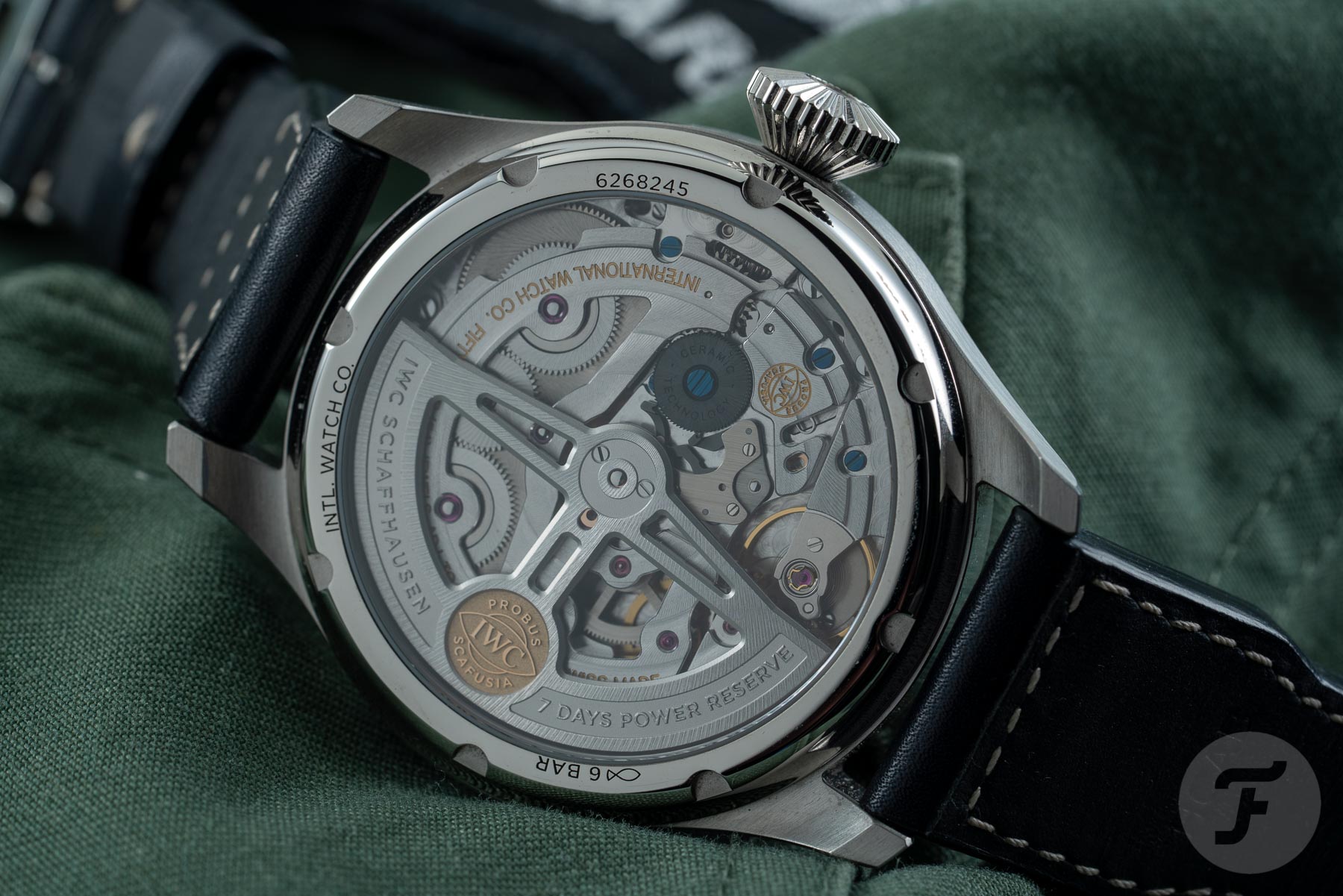 What IWC did is place a calendar module (comprising around 80 individual parts) on top of the in-house caliber 5216 with two barrels and seven days of power reserve. All that power also drives the module by a single nightly switching pulse. I should mention that the whole system was developed in the 1980s by IWC’s former head watchmaker Kurt Klaus. Herr Klaus is one of the most likable master watchmakers alive. 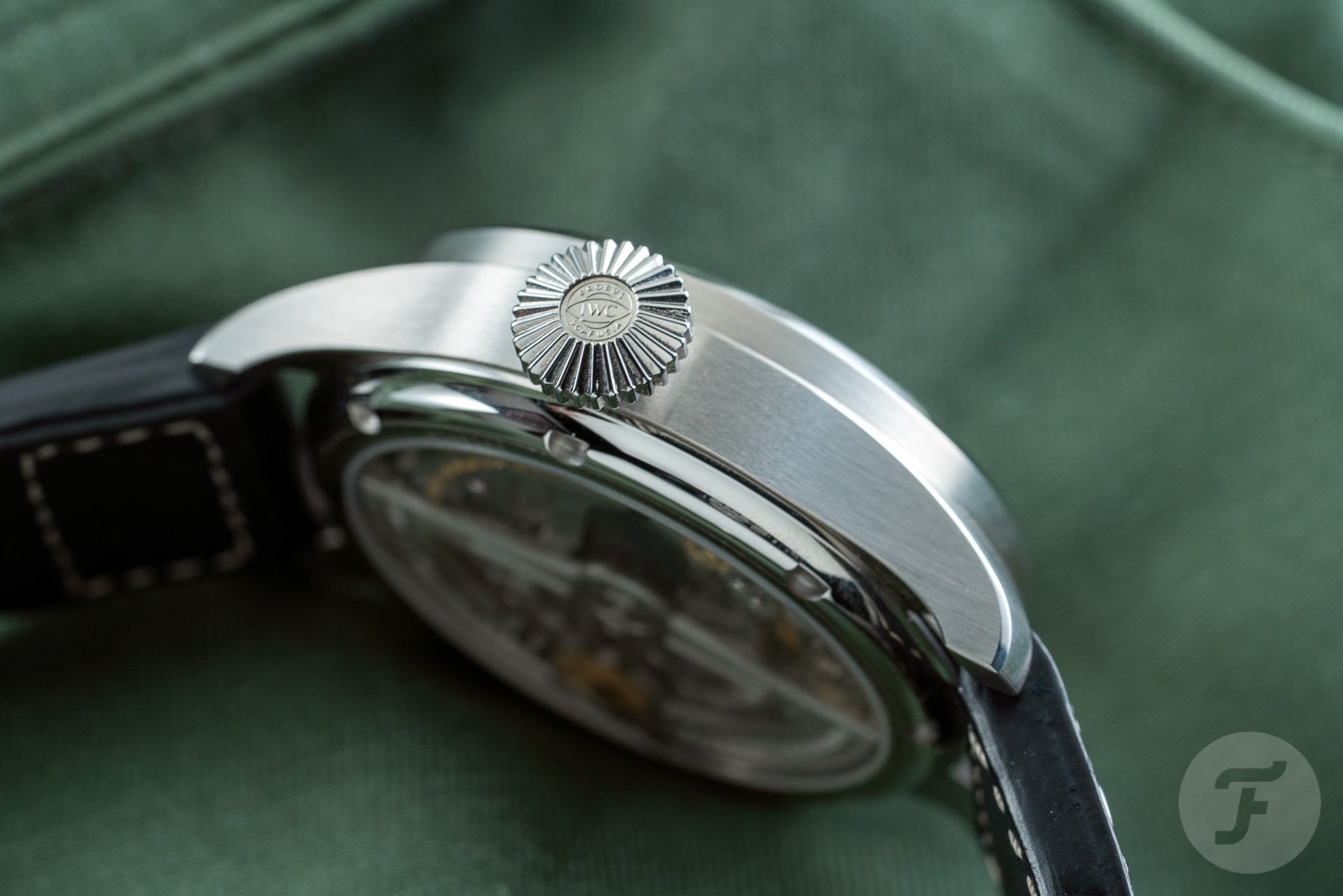 Programmed for a mind-boggling 577 years

The automatic movement features a Pellaton winding system with wear-resistant ceramic components that is visible through the sapphire glass back. Not that you want to have a look at that too often, because once you have the Big Pilot Perpetual Calendar on the wrist you don’t want to take it off. Partly because you will feel naked and light instantly. And also because it’s a really nice watch to wear. 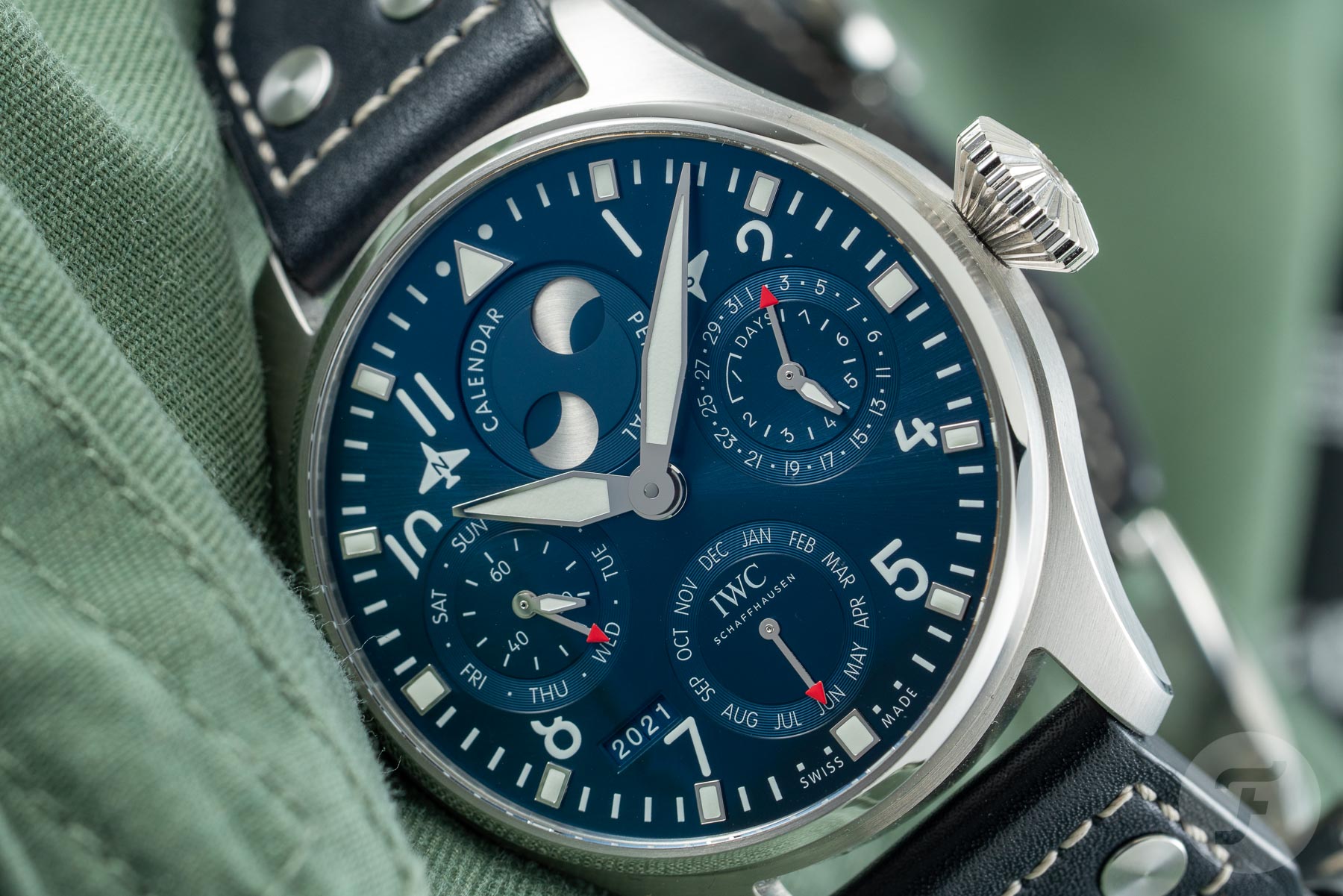 Can I read the indications without my reading glasses? No. Do I need to? Again no. I also didn’t need to adjust the calendar by manipulating the easy-to-use single crown. When I started wearing the watch it was set and ready to go, and I just didn’t want to mess with it. And while the calendar needs sharp eyes, the time is perfectly visible because of the sharp contrast and the shape and color of the very large hour and minute hands. It’s a good thing I know what date and day it is, and the same goes for the year. But the fact that the watch on the wrist mechanically keeps track of the date for many years to come is something special.

I now know why so many watch enthusiasts are obsessed with “QPs”.

When you let of the concept of a micro-mechanical perpetual calendar that is programmed for 577 years you can wear on the wrist sink in, the mind boggles. I now know why so many watch enthusiasts are obsessed with “QPs”. 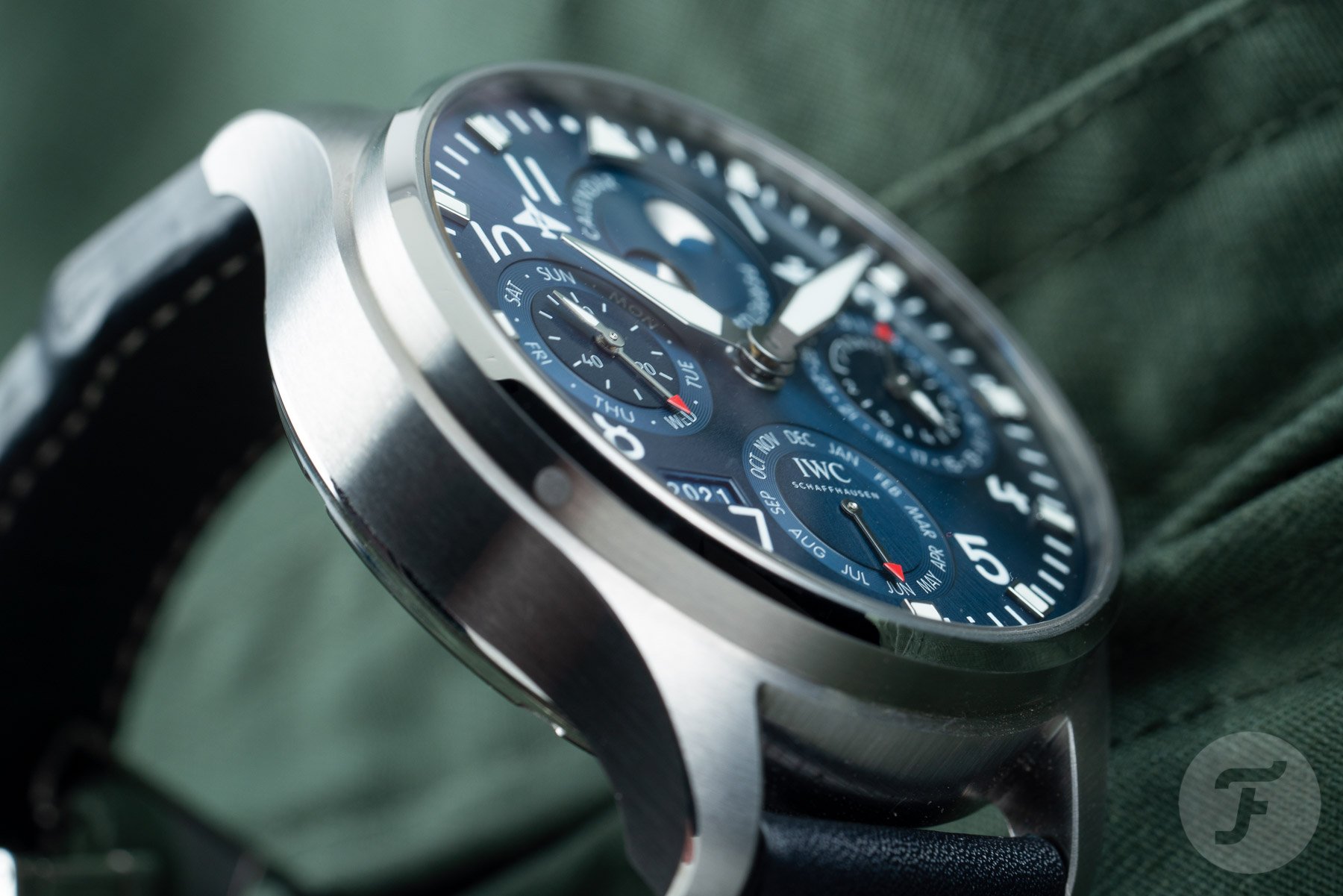 First things first, having the salary of a seasoned airline captain certainly helps if you want to buy the €30,200 Big Pilot Perpetual Calendar. But in all fairness, for 30k you get a lot of watch. And both in terms of size and complication, it currently doesn’t have an equal I can think of. Glashütte Original once made a QP with the looks of a “Flieger”, the Senator Navigator Perpetual Calendar, but they took it out of production quite a few years ago. And the discontinued Breitling Navitimer 1461 Chronograph Perpetual Calendar was only a QP by name. It was actually an annual calendar that needed correcting every four years.

… flying below the radar is not something the aspiring buyer of this BP QP is aiming for.

You also buy a watch that will get noticed. The blue IWC first used in the different “Le Petit Prince” models now appears on the new Big Pilot’s Watch 43 and its bigger and way more complicated brother. And it’s the kind and the large amount of blue that won’t go unnoticed. 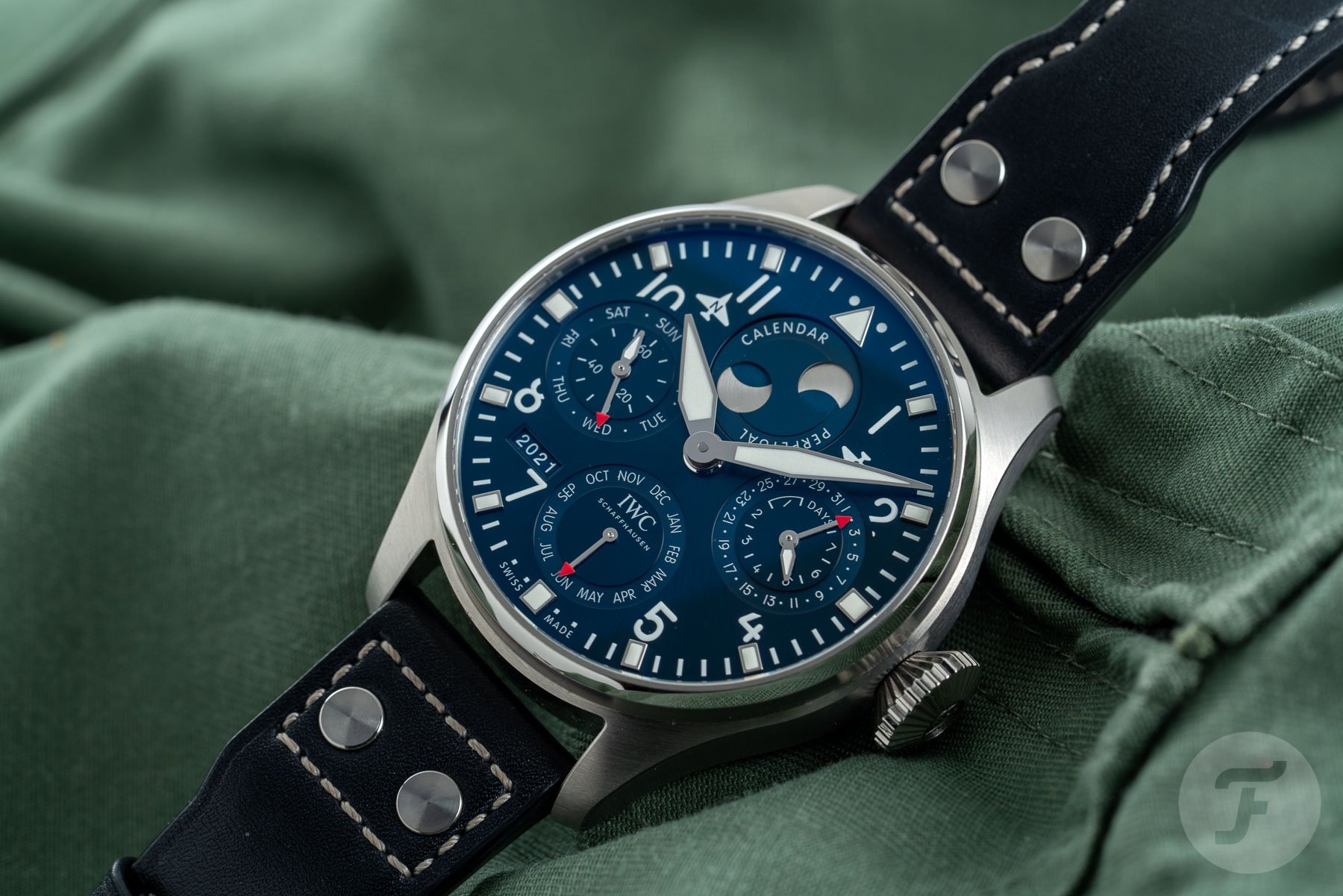 But flying below the radar is not something the aspiring buyer of this BP QP is aiming for anyway. You wear this watch as proudly and prominently as you wear the four stripes on your uniform. And because I’m not wearing any stripes, my “daily beater” would be the new 43mm (not so) Big Pilot with a blue dial. But I didn’t mind show-boating this QP for a while and pretending to be a KLM captain. But that’s between you and me. For more information about IWC’s Pilot’s Watch collection, please visit the official website.