The original IWC Big Pilot’s Watch is a classic. But it’s also an XL heavyweight that you’re constantly aware of. It practically takes a giant to wear the 46.2mm original inconspicuously. The new smaller version of the “BP” comes in a more practical size L. And, although I don’t want to give it all away already, flying on auto with the slimmed-down IWC Big Pilot’s Watch 43 is possible. You’re only aware of the watch when you want to be and that is a massive upgrade.

The new steel Big Pilot’s Watch 43 comes with either a traditional black dial or a more fashionable and contemporary blue variant. The big box we received at Fratello HQ contained the blue-dialed version and came with a brown and a very, very dark blue leather strap — it needs close inspection and a lot of light to discover it’s blue and not black — plus a five-link, brushed steel bracelet.

Both the blue leather strap and the bracelet were outfitted with a quick-change system so I used them both. The brown strap goes really well with the blue dial, but because the strap lacked IWC’s new EasX-CHANGE system, I stuck to the blue strap and the steel bracelet. For your information, a rubber strap with a quick release system is also available, but it wasn’t in the big box IWC sent us. 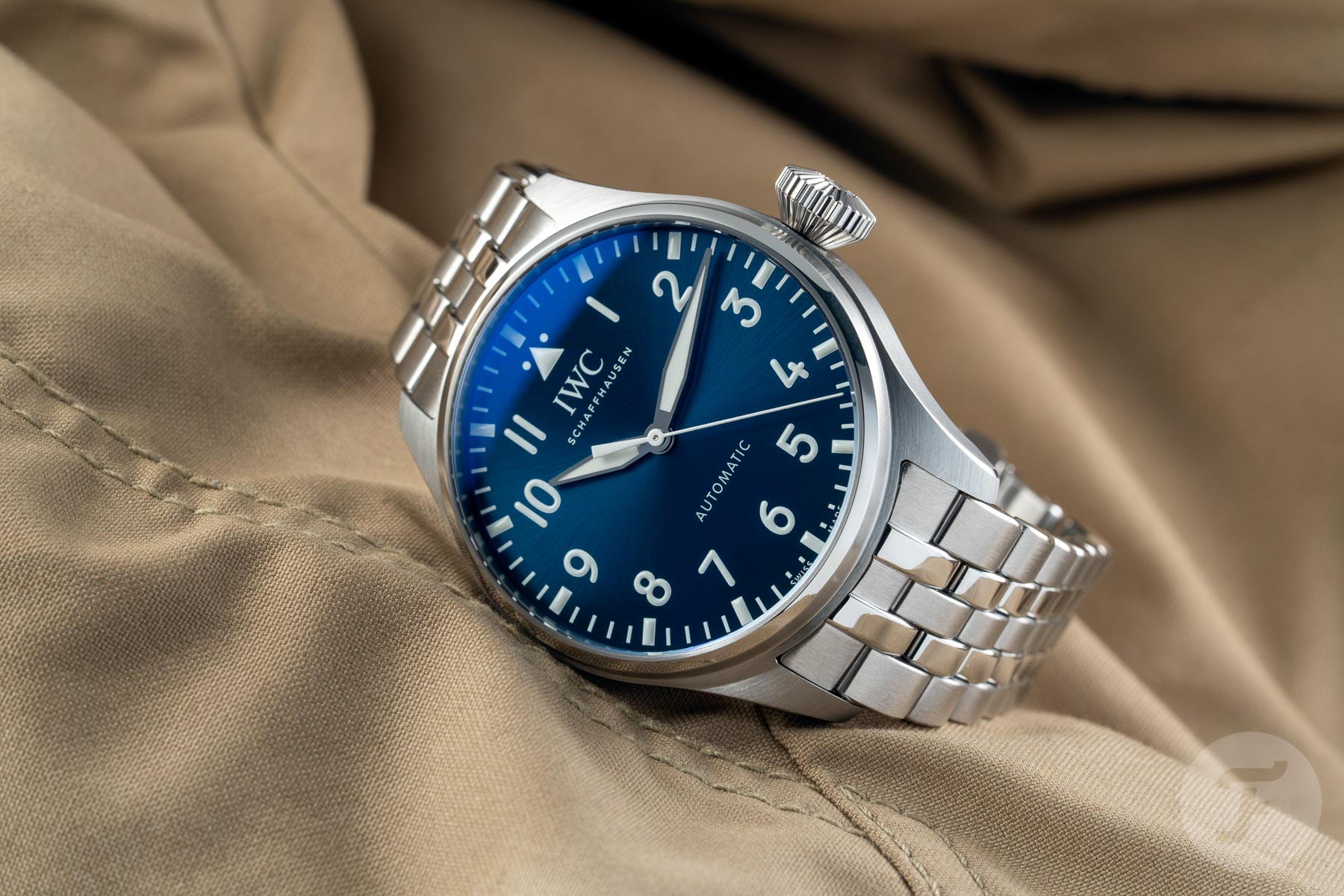 Before I tell you about my real-life experiences with the Big Pilot’s Watch 43, let’s start with a little background and historical information. All modern Big Pilot’s Watches are descendants of the Beobachtungsuhr from the 1940s. That watch was built for bomber navigators to the precise specifications of the German Aviation Ministry. The 55×16.5 mm “B-Uhr” weighed a hefty 183 grams and was made by brands such as Wempe, Stowa, A. Lange & Söhne, and IWC. The B-uhr production spanned from 1941 onwards and the watch had an onion crown for ease of use while wearing gloves, and a specially designed leather strap. With the launch of the 46.2×15.8mm Big Pilot’s Watch Ref. 5002 in 2002 IWC re-interpreted the utilitarian B-Uhr and created a modern icon. The modern “Big Pilot” is bold, big, and can’t be overlooked — there are simply not too many sleeves under which it can hide.

The only “problem” with the modern Big Pilot is its 46.2mm case. Many love it, want it, try it and then reach the conclusion that 46mm+ is simply too big. IWC reaches out by shaving off 3.2mm. The Big Pilot’s Watch 43 still stays true to the primal B-Uhr and also looks like a close relative of the 46.2mm modern version. “With the Big Pilot’s Watch 43 we have returned to the extreme purity of the original B-Uhr designed over 80 years ago and created a simple three-hand watch with no other elements on the dial. Despite its small size, the 43-millimeter case combines a bold look with great wearing comfort,” says Christian Knoop, Creative Director of IWC, during an interactive session preceding Watches and Wonders. 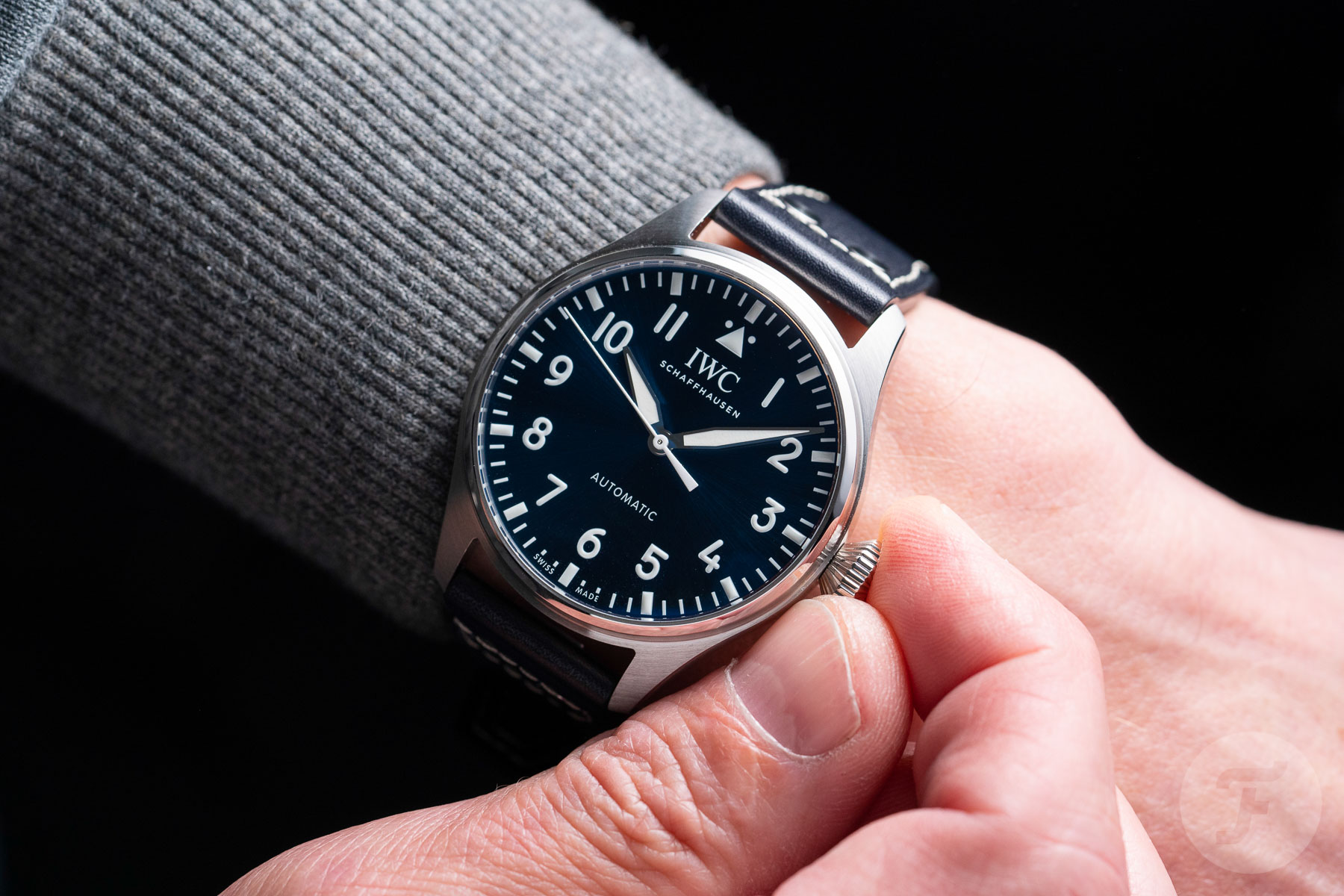 Not a simple reduction

Knoop was really eager to design a new “Big Pilot” with just three hands and nothing else on the dial he explained: “The idea of a pure Big Pilot’s Watch with no power reserve and a date window has been a topic of discussion in the IWC community for years. I’ve always wanted to design a new Big Pilot’s Watch with three hands. Incidentally, the watch is not a simple reduction of the large model. We have carefully reworked and improved every detail, such as the size and proportions of the case and crown, the graphic elements on the dial, and the shape of the hands.” 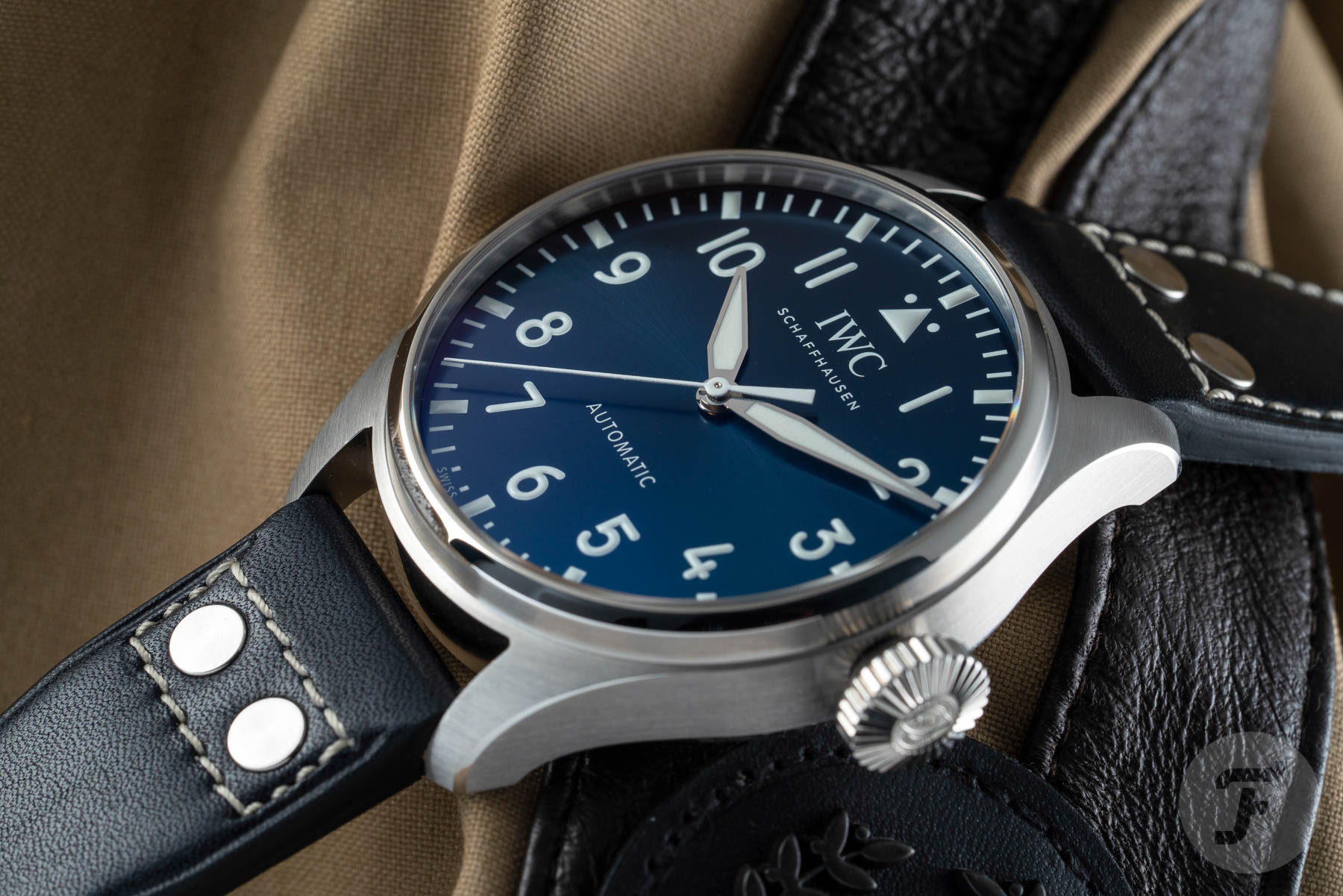 Magnetism is no longer a big threat

Interestingly, the soft-iron inner case to fend off disturbing magnetic fields is absent. The automatic in-house 4Hz caliber 82100 with Pellaton winding mechanism has been fortified with ceramic and silicon components making it naturally more resistant to magnetic influence.

It has a power reserve of sixty hours and comprises 192 components of which some are decorated with Côtes de Genève and perlage. How do I know? Because the movement is visible through a sapphire case back. So unlike its big brother and the original watch from eighty years ago, there’s no obstructing inner case.

I wanted to know whether this movement was entirely anti-magnetic, so I asked IWC CEO Chris Grainger-Herr. “No, the movement is not made entirely from anti-magnetic materials,” he responded. “We didn’t want to create a completely new anti-magnetic caliber, but the use of modern materials has contained the threat of magnetic disturbances sufficiently. And therefore we opted for an open case back.” 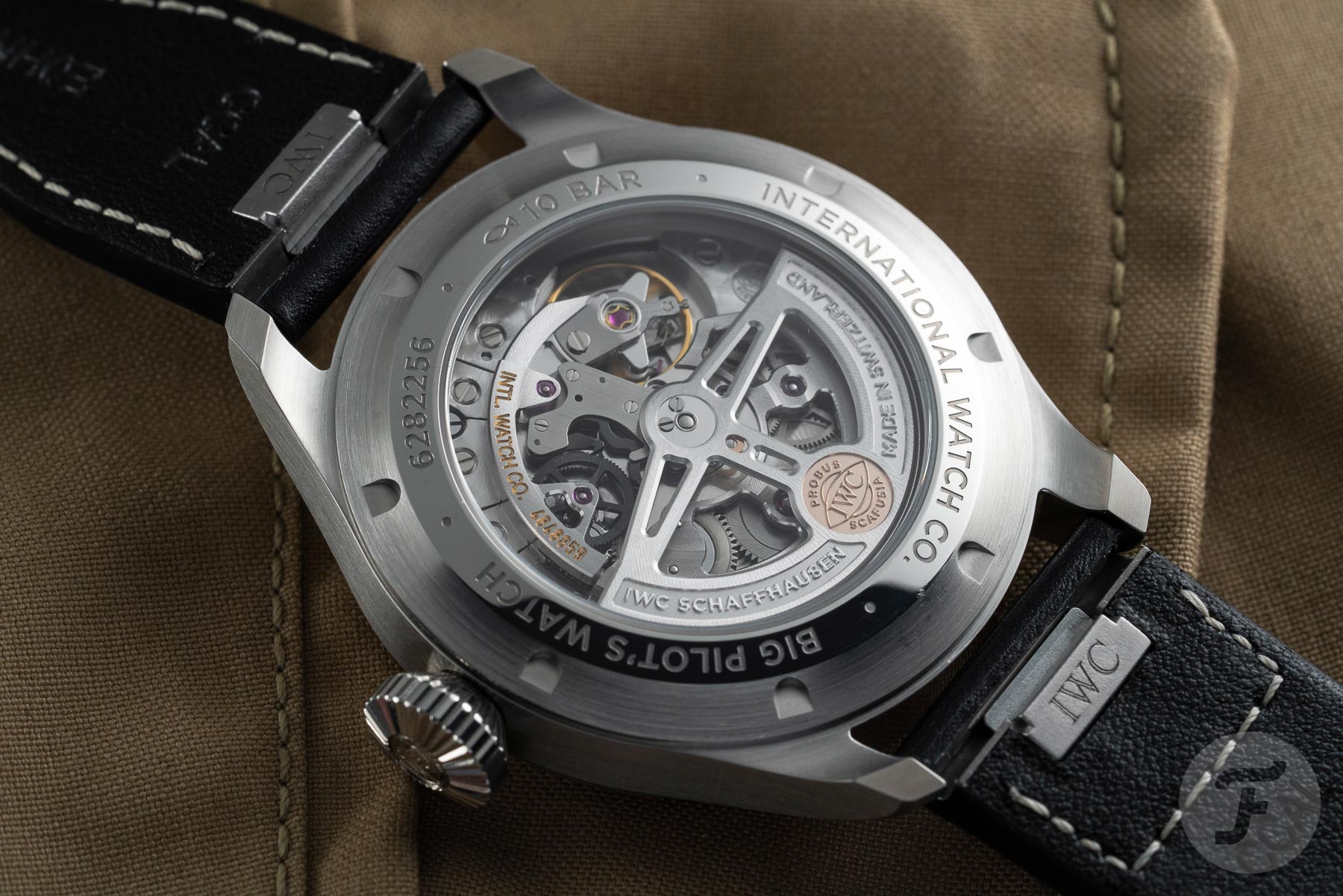 So what’s it like flying on auto with the slimmed-down IWC Big Pilot’s Watch 43? It’s effortless. Unlike the “Biggest Pilot”, this “Not Too Big Pilot” is a wear-and-forget kind of watch. The short, curved lugs keep the 43×13.6mm case comfortably on the wrist. The “BP 43” on the wrist looks bigger than it is but wears smaller. I prefer the calf leather strap with contrasting stitching and four rivets over the bracelet. That isn’t because of its looks or comfort (the bracelet has a fine adjustment system and a tapered shape for comfort and wears fantastically), but because of my sometimes hindering and unnecessary obsession with historical correctness. Can you imagine the original B-Uhr on a steel bracelet? Looks very heavy, doesn’t it? 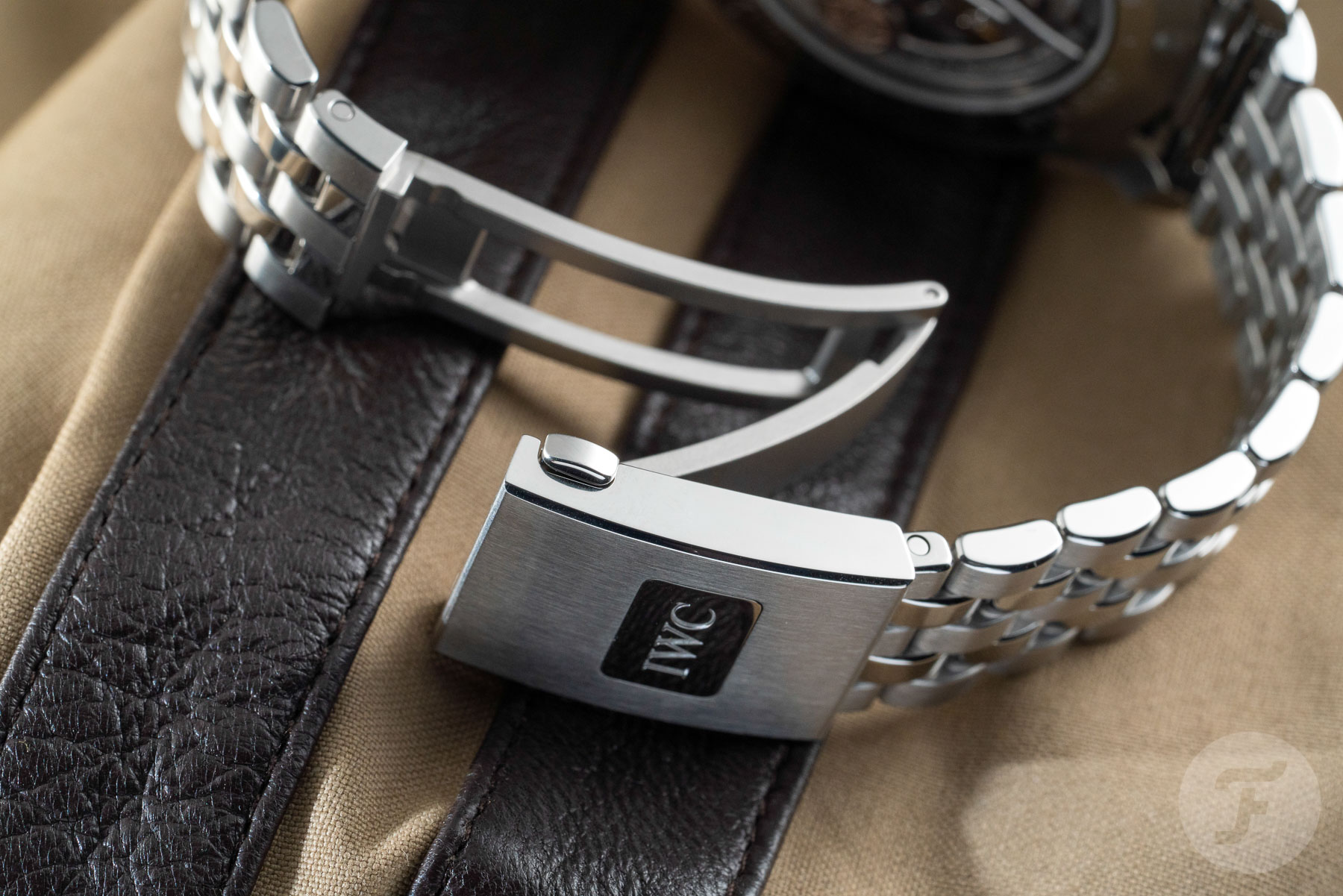 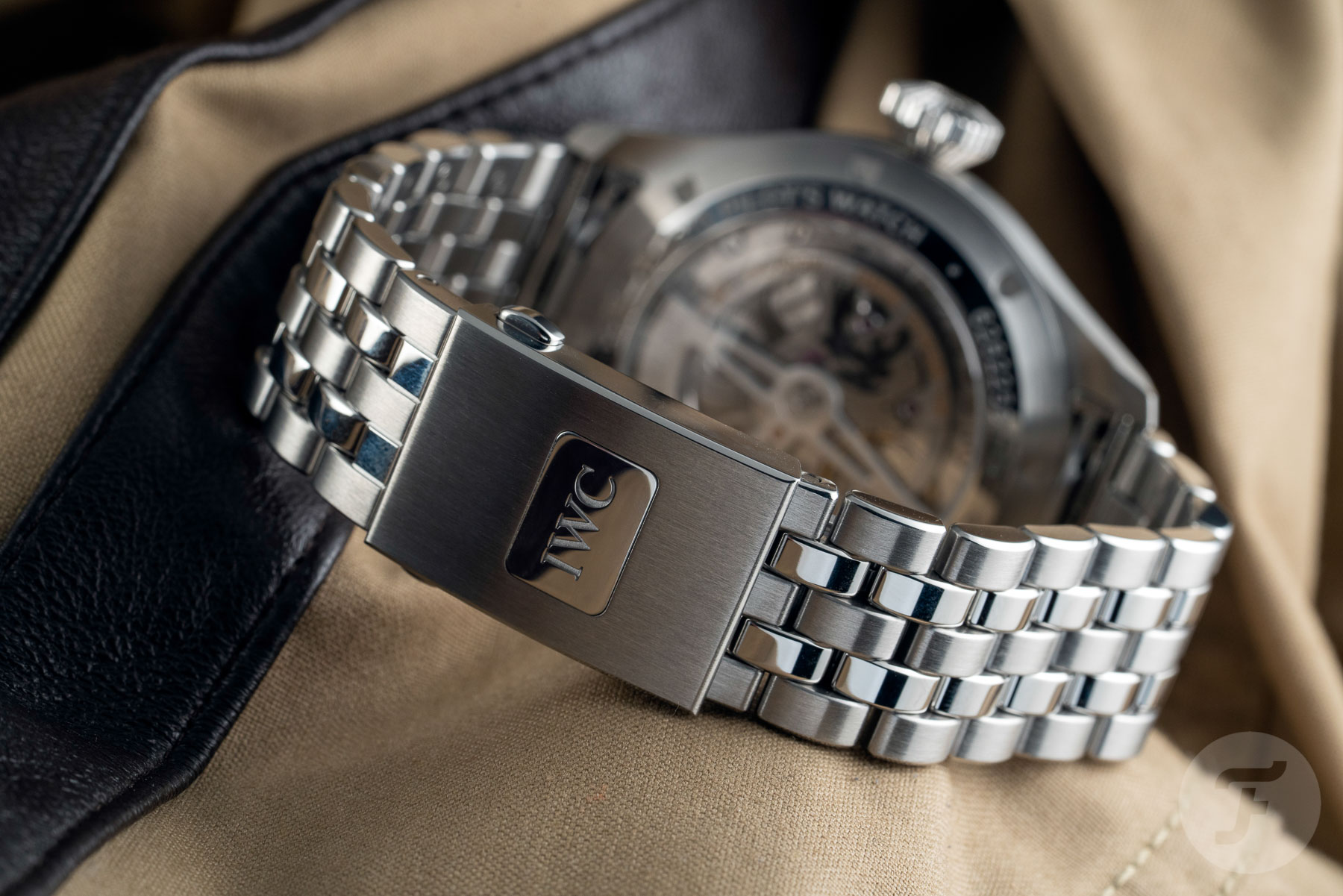 The fact that the leather strap features a luxurious folding clasp and not a traditional buckle is something I had to get used to. A pin buckle might suit the character of this tool watch better, but the average modern man/pilot/navigator demands extra luxury from IWC in the shape of a folding clasp. It took almost no time to discard my preference for a pin buckle. The folding clasp wears slim and comfortable and makes putting on and taking off the watch very easy. This is luxury working functionally. 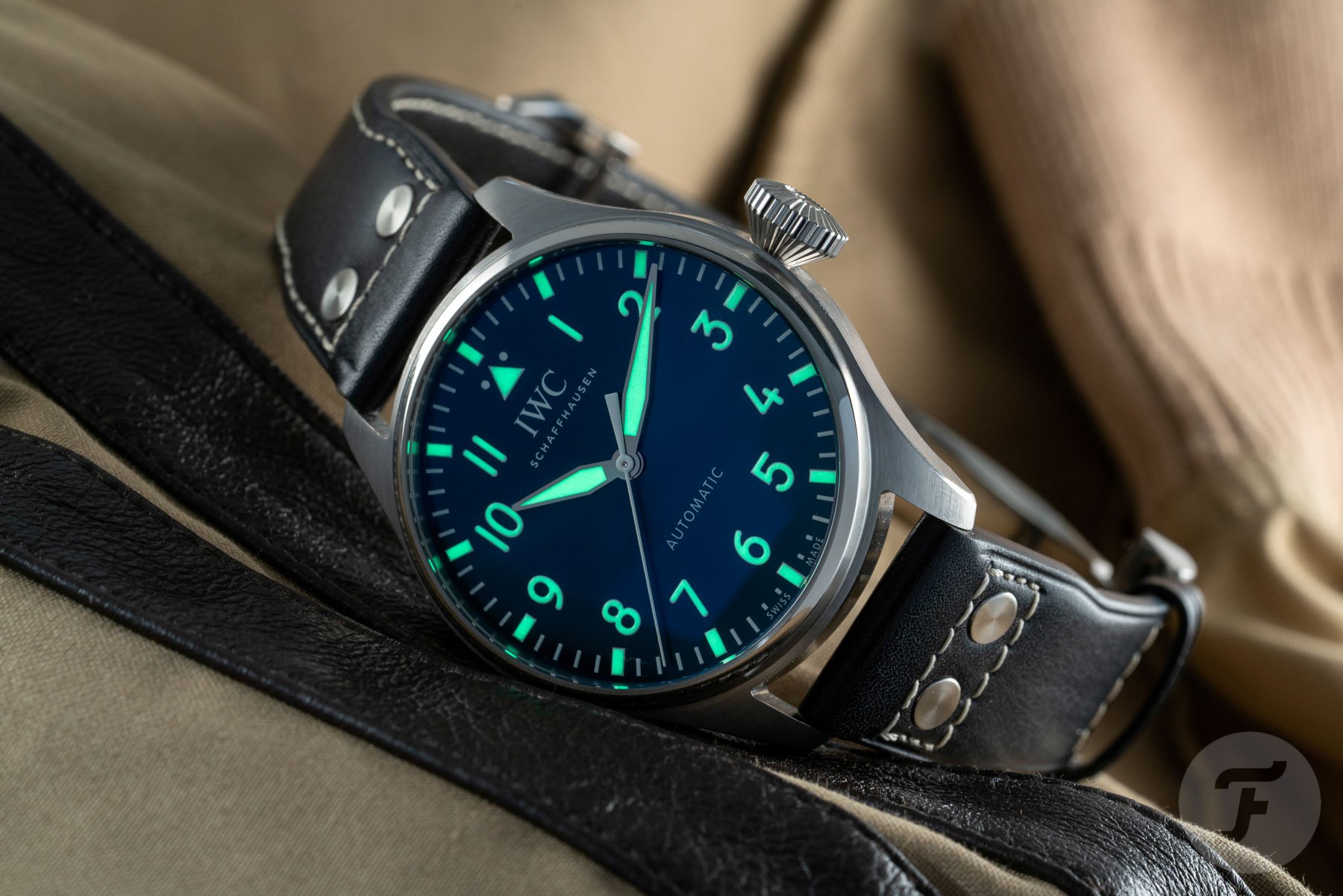 The same can be said about the dial in Le Petit Prince blue. When you quickly glance at the watch to read the time the dial under the convex sapphire glass with anti-reflective coating on both sides, acts purely instrumental. Readability is instant and effortless. But when you take a closer look the details come alive. 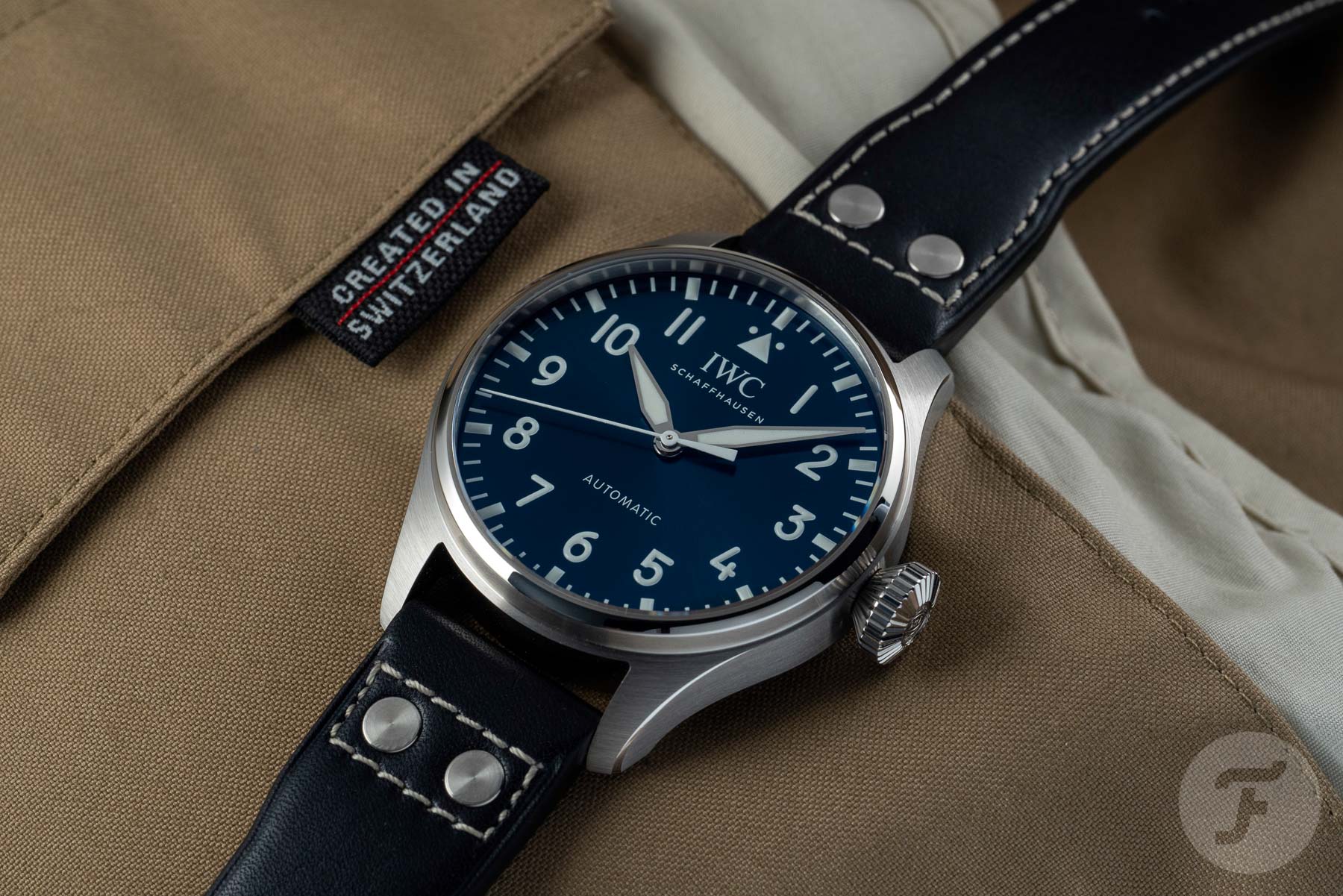 The Arabic numerals and indexes in clear white are crisp and sharp and yet have body and substance. The large, rhodium-plated hands are also more than just functional components because they not only indicate the time as precise as possible, they also have a very prominent look. The polished outline of the hour and minute hand reflects the light ever so subtly. And the metallic sheen of the dial harmoniously plays along. 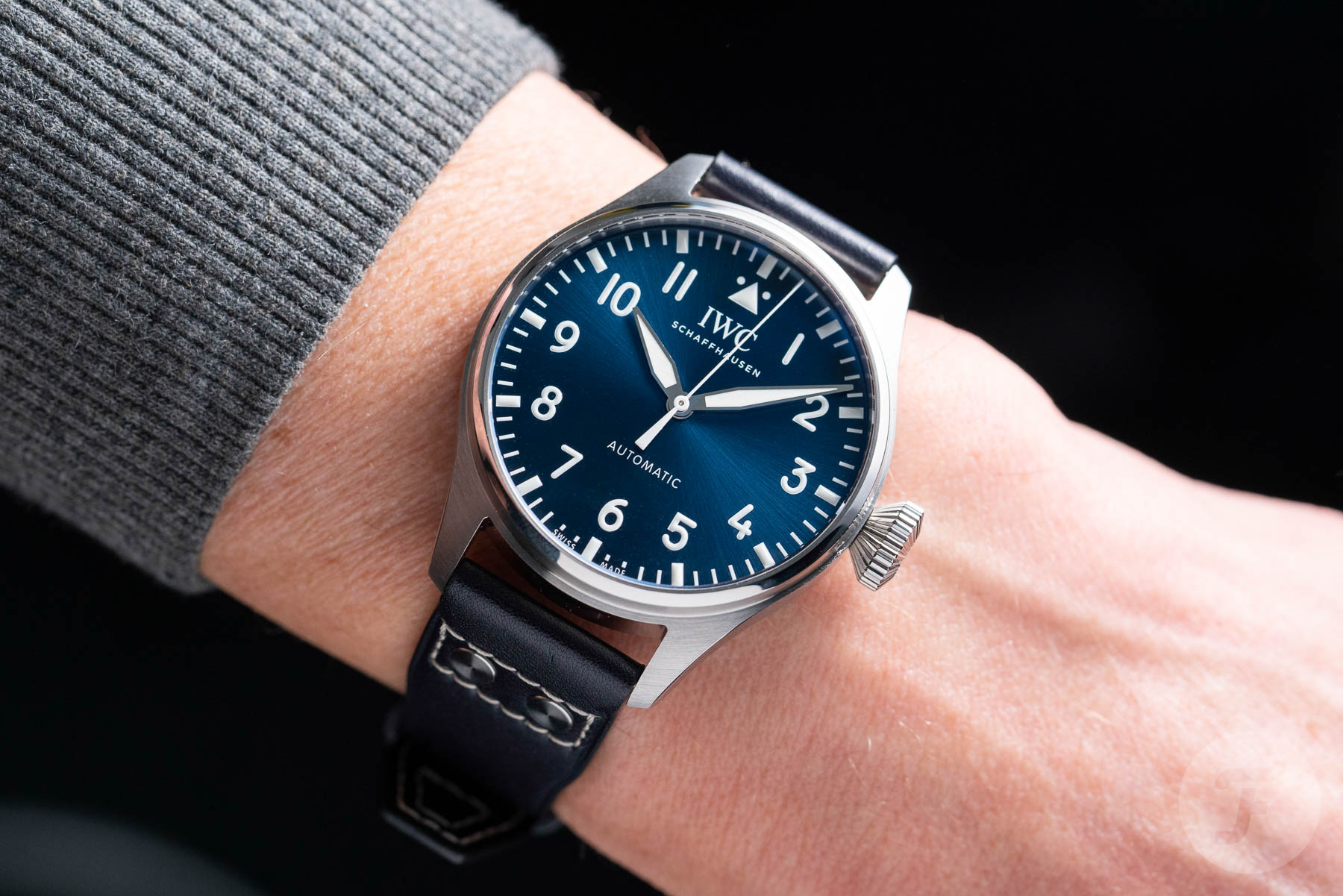 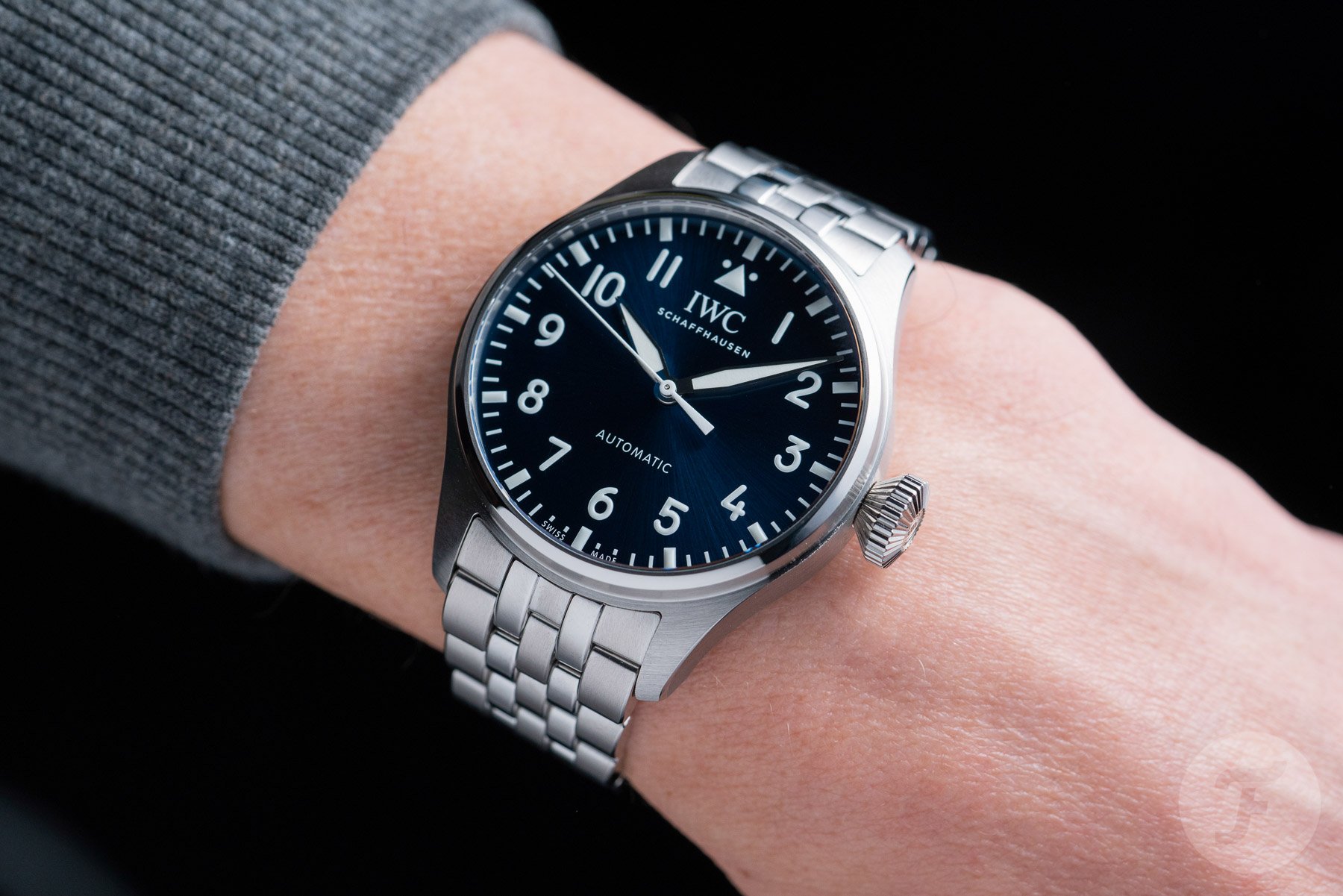 Flying on auto with the slimmed-down IWC Big Pilot’s Watch 43: take-off and landing

Flying the BP 43 is a breeze. Adjust the strap, put it on, click the clasp, and away you go. Wearing it for hours at a time is effortless. Only when you look at the wrist do you notice it’s there. But when you see it in the corner of your eye it’s also charismatic enough to immediately grab attention. And it’s a joy to look at. Also, because of the large crown with its typical shape and way it reflects light. The overall proportions are just right too and the combination of the strap and dial is mature yet sporty.

… IWC created a can-do-all interpretation of an icon …

Do I miss the date? Nope! Do I miss the power reserve indicator? Nope! The dial is perfectly balanced the way it is. It needs nothing and it lacks nothing. So, as a result, the new Big Pilot’s Watch 43, which is water-resistant up to 100 meters, is a multifunctional sports watch that pays homage to its ancient tool watch heritage. In the BP 43, IWC has sired a can-do-all interpretation of an icon that is going to be in popular demand. 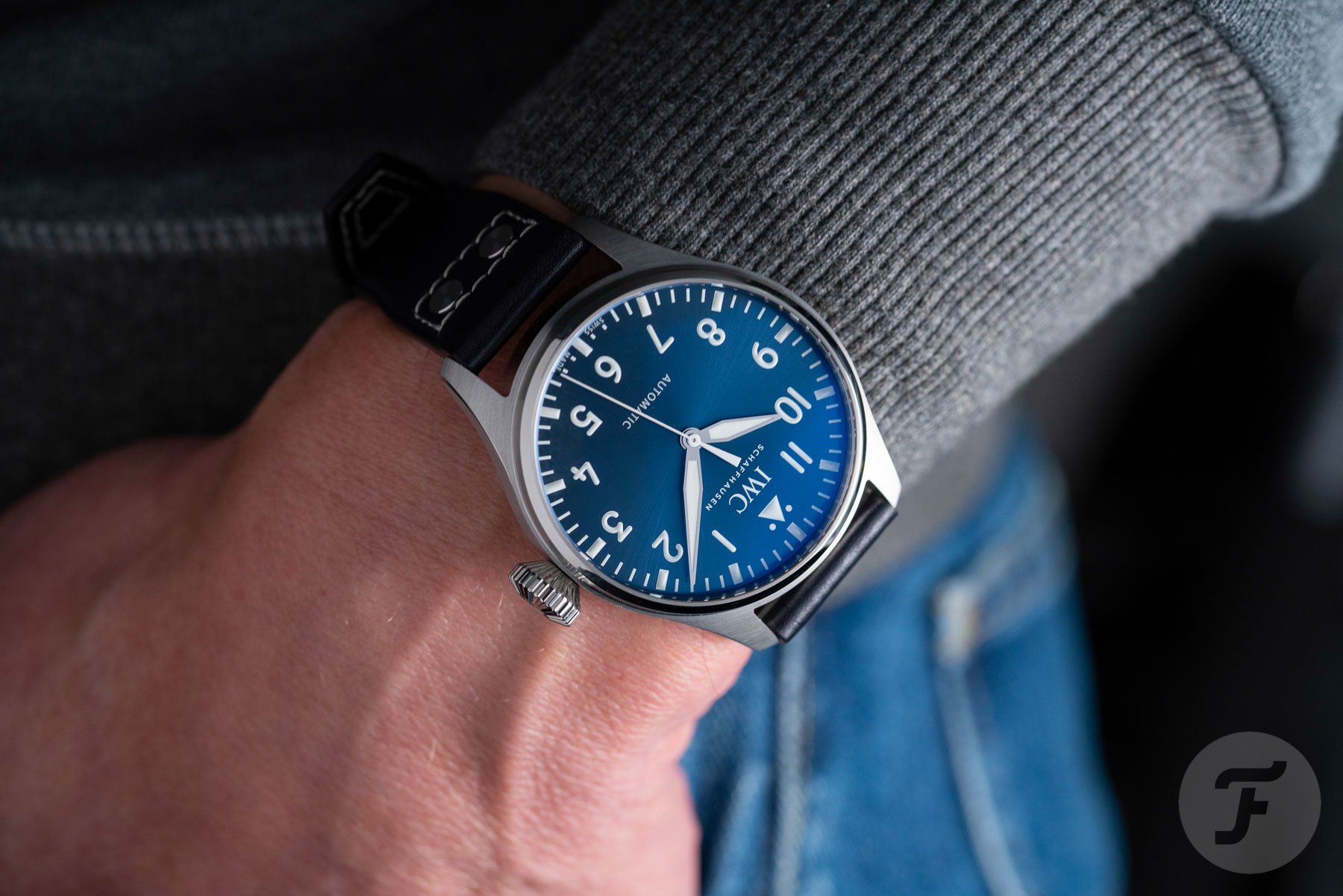 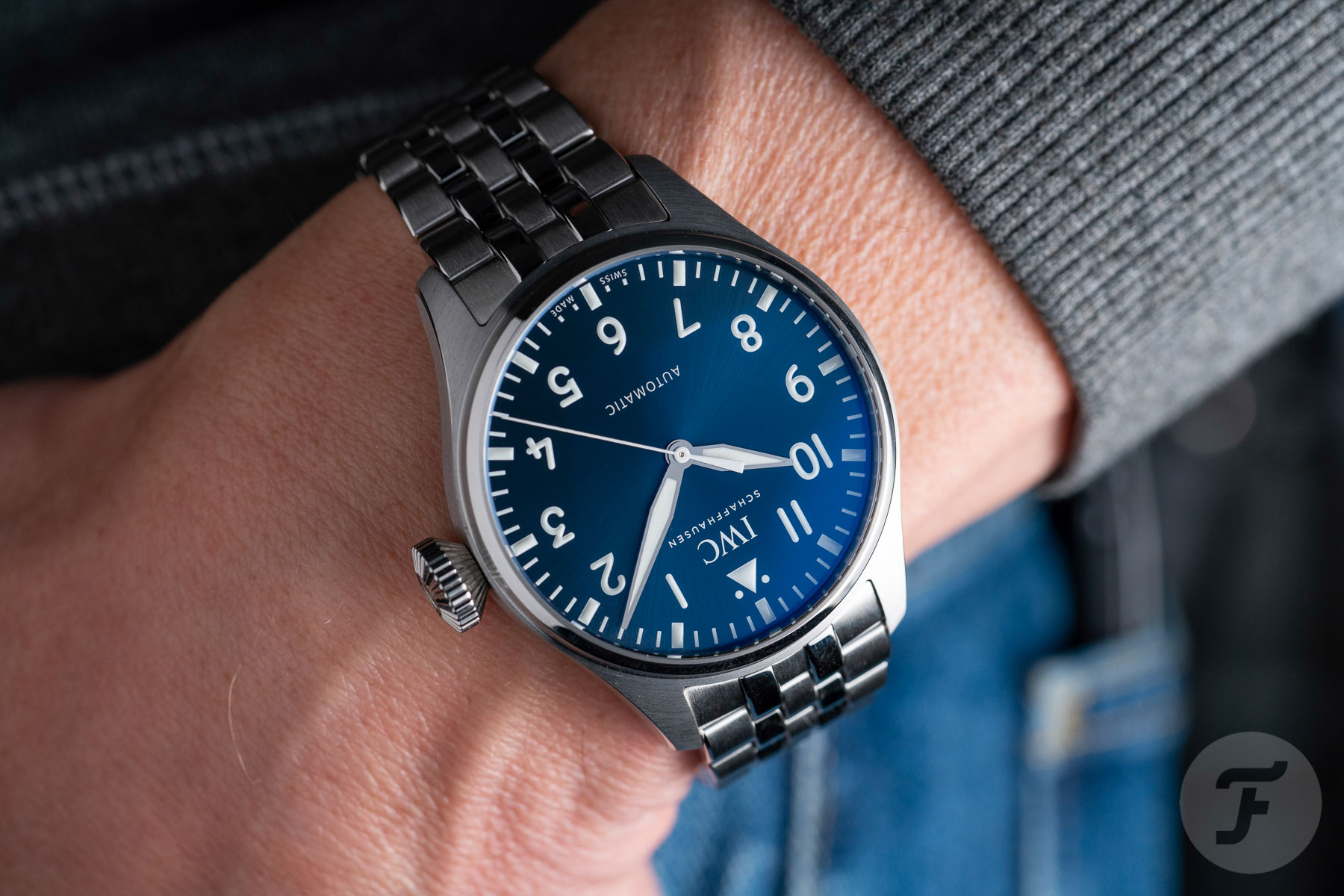