When Omega designed the Speedmaster in 1957, it was actually meant to be a sports chronograph. It was a time when there was no connection with space yet, and Omega introduced their Seamaster 300, Railmaster and Speedmaster, as watches for ‘professional’ use.

For this week’s Speedy Tuesday, we have the Speedmaster 105.012-66 Racing for you to show. 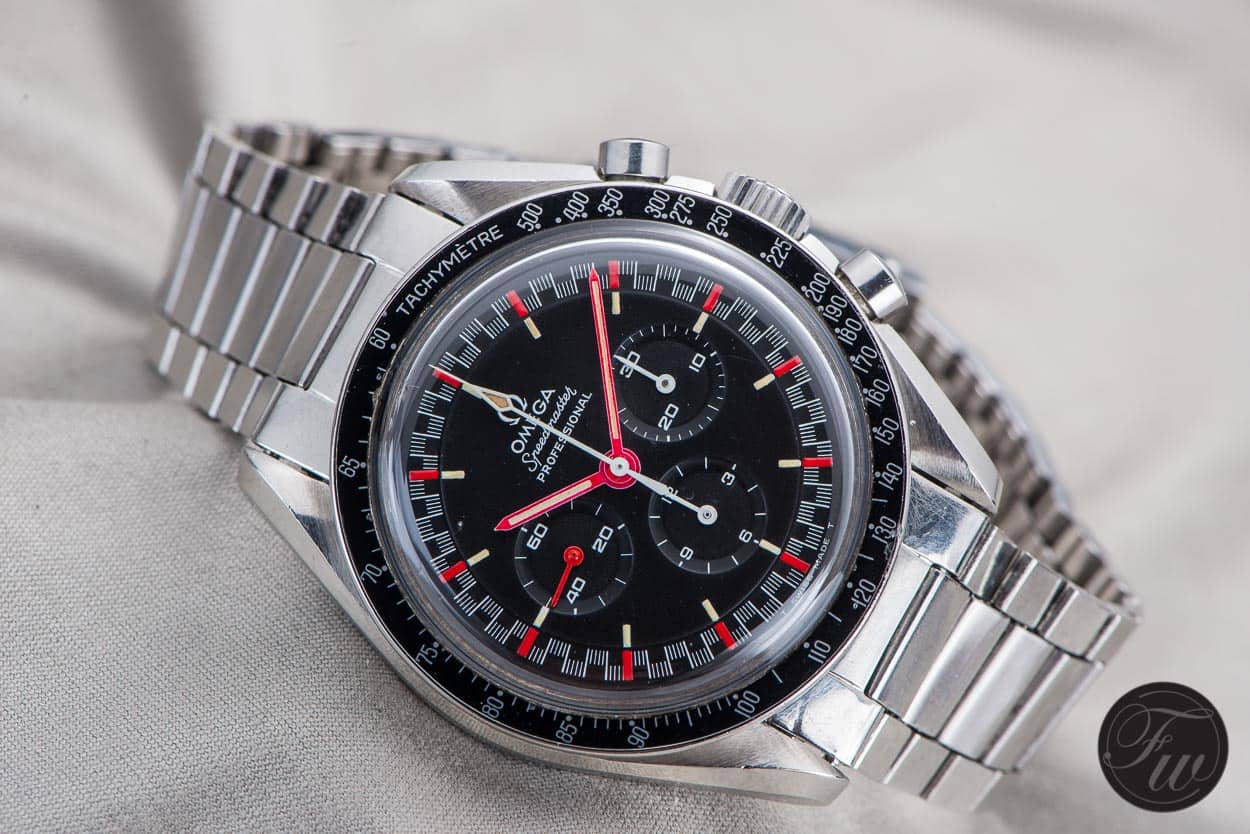 There are a lot of questions concerning the Speedmaster Racing watches. Even though there is more ‘known’ around these Racing models than, let’s say, the Ultraman models, there is not a 100% finished story on these watches. Yet.

In 1968, there is a prevalent amount of special dials that were delivered on the caliber 321 models (105.003, 105.012 and 145.012). Some times even non-Professional dials in Professional cases (with crown guards). With the end of the production of the caliber 321 movement, and these dials not properly fitting caliber 861 movements (due to the length of the feet on the backside of the dials), Omega pushed these special dials in 1968 to make room for the successor movement, caliber 861. The racing dials for the caliber 861 Speedmaster models were delivered between 1969 and 1971. 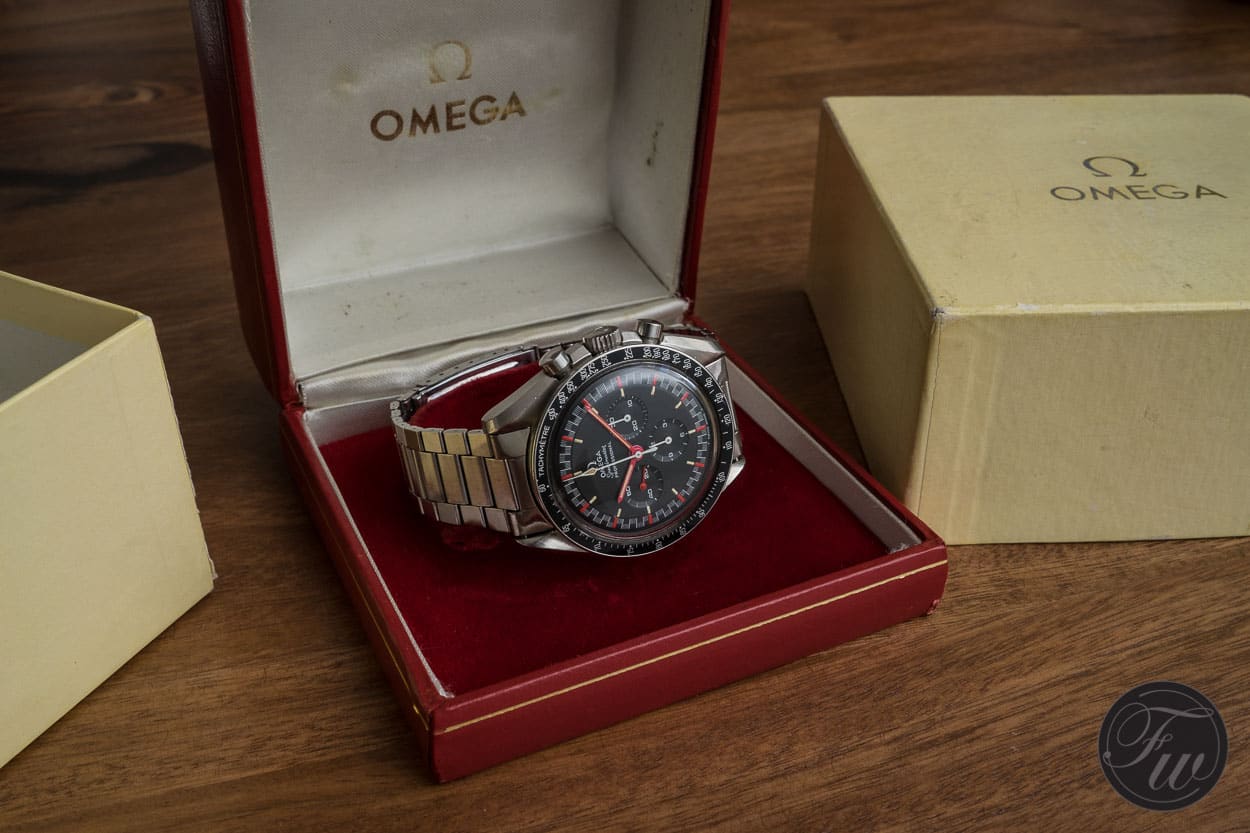 Racing – Extract of the Archives

The story of these vintage Speedmaster watches with racing dials will hopefully be completed in the future. The good thing about this particular watch, is that Omega recorded in their archives that it was delivered with this red racing dial in 1967. Personally I would only buy these types of watches (be it racing, Ultraman or radial dials) if there is some sort of provenance that they left the factory in Bienne this way. Only then a watch like this has added value to me, perhaps a few (calculated) exceptions aside. 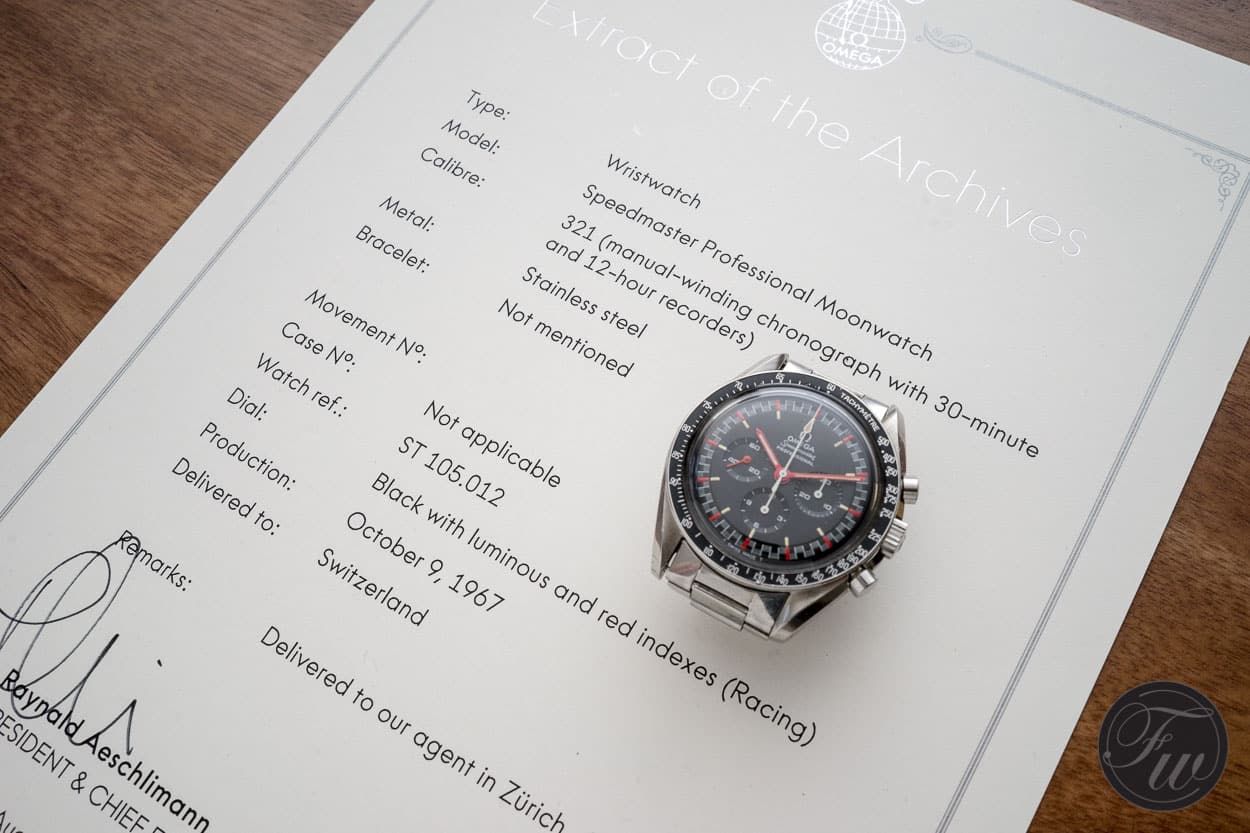 As you can see on the extract of the archives above (click here for our full story on how these Extract of the Archives are being produced), Omega provides information on the reference number (without -66 though), date of production (October 9th 1967) and the destination of the watch. Distributor A. Fischer’s Erben in Zurich, Switzerland. We made the serial number invisible on the image, of course. 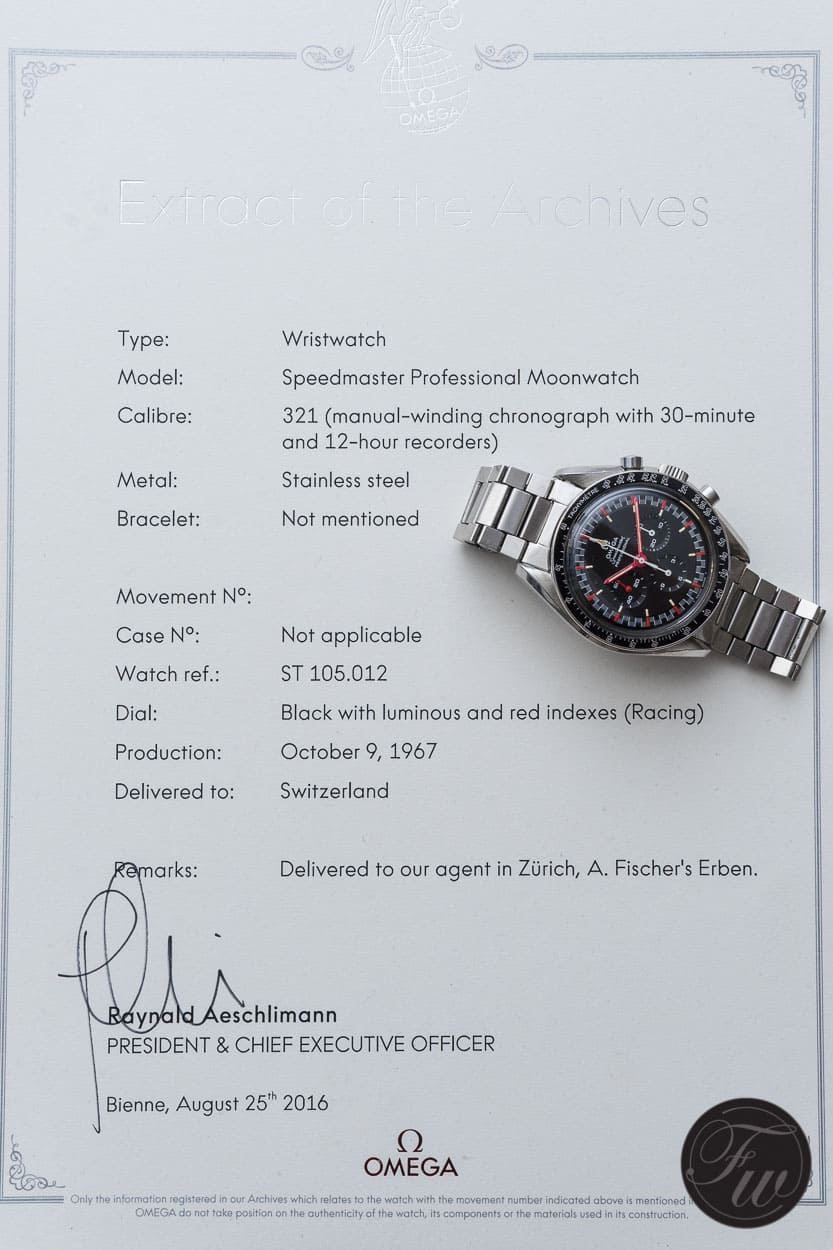 The fact that Omega shipped a watch like this to one of their distributors, make it quite certain that this racing configuration was not a prototype watch. Perhaps there were some prototypes of the racing dial models, but once they ship them to distributors in order to get sold, there can hardly be any question of a prototype watch. It might have been a special request by a customer (or distributor) though. Omega listened to these requests in the past, hence some of the limited produced Speedmasters that went to Germany, Japan and Italy or for example the ACP models. 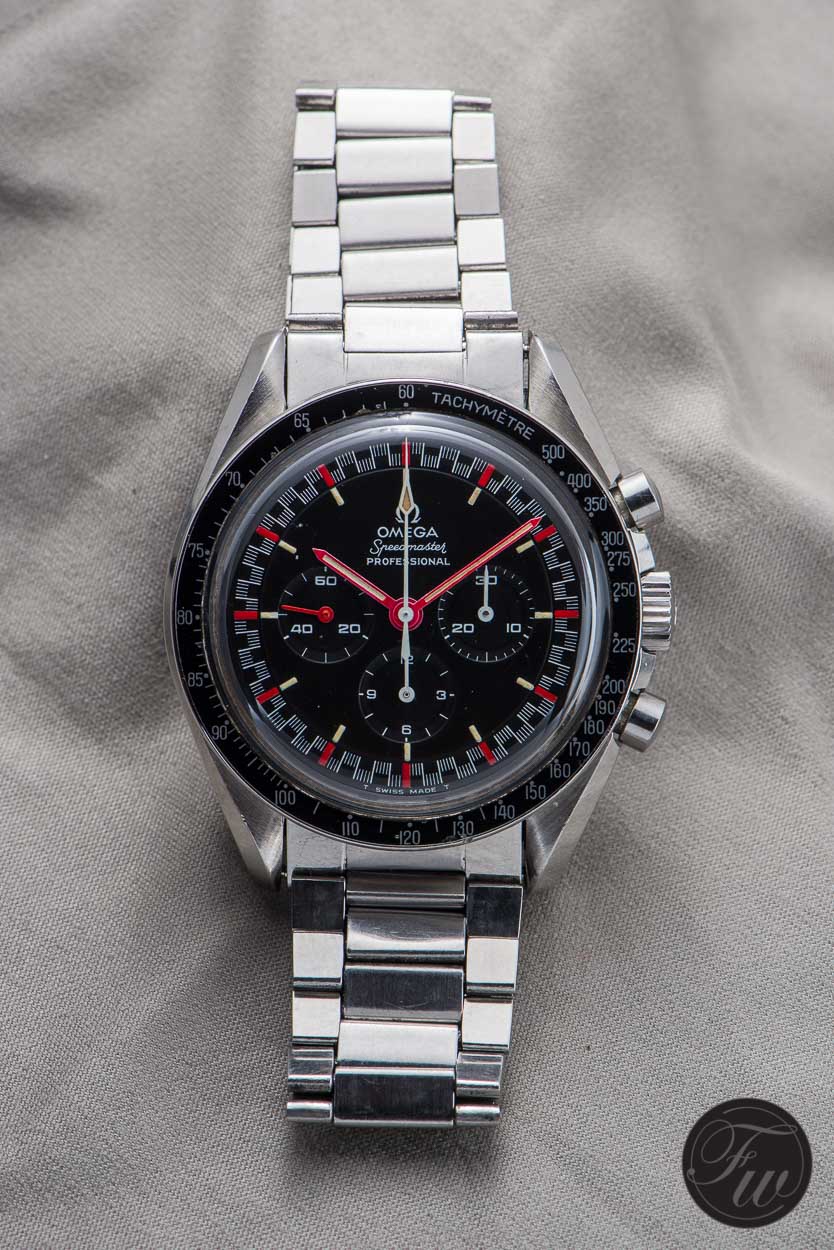 Let’s zoom in on some details of this watch. As said, the red indexes and red hands have been used on the first generation of racing dials as well, as can be seen in Moonwatch Only (105.003 and 145.012), but those have an applied logo on the dial. The second generation have the same dial lay-out, but with a printed Omega logo on the dial. You will also notice that the first generation pieces have no T’s around Swiss Made. This Speedmaster 105.012-66 Racing has “T Swiss Made T” on the dial, referring to the use of tritium. The chronograph seconds hand has the small drop at the short end, which makes it time-correct.

Another interesting detail is the size of the registers, these are smaller than the registers on regular (and later racing) dials. 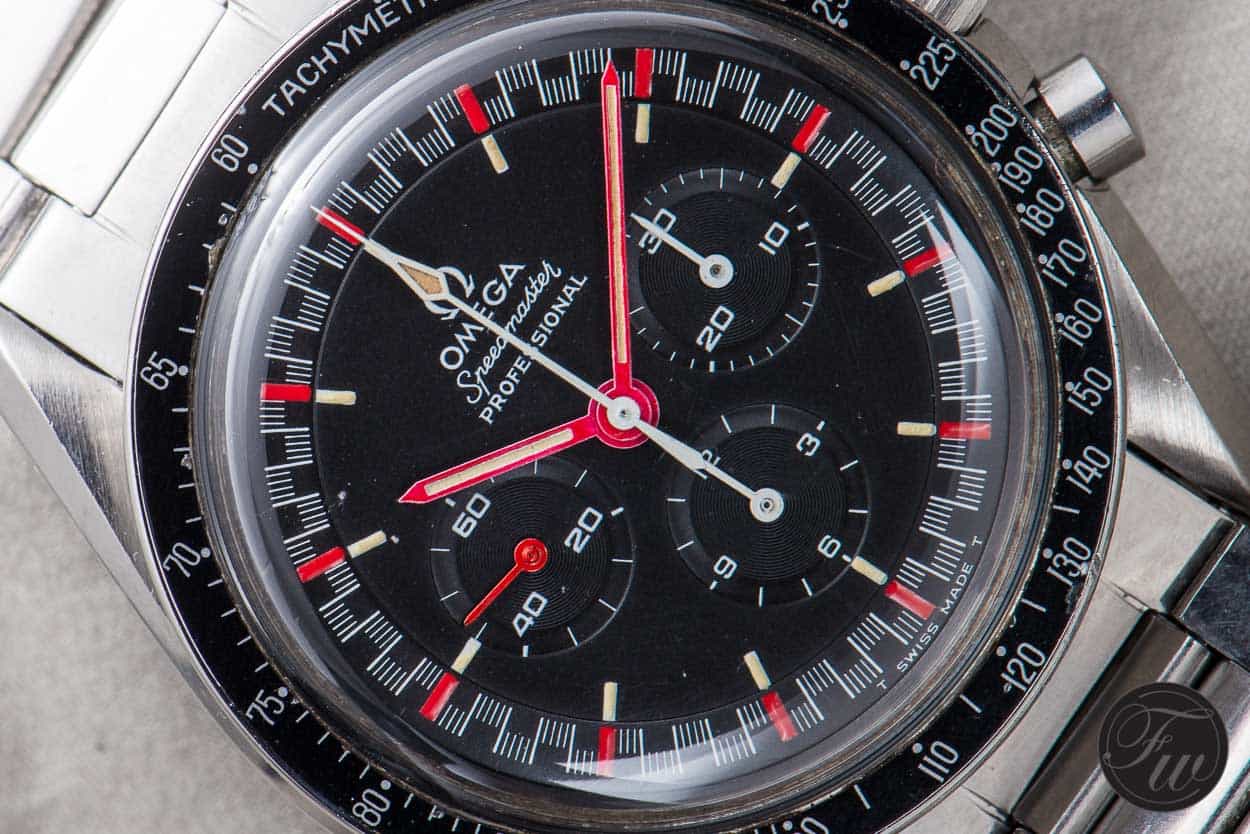 This Speedmaster 105.012-66 has a step dial, as shown on the picture. The yellow-ish hour marker stops exactly at the edge of the step-dial, to be totally red from there on till the rehaut. In between the hour markers, there is the racing flag pattern of the minute markers.

Opposite to the later Speedmaster Racing models with orange markers and hands, the chronograph hands are all-white on this Speedmaster 105.012-66 Racing. The hands that indicate time, including the small running seconds, are all red. 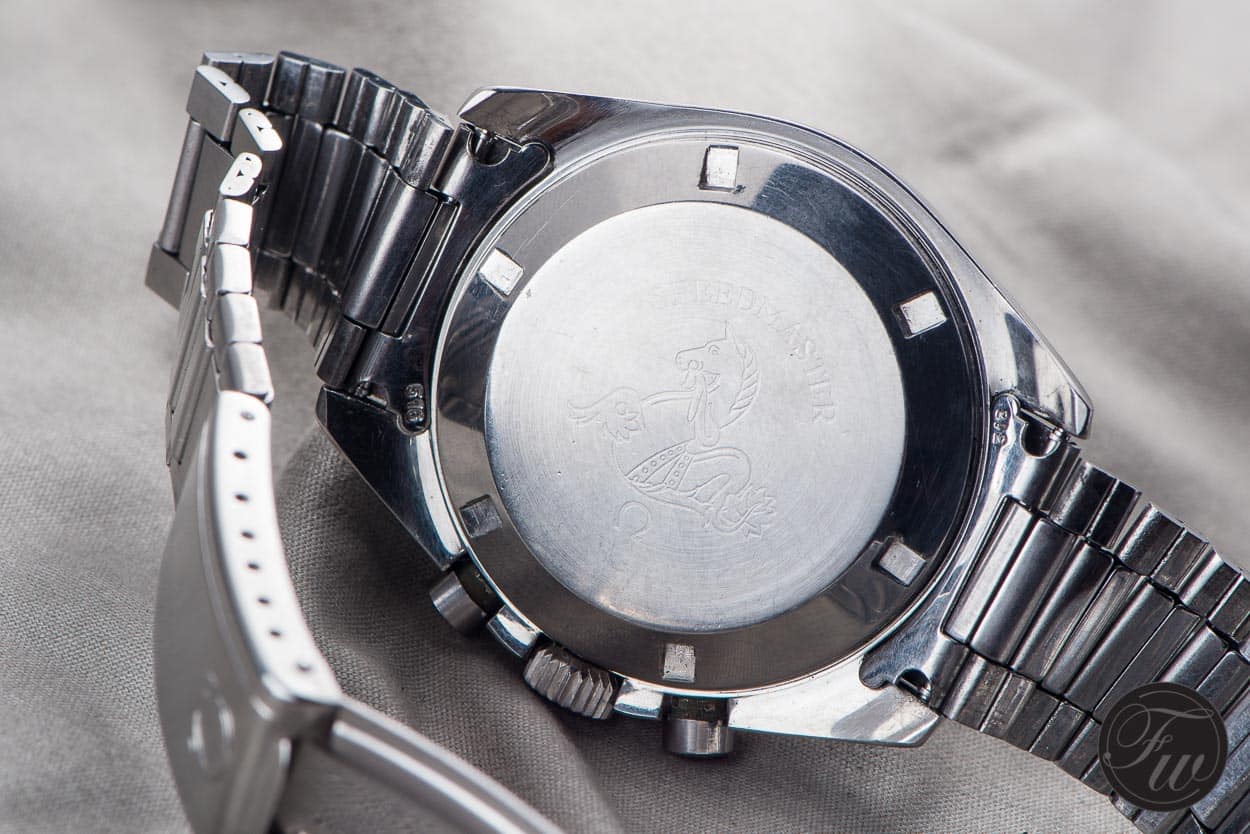 This specific watch has a time correct Dot-Over-Ninety bezel (DON or DO90) and a plain ‘Seahorse’ caseback with no NASA related engraving. The 105.012 case is produced by Huguenin Frères SA (HF). Some of the 105.012 are produced by La Centrale Boites SA (CB), normally a bit more sought-after.

I might have rubbed some people the wrong way with some of the statements about originality and traceability I’ve made. But that’s how I feel about it. This particular example of a Speedmaster racing dial has provenance by Omega, which definitely makes sense when spending so much money on these beauties. Where a lot of money is involved, people will show up that don’t have the best intentions for your wallet. It is a pity for the collector’s community, but that’s how it works. Luckily, a brand like Omega recorded some of the important things, things that matter today, and so this Speedmaster 105.012-66 Racing can be traced back to how it left the factory in 1967.

That said, this Speedmaster with racing dial is one of the nicest models I’ve ever seen in the flesh. Even though the link between the Speedmaster and the space program is stronger, the racing heritage comes to the surface some times when pieces like this pop up.

Roy and Sacha Davidoff in Geneva enabled us to take images of this watch, owned or previously owned by them.

Hot Topics
Introducing: The Omega Speedmaster Super Racing With Spirate System
165 comments
Design Vs. Specs — Which Is More Important To You When Buying A Watch?
87 comments
New Release: The Limited-Edition Seiko Prospex SLA067J1 Diver
63 comments
My Predictions For New Omega Speedmasters In 2023
58 comments
The Best Independent/Microbrand Alternatives To The Rolex Explorer In 2023
52 comments
Popular
An Overview Of All Omega Speedmaster Apollo XI Models
Robert-Jan Broer
17
(From The Archives) Shut Up & Read The Truth About Cartier Watches
George Cramer
21
10 Tips For Better Watch Photography
Bert Buijsrogge
12