Chronos magazine celebrates its 25th anniversary this year. When my interest in mechanical watches took off in the 1990’s, this was the magazine that I always bought to read and learn about watches. Needless to say that I feel proud that their editor-in-chief Rüdiger Bucher asked me to contribute with an article about 5 important Speedmasters.

The article has been translated into German, as Chronos is aimed at Germany, Austria and Switzerland. However, please find the English version in this article for today’s Speedy Tuesday feature.

Of course, opinions vary and it is difficult to select only 5 important Speedmasters, but that was the task so I picked 5 and explained my choices. 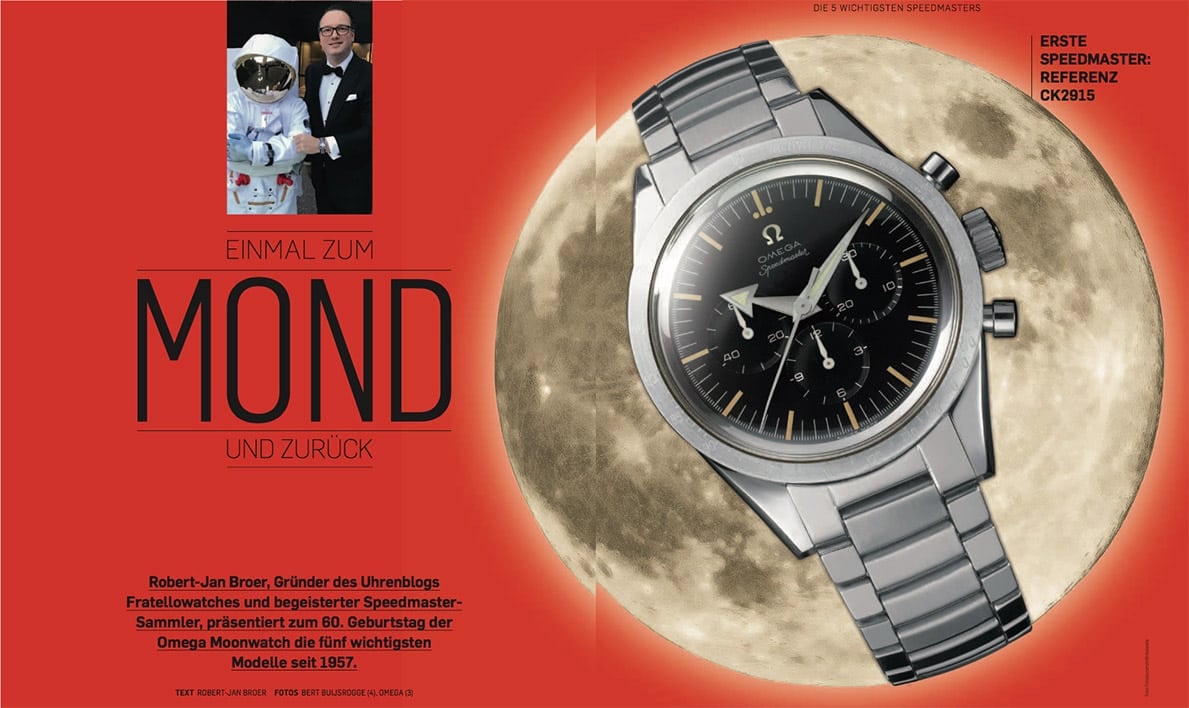 This was the very first Speedmaster reference, introduced in 1957 as a sports chronograph with a tachymeter bezel. It was only in production until 1959, when the second Speedmaster generation got introduced. The CK2915 is highly sought after and is easy to identify due to its broad arrow hands and stainless steel bezel. Only the last few produced models of this watch (with the -3 designator) have alpha hands and a black bezel, like the second generation CK2998 Speedmaster. Prices for the CK2915 skyrocketed (no pun intended) to 6 digit numbers in the last few years, which makes it almost impossible for most Speedmaster fans to obtain one. Although the CK2915 looks a bit different from the Speedmaster that was on the Moon, this is the watch that started it all. This year, to commemorate the 60th anniversary of the Speedmaster, Omega introduced a re-edition of this very exact model. 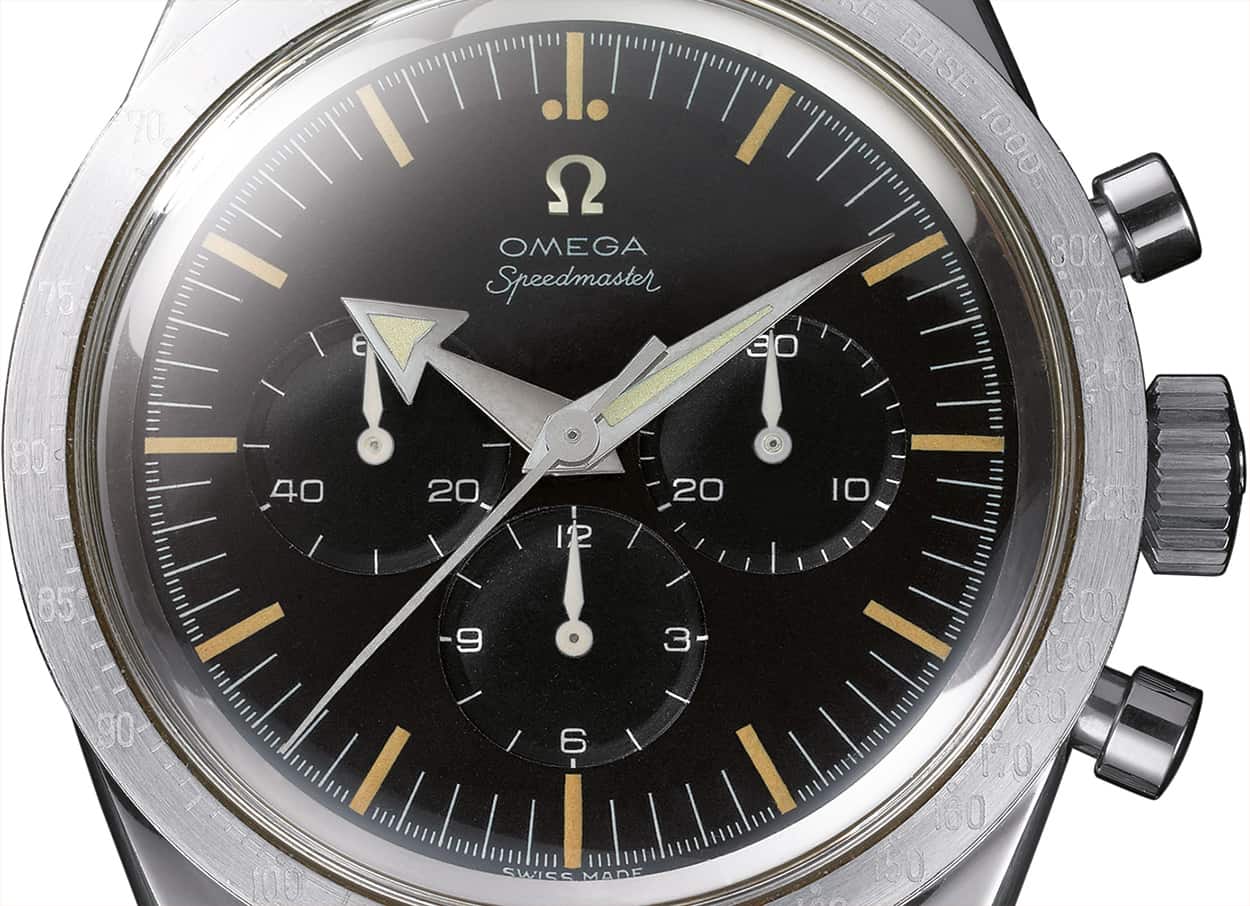 The third generation Speedmaster is the 105.003, also known as the ‘Ed White’, as he wore this Speedmaster during his Extra-Vehicular-Activity (space walk) as part of the Gemini IV mission. It was also the first Speedmaster with white baton hands, as the previous generations had broad arrow and alpha hands. Not only that, but the Speedmaster 105.003 was also the watch that Omega sent to NASA as a response to their procurement request. The Speedmaster 105.003 was the references that was tested to the extreme by NASA and the only watch of the lot that survived all tests. It was qualified by NASA for all manned space flights and would later result in the Speedmaster becoming the ‘Moonwatch’. The reference 105.003 has also been used by astronauts during Apollo flights, although the official watch were the later references 105.012 and 145.012. The reference 105.003 “Ed White” is sought after, as it is the last Speedmaster without crown-guards. 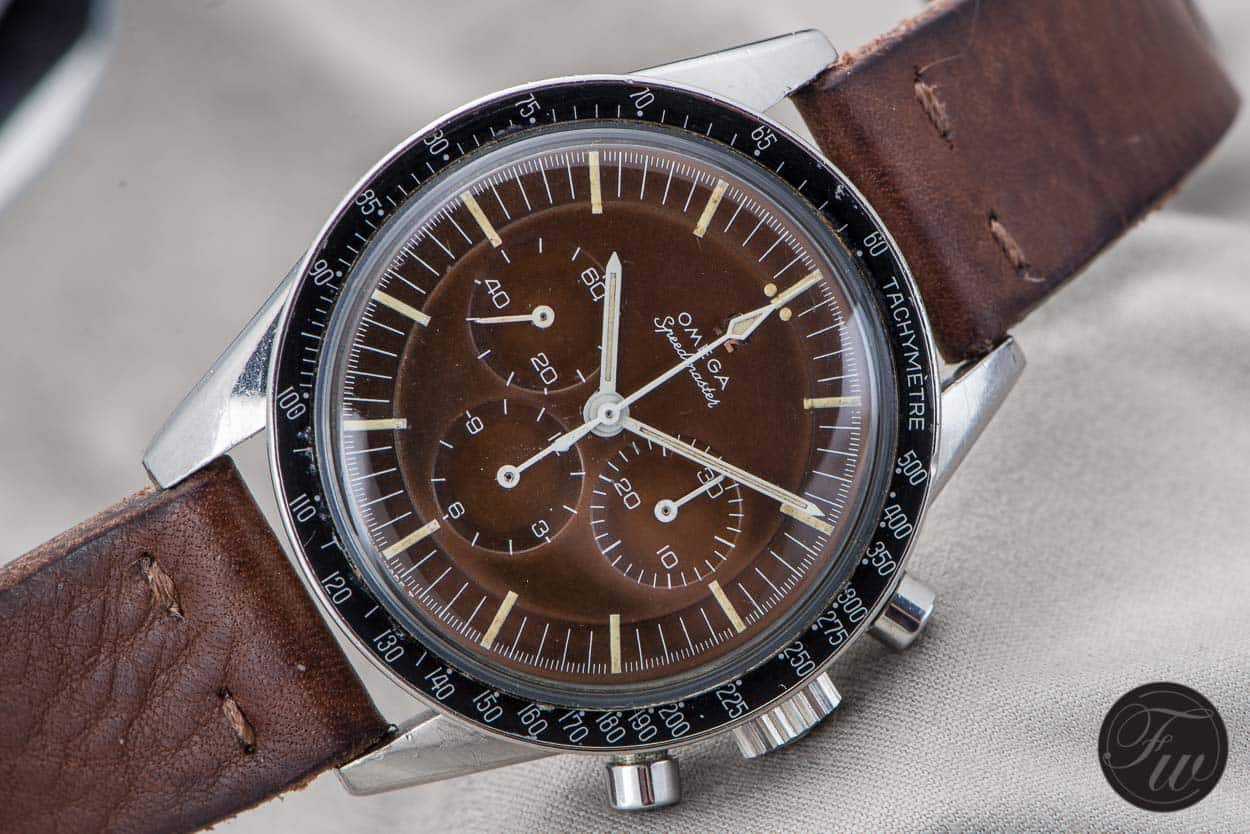 The 4th generation of Speedmasters and the first to have the ‘Professional’ wording on the dial. They also were updated with crown-guards to protect the pushers and crown. The 105.012 and 145.012 reference Speedmasters were the ones that Omega supplied to NASA for the Apollo program. Astronaut Edwin ‘Buzz’ Aldrin was the first to wear the Speedmaster on the Moon, which was the reference 105.012. There are no big differences between the 105.012 and 145.012 (the latter has improved pushers), yet the prices are higher of the 105.12 as it was the first on the Moon. The 145.012 was the last reference with the Lemania-based column-wheel calibre 321 movement, that was replaced by a shuttle cam chronograph (calibre 861) in 1968 when Omega introduced the Speedmaster 145.022. Collectors are after these 105.012/145.012 models not only because they are very significant to the Speedmaster & Moon history, they are also the models that are ‘best affordable’ with the calibre 321 movement. These are the real Moonwatch models. See our 145.012 buyer’s guide here. 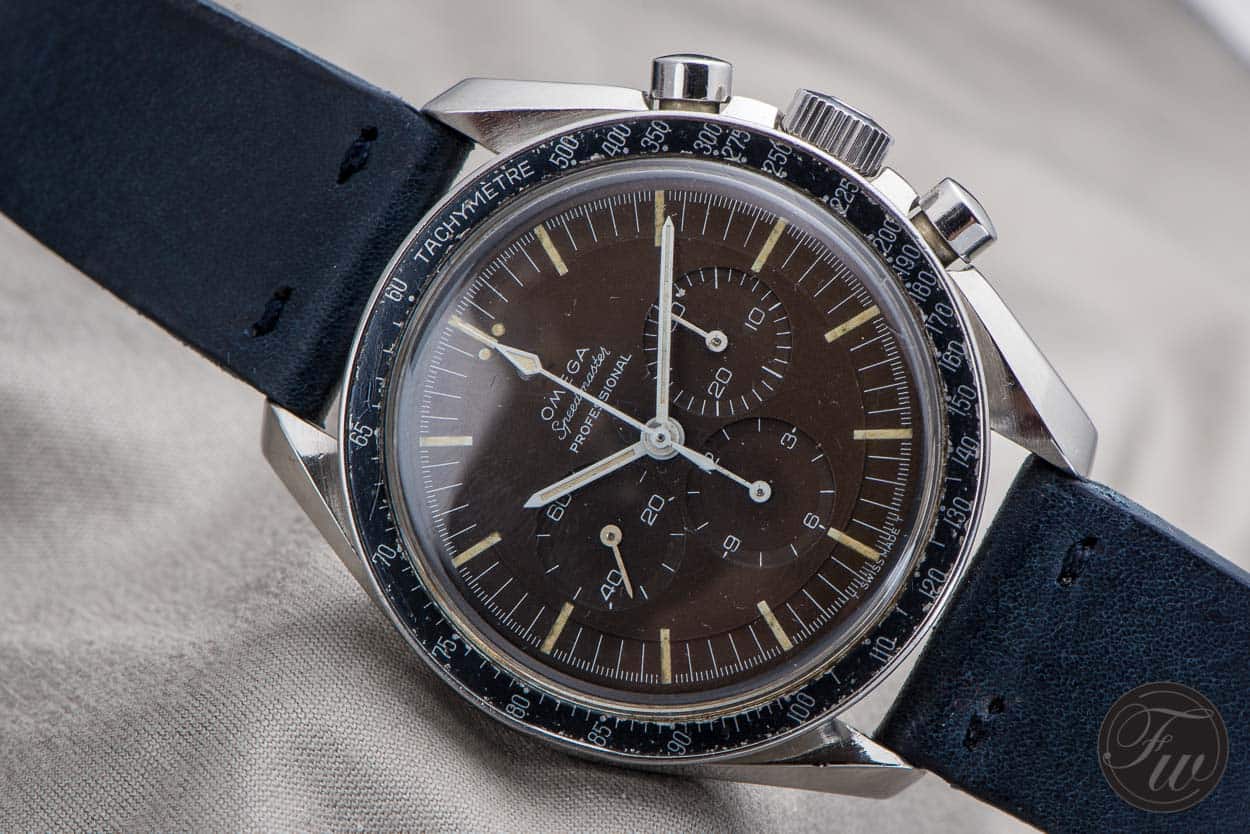 Introduced in 1968 with a number of changes. The watch received the calibre 861 movement, which has a shuttle cam chronograph mechanism instead of a column-wheel. It also had a higher ticking number (21.600vph vs 18.000vph) for a higher precision. The dial received a printed Omega logo instead of an applied one and the chronograph seconds hand changed a bit (straight tail). This reference has been in production from 1968 until the early 1980s, yet you will find slight differences in the watches produced in this time frame. This reference also received the engraved case back with “First watch worn on the Moon”, that was used in several different versions. Although the 145.022 was never used on the Moon (but was in space, used by astronaut Ron Evans for some test work), it was the watch that was re-qualified in 1978 for the Space Shuttle program by NASA.  Omega sent 56 of these watches (code name Alaska Project III) with slightly different dials (radial sub dials) to NASA for use on board of the Space Shuttle. See our 145.022 buyer’s guide here. 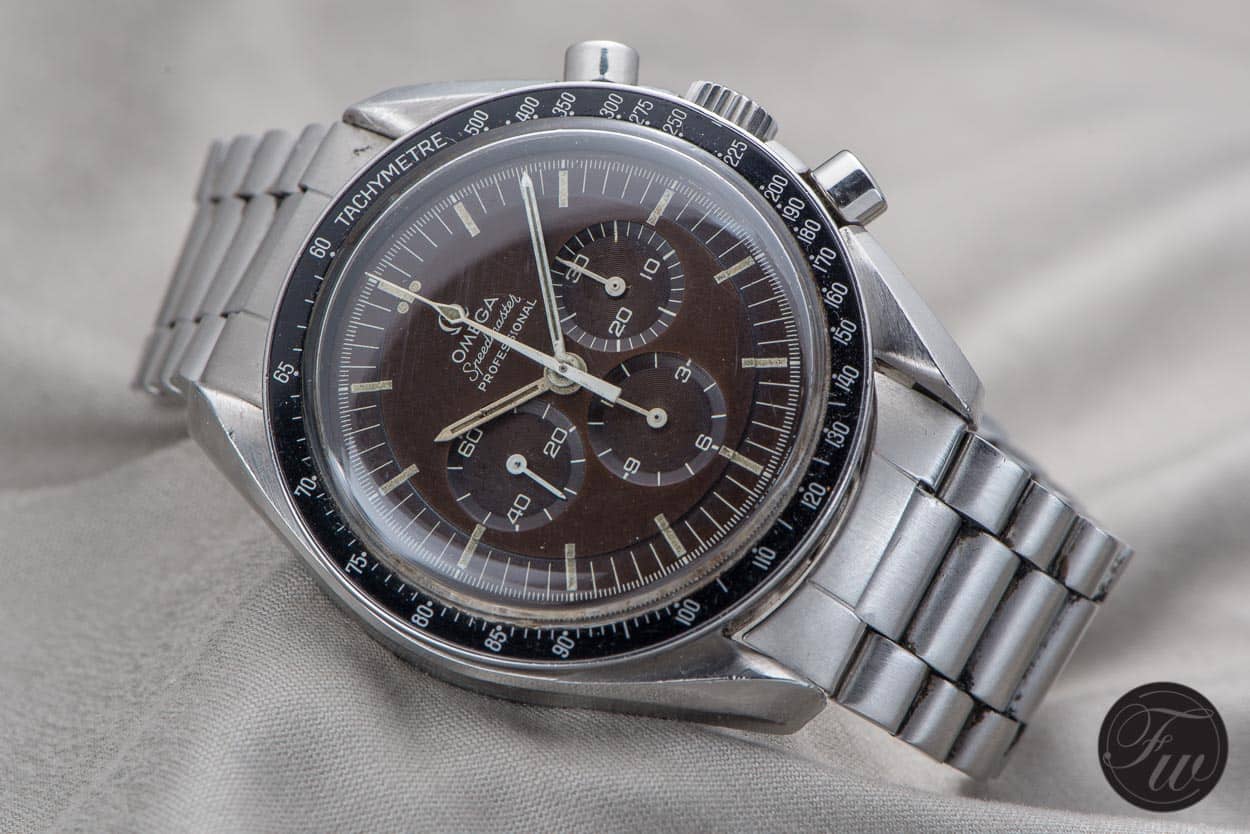 It might sound odd that I put the current Speedmaster Professional ‘Moonwatch’ in this list of 5 important Speedmasters, but this watch is the modern version of the real Moonwatch models (105.012/145.012). It uses the same case design (42mm), Hesalite (plexi) crystal and the dial comes very close to the earlier Speedmaster Professional models. The movement is calibre 1861, the successor of the calibre 861 with only minor changes. If people are not into buying vintage watches, or feel insecure in doing so or for whatever other reason, this is the Speedmaster to buy if you want the most historic model from the Omega Speedmaster collection. You could say that this watch is a direct descendent of the first Speedmaster, especially that of the first Speedmaster Professional with very similar specifications. A watch that has never been out of production and you can wonder what happened to Omega if this had been the case. It inspired the design of many other Speedmaster variations, such as the later Speedmaster ‘Reduced’ series or the current Dark Side of the Moon collection. 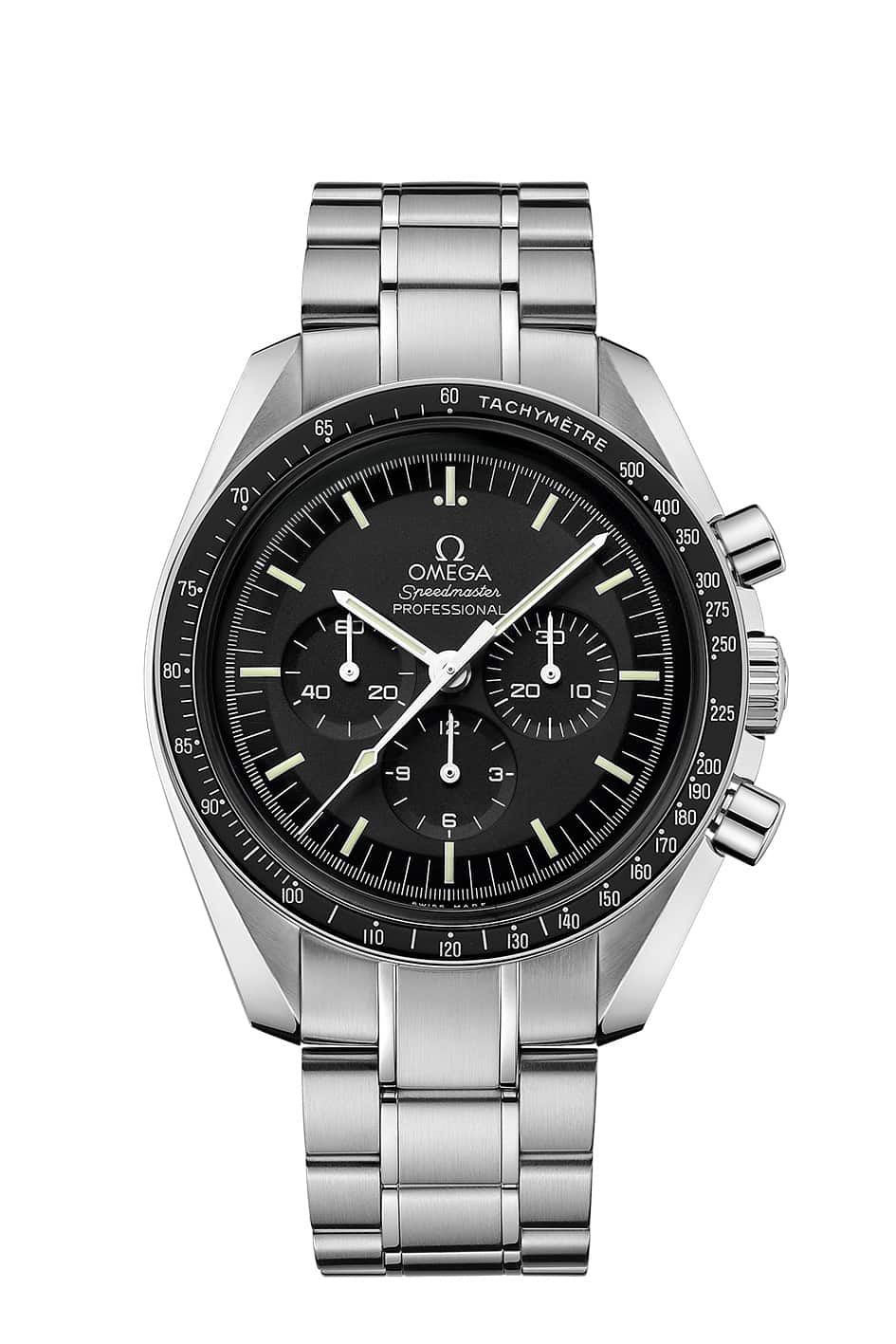 You can order the 25th anniversary Chronos Magazine edition here. 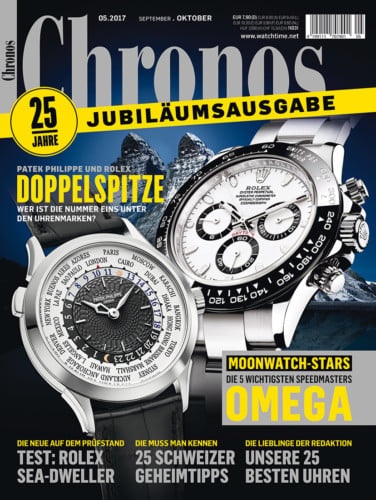