I am by no means a fan of watch brands using certain ambassadors to endorse their watches and did a thorough and much-read article on that about a year ago (here). However, I also get the fact that watches need to be sold and that some customers actually like to be associated with a movie star or athlete by wearing a watch from the same brand, or even the same watch perhaps.

What I do like, is when people (famous or less famous) are wearing a watch for the right reason, that they bought it because they love it. A few months ago, I watched a documentary on television about (comics writer and cartoonist) Martin Lodewijk, author of the Agent 327 comic. 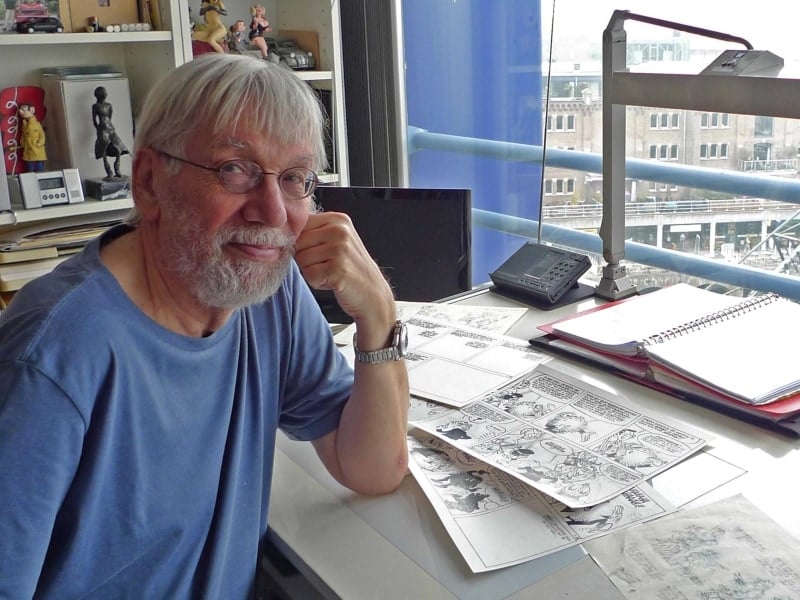 Martin Lodewijk in his studio in Rotterdam, sporting the Omega Speedmaster Professional.

Agent 327 is a secret agent and loosely based on Ian Fleming’s character, but – like Martin Lodewijk – he is located in Rotterdam and manages to get himself into weird situations. The first Agent 327 cartoon appeared in a copy of Pep (comics magazine) in 1966, but appeared as a separate comic album from 1970 till the last edition, released in 2015, with a (long) pause between 1983 and 2000. Agent 327 is often accompanied by the Swiss Olga Lawina, who can be seen on the cover images below.

In the documentary on Martin Lodewijk and his Agent 327, I noticed that he was wearing an Omega Speedmaster Professional ‘Moonwatch’. The film showed him at his drawing board, where you could clearly identify his watch as a ‘Moonwatch’. A few stills later, I was quite certain that it concerns a Speedmaster Professional 145.022-69, produced somewhere between 1969 and 1971. This is based on the dial (printed logo), bezel and the reference 1039 bracelet (produced till 1971). An earlier reference would be the 145.022-68 but that is with the applied Omega logo and a later reference would be 145.022-71 but to my best knowledge that would have been delivered on a 1171 bracelet. However, it is of course possible. 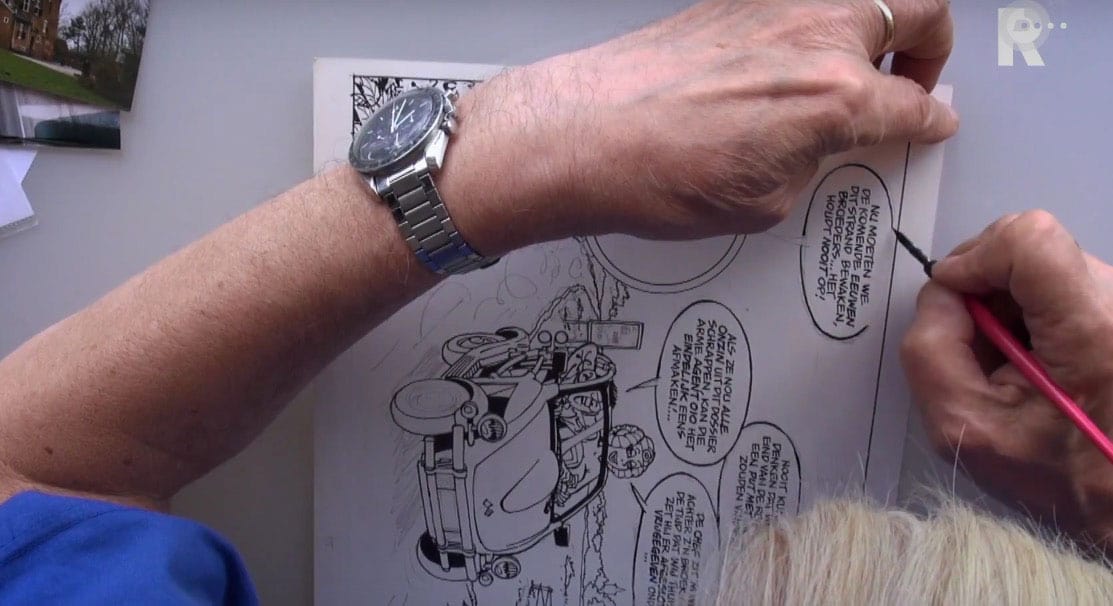 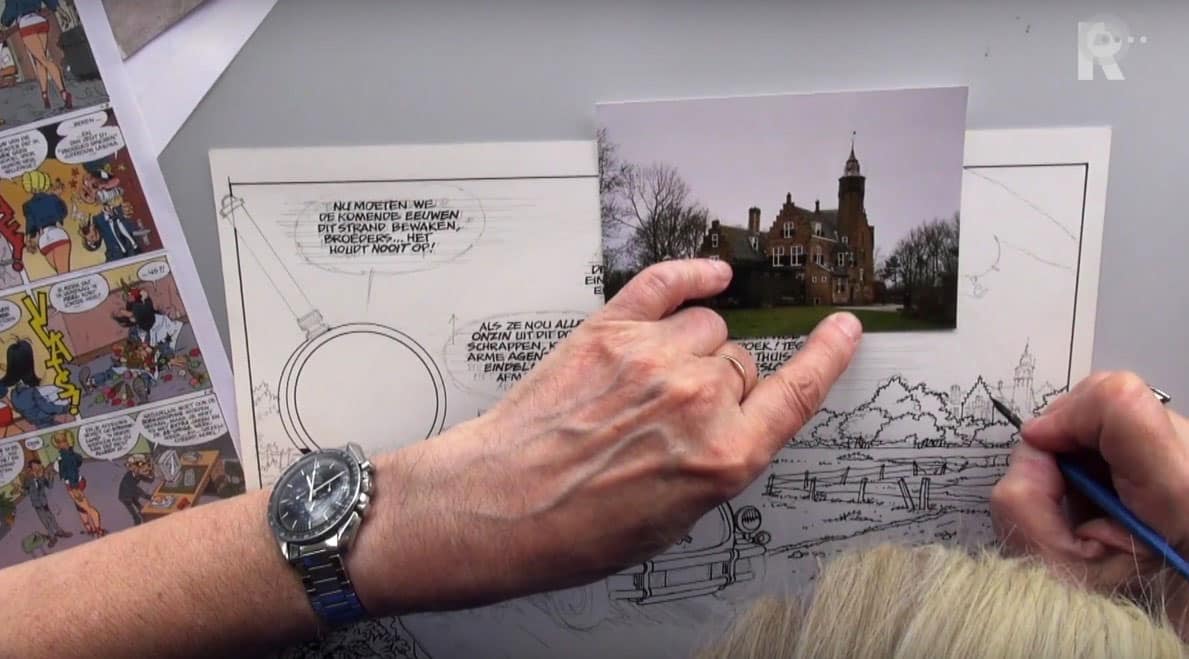 Another still of Martin Lodewijk at the drawing board

The documentary mainly focused on Martin Lodewijk (76 years old) completing his last album (De Daddy Vinci Code) and the struggles he encountered doing this (writers block, his hands and fingers that didn’t cooperate that well and ‘sand between his ears’). Being a fan of comics and cartoons, I watched the documentary with great interest and – of course – enjoyed the moments where Martin Lodewijk’s Speedmaster was clearly shown. The Agent 327 albums are in Dutch and so is the interview, but in case you are Dutch, Flemish or somehow capable of understanding Dutch language, I urge you to watch this documentary done by RTV Rijnmond (click here). 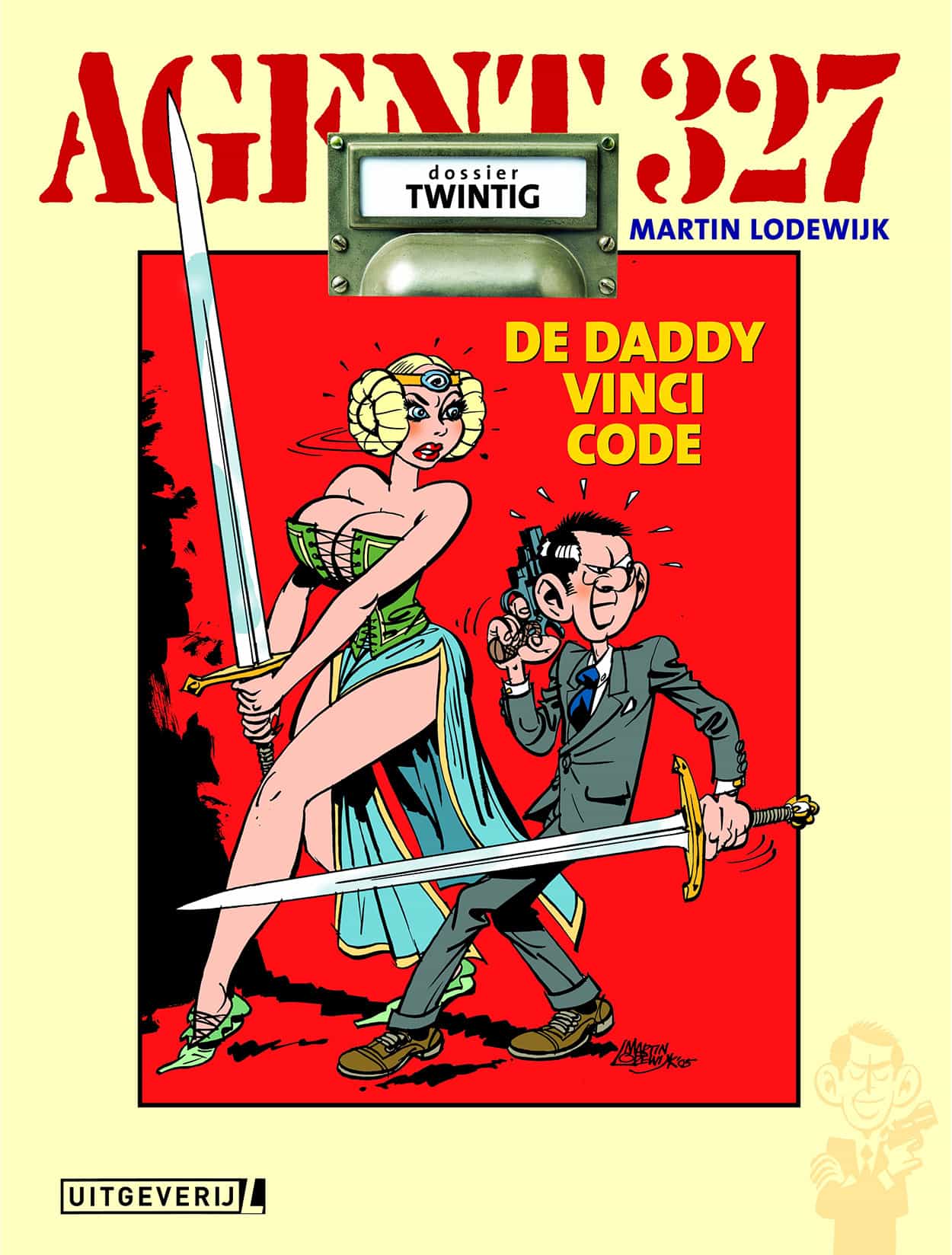 One interesting comment from Martin Lodewijk in the documentary is what should happen to Agent 327 in the future when he is not capable anymore of doing the job. He refers to the strict policy that Hergé’s owners have about the use of Tintin. By even pointing at Tintin you can get sued, he says. This corresponds with my experience with them, when writing about the Speedmaster Professional ‘Tintin’ timepiece (here). They threatened to sue me when I even would use the name ‘Tintin’ in an article, that is just plain crazy. The letter of Moulinsart (the legal organization who protects the Tintin heritage) is available upon request. Perhaps a nice collectible addition for those who’ve bought the – now discontinued – Speedmaster Pro ‘Tintin’ watch. 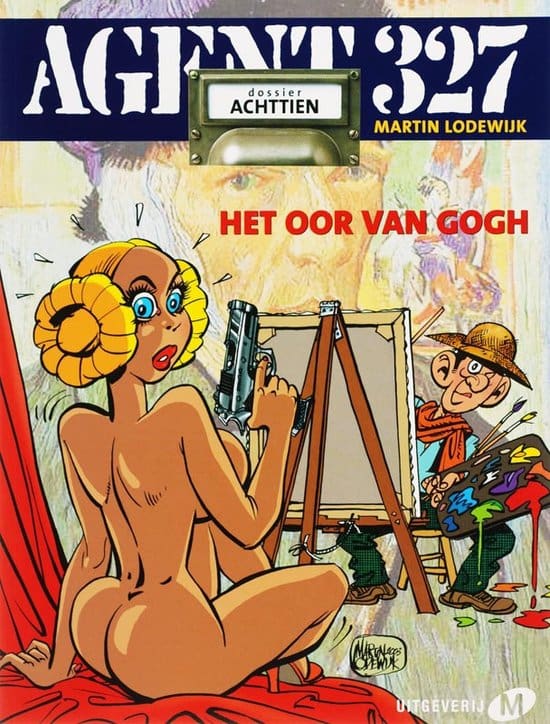 Anyways, another interesting note is that Martin Lodewijk featured a cartoon of a chronograph watch in one of his Agent 327 albums (Het oor van Gogh, 2003). For legal reasons I won’t publish the image in this article, but it vaguely resembles the Omega Speedmaster so it was probably based on his personal timepiece.

All still images by RTVRijnmond. Comic book images copyright by Martin Lodewijk. A big thank you to Paul Dezentjé.