In 2007, Omega celebrated the 50th anniversary of the Speedmaster family. In my opinion, there is one very special member of this group that is too often overlooked. Perhaps reference 311.33.42.50.01.001.001 is shunned for its enamel dial. Maybe it’s down to its F. Piguet based 3201 movement. Whatever the cause for its past neglect, it’s about time it got a bit more attention.

And, in my opinion, it deserves it. Not only because of the commemorative character of the watch but because of the enamel dial, hand-wound Omega caliber 3201, and, last but not least, its impressive presentation box. 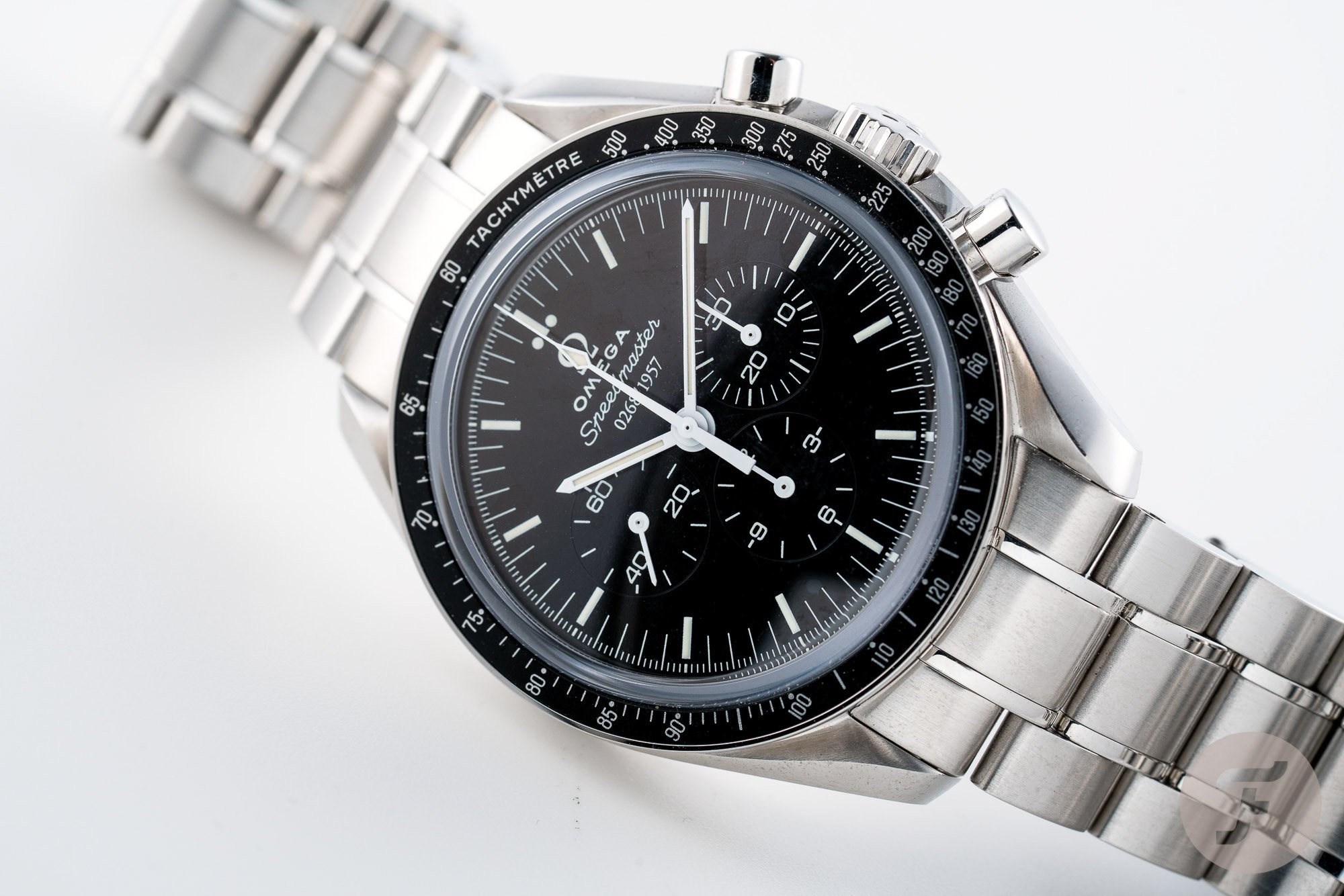 In 2007, Omega introduced two Speedmaster models that commemorated the 50th anniversary of their famous chronograph. The most visible of the pair is the Moonwatch 50th anniversary. Limited to 5,957 pieces (we wrote about it on Fratello here), it is remembered for the golden Seahorse on the dial. Then, there’s the version we have here with the enamel dial and the Omega caliber 3201 movement. In fact, the model was available in yellow, red, and white gold, limited to 57 pieces of each, and in stainless steel, limited to 1,957 units. Officially, Omega included the ‘Moonwatch’ in the model name of the Omega Speedmaster 50th anniversary reference 311.33.42.50.01.001. There are definitely a lot of similarities with the Moonwatch. Let’s have a closer look. 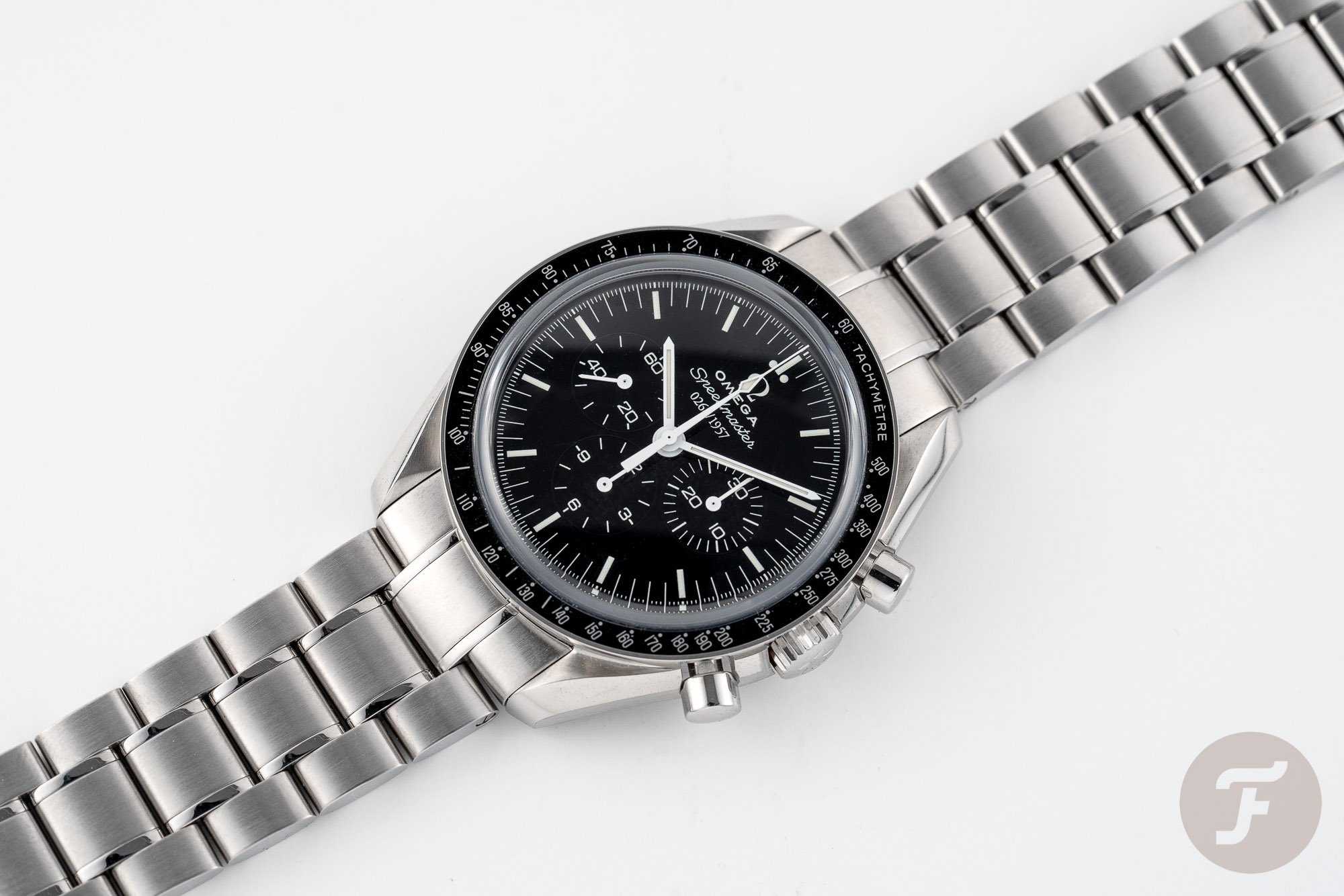 At first sight, this Speedmaster 50th anniversary from 2007 might appear as the regular Moonwatch 3570.50 (or the ridiculously long number it has today). Perhaps you didn’t even notice it yourself when seeing the cover image of this article. There are a few giveaways though. Although the 42mm case and bracelet style is the same as the Moonwatch, the dial and printing on the dial are different.

First, you will notice that there’s a number on the dial, which is the unique number of the limited edition. But you will also find the Omega logo and wording to be slightly different. The Omega logo is quite large and in a vintage style. The wordmark is also in an older style and you will find the word ‘Professional’ missing from the dial. Speaking of which, the dial is made of enamel. Also interesting, the 13mm thick case is water-resistant to 100 meters. That is significantly better than the 30 meters water-resistance offered by the standard Moonwatch. 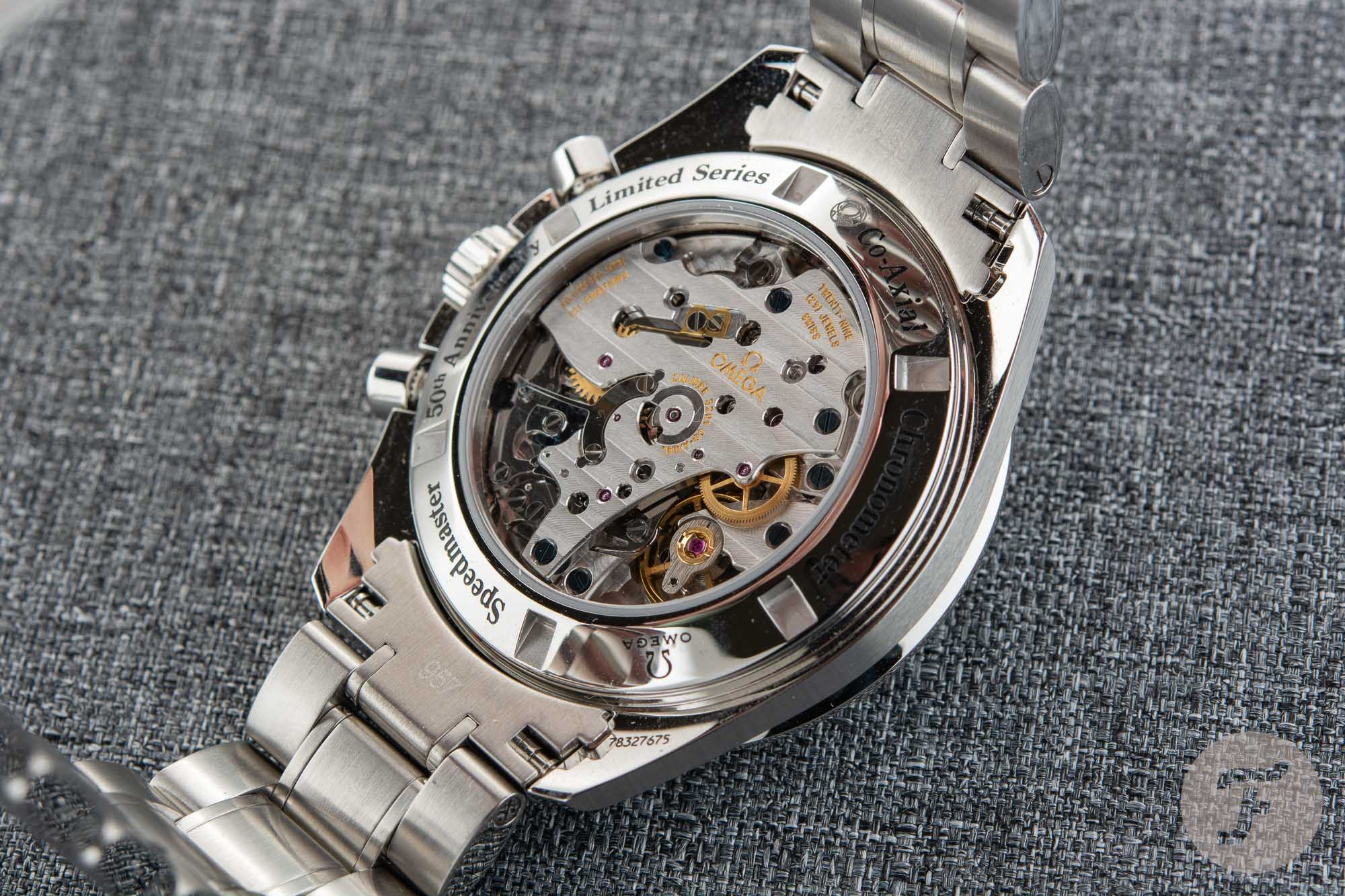 If you turn the watch around, you will immediately see something else is going on as well. The watch is powered by a movement that’s not from Omega, or Lémania, but F. Piguet. This movement is known from some of the other Omega Speedmaster Co-Axial watches from the early 2000s that used caliber 3313, along with some Blancpain chronographs and Audemars Piguet Royal Oak chronographs, for example. Those are all self-winding movements, though.

This is a hand-wound version and has the Co-Axial escapement fitted as well. This is caliber 3201, not to be confused with the famous 321 movement, but it does have a column-wheel mechanism. Besides that, the movement is also chronometer certified. The rhodium-plated movement has a power reserve of 52 hours, has a nice Côte de Geneve finishing on the bridges. On the case back, you will find some specifications, as well as the limited edition number and the Omega brand name engraved in the old style. The movement has a ticking speed of 28,800vph, which is much higher than the 21,600vph of the standard Moonwatch. The smooth sweep of the seconds hand running against the enamel dial backdrop is really something to behold. 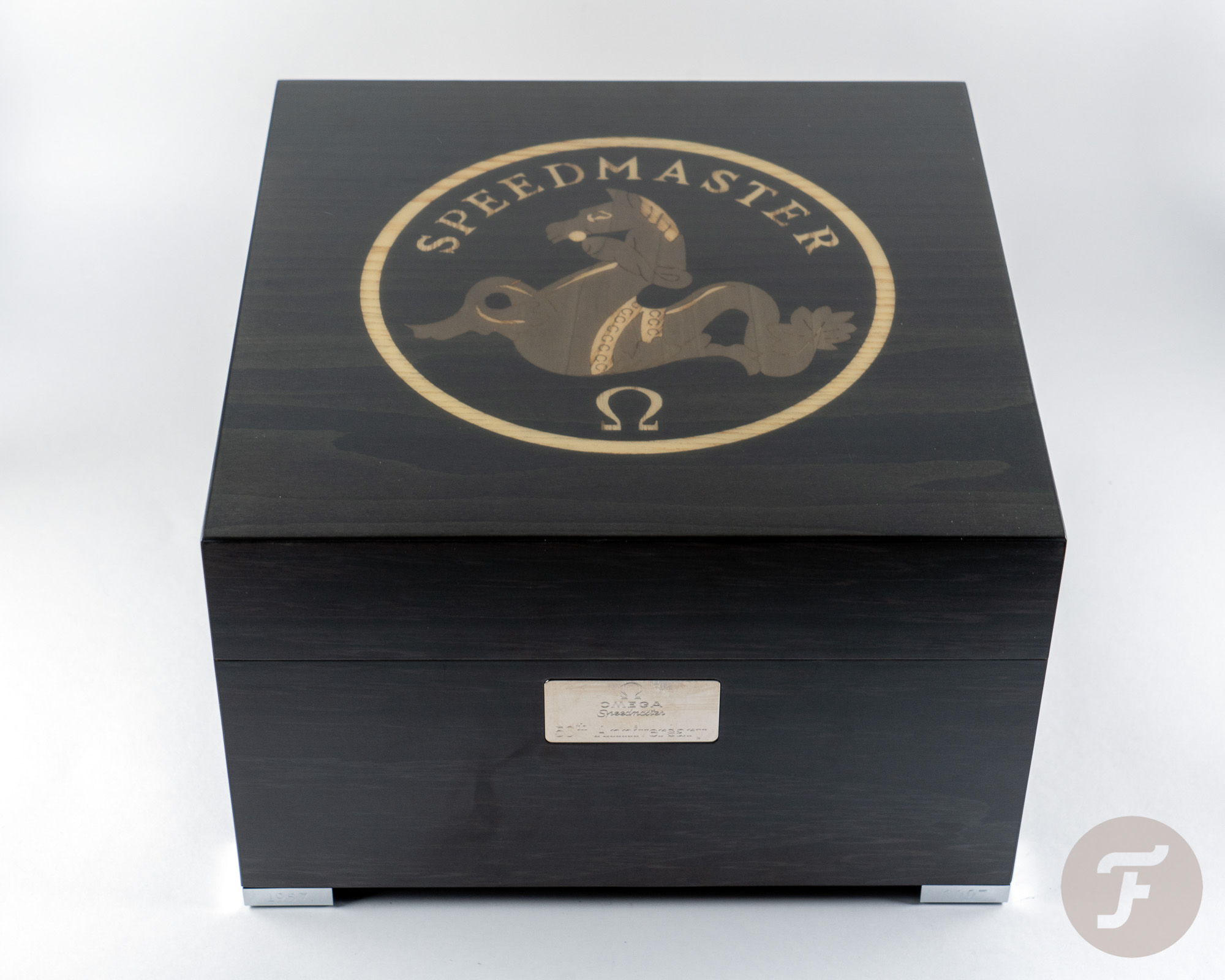 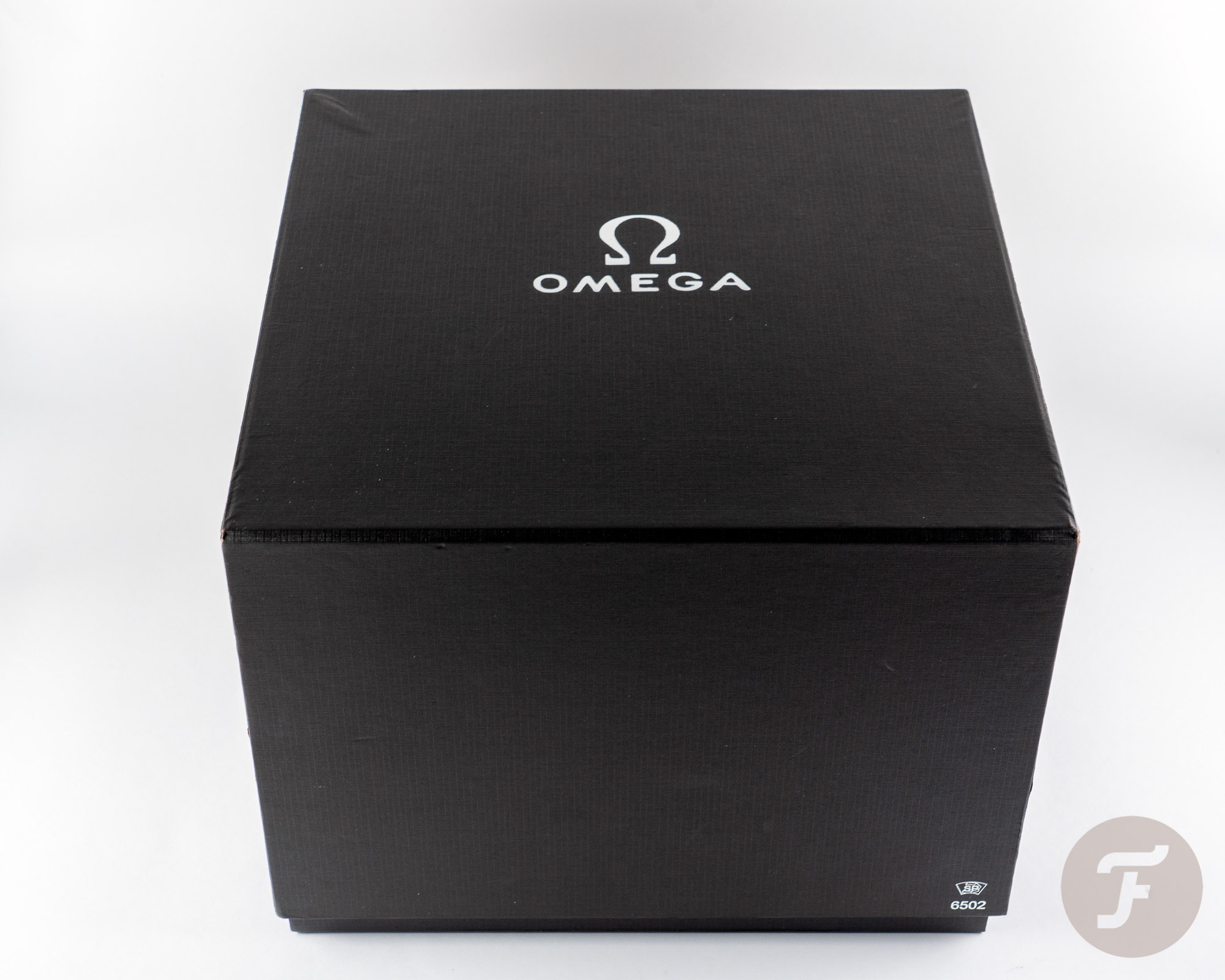 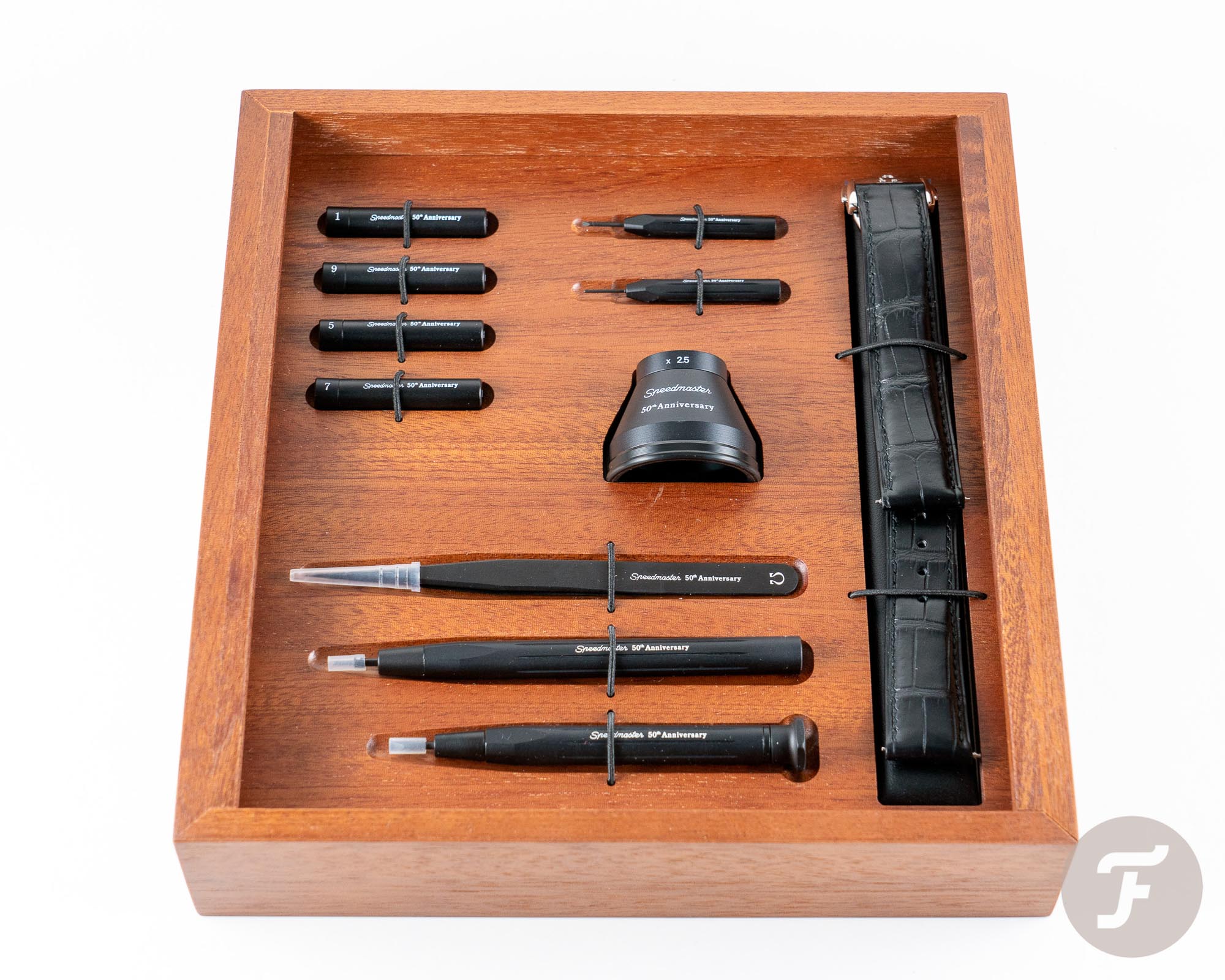 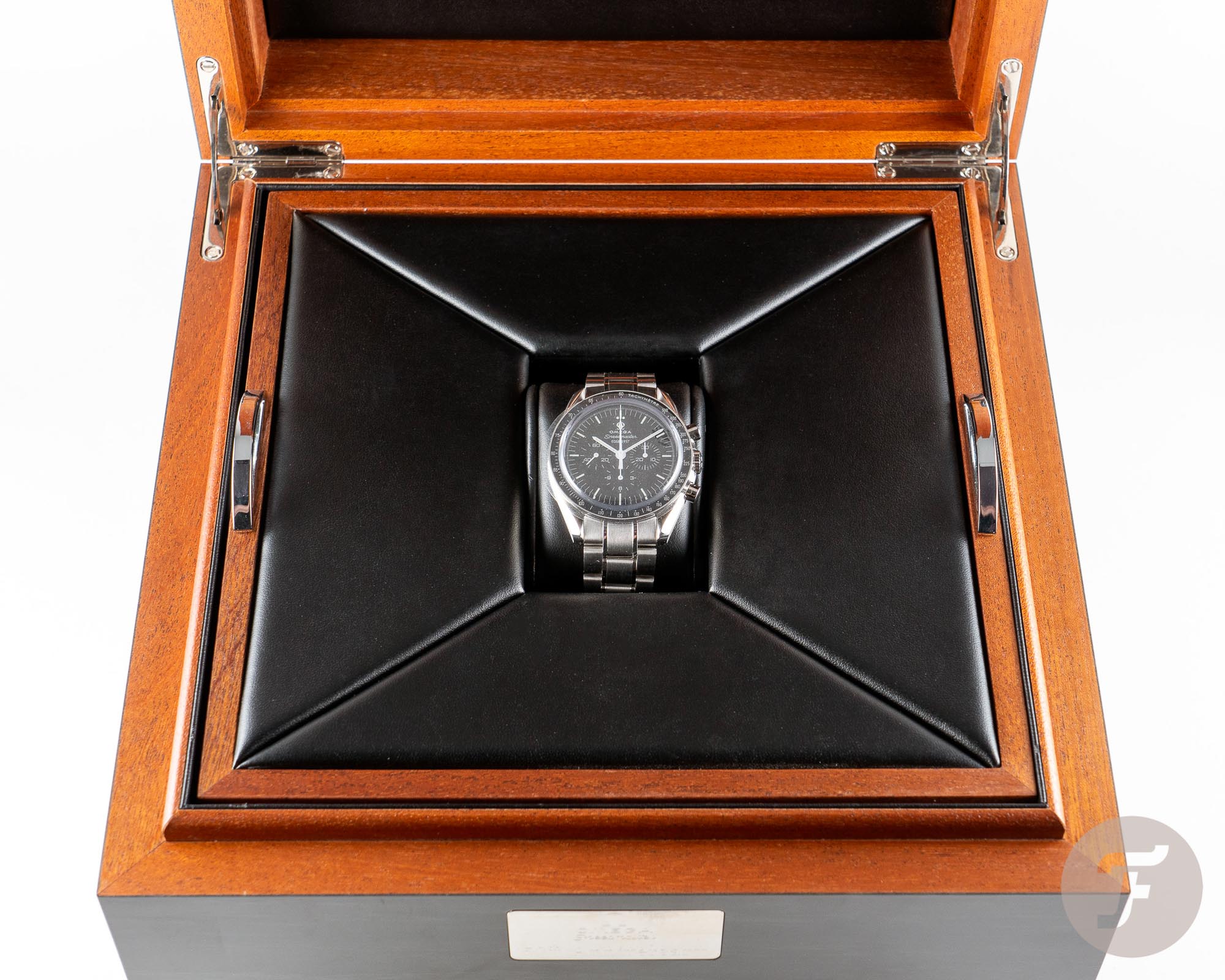 The box of this Speedmaster 50th anniversary 311.33.42.50.01.001.001 is a piece of art on its own. After removing the black outer box, you will find a beautiful wooden box with impressive dimensions (30cm x 20cm x 20cm) and weight (about 6 kilograms). The watch is on the black leather interior, but as you can see you can lift this part out.

Below, you will find a wooden tray with watchmaking tools (screwdrivers, pin remover, a loupe, etc) and an additional leather strap with steel folding clasp. In the booklet that comes with the watch, you will find a thorough explanation of all the tools you will get with this Speedmaster 50th anniversary model. Normally, boxes end up in storage with me, but boxes like these deserve a prominent spot in your office or men cave at home. Just like the enamel dial, it is simply beautiful. 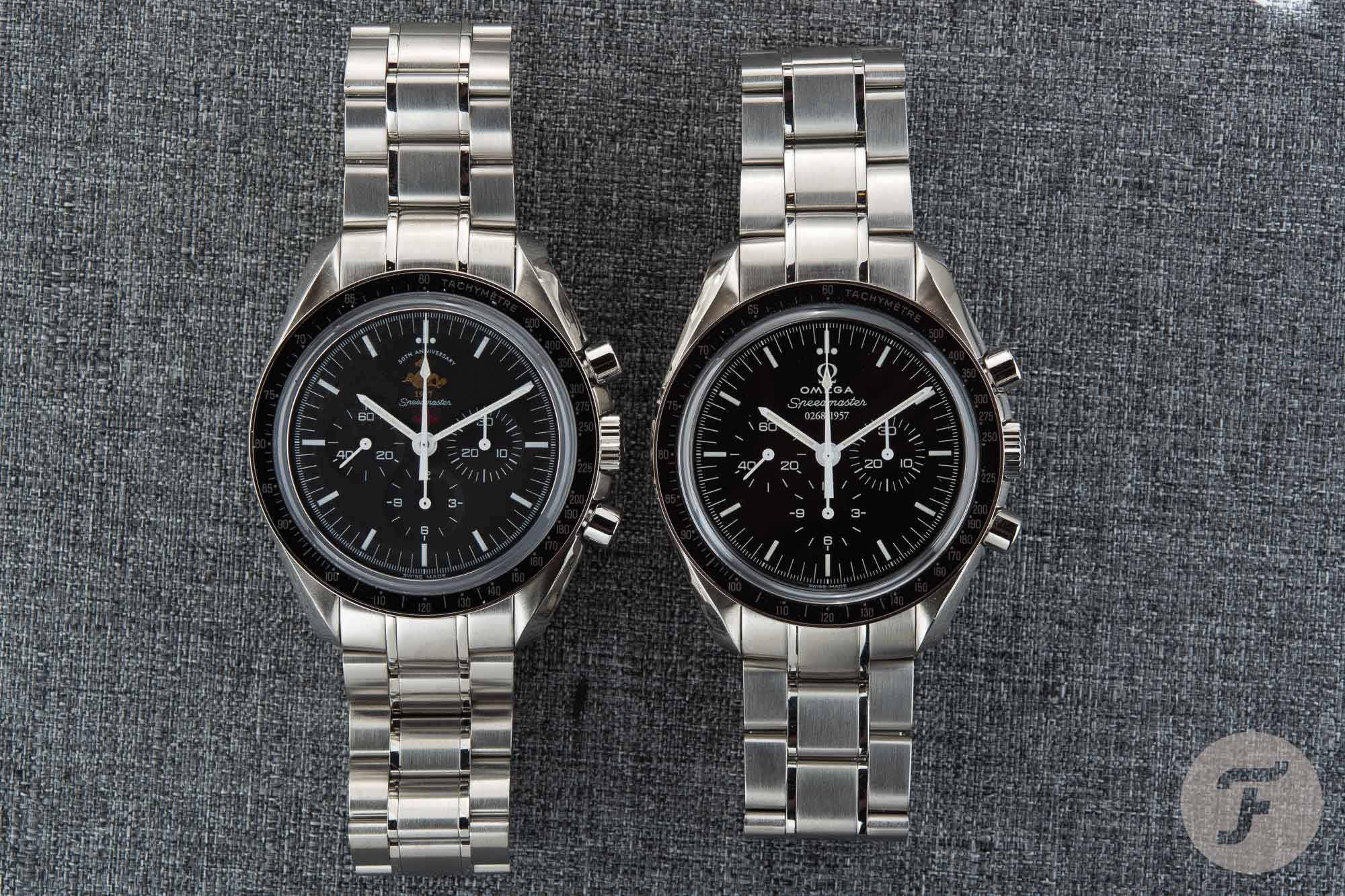 Both 50th-anniversary editions from 2007. On the left the gold Seahorse patch edition (5957 pieces) and on the right the enamel dial version (1957 pieces). 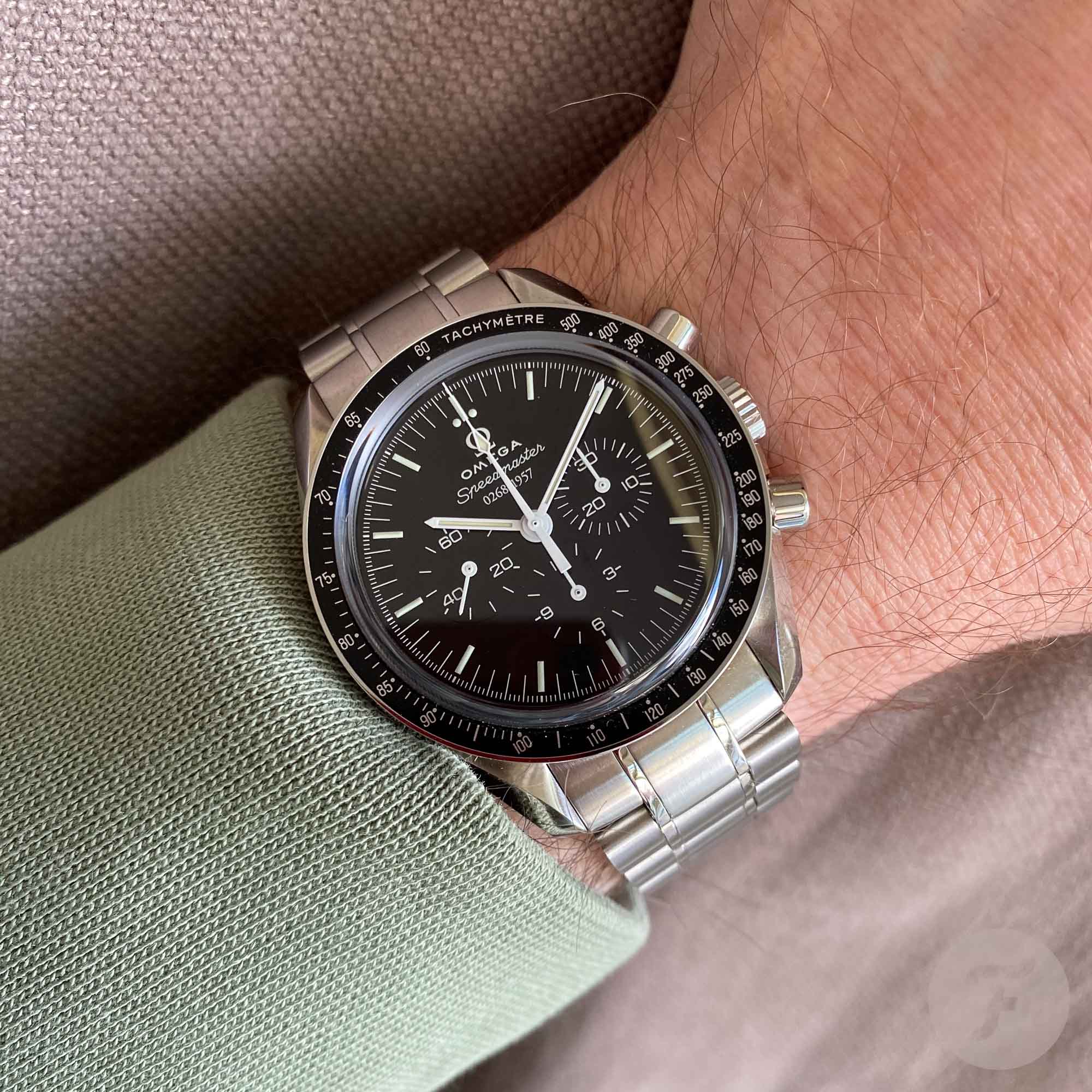 This Speedmaster 50th anniversary from 2007 is very similar to the normal Moonwatch (sapphire sandwich), but the details make it a bit more special. The enamel dial, the vintage Omega logo, and of course the package that comes with it. The stainless steel bracelet (reference 1957/957) has screws instead of pins, which wasn’t very common in 2007.

The watch is perhaps best described as the luxury version of the standard Moonwatch (with sapphire). Although when worn on the wrist, nobody except you and a few Speedmaster fans will probably notice — true stealth luxury. Prices in the pre-owned market vary between €6,200 and roughly €10,000, but a full set (box and papers) is definitely worth holding out for as it is part of the experience with the Speedmaster 50th-anniversary reference 311.33.42.50.01.001.001. These full set versions start at around €7,300 in good condition and run up to €10,000 for a never-worn example.

Hot Topics
Introducing: The Omega Speedmaster Super Racing With Spirate System
151 comments
Design Vs. Specs — Which Is More Important To You When Buying A Watch?
85 comments
The Updated Bracelet For The Omega Speedmaster Professional 3861 — Here Is What’s New!
53 comments
The Time To Buy Is Now: How The Current Economic Climate Influences Watch Buying And How You Should React
49 comments
Introducing: The New Cartier Tank Française
49 comments
Popular
Hands-On With The Seiko Prospex Dawn Grey Series
Robert-Jan Broer
12
Grand Seiko SBGA211 ‘Snowflake’ And Why I Didn’t Buy It
Robert-Jan Broer
23
Two Patek Philippe Nautilus Watches: 3700/1A Versus 5711/1A
Robert-Jan Broer
16