It’s Speedy Tuesday! As you might have seen in our Speedy Tuesday Event report, Omega brought the original gold commemorative Speedmaster Professional BA 145.022 with them that belonged to astronaut Thomas Kenneth “Ken” Mattingly II. This Tuesday we discuss his gold Speedy that he – and other astronauts – received as a gift from Omega. Only 1014 of these Speedmasters have been made and even fewer were – of course – particularly for astronauts and other VIPs and have a slightly different engraving then the public models. 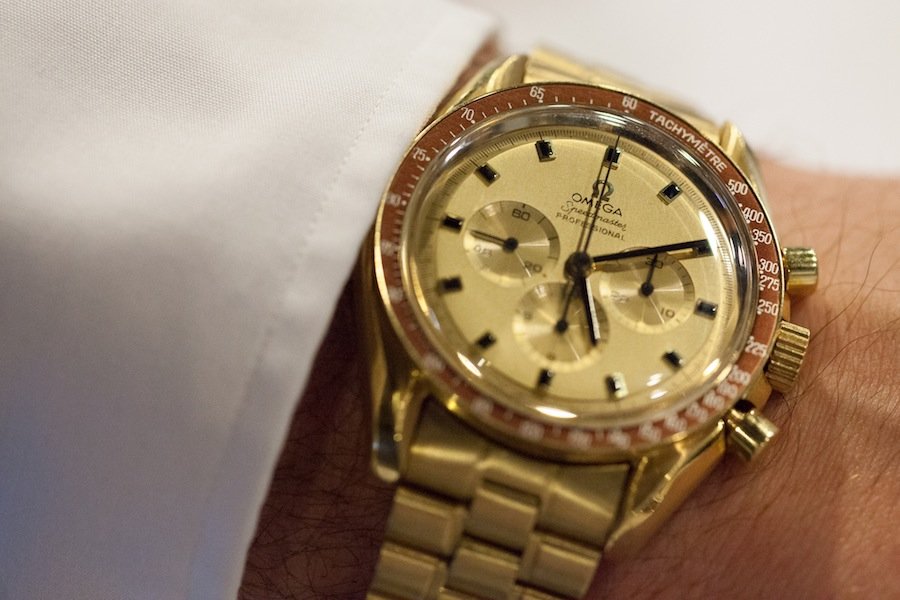 Ken Mattingly worked for NASA from 1966 to 1985 and flew on NASA missions Apollo 16, STS-4 (Space Shuttle) and STS-51-C (Space Shuttle). However, perhaps the most interesting and well-known story about Ken Mattingly is that he was assigned to be the Command Module pilot on the Apollo 13 mission. We all know how that went. He was exposed to someone with the measles and was replaced by Jack Swigert. According to former NASA engineer James H. Ragan, who elaborated on this story last week during the Speedy Tuesday Event, it was of tremendous help that Mattingly was on the ground after the Apollo 13 got into problems. He had a vital role in helping to solve the issue on board of the spacecraft. 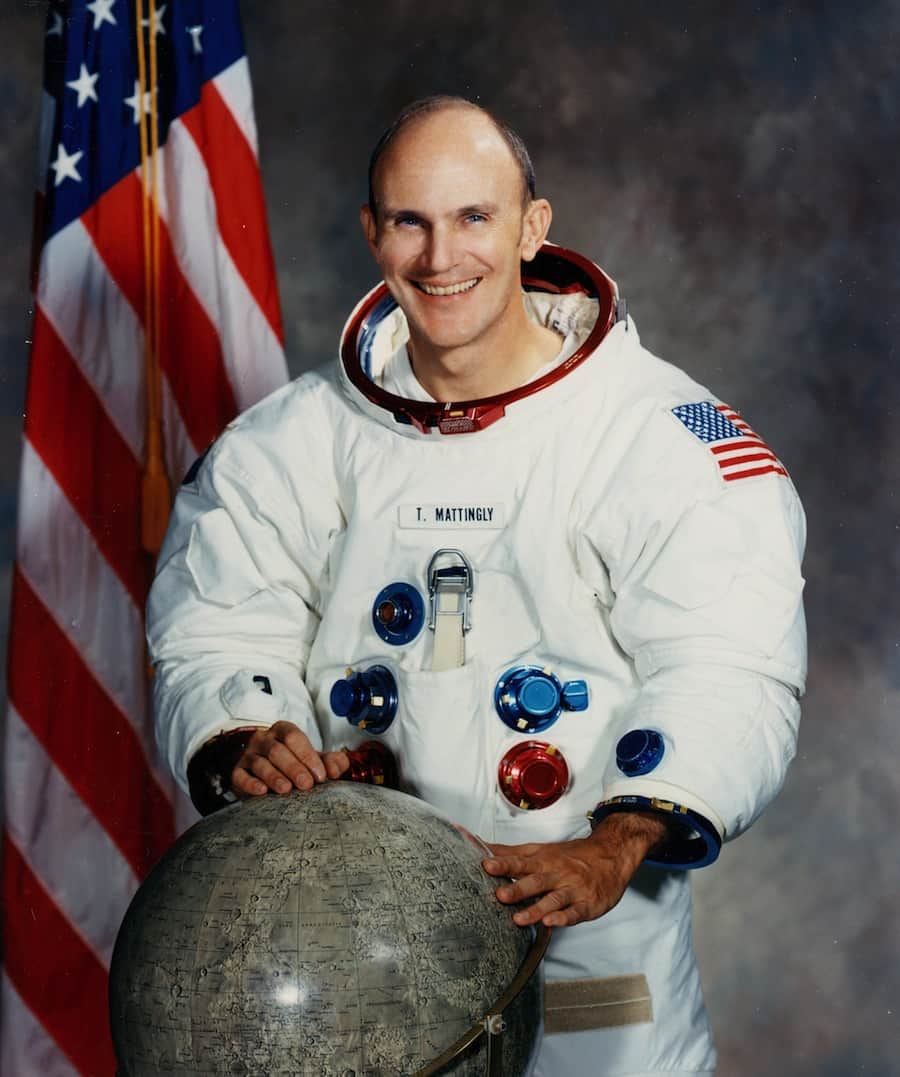 Mattingly then got assigned to be the Command Module pilot for the Apollo 16 mission in 1972. He even performed an EVA (Extra-vehicular activity) to retrieve some film and data packages that were located on the outside of the service module. Apollo 16 was aborted one day before its planned date, as there were some complications with this spacecraft as well. All major tasks were completed though and the Apollo 16 returned home safely without the crucial need for a chronograph this time.

In total, there are 1014 of these watches. The first 30 were numbered and offered to President Nixon, his vice-president and 28 astronauts offered to them at a gala dinner November 25, 1969 at Hotel Warwick in Houston (according to this article). 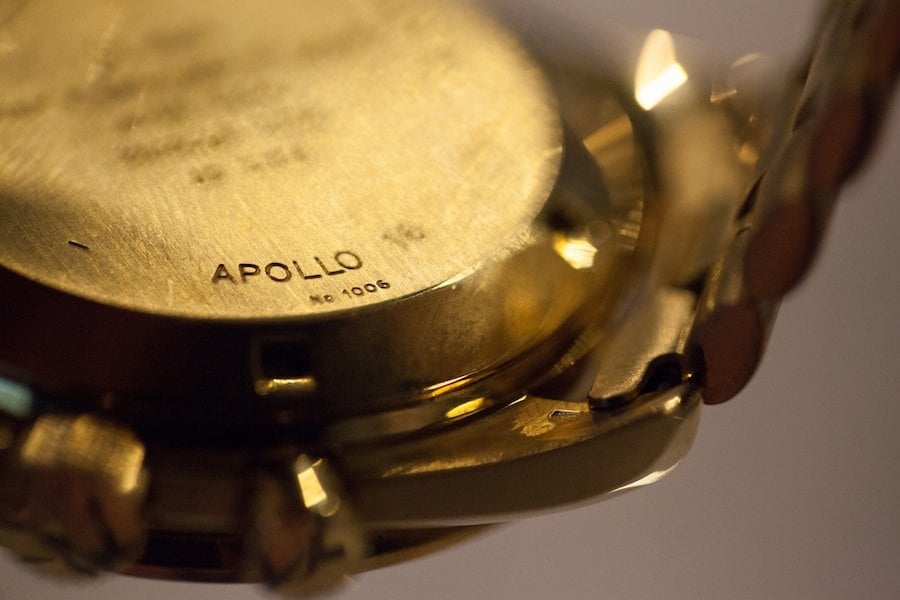 The rest of the gold BA145.022 Speedmaster Professional watches were available to the public and once in a while you run across one at an auction or at Chrono24 for example.

The gold commemorative Speedmaster Professional watches that were made available to the public bare the horizontal inscription “The First Watch Worn On The Moon” with a number engraved below and ‘Apollo XI 1969’ at the bottom. Yes, there was also a limited batch of stainless steel models with this horizontal engraving. Rumor is that thee are only 300 of these.

The astronaut (and Presidential) models of the Omega Speedmaster Pro BA 145.022 have a different inscription as you can see on the picture, it says: “to mark man’s conquest of space with time, through time, on time” with the name of the receiver engraved above this text and for astronauts, the mission below. 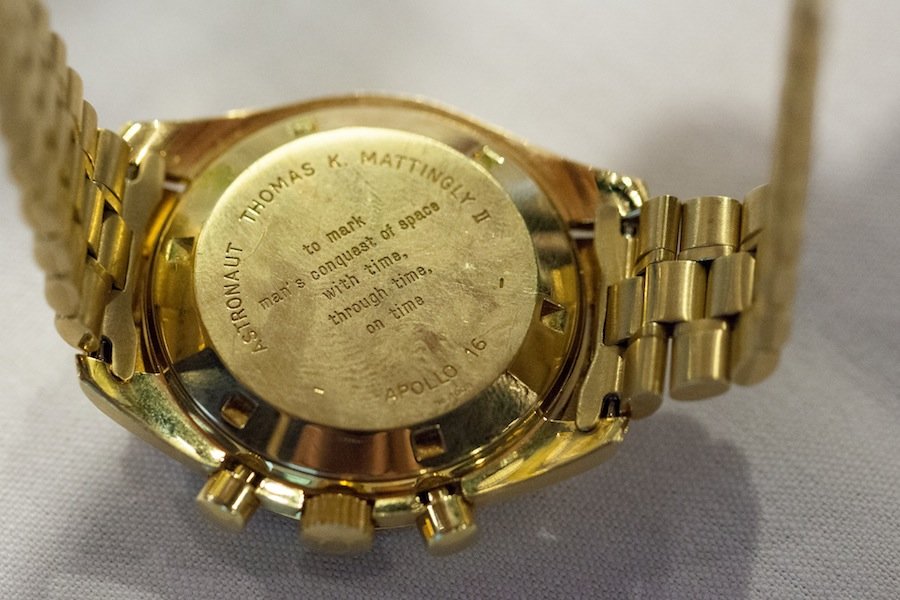 Like all other Omega Speedmaster Professional (reference 145.022) watches from that time, it used the newer Lemania-based caliber 861 movement that Omega used until 1997 when they upgraded to the caliber 1861 movement. The bracelet also was a bit different from the stainless steel models, and tapered a lot towards the buckle actually. It is very small.

Estimated value of a good example is between 10.000 and 20.000 Euro, depending on condition and whether it is complete with box and papers. The box that came with this watch is the so-called Moonrock box, which we’ve shown to you earlier on (click here).

Last week, we even had two of these watches at the event. The one from Ken Mattingly and one of the visitors also had one (with original Moonrock box). The picture below shows him wearing both gold Speedmaster Professional reference BA 145.022 watches. 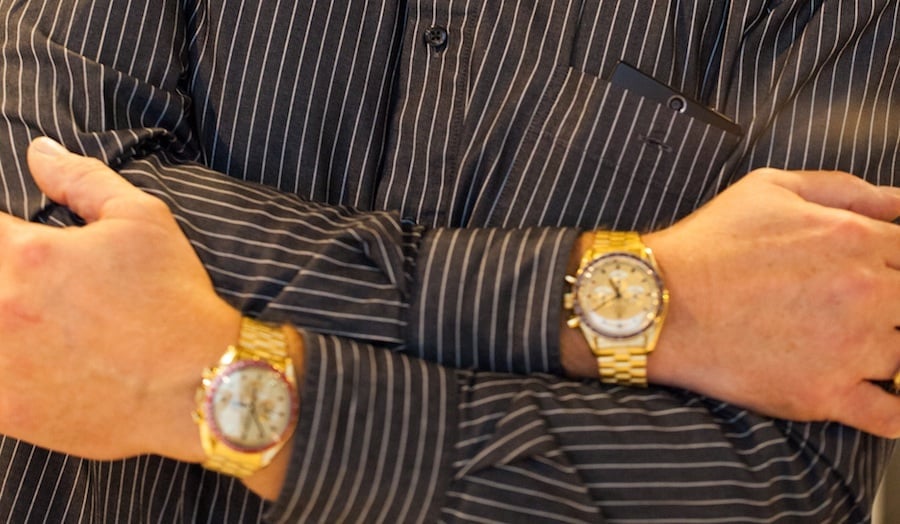 More on the Speedmaster Pro BA 145.022 can be read here, in this excellent article from C. Bradley Jacobs

Here is the watch being offered at the OmegaMania auction of 2007 at Antiquorum (thanks Dale). The auction item has a strange and unclear remark in the end, that it was kept by Omega’s US Agent and not presented to Ken Mattingly but to his wife (which is strange) and who then sold it to the Omega Museum in 1997. How it ended up at this 2007 auction and then again at the Omega Museum remains to be vague.

Credits for all pictures in this article go to Bas.

Hot Topics
Introducing: The Omega Speedmaster Super Racing With Spirate System
165 comments
Design Vs. Specs — Which Is More Important To You When Buying A Watch?
87 comments
New Release: The Limited-Edition Seiko Prospex SLA067J1 Diver
59 comments
My Predictions For New Omega Speedmasters In 2023
57 comments
The Time To Buy Is Now: How The Current Economic Climate Influences Watch Buying And How You Should React
51 comments
Popular
Rolex Submariner – Historical Overview Of A Diving Legend
Robert-Jan Broer
22
(From The Archives) Shut Up & Read The Truth About Cartier Watches
George Cramer
21
10 Tips For Better Watch Photography
Bert Buijsrogge
12