It’s Speedy Tuesday! We realize we’ve been discussing the Omega Speedmaster Pro X-33 quite often here lately, but it seems we are not the only enthusiast about this model. Recently we received an e-mail from Philip Kisloff – who owns an Omega Speedmaster Pro since 1977 – with a very nice write-up on the new Speedmaster X-33 3rd Gen (reference  318.90.45.79.01.001) model. We would like to share his article with you today. 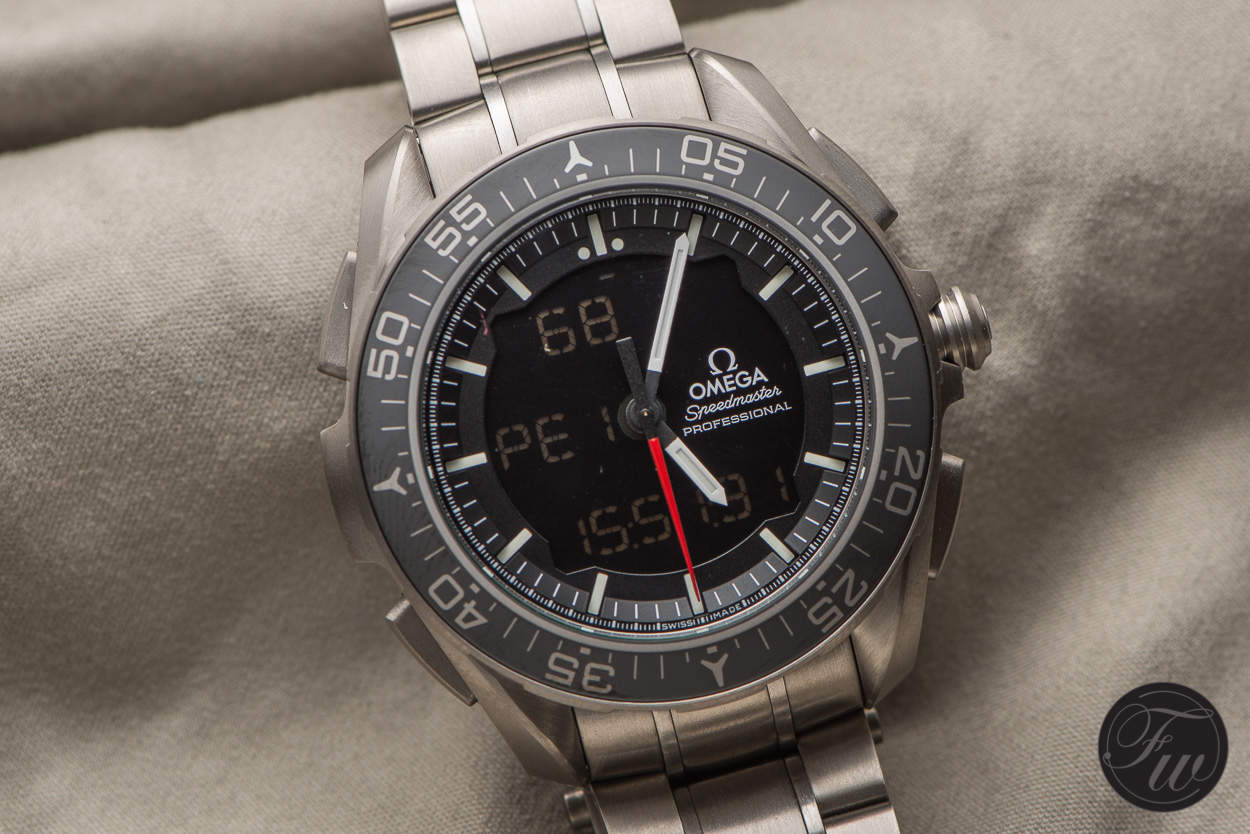 I’ve owned an Omega Speedmaster Caliber 861 for almost 40 years, wearing it proudly for almost every day of that time. For one thing, it’s a tangible connection with the greatest feat of exploration in history. Even on its own, the Speedmaster is a classic watch with aesthetic appeal combined with a proven out-of-this-world capability. The elegant combination of form and function is always compelling. Nevertheless, the freshness the Speedmaster brought all those years ago has been diluted somewhat. Other makes of sports watches all now feature the ubiquitous chronograph dials too, or add a bewildering spirograph of markers, even if they don’t actually do anything more than pretend to make the watch more than it really is.

The new X-33 Skywalker is a return to re-claiming the mantle of an astronaut’s watch. I know the original X-33 “Mars watch” was meant to be that anointed successor, but the impression I got was that they were frankly interchangeable with the Timex Ironman in the crew preference items for Shuttle and ISS missions. Certainly a fine pilot’s watch, but not the must-have watch that the Speedmaster was for EVA. 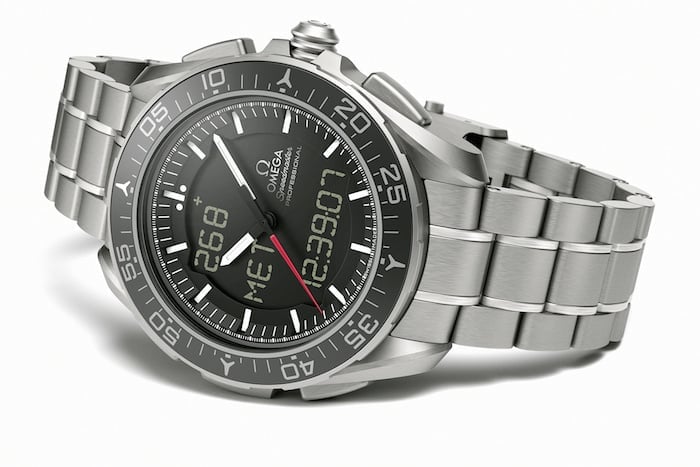 With the new X-33 Skywalker, you will find many of the functions you’d expect from the successor of the original X-33, such as multiple time zones, alarms, mission elapsed time (MET), date and a chronograph. It also has something invented by ESA astronaut Jean-François Clervoy, called phase elapsed time (PET) and it this that makes the watch unique.

To explain PET, one has to take a step back and perform some category definitions. Specifically, the new X-33 provides a selection of timescales and a selection of functions, and it is important in understanding PET to see how these work together.

The timescales include a choice of time zones, a reference time frame (called in the X-33 GMT but also known as UTC or an arbitrary ZULU time), and a mission elapsed time (MET) that can be initiated independently to the other timescales.

The functions include three alarms, distinguished with different beeps; a chronograph indicated in the watch as “CHR” which records elapsed times as a stopwatch would do; and a timer “TMR” that counts down towards zero a pre-defined and relatively short period of time. PET, although sounding similar to MET, is not a timescale but a function that allows marking an event in one of the timescales such as MET, GMT or a time zone.

Why is PET necessary, or necessarily unique to space travel? For spaceflight navigation, ignore if you will the image of Luke Skywalker in an X-fighter, and think more of Jim Lovell in Apollo 13. The reality of navigating a spaceship entails a series of minutely timed and controlled events, whether they are orbital corrections, interplanetary insertions or vehicle rendezvous and un-docking, to name a few characteristic mission phases.

PET provides the function to set a precise time/date with reference to one of the aforementioned timescales, and counting down the remaining time to – or recording the elapsed time from – that point. An example of the distinction between forward and backward timing in practise could be an EVA phase, where the passage through an automated airlock is coordinated from a set start point, but the duration of EVA can be more elastic so long as a safety margin is maintained. Crucially, the PET can be set for forward (elapsed) counting from a point in the past! In other words, it would not be necessary to set PET at the point of lift-off but entirely possible to do it beforehand or even afterwards when there is time to do so.

In the X-33 Skywalker, elapsed time is considered positive (as in D-Day plus the number of days after a famous amphibious assault landing of the same name) and remaining time as negative (as in T minus however many H:M:S until a rocket launch from Cape Canaveral). Indications at present are that the PET range catered for is from -99 to +999 days. If 999 days was insufficient time between phases, I assume an intermediary phase could be created.

Unfortunately, it’s an inescapable fact that many future X-33 Skywalker owners will never make it into space. That doesn’t mean the functionality is without earthbound uses. In the age of 24 hour global business activity, with every hour filled somewhere and needed to be accounted for, I can see the utility of being able to monitor the time remaining in which one has to prepare for a remote meeting set up in another time zone, and then being able to automatically record the time actually spent on this activity. Admittedly though, getting these timings wrong would be unlikely to caste the hapless space cadet adrift orbiting the sun for eternity.

So why am I eager to own the new X-33? I think the X-33 Skywalker nods in the direction of my original Speedmaster, updated for half a century later yet still faintly similar with its black face and white baton hands. Even the name “Skywalker” reminds me of the hubris of naming a watch ”Speedmaster” on what I always considered was a tenuous link to the functionality of a tachymeter bezel. Perhaps like the Speedmaster’s qualification for lunar EVA, the new X-33’s PET functionality will not be used as much as mundane time telling either, but that doesn’t mean I don’t want the adventure it conjures up all the same. 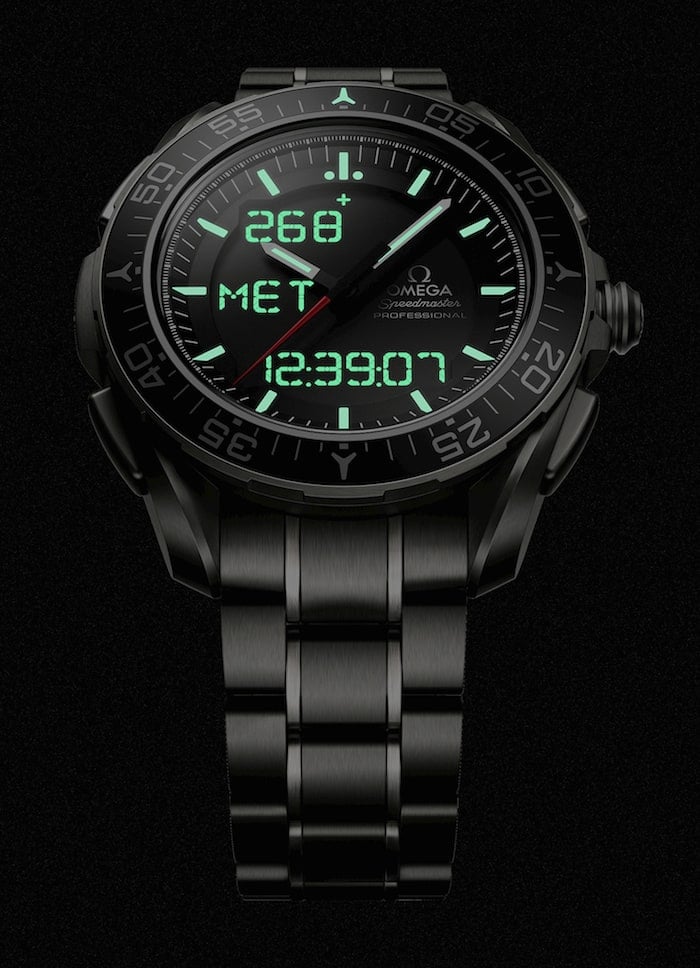 Do you want to share your review or story on a Speedmaster? Drop us a line.

Other BaselWorld novelties by Omega can be found here.