It’s Speedy Tuesday! Our successful Speedy Tuesday Event that we organized on the 29th of October in ESA-ESTEC’s official visitor centre Space Expo led to a number of Speedmaster purchases. Even up till now we receive e-mails and notifications from people who bought a (new) Speedmaster as the Speedy Tuesday Event inspired them to do so. We are happy to hear these stories and some of them are rather special. 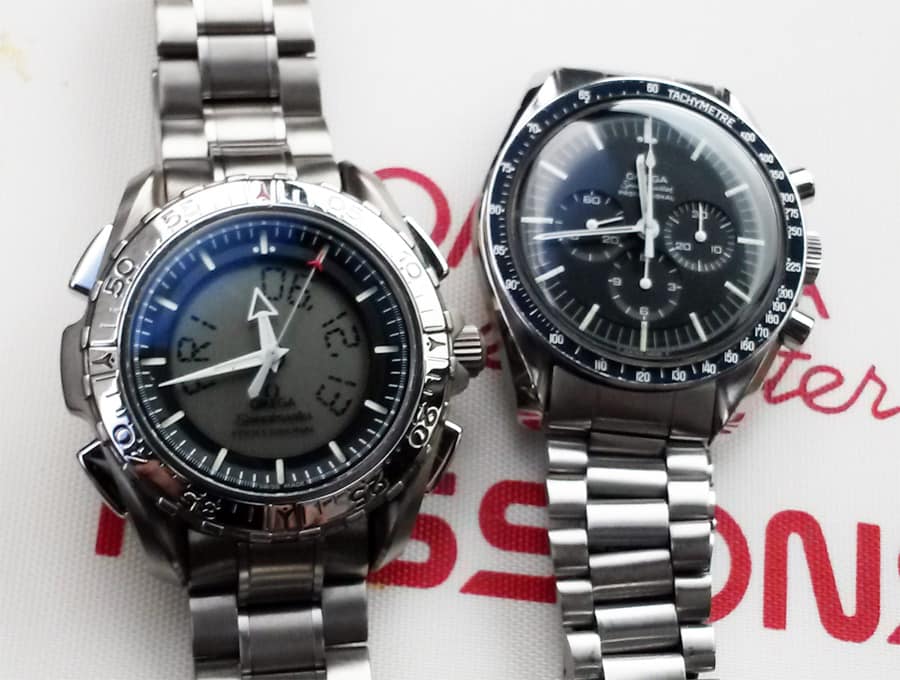 One of the cool stories we got so far are the purchases of very beautiful CK2998 watches, a bunch of new Speedmaster Professional 3570.50 models, a 105.003 and an X-33. We have covered the Omega Speedmaster Professional X-33 before and although we think it is an ugly watch, the features and the way it operates (call it intuitive use) is amazing. Even RJ got one himself last month after he was intrigued by the ones from two fellow Speedmaster fans during the Speedy Tuesday Event.

Anyways, one of our readers and visitors of the Speedy Tuesday Event is Hans. Just like RJ, he was sparked by some of the X-33 watches that were present that day and decided to go after a nice mint condition X-33 himself.

As you can see above, the X-33 came with the titanium bracelet and kevlar strap. It is an Omega Speedy Pro X-33 from the 1st Generation, which was on the market only for a short period (1998 – 2001) and was succeeded by the 2nd Generation X-33 that was in production from 2001 – 2006. The 2nd generation had a bezel with brushed finish and a luminova dot. The polished square pushers were replaced by satin finished ones and the crown was replaced by one with vertical grooves for easier use (while the watch is worn). The new X-33 was introduced as a reference 3991.50 on kevlar or 3291.50 on a titanium bracelet. Also, the caseback on the 2nd Generation X-33 had the “Certified by NASA…” inscription in the caseback while the 1st Gen X-33 only had the Seahorse emblem. During the same period as the X-33 2nd Gen was produced, a number of specials were also introduced. One was for the Team New Zealand (12 pieces only) and had missing hands (only digital display) and a Team New Zealand logo on the dial. Also, a number of specials have been introduced for flying squads (pilots and astronauts) between 1998 and 2006, one of them is a special for the Blue Angels for example. 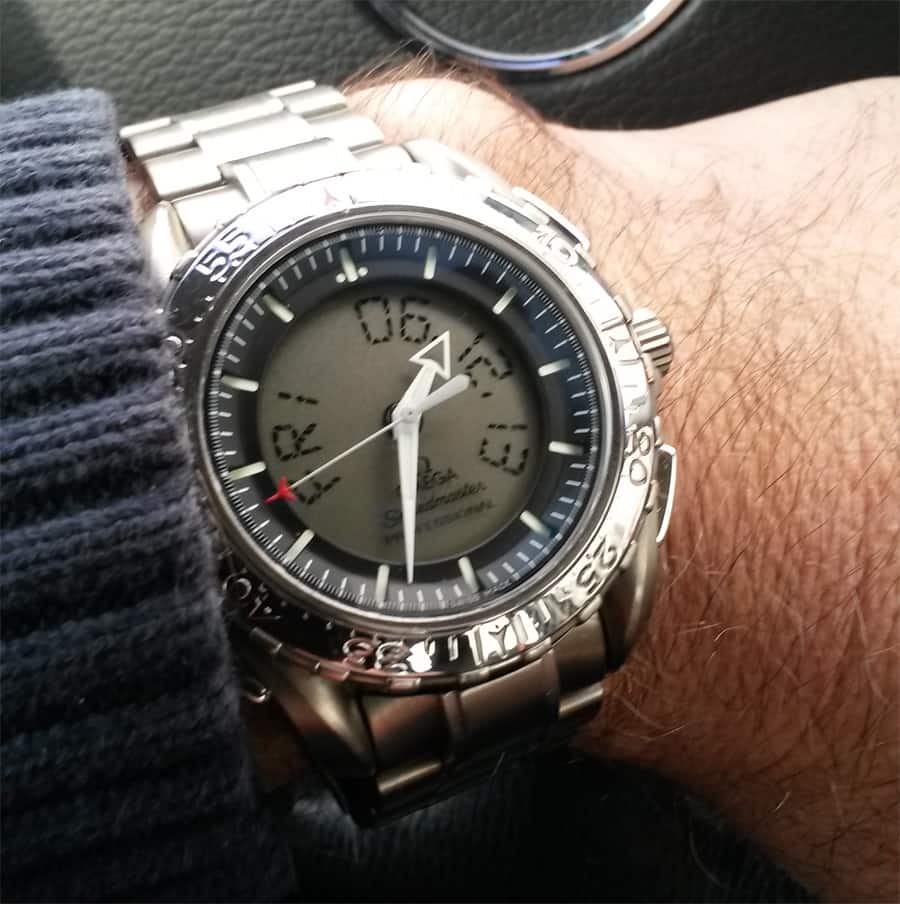 Hans bought himself a Speedmaster Professional X-33 ref. 3290.50 (3990.50 was the reference for one with a kevlar strap) from a collector and he couldn’t be happier. Also, at some point this particular watch belonged to someone from NASA who worked for the Hubble Space Telescope as an Operations Engineer. The provenance for this watch was also given to Hans by the seller, which is pictured below. 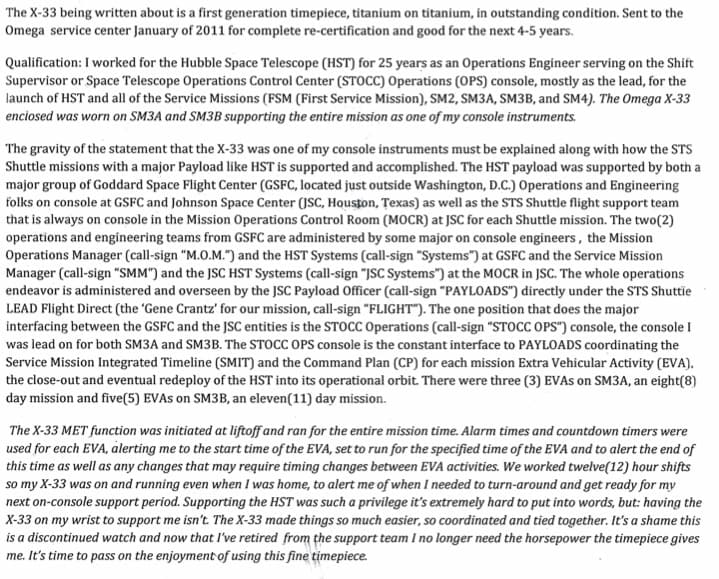 Besides the letter of provenance above, Hans received the full package (white carton box, white watch box made from space suit material and a black X-33 instruction / PR booklet). The watch has been serviced in 2011 and the original receipt of that service at one of the Swatch Group service centers in the USA was also included. 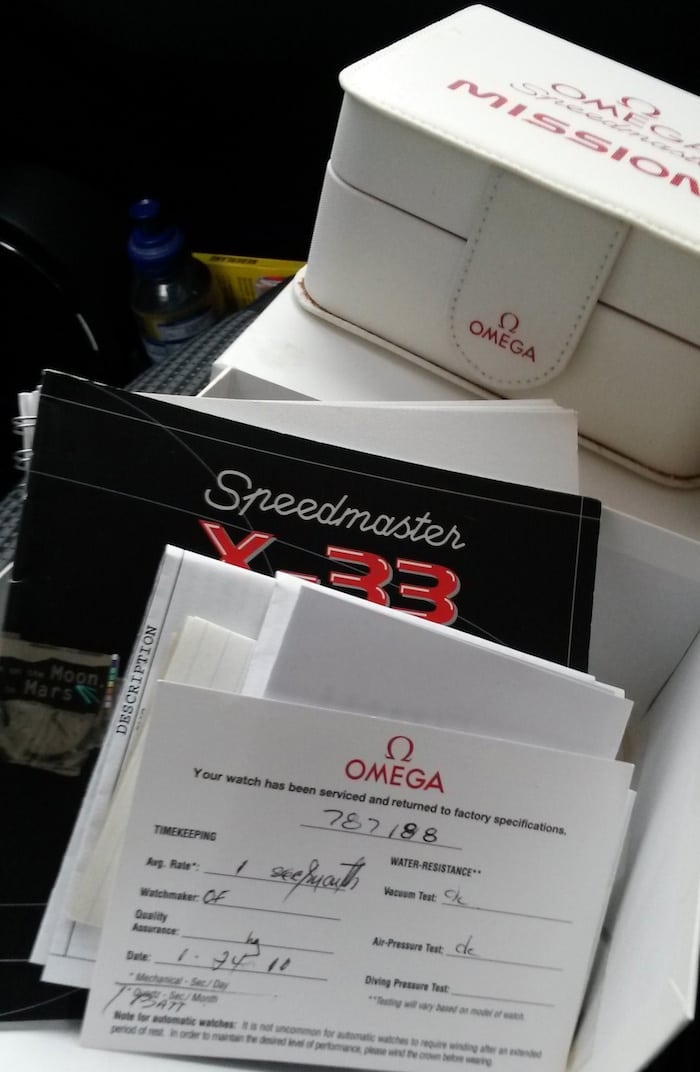 The prices of the Omega Speedmaster Professional X-33 1st Gen and 2nd Gen are creeping up a bit as far as we can tell, but you should be able to get a complete package below 2250 – 2500 Euro in mint condition. Some of the watches are also sold as head-only, which means only the watch case and without any official OEM strap or bracelet or the box and papers. You can find these below 1200 Euro. However, we always urge you to get a complete package unless you are having other purposes with the watch (like giving it a DLC treatment or something).

Hans let us know that he is happy with the watch and also sent us two extra pictures. One is with Dutch astronaut (ESA) Andre Kuipers who is wearing an Omega Speedmaster Pro X-33 together with a watch from Dutch watch maker Roland Oostwegel (the R.O. 1 Space) and a picture of Hans and Andre Kuipers together. 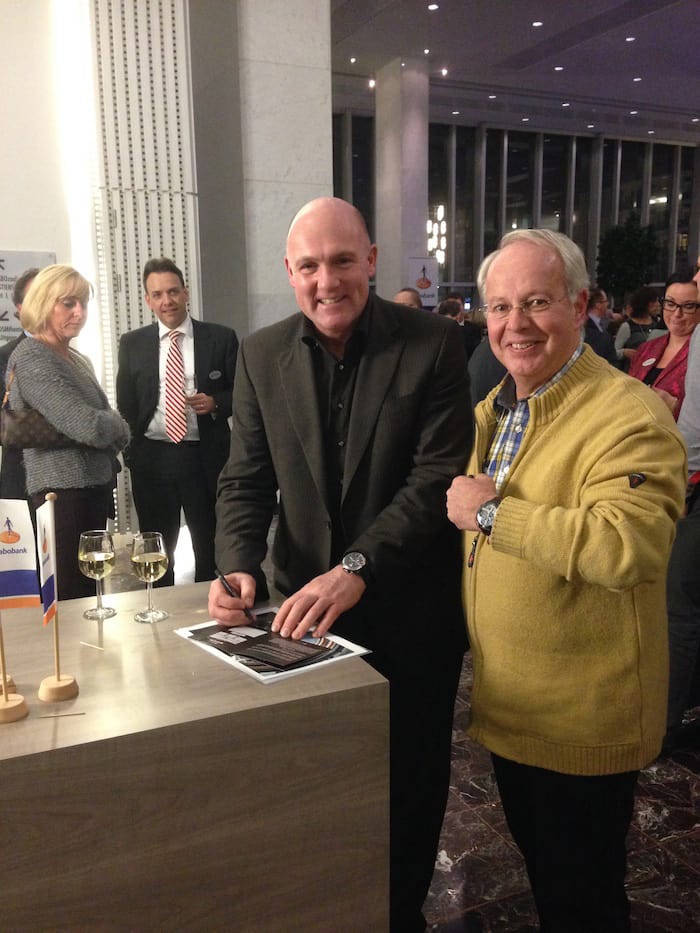 Thanks to Hans for playing along and showing his fabulous Omega Speedmaster X-33 Ref.3290.50 with the provenance that came with the watch.

If you have a Speedmaster or Speedmaster story you want to share, please contact us via [email protected] We would love to hear your stories! Also make sure to join our Speedy Tuesday Facebook page where you can share pictures of your Speedmaster watches and see others’ as well.