Speedy Tuesday – The Rise of the Omega Speedmaster Reduced 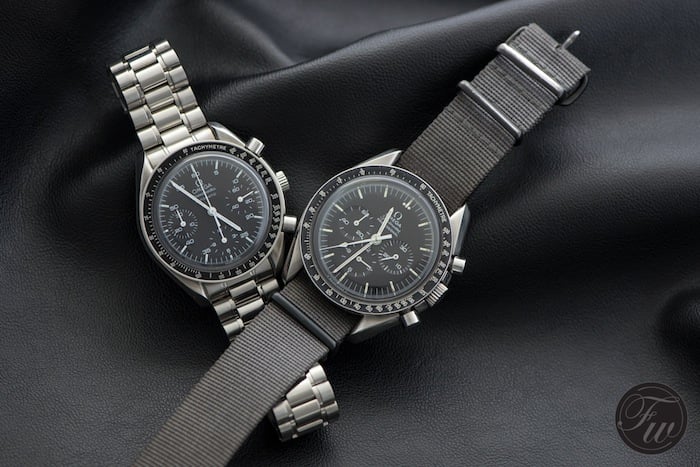 Powered by caliber 1140, the Omega Speedmaster Reduced did not need any manual winding every other two days like the ‘Moonwatch’. Caliber 1140, based on ETA’s 2890-A2 (the no-date version of the famous 2892-A2, also referred to as Omega cal.1120) had a chronograph module added to it. This module was developed by Dubois-Dépraz and was in the books as caliber 2020 (perhaps it still is). If you look at the specifications of the Speedmaster Reduced, you will see that the movement has 46 jewels. That’s quite a bit but can be explained due to the use of a piggy back movement (add-on module). Later on, Omega changed the caliber from 1140 to 3220. I don’t know what this update actually was about, but it might have been a small change inside the base movement or add-on module. 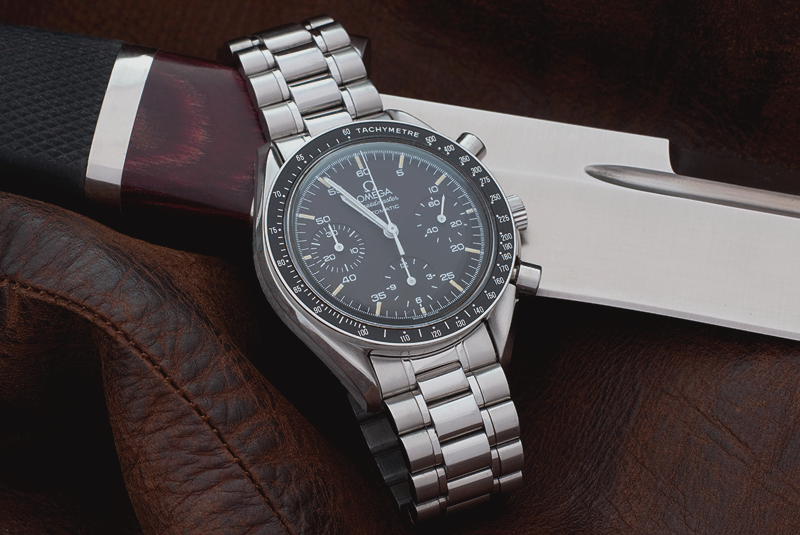 It is very easy to identify most watches with an add-on module chronograph (or piggy back movement). Look at the side of the watch, where the pushers and crown are located. You will find that there is a mis-alignment between the horizontal position of the pushers and the crown. The pushers are positioned a bit higher than the crown, as the chronograph module is on top of the base movement. It is not a bad thing though, and I have never heard of any real issues with the Speedmaster Reduced to be honest. Other brands, even a high-end brand like Audemars Piguet, also uses this add-on module technique for some of their Royal Oak Offshore chronographs. 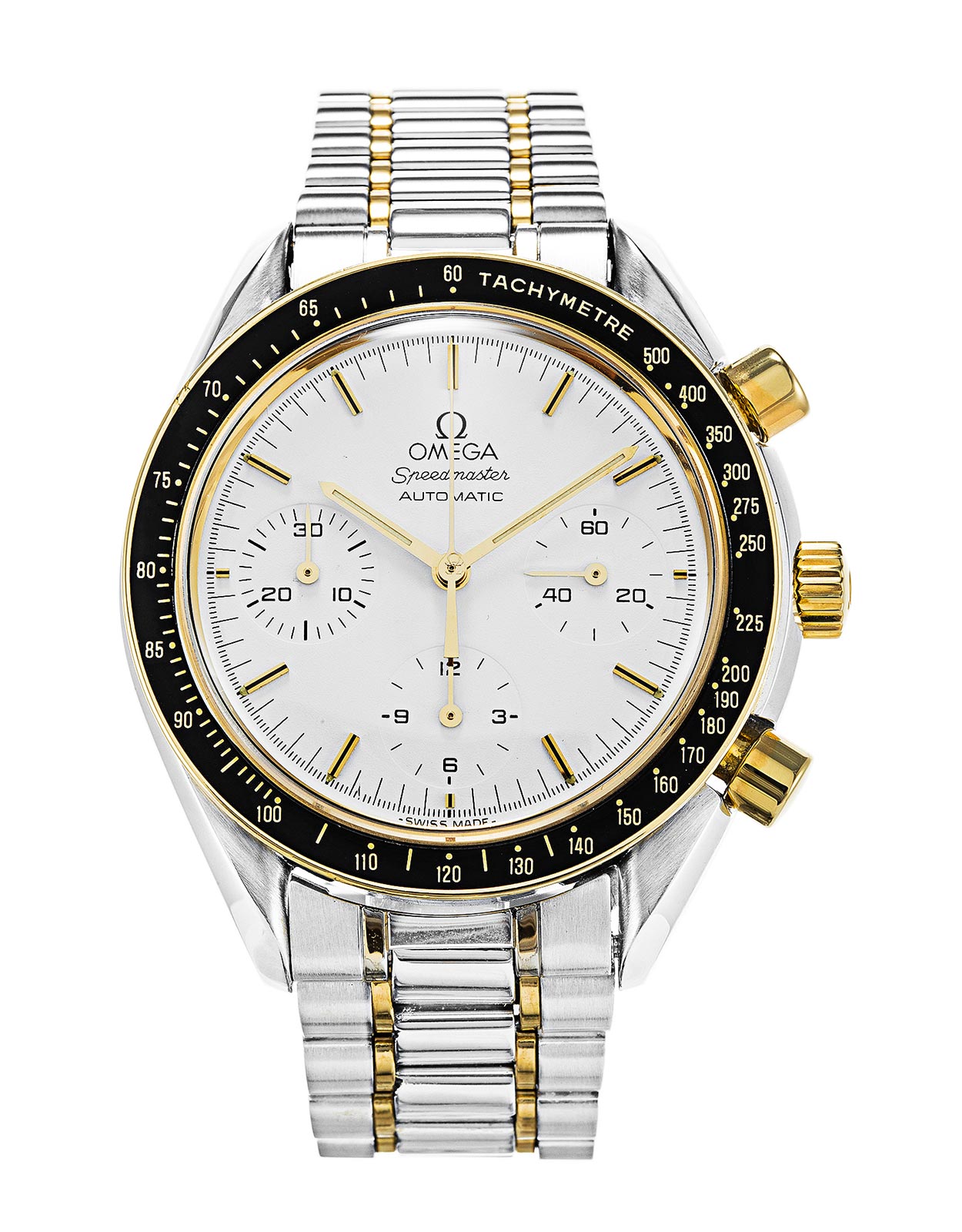 The above bi-color model (reference 3310.20) dates from the early 1990s and is – besides the configuration of dial and bi-color – identical to the 3510.50 references. This model can be found here, at WatchFinder.

When the Speedmaster Automatic models with Co-Axial movements (like the Broad Arrow with 330x movement) came to the block, the Speedmaster Reduced was quickly phased out.

Like I wrote in the beginning of this article, the Speedmaster Reduced is becoming more popular in recent years. Perhaps still because of the fact that people don’t fancy a 42mm watch all the time or don’t like the idea of having to wind your watch manually, but times that you could find one for a few hundred Euro are long gone. Reference 3510.50 models after 2000 do fetch just below 2000 Euro. You can find them starting around 1200 Euro, but these are often mid-1990s models and not always with the box and papers still there. Special versions with a panda dial, all-white dial (reference 3810.20) or the Japan special reference 3510.82 with blue dial for example (here) might fetch more. But you can still find interesting examples for relatively low money. An interesting one is this white dial Speedmaster from 1991 with silver sub dials. Just In Time Watches in Italy has this one for sale for 1490 Euro (click here). 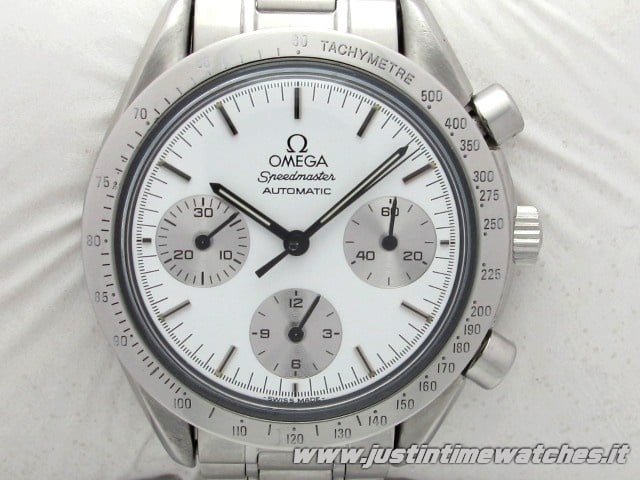 Is the Speedmaster Reduced worth collecting? I don’t foresee that these small sized automatic models will become as collectible as the Speedmaster Professional ‘Moonwatch’, but with the ever-increasing prices on those (especially vintage models), there might be a time that people will start looking for more affordable alternatives. Not specifically collectors perhaps, but people who want to have a Speedmaster as their daily companion. Versions like the Schumacher Racing models or the model pictured above might become more sought-after over time. Until then, you should be able to pick them up for a very reasonable price.

Thanks to Thirtyfivemill.com for the image of the black dial Reduced.