In response to the wilder end of the horological spectrum getting wilder still throughout the pandemic, the true entry-level bracket is taking pains to develop in turn. It’s a well-known phenomenon that during times of crisis, the gaps between the richer and poorer people and elements of society broaden further. Thus, it is hardly surprising that watchmaking reflects the world in general. More and more brands are hoping to tap into an ever-growing market of first-time buyers who have had their heads turned by industry classics like the Omega Speedmaster that remain frustratingly over budget. Sternglas has not missed its chance to act. The Tachymeter chronograph joins the lineup, offering something new for both fans of the brand as well as newcomers to the watchmaking scene.

What we have here is a couple of modest but nicely designed quartz-driven chronographs. Inside the 42mm stainless steel housings, you will find the Miyota 0S20 caliber, which is a standard quartz chronograph movement. While many new brands trying to crack this price segment opt for meca-quartz calibers, distinguished by their “sweeping” chronograph seconds hands, such a movement tends to add a little bit to the retail price, all things being equal. 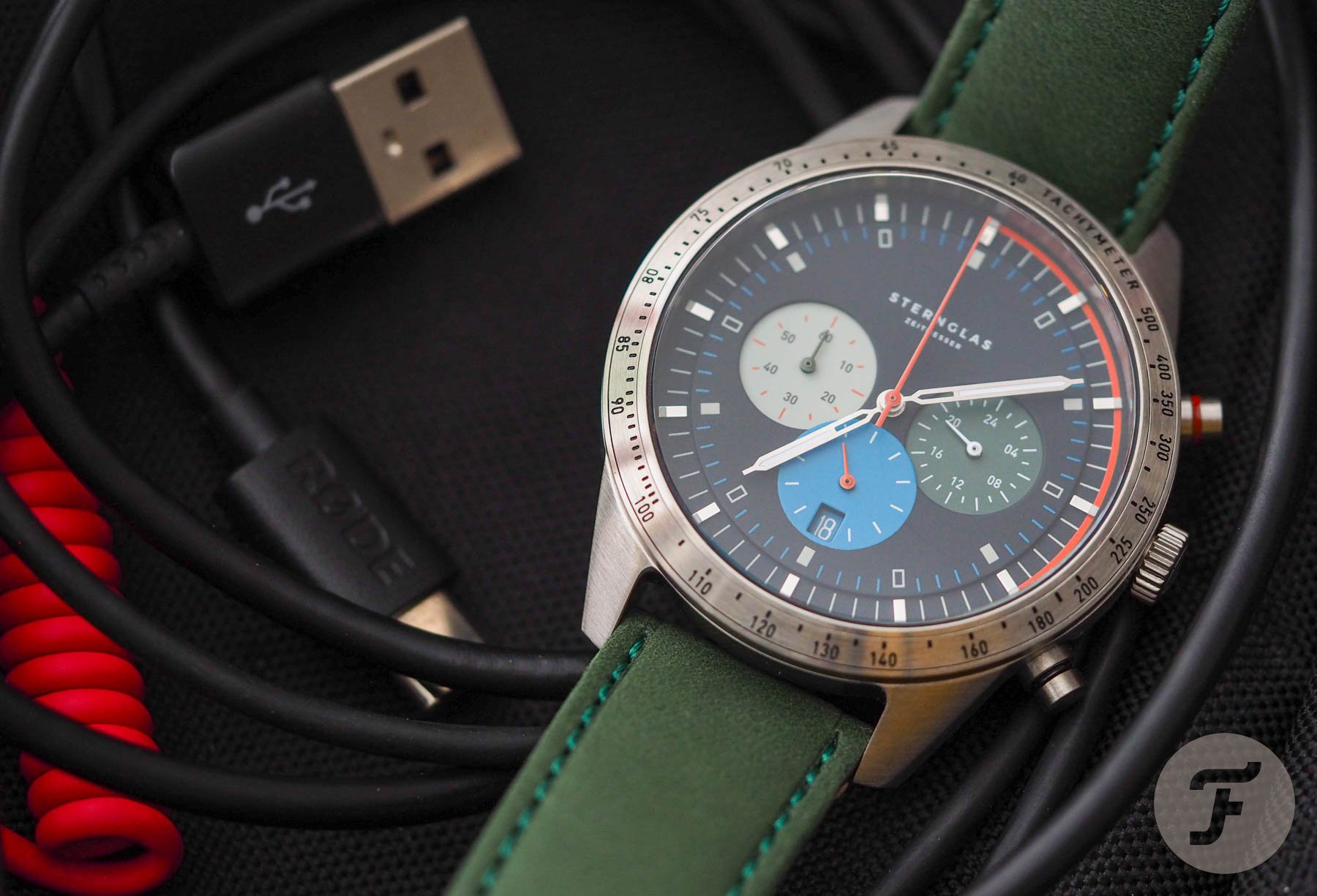 Speaking plainly, the difference in cost between a regular quartz chronograph and a meca-quartz is really only about €5–€10 when bought in volume. But when you factor in the associated costs with any kind of watch production, that would become about a €20–€40 increase on the retail. While this might sound like nothing, it would, in this case, represent a price jump of around 10% on these pieces, pushing them close to or over the €300 mark. Staying below that line makes the Sternglas Tachymeter seem like incredibly good value. 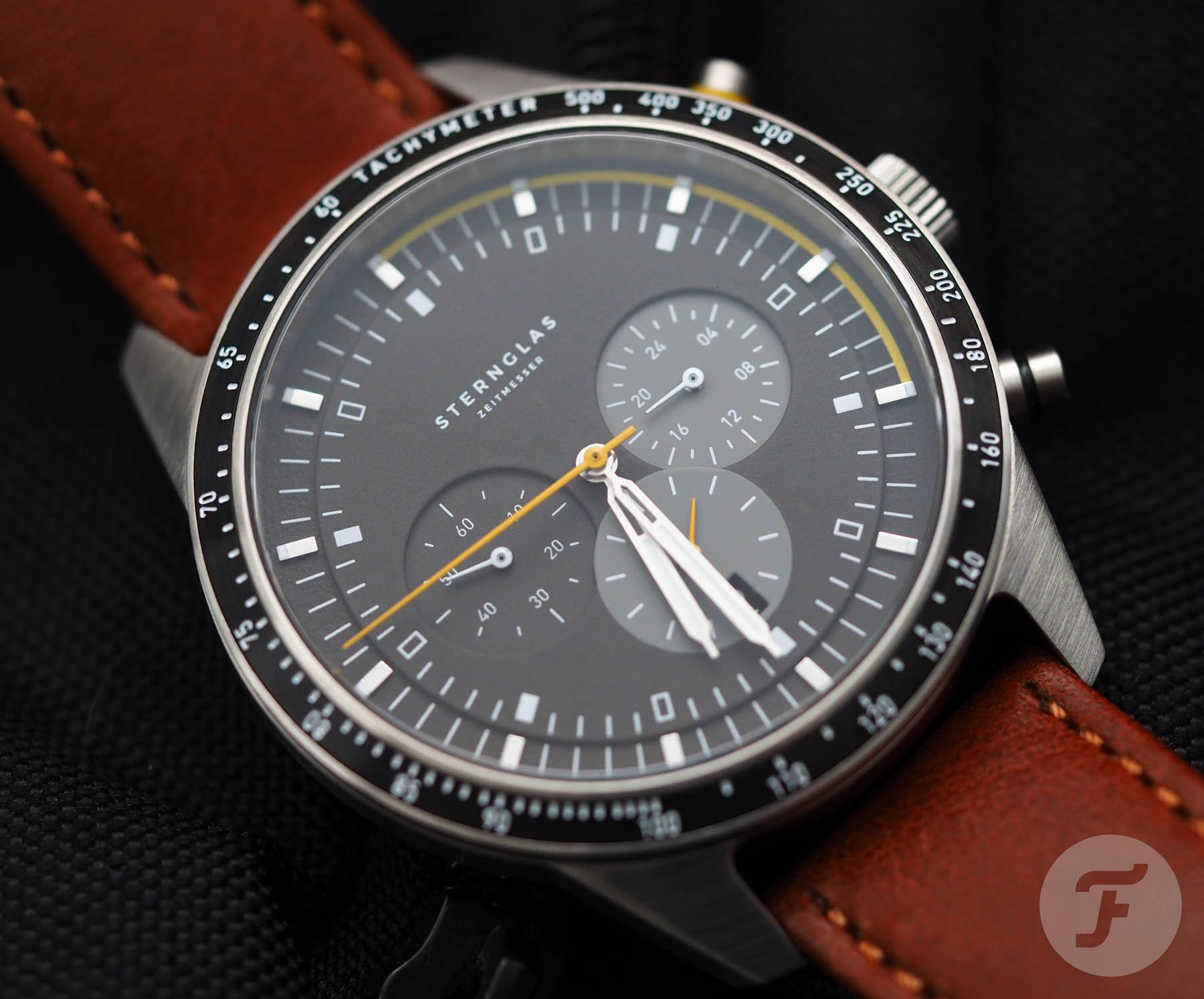 Are they good-value watches?

To be frank, yes, these watches do represent good value in terms of design, functionality, and small-brand cachet. While you can buy loads of alternatives from more established brands (especially Japanese behemoths like Citizen, Casio, or Seiko), Sternglas has a certain “Euro-cool” by virtue of it being headquartered in Hamburg, Germany. Sure, at this end of the brand’s collection, there isn’t much “German” about the product itself other than its design and soul. But those things are certainly worth paying for if they inspire some kind of reaction in you, or if you’re hoping to kickstart a younger collector’s passion for European watchmaking. 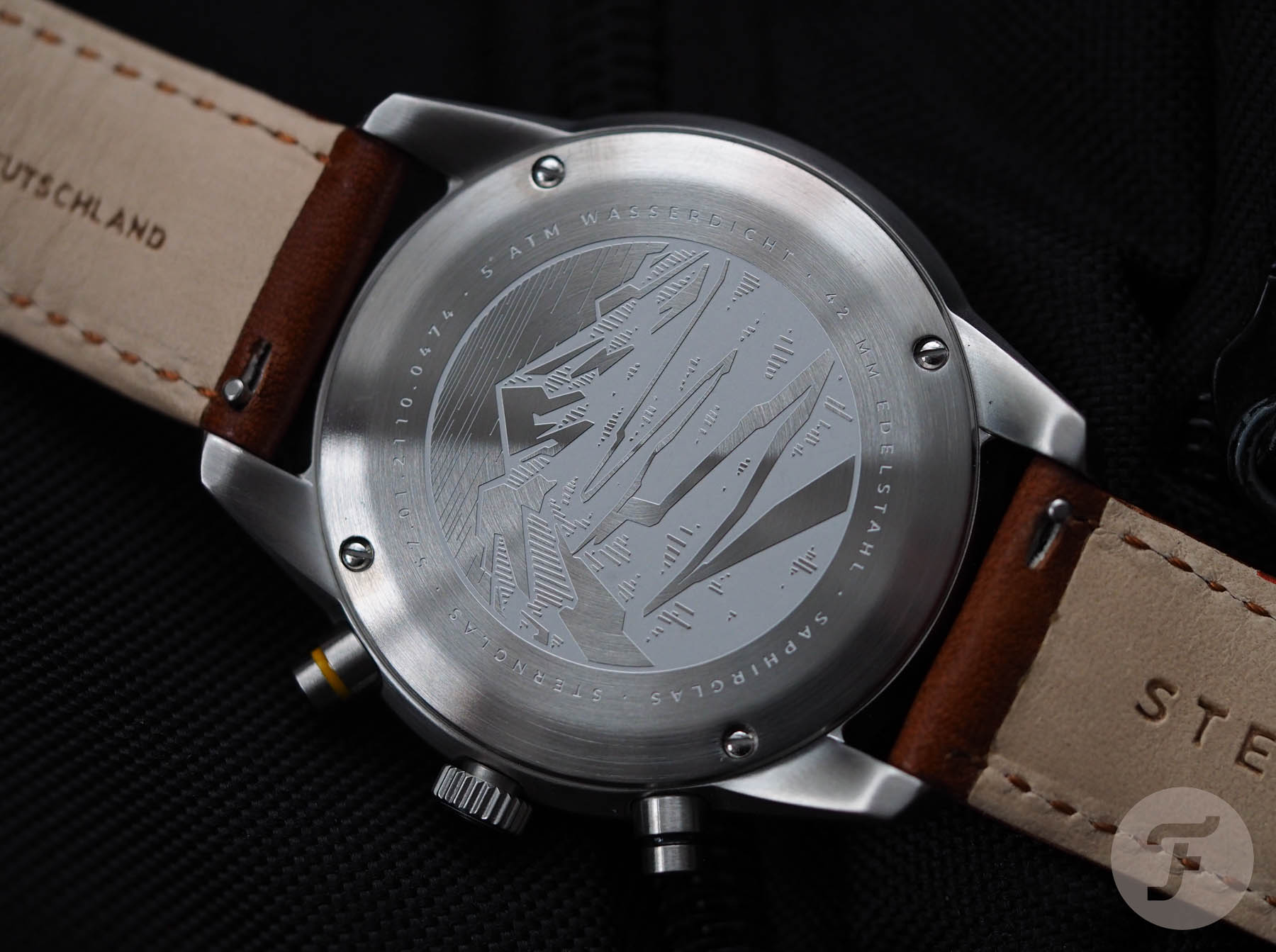 Colorful but not over the top

I like the way Sternglas has approached this pair of designs. I think I respect the more colorful “blue-red” model on the green strap, but would probably lean towards the “anthracite-orange” simply because it is a bit quieter, more versatile, and seems more serious to me. However, I love gifting Sternglas watches to my friends’ children, in whom I’m trying to sire an interest in horology (because if our generation doesn’t make the effort to pass on our passion, the up-and-coming would-be watch aficionados might turn their heads toward more digital playgrounds). In that light, the blue-red is easily the better model. It has a charming youthfulness to it. It seems more sporty. With the colors neatly interacting with the “complex” dial, it has a lot of reasons to pull its wearer back in over and over again. 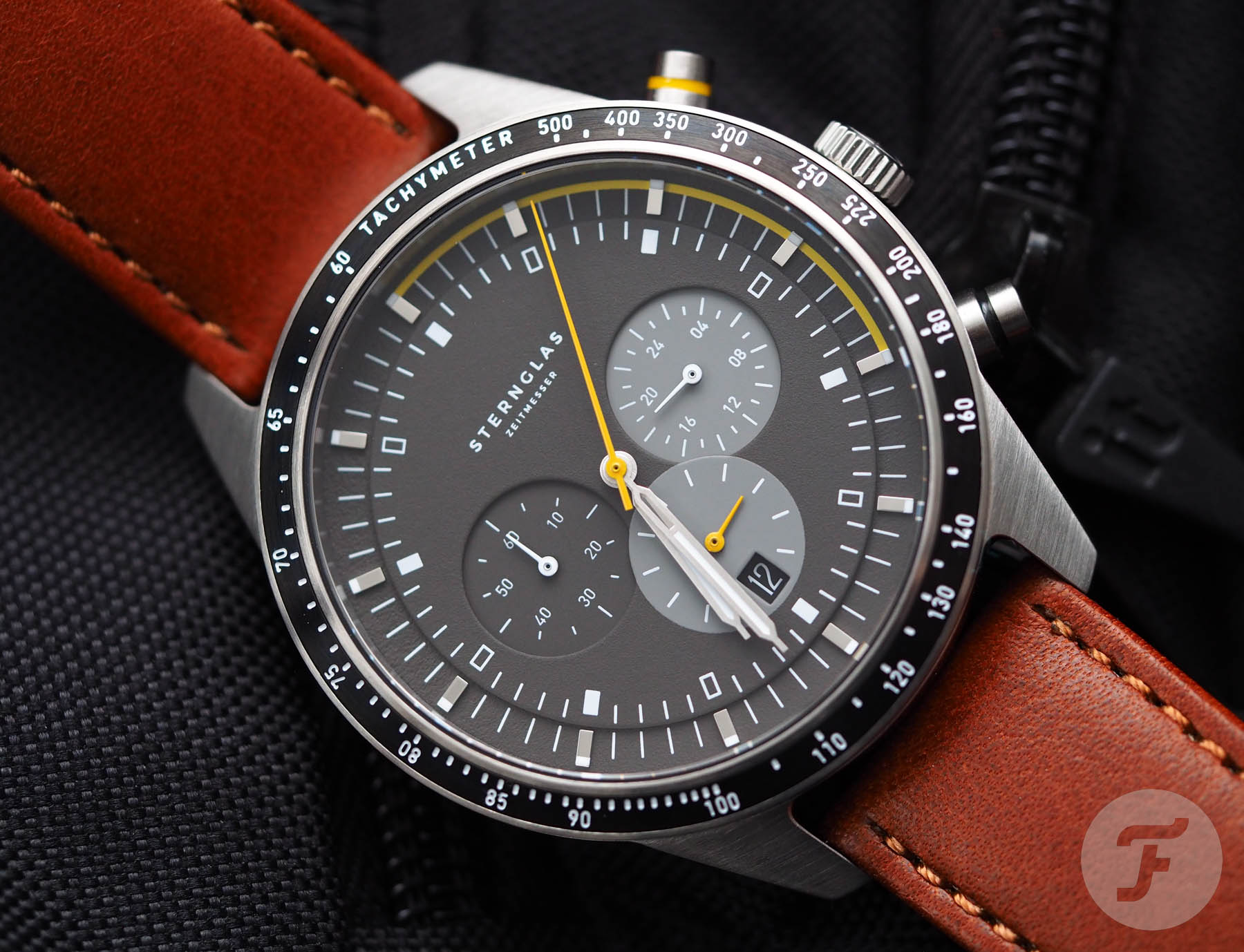 Is that really orange?

One thing I have to say is that the “orange” of the “anthracite-orange” model is (to my eyes, at least) clearly yellow. I’m sure that won’t make a bit of difference in whether you like the watch or not, but I just wanted to get it down in writing in case you think I’m crazy for dubbing it orange. Maybe I’m more colorblind than I thought, but I’d be willing to bet the majority of you will also see yellow here. Let me know in the comments below. 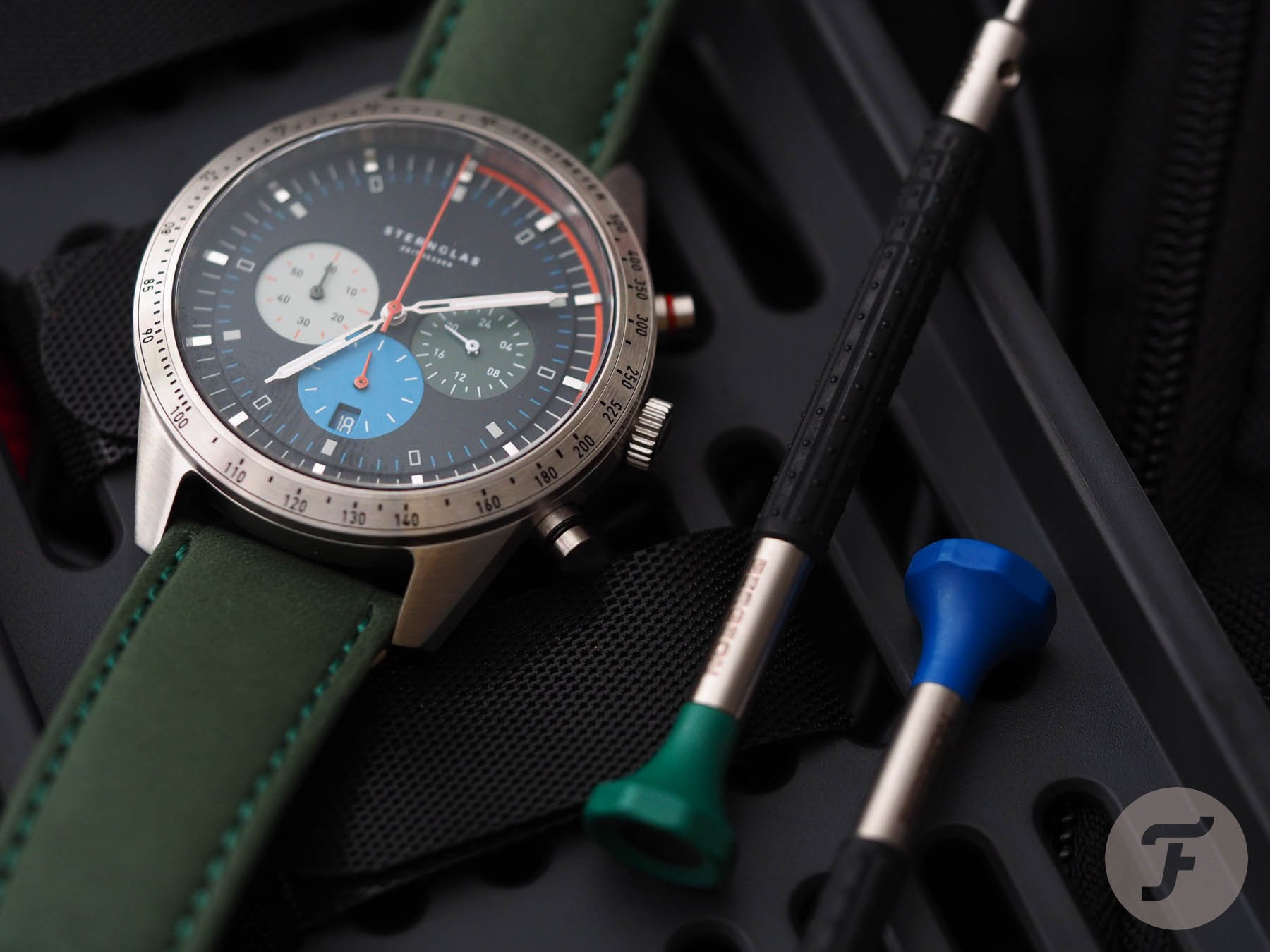 The price is right

These days, €269 for anything in the watch industry is pretty good value. A friend of mine recently bought a Rolex Sky-Dweller. When he did, he received some Rolex aftershave as a gift. Apparently, he tells me, these aftershaves sell for about €300 on eBay. So, with that budget, you have the choice of smelling like desperation and scarcity or owning a Sternglas Tachymeter. Honestly, if Rolex would be kind enough to let me buy a watch I actually want and I received that aftershave, I would flog it immediately for the cash. I would then use that money to buy something like a Sternglas Tachymeter to give away, which I hope would rebalance my karma after stiffing some poor, gullible sap out of €300 for aftershave made by a company that can’t even smell the global discontent its policies cause to fester. 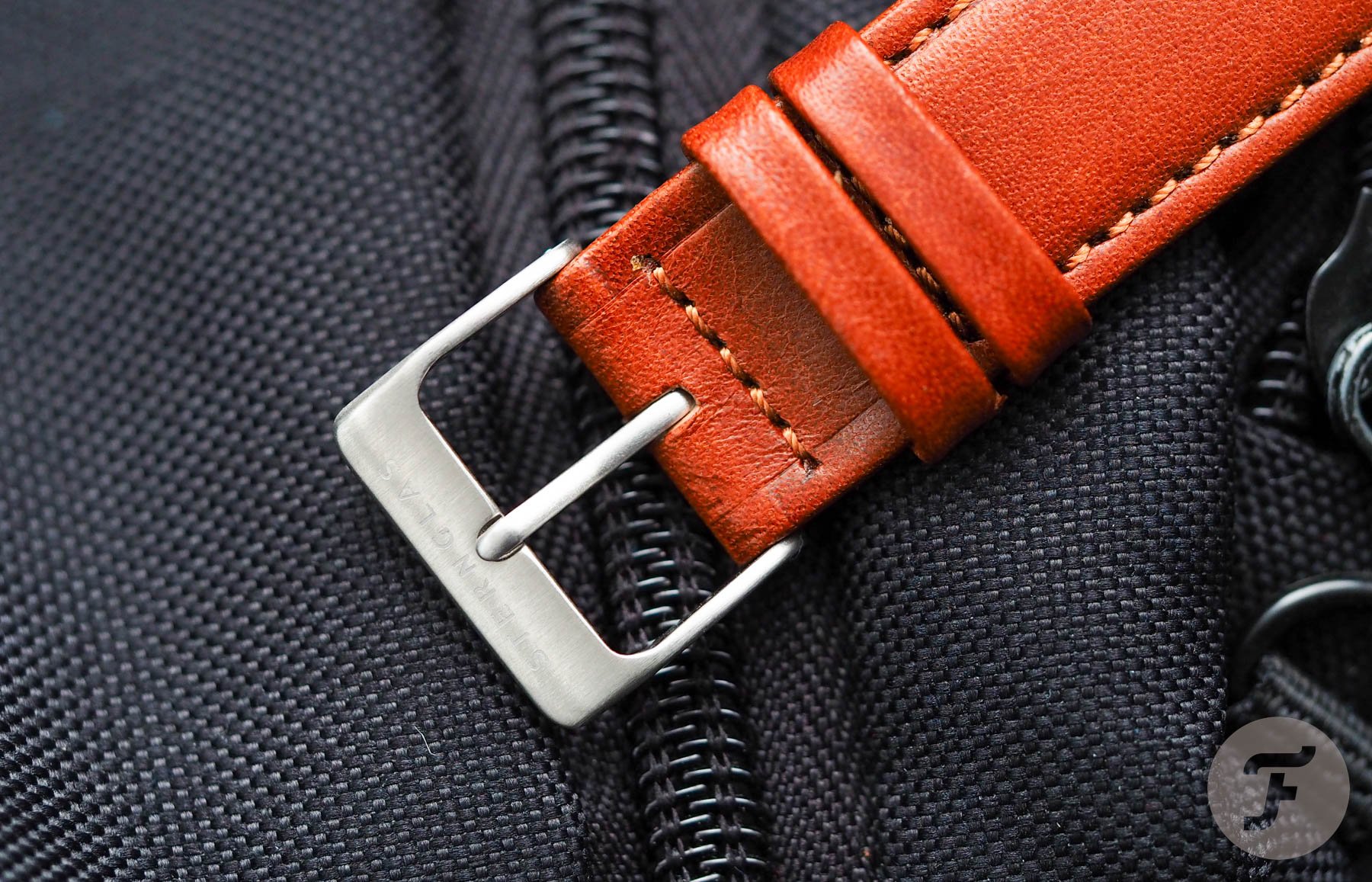 I found the name funny the first time I read it. It’s almost like calling an Oyster Perpetual the “Rolex Time”. It’s cute. Perhaps it nods to the fact that with a €269 price tag, there was no budget left to hire anyone to come up with a “cool” name for it. Although I’m obviously joking, I actually find the name charming. This is a watch that does what it says on the tin. It is straightforward and uncomplicated. With a 10mm thickness, a 50mm lug-to-lug, and 50m water resistance, it’s perfectly sized and sufficiently tough to be worn on a daily basis. Its classic fusion of sportiness and demure class means it could easily operate as a one-watch collection for the budding watch lover. 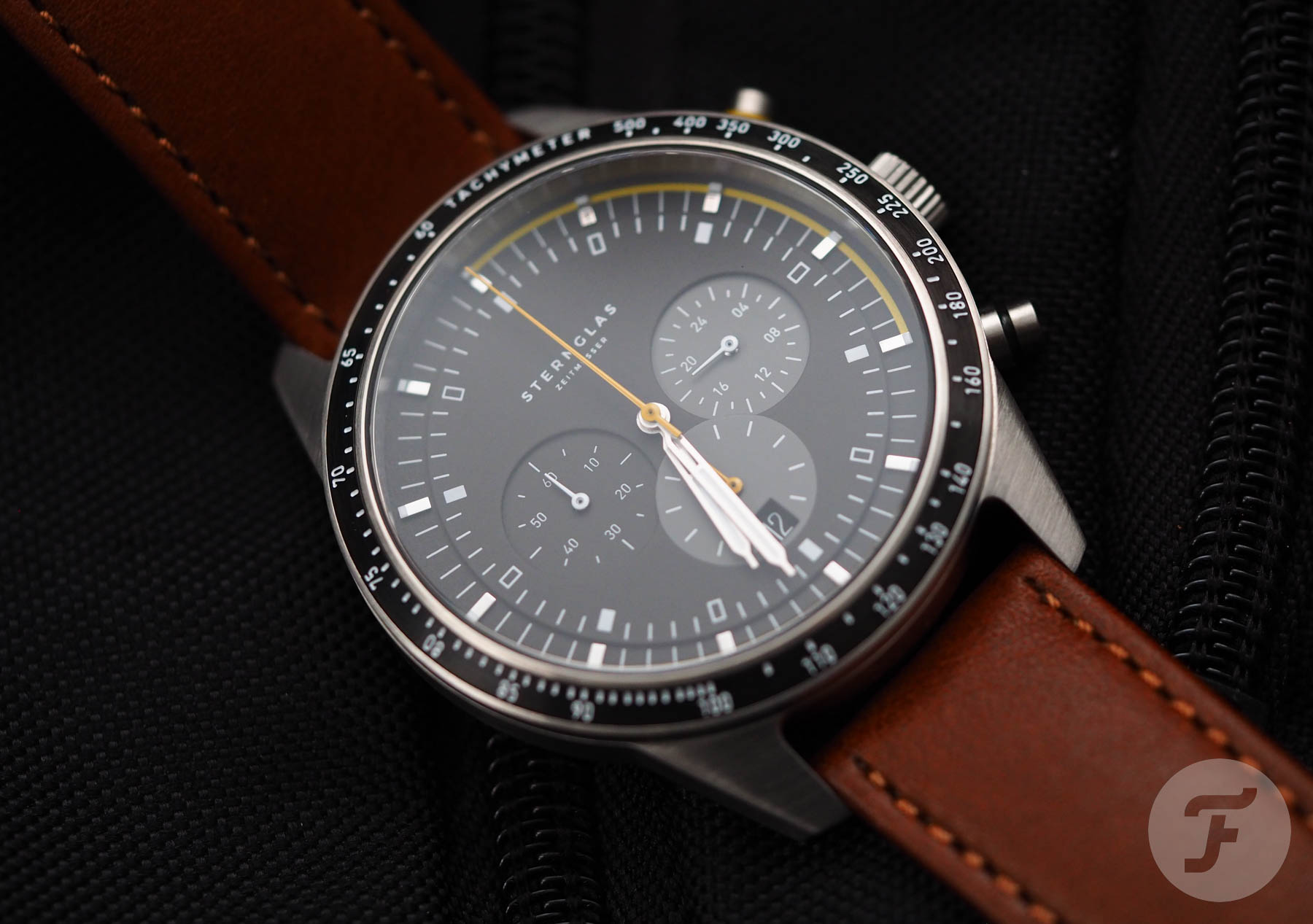 I wouldn’t change anything about the design of these watches except for one thing. While I was reading about chronographs a few weeks ago, I stumbled across an uncommon execution of the tachymeter scale on an old Heuer Autavia. Instead of the scale starting at “500” as it does here, the scale’s highest number was the “200” located around 4 o’clock. Following the “60” at 12, the scale continued all the way down to “50”, which sat at the 12-second marker. 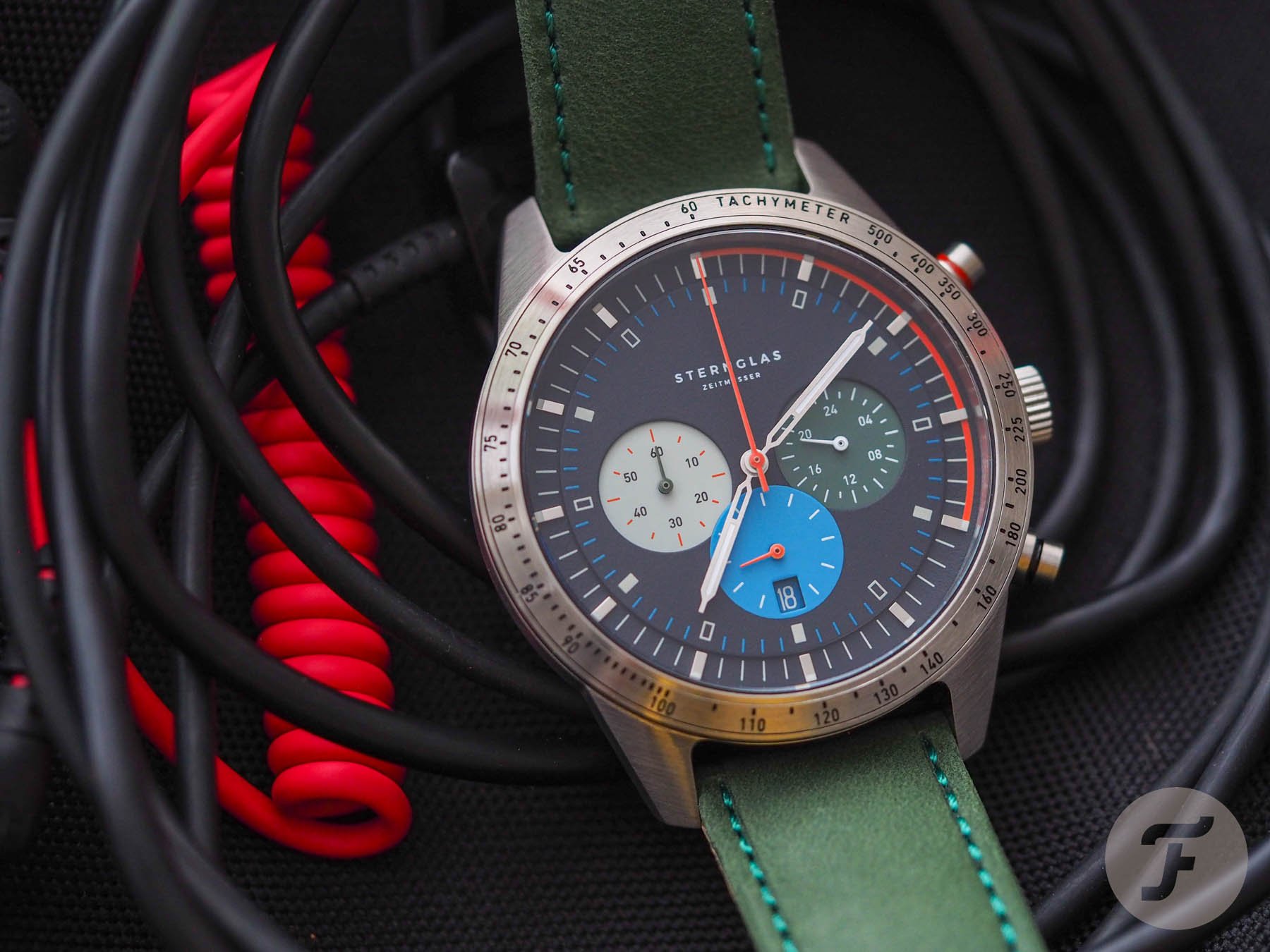 I think this is far more useful for a chronograph. Very few things travel at 500 “whatever unit you’re measuring with your tachymeter,” and even if whatever it is you’re timing is moving or being produced that quickly, you can’t get a very accurate readout at all at that rate. I mean, is it 510? 504? 490? Extending the scale further to show more realistic speeds makes sense to me. I’d love to see brands do that more often. Learn more about these affordable chronographs on Sternglas’s official website.

Hot Topics
Introducing: The New Seamaster Professional 300M 60 Years Of Bond — With A Special Animated Case Back
105 comments
Are You Still After An Omega × Swatch MoonSwatch?
85 comments
It’s Time To Invest In A Dress Watch — Our Picks From Breguet, Omega, Grand Seiko, And More
72 comments
The Rolex Waitlist Conundrum — How Much Will The Price Of Your Watch Increase While You Wait?
50 comments
The Best Omega Speedmaster Watches Of 2022
40 comments
Popular
Rolex Submariner Hulk versus Seiko SLA019 : Shades of Green
Michael Stockton
27
Speedy Tuesday – Omega Speedmaster Professional 145.022 Buyer’s Guide Part 1
Robert-Jan Broer
14
Hands-On With The Seiko SLA019J1 Marinemaster
Robert-Jan Broer
4