Strap Check: This Artem Straps NATO Is A Perfect Match For My Oddball Breitling Aerospace

There are some watch/strap combinations that are classic, timeless, and with which you can never go wrong. Take, for example, the trusty gray NATO. Gray is a neutral color that pairs well with any steel or titanium watch. Even black DLC or PVD watches look great on gray. A black or brown two-stitch leather strap will also look good on just about anything. And black alligator, overused and boring as it may be, is a perfect match to any dressier watch. But life is too short to stick to classic pairings. Sometimes, going over the top with color, patterns, or texture is the way to go. That, or a strap that perfectly matches and complements the basic color scheme of the watch in question. And that is exactly what I will show you here today.

Not long ago, I was sent a number of NATO straps. They came all the way from Australia and are sold by a brand you might have already heard of — Artem Straps. The brand was made popular by its first (and, until not long ago, only) product — the black sailcloth strap. These straps were highly praised and regarded as a perfect alternative to expensive OEM straps from brands like Blancpain and Omega. Though, in my opinion, nothing beats those brands’ OEM straps, I must admit that for a fraction of the price, Artem was making a brilliant product. Now, the young Aussie brand sets its sights on expanding beyond black sailcloth, offering NATO straps as well as sailcloth straps in blue with a couple of different stitching color options. This NATO is one of those new offerings. 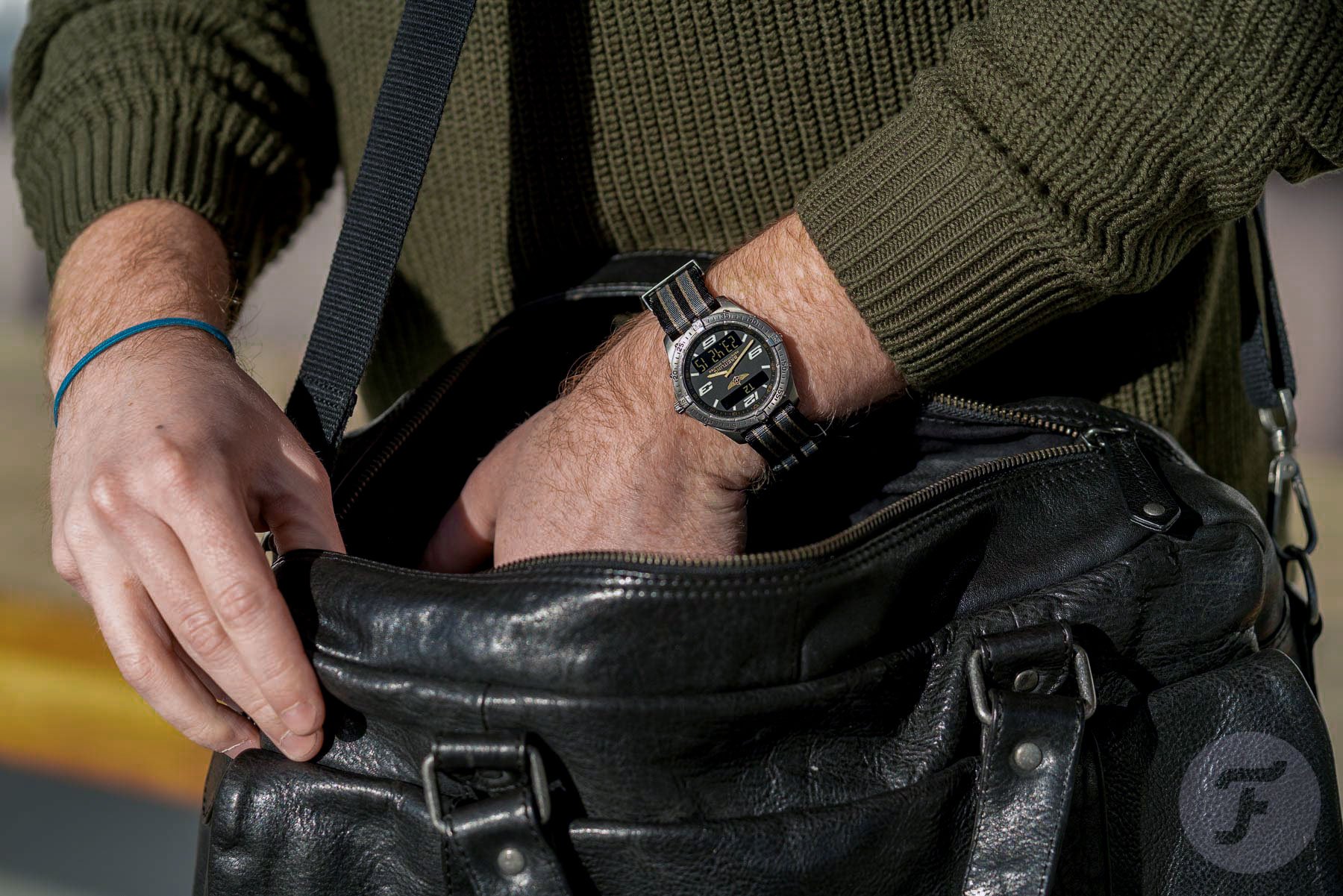 Made for each other

Now that the brief introduction to the brand is out of the way, let’s talk about why this strap is such a perfect match for my Breitling Aerospace. This is a watch that I added to my collection at the end of 2021, and which will get a more formal introduction later on this year — we’re still honeymooning — so I won’t get into too much detail about the watch itself. All you need to know for now is what you see in the pictures found throughout the article. The first thing you may notice is how the watch, in its slim titanium glory, is primarily gray, black, and gold. These colors are also the exact combination found on this Artem NATO. And though I know that sometimes over-matching can be a bad thing, that is not the case at all here. 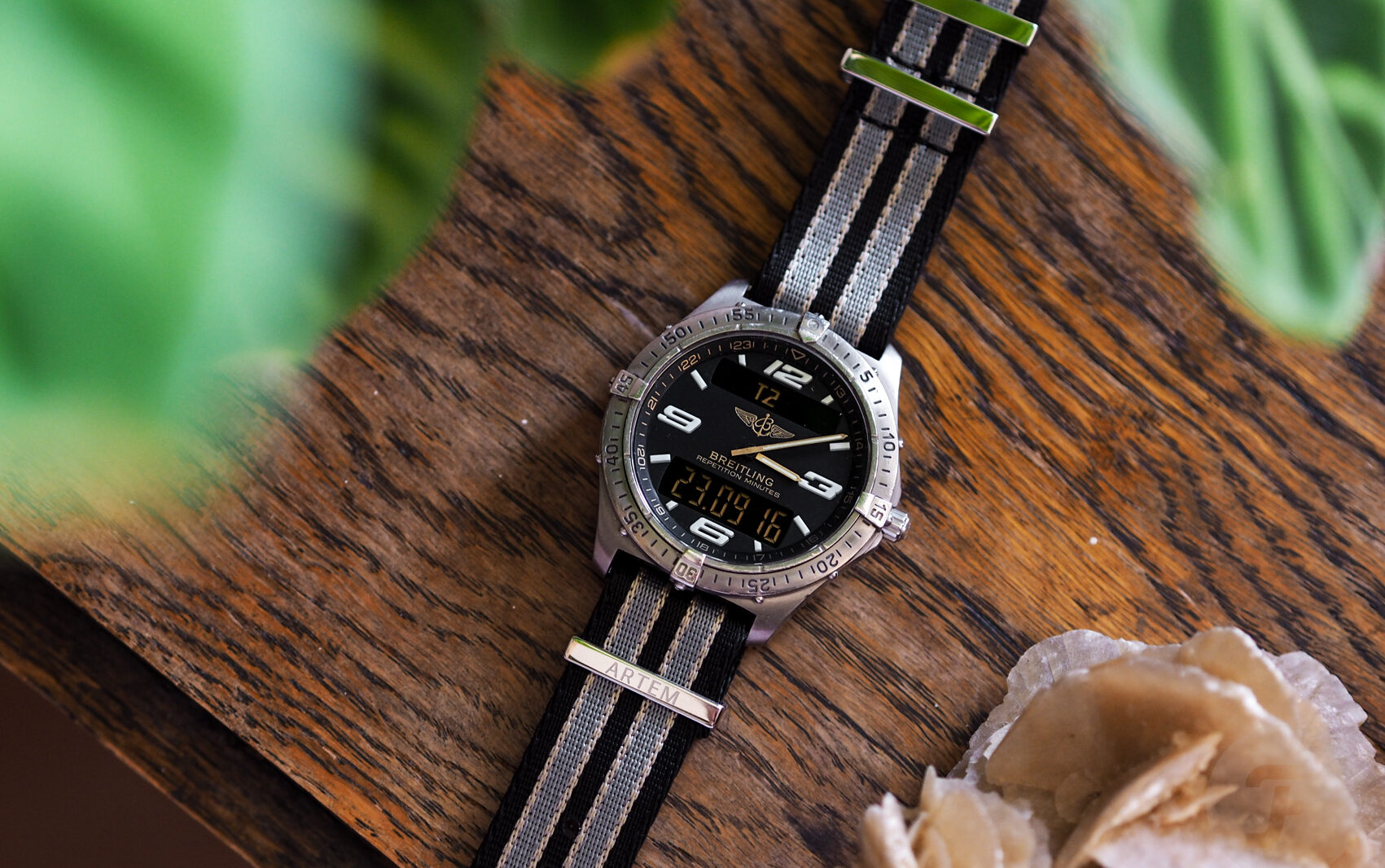 The watch and strap work together in perfect harmony, and not just when it comes to the color scheme. The Breitling Aerospace is a famously slim watch at under 10mm tall. The fact that it’s made of titanium and that it doesn’t house a mechanical movement also makes it incredibly light. This means that it takes a NATO strap brilliantly. The two layers of material that sit underneath do add a couple of millimeters to its height, but it still comes in well below the average thickness of most watches. It’s lightweight, which means that it won’t move around on the wrist, something which can be the case with heavier/taller watches when placed on a soft NATO. And a lot of you will agree that nothing is quite as uncomfortable as a tall, heavy watch wiggling around on a NATO strap. 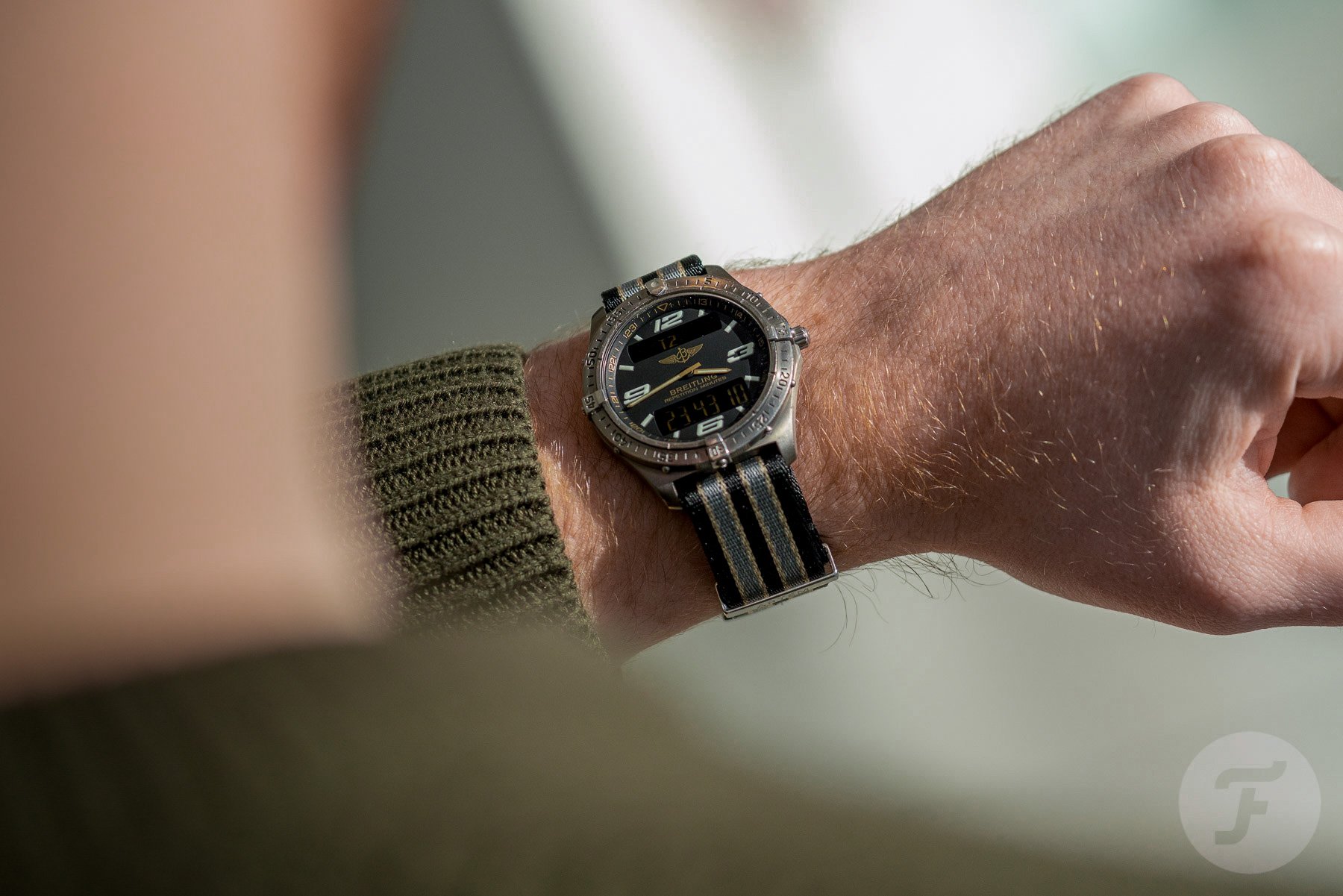 I’ll try not to reveal too much about the watch itself, as (like I mentioned already) I plan on creating an extensive write-up on the Aerospace later on this year. But I will say this: other than my trusty Speedmaster, the Aerospace has taken the lion’s share of wrist time since I bought it last November. Did I ever expect that to be the case? No, not really. I was curious about the watch and had my eye on several listings. One day, it came up in conversation at Fratello HQ, and RJ let me know that he owns one. His blue-dialed Aerospace has already made it to the pages of Fratello, and you can read about it here. The next day, RJ brought it into the office for me to try. It took less than the better part of an hour for me to know that I had to have one. 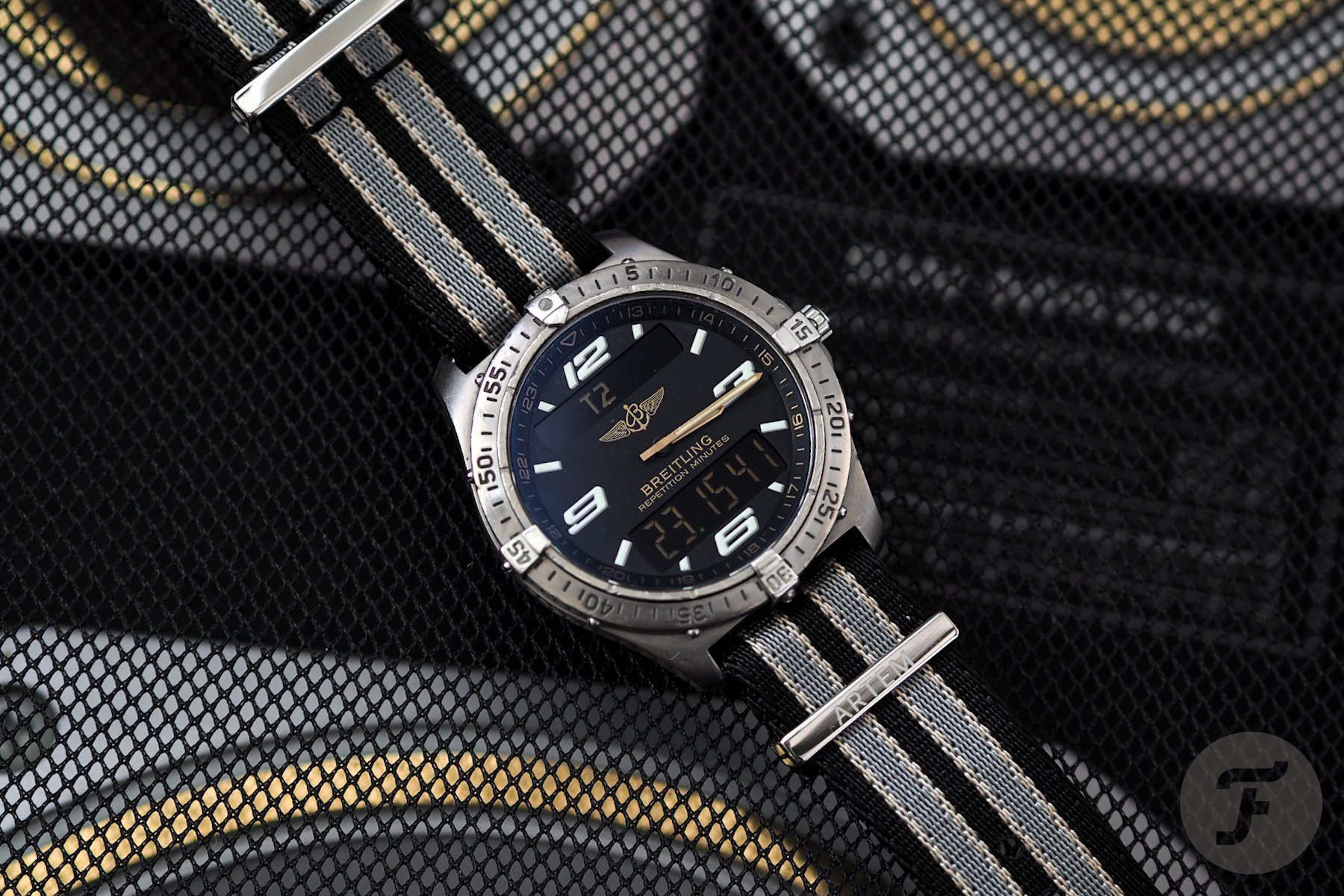 To be honest, I was given fair warning about the idiosyncrasies of the Breitling Aerospace’s titanium bracelet — primarily the fact that it’s a stretchy, jangly affair. Its rattly nature is only amplified by the lightweight titanium. So even before I bought the watch, I knew that it would most likely spend little time on its bracelet. The moment I first saw the black, gray, and gold strap from Artem, I knew there would likely never be a better match for the watch. I’m happy to report, my theory was indeed correct. The strap is what someone would call a “seatbelt-style” NATO. However, as smooth as the material is to the touch, it doesn’t have the shininess that other seatbelt NATOs have. It’s soft, yet tough. Both in terms of construction and materials, it compares only to OEM Omega straps. 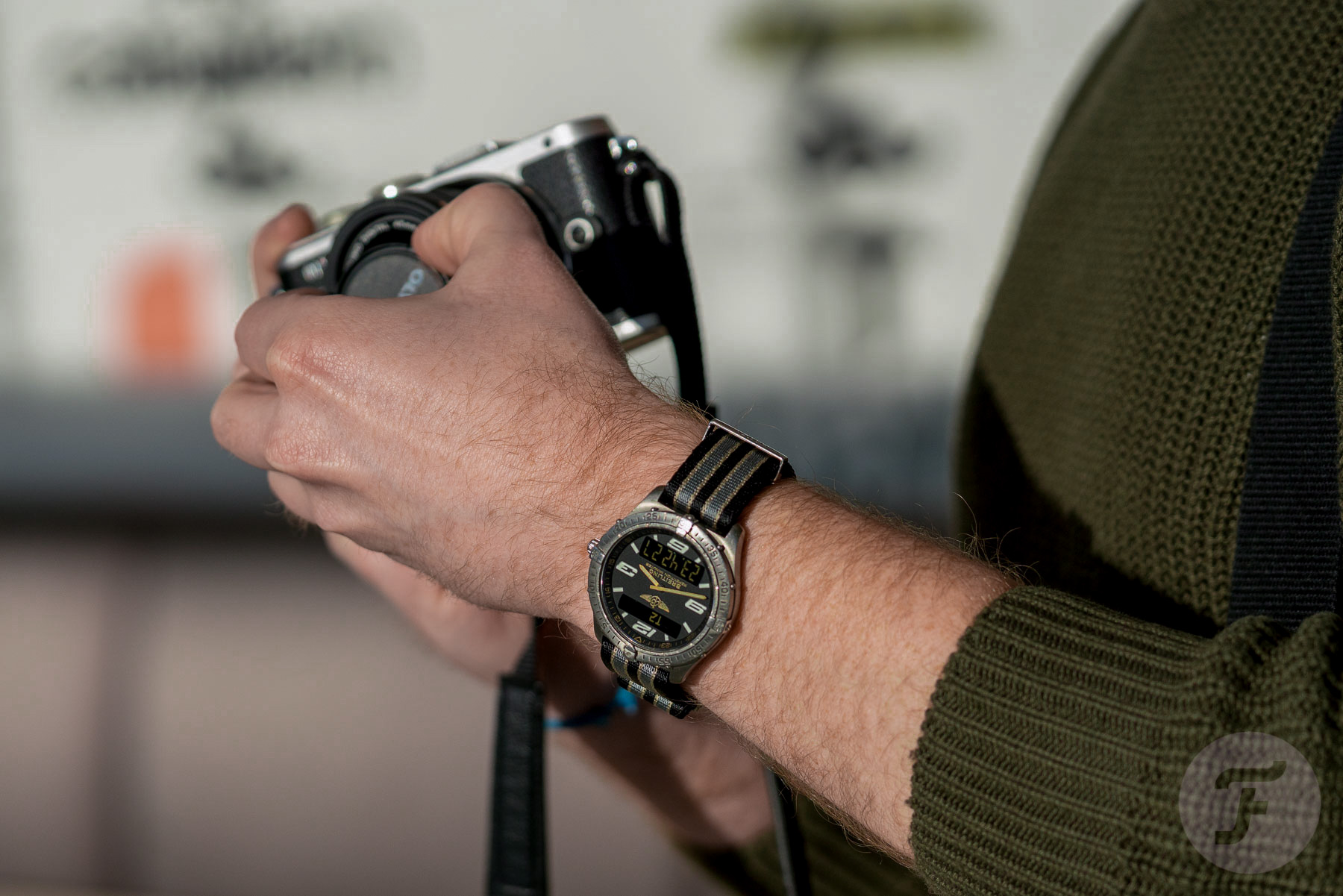 How long will this NATO remain on my Aerospace? Probably quite a while! So far, it has been at least three weeks and no other strap has caught my eye. That said, I always tend to end up putting watches back on the bracelet at some point. And speaking of the bracelet, jangly and light as the Aerospace’s might be, I have actually come to enjoy it. Once on the wrist, it totally transforms. You barely feel the weight of it, and with the right spring bars, there is no rattle on the hollow end links. I think that as winter draws to a close, the full metal jacket will return. But for now, this beautifully matched NATO doesn’t fail to keep me happy.

Finally, as always, I’d love to know what you think of this combination. Is it one you would go for yourself? Or is it too “matchy-matchy” for your tastes? Also, do you have any suggestions for what you’d like to see the Breitling Aerospace on next? Stay tuned, as I’ll be telling the story of this somewhat unusual watch in the not too distant future. For now, if you like the strap, head on over to the Artem site to see the full range, and remember to tune in next week for another installment of Strap Check!

Hot Topics
Laventure Automobile Chronograph With A Proprietary Movement — Marking A Huge Leap Forward For One Of The Industry’s Most Promising Brands
155 comments
Fratello Exclusive: An Inside Look At The MoonSwatch Production Facilities
75 comments
Selling Your Watch To A Dealer Or Trading It In — Tips From A Former Watch Dealer
49 comments
Summer Splash — Round 2 : Jorg’s Tudor Pelagos FXD Vs. Lex’s Hublot Big Bang Integral Ceramic Sky Blue
47 comments
The Top 10 GMT Watches Right Now — From Ball, Grand Seiko, Tudor, And More
44 comments
Popular
The Omega Seamaster Diver 300M Returns – On The Wrist Of Daniel Craig
Paul Dezentjé
15
Why Are There No Stainless Steel Rolex Watches Available?
Robert-Jan Broer
119
#TBT Seiko 7549 Golden Tuna – In Love With a Quartz Diver
Michael Stockton
8