If you are keeping track of all the recent founded micro brands and Kickstarter projects, you are probably just as fed up by them as I am. It is difficult to make a distinction between the ones with good intentions and the ones that are just pushing cheap made watches for too much money. That is where we come in, I hope. I’d love to show you a hands-on review of this Stuckx Bull piece that we actually received from the founder. 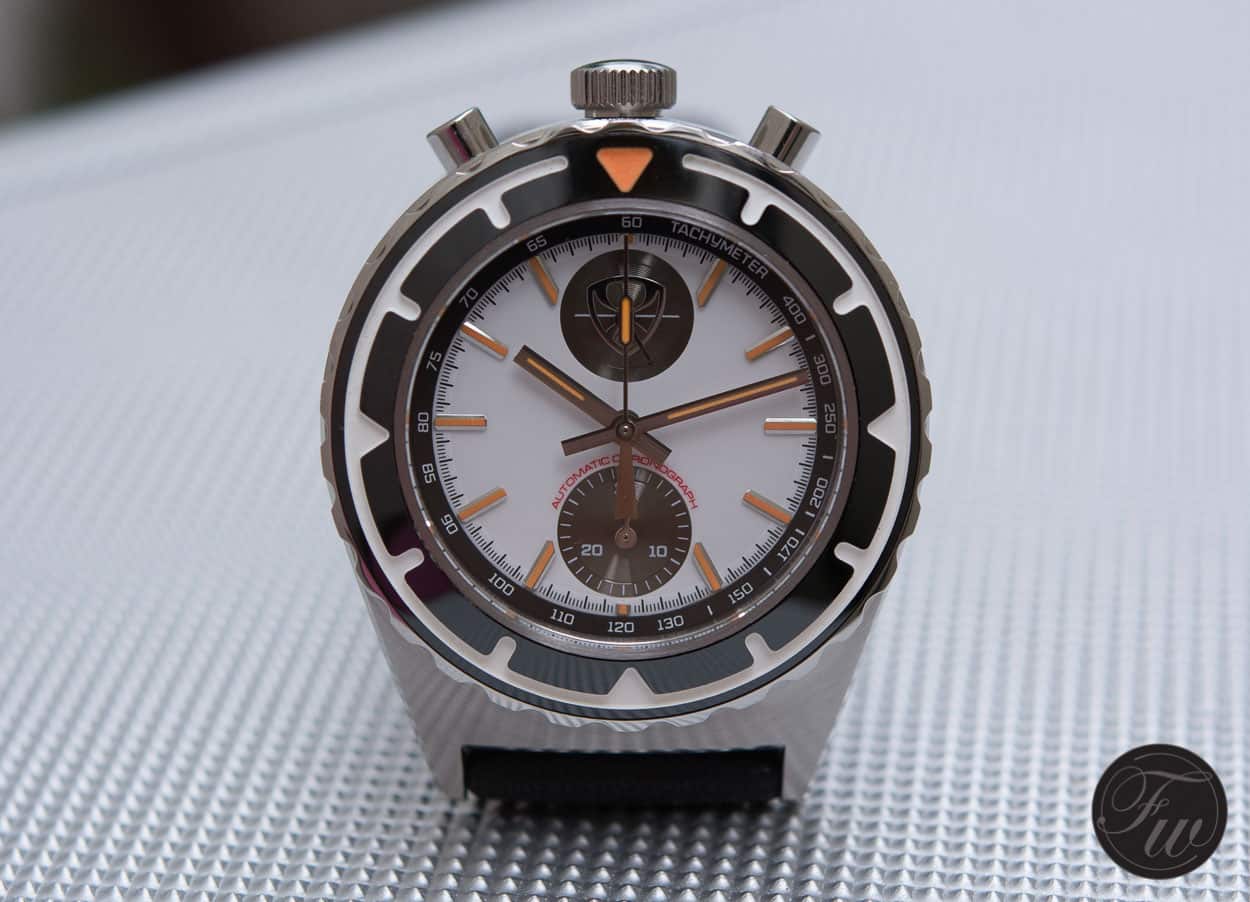 Stuckx is no newcomer, they made watches in the past as well and did successful Kickstarter campaigns. The owner, Stephan Trimbos, is a distributor for a number of micro brands and decided to start his own brand as well. Stephan is passionate about watches, which I learnt when he visited us at our office in The Hague, The Netherlands. Somehow, his enthusiasm for watches (especially micro brands) reminded me of the enthusiasm for new and unknown watches that Ernie Romers (founder of WatchUseek) had (and probably still has).

With all due respect, I am always a bit hesitant to blatantly write-up an article on watches I’ve never seen in the flesh (that’s why we hardly do any coverage on press releases or use stock images). This probably doesn’t do justice for a lot of watches that don’t make it here on FW, but at least I am sure about those watches that do get published. 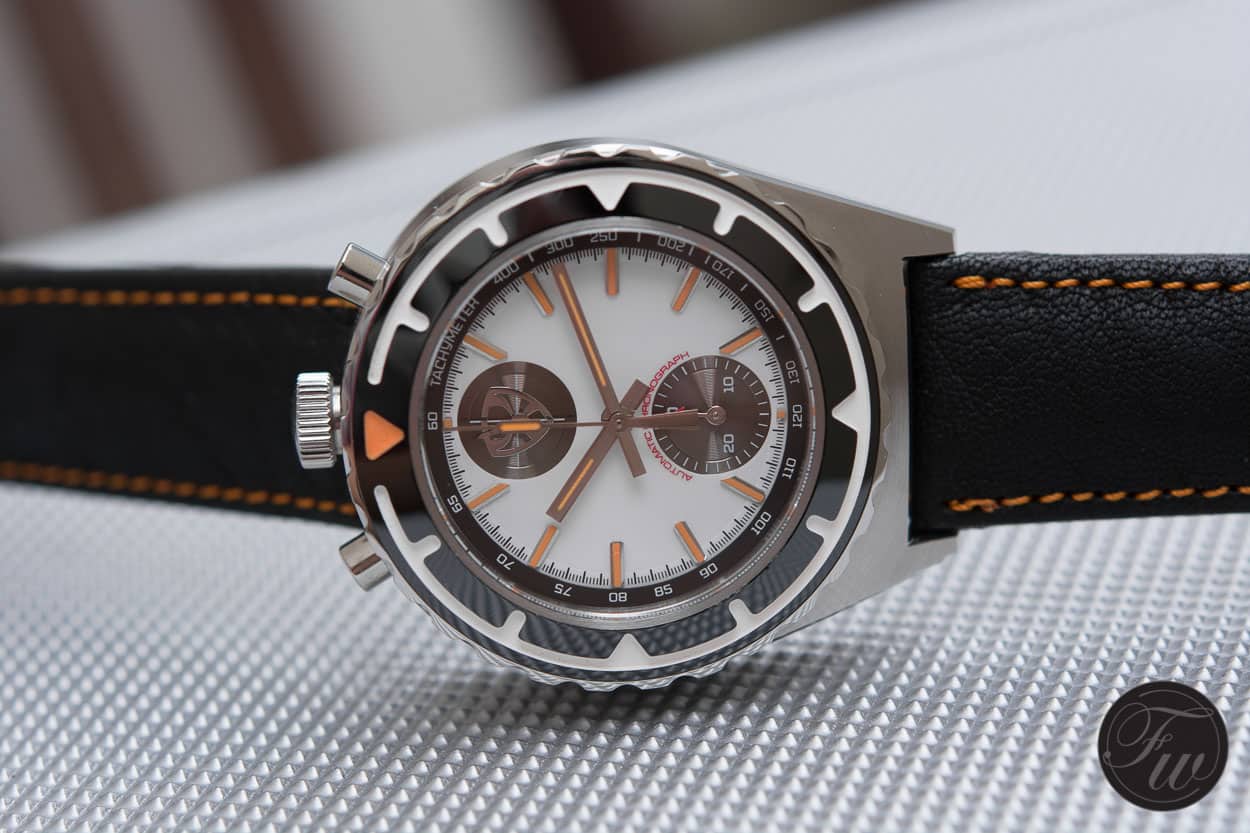 As written above, inspired by those vintage bullhead chronographs from the past. Watches that get a lot of attention and are becoming more difficult to find in decent and authentic condition. Sure, you can spend over $9K USD (retail) on the Omega Seamaster Bullhead which is truly a nice piece or find a nice vintage Seiko Bullhead from the late 1970s for a fraction of that price, but try to find one that is all original (and properly maintained and working!) these days. 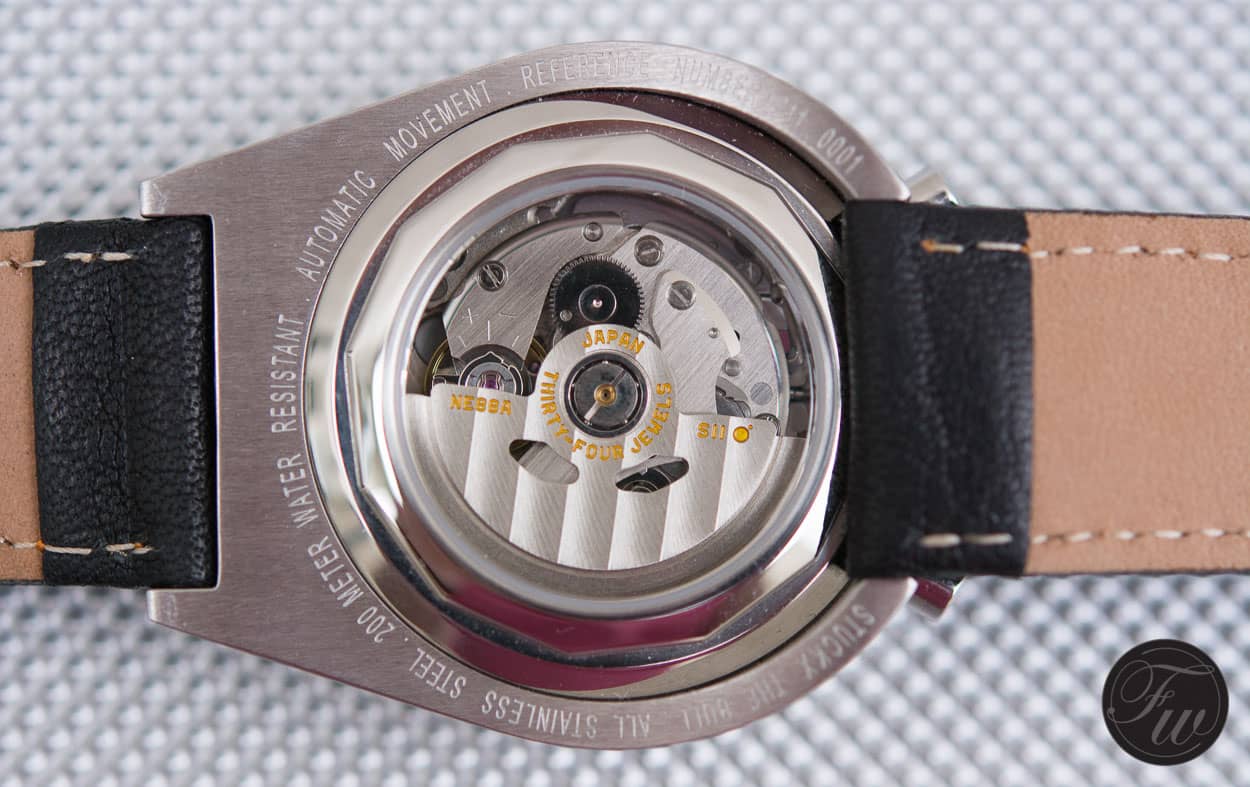 Let me start with the movement of the Stuckx Bull. The image above shows the movement through the transparent caseback. I mentioned that the Stuckx Bull is using a Seiko movement, I need to be more subtle on that. It is basically a TMI movement. However, TMI is the OEM division of Seiko, meaning it was manufactured in a Seiko factory in Japan. You’ll often come across “TMI/Seiko” when people refer to these movements. According to Stuckx, the NE-88 movement is also being used in the Seiko Ananta collection.

The NE-88 chronograph movement has a column-wheel mechanism for a buttery soft operation and it also uses a vertical clutch that will prevent the chronograph second hand from ‘jumping’ when it is being started. A lot of chronograph movements use this mechanism today. This movement is by no means cheap, and is an interesting aspect of the Stuckx Bull, besides the bullhead design.

On the image above you will see the finish of the movement, nicely Côte like finish on the rotor and a brushed finish on the movement itself. I have written here very often that I am not necessarily a fan of transparent casebacks, but I can see the fun of it with this particular watch as well. The crystal used for the caseback is made of mineral (no sapphire), as these are typical aspects to keep the price down (and thus affordable). To be honest, what damage (scratches) can it get when on the wrist all the time? Just be careful where you put the watch when you are going to swap for another watch or when you take it off your wrist at night. 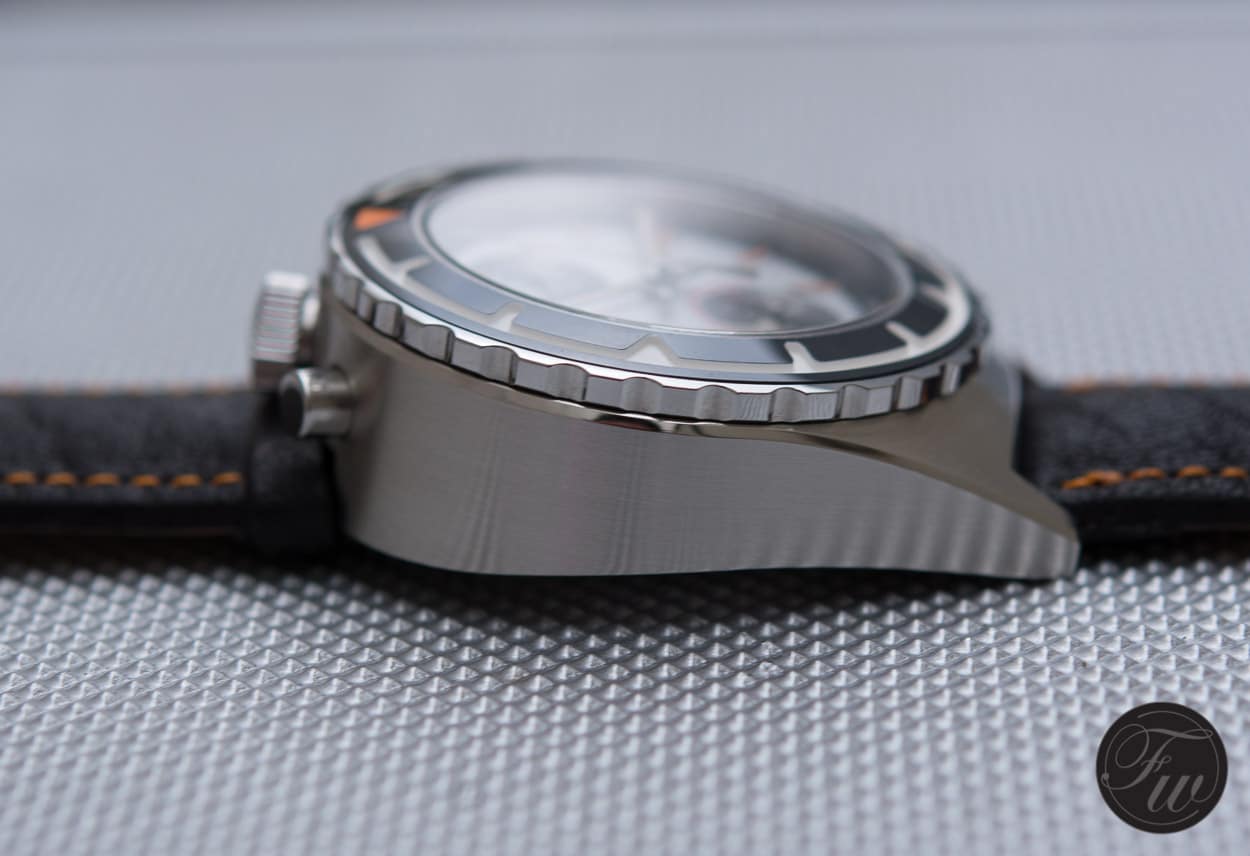 As you can see, the design of the Stuckx Bull ‘bullhead’ watch is based on that of those typical racing driver watches. Although the case will rest nice and flat on your wrist, the dial (and of course movement as well) are placed under an angle so you will be able to read the time without removing your hand from the steering wheel. The crown and pushers on top of the case make it like a stopwatch on the wrist. Quickly and easy to operate. That, in a nutshell, is what the bullhead design is all about.

The case is 42mm in diameter and therefor very wearable, at least for me. The height of the watch is 14,8mm with a nice slope of course. I found the watch to be very nice on the wrist and indeed, useful when having your hands on the steering wheel. It will definitely be a conversation maker, as the Stuckx Bull will attract attention from both watch enthusiasts and non-watch people. 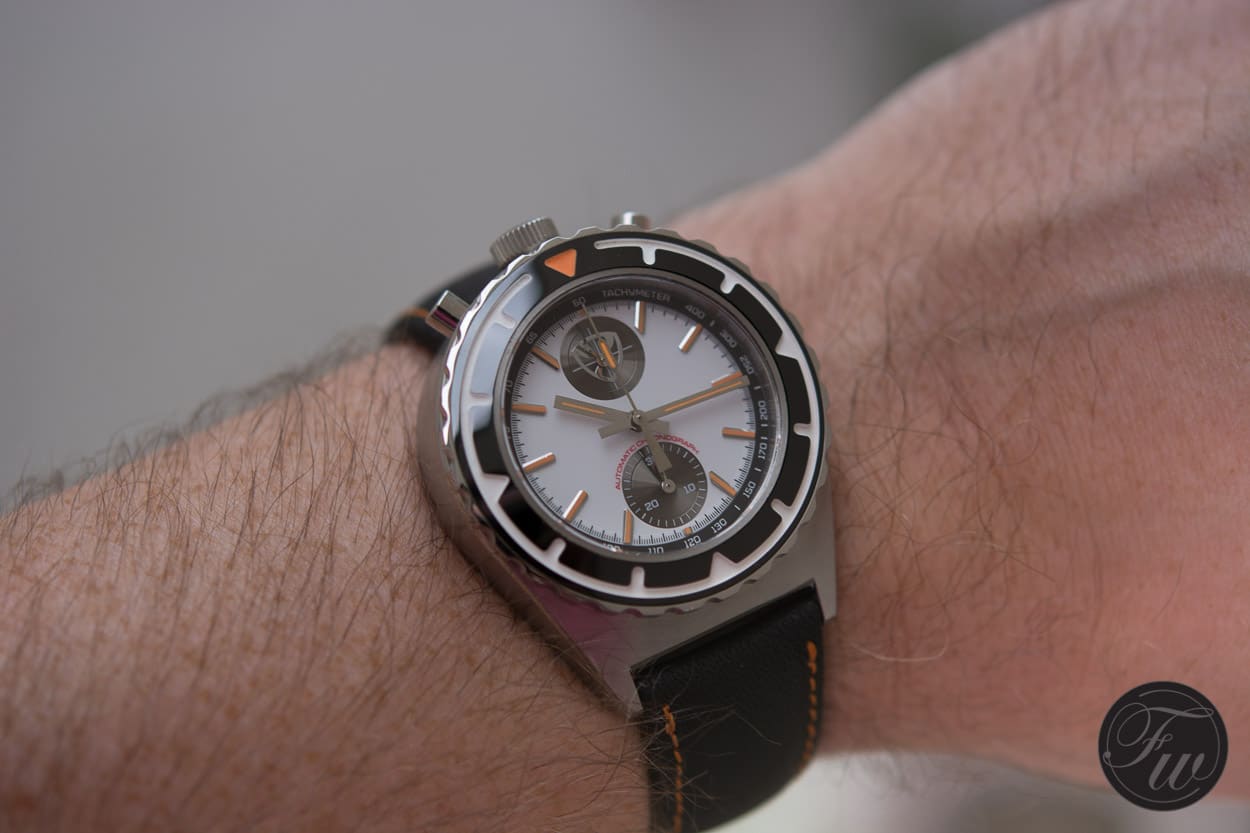 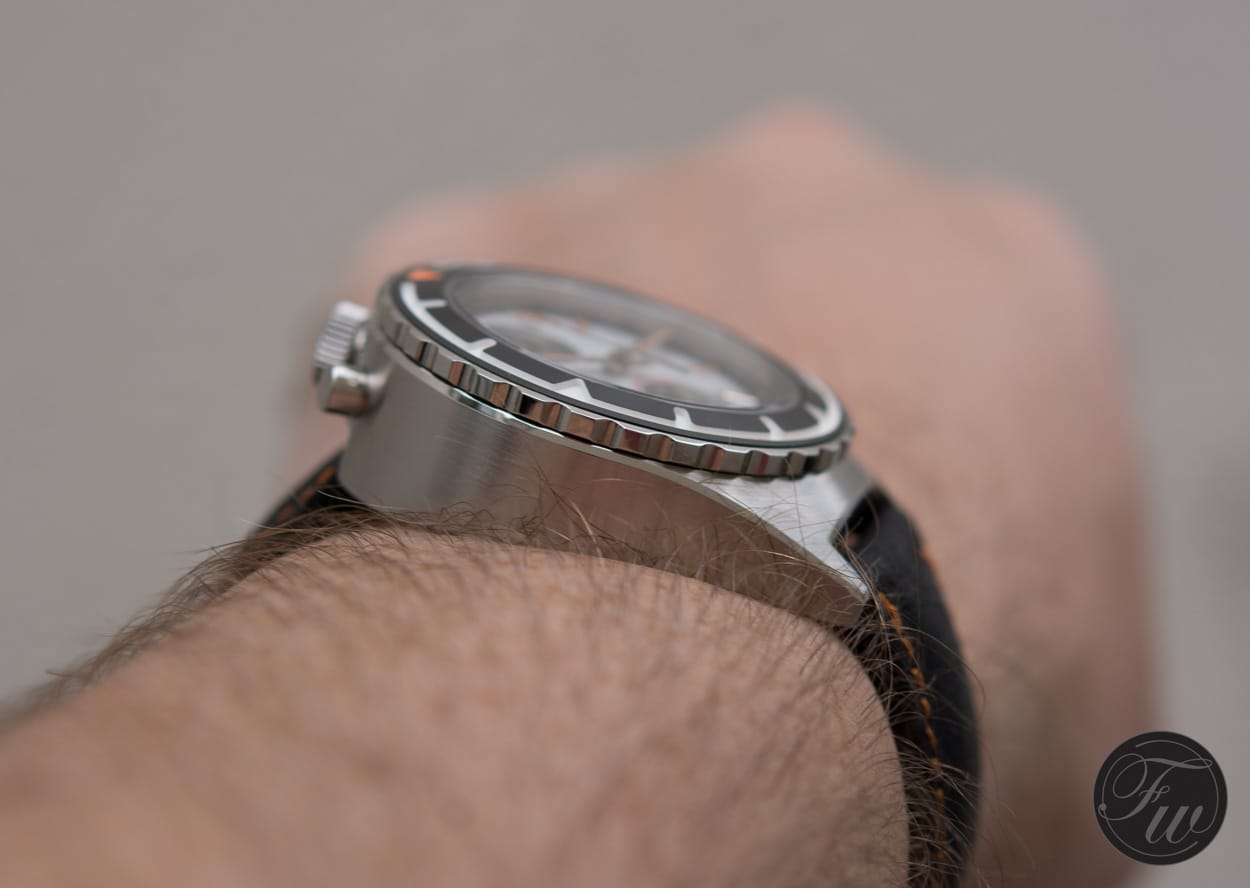 The case is made of stainless steel (316L grade, like most other watches on the market) and the first thing that happily surprised me was the very nice finish. Brushed finish on the case back and thick polished facets above it. A nice curve can be seen in the case when you look at it from the side, and the finish (both the brushed finish as well as the polish facet) follows this curve all the way to the end of those funky 1970s lugs.

This Stuckx Bull watch, or Bull  “Panda” as I have the version with dark sub dials on a white dial here. The dial has been applied with Super LumiNova for superb readability during low light conditions. I particularly love the raised indexes on the dial with orange filling. It also matches the triangle on the bezel. 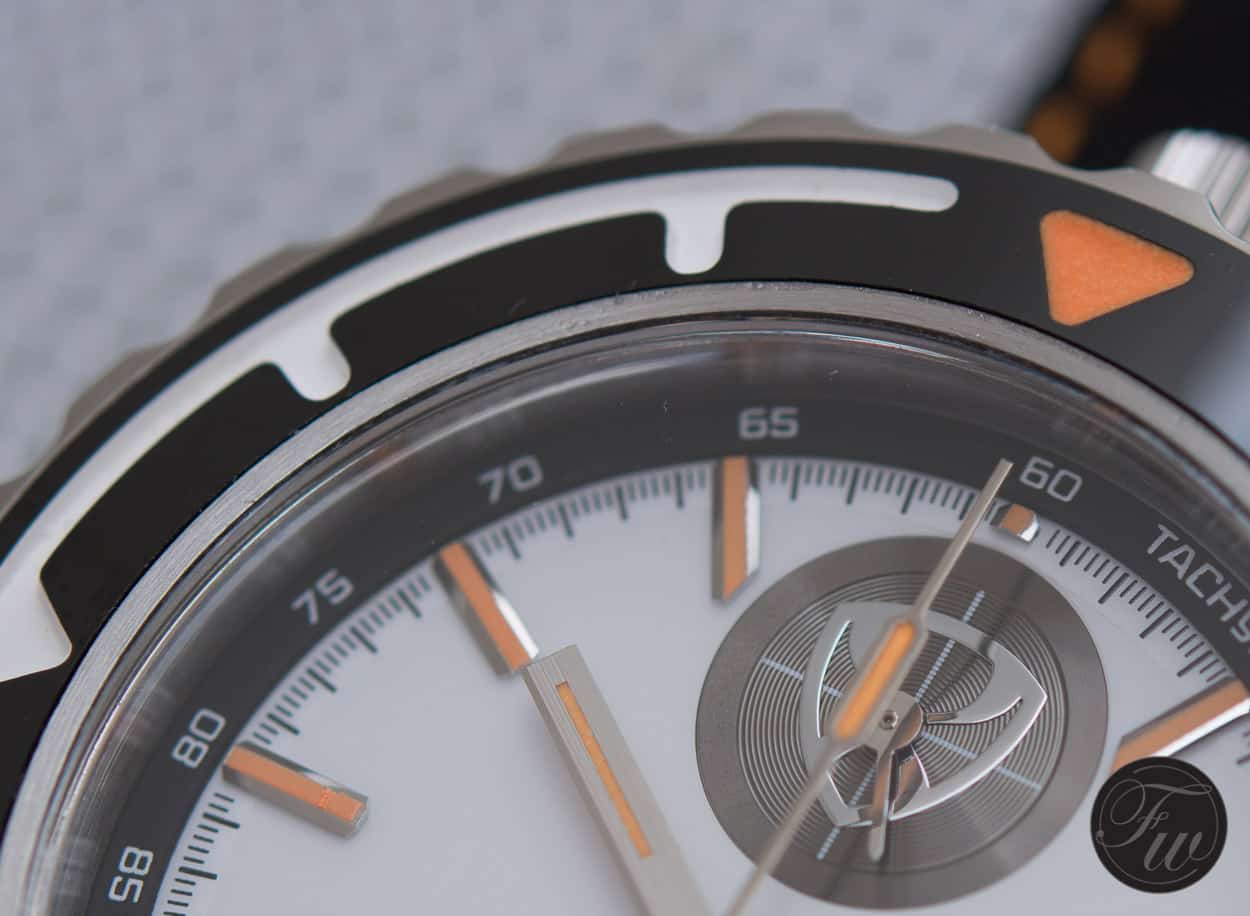 The bezel is made of ceramic and is uni-directional and fully rotates in 120 clicks.

As you can see, the Stuckx logo is embedded in the grained sub dial at 12 o’clock. Very subtle and very 1970s. No need to put large writing of the brand name everywhere like we see nowadays (unfortunately).

The watch I received from Stuckx has a nice leather strap with matching stitching. The buckle I had on the watch is unsigned, this will change in the final version I’ve been told. There are 12 different design variations possible with this watch, follow the link at the end of the article to learn more about them.

I want one, how does it work? 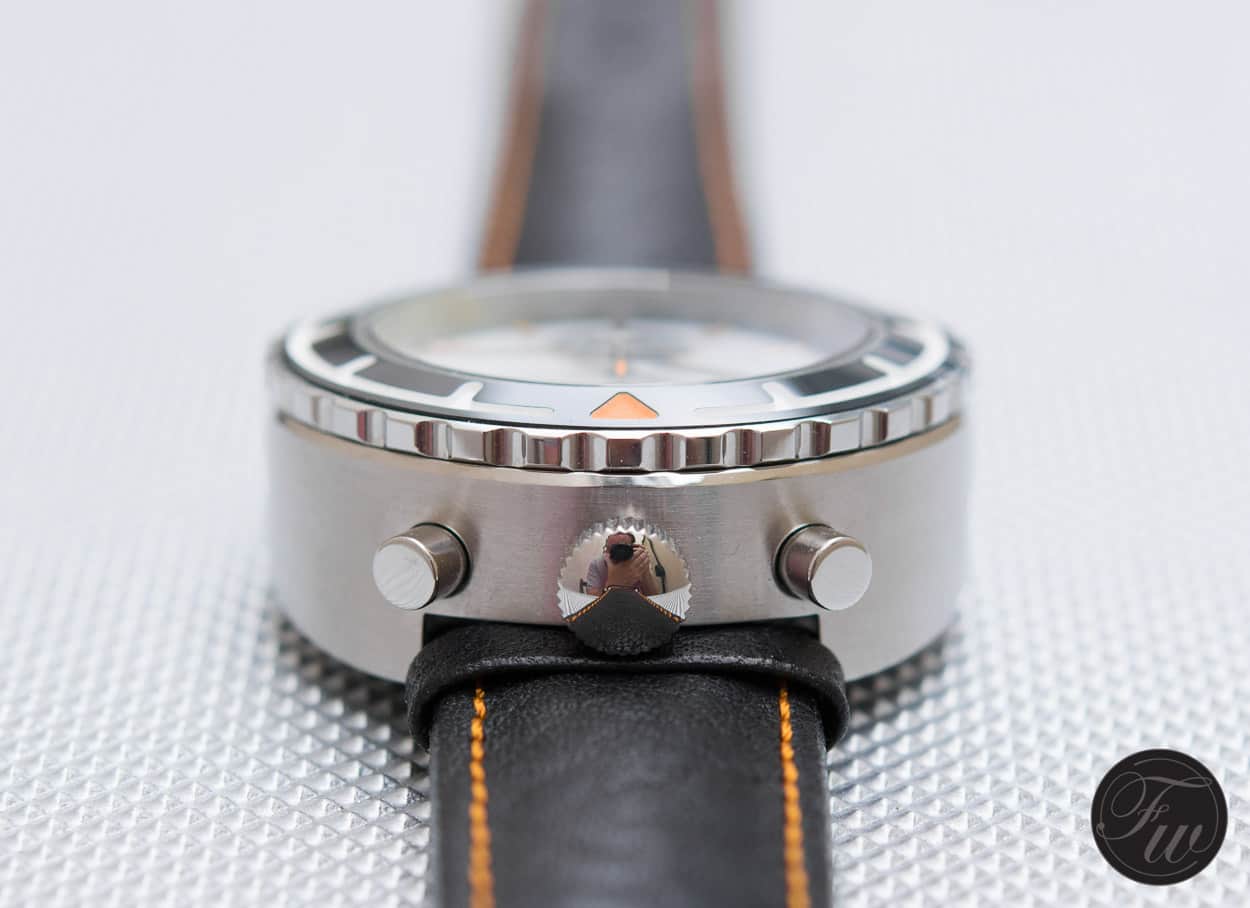 Stuckx uses crowdfunding (Kickstarter in this case) to get the watch to the market – you. This means for now you can only order one when you pledge to the Kickstarter project so Stuckx can use the funding to start creating the watches. This might be a drawback for you, but it will also give you the opportunity to have a chance to buy something unique and not something you will see every day or on many other wrists. The Kickstarter Project site of Stuckx gives a nice detailed drill-down of all the options, risks and challenges. Rest assured that Stuckx is not some hobby project or way to make quick cash (I think there are other ways to do that), but a solid and professional project based on vision and a good strategy.

As I wrote above, if you pledge for one of the watches still available you will receive the Stuckx Bull for a relatively low amount of money (at least with a very nice discount compared to the final price when the funding project is finished), €749 Euro for the mechanical version as shown in this article or €280 Euro for the model with the mecha-quartz movement.

The planning is to close the funding later on this week and start the actual production right after. After the final checks on the product, the watches will be shipped to the customers in December and January.

Find more information on the Kickstarter project and how to pledge for it here. Follow Stuckx on instagram here as well as on their Facebook page.