That’s right, everyone’s favorite April Fools’ watch from last year is going into very limited production. Brought to you by Studio Underd0g and Fratello, the Aubergine dial project will raise funds for the fight against Testicular Cancer while, hopefully, putting a smile on your face.

April Fools’ Day watches have become a thing. I remember the first time I became aware of the industry’s burgeoning ability to poke fun at itself was while I was working for Bremont. Bremont has done some fantastic spoofs of the brand’s own watches over the years, with other brands piling in on the act. It’s always a fun day for journalists and (I hope) consumers of watch journalism and, every so often, those madcap ideas born to make people laugh find a way of coming to life. 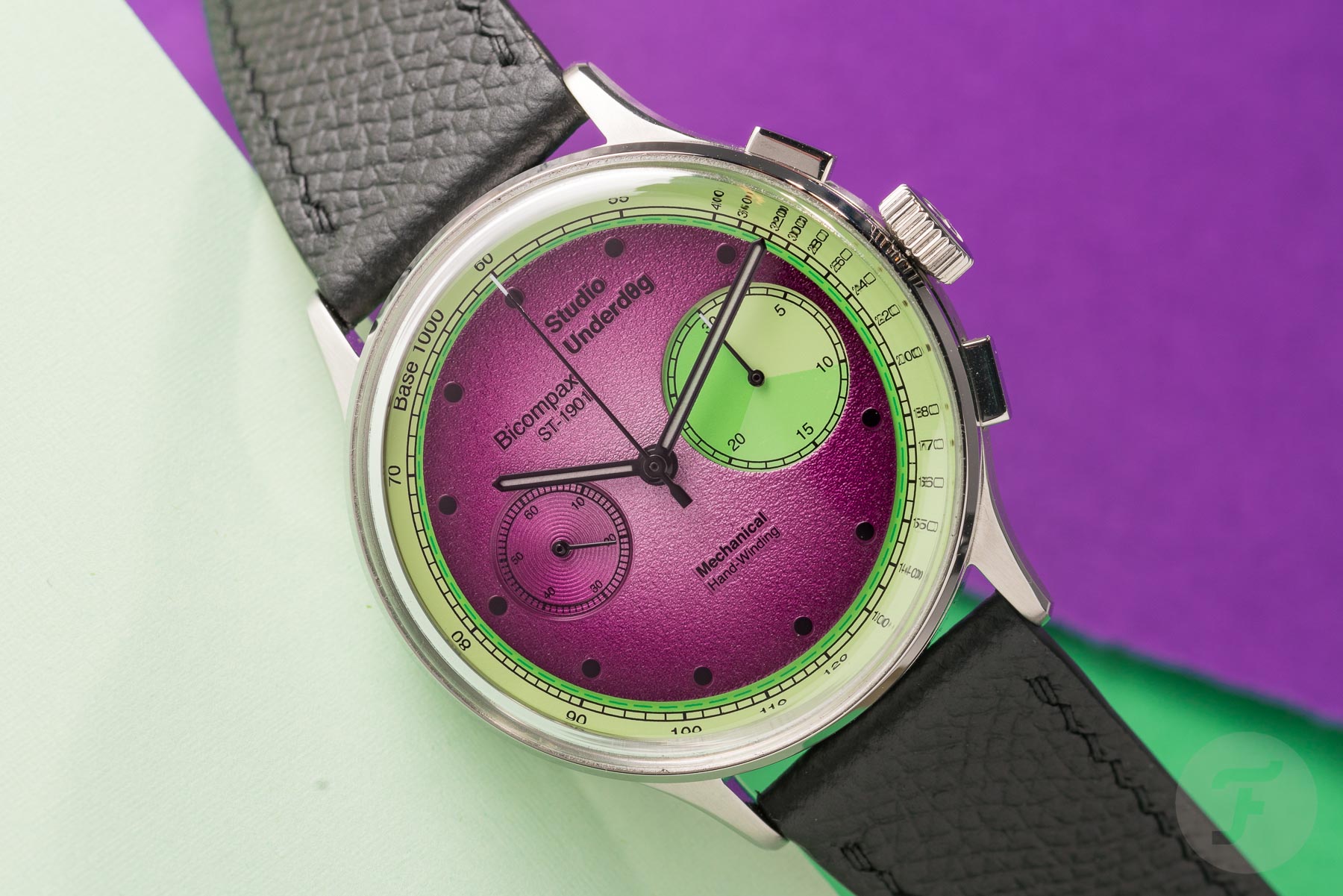 Richard Benc of Studio Underd0g approached us with an idea. He’d noticed his community react with serious interest when he “launched” the Aubergine concept last year and wanted to capitalize on that interest for a good cause. We had a call and decided that, given the demographic profiling of Fratello’s readership, Studio Underd0g’s clientele, and the general, ahem, “associations” of the aubergine emoji that it would be apt to bring this watch to life in support of a charity focusing on the issue of testicular cancer. As fate would have it, the color of the ribbon worn to raise awareness surrounding testicular cancer is purple… It doesn’t get much more prophetic (or should that be “priapic”?) than that…

As such, we’ll be donating all profits to Cancer Research UK. Neither Fratello nor Studio Underd0gs will see a dime from this release, which we hope will make the smile this watch was designed to put on your faces just that little bit wider.

Benc has seen his Studio hit the ground running. A whimsical combination of concepts and smartly selected components make his creations an almost unrivaled proposition within the brand’s chosen price point. Say what you want about the “tasty” designs (and I’m sure many of you have much to say), but Benc has succeeded in doing something different. Most importantly, it isn’t really different for the sake of being different (which often seems to be the extent of the creativity of microbrands in the same pricing sphere). The whole idea is a little bit silly. Were it not for the handsome dial layout and the thematically appropriate material design decisions (I’ll get to those momentarily), this idea would almost certainly fall flat. As it is, this unabashedly joie de vivre approach has spawned a rather ravenous group of followers already. 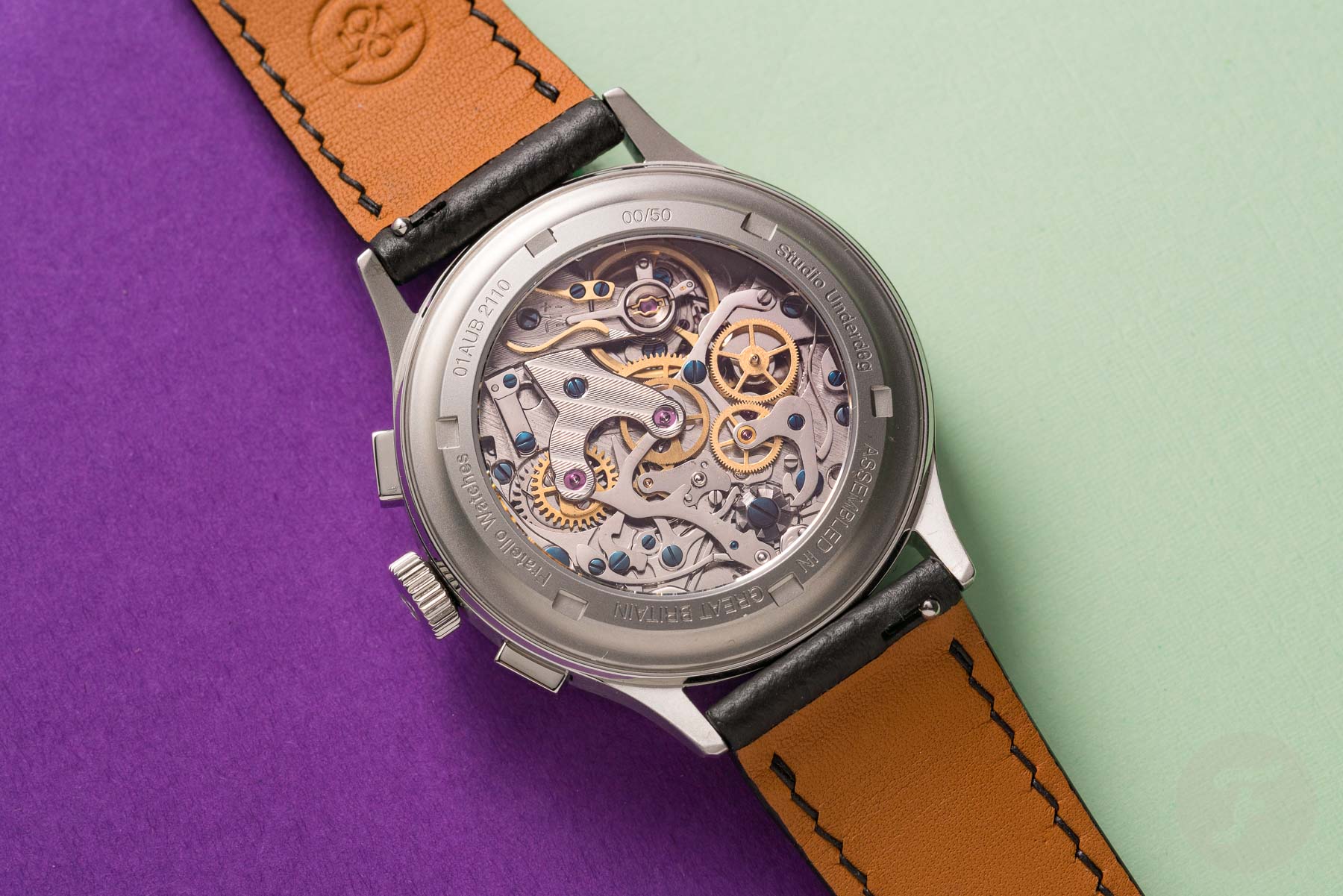 So what do I mean by “appropriate material design decisions”? As you might have read on these pages in the past, I frequently bang the drum for making “smart design decisions”. What that means is to choose the “best of type” that fits your brand’s price point (if that’s the order in which you’re working), or, alternatively, allow the retail price of the project you’re working on to balloon to whatever it needs to be to accommodate your vision precisely. What it precludes is, for example, selecting a second-rate style of finishing because you want to “call up” to a price bracket above the one your brand is occupying. 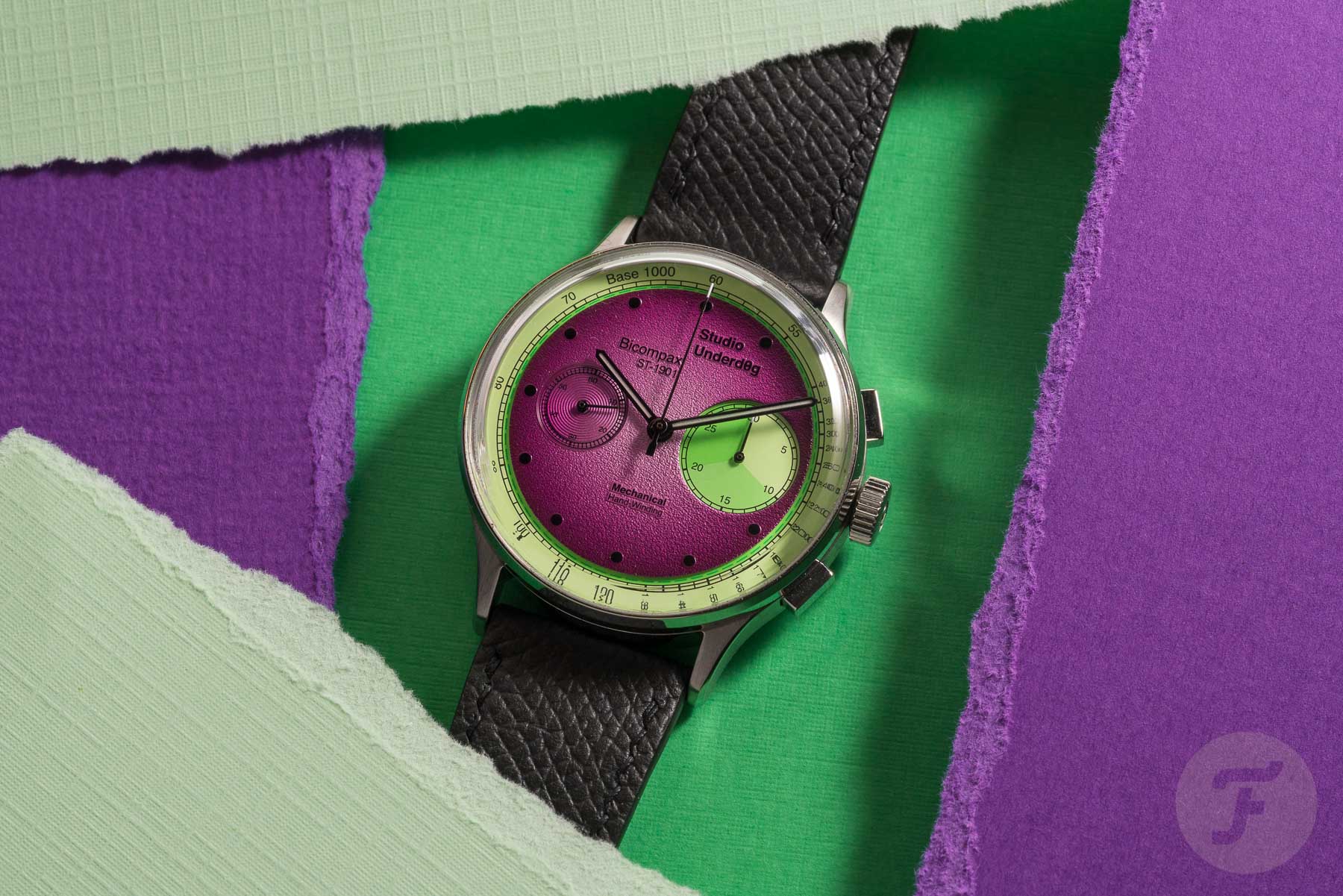 Microbrands do this frequently. They do it because they want to sell you a watch. Claims such as, “the best-value luxury watch” abound. Generally, brands that feel the need to claim that should be explored cautiously. On the occasions I’ve chosen to trust such claims, I have been roundly disappointed. I choose to focus instead on brands that don’t feel to need to justify the obvious decisions and look at the overall concept of what the brand is trying to achieve. Here, Benc is clearly trying to “hit you in the feels” first and foremost, before pleasantly surprising you with how well the product — independent of its conception — hangs together once you get it on the wrist. 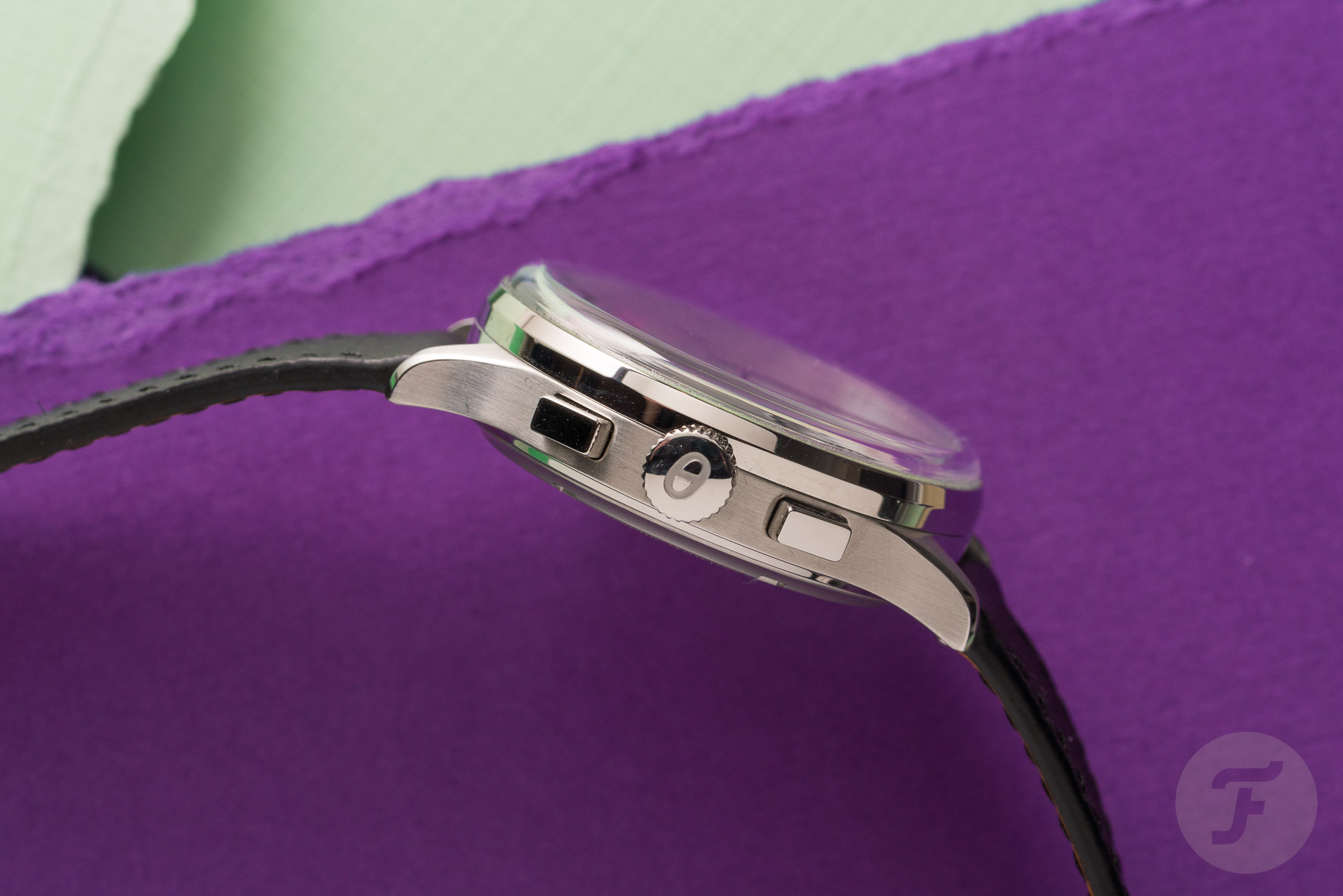 Good choices for a good laugh

Certain dial finishes cost more than others to execute (and cost even more to execute well). One of the more popular surface finishes doing the rounds among micros at the moment is the roughened paint surface, with its course, grain-like texture. It looks a bit like the crust on lava after it has just started to cool. In all seriousness, it doesn’t have much of a “luxury” feel to it at all, but it does do some things well. 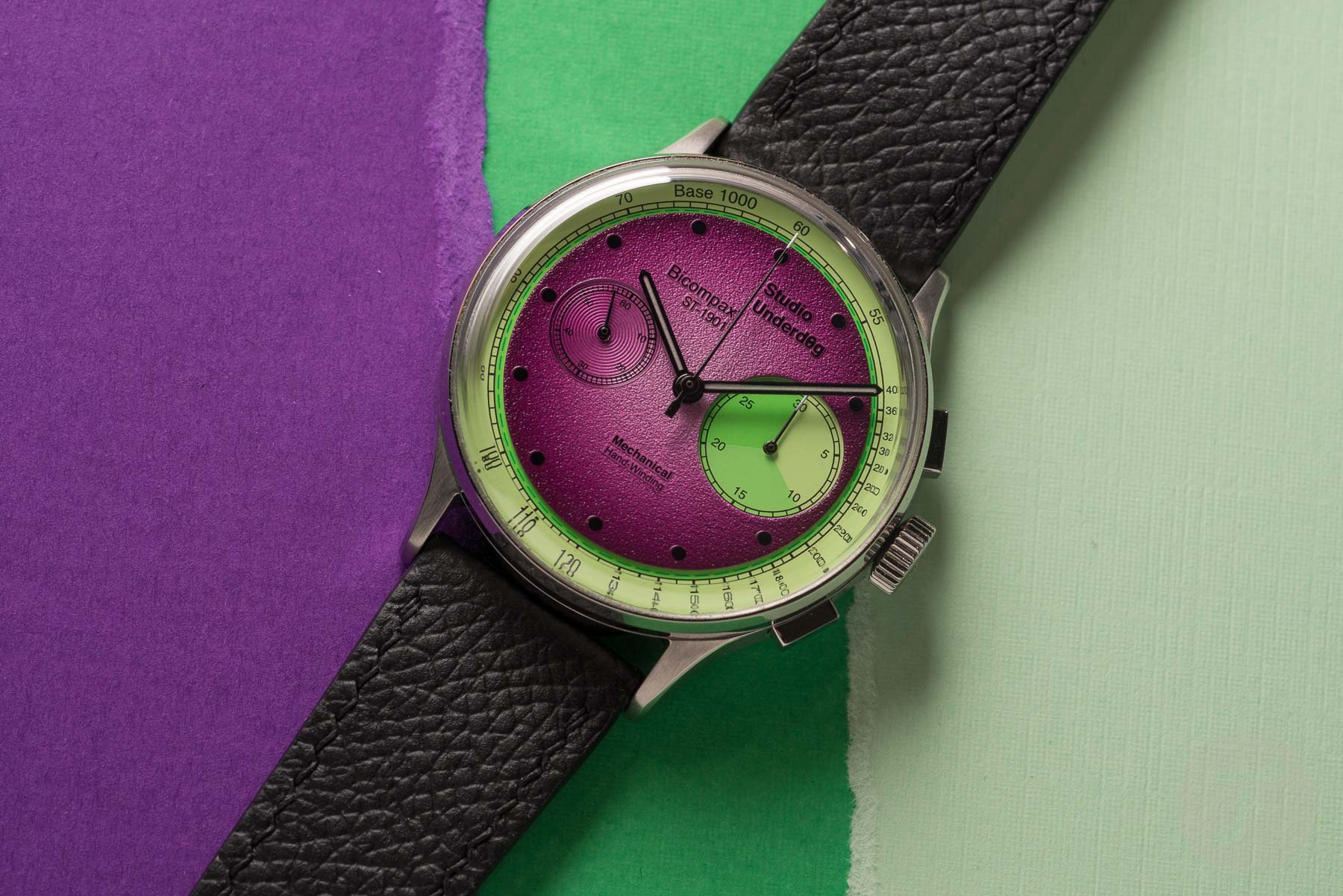 It hides blemishes, marks, or inconsistencies in the application of paint rather well. It is generally quick to apply. Whether you like it or not, it adds a bit of depth and visual interest to the dial. But if you deploy this finish on the wrong type of watch (say, a dress watch), it looks… off. In most of the models I’ve seen this finish used, it jars me. Even for tool watches, I find it distracting (although I think those choosing to use this surface finish on a tool watch think it comes across as “rugged”, I disagree).

Here, however, it is finally at home. The roughened surface texture somehow calms the vibrant colors often employed by Benc in his designs. It also appears to be a far more organic material than simply paint on brass, which works when your inspiration is something like a watermelon, mint choc chip ice cream, or, in this instance, an aubergine (that’s eggplant, for the Americans out there). 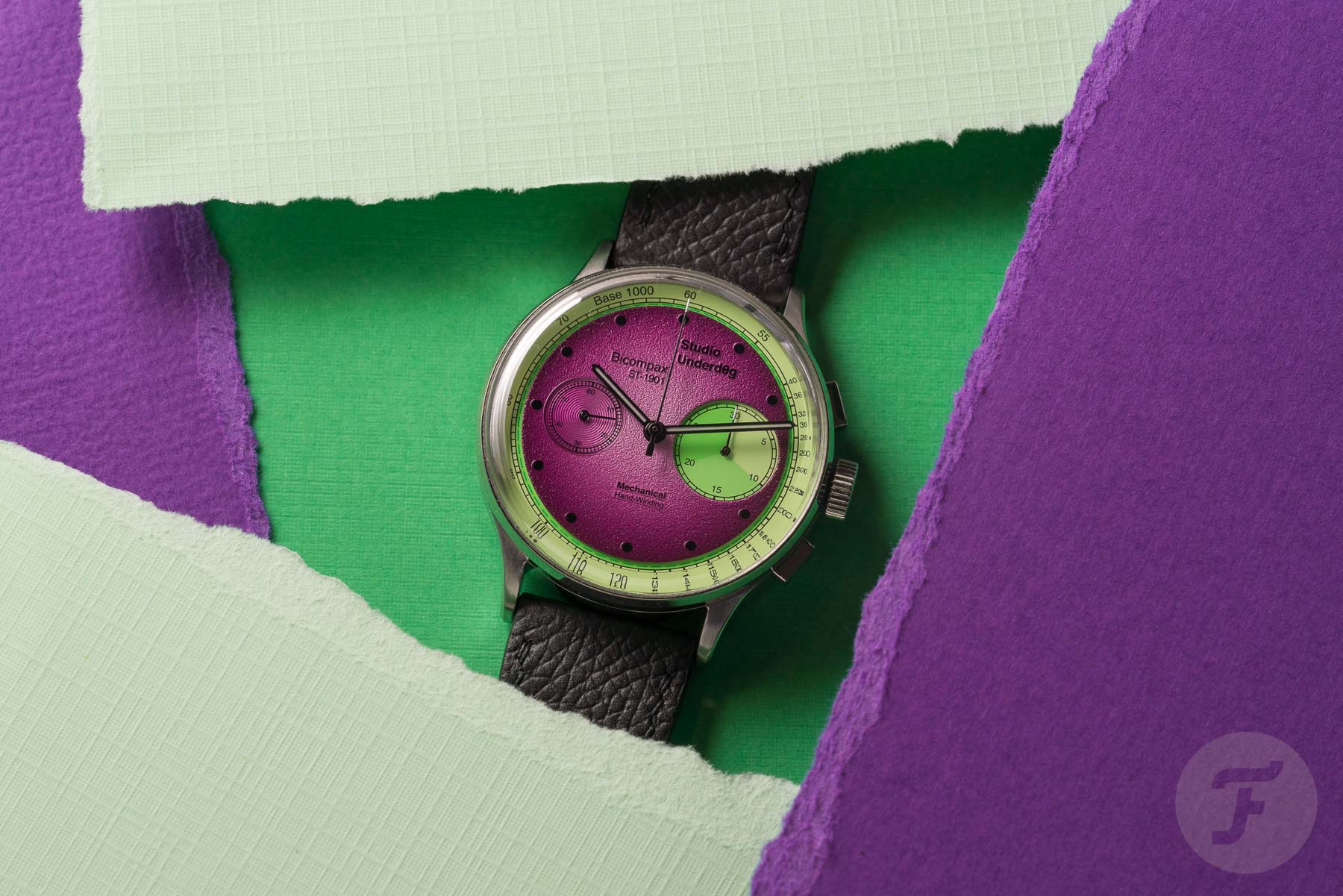 Now, I must disappoint you a little bit. The dial is not made from real aubergine skin. Apologies. That would have been one step too far (even for the heady combination of Fratello and Studio Underd0g). However, what I can promise is that the shelf life of this dial is significantly longer than the “prototype” presented last year.

To get the password, you need to have signed up to the Fratello newsletter! Emails have now been sent out!

To keep this project fresh, we’ll only be making 50 of these pieces, and 100% of the profits will be going straight to Cancer Research UK. This model will be available exclusively via the Studio Underd0g website. The watch will go on sale at 4:00 pm BST (3pm GMT / 11am EDT / 8am PDT / 5pm CEST / 11pm SGT) on April 1st and be listed on a password-protected page. We’ve now sent out emails with the password to all existing Fratello newsletter subscribers. If you didn’t sign up, then you’ve sadly missed your chance to get the password. But you can’t say we didn’t warn you!

To those of you who did sign up, and now have the password, it’s up to you! The product page on Studio Underd0g’s website will go live at 4:00 pm BST (3pm GMT / 11am EDT / 8am PDT / 5pm CEST / 11pm SGT). The fastest 50 supporters of the Aubergine project will be able to make one of these delicious (although not at all nutritious) watches their own for just £500, all in the knowledge that they have contributed toward a very worthy charitable cause. 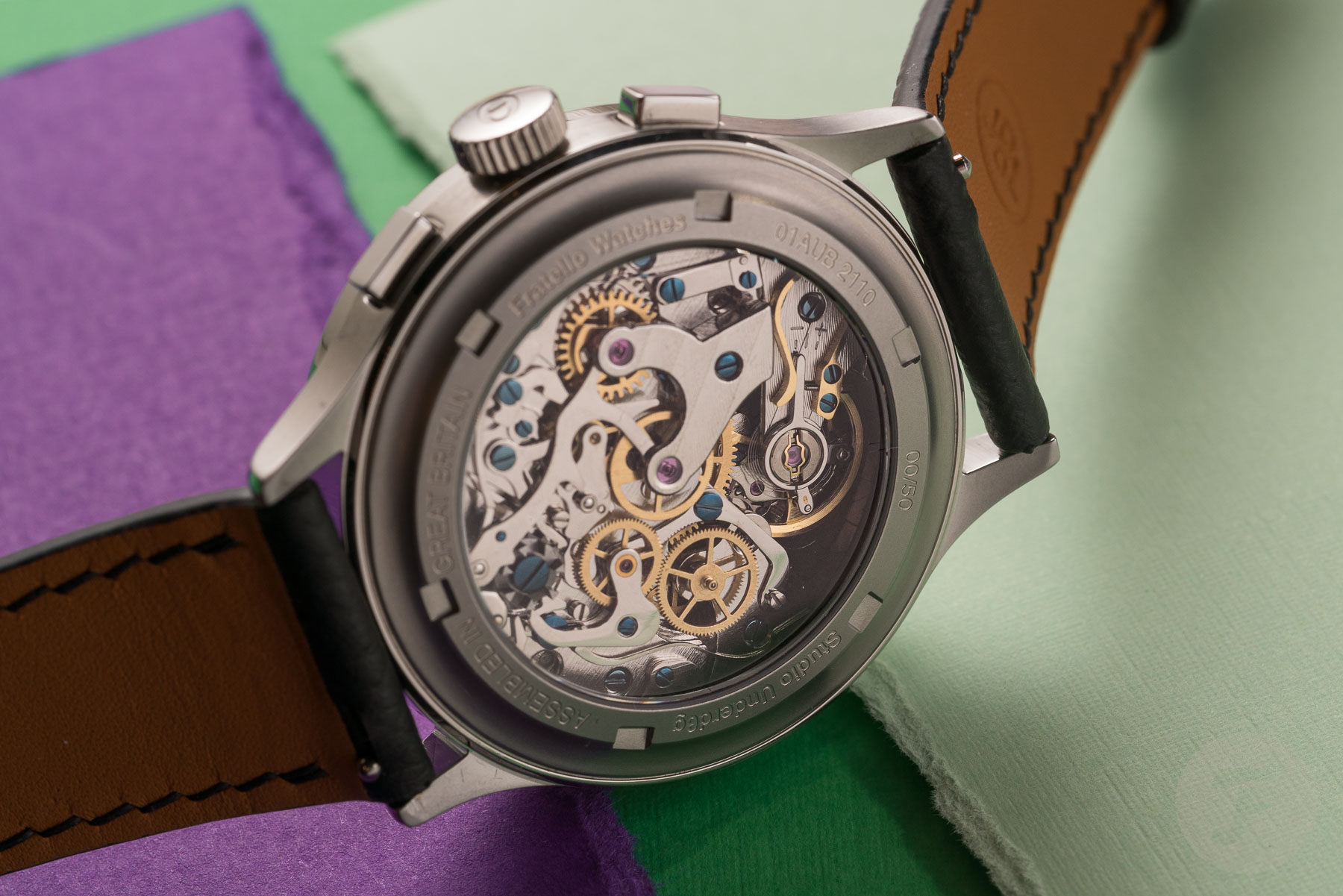 For that more-than-reasonable price, you get a 38.5mm stainless steel chronograph that stands 13.6mm high (10.8mm high without the crystal), boasting a 44.5mm lug-to-lug measurement and a 20mm lug width. Both the front and back crystals are sapphire, and through the rear one, you can see the ST-1901 manual-wind chronograph movement from Seagull. Those slim hands are actually filled with Super-LumiNova C3, and thus can be read easily in the dark. One key upgrade for this model is the made-in-the-UK strap, provided to the brand by The Strap Tailor. If you’re interested in this project and want to learn more about Studio Underd0g, check out the official site here.