Good morning, and welcome to another edition of the Sunday Morning Showdown, the Fratello series in which two editors drop all nuance and subtlety! The series in which we go bare-knuckle, defending a watch of choice. This week, it is our two newest Fratelli taking aim at each other. In the blue corner, it’s Daan with the Serica 5303. In the red corner, it’s Thomas with the Doxa SUB 300. Let’s get ready to rumble!

The stakes are actually quite high this time. Daan has just put his preorder in for a Serica 5303 in blue. Thomas is still on the fence, considering doing the same. Both our brawlers have contemplated adding a Doxa SUB 300 to their personal collections. Needless to say, this could get expensive for our boys… Or not, if they beat all the fun out of each other’s candidates! In any case, feelings might get hurt. 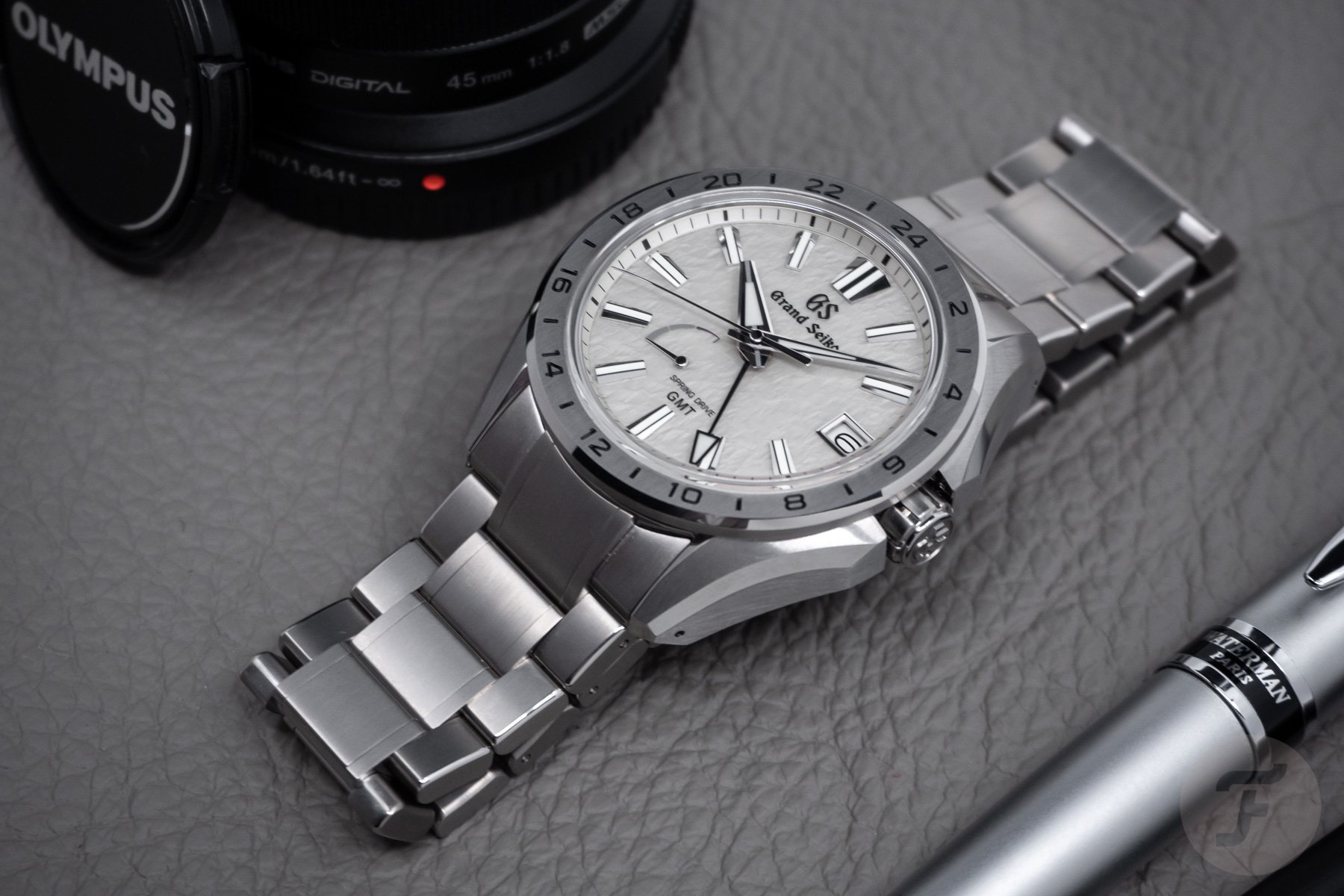 But first, let’s have a look at last week’s crossing of swords between Ben and Jorg. It was a battle of GMTs, with the current Rolex Explorer II ref. 226570 taking on the new Grand Seiko SBGE285G. Despite all of the boys’ efforts, they did not really manage to find a clear winner. You split your votes almost perfectly between the two. A very slight margin for the Grand Seiko seems to put the Swiss crown in its place. 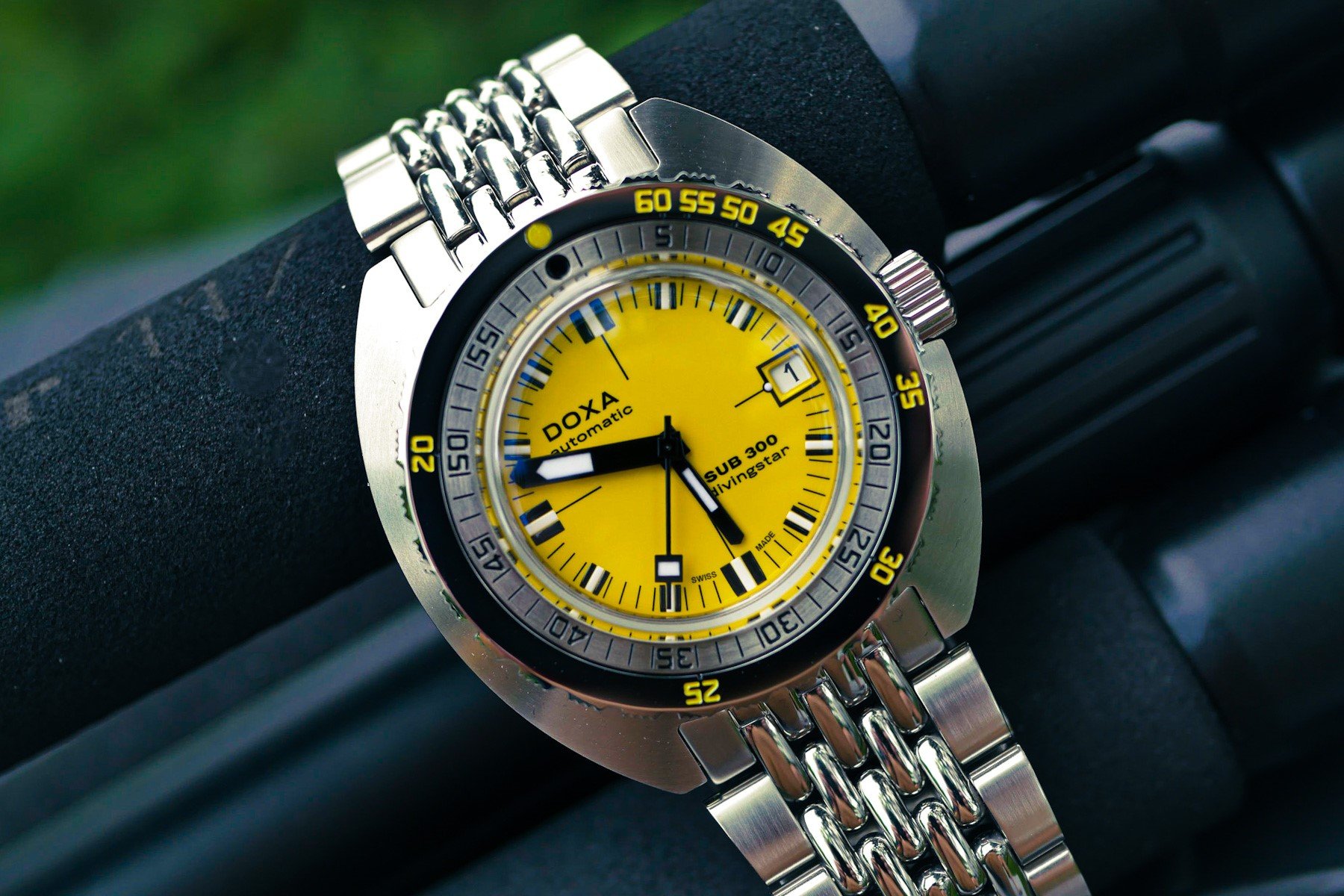 Guys and gals, this should not be much more than a formality. I mean, come on, the Doxa SUB 300 is one of the original gangsters of submerged timekeeping. When did you ever spot Jacques Cousteau rocking a Serica? Right?! Who are we to argue with the Calypso’s legendary captain?

I have to admit, I have not quite come around to purchasing a SUB 300 myself just yet. But every year when the sun comes out and the flowers start to bloom, I find myself longing for one. No watch reminds me of turquoise Mediterranean waters quite like this. No watch makes me want to put on a linen shirt and rent a Riva quite like this. It is a romantic watch, not necessarily pretty, but desirable for what it represents.

I would certainly get one in a bright color. I mean, this would not be my daily driver anyway, so why not opt for an orange or yellow version while we’re at it? Go big or go home. Daan’s pale blue Serica is, erm…pale in comparison. 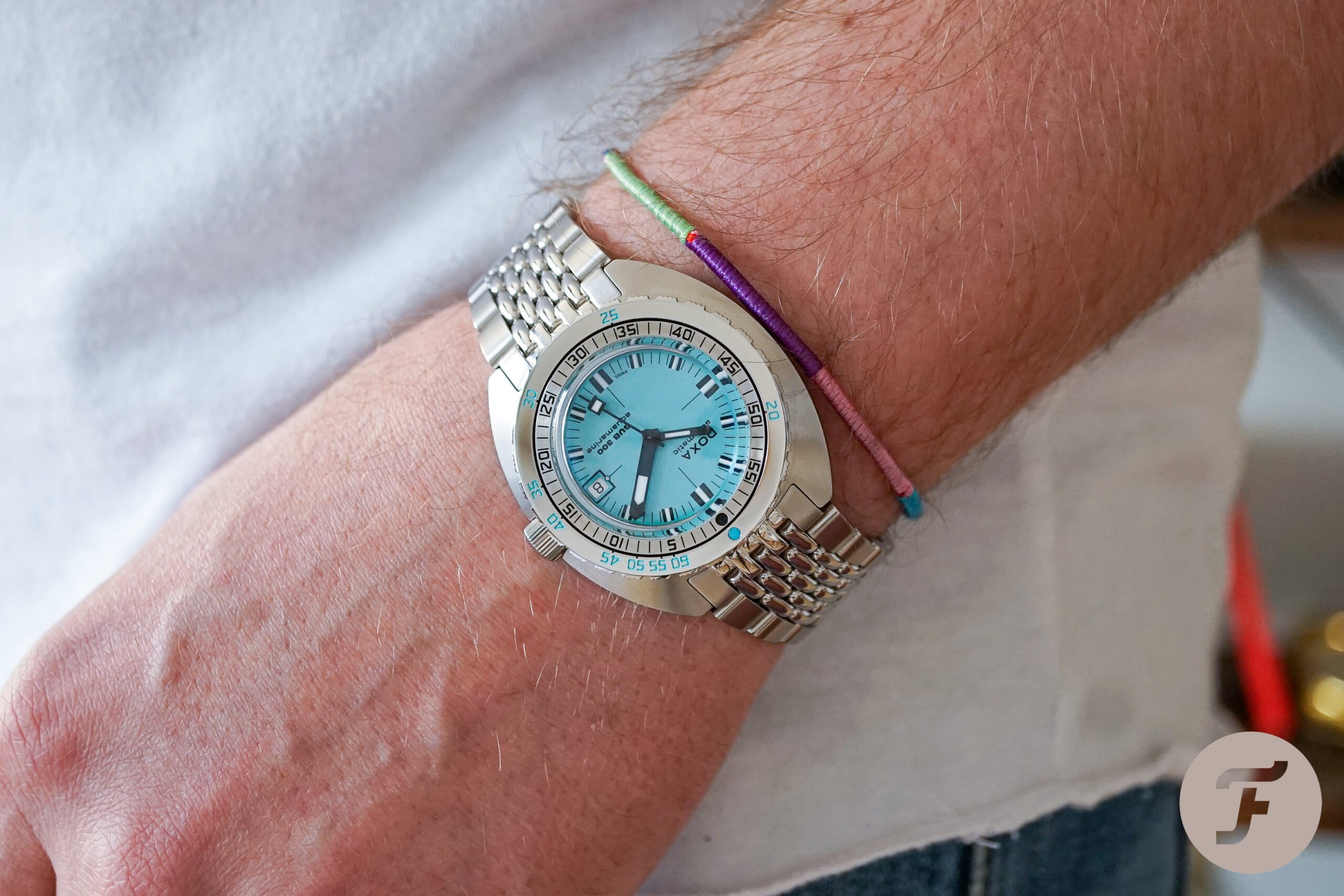 Some of my fellow editors have complained about the Doxa’s dial being too small. To me, though, that is precisely the point of this design. It is odd, sure, but it is completely unique. And I personally love the tiny dial under the domed sapphire. I think it is charming and quite special. And for those who disagree, why not just get a Sub 300T? Save a few bucks and get your desired big dial. For me though, the chronometer (that’s right, it is COSC-certified) SUB 300 takes the cake.

The case of the Doxa is just so cool. The way it drapes over the wrist, it’s like a shield, almost. It is a serious chunk of steel kept elegant by its short lug-to-lug and curved surface. I know the Beads of Rice bracelet is not for everyone, but it fits the style perfectly.

So, is it perfect? Well, of course not. One of the reasons I have not quite pulled the trigger is that Jenny fish logo. I could very well do without it, particularly on the clasp. But I will leave it to Daan to point out any other flaws. Let’s not help him out too much. 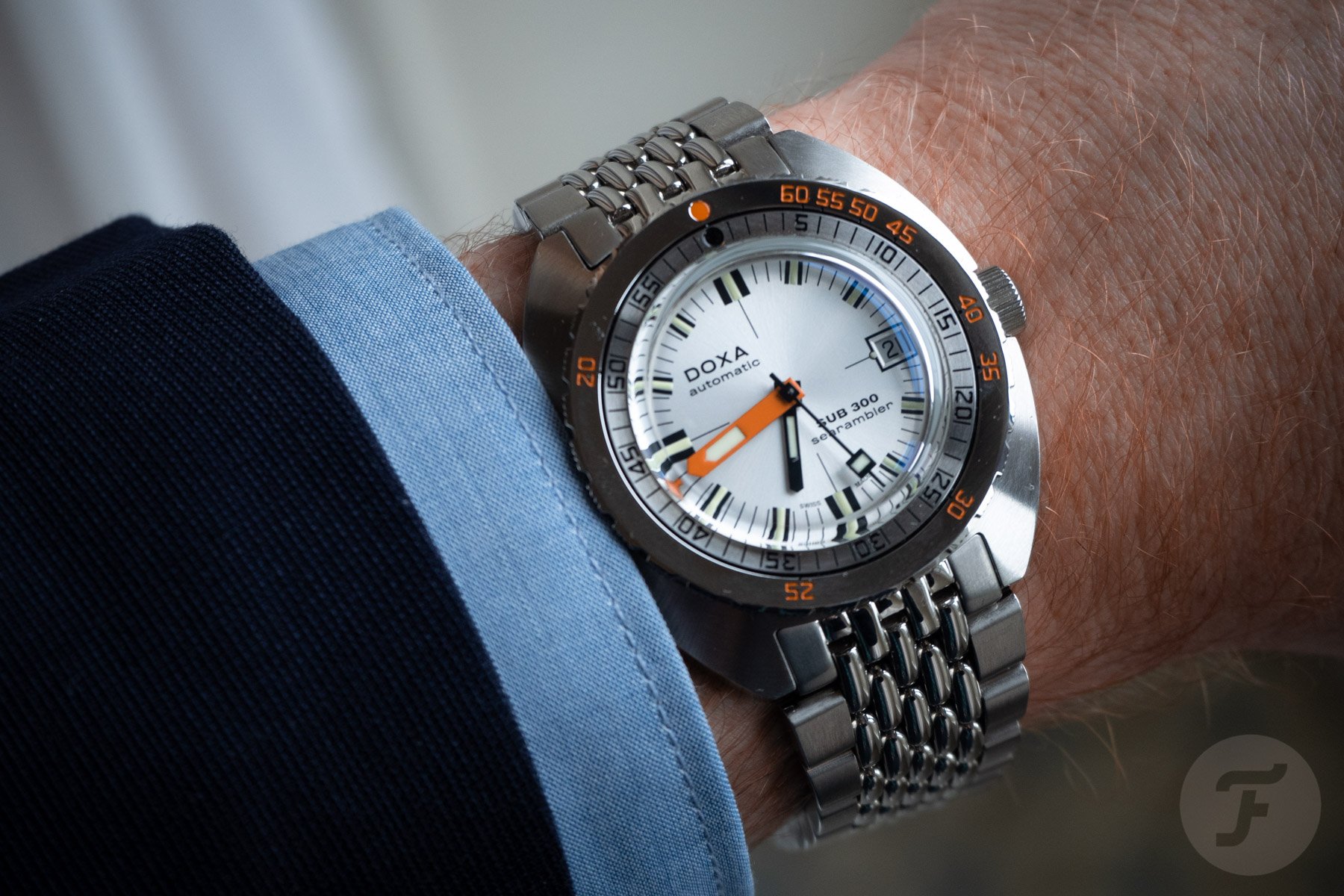 I have to give it to Daan, the Serica 5303 is indeed a bit of a gem. It is one of those watches that is much better in real life than in pictures. And yes, I am tempted to get one. But it does not hold up against the Doxa.

First, I hate to point out the obvious… but those indices. Yeah, they’re creative, but they look like they are the wrong way around. It’s weird and it hurts readability, which is not great on a dive watch.

Oh, and you will most certainly drop it when you try to strap it on.

Second, the watch is named after a French submarine. And it is not The Killer Whale or The Widow Maker, but S617. With only the water-resistance rating and “Swiss Made” to keep it company, “S617” is stamped on a weirdly unbalanced dial. You might think it was the watch’s reference, but it is not. This one has a name and a reference, both made up of numbers. That makes sense, right? Nope, it does not.

Oh, and you will most certainly drop it when you try to strap it on. It takes the most awkward finger gymnastics you have ever performed. Meanwhile, you will have it dangling dangerously from one end of the mesh bracelet. No, this is certainly no Doxa. 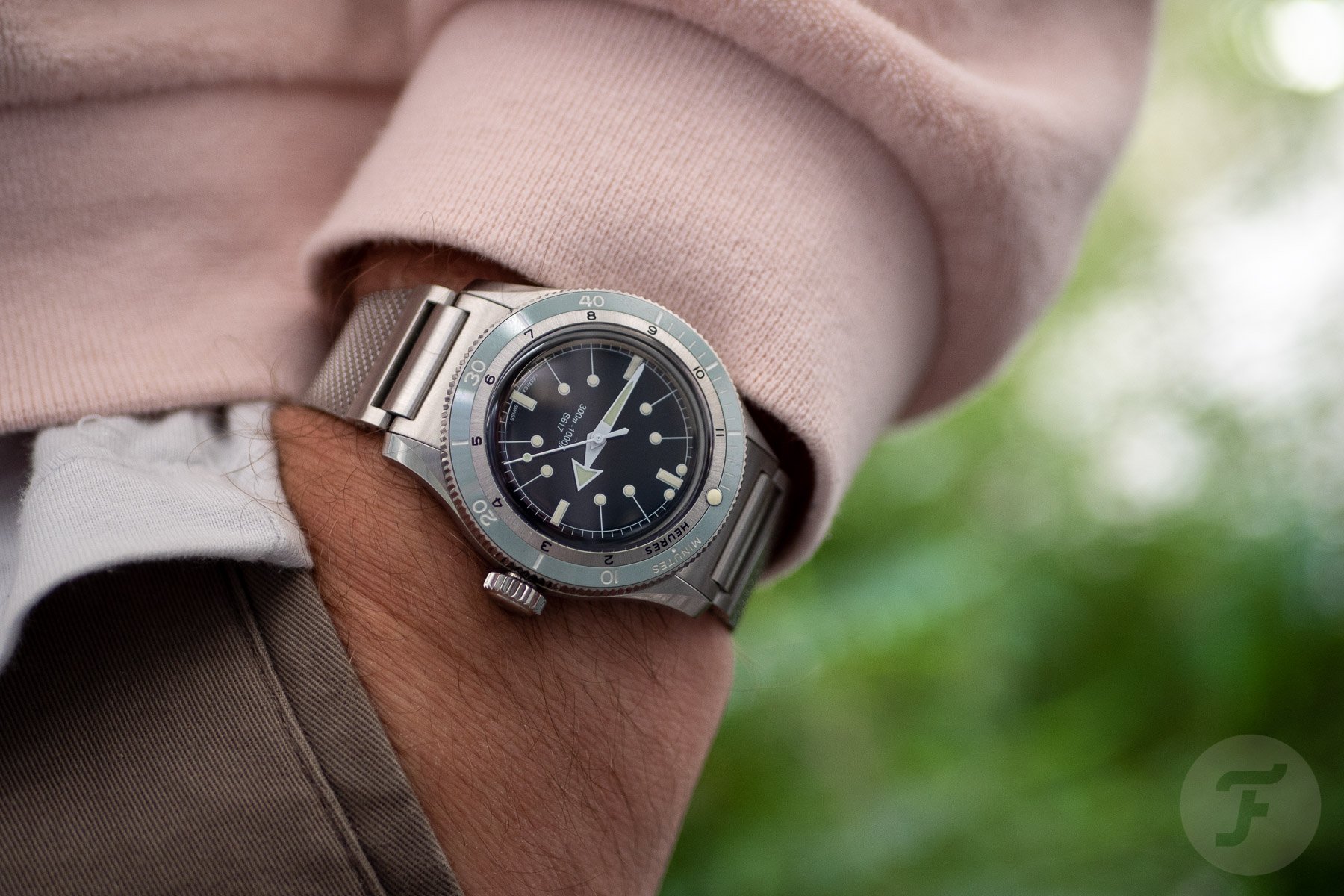 I already tried to beat the SUB 300 in the first Summer Splash battle against Thor this week. I know, I didn’t win by a very far stretch. But I’m still very confident that one day I’ll beat that weird UFO-like beast of a diver. And today might actually be that day because what a beauty I am defending in this showdown! If you’re looking for an elegant, capable, original, wearable, and, most of all, very good-looking diver, look no further and get yourself a Serica 5303!

It’s no secret that we here at Fratello are a bunch of Serica fanboys and -girls. You can clearly see there’s a watch enthusiast behind the design of Serica’s watches. The 5303 diver is no exception. Since last week, there are now three versions. There are the black-dial and white-dial versions, both with a black bezel, and now, there’s also the extremely dark blue-dial version with a crystal-blue bezel insert. That new version is definitely my favorite. And no, Thomas, it’s not “pale” at all! 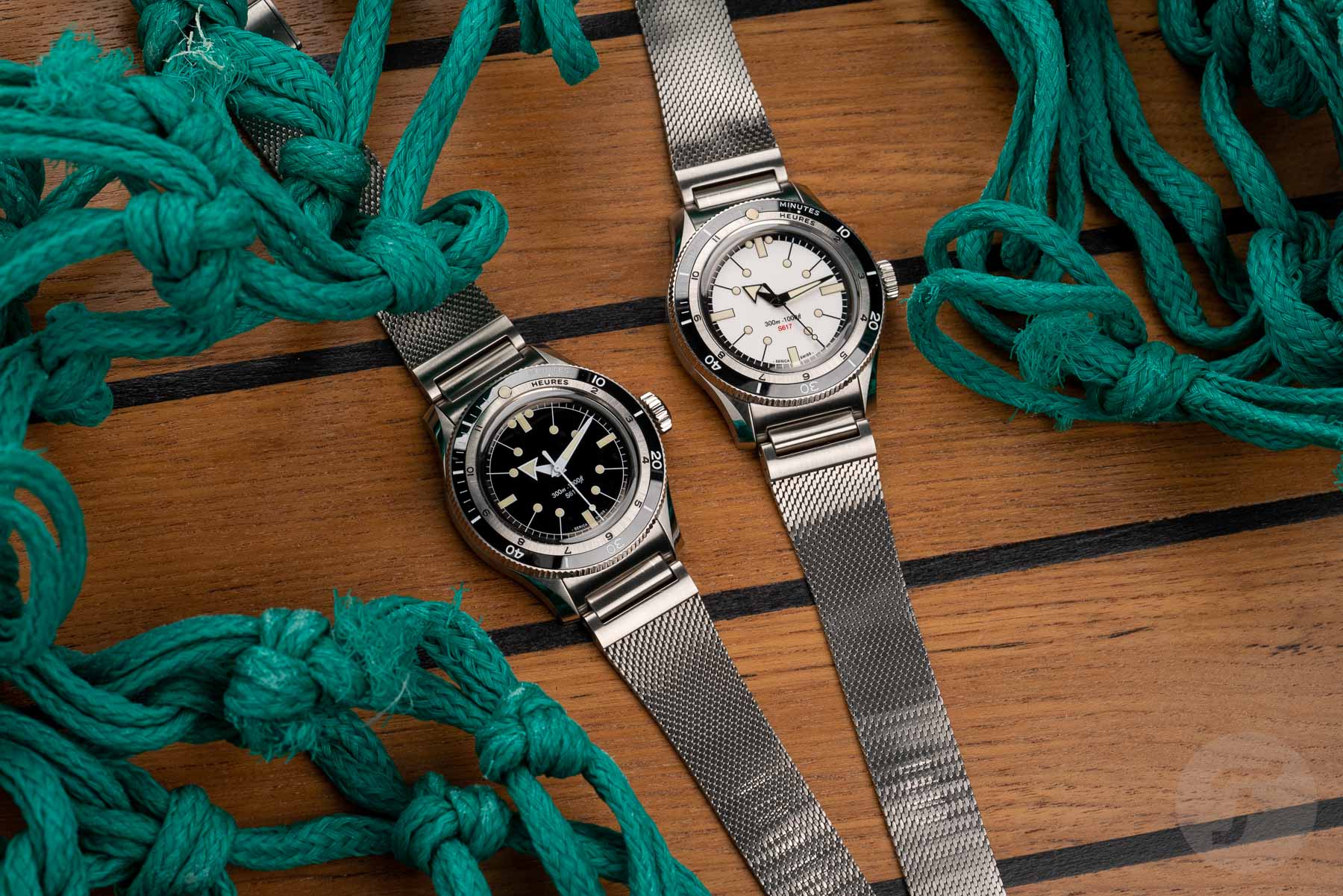 The perfect touch of color

It adds just the right amount of color, without being too loud. You won’t have any problem matching the crystal-blue bezel and midnight-blue dial to any of your outfits because they’re both not too outspoken. In my opinion, it’s a lot better than the in-your-face colors that Doxa is offering. I probably would never wear those in the winter, but the Serica is a very good year-round watch. It feels fresh and warm at the same time, if you know what I mean. And please, don’t try to bash its legibility because of those lume plots. Have you seen the size of the dial on your SUB 300? It’s so small, especially in comparison to those large stainless steel wings around it.

Those wings make the SUB 300 such a weird watch to wear, in my opinion. At first, it’s nice and quirky, but then it just becomes annoying. And that’s definitely not helped by its non-tapering Beads of Rice bracelet. The 5303, on the other hand, is a little dream to wear on the wrist. Perfectly proportioned, it’s nice and compact with, if I may say so, one of the best bracelets in the business. Usually, I don’t like mesh bracelets. They often have straight end links, they don’t taper, and they’re too shiny. Not this one, though! 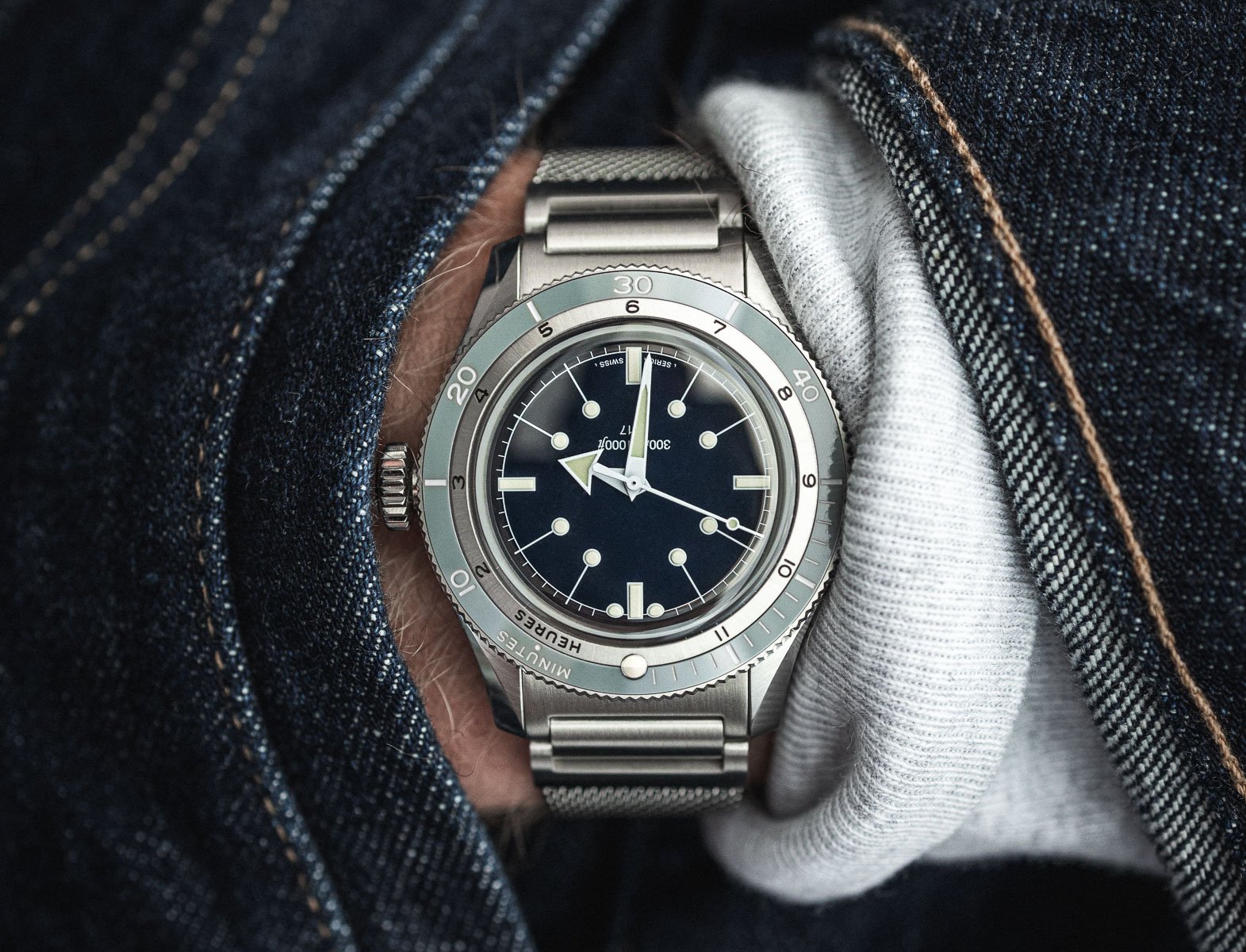 I love the beefy end links that match the case. The mesh is nice and thin, completely brushed, and it tapers very elegantly from 20 to 16mm. It’s true that putting it on takes a little getting used to. But that’ll happen quickly and you’ll be able to put this on in a breeze. Adding to the comfort is the fact that you can quickly adjust the size on the fly. To me, this bracelet perfectly accentuates the vintage-inspired diver style of the watch, and it makes it so incredibly wearable. That’s not something you can say about the Doxa.

There’s only one thing I really hate about the 5303 with the crystal-blue bezel — the fact that I still have to wait until October for mine to arrive! That means I won’t be able to wear it this summer in short sleeves while drinking cocktails in the sun. But I guess there will be many more summers to enjoy with it after that. I can’t wait! Oh, and last but certainly not least, I think that submarine reference on the dial is actually a genius move and a great Easter egg! 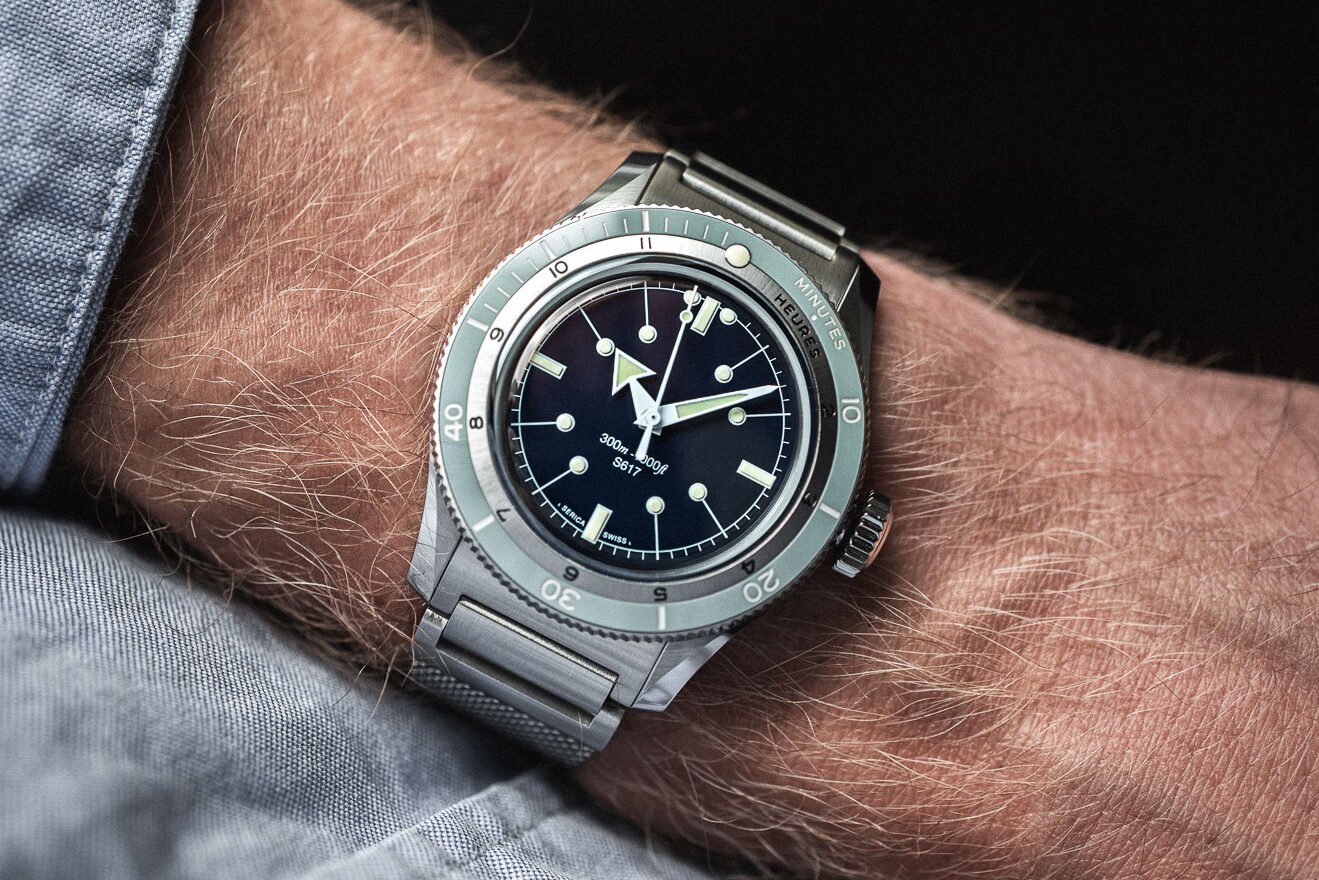 So, there you have it — two great divers, both very much vintage-inspired and with great specs. But which one would you choose? Are you going for the Doxa SUB 300 with its longstanding history, or will you go for the Serica 5303, the new kid on the block? Make sure to vote and let us know in the comments why you’d choose one over the other!

Hot Topics
Introducing: The New Seamaster Professional 300M 60 Years Of Bond — With A Special Animated Case Back
105 comments
Are You Still After An Omega × Swatch MoonSwatch?
97 comments
It’s Time To Invest In A Dress Watch — Our Picks From Breguet, Omega, Grand Seiko, And More
73 comments
Introducing: The Oris Divers Sixty-Five Fratello Limited Edition
68 comments
The Rolex Waitlist Conundrum — How Much Will The Price Of Your Watch Increase While You Wait?
50 comments
Popular
Speedy Tuesday – The Original Omega Speedmaster Ultraman
Robert-Jan Broer
5
Watches Of The King – Elvis Presley’s Notable Timepieces
Balazs Ferenczi
9
Seiko Tuna For The Rest of Us
Gerard Nijenbrinks
13