In this Sunday morning column, two of our writers go head-to-head in an epic showdown for the ages. Strong opinions and hysterical hyperbole are welcome (so feel free to join in with the fun in the comments section below). And don’t forget to let us know which watches you’d like to see torn to shreds/effusively exalted next week. We’ll try and feature as many of our readers’ choices as we can. This week, we’ve got another head-to-head for you. It’s getting deep this week. The Rolex Sea-Dweller 126600 is going up against the Grand Seiko SLGA001.

If we were running a competition for misleading titles, this one might win it. No, dear readers, we are not diving headfirst into the muddy trenches of World War I, but rather the subaquatic variety of colossal chasms. But before we dive into the briny deep, let’s run through last week’s results.

Ben and I traded blows over the best beater between the Rolex Oyster Perpetual 114300 and the Grand Seiko SBGH281. Somewhat surprisingly, given the longevity and popularity of the OP, the Grand Seiko walked away with a comfortable 61/39 win. Perhaps we shouldn’t be shocked. The Fratelli knows what it likes and likes what it knows.

Mr. Hodges has donned his 12oz gloves once more and is ready to slug his way to another win. And this week, he’s rolling out the Rolex Sea-Dweller 126600 in the hopes it can sink my Grand Seiko SLGA001. Enjoy! 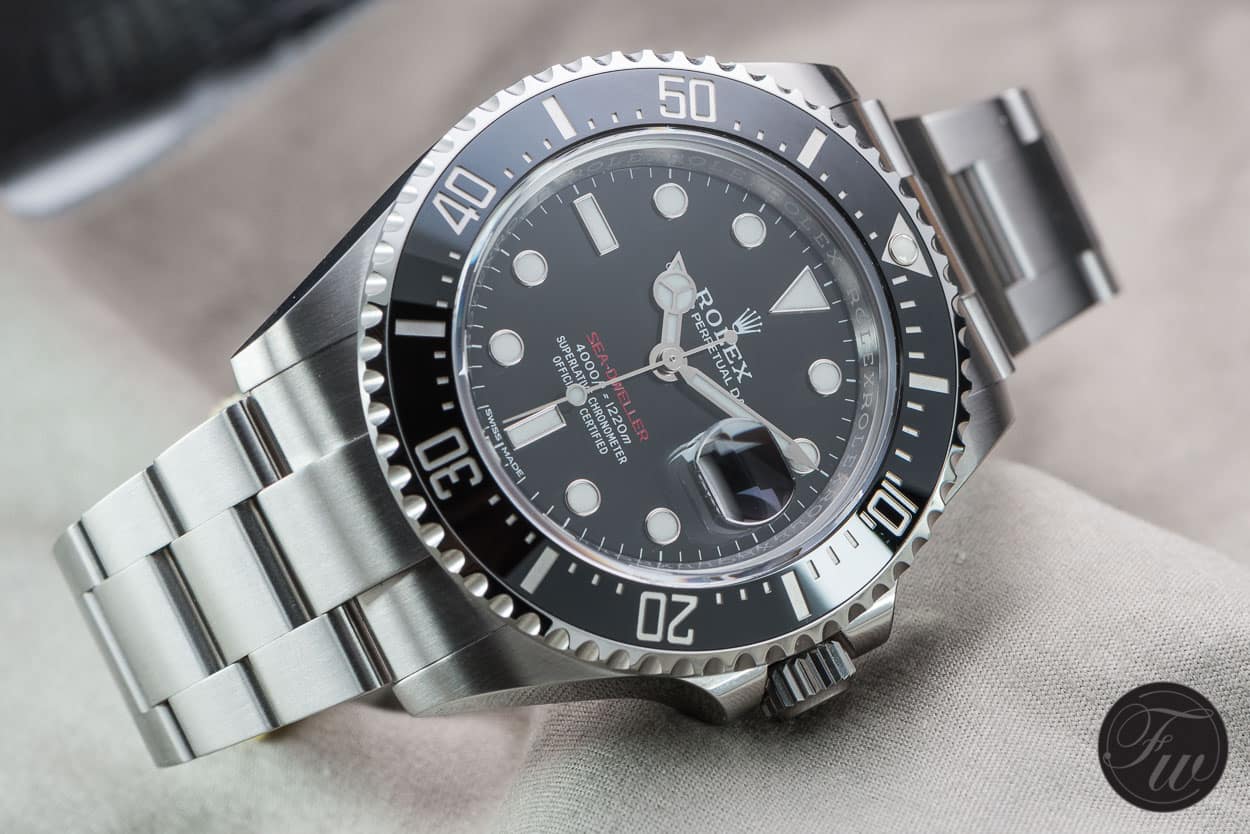 You cannot say the Sea-Dweller has been a mainstay in Rolex’s history. A fluctuating depth rating best exemplifies the ups-and-downs of the SD. In 2008, the Deepsea Sea-Dweller took us to the abyss and filled the void between iterations. Reference 126660, or DSSD for short, came in a larger 44mm case, which allowed the watch to reach depths of 3,900m. The size and heft of the case was a problem for some, Jorg included. The issue being, the lug width was too narrow at 21mm to support the four extra millimeters over the standard 40mm Submariner. Luckily, Rolex balanced the ratio with a 22mm lug width in 2017.

Most importantly, for the purists at least, the SD4K had no magnifying cyclops on the sapphire glass to assist with viewing the date.

Following the Deepsea, the standard Sea-Dweller returned in 2014 with a 40mm case and helium release valve. The Sea-Dweller 4000, or SD4K, was thicker than a Submariner to reach depths of 1,220m (I don’t think Rob’s Grand Seiko SLGA001 could handle those kinds of depths).

To step out of the shadow of the Sub, the Sea-Dweller 4000 also had a fully graduated 60-minute bezel instead of just minute markers for the first 15. Most importantly, for the purists at least, the SD4K had no magnifying cyclops on the sapphire glass to assist with viewing the date. 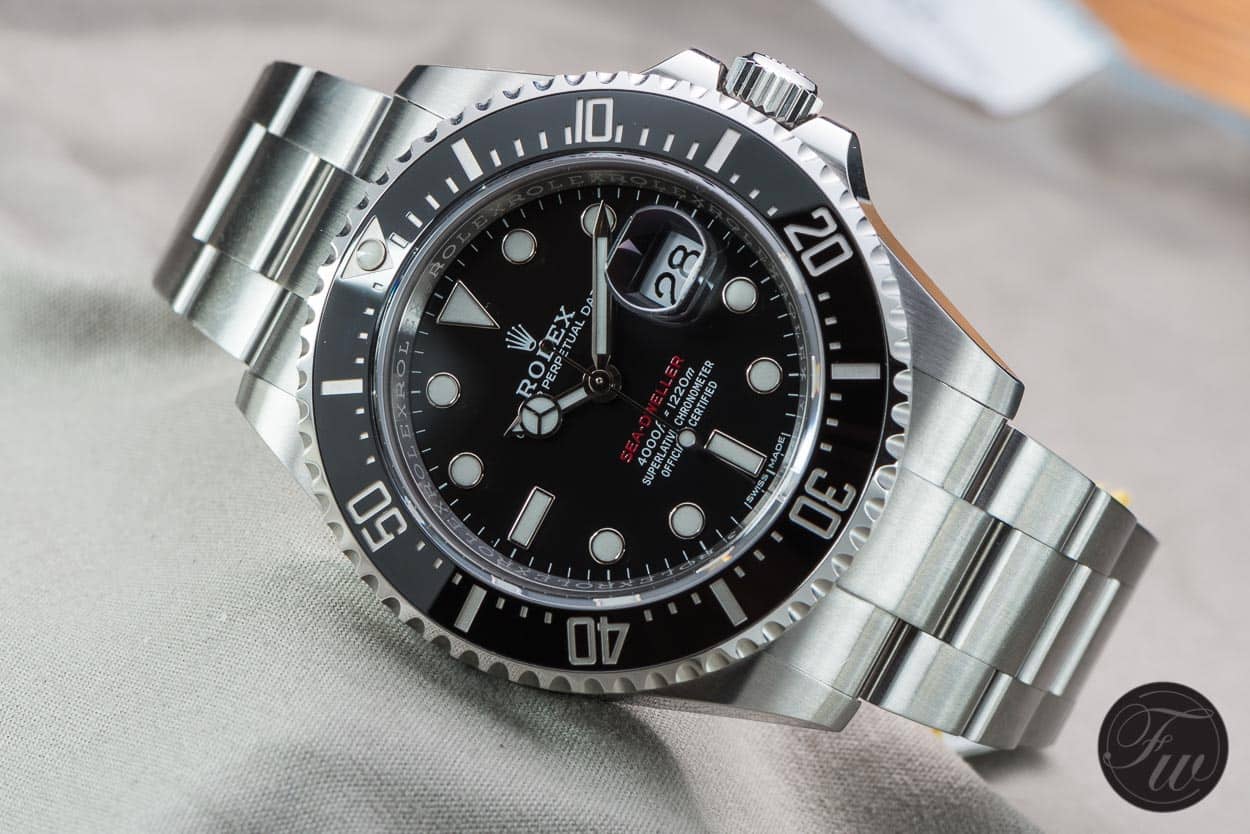 Many enthusiasts were on board with the Sea-Dweller 4000. It had the perfect diameter, good looks, and paid tribute to the past while remaining a modern tool watch. Alas, Reference 116600 was short-lived. Only three years later, in 2017, Rolex unveiled the new 43mm Sea-Dweller, Reference 126600. The SD4K was no more. A good reminder to all our passionate readers that we are the minority when it comes to overall watch purchases. The majority of the buying public is not interested in maintaining traditions. Rolex caters to major markets and wastes no time in stopping the production of flailing models.

But was the latest Sea-Dweller a worthy successor to the SD4K? The new Sea-Dweller matches the depth rating of 1,220m of the Sea-Dweller 4000. Yet, we now have a substantial 43mm case. And this is for a good reason. I assume one of the complaints of the SD4K was the disproportionate width-to-height of the case. Expanding the diameter by 3mm equalized the ratio of the case proportions. I believe the extra surface of the larger bezel also made it easier to grip when wearing gloves necessary for deep-water diving. 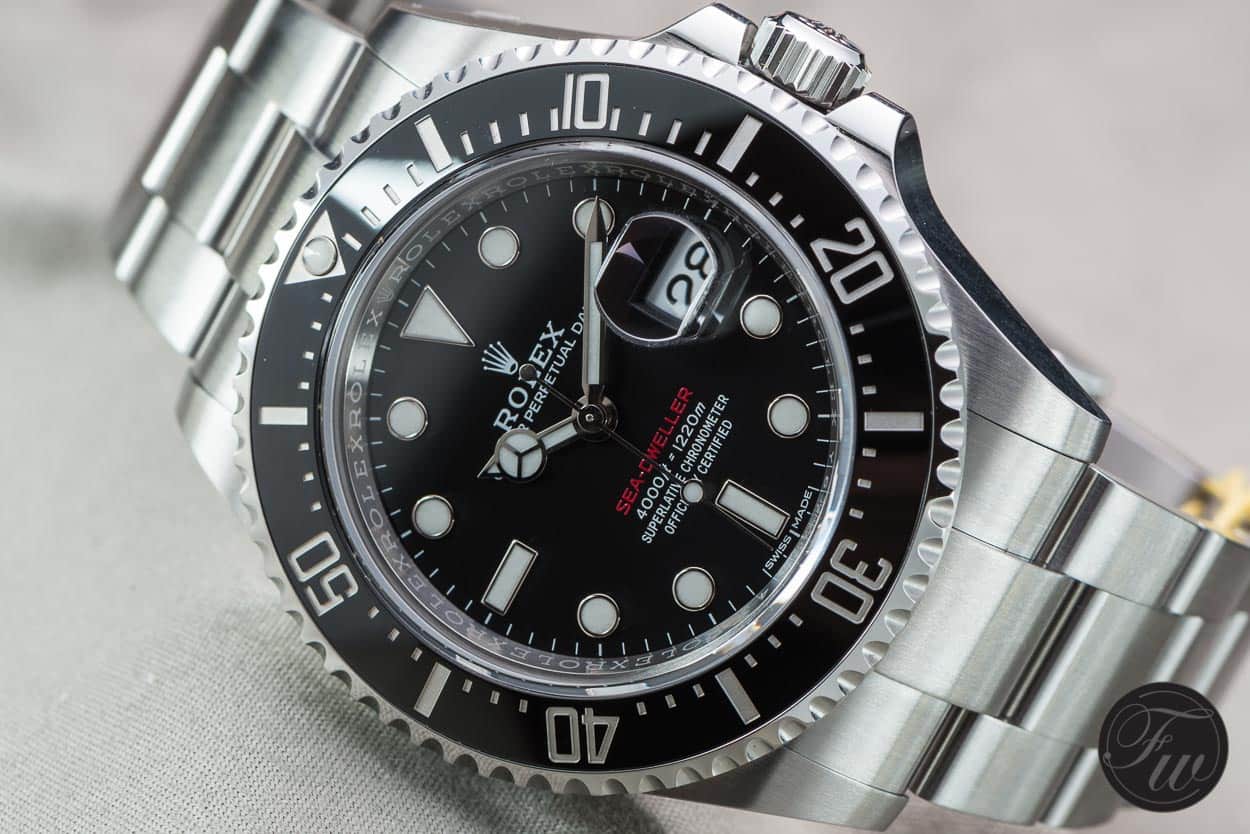 Ok, I’ll stop ignoring the elephant in the room. The most noticeable update to Reference 126600 was the addition of the date magnification. This was a first for the Sea-Dweller range. At the time, the reaction was quite negative. Even I was surprised Rolex stuck a cyclops on the glass. The Sea-Dweller not having it was a distinguishing feature that gave the option for those who wanted the date and a flat crystal. Over time, the mutual disdain has simmered down to a low heat and is not as controversial. I could certainly live with the cyclops, if only for one reason: The Sea-Dweller 43mm has the most satisfying bezel operation I have ever felt.

… the single line of red text on the model name “Sea-Dweller”.

120-clicks go by with such a flawless harmony of tension, texture, and resonance. If it gave off an aroma of vanilla, then all the senses would be activated for this Cerachrom bezel. Another stand-out for the Sea-Dweller is the single line of red text on the model name “Sea-Dweller”. This was characteristic of historic models stretching back to 1967. Rolex rarely celebrates anniversaries and rarer still actively advertises its watches as 50-year commemorative pieces; making the latest Sea-Dweller unique amongst the current professional Rolex collection. 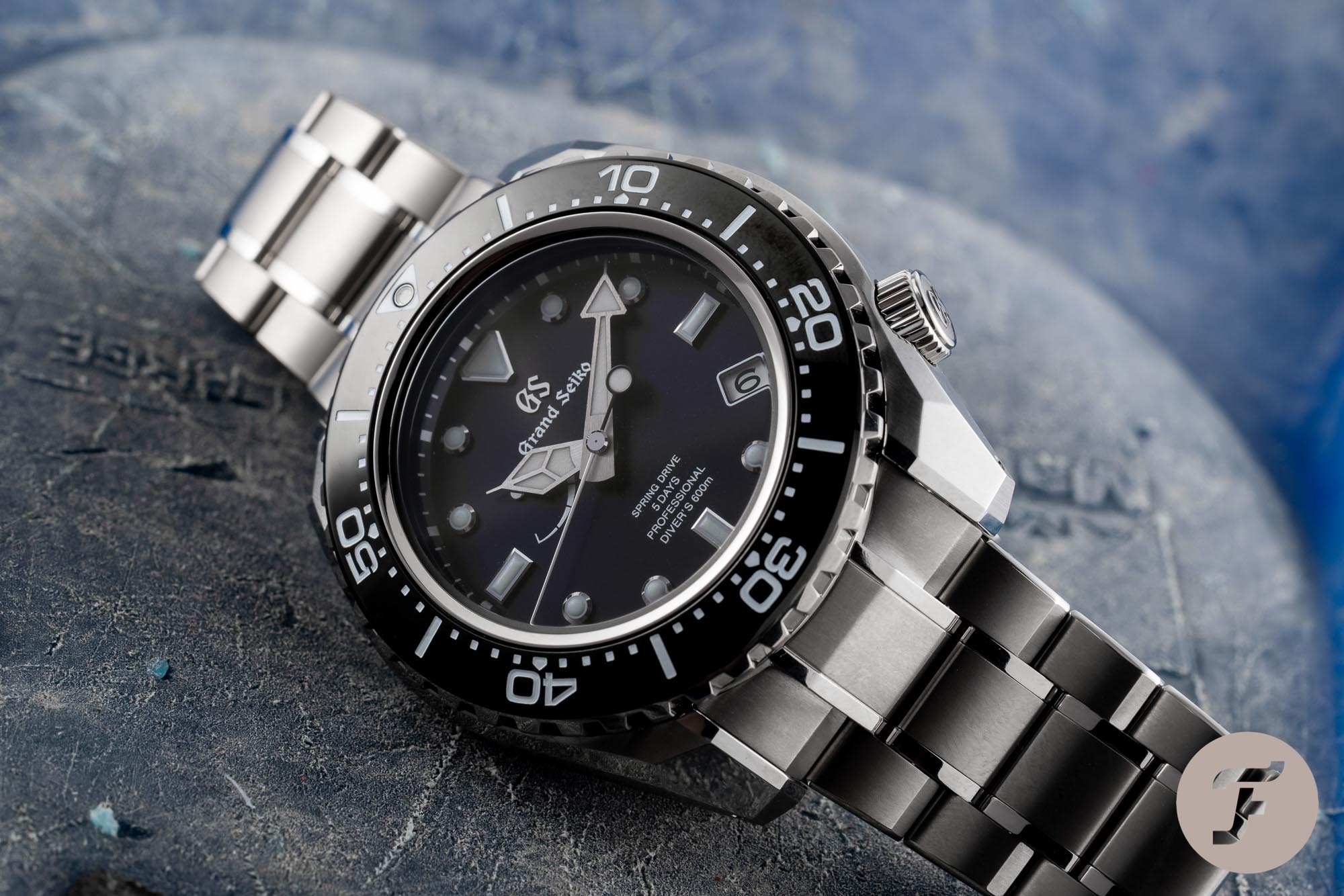 Alrighty then. That was impassioned. I almost shed a tear. Now, look, I know we’ve called a bit of a truce in this column recently, with both writers preferring to focus on the good in their chosen champions while leaving the other guy’s steed alone (for the most part), but I can’t resist this week…

…all the way to Ruinsville.

I’m going to hop right on that elephant in the room and ride him all the way to Ruinsville. The Rolex 126600 is almost my favorite Rolex. It is, in my opinion, almost the best Sea-Dweller of all time. And that’s saying something. It has some strong 40mm competition from the bank-balance-bazookas that came out in and around the famed “double-red” era, but this baby is a peach. 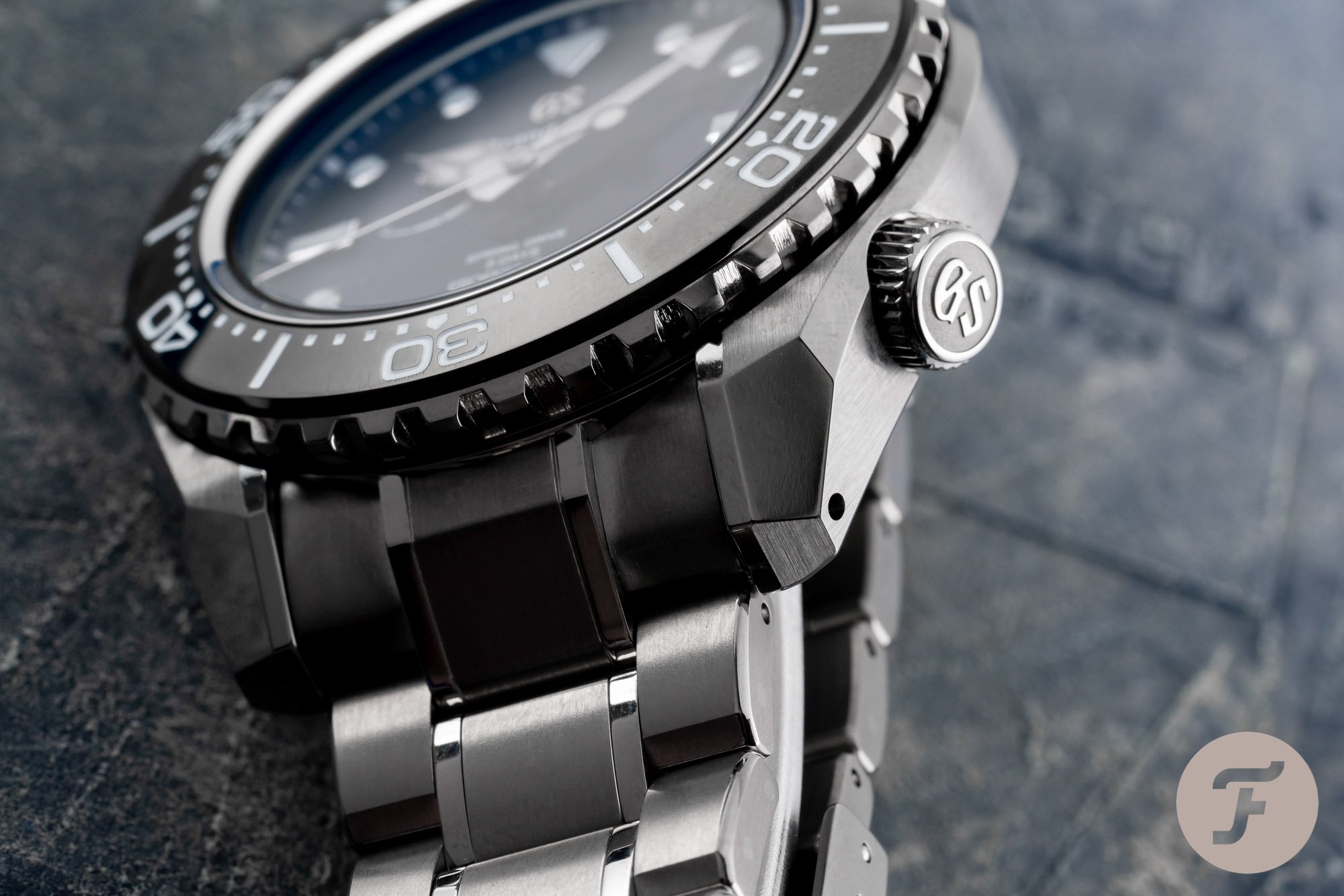 What we have here is basically a souped-up Sub that is actually better thanks to the effect the increased case diameter has on the lug profile. But the thing is, I don’t love the Sub. I like it, yeah (I’m not totally mental), but I do find the modern version leaves me completely cold. And try as I might, I can’t get excited about that cyclops on the Sea-Dweller. There’s just no need for it, for goodness’ sake. This watch is 43mm wide. You can read the god damn date from across the room. And you sure as hell don’t need to know what day it is while you’re trench-treading. If you’re measuring your time underwater in days instead of minutes you’re probably in a lot of trouble…

Ben: Tell that to Ahmed Gabr who took 15 minutes to descend to 332.35 meters and 13 hours 50 minutes to ascend back to the surface. 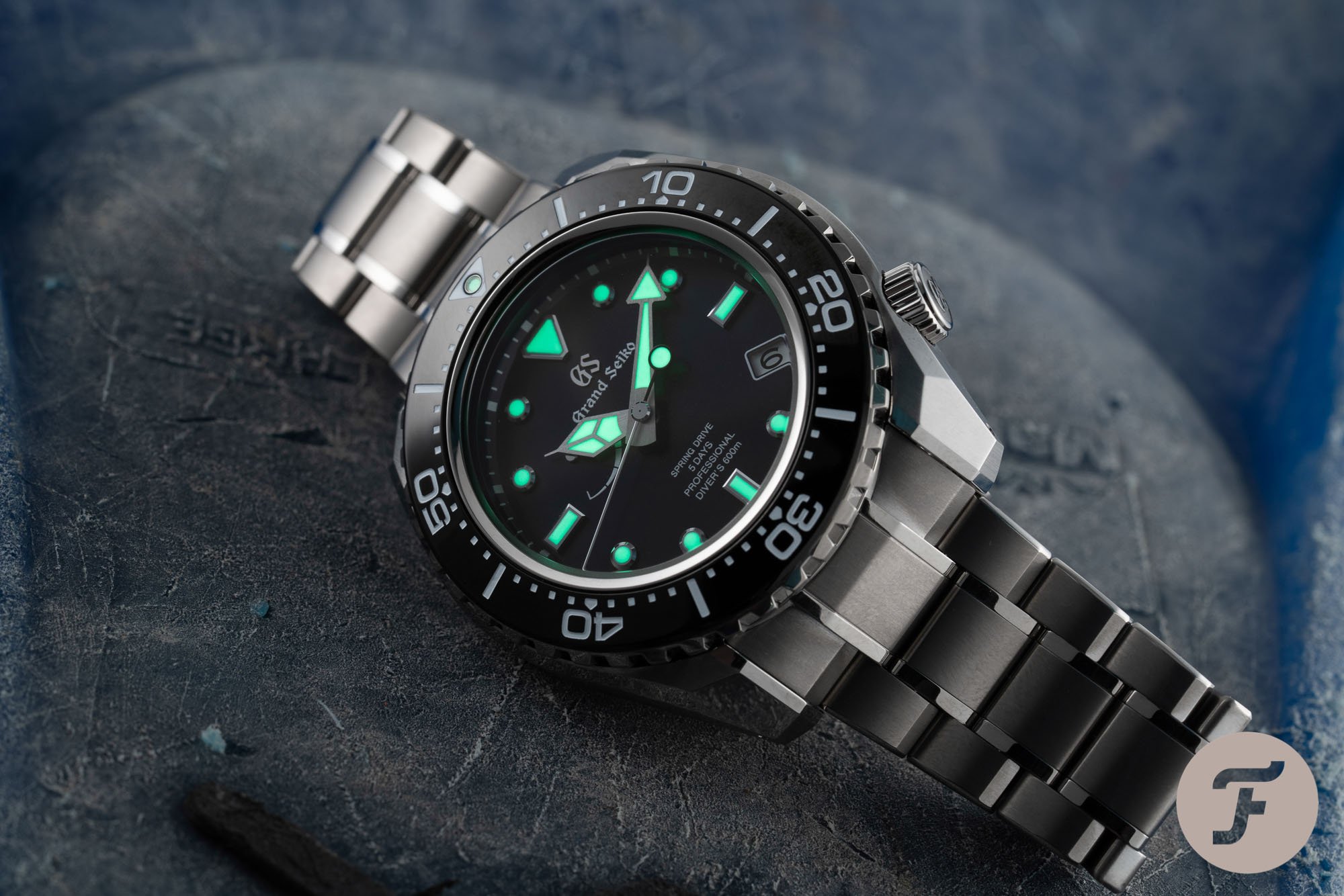 Rob: Sure, sure. That’s a long time. But there are still 24 hours in a day so he could easily have made it down and up in one calendar day. And even if he didn’t, how’s it relevant to his mission?

And while you might think that I’m getting necessarily het-up about just one element of a watch’s — otherwise excellent — design, that’s the whole point of being into watches in the first place. The details. The details are everything. And when you’re talking about classics and potential classics, they are worth even more than their weight in gold.

Which brings me neatly to the power reserve indicator hand on my hero of the week, the Grand Seiko SLGA001. What’s that I hear you say? You haven’t seen the hand before? You can’t see it on Grand Seiko’s soldier shots? Don’t worry. It’s definitely there. Here, take a look below if you don’t believe me 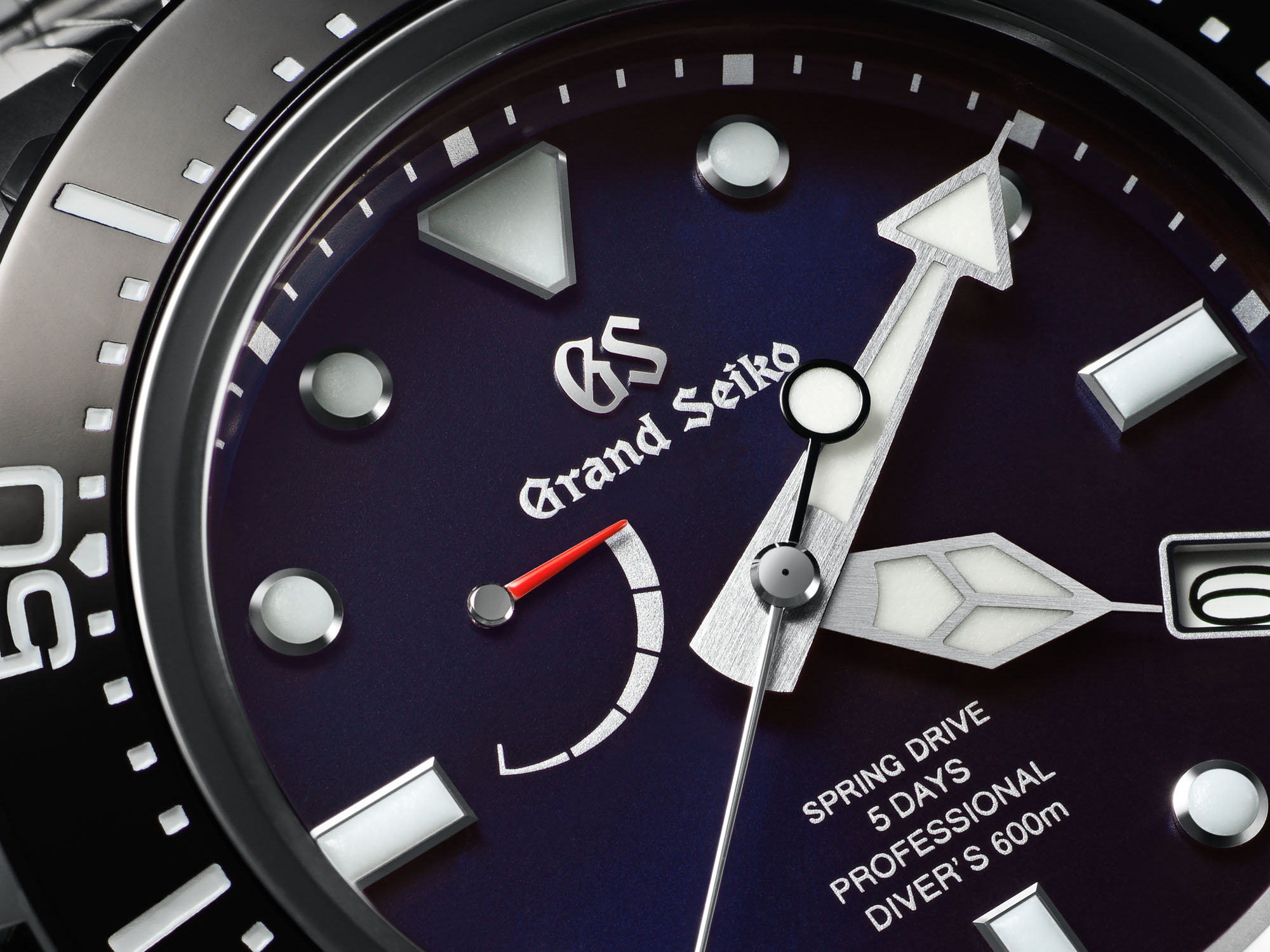 Yes, I know it is often obscured by the minute hand in Grand Seiko’s official images. I like to think of it as Grand Seiko’s attempt at remaining the worst kept secret in the industry. By deliberately covering up one of the most show-stopping uses of color you’re likely to find in a sports watch, the brand has once again — most probably inadvertently — added to its legend.

An uncompromising eccentric, it does things entirely its own way.

I’ve been watching The Last Dance — unsurprising if you know me. I’ve decided that Grand Seiko is the Dennis Rodman of the watch industry. An uncompromising eccentric, it does things entirely its own way. Sometimes, its oddball behavior confuses or amuses us, but it so clearly doesn’t care/realize it bypasses weird at lightspeed and ends up being regarded as a gloriously individual leader we all want to listen too.

And just like Rodman, the Grand Seiko SLGA001 is a winner. It might not have corralled five NBA titles but certainly won my heart. And, I have a sneaky feeling it’s going to win this dust-up too. So how does it stack up against the Rolex? It is a truly massive 46.9mm×16mm and yet, probably thanks to Grand Seiko’s uncanny understanding of ergonomics, sits pretty nicely on medium-sized wrists. Unsurprisingly for a watch of these proportions, its depth rating is an extreme 600 meters.

Keeping this thing running above or below the waves is the 9RA5 Spring Drive caliber. You should know that there are three things I care about in this world: American Sports, the Grand Seiko Spring Drive caliber, and discussing whether or not Björn Borg retired too soon or further galvanized his legend by walking away when he did. Therefore, as the second most important thing in my personal universe, I obviously think this movement is better than the Rolex’s positively anachronistic effort. 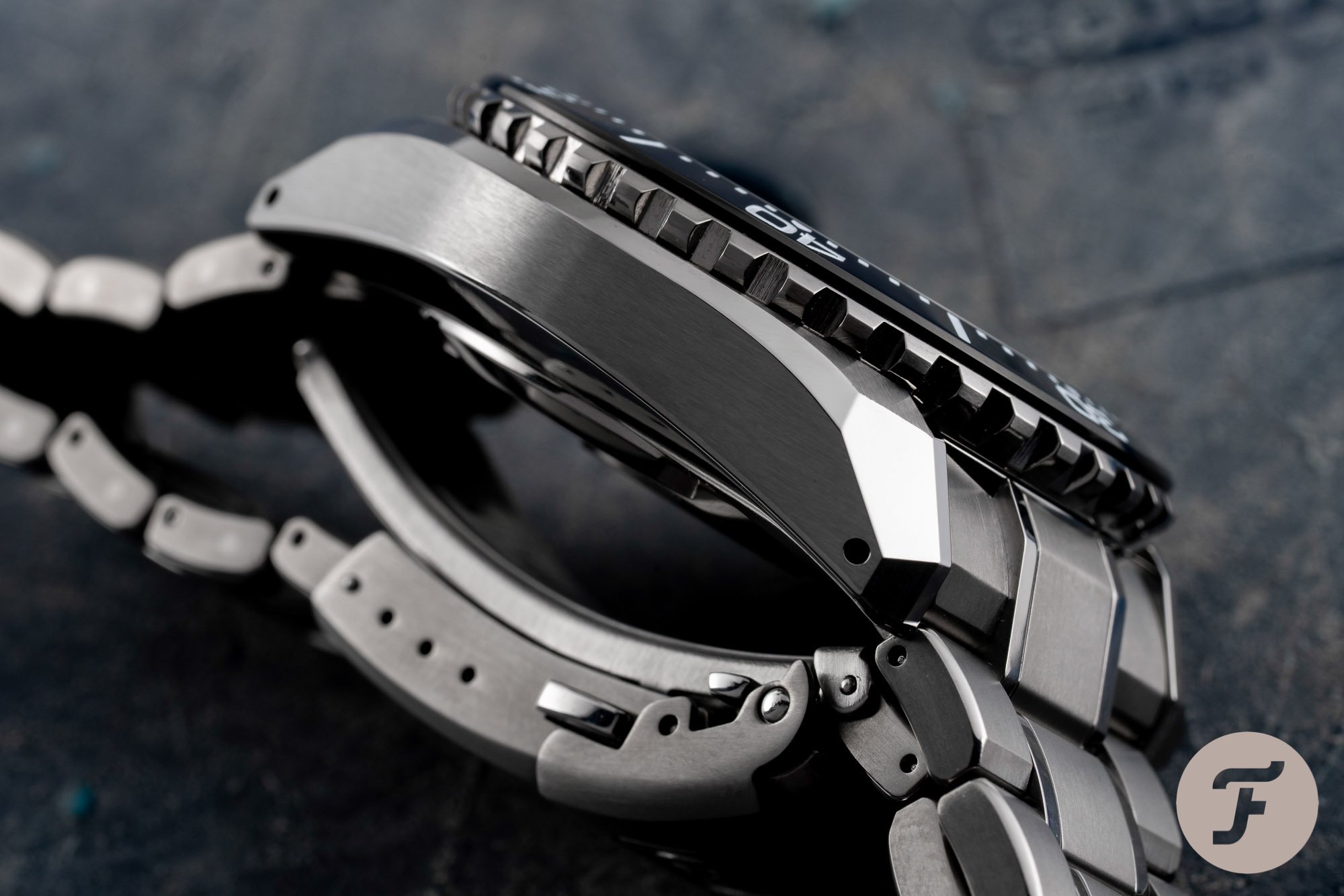 Last time I went up against Ben in the Beater Battle last week, I extolled the performance of Grand Seiko’s regular automatic calibers. I feel the same about the Spring Drive watches to the power of one hundred. There is no movement I would rather have in my collection. You can keep your blued screws, our gold chatons, your hand engraved rotors, or diamond end stones. Give me the best fusion tech our industry has ever seen. And if you don’t mind wrapping it up in a beautiful package, fronted by an alluring deep purple dial that would be great. Oh, you already did? In that case, I’ll take two. My buddy Ben’s going to be needing one soon anyway…