I admit I was a Sega kid. Only later did I purchase a Nintendo and realize that I had missed some great classics. Mario Kart is one of the later-discovered titles that I loved best — and I still do. Now that I have a Nintendo Switch in the house, I find myself playing the game with my daughter on rainy autumn days. It’s a great one, especially with two players, and it’s always a lot of fun. 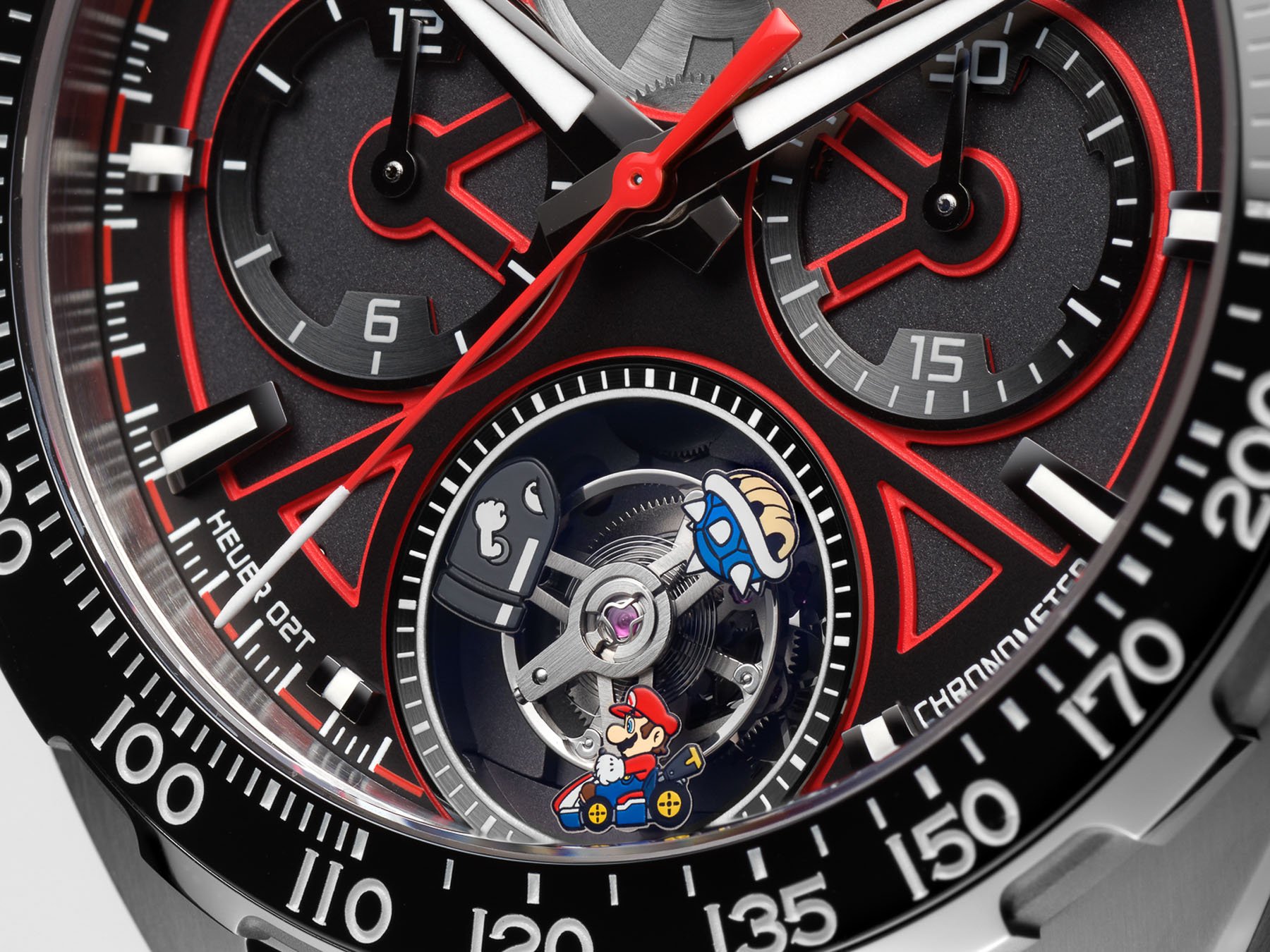 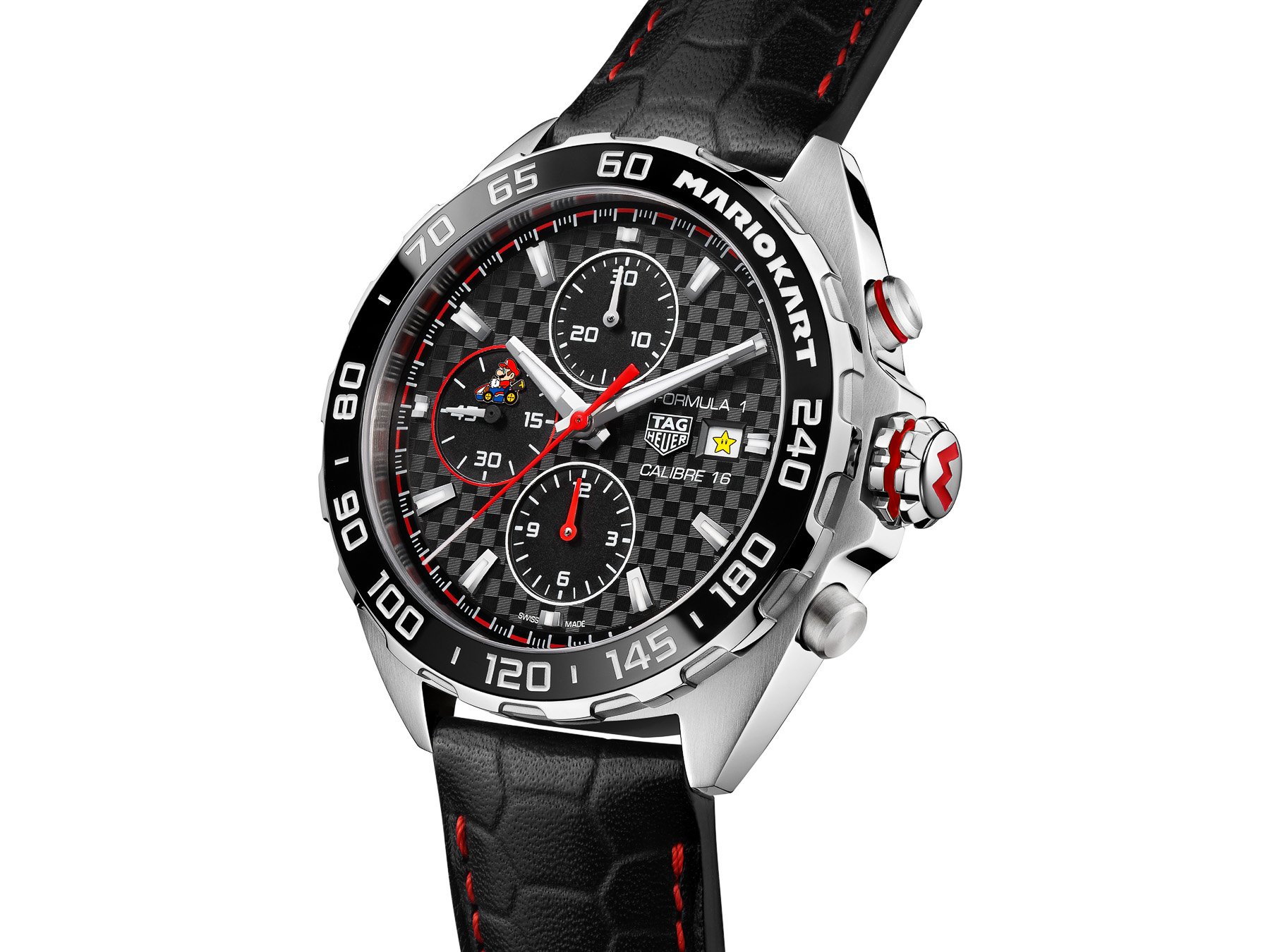 The TAG Heuer Formula 1 × Mario Kart Chronograph is powered by caliber 16 (based on ETA’s 7750 or Sellita’s SW500) and is limited to “just” 3,000 pieces. The 44mm case is made of stainless steel, and on the case back, you will find an engraving of the Mario Kart logo. The carbon-look dial has the classic caliber 7750 layout with sub-dials at 12, 6, and 9 o’clock. You’ll find Mario in his kart in the 9 o’clock sub-dial on the dial, and — how fun! — the date aperture will regularly show items from the game instead of the date. 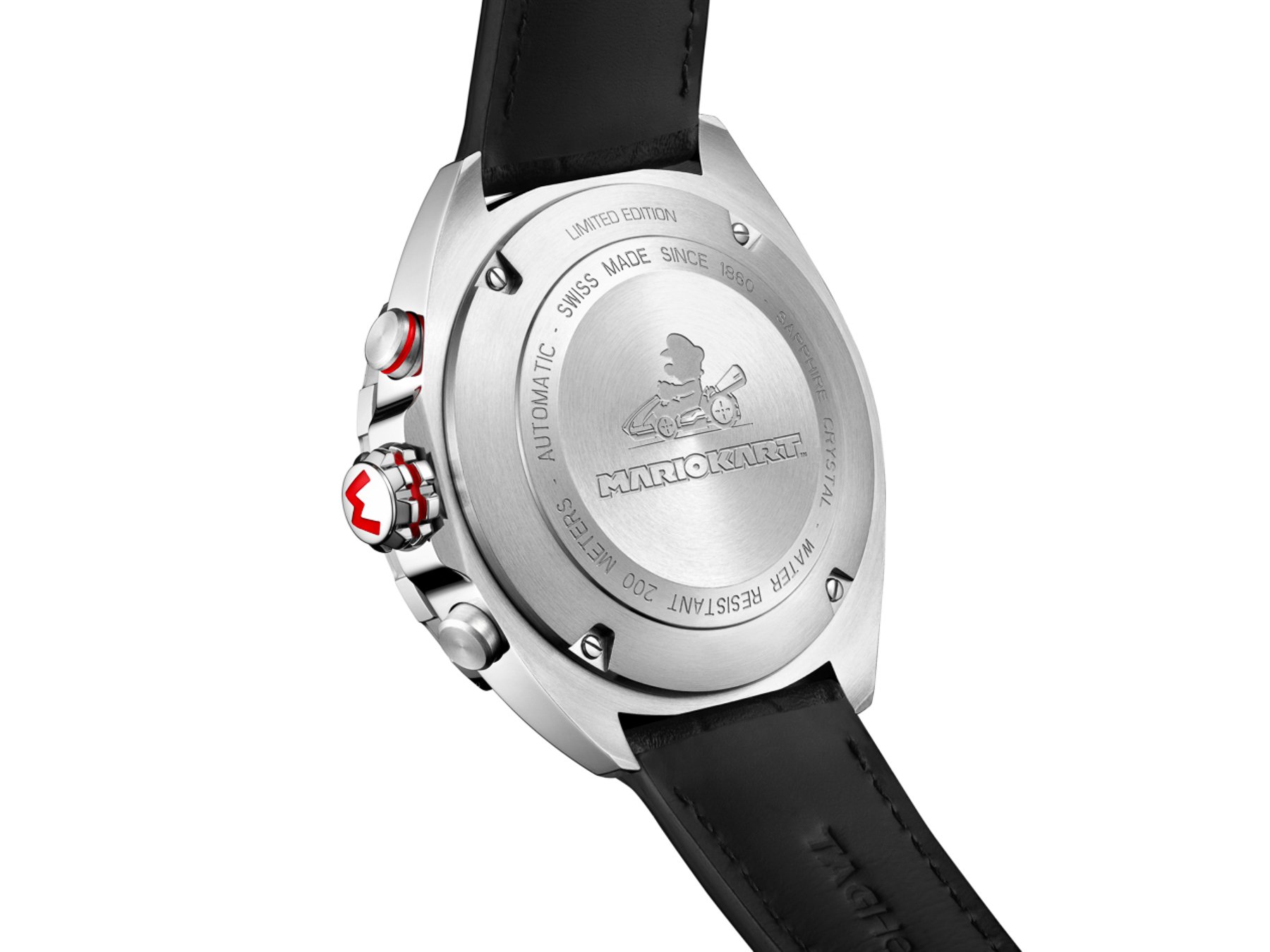 The crown has the red “M” engraving on it, reminding you of the little plumber. The price of this watch will be €4,150 (US$4,300). The Mario Kart Chronograph is water-resistant to 200 meters. 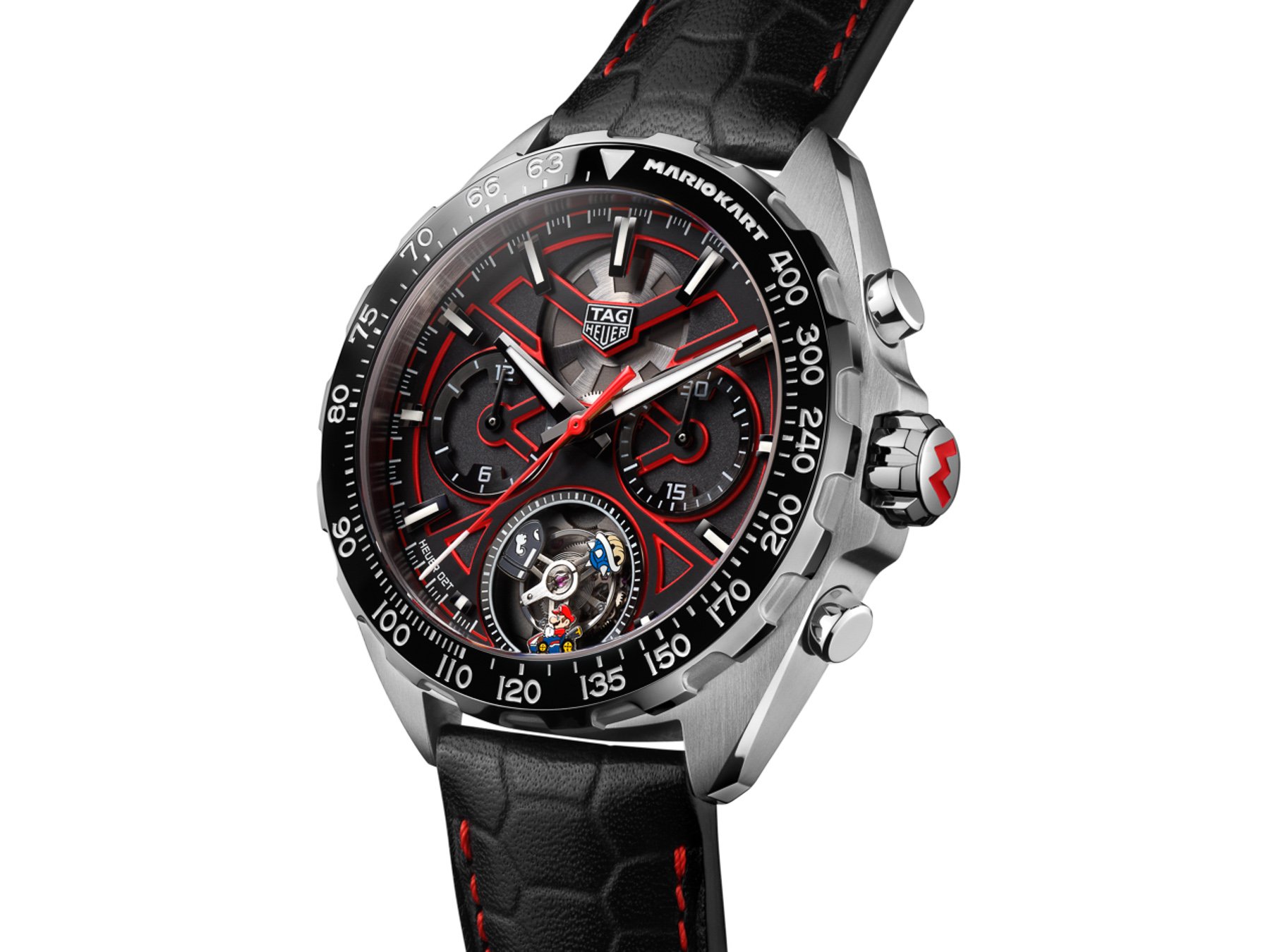 Then, there’s the TAG Heuer Formula 1 × Mario Kart Chronograph Tourbillon, which is limited to 250 pieces. The hardcore Mario Kart fans that want to own one of these will need to shell out €24,750 ($25,600). Its 45mm case is made of Grade 5 titanium, and the sapphire case back will show the Heuer 02T movement. Additionally, the sapphire crystal on the back has been laser engraved with the Mario Kart logo. Pretty awesome! The movement offers not only a chronograph and a tourbillon; it has also been chronometer-certified by COSC. 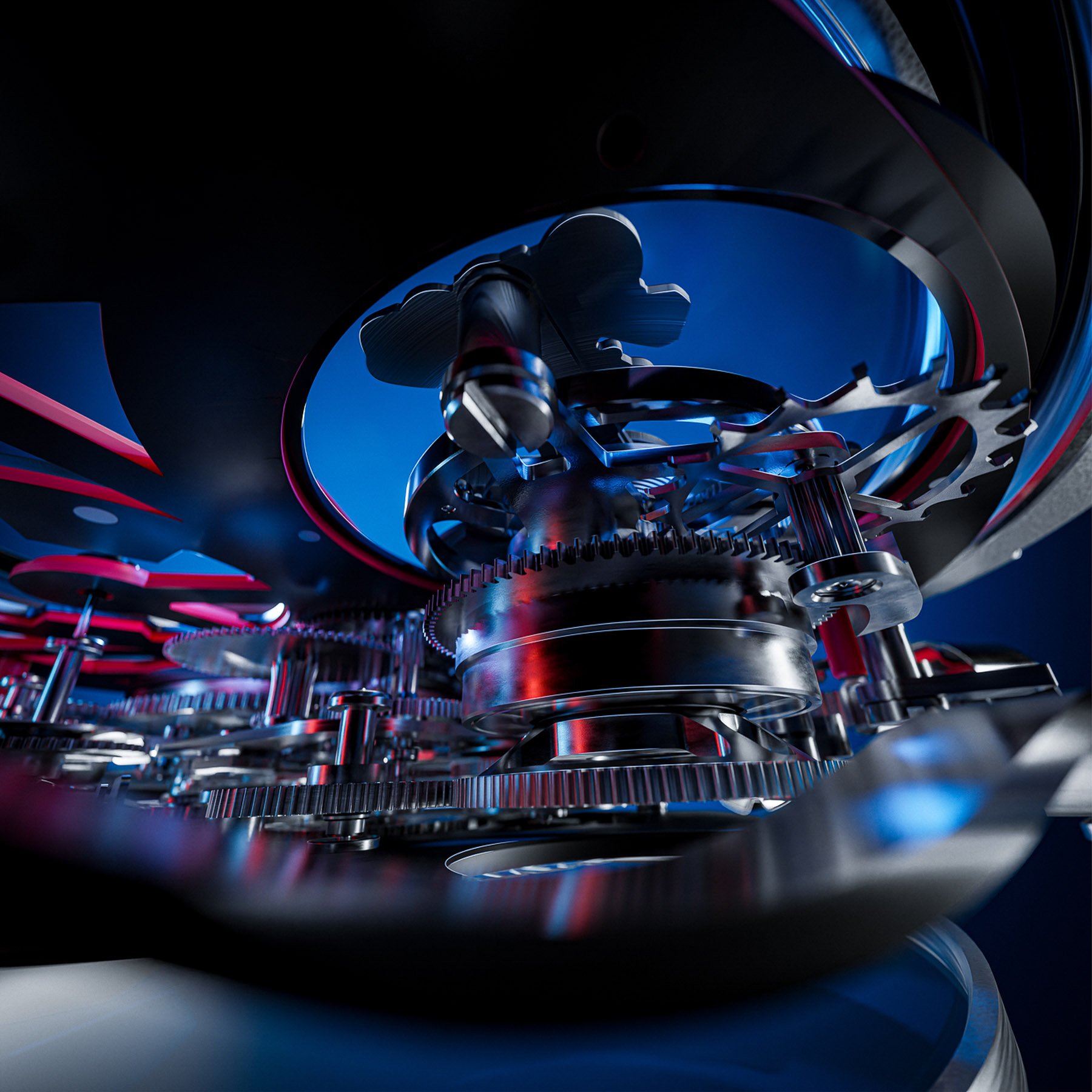 The dial is skeletonized, giving you a nice view of the Heuer 02T movement. At 6 o’clock, you will see the tourbillon cage, showing Mario in his kart, a Spiny Shell, and Bullet Bill. The Mario Kart Chronograph Tourbillion is water resistant to 100 meters. Both watches will become available this month (October 2022).

Now, I understand that using Mario Kart is fun on a watch. Even when a watch has a substantial price tag, there’s still room to use a video game or comic character on it; to each his or her own. Remember that this has been done for decades, as Ingersoll and Mickey Mouse go back to the 1950s. 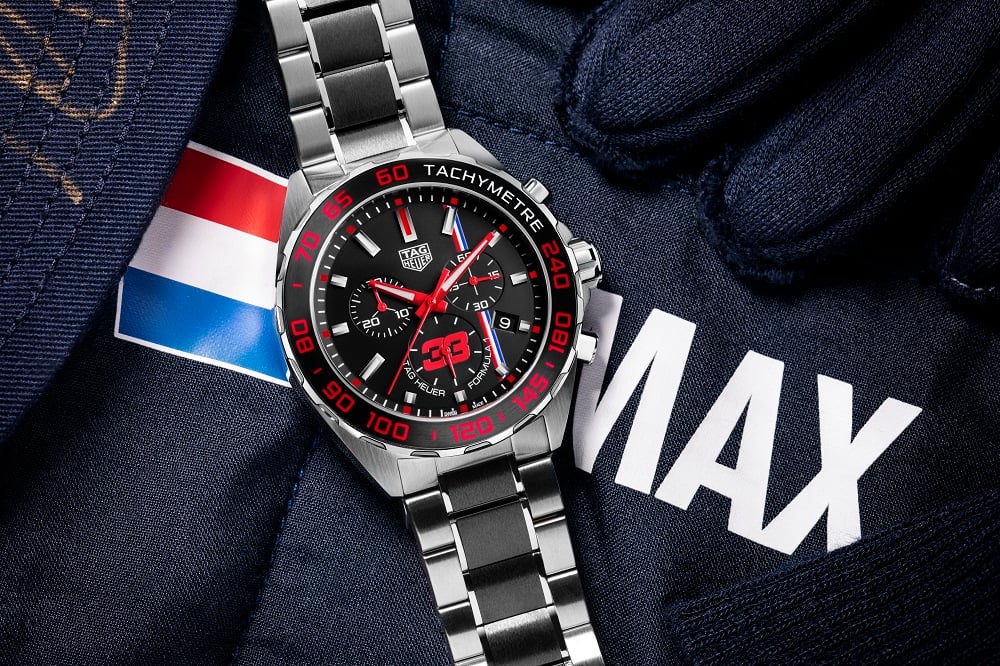 What I don’t quite understand is why TAG Heuer chooses to go Mario Kart rather than the brand’s most prominent wearer today, Max Verstappen. Yes, you know, the two-time F1 World Champion, who wears a TAG Heuer every race weekend. In the past, there have been TAG Heuer Formula 1 watches dedicated to Max Verstappen, and earlier this year, the brand released a Formula 1 Red Bull watch. But there has been no TAG Heuer model dedicated to Max Verstappen since he got his first championship. And this year, 2022, TAG Heuer could have seen it coming even at an early stage, but all we got was a post from the brand on Instagram. 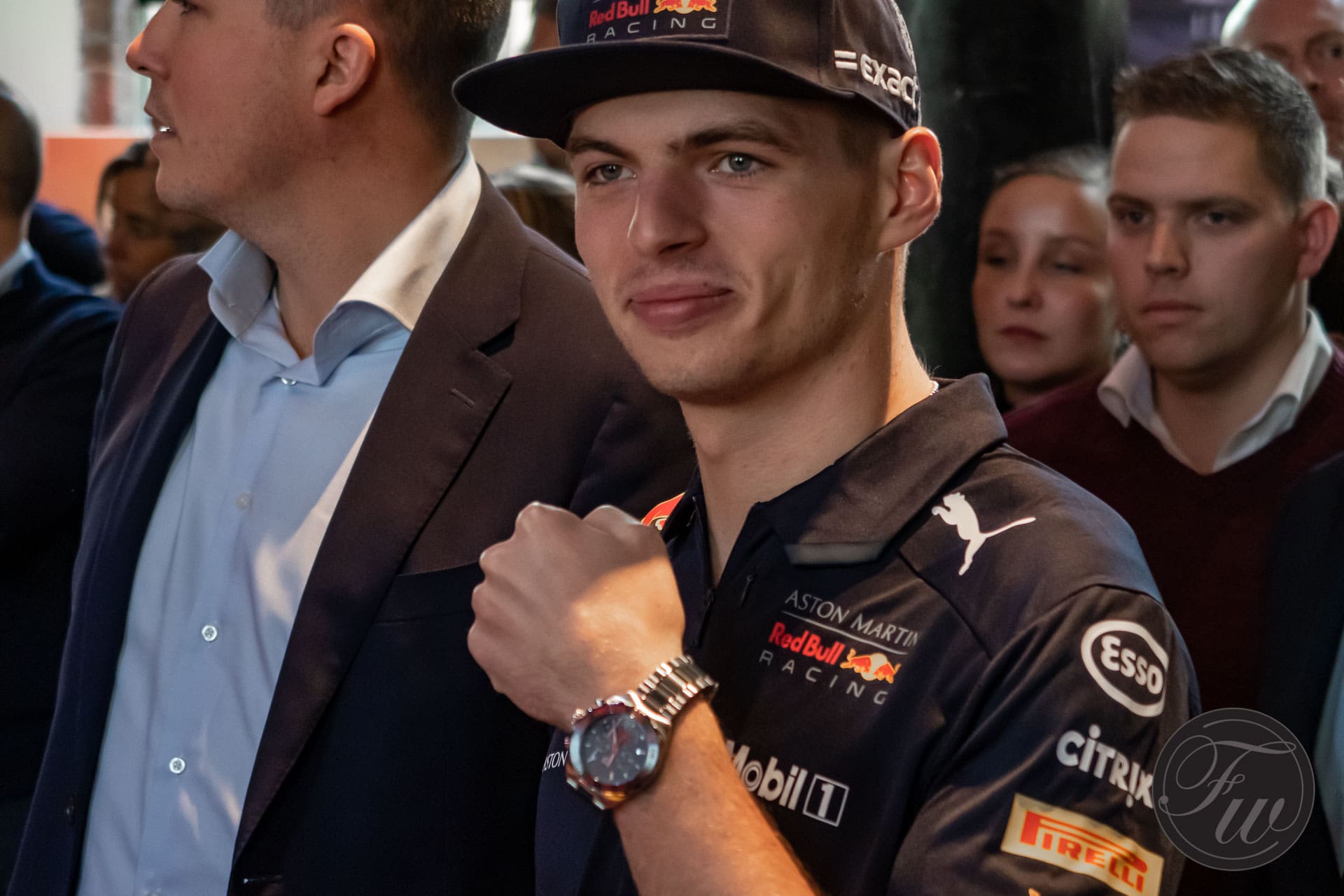 If my memory serves me correctly, I’ve seen a message from IWC’s PR department every time Lewis Hamilton did something cool or won something important. Why don’t you see any cool stuff with Max Verstappen from TAG Heuer? I know Lex already made the point, but this latest release made me want to insist that TAG Heuer should create a signature piece for the Formula 1 champion. 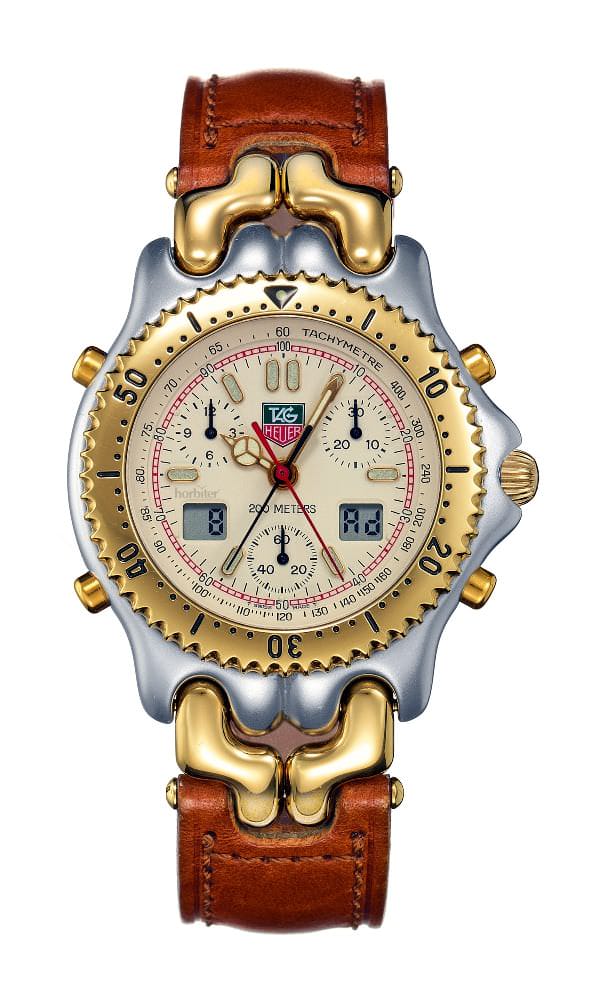 Rumor is that Max Verstappen doesn’t want to commit to a TAG Heuer watch without compensation or at least has a certain number in mind that TAG Heuer is not willing to pay. On private occasions, Verstappen can be seen wearing a gold Rolex Daytona on a rubber strap or even an Audemars Piguet Royal Oak. TAG Heuer has been tremendous in F1, and even though Rolex is one of the main sponsors, TAG Heuer, and the brand’s iconic logo, will forever be connected to Formula 1. This is, in no small part, due to the brand’s long-time sponsorships of some of the best teams and drivers, especially Ayrton Senna. 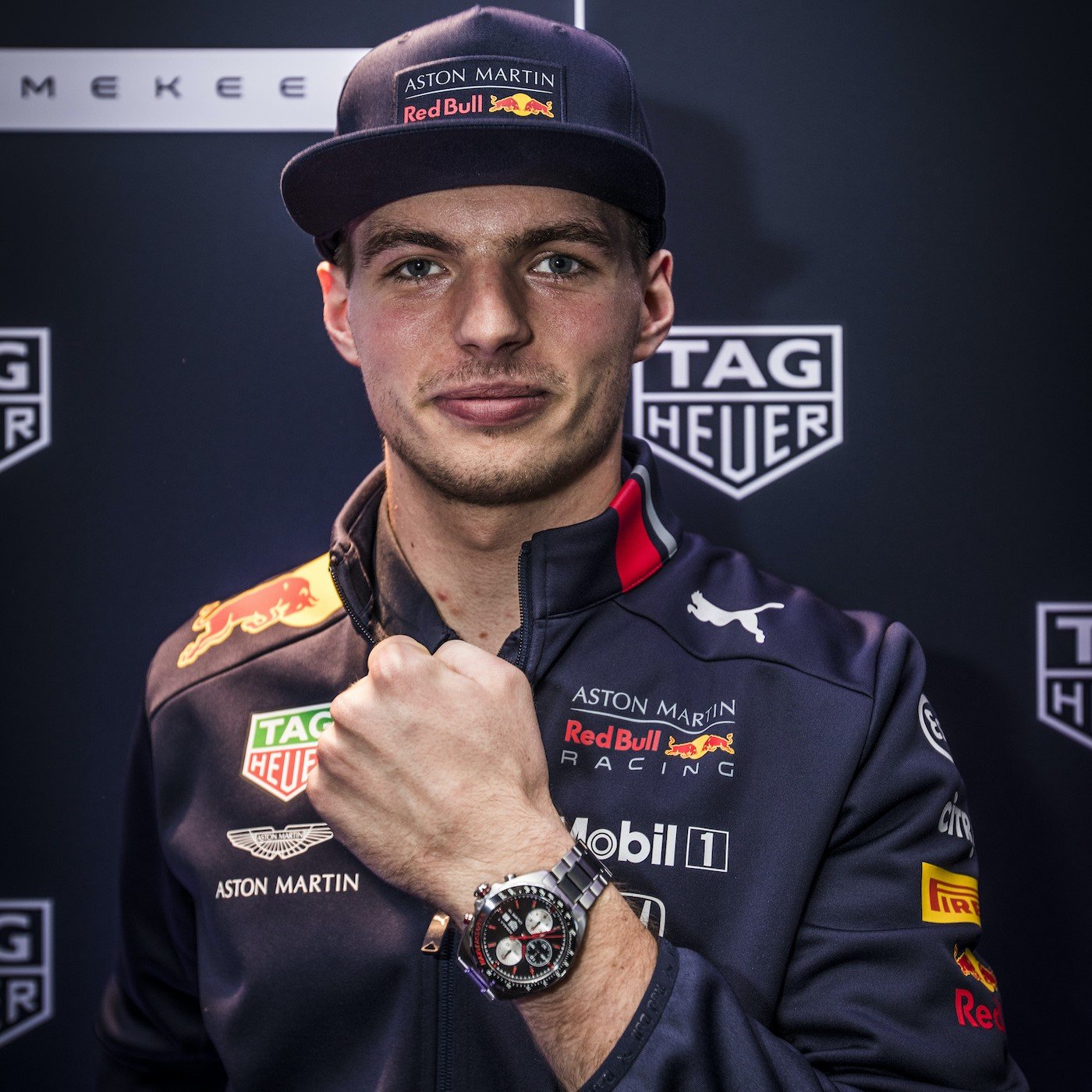 The TAG Heuer Formula 1 watches for Max Verstappen (one showing his former car number 33 on the dial) were released before his time as an F1 World Champion. And although there’s still time to celebrate his second World Champion title with a TAG Heuer watch, it’s just a missed opportunity that he didn’t get one for his first title.

Come on, TAG Heuer, you can make it happen!