In the 160th year of Heuer’s existence, TAG Heuer has graced us with a string of Carrera releases. The year started with the Carrera Silver Dial Limited Edition. In June, we saw the release of the Carrera Montreal Limited Edtion. And today sees the brand releasing the new Carrera Sport Chronograph 160 Years Special Editions. These two new timepieces are the first limited editions based on the new Carrera Sport Chronographs equipped with the Heuer 02 manufacture movement. And they are an homage to a great Heuer classic from the 1960s.

To close out this celebratory year, TAG Heuer combines the past and the present by using the new 44m Carrera Sport Chronograph as the base to develop two limited editions inspired by the 1965 Heuer Carrera “Dato 45”. 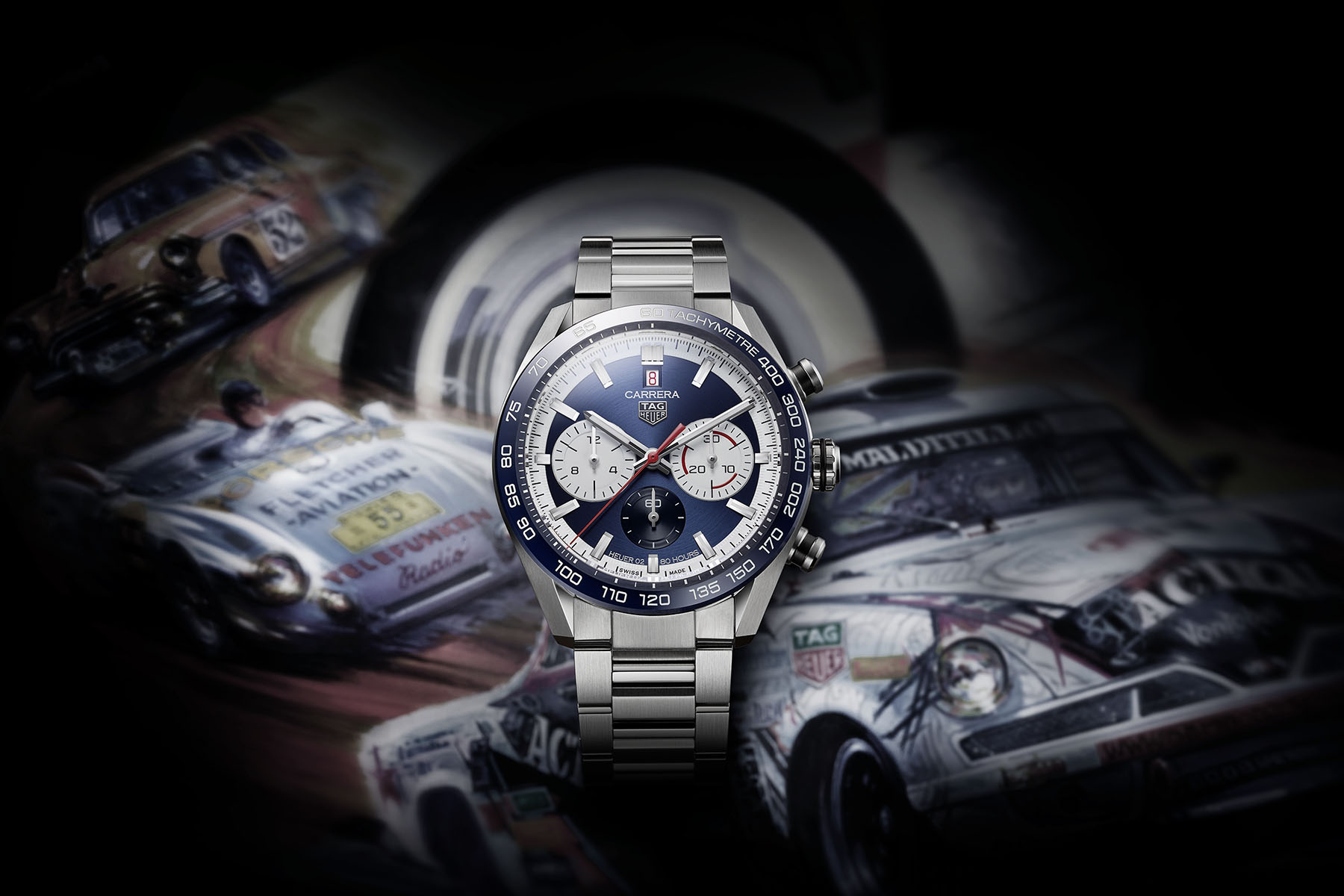 The final limited editions for 2020

Like so many, I also have great respect for the rich (TAG) Heuer history. That’s why I was impressed by the release of the Carrera 160 Years Silver Limited Edition back in January. It’s a beautiful watch that pays homage to the original 1963 Carrera as designed by Jack Heuer.

The second limited edition was the colorful Carrera 160 Years Montreal Limited Edition released in June of this year. It’s a bit too bright for my taste, to be quite frank. But it certainly is a watch that screams celebration, and that’s why it fits the occasion perfectly. 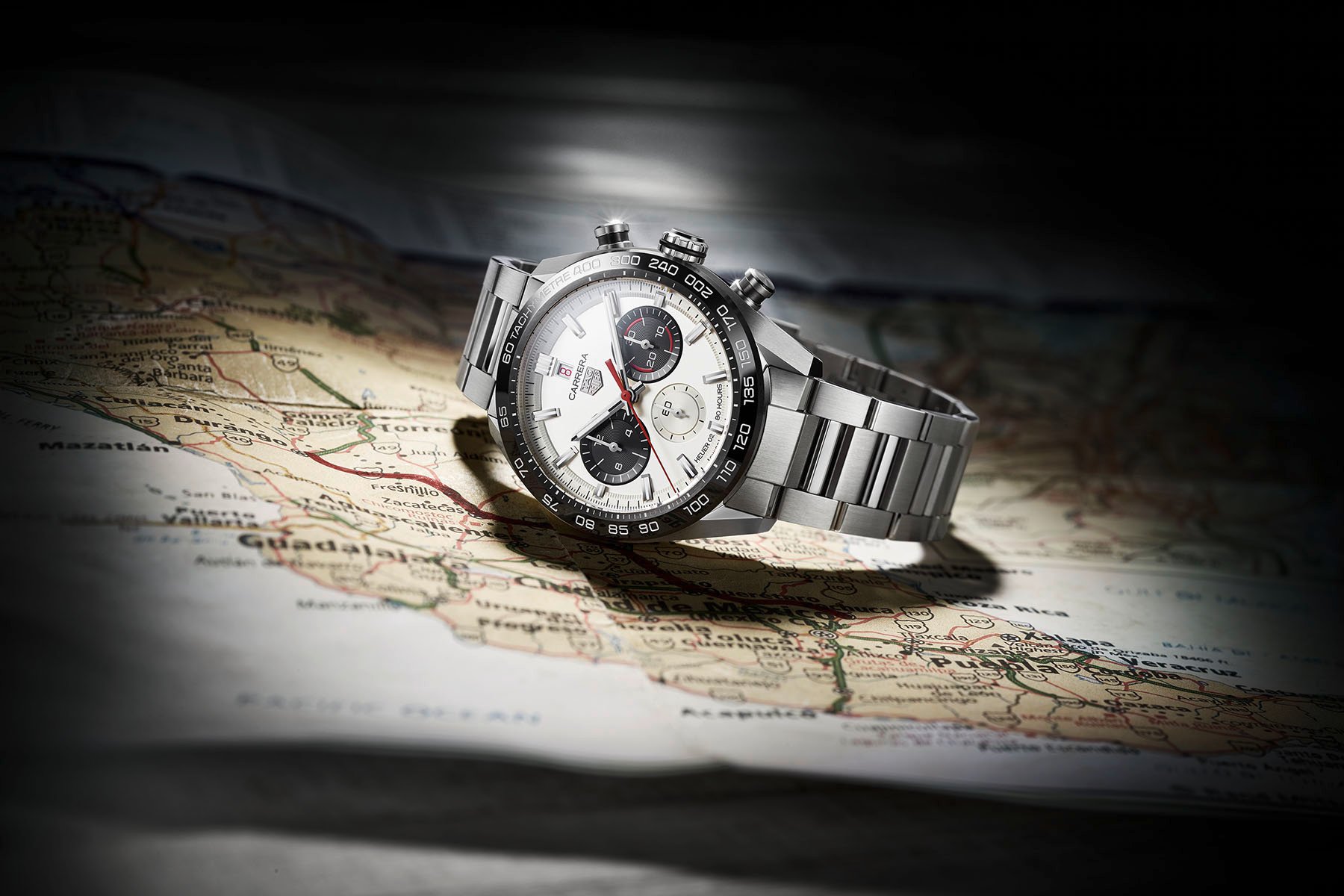 I like that TAG Heuer did not come up with another modern reinterpretation of one of its classics for the final limited editions of the year. Especially in a year where you look back, it can be tempting to release a string of icons from the past. And sometimes that seems just a bit too easy.

Two limited-edition Carrera Sport Chronographs that take inspiration from the past.

That’s why I like that TAG Heuer has chosen to release two limited-edition Carrera Sport Chronographs that take inspiration from the past. They are very much modern watches in their presence and technique but feature a remarkable detail from the days of yore. 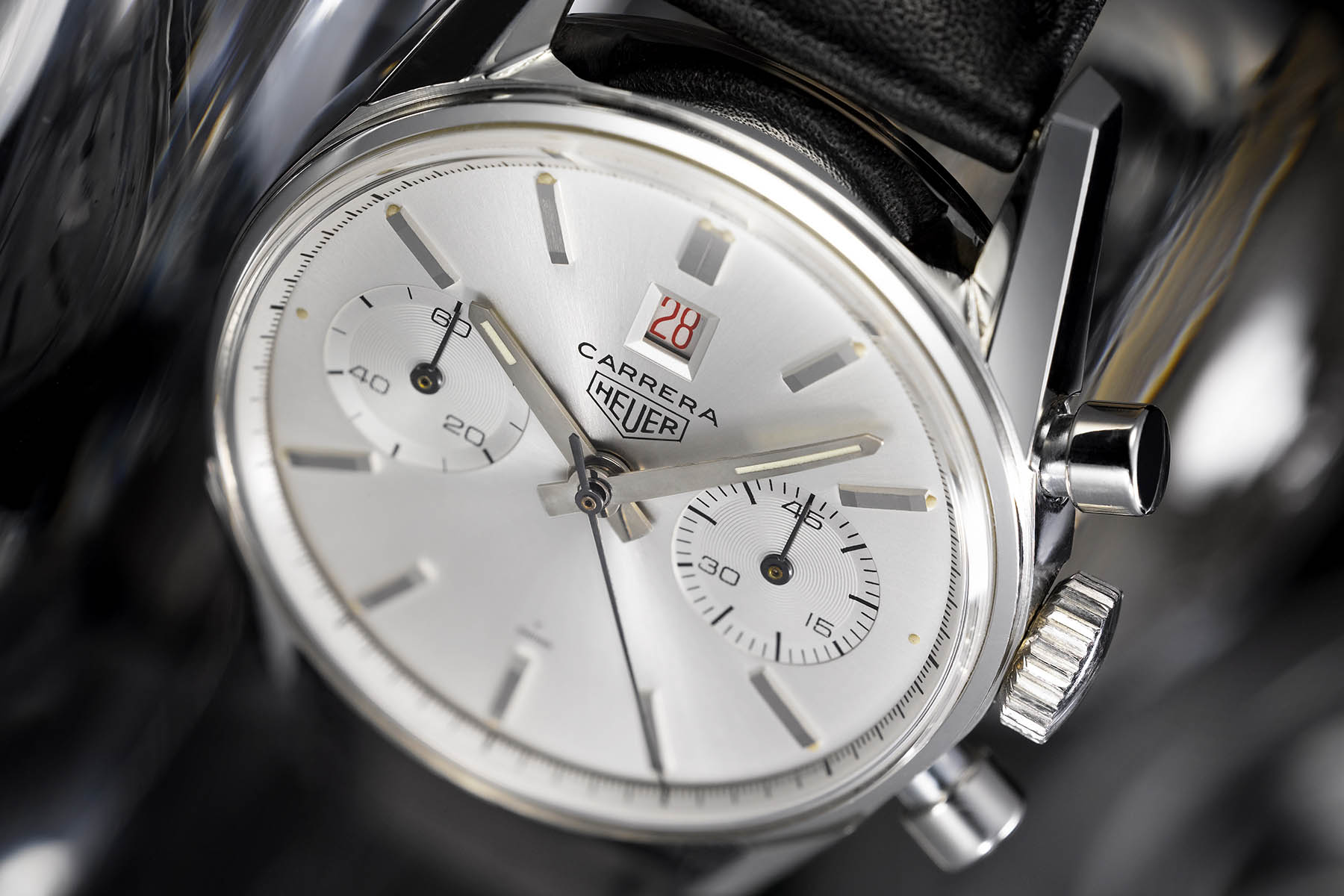 These new Carrera Sport Chronograph 160 Years Special Editions take inspiration from the 1965 Heuer Carrera “Dato 45”. An iconic watch from the past that was powered by Landeron caliber 189. The “Dato 45” name refers to the 45-minute sub-dial placed at 3 o’clock.

The second execution of the watch saw the date moved to the 9 o’clock position.

In 1965 Heuer took care of that visual challenge by using a very slim chronograph seconds hand and a white date disc with contrasting red numbers. Having said that, the second execution of the watch saw the date moved to the 9 o’clock position, thus removing the running seconds sub-dial. So to state that the placement was optimal would be incorrect.

The original version of the “Dato 45” has become sought after by Heuer collectors. In general, prices for a vintage piece start at roughly 10k and increase depending on the condition of the watch. 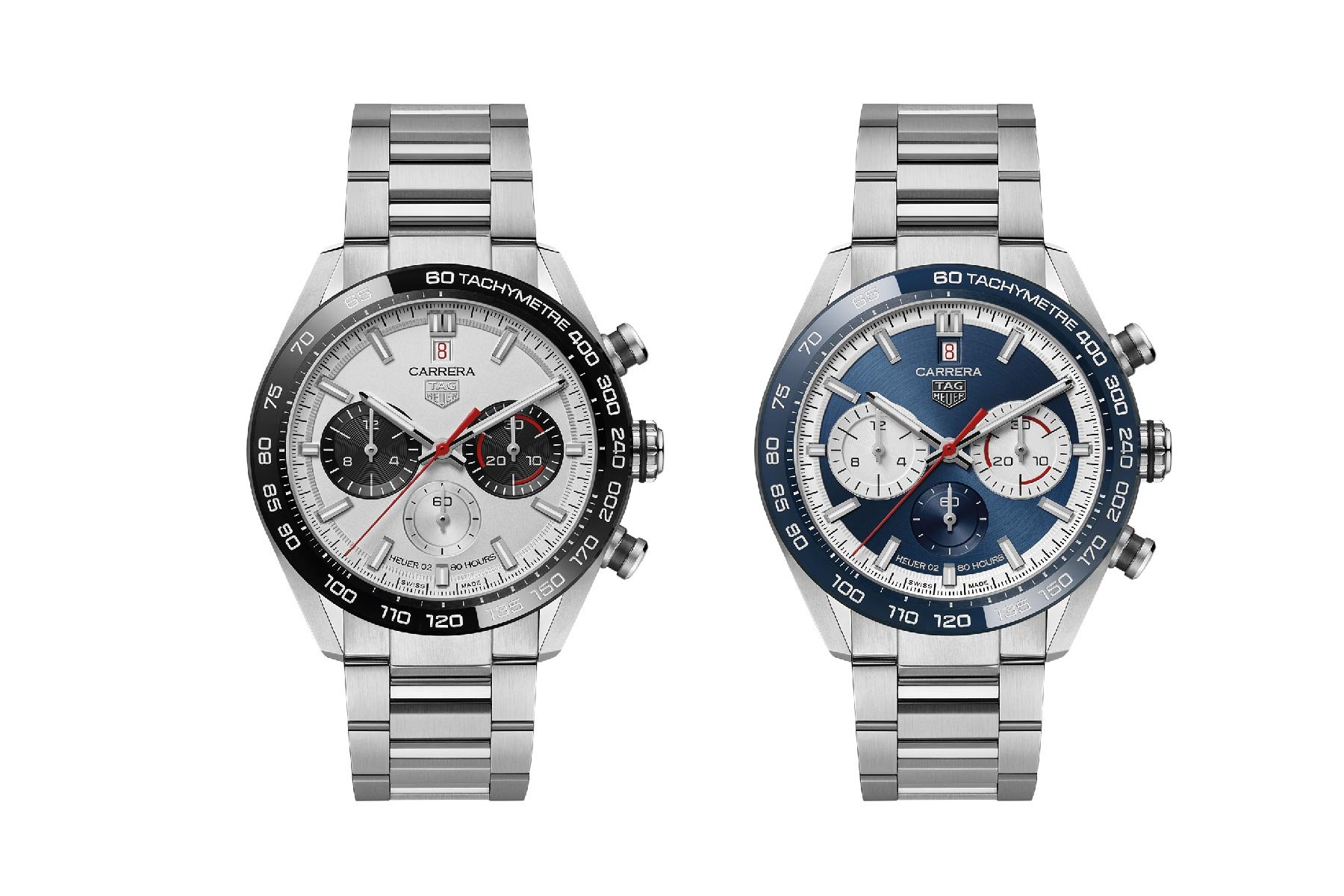 For the Carrera Sport Chronograph 160 Years Special Editions, TAG Heuer decided to re-introduce the placement of the date at 12 o’clock. And to make sure the date is visible, the brand also used a white date disc and contrasting red numbers. The most significant difference compared to the original Carrera “Dato 45” is the use of a red chronograph seconds hand.

This will be a piece for collectors that love this quirky feature.

Which raises the question: what happens if the chronograph is not active, and the red hand is in front of the date indication? I would have loved to see at least one press image with the chronograph seconds hand in front of the date to witness the impact. Then again, these two pieces bring homage to the 1965 Carrera “Dato 45,” so this will be a piece for collectors that love this quirky feature. 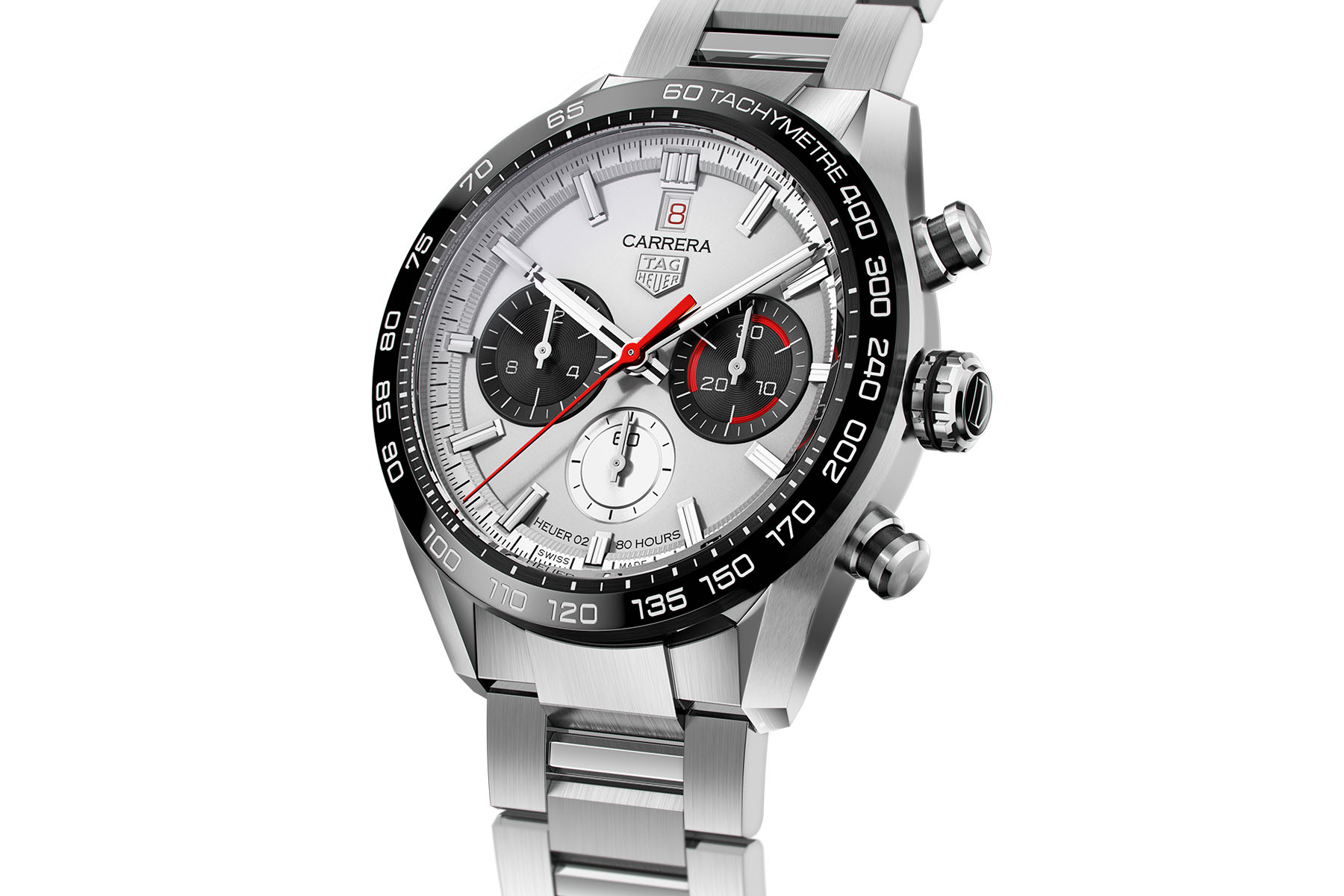 There are two different versions available of the Carrera Sport Chronograph 160 Years Special Editions. The first is a stainless steel version with a white dial and a black ceramic bezel. The dial features two black minute and hour chronograph counters, placed at 3 and 9 o’clock. The minute counter has small red elements that correspond with the red date indication and chronograph hand. The third sub-dial is a white permanent seconds indicator positioned at 6 o’clock, 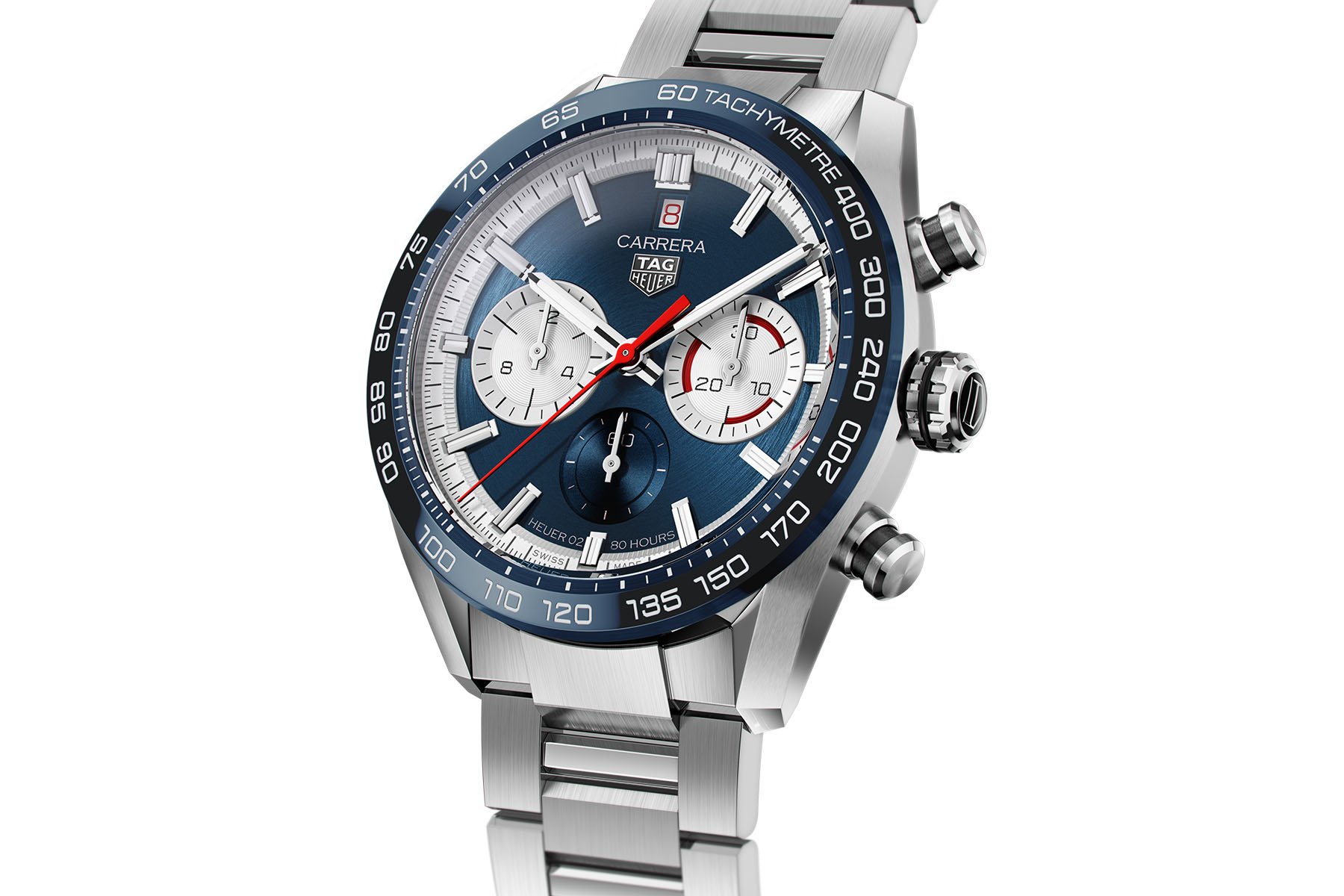 The second version (also stainless steel), features a blue circular brushed dial and a blue ceramic bezel. This dial features contrasting white minute and hour chronograph counters, placed at 3 and 9 o’clock. As with the black and white version, the minute counter at 3 o’clock features small hints of red. Lastly, the sub-dial featuring the permanent seconds indicator placed at 6 o’clock is the same blue color as the dial. 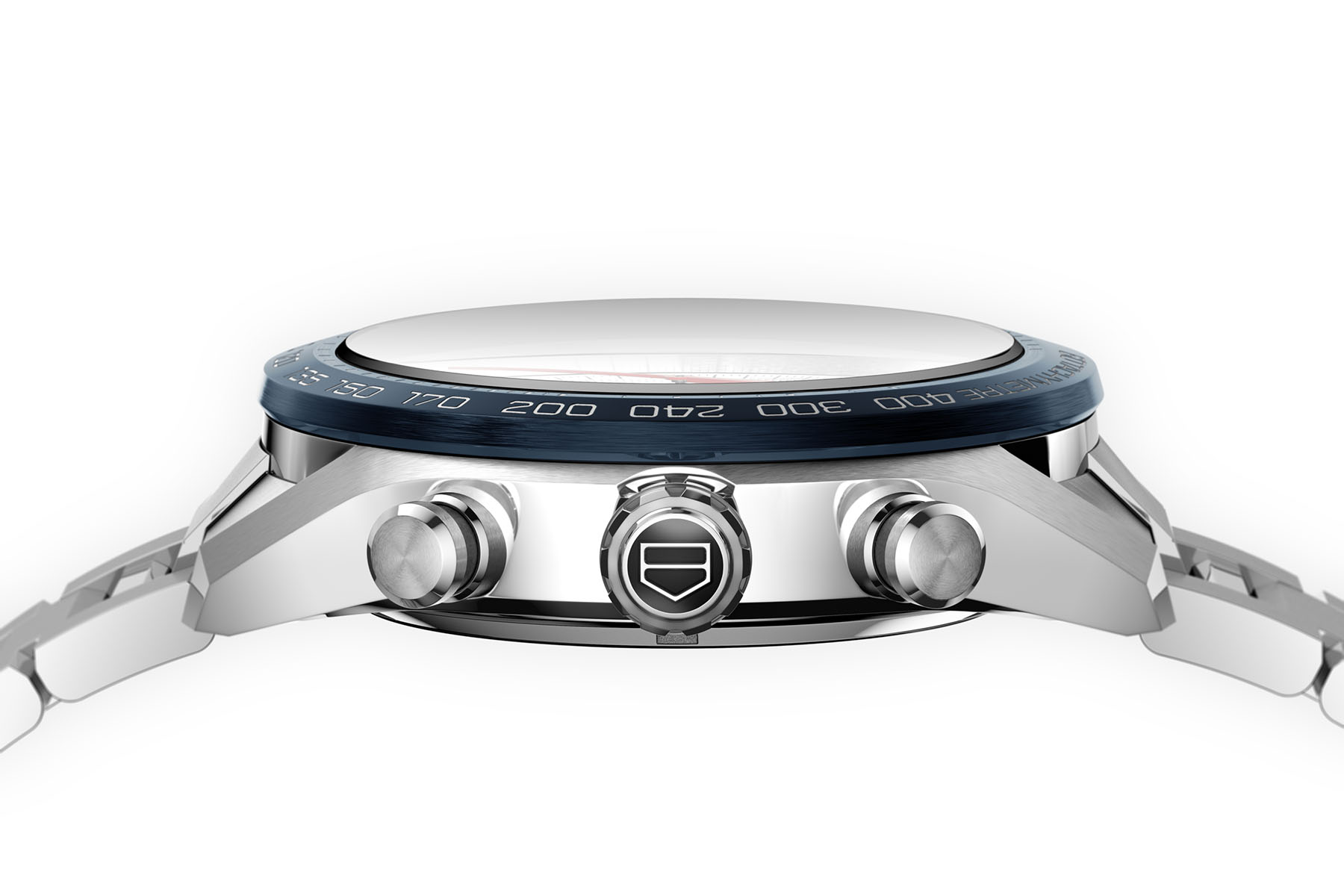 The facts and figures

With the date placement and the color configurations, we also have discussed the main differences compared to the regular Carrera Sport Chronograph. These two limited editions feature the same 44mm stainless steel case that utilizes a combination of polished and finely brushed finishes. As Rob mentioned in his review, thanks to its short lugs, the Carrera Sports Chronograph is very wearable despite its significant size. Both watches come on the same steel H-shaped bracelet as the regular version that features a  folding clasp secured by double safety push-buttons.

The case and the movement feature details pointing out the watch’s limited edition status.

Both versions sport applied rhodium-plated indexes and the rhodium-plated hour and minute hands. The hands are coated with white Super-LumiNova. The watch has a domed and beveled sapphire crystal with an anti-reflective coating on the front. The screw-down case back also features a sapphire crystal through which you can see the Calibre Heuer 02 manufacture movement. 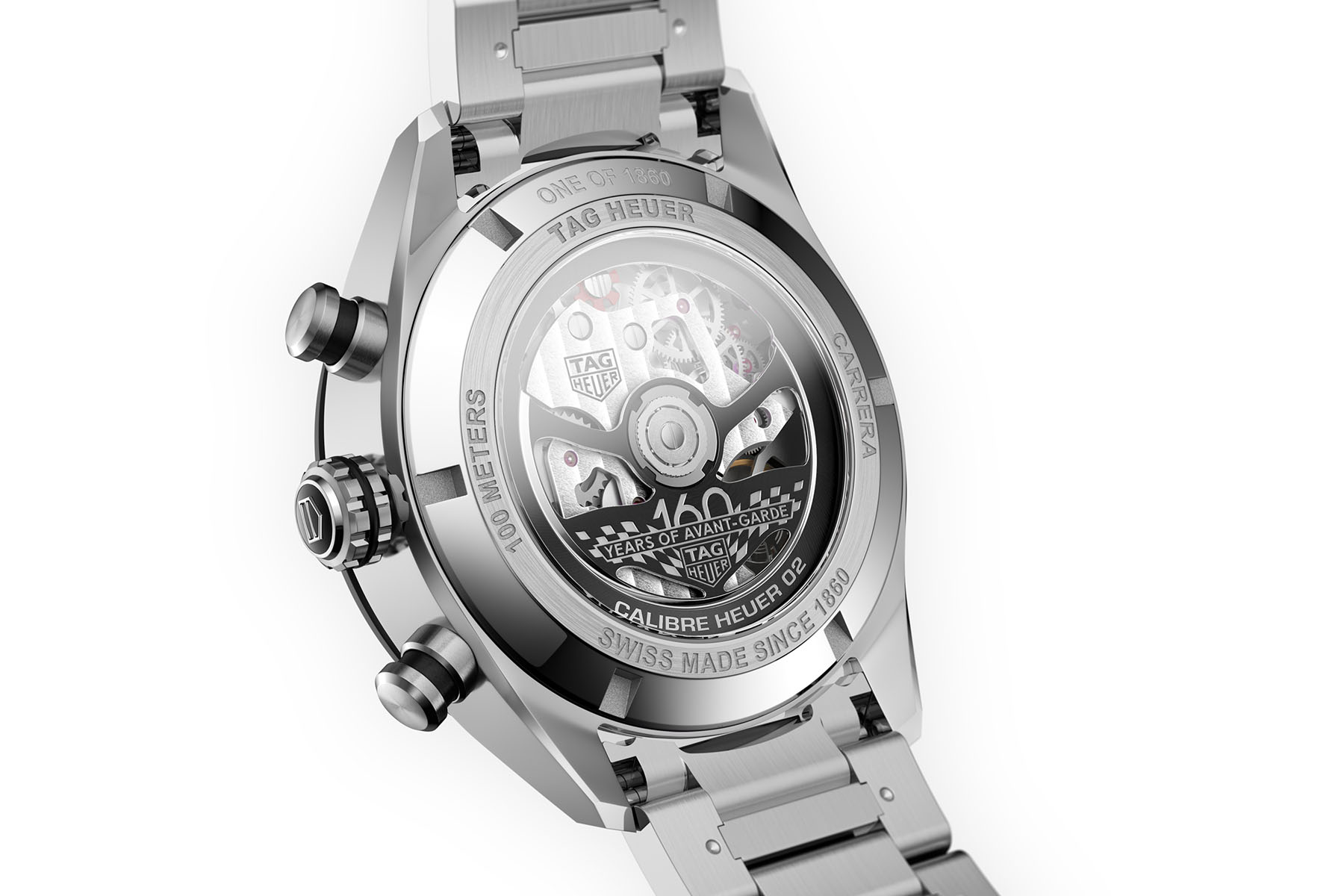 Both the case and the movement detailing point out the watch’s limited edition status. The case back features the words “one of 1860,” referring to the 1,860 watches that will be produced. Next to that, the movement features a specially developed 160th-anniversary oscillating mass. Finally, both watches will be delivered in a specially designed 160th-anniversary box. 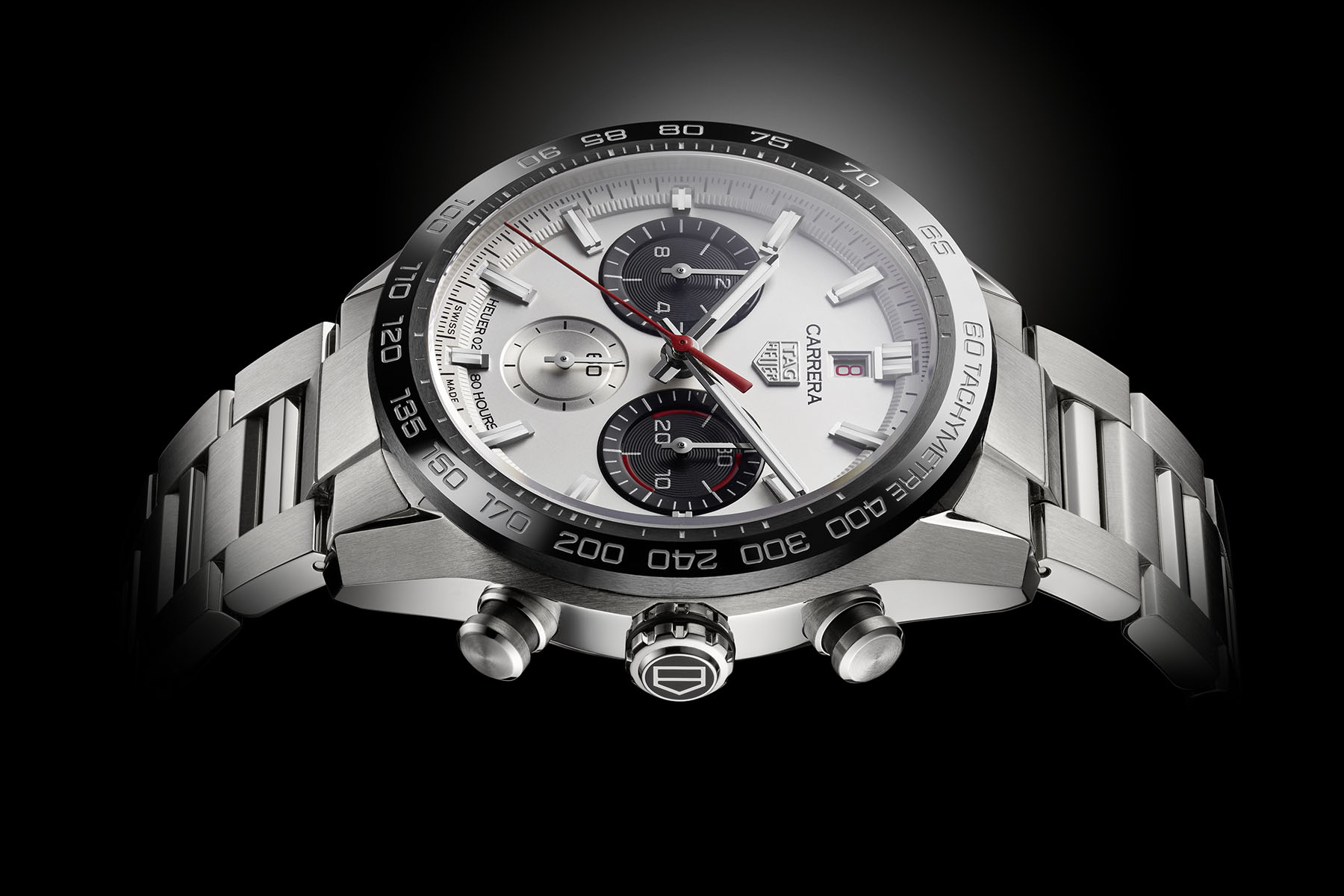 With the specially developed rotor, the movement gets some extra visual attraction.

The self-winding chronograph movement comprises 168 parts, including a column wheel and vertical clutch. The movement beats at 28,800vph and boasts an impressive power reserve of 80 hours. With the specially developed rotor, the movement gets some extra visual attraction compared to the regular version. 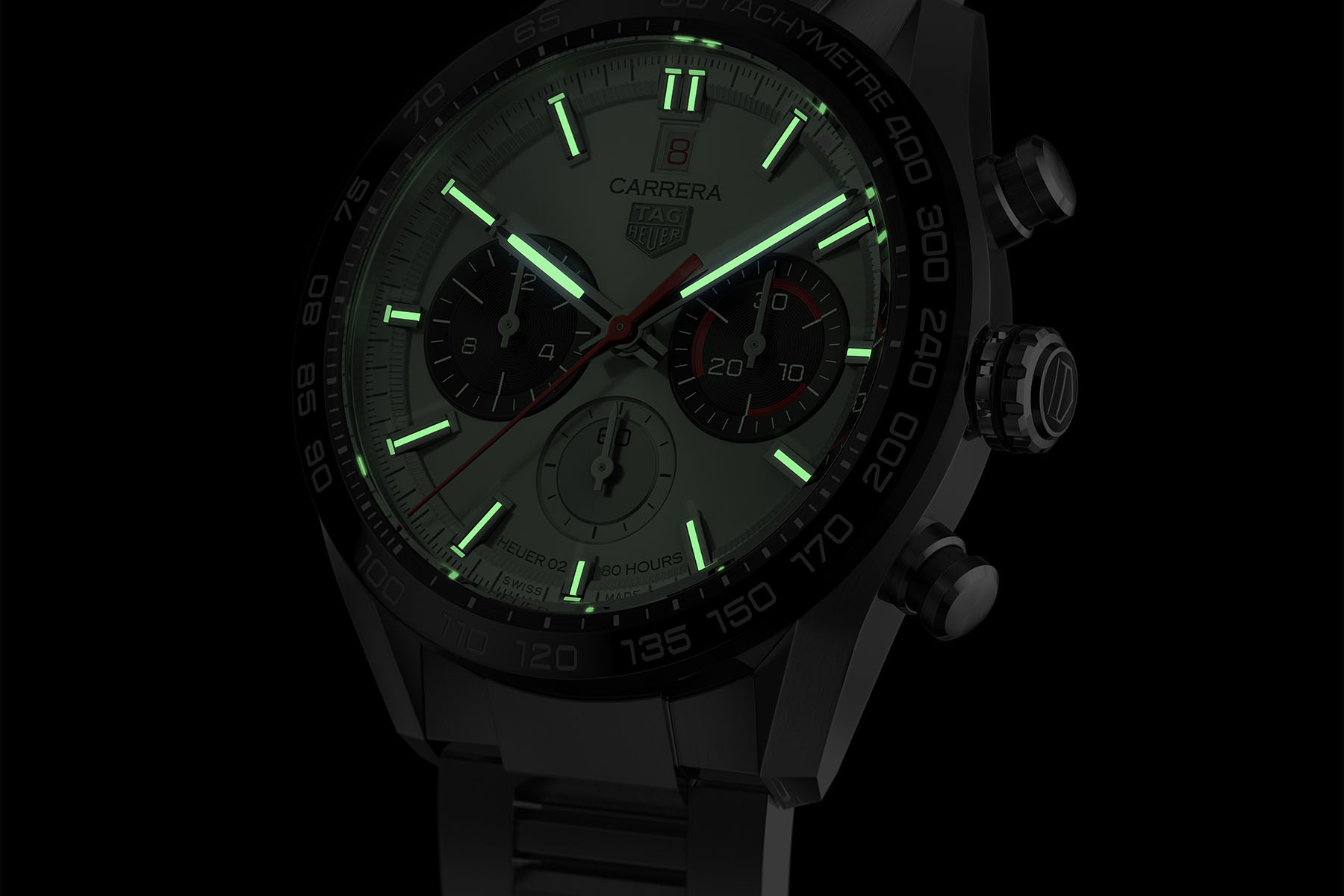 I think the black and white version shows a familiar and potentially popular aesthetic. I would not be surprised if TAG Heuer decides to introduce a regular version with the same color configuration in the future. The blue and white version is a nice tribute to the iconic TAG Heuer colors from the past. I’m sure that both will find their way to buyers quickly. 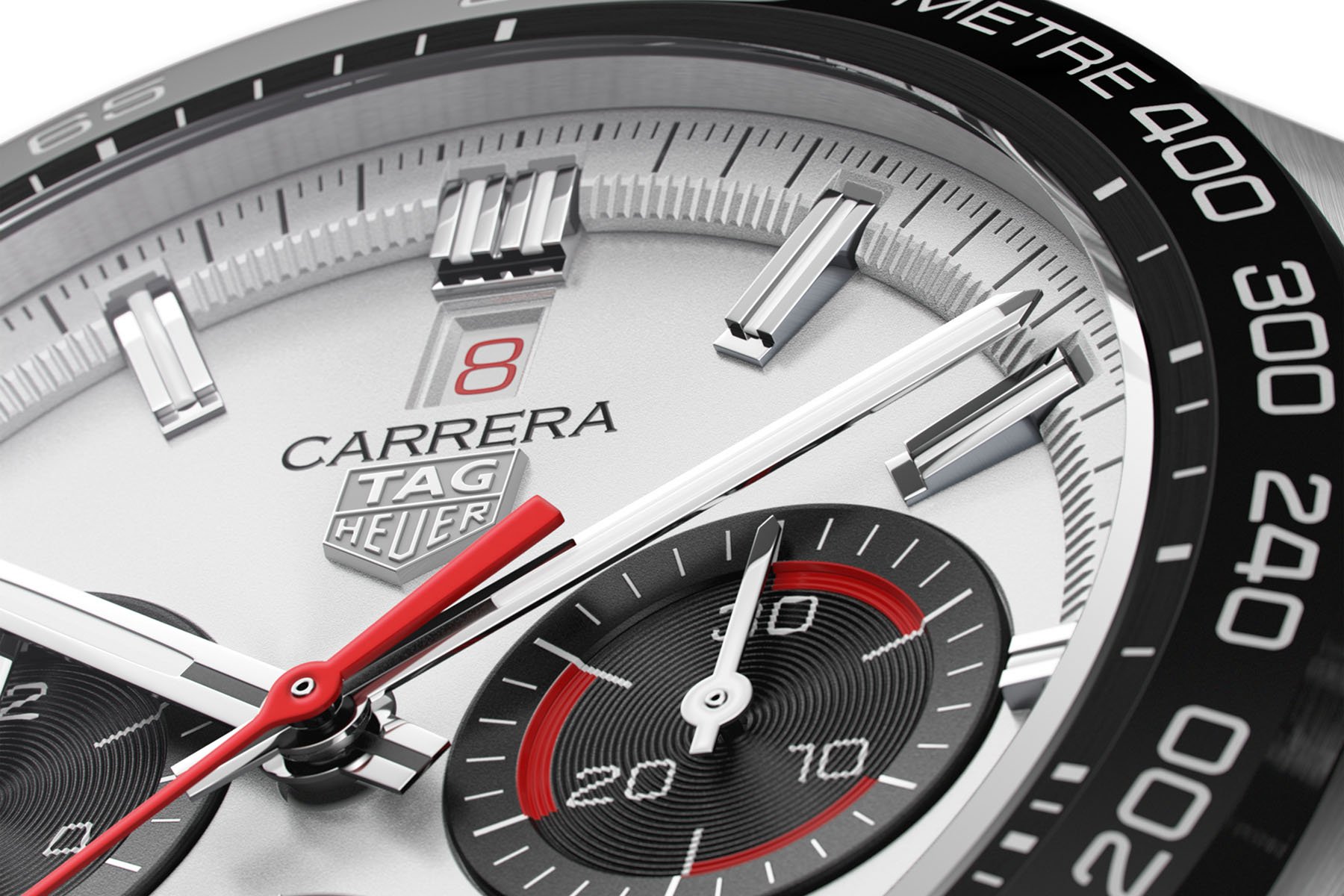 Having said that, the element that will probably be more divisive is the placement of the date window. I love that TAG Heuer had the guts to base these watches on a remarkable icon from the past. But can you place a date at 12 o’clock and sell 1,860 pieces of each watch? With the rich tradition TAG Heuer has, I’m sure there are plenty of enthusiasts that will want one. But the impracticality of the date placement is what sticks with these two new releases. I hope we can witness the watches in the metal soon to find out what the impact is.

Both watches will be available from November 2020 and are priced at €5,600. Both are 150 Euros more expensive than the regular steel models. If you want something out of the ordinary from TAG Heuer, these 160 Years Special Editions are a perfect choice. To find out more, visit the official TAG Heuer website here.