Including a new direction for the Monaco
Ben Hodges
comments ...
Share

This year, 2019, commemorates the 50th anniversary of the end of the 1960’s. I don’t mean that just numerically. The year, 1969 really marked the end of an era. The “free love” movement culminated with the Woodstock ’69 festival and the great human achievement of the USA landing men on the moon brought about a new era of scientific discovery.

Designs of the times were certainly inspired by the whirlwind of events including the retro-futuristic Heuer Monaco. Introduced to sit between the Heuer Autavia and Carrera, the Monaco takes its name from the jewel in the crown of the Formula One calendar that is the Monaco Grand Prix. Racing on the streets of Monte Carlo requires precision and focus but the surrounding circus is glamourous and exclusive. This reflects in the Heuer Monaco’s design being an unusual square shape with high contrast and legible chronograph subdials. Fit for those in the pitlane as well as those watching from the superyachts. 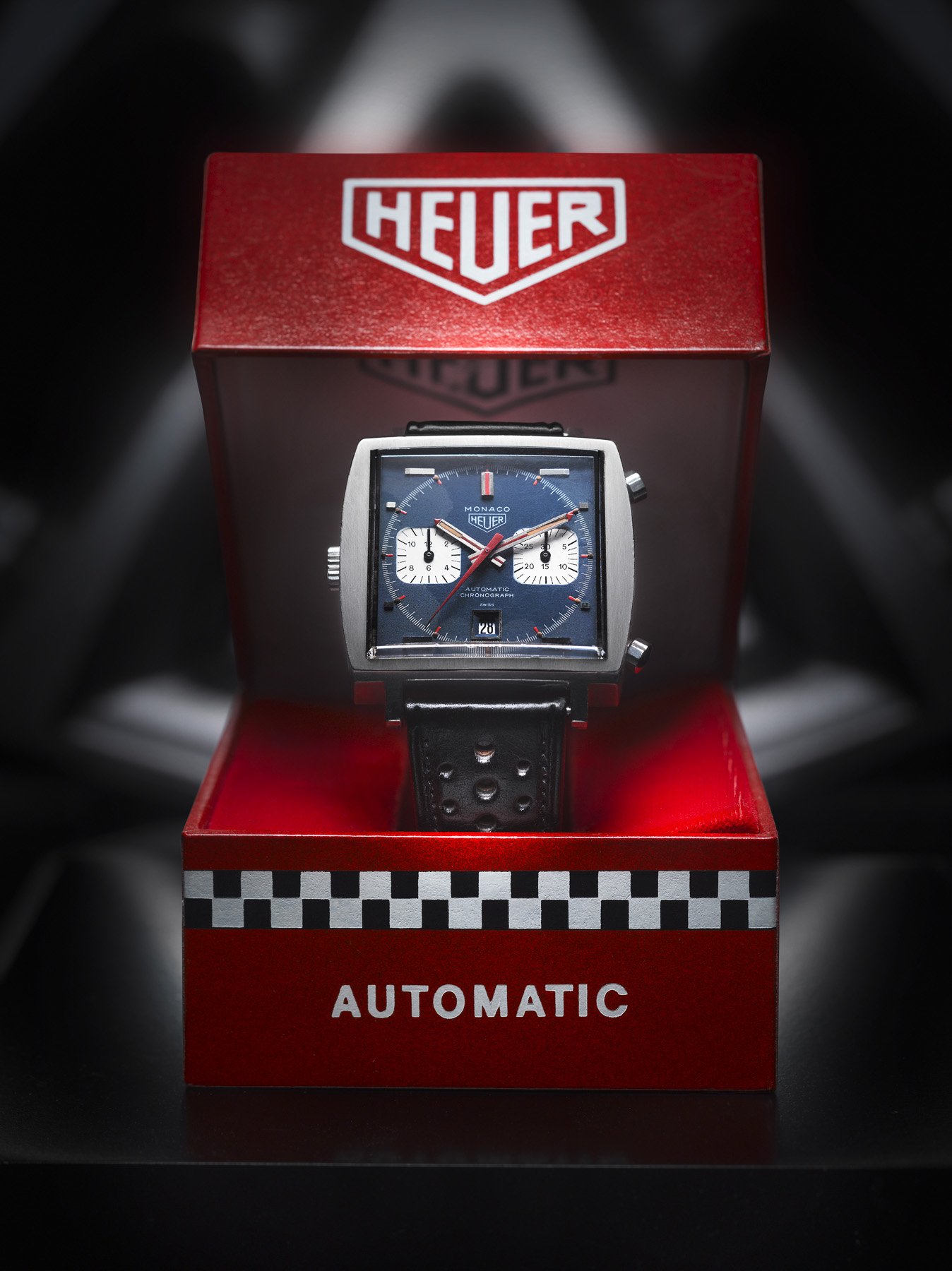 The Monaco suited those in the pitlane as well as those watching the race from their superyachts. 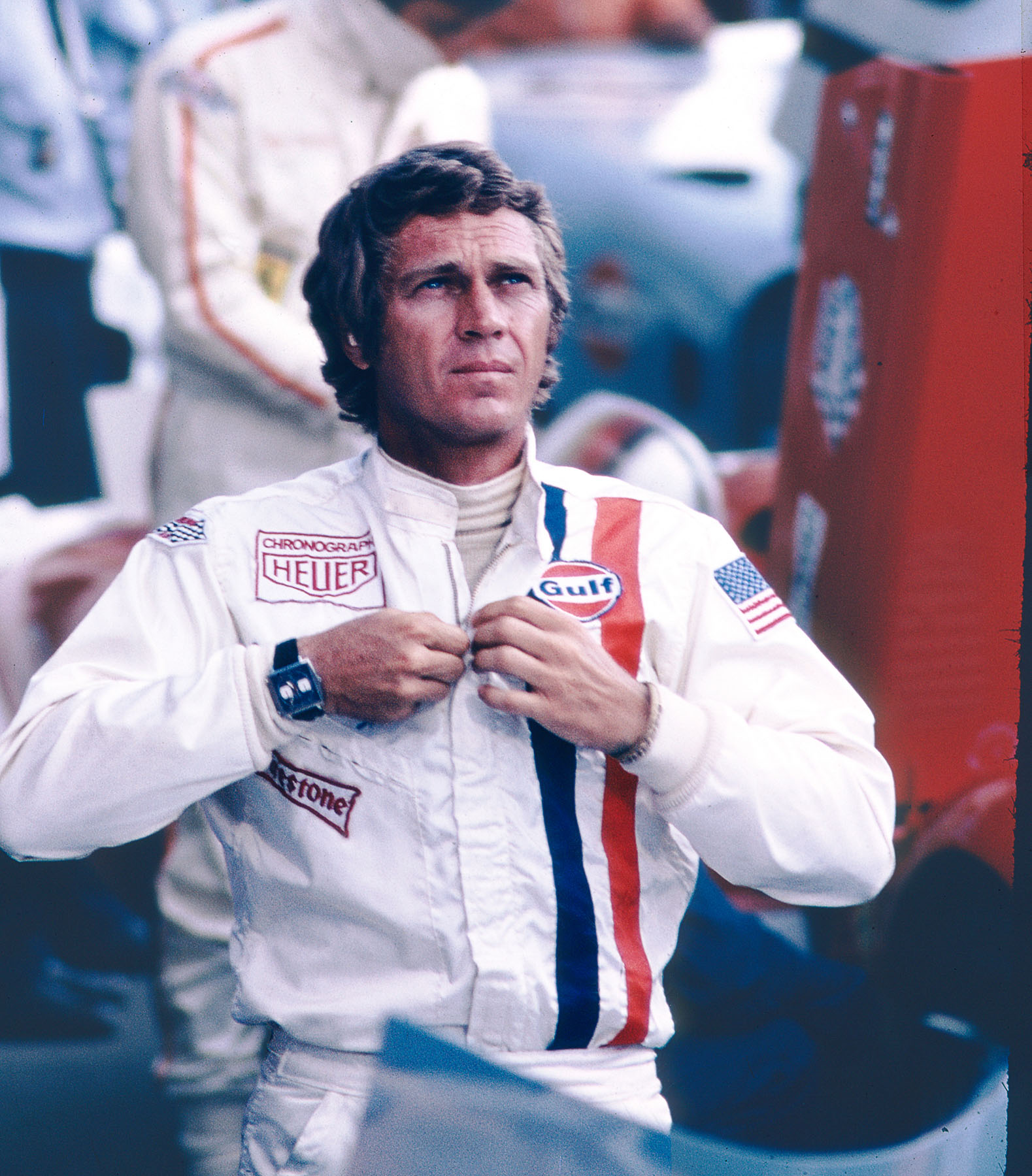 The peculiar thing is, the Heuer Monaco is most renowned for being strapped to the wrist of Steve McQueen in the cult movie Le Mans (1971). The Circuit de la Sarthe in Le Mans is the home of endurance racing, which the movie depicts with great accuracy. Mostly due to the racing scenes being filmed during the actual 1970 running of the Le Mans race. Steve McQueen assumed the role of the driver of the Gulf liveried Porsche 917. In fact, the winning vehicle was driven by Richard ‘Dickie’ Attwood and Hans Herrmann ‘the German’ in a red and white striped Porsche 917.

5 Decades of the Heuer Monaco 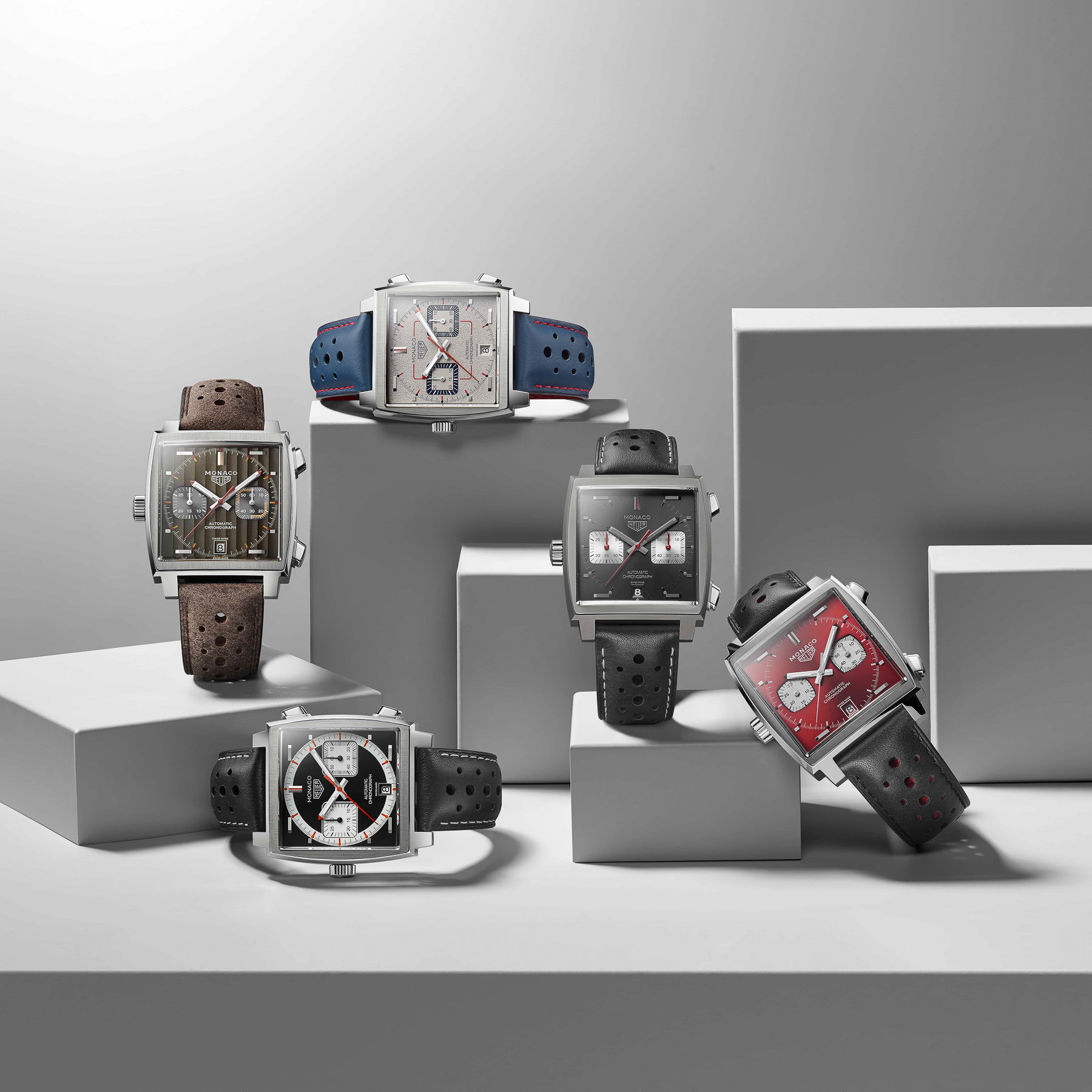 Historical accuracy aside, the Monaco became an icon when TAG Heuer began splashing the famous image of Steve McQueen zipping up his race suit with the Monaco on his wrist in their 1998 advertisements. With the Monaco in full view, a new generation made the watch synonymous with the ‘King of Cool’ himself when they re-introduced the Monaco after a 23-year hiatus. This year, TAG Heuer have paid tribute to the Monaco’s legacy with aplomb. 5 limited edition Monacos have been sprinkled throughout 2019 each representing the decades leading up to this year with varying results. As Michael Stockton pointed out (click here), the most succinct design was the blue, red and grey model evoking the 90’s. Which is interesting as mentioned before, the Monaco took a break during this decade.

The limited edition run of 169-pieces for each of the 5 decades are bookmarked with an original museum example of a 1969 Heuer Monaco. The unique Piece d’Art is a modified Monaco 1133B adding a psychedelic plaque engraving on the Calibre 11 movement bridge, which is now visible through the retro-fitted sapphire crystal caseback. The package includes the original 1969 leaflets in an engraved wooden box. This one-off model will be auctioned on 10th December 2019 in aid of the charity, United Way of New York City and is a rare opportunity to own something straight from the TAG Heuer museum.

Swan Song for the Calibre 11 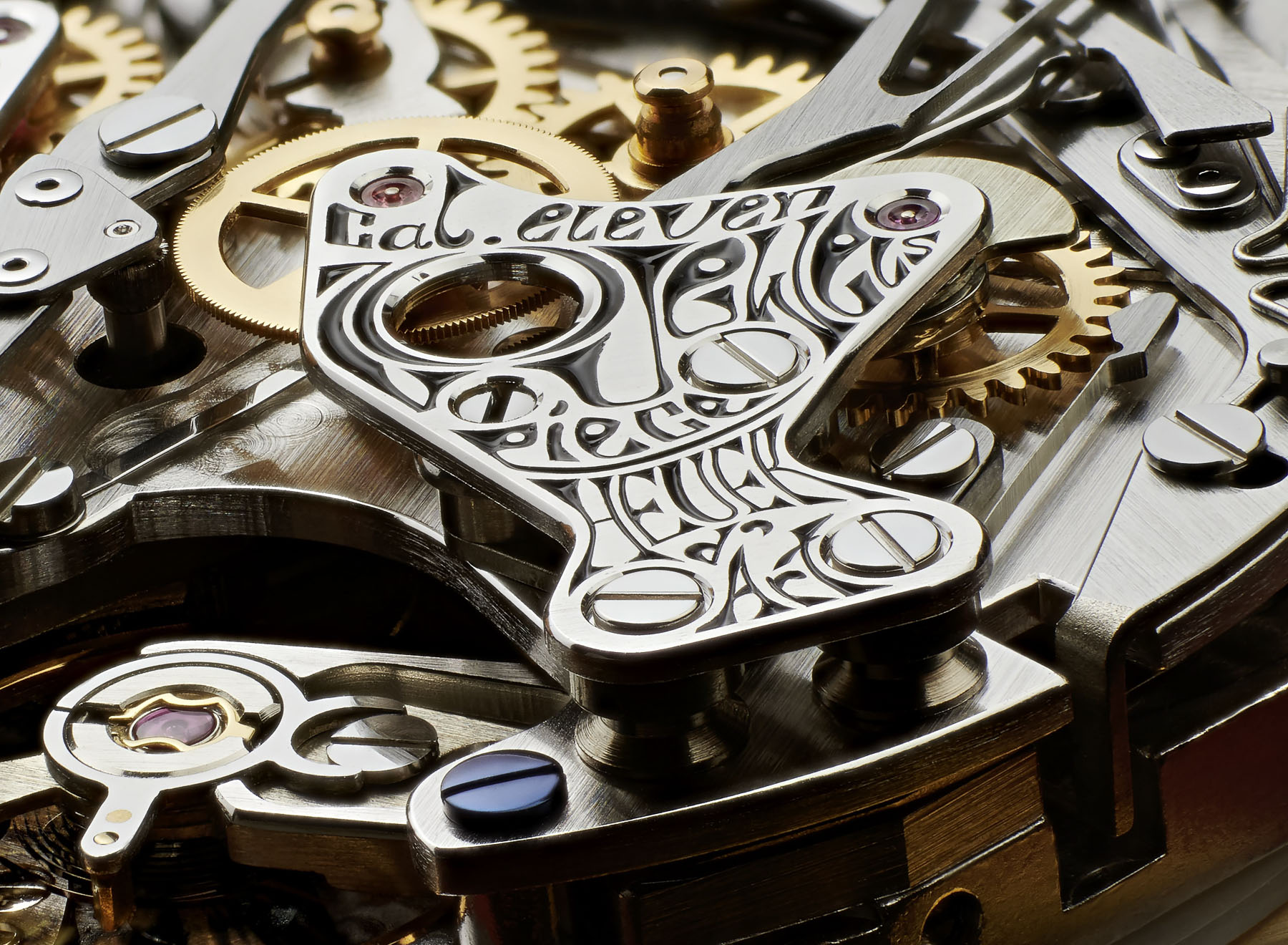 Enjoy the iconic Monaco silhouette of the left-side crown and two-pushers on the right-side while it lasts. TAG Heuer are not only putting the full stop on the Monaco 50th Anniversary, but also the Calibre 11 that powers it. Since the beginning, the Monaco has been powered by one of the first automatic chronograph movements in production. The Calibre 11 name has remained but the movement architecture has changed over the years. From 2020, the in-house Calibre Heuer 02 will take its place and keep the winding crown on the right-hand side alongside the pushers. From a usability perspective, I understand this choice, but personally wish the southpaw crown remained for nostalgia’s sake. 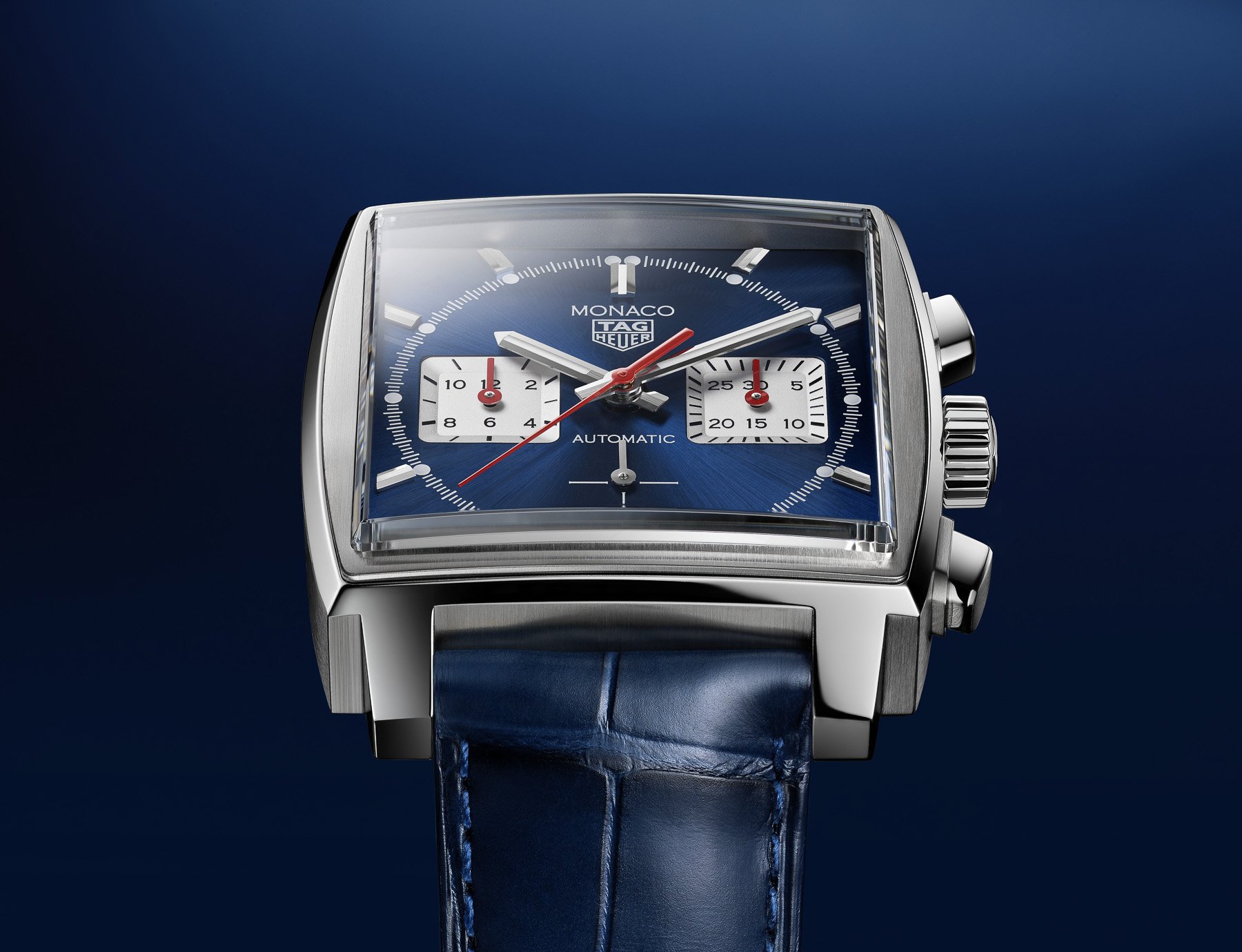 The new Monaco Calibre Heuer 02 changes the layout by moving the running seconds to the 6 o’clock position with a crosshairs design and the date window just below. The new look Monaco is launching in a stainless steel case and classic petroleum blue dial evoking the original’s design with modern underpinnings and 80-hours of power reserve.