Before sitting down to write this piece, I wasn’t too familiar with Louis Moinet and the brand’s watches. In retrospect, I feel that this is a bit of a travesty as some research into the brand’s eponymous namesake revealed some exciting information. OK, so you want some significant, heavy-hitting facts? How about Louis Moinet was a personal advisor to a certain Mr. Abraham-Louis Breguet for 12 years before his death? Yes, that Mr. Breguet.

You still want more? Let’s take the humble chronograph. Loved and adored by many here in the Fratello Watches community. Well, Louis Moinet was the inventor of the chronograph complication in 1816. Although he called it a “compteur de tierces” which translates roughly to “third-party counter. I hope that I have your attention now!

Fast forward to the modern-day, and unfortunately, Louis Moinet himself is no longer with us. Still, his work and his spirit live on in his eponymous brand. Every Louis Moinet watch is crafted as part of an exclusive limited edition set or is made to be entirely unique. So, with a newfound interest in the work of Louis Moinet, I take a look at some of the most remarkable models the brand launched in 2020. As one would expect from a brand named after the advisor to Abraham-Louis Breguet, this is high-end horology. If tourbillons do it for you, then you might want to read on! 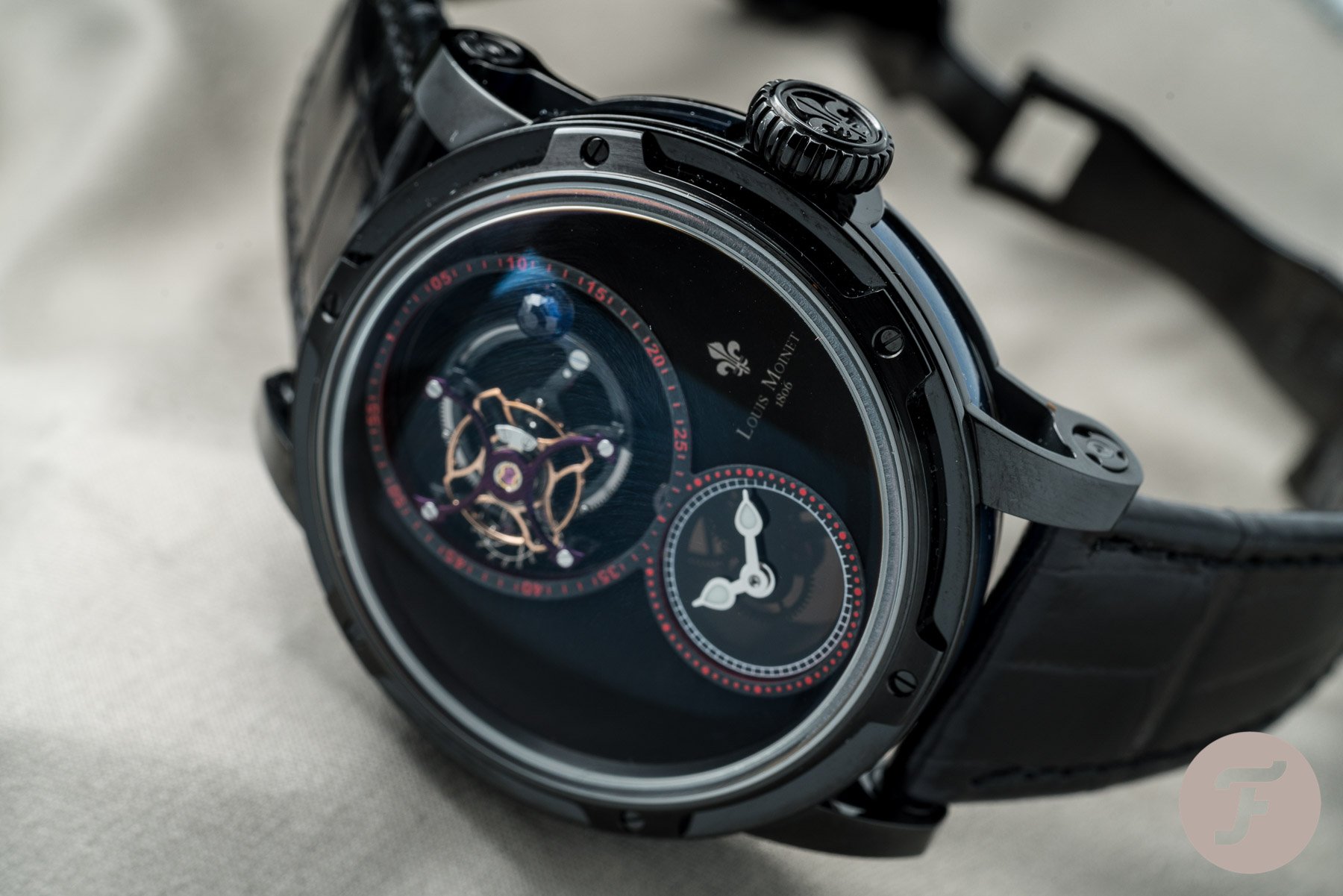 Ad Astra means “to the stars”, and Louis Moinet delivers on the daydream with this piece. A purple titanium Spacecraft and a blue planet bring the concept to life on the dial. An impressive and oversized flying tourbillon at 12 o’clock, measuring 13.59mm in diameter, represents the spacecraft. A stunning sapphire takes the form of the blue planet and measures an extraordinary 3.92mm across, with 16 sides and 208 individual facets, and rotates as a counterpoint to the tourbillon. The impressive tourbillon provides the focal point for the design, and rightly so. 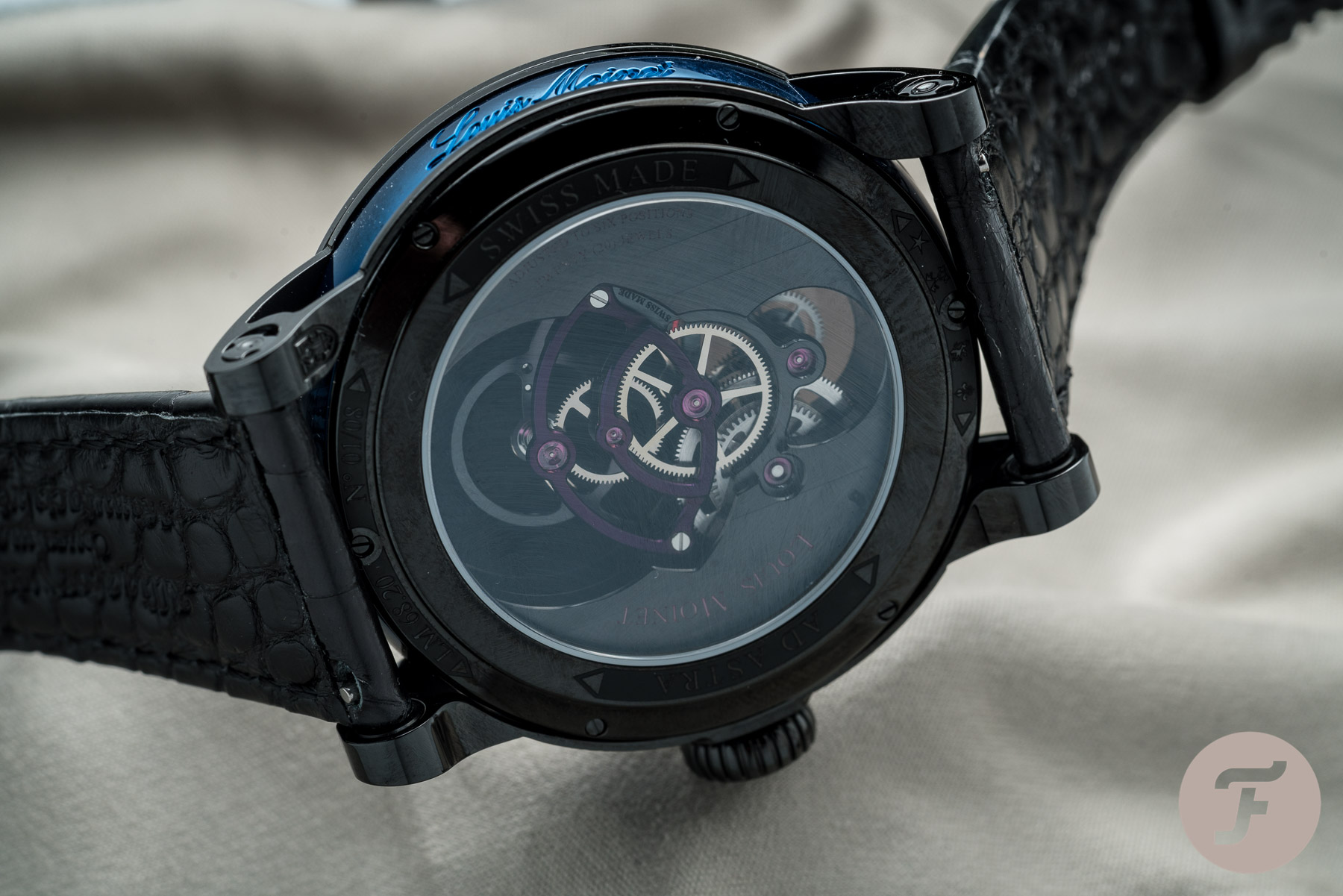 The tourbillon is suspended above an opaque black titanium dial representing the emptiness of deep space, with the time displayed on a small sundial at 6 o’clock. The high-tech case is crafted from a combination of black and “Moinet Blue” titanium. At its heart are two open-worked bridges that surround the movement container, in flamboyant Moinet Blue. The Ad Astra is a limited edition of just eight pieces. 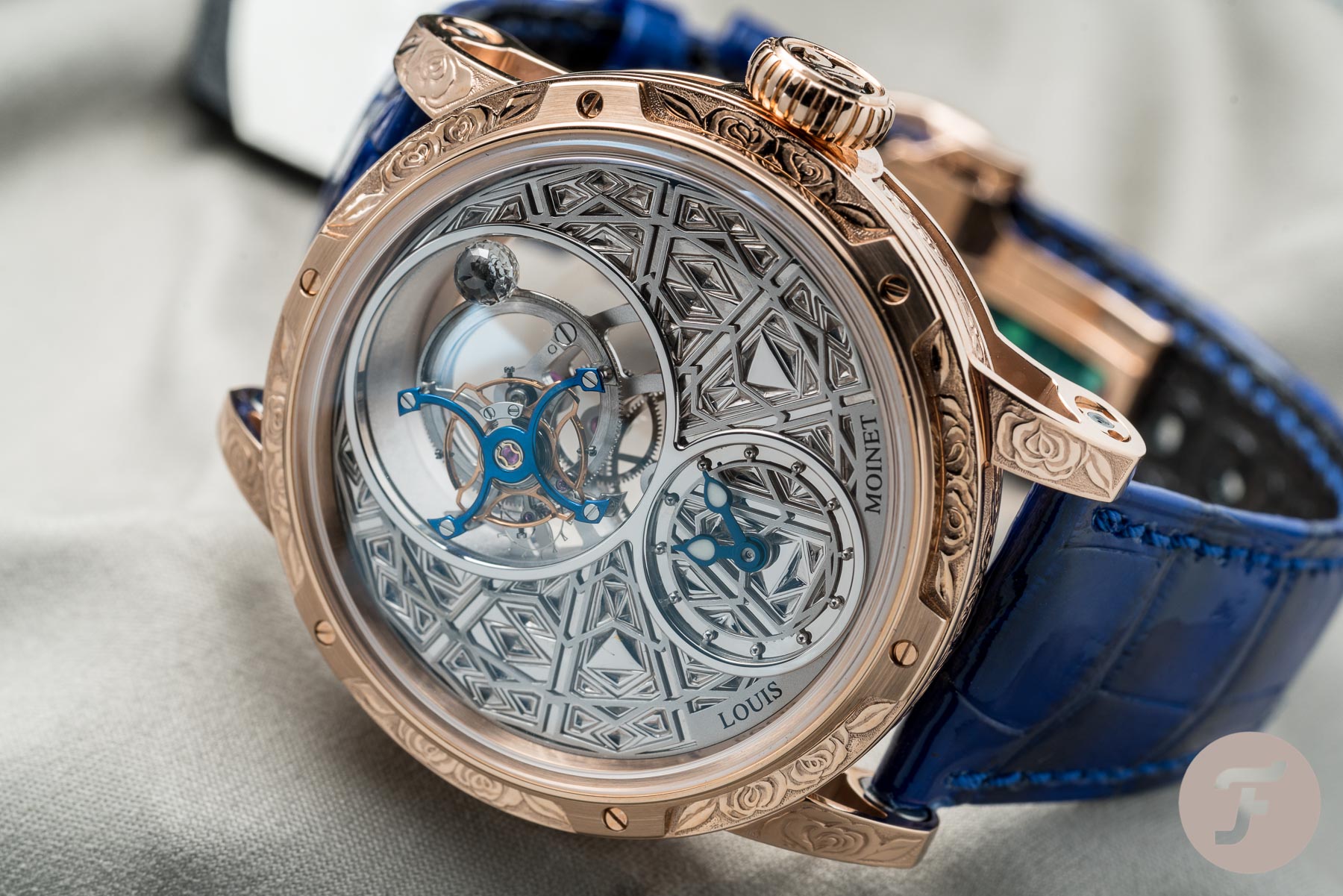 The Infinity from Louis Moinet is a unique piece and follows in the footsteps of the Ad Astra. The layout and design are essentially the same, but with some significant changes in materials. Gone is the dark titanium, and instead, we have a stunning 18kt rose gold case. The case bezel is hand-engraved with colorful portrayals of the life cycle of a rose. It seems an odd juxtaposition baked on the space themes represented with the same layout in the Ad Astra. Still, it highlights Louis Moinet’s creativity and ability to reimagine similar designs across drastically different concepts. 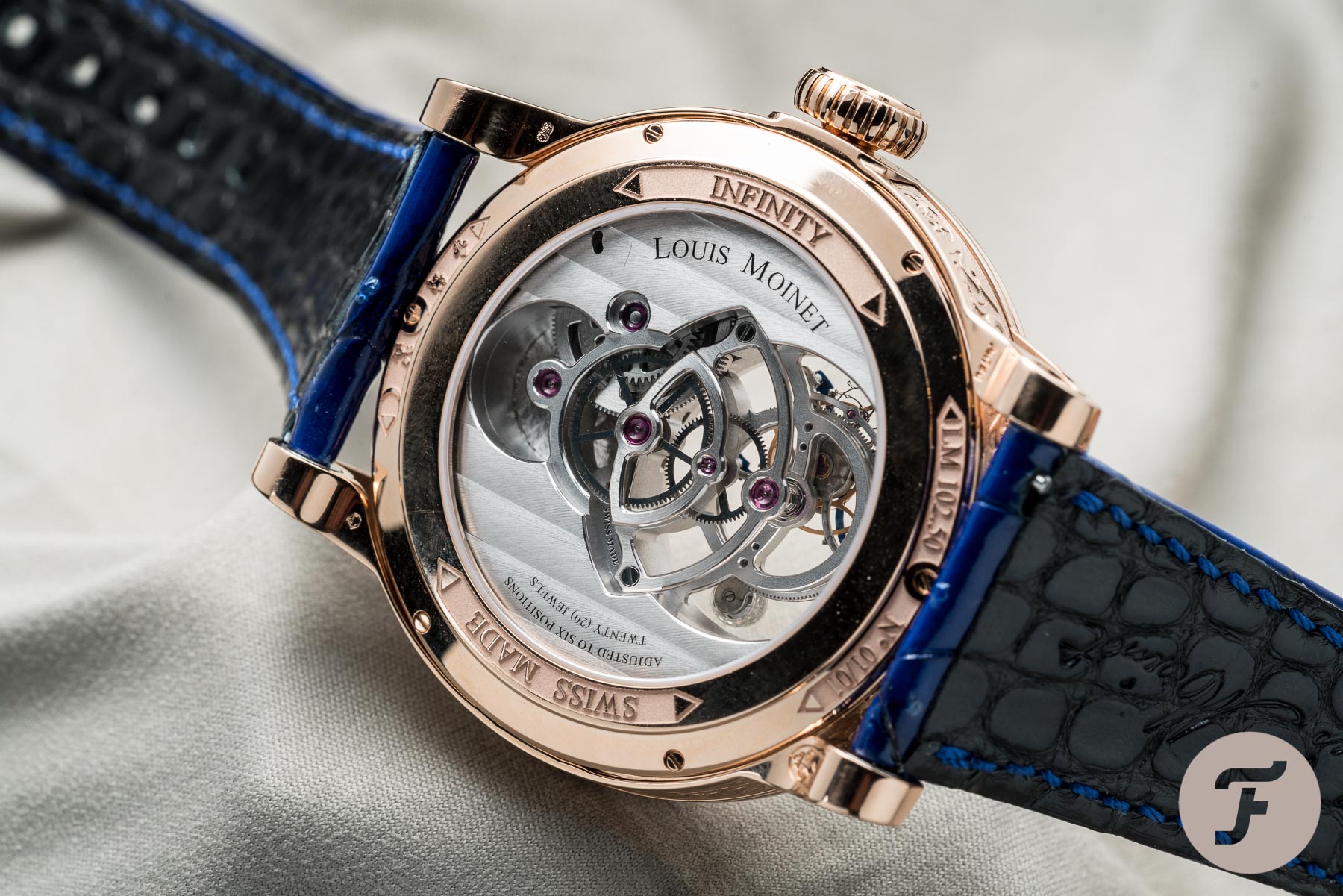 The oversized flying tourbillon at 12 o’clock rotates with a beautiful diamond counterpoint.  The subtly raised areas distinguish the bas-relief engraving on the dial. This enables the decorative elements to confer a distinctive depth effect. The dial is engraved on two levels: the lower part depicts a geometrical representation of infinity with its number 8, complemented by an upper section giving life to eternity. 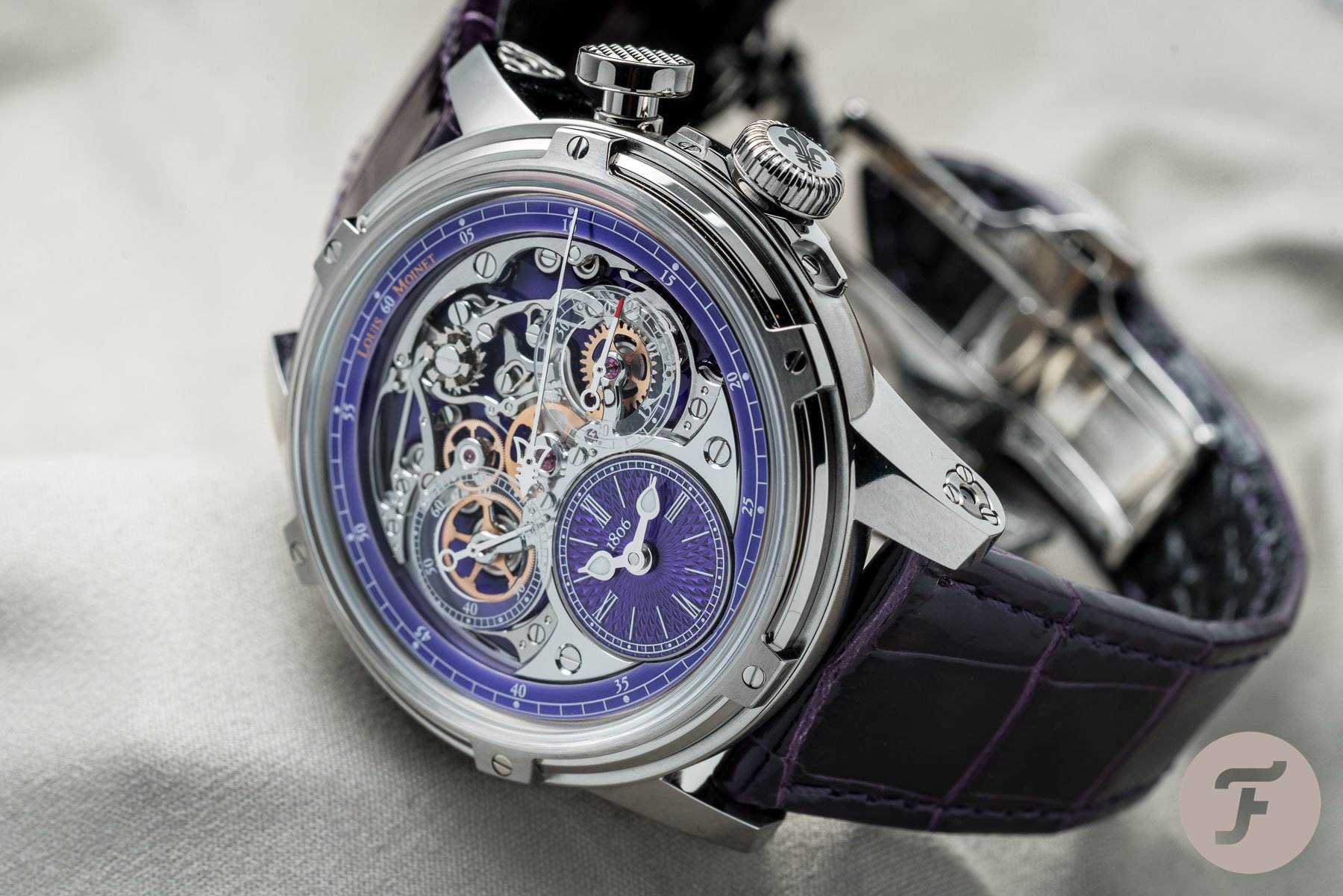 The Memoris Superlight from Louis Moinet is probably my pick of the bunch here today. While I appreciate a tourbillon as much as the next enthusiast, I think I prefer a tasteful skeleton execution more, and that is precisely where the Memoris Superlight delivers. In my opinion, skeleton watches are notoriously hard to do without looking crass. The Memoris is really quite fabulous, though. The case is a 46mm Grade-5 titanium beast with a silky smooth satin finish. My favorite feature is the oversized pump-style mono-pusher at 2 o’clock — it really looks the part. 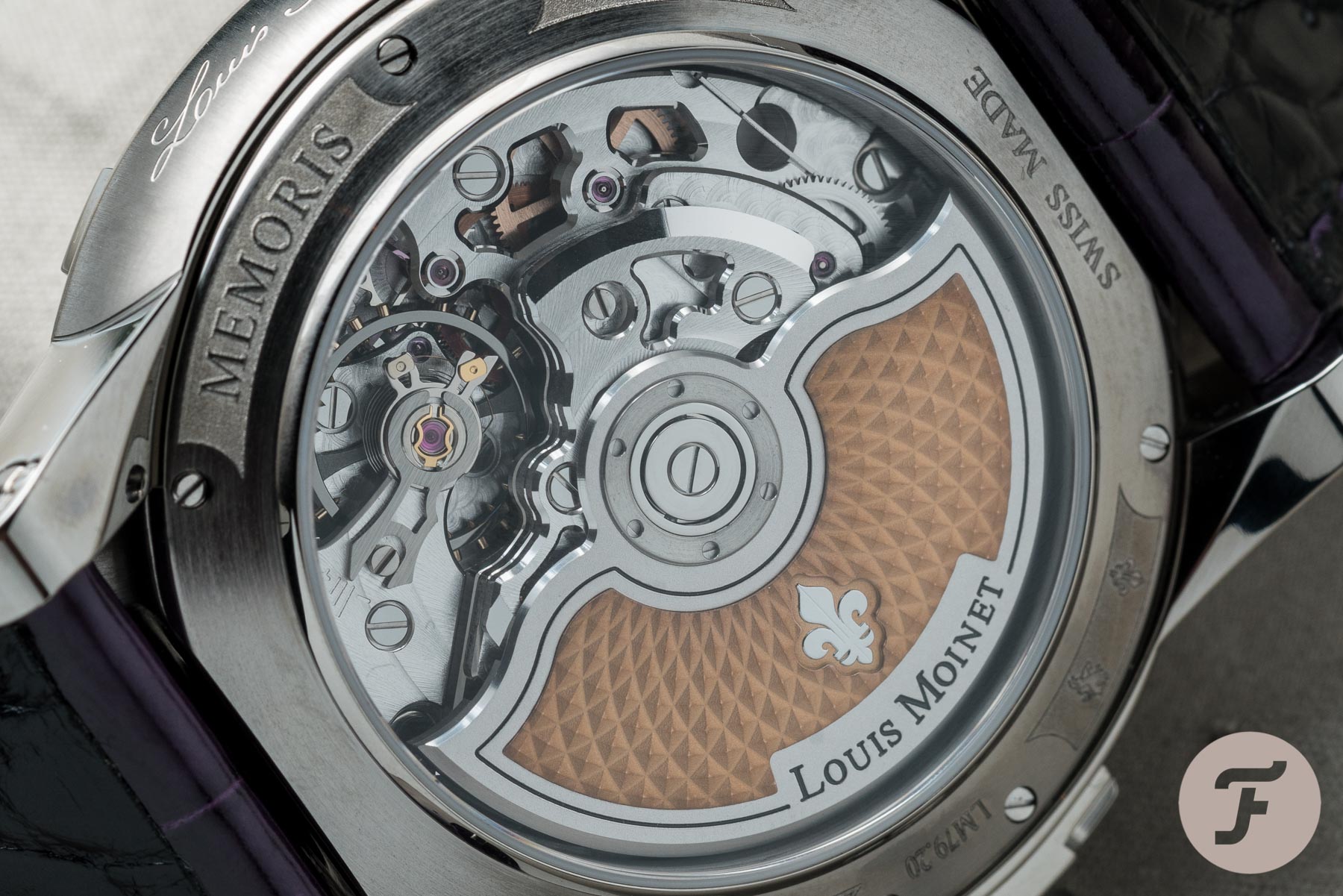 The eye-catching cutaway dial reveals a stunning metallic purple mainplate underneath. Movement specialist, Concepto,  helped conceive the movement design “splitting” the movement into two distinct sides. The chronograph’s architecture is fully exposed on the dial side, with the column wheel forming a focal point at 12 o’clock. The automatic mechanism and the regulating assembly of balance and escapement are visible on the rear of the watch, behind an 18 karat gold oscillating weight decorated with deeply engraved guilloche. Simply stunning and limited to 28 pieces. 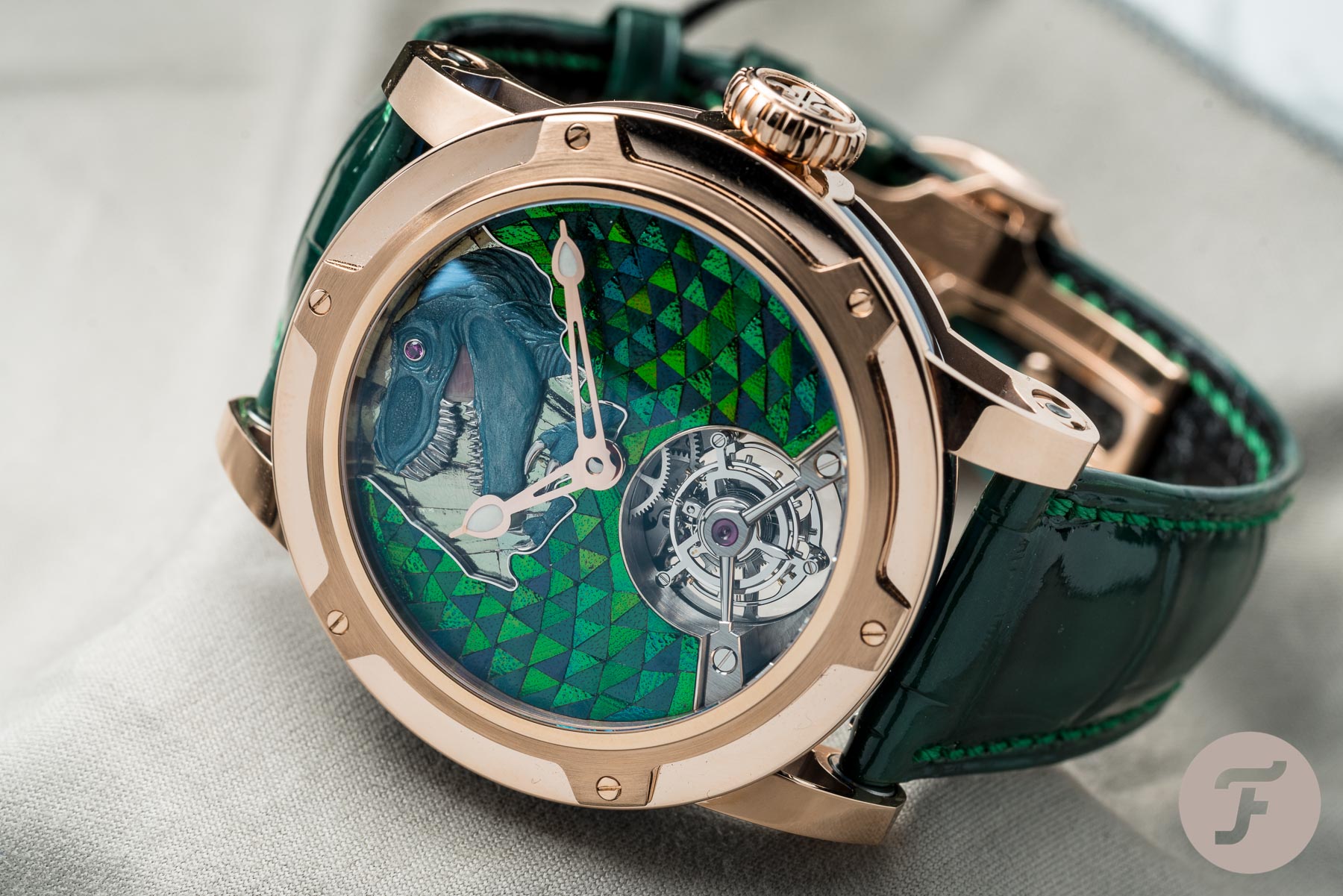 The Mogador T-Rex Tourbillon is a pretty special piece. Whether or not you like the design, the inclusion of an authentic piece of fossilized T-Rex tooth, believed to date back 65 million years, is pretty damn cool in my book. You can see the fossilized tooth in the dinosaur’s mouth, forming the tongue if you look closely. The dinosaur’s head is entirely engraved and colored by hand. At the same time, the green jungle effect consists of “scarab beetle elytra” marquetry. Depending on the angle from which you look at the watch, the colors change from green to blue. This is a real artwork watch. 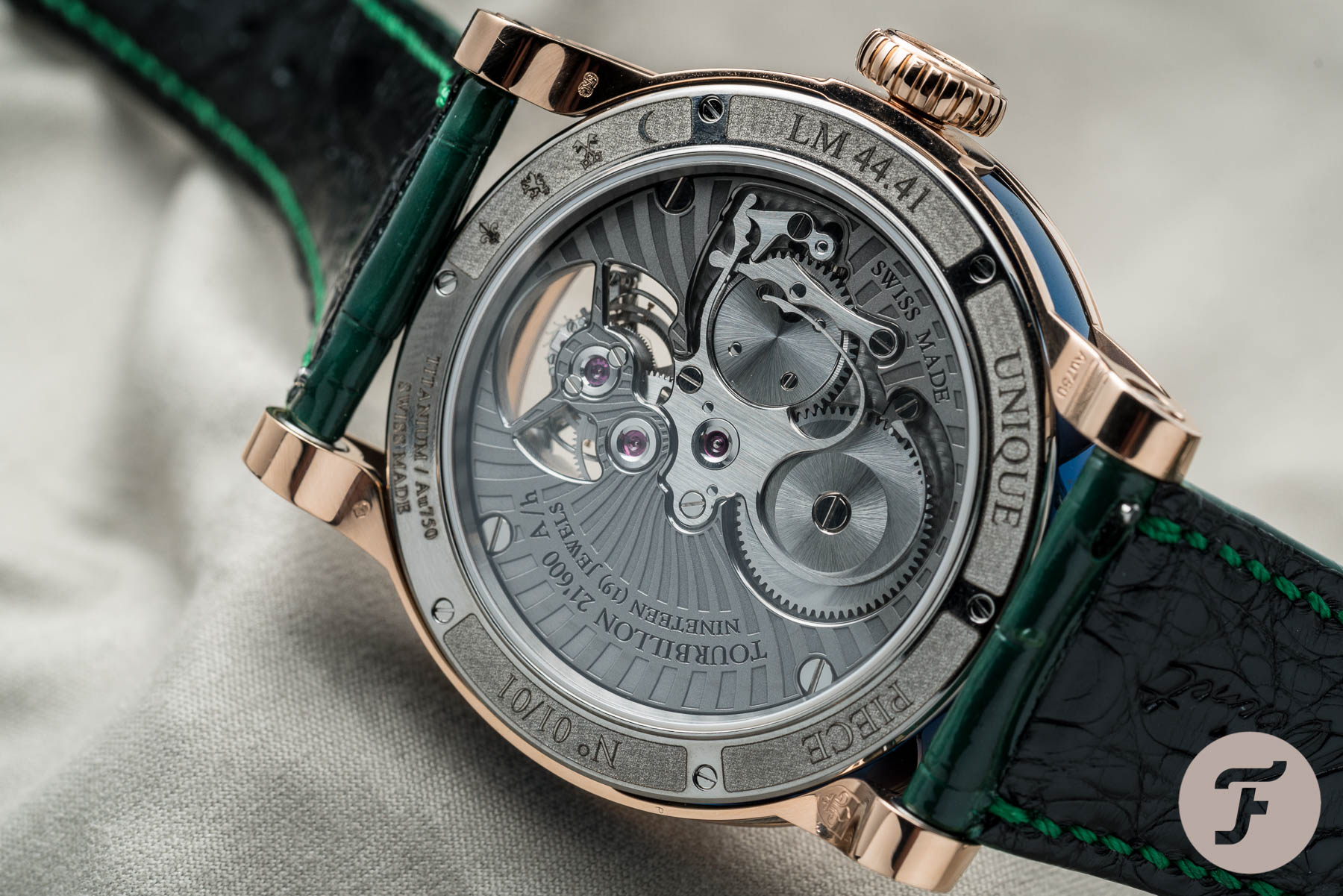 Contrasting the “King of the Tyrant Lizards” at 6 o’clock is a carrousel tourbillon, with a titanium bridge to offer further contrast to the 45.4mm 18kt rose gold case. To be honest, I can’t say that I’d be looking to add this unique piece to my collection any time soon (not that I could afford to…). Still, I really appreciate the craftsmanship in creating this watch. The dinosaur head and the tiled marquetry details are undoubtedly impressive, and the watch offers something different for the discerning collector. 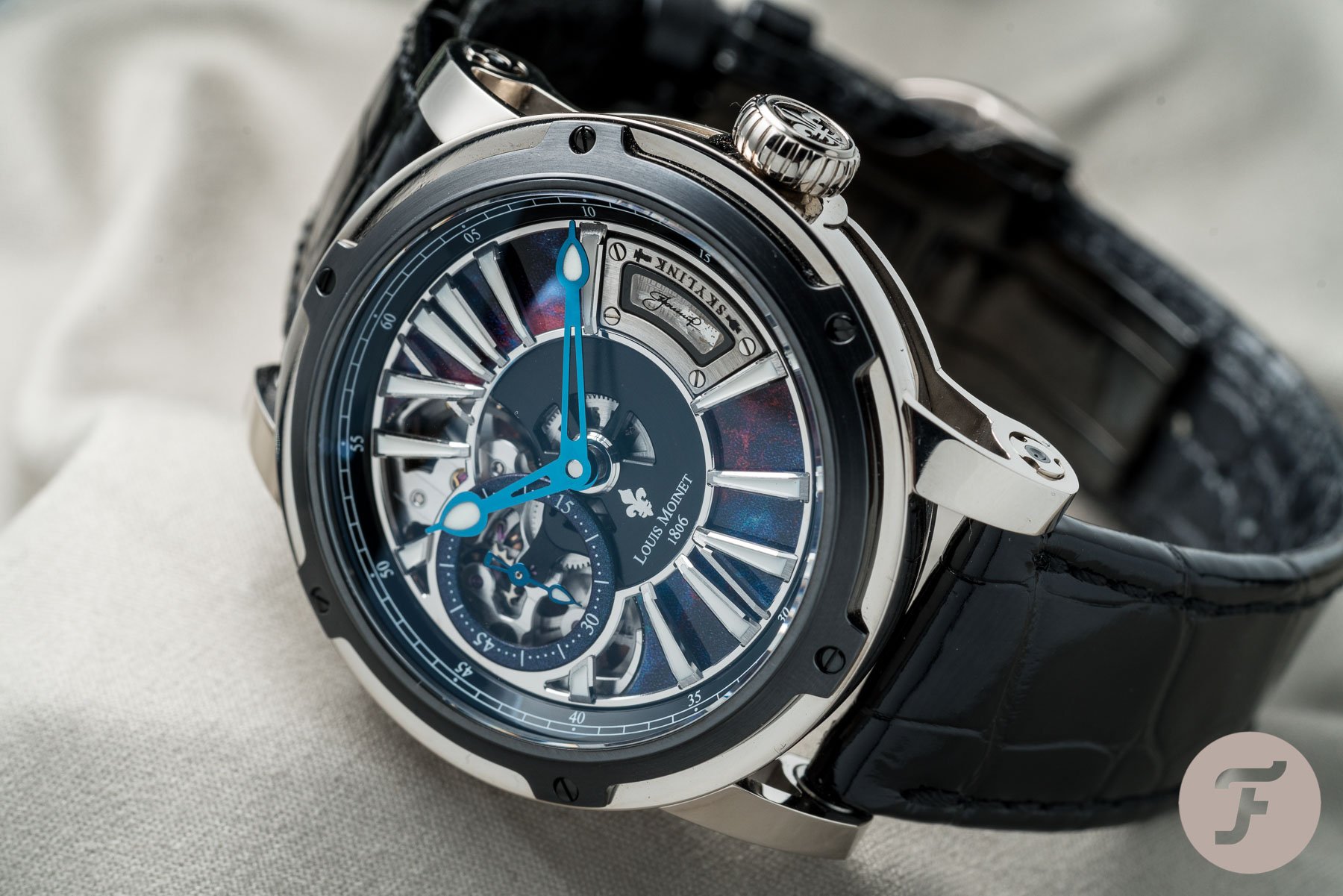 The Skylink is the most reserved of all the watches I’m writing about here today. It is a time-only watch with a small seconds sub-dial at 9 o’clock. Where this watch gets super interesting is the inspiration and reference to said inspiration. It commemorates one of history’s most unusual yet significant meetings, a simple handshake between a Russian and an American. The circumstances in which that handshake took place were far from simple, though, as it occurred on July 17th, 1975, at the height of the Cold War. Far above planet earth in the surreal setting of two spacecraft, docked together in orbit, bringing the two countries together in space for the first time. 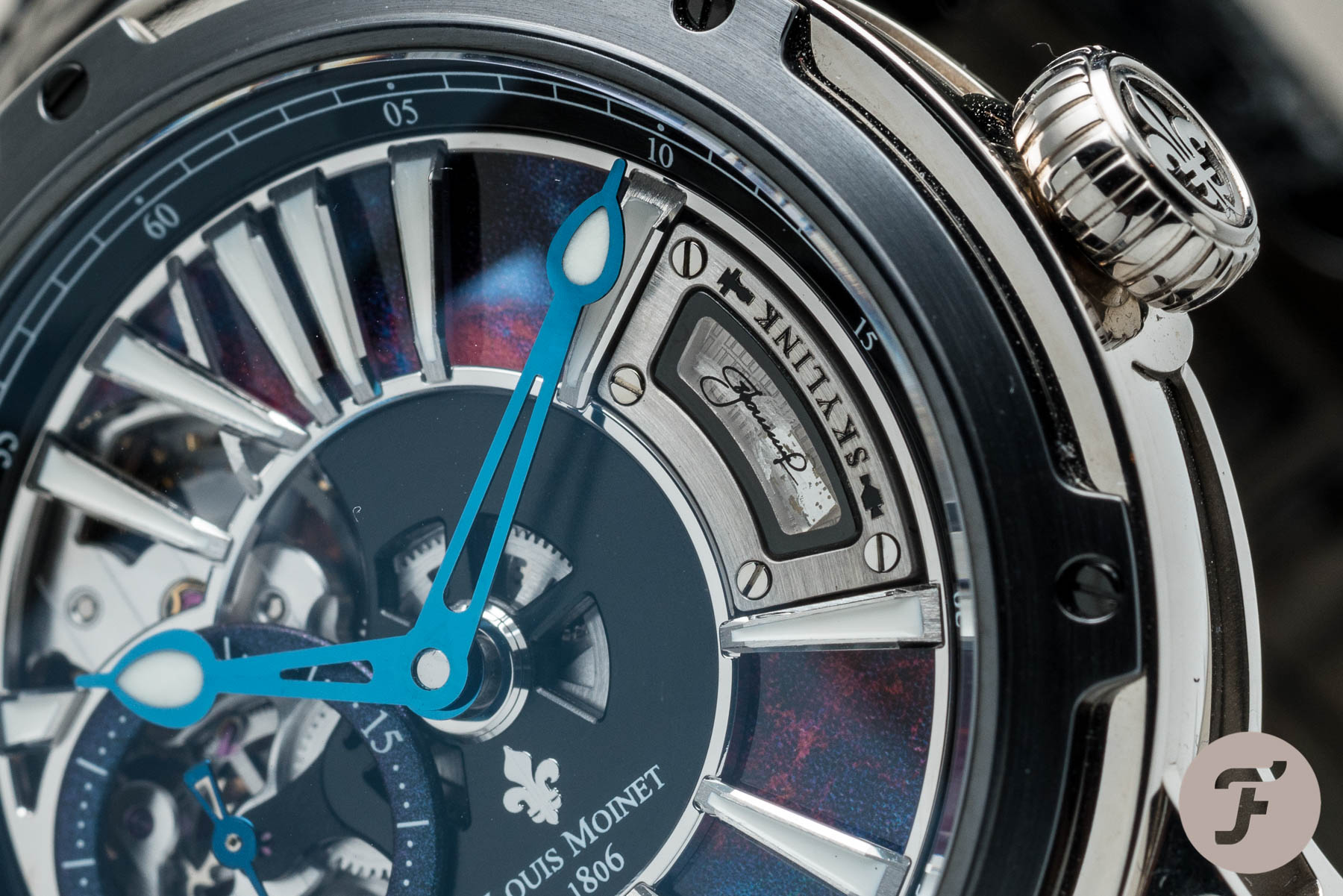 Where things get even more extraordinary, you may have noticed the peculiar tiny glass capsule at the three o’clock position. It contains actual fragments of foil from the Apollo module and the cosmonaut’s spacesuit. How cool is that? Genuine flown material is not exactly easy to come by. As a big space enthusiast, I find it incredibly cool. Further cementing the space theme, the Skylink has a visually striking dial, with its Cosmic blue-red nebula pattern. While the Memoris Superlight is my favorite, the Skylink is a close second! There are only 19 pieces of this 18kt white gold Skylink available. 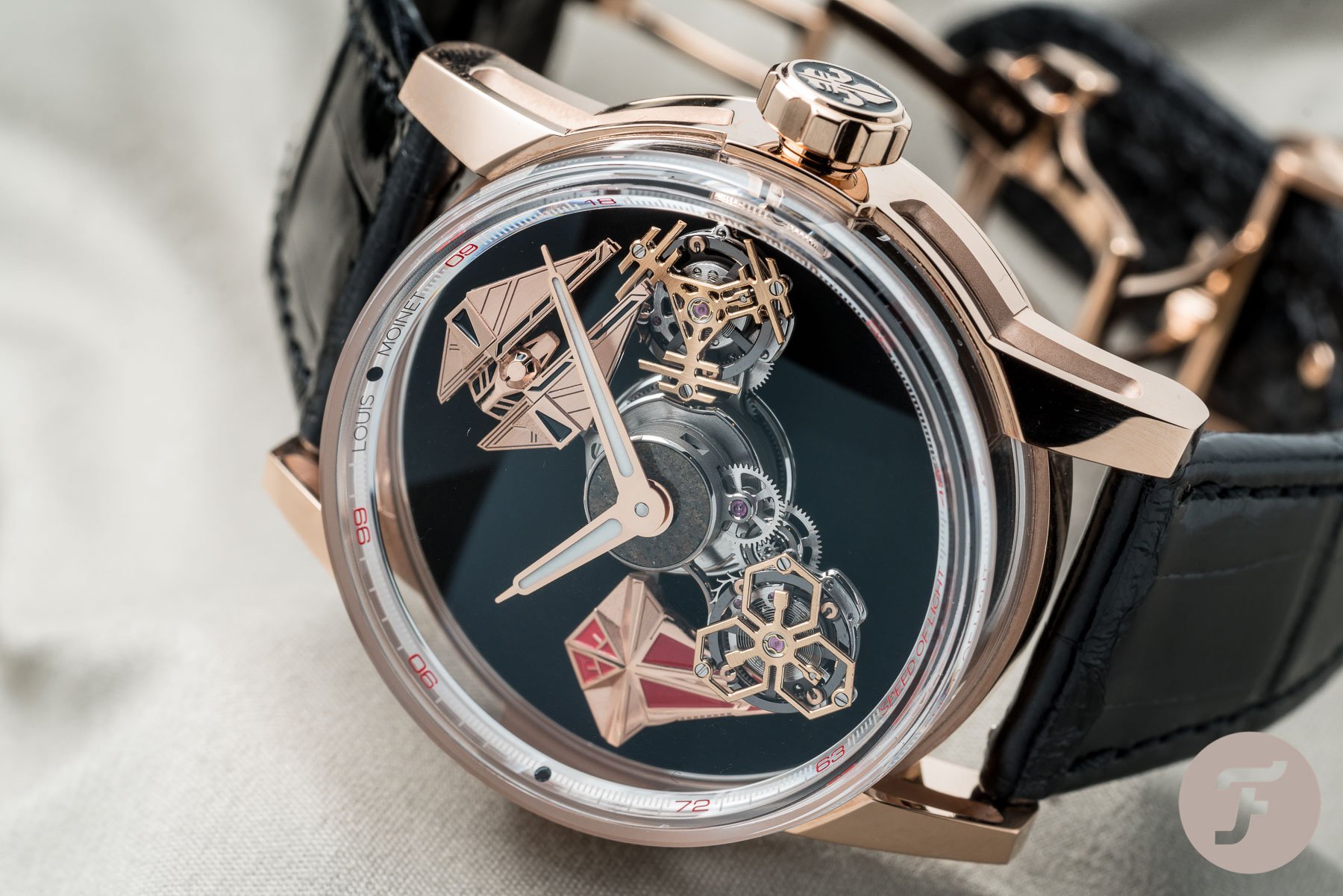 We have just had the most reserved piece in the roundup, so let’s flip reverse it and talk about the craziest piece in the collection. Yes, the Louis Moinet Space Revolution is just that. Just looking at this watch has me imagining a never-ending three-dimensional galactic battle, with laser sounds pinging inside my mind. My inner child is loving it.

The action is represented by two miniature 18kt rose gold spacecraft, rotating in opposite directions, facing off and flying past each other eighteen times every hour. Two independent flying tourbillons disguised as space stations counterbalance the spacecraft. Both of these tourbillons revolve in their own sixty-second cycle above the flat black emptiness of the dial. They rotate counter-directionally around the dial on two planes. The uppermost performs one complete revolution every five minutes and the lower one every ten minutes. 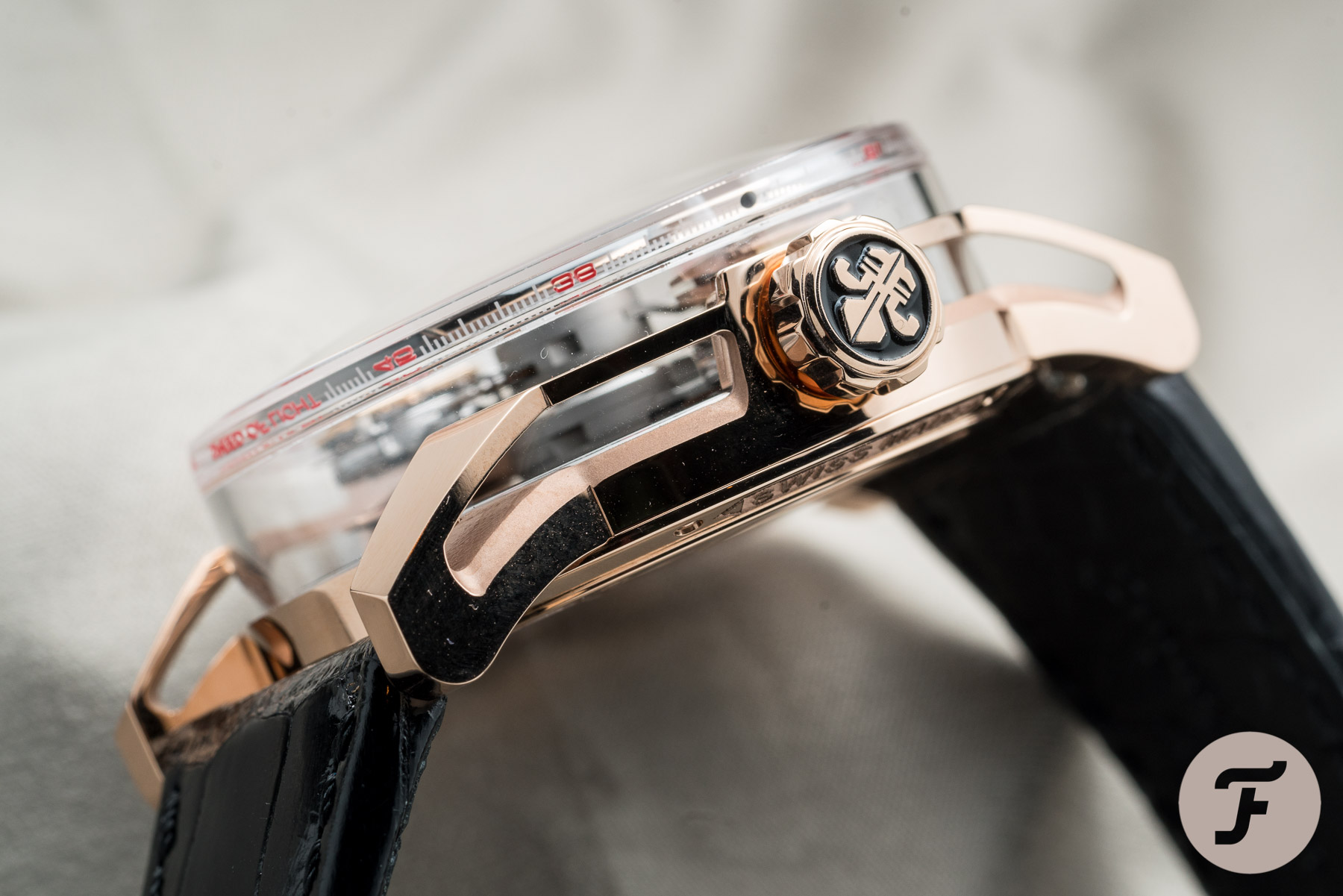 With all of this action happening, you wouldn’t want to miss a second of it, and thankfully you won’t have to. Thanks to clever case construction, you can marvel at this mechanical spectacle from every angle. A minimal rose gold frame holds a sapphire mid-case, topped by an imposing domed crystal. Maximum visibility! The Space Revolution is a limited collection of 8 pieces.

Artwork for your wrist

So there we have six pretty incredible watches from a pretty incredible brand. Whether or not you like these watches, you can’t help but appreciate the creativity and dedication to art found within each design. For those of you who are unfamiliar with the brand, do yourself a favor and spend some time looking through the collections on the Louis Moinet website.