A cool watch does not have to be an expensive one. I think we can all agree on that. (Vintage) Seikos are as cool as it gets, there are a bunch of divers that won’t break the bank and not to mention the 7733/7734 vintage chronographs. So for a few hundred euros you can get yourself a true conversation maker, something that looks and wears great. I have a watch for you today that fits exactly into this category. It has a unique, unconventional design that makes it instantly recognizable for watch connoisseurs. To prove that there is nothing new under the sun, it also served as inspiration for one of the leading and hippest independent watch manufacturers out there to create an iconic piece. So let’s dig a bit deeper into the 40-year-old history of the Amida Digitrend, shall we? 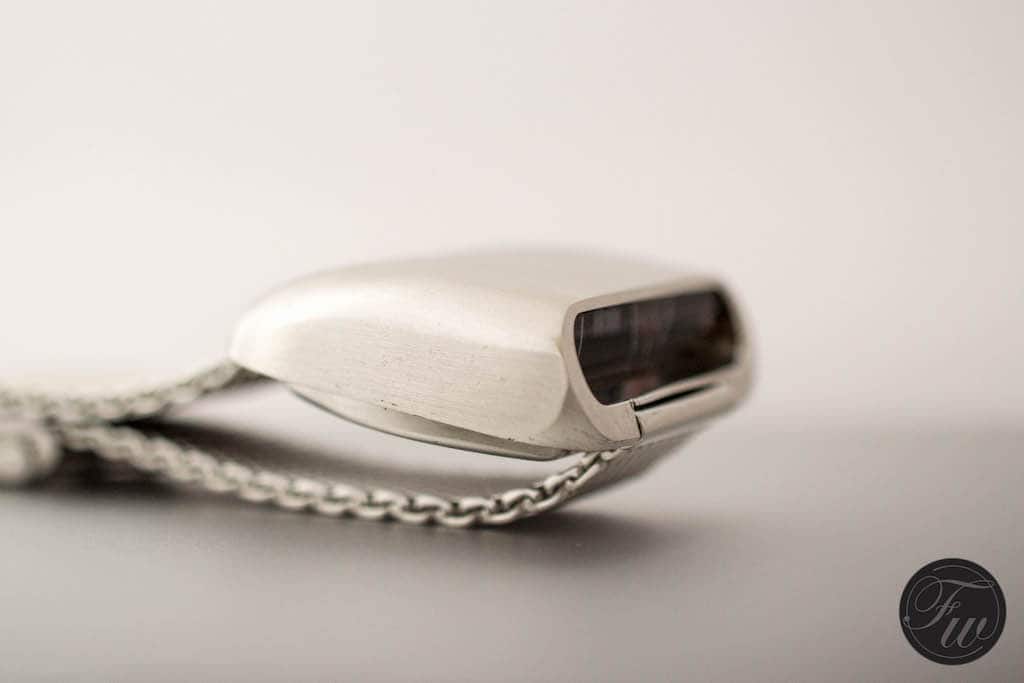 The Amida Digitrend was introduced in 1976 during Basel show. This was the time LED watches were pretty much the hottest deals on the market. To compete with brands like Girard-Perregaux and Bulova and to offer a budget solution, Amida released the Digitrend watch. The Amidas, like the GPs or the Bulovas, were not only aesthetically cool timepieces, they were also driver watches. A driver watch is a timepiece you can wear and check the time while holding onto the steering wheel of your car without turning your wrist. It displays the time on the side of the watch rather on the top making it visible for the driver at all times. Amidas were considered inexpensive compared to the GPs and Bulovas as the Digitrends were mechanical instead of using LED technology. Fast forward to 2016, most Amidas still run while many Girard-Perregaux and Bulova quartz movements have died in the meanwhile. 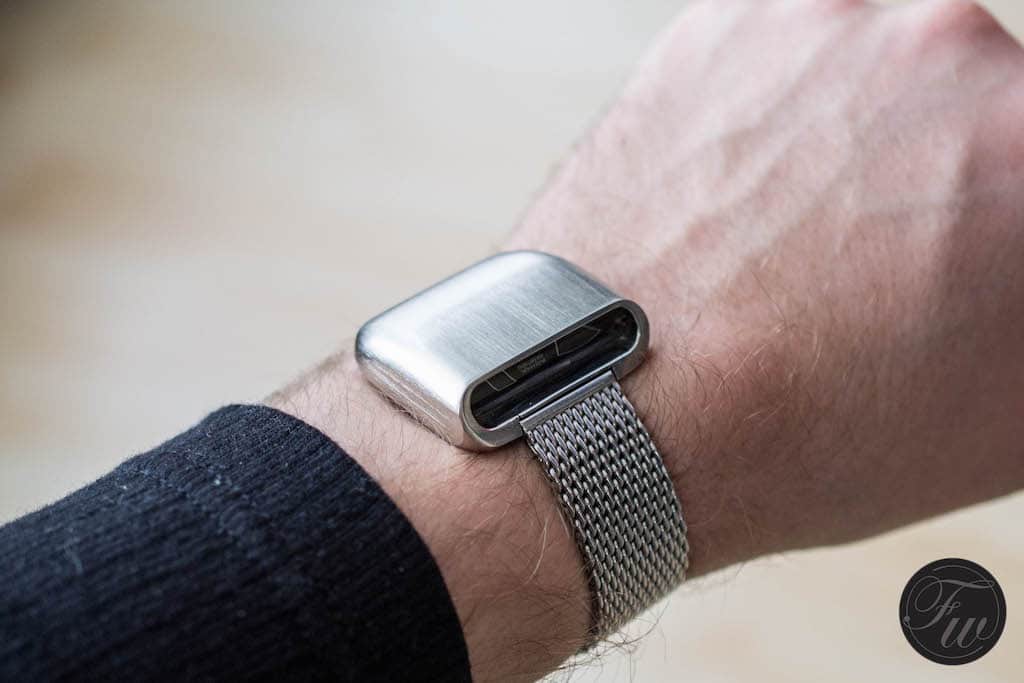 The Achilles’ heel of the Amida Digitrend is the movement. It is a 1 jewel pin-lever movement produced by Michael Berger Watch Company also known as MBWC. This was a company that produced cheap jump hour watches under various brand names, like Endura, Amida, Ingersoll and so on. Pin-lever movements however were not sturdy enough. The idea was to produce a disposable movement that the owner can actually swap if it breaks down on them. Many of these calibers did not survive the time. When I got my watch the movement was working on and off. I would wind it and it would run, but only to stop after a few minutes again. I took it to my watchmaker and he told me he couldn’t do anything with it. Luckily there is a solution to fix this issue. 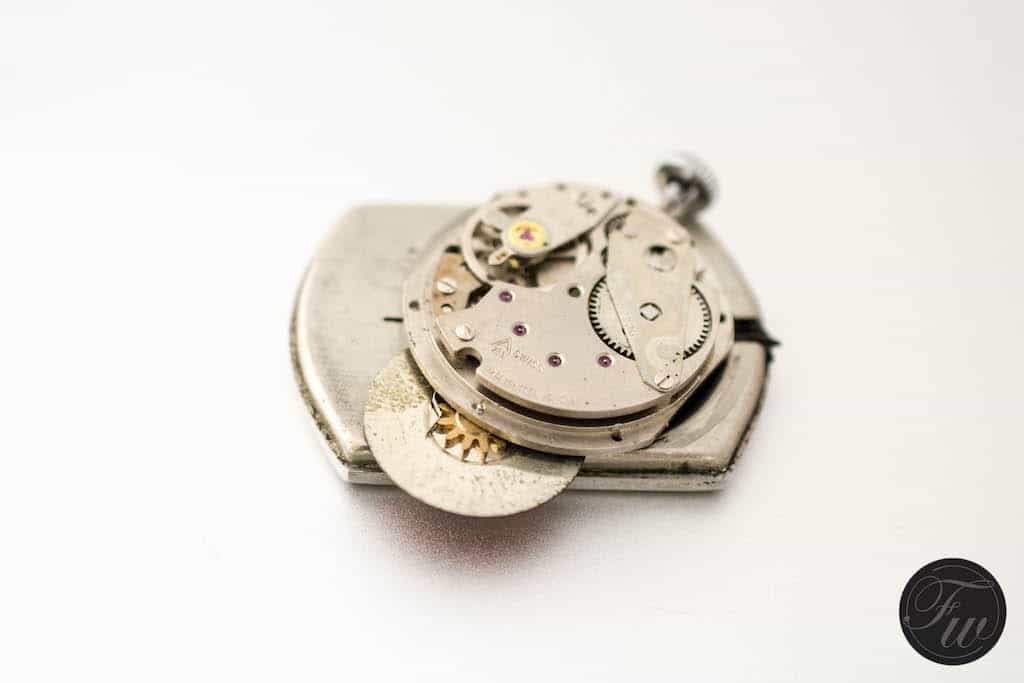 MBWC also produced calibers with 17J movements that actually fit into the case of the Amida Digitrend. They produced watches under the names Nelson, Simba, Dynasty or the aforementioned Ingersoll. These jump hour watches usually had 17J movements that a watchmaker could swap. So this is exactly what happened. I sourced a donor watch and my watchmaker did the “surgery”. It was pretty easy; he had to remove/swap the hour and minute discs then the crown, regulate the movement and done. From start to finish it took maybe 10 minutes. Even though the watch does not have the original movement it came in, it has something better and more reliable. The new movement runs as it should the time keeping is fine. I put on my Amida in a rotation probably once a week or so and the it is wears and works just great. 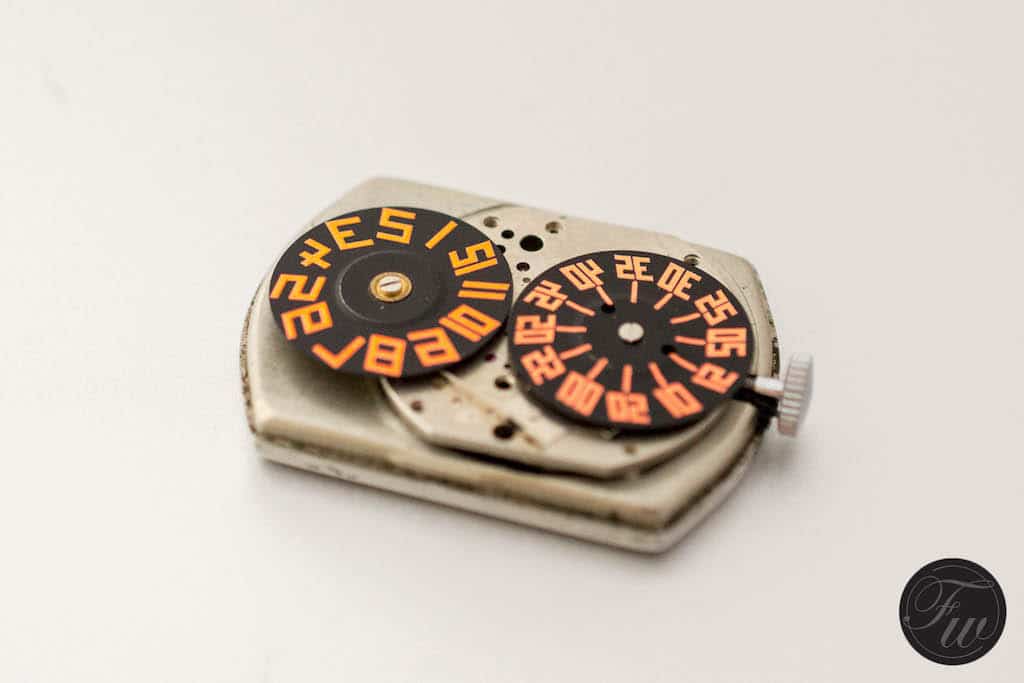 The case of my Amida Digitrend, as you can read on the bottom of the case back, is basically made of metal with a chromed cover. Amida also released a gunmetal black version. The “steel” version had a steel bracelet, the black came on a plastic rubber-like strap. Other than the strap and the color both watches were exactly the same. The size of the timepiece is quite impressive. It measures 42mm including the crown and 38mm from lug to lug. The watch takes a standard 20mm strap but the space is rather small so you can only put slim straps on the Digitrend. What’s interesting however is not really the size but the shape of the Amida Digitrend’s case. It is as 1970’s as it gets. When strapped to your wrist it looks like a big piece of steel with a cutout on the side. This is where you have the “dial”. 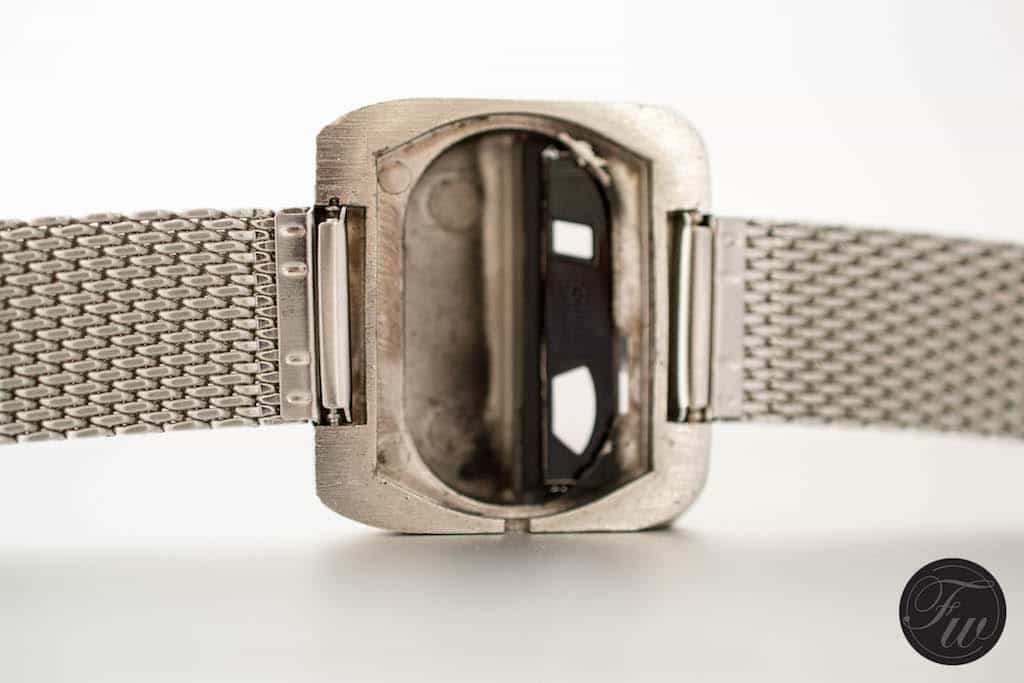 The 70’s sportscar-like case shape was an inspiration to MB&F, but let’s not rush there. The time, as in case of most jump hour watches, is shown by 2 rotating discs. These discs (minute and hours) lay flat on top of the movement facing up. But then how does it show the time on the side? There is a plastic prism in the shape of a triangle that serves as the crystal of the watch. This prism works like the submarine’s periscope and projects the horizontal image vertically. This technology, LRD (Light Reflective Display), is a fancy term that covers a much simpler execution. It is a neat feature, something out of the ordinary. 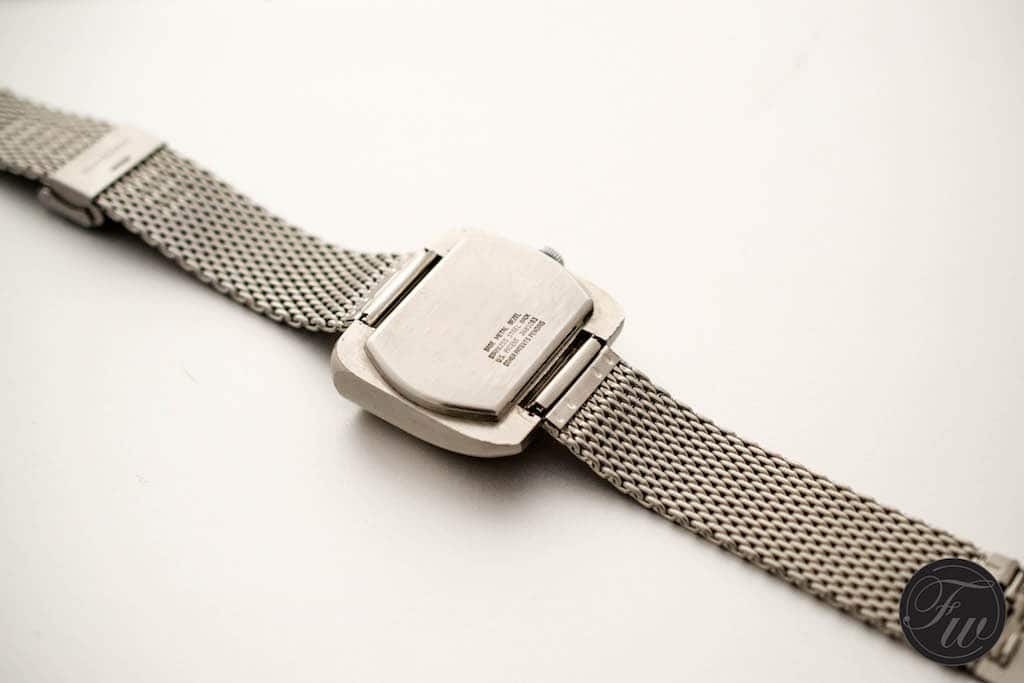 Four years ago MB&F released their 5th horological machine, the HM 5. The inspiration clearly came from these 1970’s drive watches. Girard-Perregaux Casquette and Amida Digitrend were the pieces that formed the backbone of the idea. Inspiration also came from the automotive world, from cars like the Lamborghini Miura, Lotus Esprit and Lancia Stratos. The HM5 used a similar prism to display the time, like the Amida. The case shape also resemblance our TBT topic. It was an instant hit and remains still one of the most sought-after MB&Fs ever produced. I’m a big fan of the watch not only because of the obvious connection to the Amida but for the great balance they achieved, putting a little bit of every car and watch that inspired the HM5. 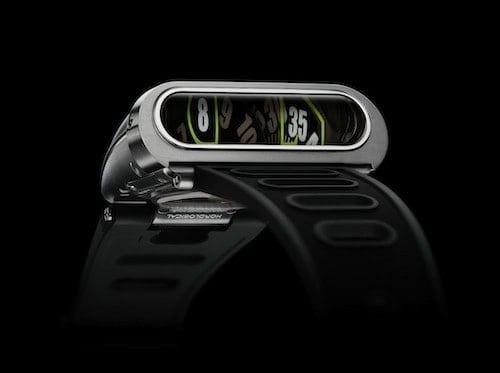 Since I bought mine I keep an eye on the prices of the Amida Digitrend. If you are lucky you can pick one up around €250-300. Be aware however that these watches usually still have their original 1J movement. A donor is relatively easy to source and won’t break the bank. It mostly costs around €50-75. The Amida does pop up on watch forums and eBay sometimes with crazy high prices though. Note that the cool factor in this watch is the design, not the technicality. So while I agree that every watch is worth the price someone is going to pay for it, I personally would not pay more than €500-600 for a nice piece. This is only my view of course. One thing is for sure the Amida Digitrend is a super cool timepiece that can hold its own against any big brand during a watch meet-up. 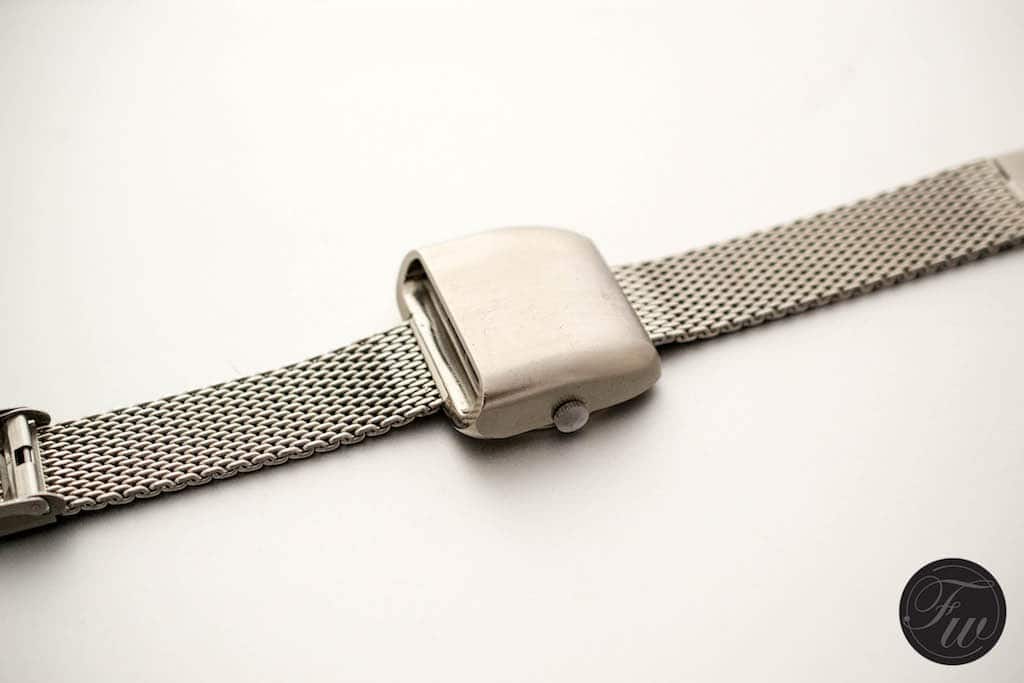 If you need further info on these lovely vintage watches visit this site for some great info and resource.