Saying this watch is a keeper is an understatement. The Avia Ajustor, with its witty balance spring micro-regulation system, has real museum potential if you ask me. This tiny ray of sunshine proves (once again!) that you can go super-low budget to score an unusual piece that hides genuine watchmaking spirit.

When I spotted a crazy Sperina Regulator a few years ago, I had no idea this “stunt acquisition” would evolve into an entirely new category of vintage watches in my collection. The idea behind self-regulators — watches that allowed external regulation of the balance spring — was to let the owner fine-tune the precision of the watch movement. 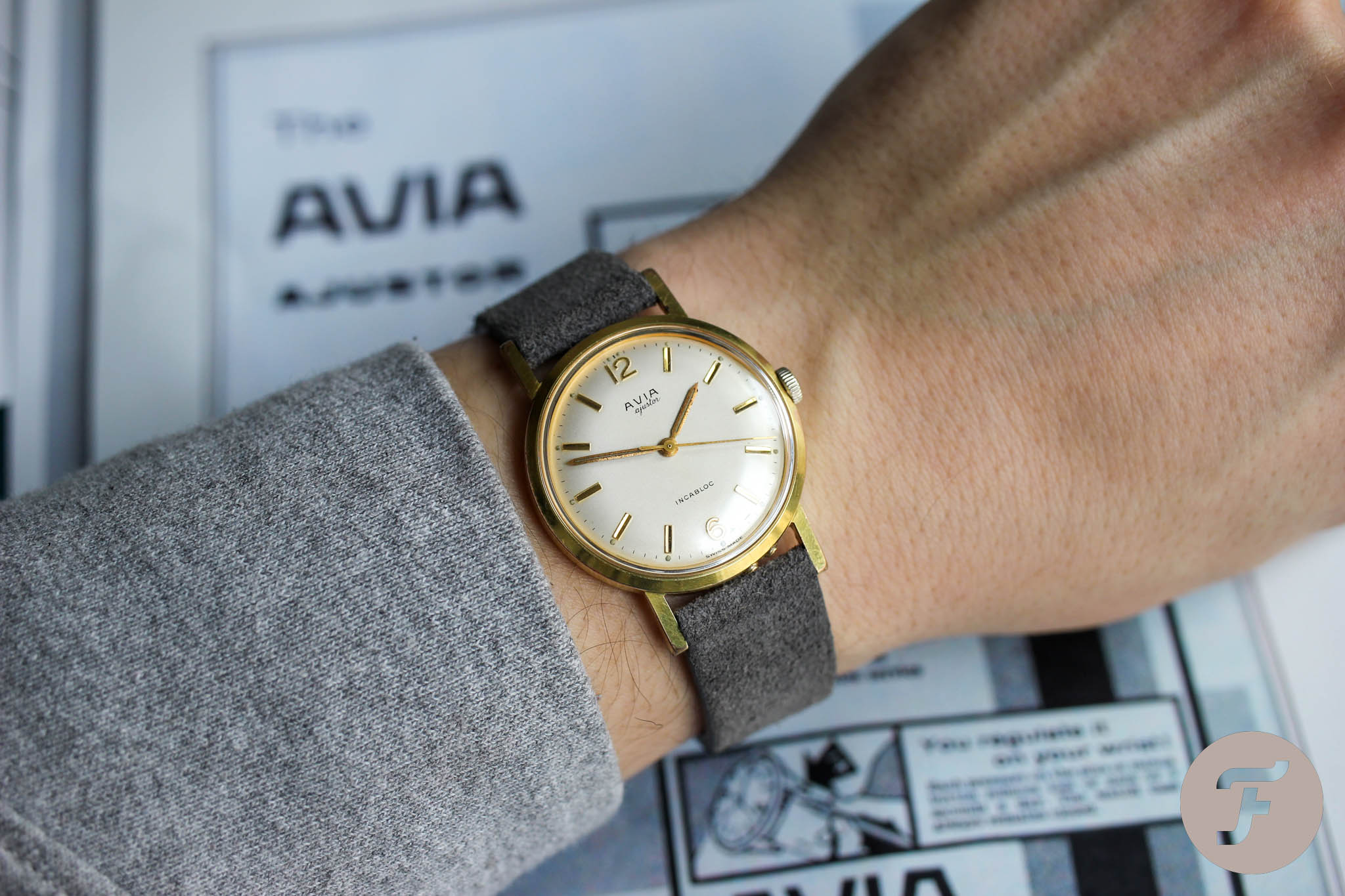 Historically, mechanical watches were either a bit fast or easily ran a few minutes slow every week or two. Especially the cheaper ones. Self-regulating watches brought an attractive promise that you could micro-adjust the effective length of the balance spring yourself. And not only without paying a visit to your watchmaker but also without even taking the case back off. There was a system of wheels and levers operated from the outside of the case. In the case of Sperina, you even had a special indicator showing you the limits.

No matter how big a fan you are of chronographs or divers, the external micro-regulation of the movement was a really big idea. It was revolutionary in terms of its usability, its profound simplicity, and the impact it might have on the very core function of the watch — to tell the time precisely. After picking up the Sperina, I scored an even more sophisticated Pierce Correctomatic. That prompted even deeper research that led me towards the Avia Ajustor, another innovative system amongst micro-regulated watches. 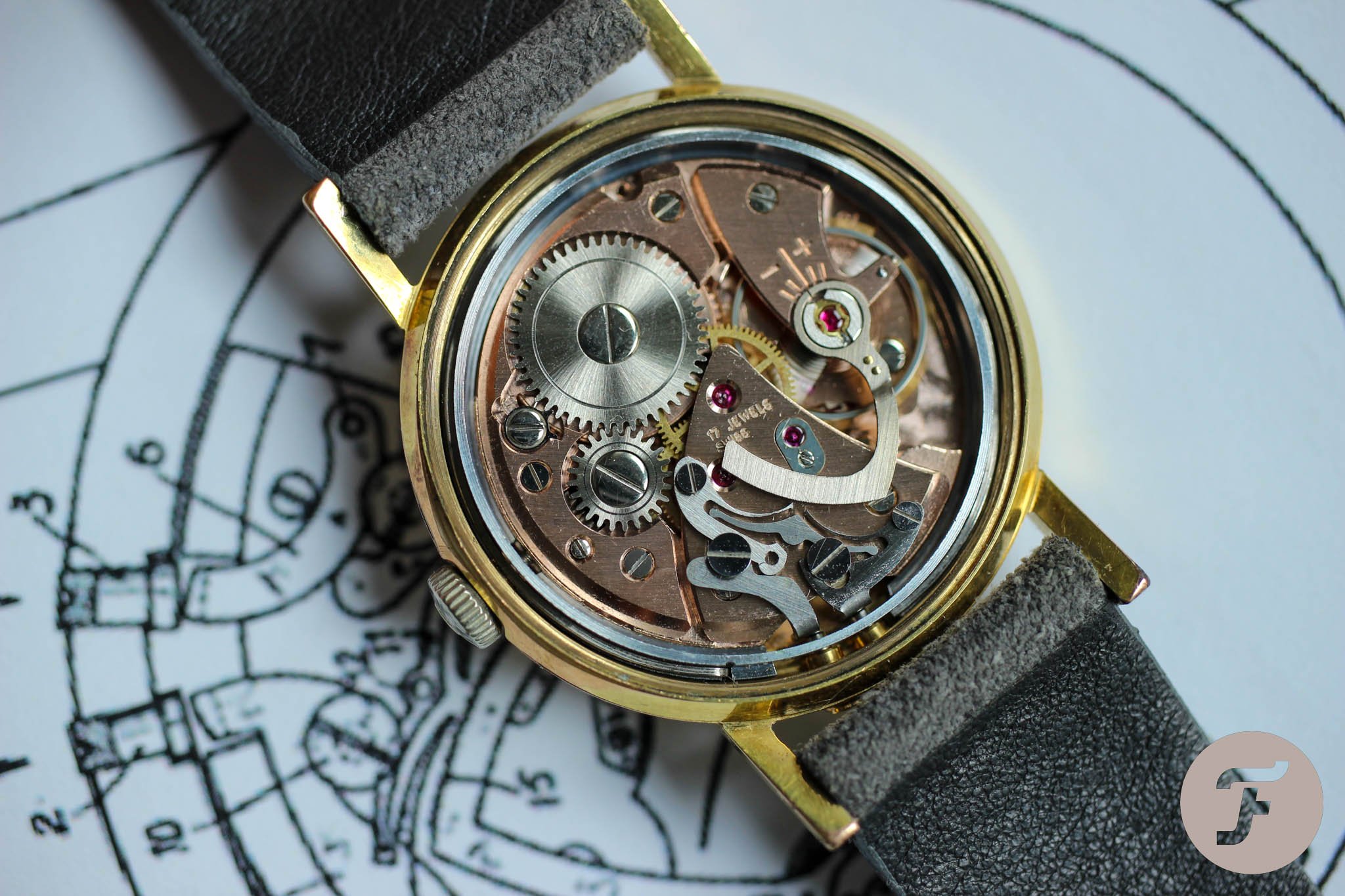 How does the Avia Ajustor work?

The balance-regulating system in the Ajustor is built upon a basic FHF73 movement. The core element is a massive regulator arm that looks like a hook. If you look more closely at the side of the arm, you will notice very delicate teeth on it. Adjacent to them, you can see a pair of arc-shaped levers positioned opposite each other. They look like two predators jumping and fighting over their prey. And they literally do. 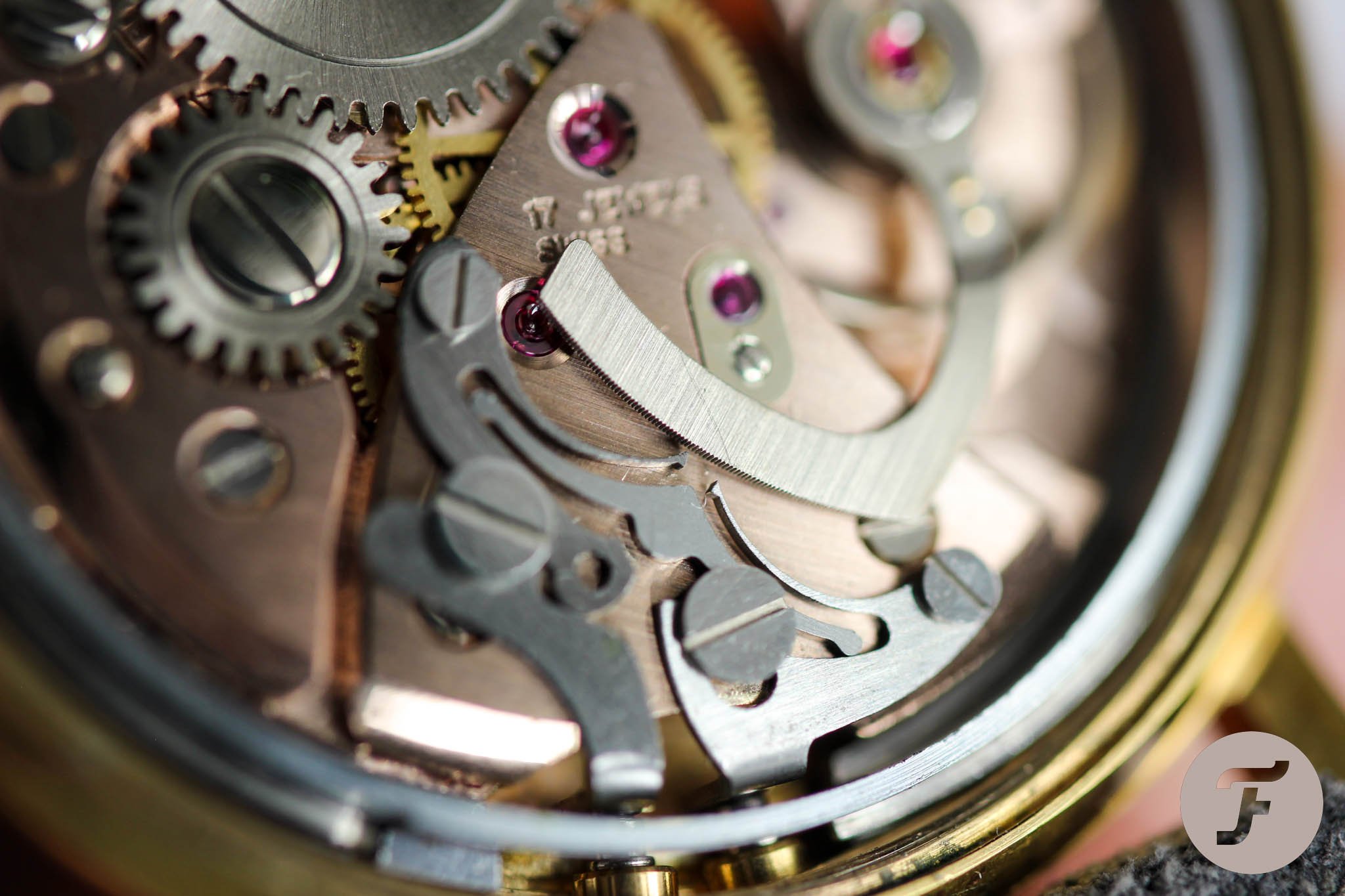 Once you press one of the +/- pushers hidden decently between lugs, one of the “predator” levers bites into the regulator. It consequently makes it move a tiny bit. It’s pretty satisfying to watch, but you’ll need to put on your loupe. If you check promotional ads for the Ajustor from 1960 and ’62, you’ll read that each press changes the gear by plus or minus five seconds.

After my watchmaker give my Ajustor the full spa treatment, we ran a simple check on his vibrograph. Before the test, the Ajustor showed +8 seconds per day. We pressed the minus pusher four times and put it back on the vibrograph. It then showed -8 seconds per day. Another two presses of the plus pusher got it to 0.2s/day. Happy enough, I took it back home for a hands-on test. After all, true precision depends on the positions you keep the watch in throughout the day. 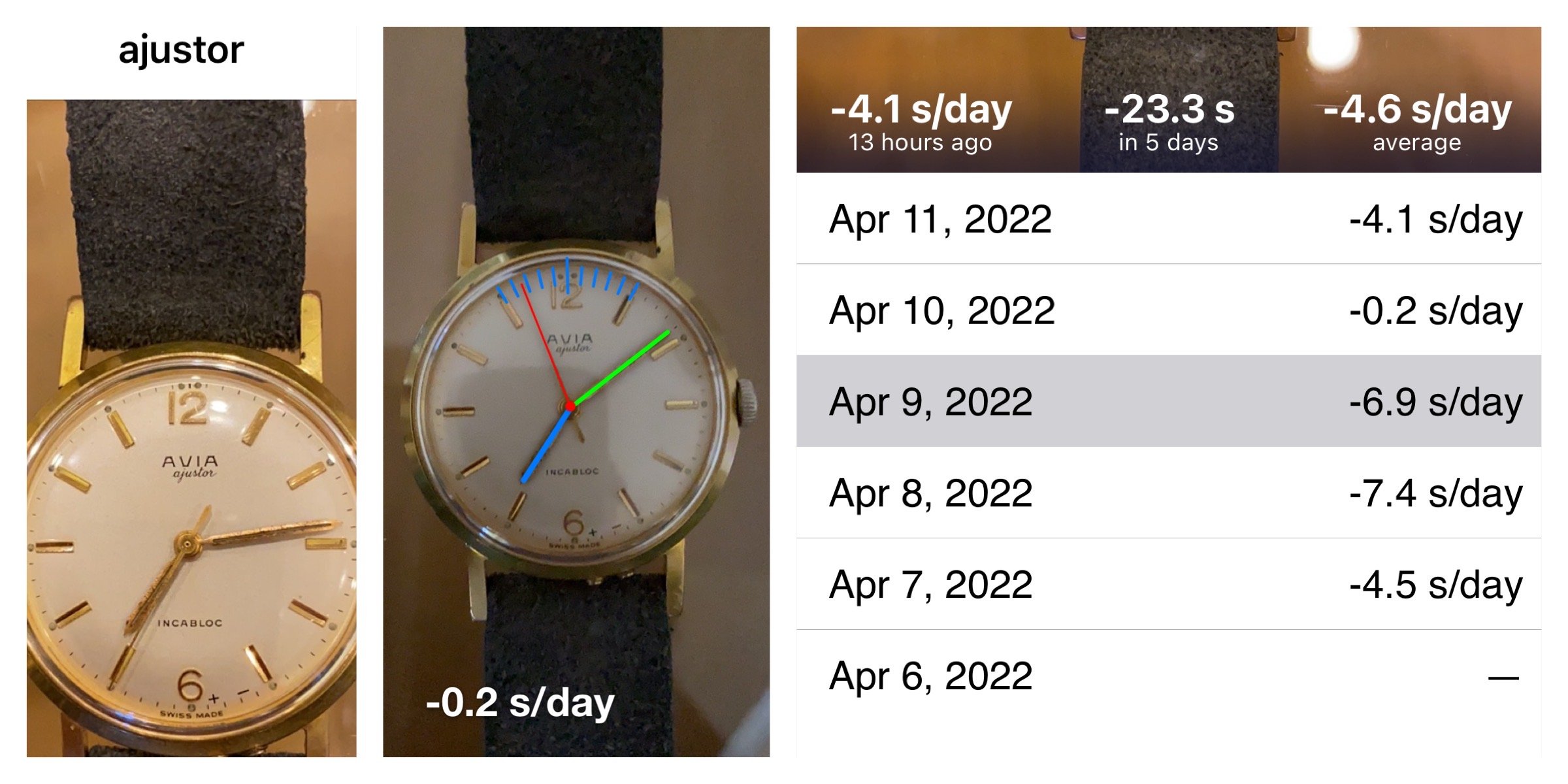 As you can see in the measurements above, during the first three days of more or less the same office routine, the Ajustor scored -4.5, -7.4, and -6.9 seconds per day. On the fourth day, I was at a swimming pool during a weekend with kids, so I left the watch fully wound on the table in the hotel room. When I read -0.2 seconds per day, I was pretty impressed. “It’s really a simple and effective system. It seems reliable, and I like it much more than the previous one you brought,” said my watchmaker the day he handed me the Avia Ajustor after the service. 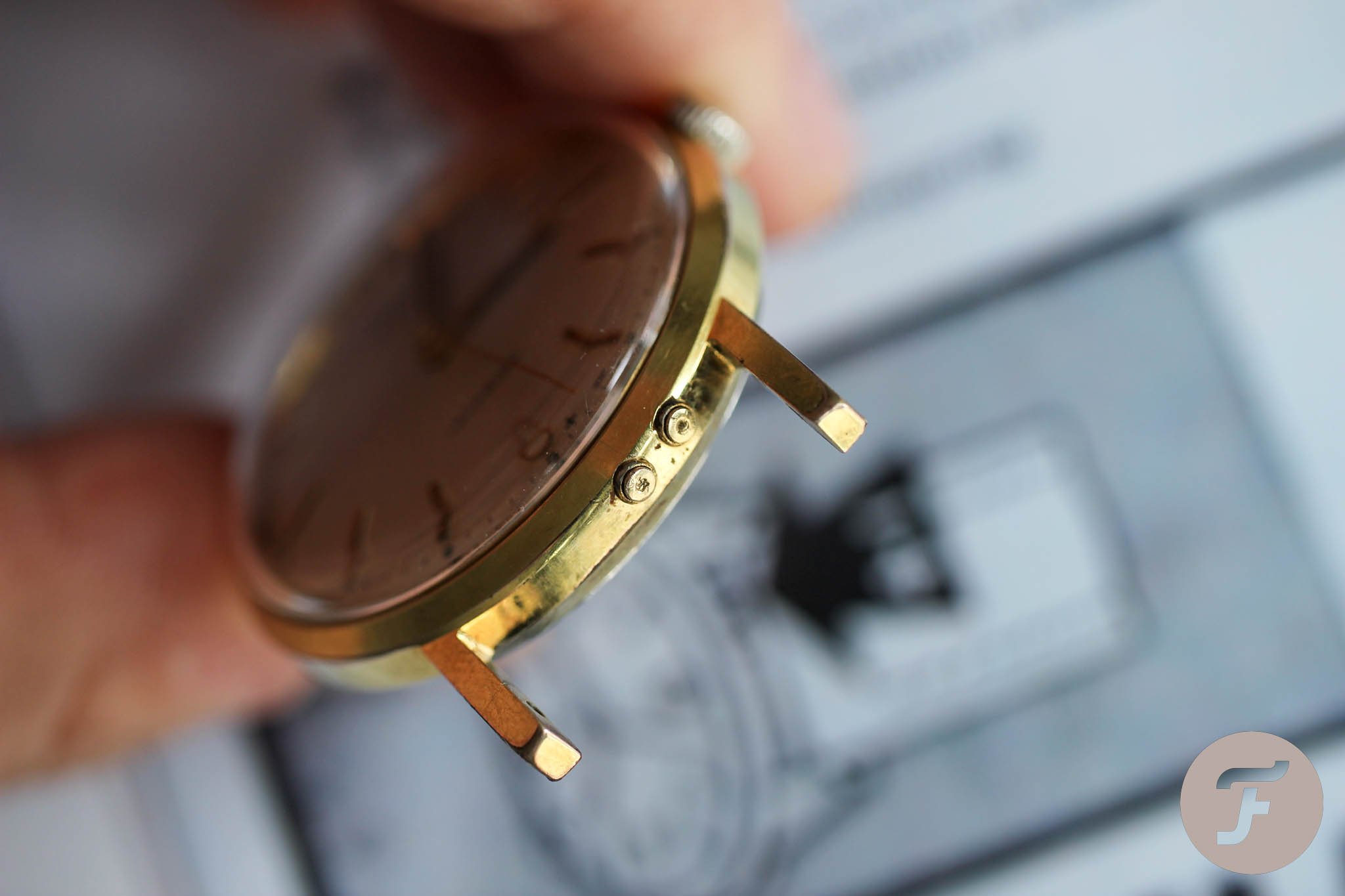 Thanks to the research by Andrew Kelz, we know that “the associated Swiss patent CH321947 comes from Fernand Etienne from La Chaux-de-Fonds. It was filed on August 20, 1955, and granted on May 31, 1957. The French patent FR1155849 by Fernand Etienne describes the same invention. A few months after filing the patent, Fernand Robert Etienne also registered the AJUSTOR name under number 160316 on March 26, 1956.” 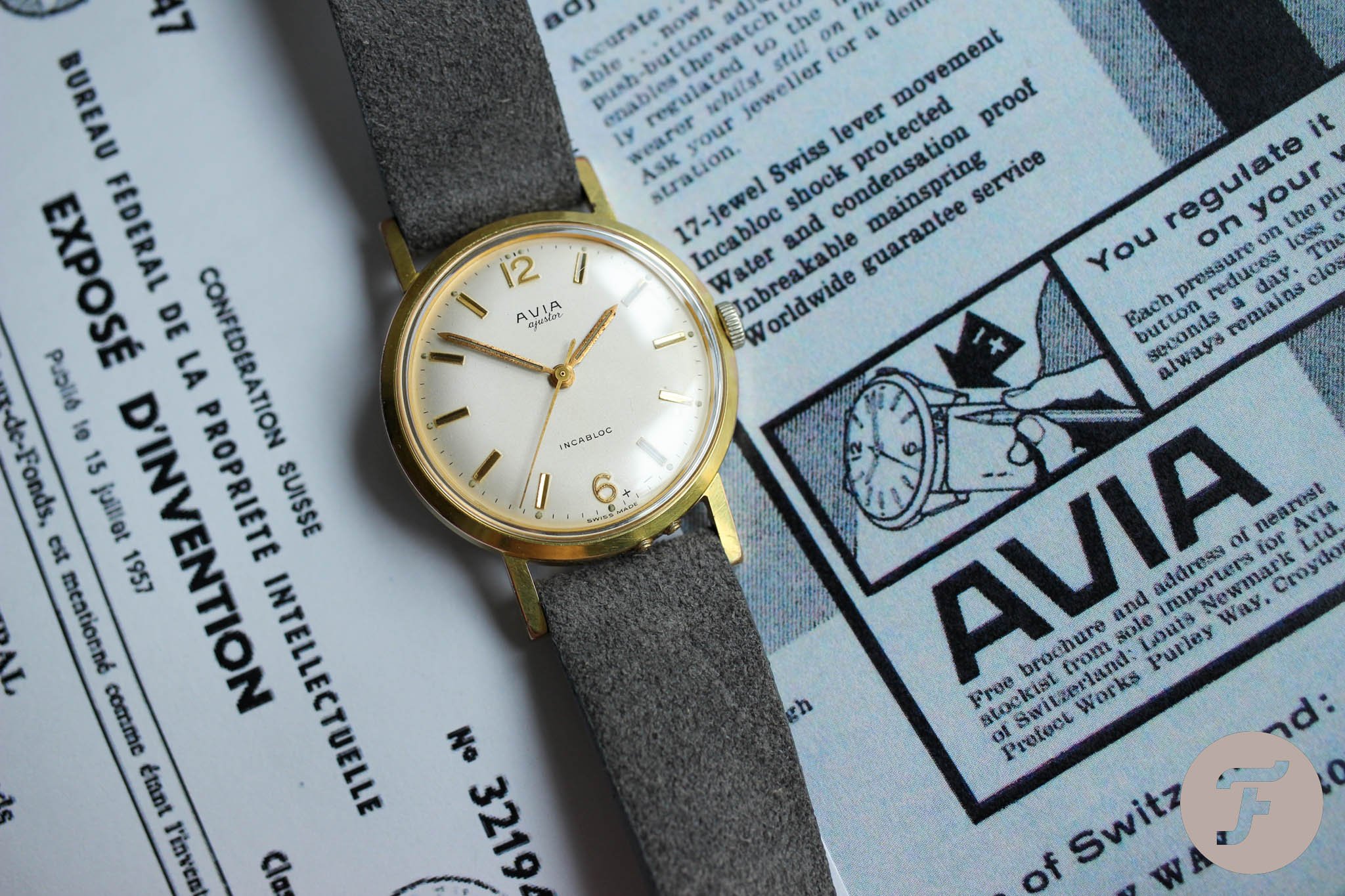 Interestingly, you can find the Ajustor system integrated into multiple watches from different brands. Besides Avia, you can find Ajustor printed on Montdor, Telda, or ZenTra dials. They were all simple time-only dress watches with different dial and case executions. Orignally, I had no special preference, but as I managed to buy original Ajustor ads from the 1960s, I preferred my example to be from Avia. I also have another unusual Avia with an uncommon big-date movement from Venus.

I still have my Ajustor auction robot set. If I remember correctly, there were three Avia Ajustors that popped up last year. All were listed from the UK where Avia seemed to have a greater market presence. The only problem is that 90% of Ajustor watches I saw were beaten to the bone. And you know what a gold-plated watch with most of the plating “eaten” by time looks like… I recommend being patient. I feel it shouldn’t be a problem to land a decent piece with a bit of patience.

The only details suggesting the Ajustor hides something special inside are the two small +/- symbols on the edge of the dial. They are located between the fifth and sixth indexes, facing the pin pushers on the side of the case. The symbols and pushers don’t line up perfectly. Still, it’s clear which pusher to press when you want to slow the movement down a bit. The pushers are located on the side between lugs, slightly above the middle of the case. This is so you can operate them easily without unstrapping the watch. “When you press a pusher, make sure you press it strong and deep,” my watchmaker didn’t forget to highlight when he handed me a watch. 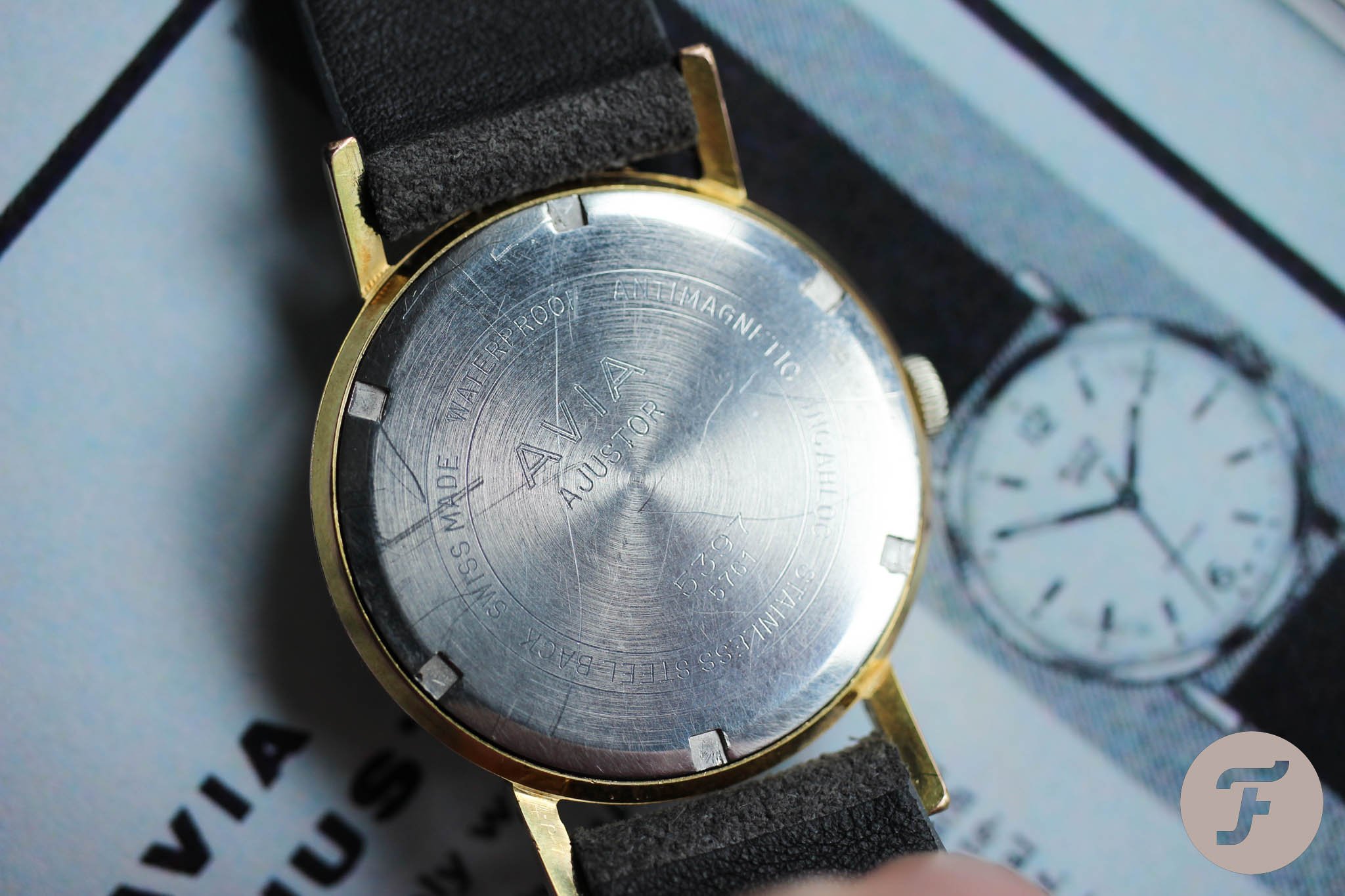 With a 32mm diameter, the Avia Ajustor is a pretty small watch with funny thin and flat lugs. They are surprisingly long, and if you look at them straight from the top, they kind of look like a ladder leaning against your wrist. Besides the signed crown, there isn’t much to discuss. Before writing this article, I wore the Ajustor for seven straight days and enjoyed it. It’s light, obviously, but the awkward lugs prevent it from getting lost on your wrist. And they are long enough that your colleagues can get hooked on them. I probably won’t put this watch on for the next family event, but I will definitely wear it on a day full of business meetings. Happy hunting!