If you’ve followed the vintage watch market to any extent, and #TBT for that matter, Enicar is a name that surfaces with relative frequency. The brand has become a darling to many collectors and for good reason; the watches were well built, uniquely detailed and generally well sized to current tastes. The bulk of the attention on the brand, though, has been centered on the chronographs such as the Sherpa Graph, Aqua Graph and others. Today, however, we move into another realm of tool watch from the brand: the world-timer. #TBT takes a look at an impressive piece that deserves similar attention: the Enicar Sherpa Super Jet. 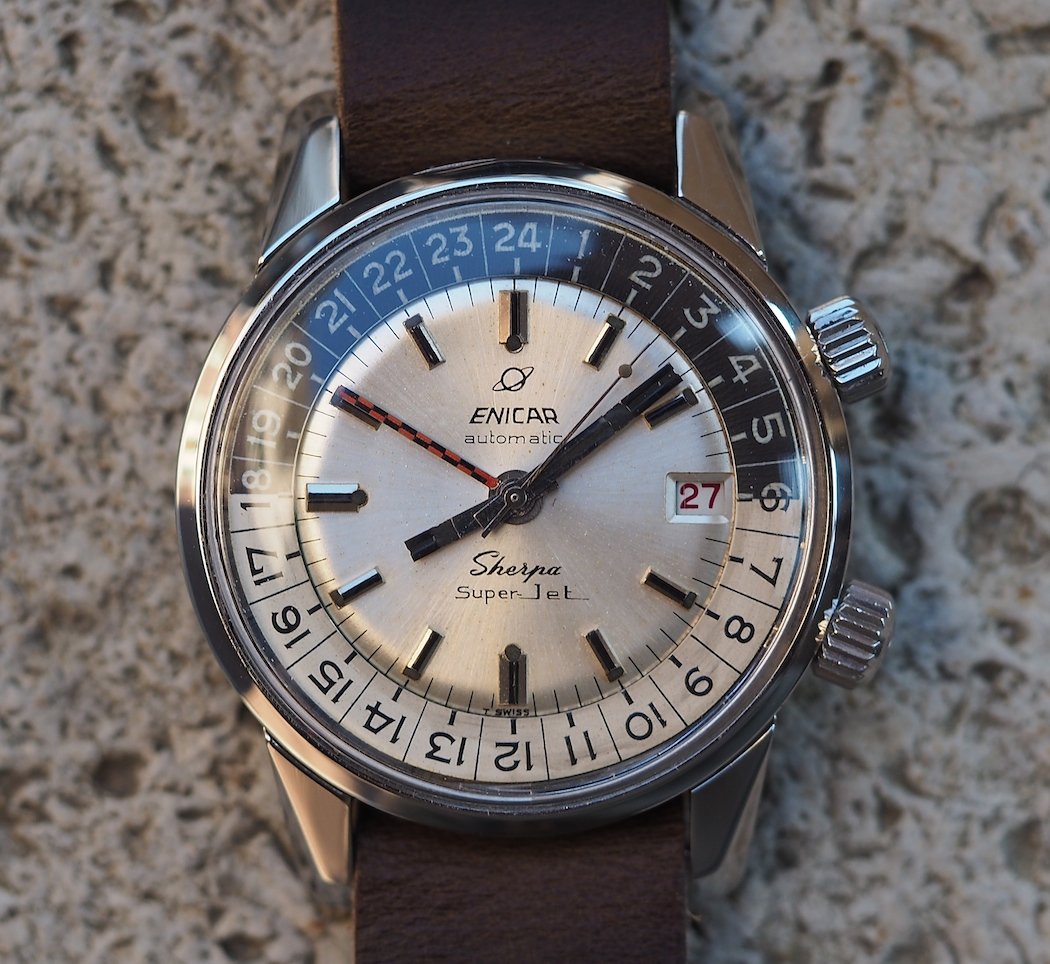 Many font differences on the dial of the Enicar Sherpa Super Jet only add to the charm.

It sounds fairly obvious to state that the airplane had a profound effect on timepiece design. As proof, we’ve covered several pilots’ chronographs here that were used to aid in everything from astro-navigation to being designed to notify a pilot when an engine was suitably ready for takeoff – and that barely scratches the surface. Aside from chronographs, though, another breed of watches came about for the purpose of showing multiple time zones. These world-timers kicked off with the Rolex GMT in the late 1950’s and other brands soon followed. In order to suit the need, multi-time zone watches generally employ an extra central hand that is geared to advance at half the speed of the hour hand. The hand generally points to either an internal or external rotating 24-hour bezel to measure one’s home time zone. It’s a simple but effective complication. With the increase in global travel on the surge in the 1960’s, the Enicar Sherpa Super Jet became one of the entries in the field. 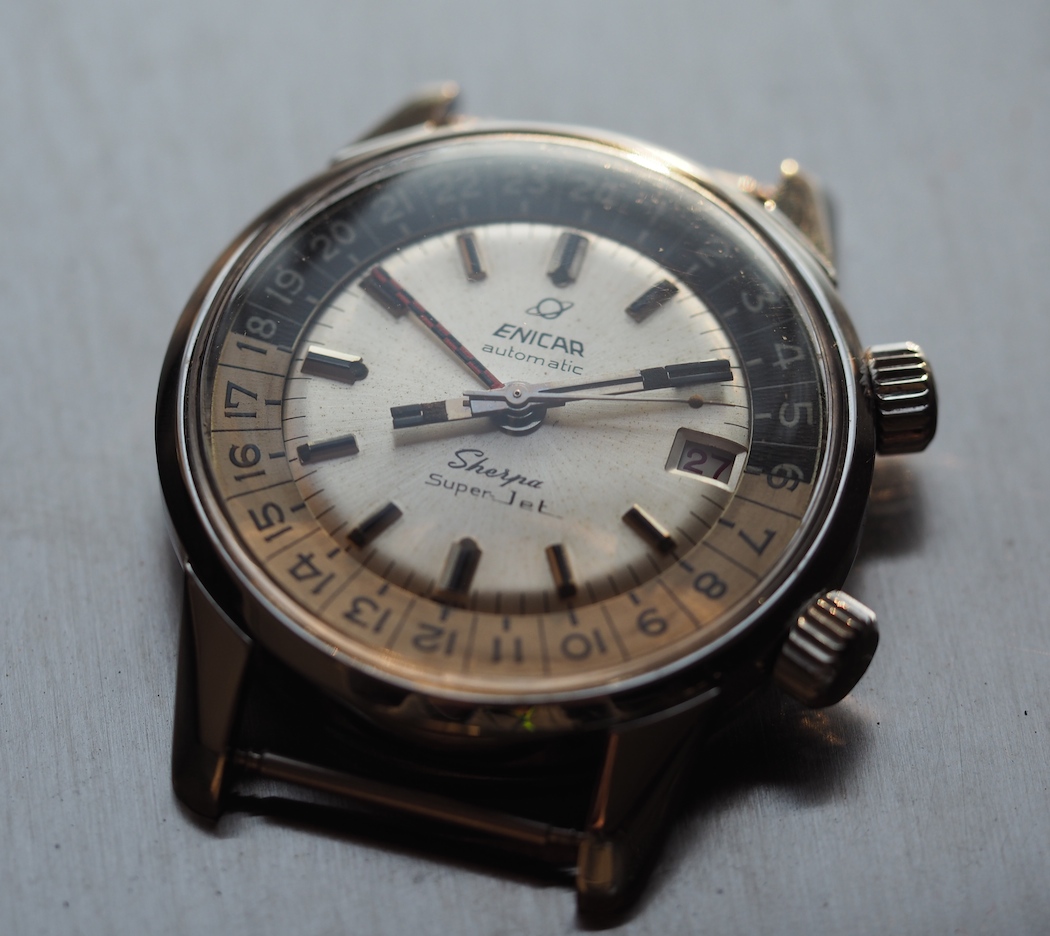 Simple clean font is used on the 24-hour bezel of the Enicar Sherpa Super Jet.

To be very open, world-timers, or “GMT’s”, as I call them, aren’t my favorite watches. I typically find them a bit busy around the edges and a bit of a “lite” form of tool watch. They’re made to be sporty and usually feature a diver-like case, but they often lack the depth capabilities of such watches. Well, with this Enicar, I not only found a GMT with what I consider to be a very well laid out design, but it also contains all the capacities of a diver. You see, the Enicar Sherpa Super Jet utilizes a Super Compressor case by famed maker EPSA. From the information that’s online, this points to roughly 600 feet of water resistance, which is not bad for a watch that was produced during the mid 1960’s. In fact, it shares its case with the dive offering from the brand, the Enicar Sherpa Super Dive. 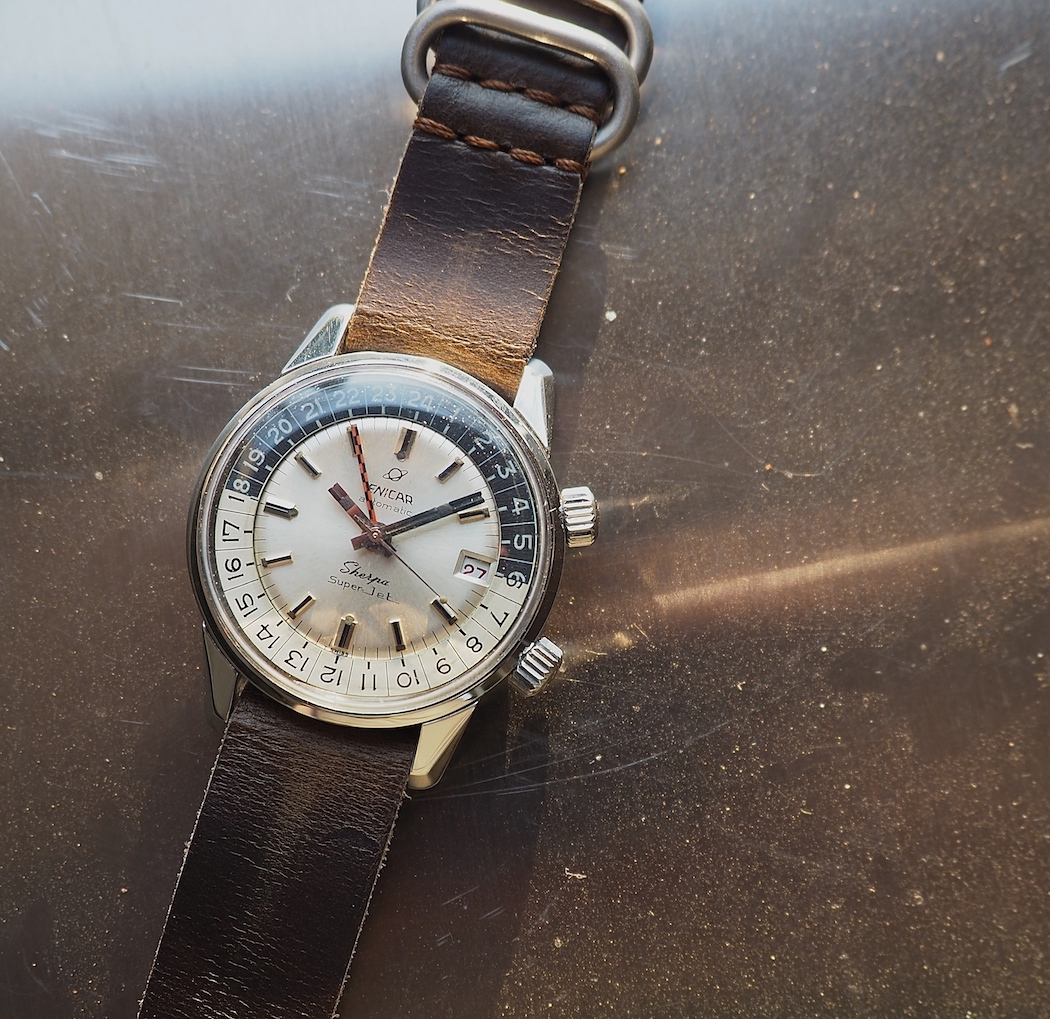 The large crowns give the Enicar Sherpa Super Jet an amazingly rugged look.

The Enicar Sherpa Super Jet comes in at a biggish 40mm in diameter and sports perfectly proportioned 20mm lugs. The case design, in stainless, is very similar to the Sherpa Graph I reviewed last year and it’s wonderfully well made. The look of the watch is substantial with its large domed crystal, slim outer bezel and clean dial.

Typical crosshatch patters found on EPSA crowns are in addition to the Enicar logo.

Adding to the feeling of solidity are two massive crowns on the right side with EPSA crosshatches and Enicar logos. In pictures, they look big; in person, they’re huge like old TV knobs – and badass. The top crown smoothly rotates the internal bezel while the lower adjusts the time and winds the movement. 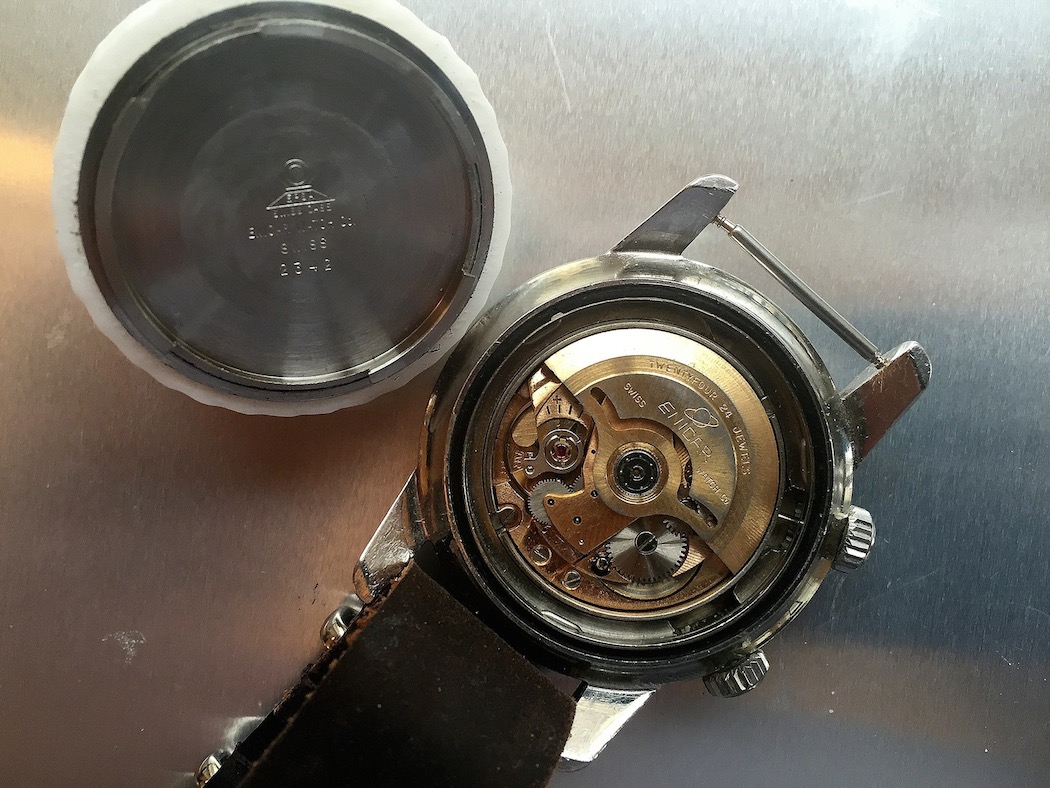 Speaking of the movement within the Enicar Sherpa Super Jet, it uses an in-house AR1125 automatic. The “AR” stands for Ariste Racine, the founder of Enicar – spell “Racine” backwards and you’ll get the picture. It’s a lovely 24-jewel movement that ultimately allowed Enicar to move away from ebauche supplier Schild and formed the basis for the brand’s later “Supertest” movements. These movements became the brand’s chronometer equivalents. The 1125 beats at 18,800 bph, has a power reserve of roughly 45 hours and can be hand wound. It features the GMT hand that cannot be independently set and a non-quickset date. My experience so far is that it keeps amazing time. All in all, the development of in-house calibres complements what we learned about Enicar’s adjusting of Valjoux 72’s for its chronographs. Yes, this brand was really a bit different than most at the time. 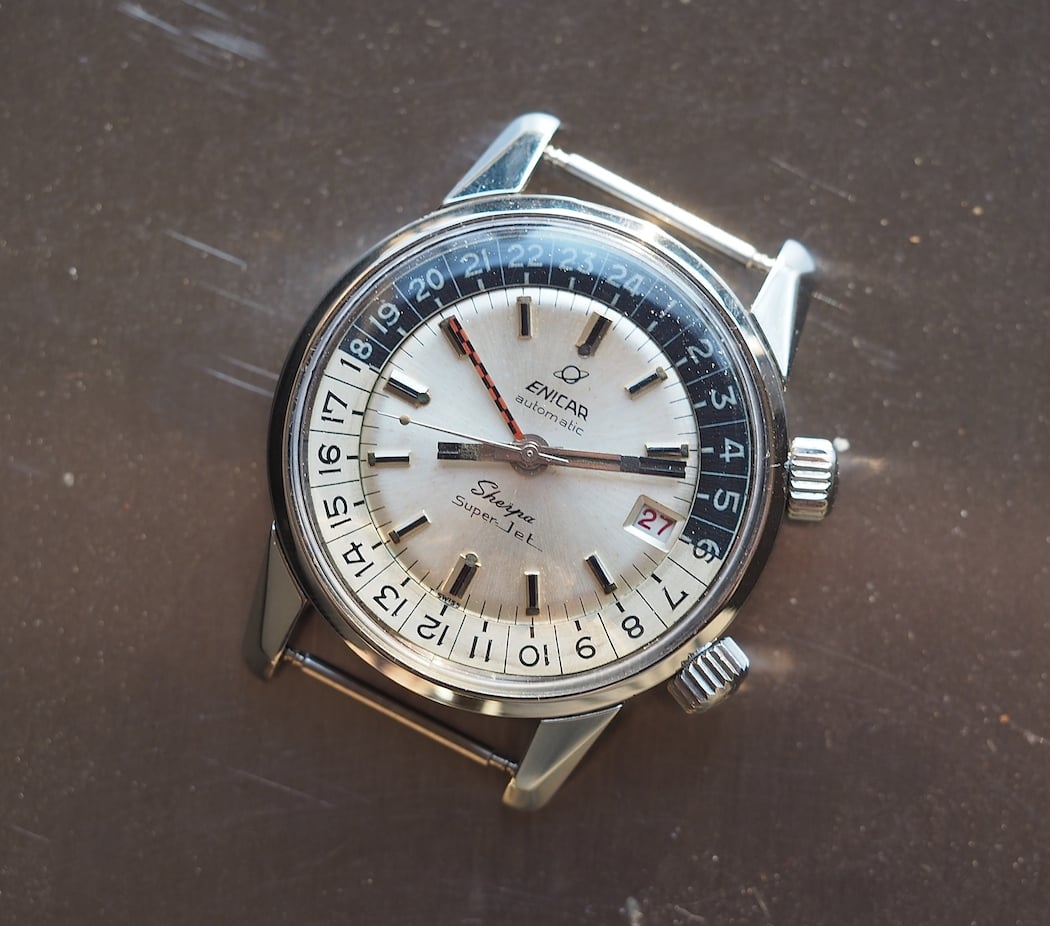 Wonderful details abound on teh Enicar Sherpa Super Jet such as a roulette date wheel and the amazing pip at the end of the sweep seconds hand.

From a detail perspective, the Enicar Sherpa Super Jet contains all sorts of neat attributes. The date wheel is roulette – meaning it alternates days from black to red font. The time zone hand is done in a wonderful black and white checkerboard pattern that most will come to recognize as a trademark for the brand. Then, see the sweep seconds hand and note an amazing lume pip on the end of it.  Likewise, take a look at that rotating 24-hour bezel.   The font is sublime and the black and silver colors keep things monochromatic enough to avoid being busy and overwhelming. Finally, I’m a big fan of the dial itself with its silver striations. Again, the quality is evident and roughly 50 years later, it still looks darn good. 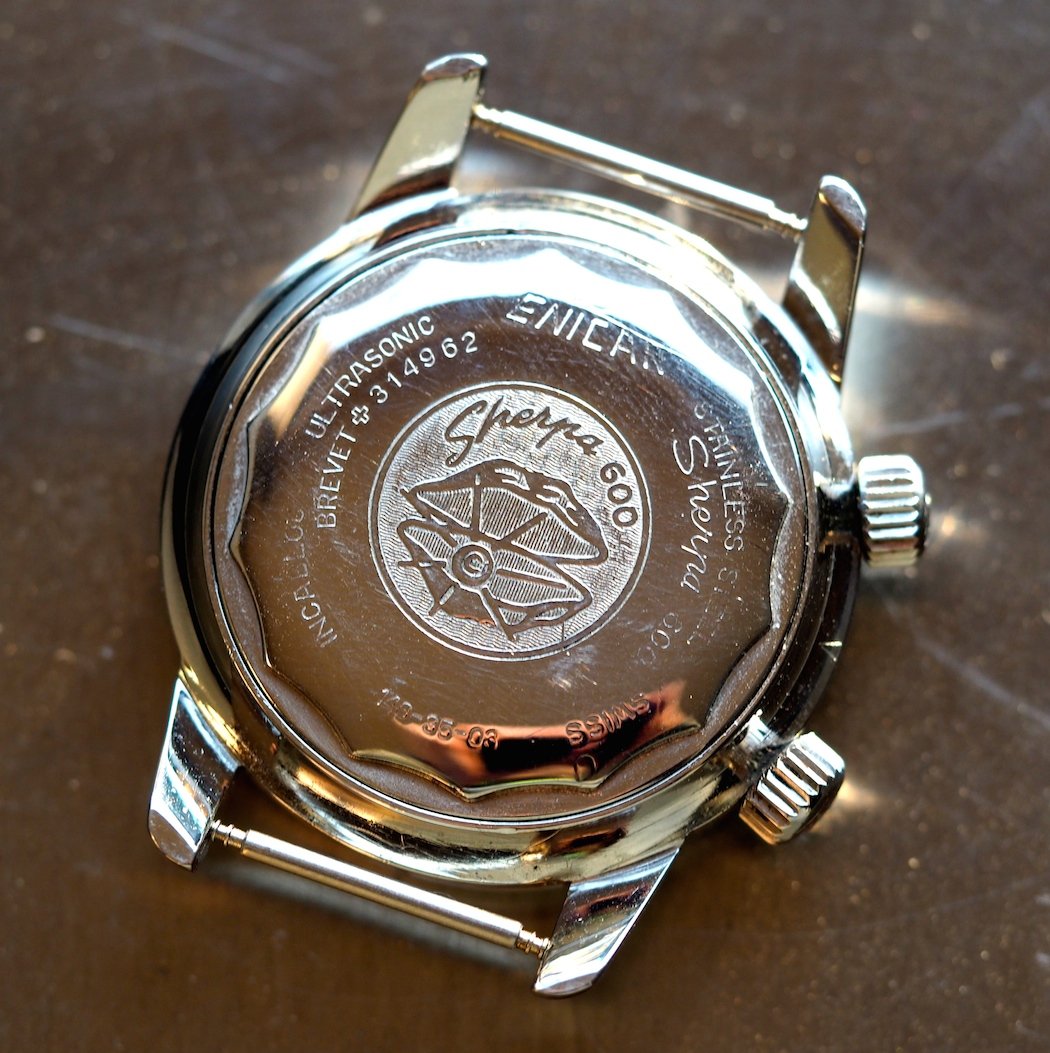 The Enicar Sherpa Super Jet features a gorgeous case back.

Flip the Enicar Sherpa Super Jet over, and much like with the chronographs, this watch has a highly detailed case back. It contains a lovely Sea Pearl motif and some information about the watch. As per typical with Enicars using EPSA cases, this piece utilizes a bayonet style closure. I’m waiting on a case back opener for these, but I’m ok being left to marvel at the wonderfully sculpted, scalloped ridges that are used to open the back. 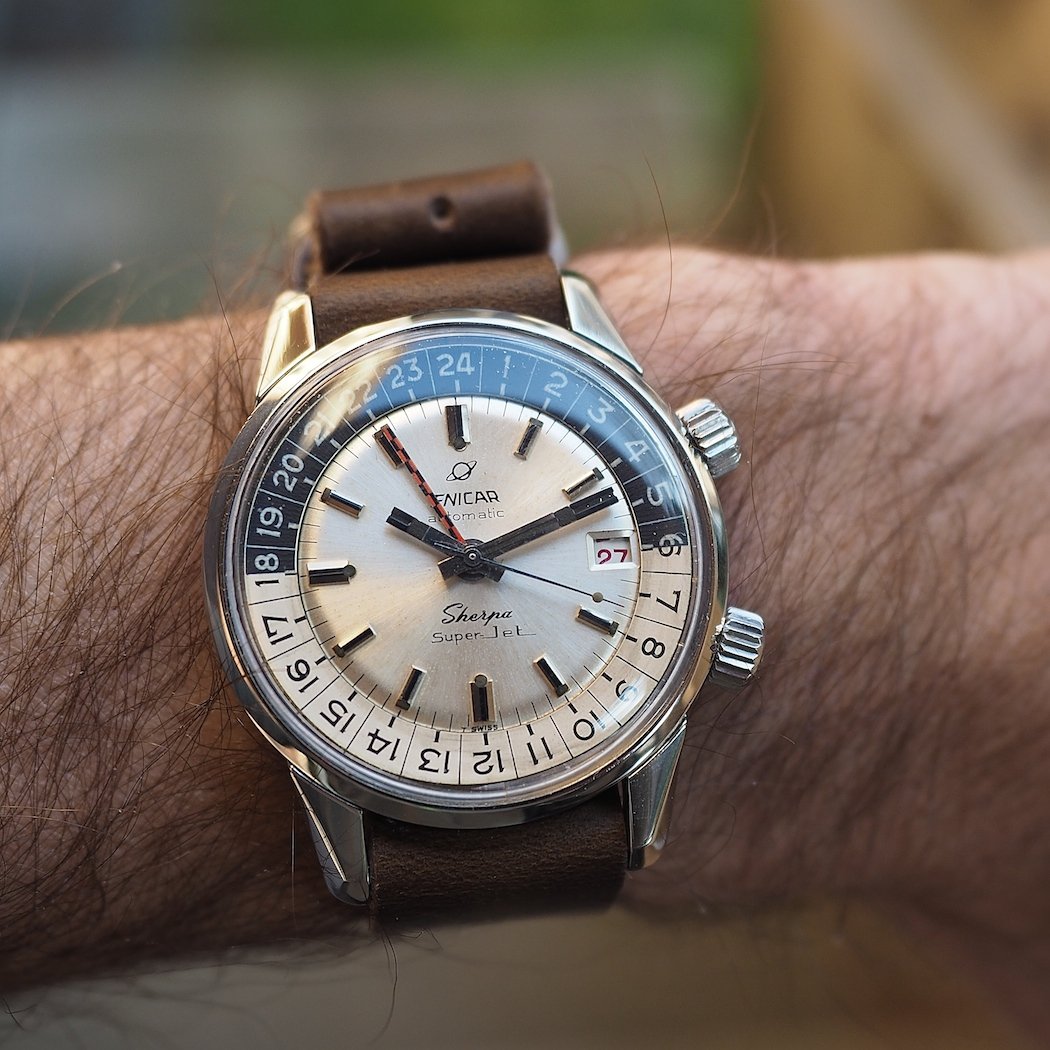 The Enicar Sherpa Super Jet wears substantially, but isn’t overly thick. The radiating dial and the polished case make it a real head-turner.

Andreas of LocalTime alerted me that this watch was arriving a month or so ago and I thought that it was the perfect time to try a Super Compressor. So many of these cases came in 36mm sizes – including a relatively similar Enicar Sherpa Jet – or were marketed by small companies, so the chance to own a large Enicar made the prospect all the more attractive. I’m glad I seized the opportunity because this is a lovely watch. When I received it, I was impressed with the quality and the heft and how well it wears. It sits wonderfully on the wrist and it even garnered some positive comments from about 10 feet away at a large, workplace dinner. 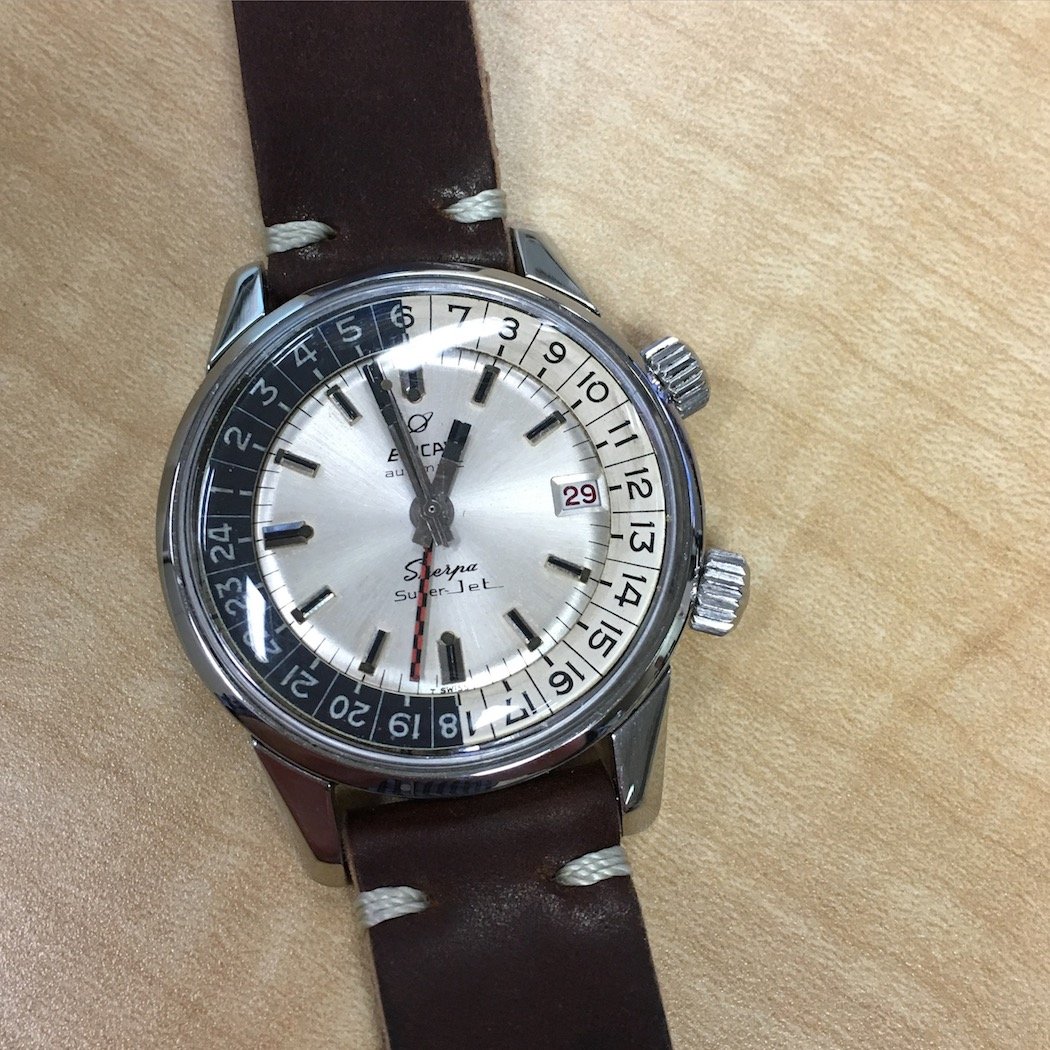 I’ve paired with leather NATO’s and currently have it on the Rover Haven Shell Cordovan strap; it looks great. Like I said, I’ve worn it for work and even tested the multi time zone function on a recent transatlantic trip. It’s a cool watch; there’s no doubt. 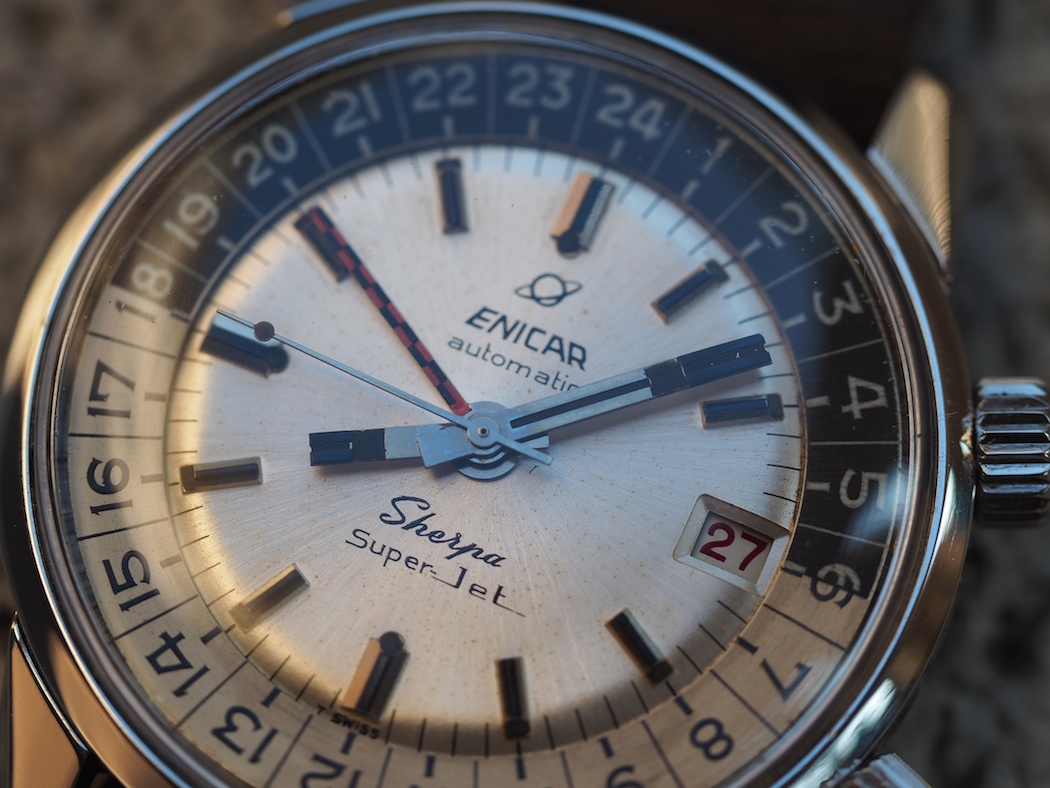 Checkerboard is a cool way to go on the Enicar Sherpa Super Jet.

Enicars are hot watches today and even the non-chronograph sport models have finally started to catch fire. Models such as the Enicar Sherpa Super Jet come up from time to time (available with the more prevalent black dial or this silver dial) and seem to sell in the $2,000 – 3,000 range. With a little luck, they might be available for less. Note that several variations on hands existed over the model’s production life; so don’t be too alarmed if the checkered hand doesn’t exist or if the hour and minute hands are slightly different. The case, however, will be the same as what you see here and the crowns should be signed. Parts do show up from time to time, but they normally sell very quickly. From what I’ve seen, the movements are top notch and durable. Servicing shouldn’t be too much of an issue. 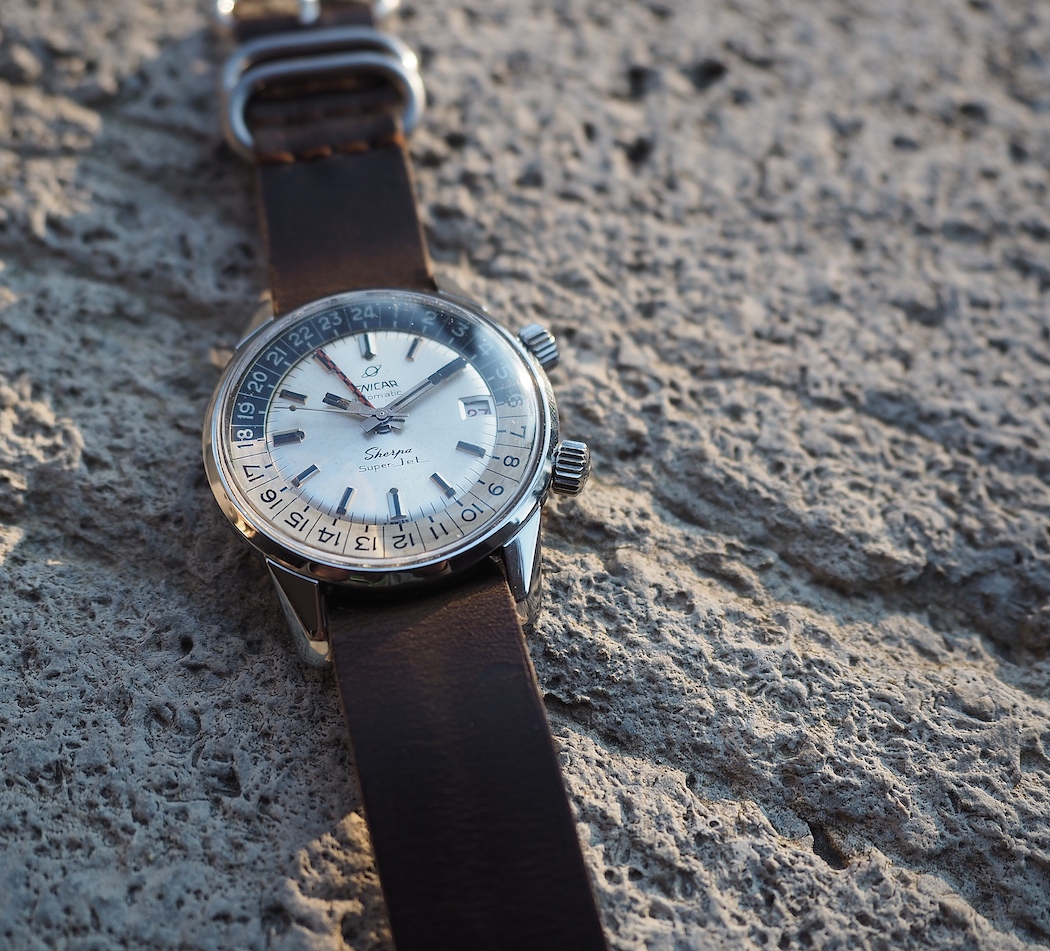 Sculpted lugs on the Enicar Sherpa Super Jet are basically identical to the Enicar, EPSA-cased chronographs of the 1960’s.

If you’ve read #TBT over time, you know that my heart belongs to all things chronograph. This hasn’t changed, but it’s hard to express how impressed I am with the Enicar Sherpa Super Jet. As said, I really enjoy the design of the watch, but I’m over the moon in regard to the case quality. This is such a solid feeling piece that it, and other super compressors, deserves a harder look from collectors. I know that EPSA-cased watches aren’t exactly a secret in the buying world, but if you’ve never held one, you should. Thanks for taking a brief look at a highly attractive watch in the Enicar. As always, feel free to let us know what you think below – until next week…