Anything, but not your ordinary quartz watch
Tomas Rosputinsky
comments 8
Share

Convinced that quartz watches are not worth exploring? Well, they are not all the same. Take this early Q Timex with an M63 movement that combines a quartz crystal and balance wheel to bring us a crazy “hybrid“ watch.

Inside a quartz clock or watch, it is the battery that sends electricity to the quartz crystal through an electronic circuit. The quartz crystal oscillates at a precise frequency. The circuit then counts these vibrations and uses them to generate regular electric pulses. Normally, one per second. That pulse drives a tiny stepping motor that turns the gear wheels responsible for advancing the hands. I don’t know how many quartz watches you disassembled as a child (deliberately or not), hoping you could get them working again, but I’ve butchered a few in my time. And I can tell you for sure that there was no balance wheel lurking among the pieces I found behind the case back. 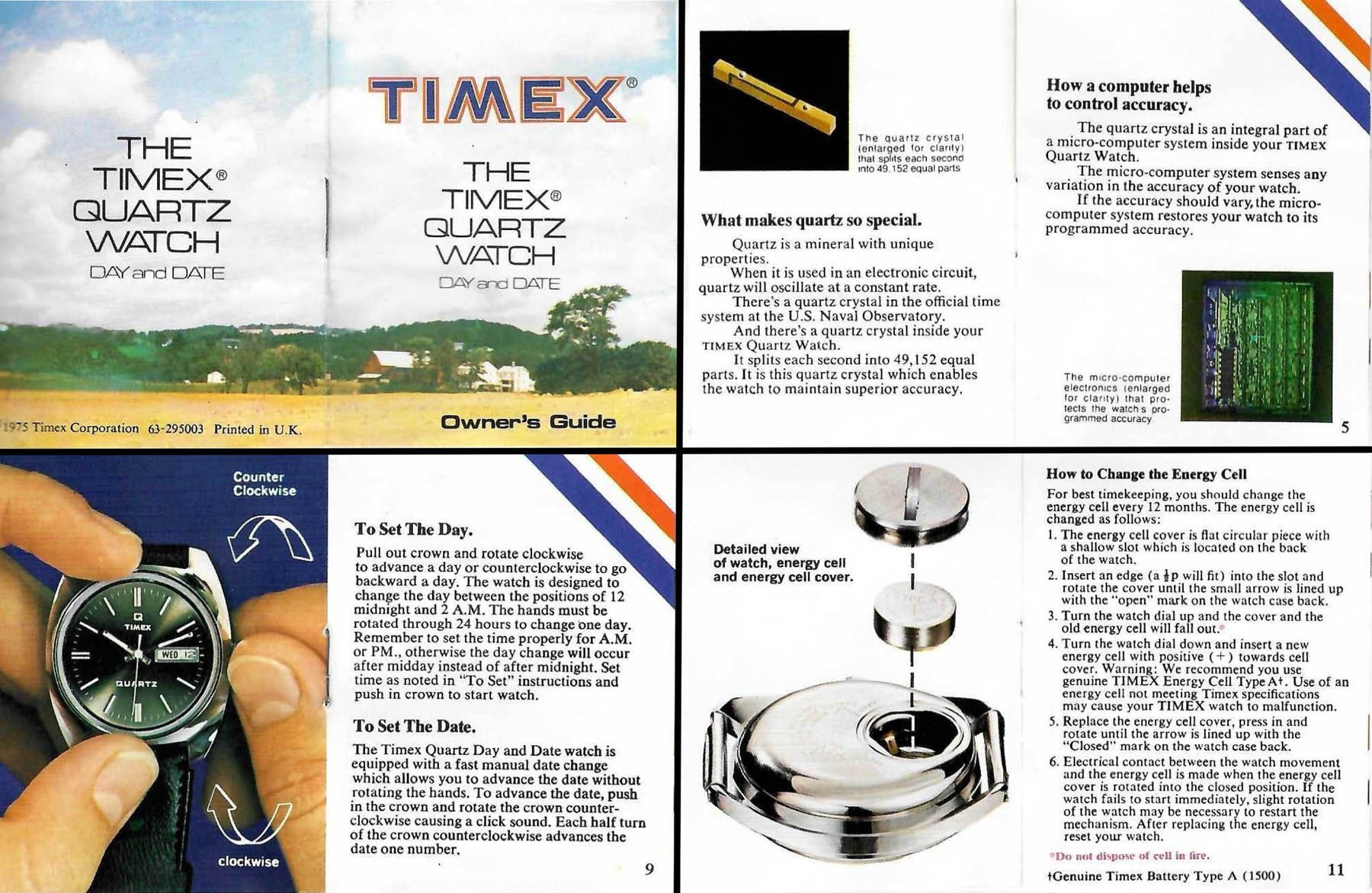 So how come there is a balance wheel in early Timex quartz watches? Some genius R&D minds at Timex took the basic Timex electric movement M40 and made the simplest workaround (un)available in order to hop on the latest trend at the time. Or in other words, to be able to call their watches Quartz. That is something the brand did proudly (and quite extensively), as seen in this copy of an owner’s manual.

It seems bizarre by modern standards, but, at the time, quartz technology was exhilaratingly sci-fi. Consequently, Timex put together a strange arrangement. The movement designers kept the ordinary balance system driving the wheel train. The major difference? The oscillation of the balance wheel was synchronized by pulses from the quartz crystal. One way of having a quartz watch while not really having one at all…

The beauty of the Timex M63

If you wanted to have a full quartz pack back in the 1970s, you needed a stepping motor moving hands. These watches were a very expensive novelty at the time and that was a problem. Timex didn’t want to be expensive. The M63 was introduced around 1972 and it was a genius maneuver that helped Timex fill in the gap between mechanical and later quartz movements. 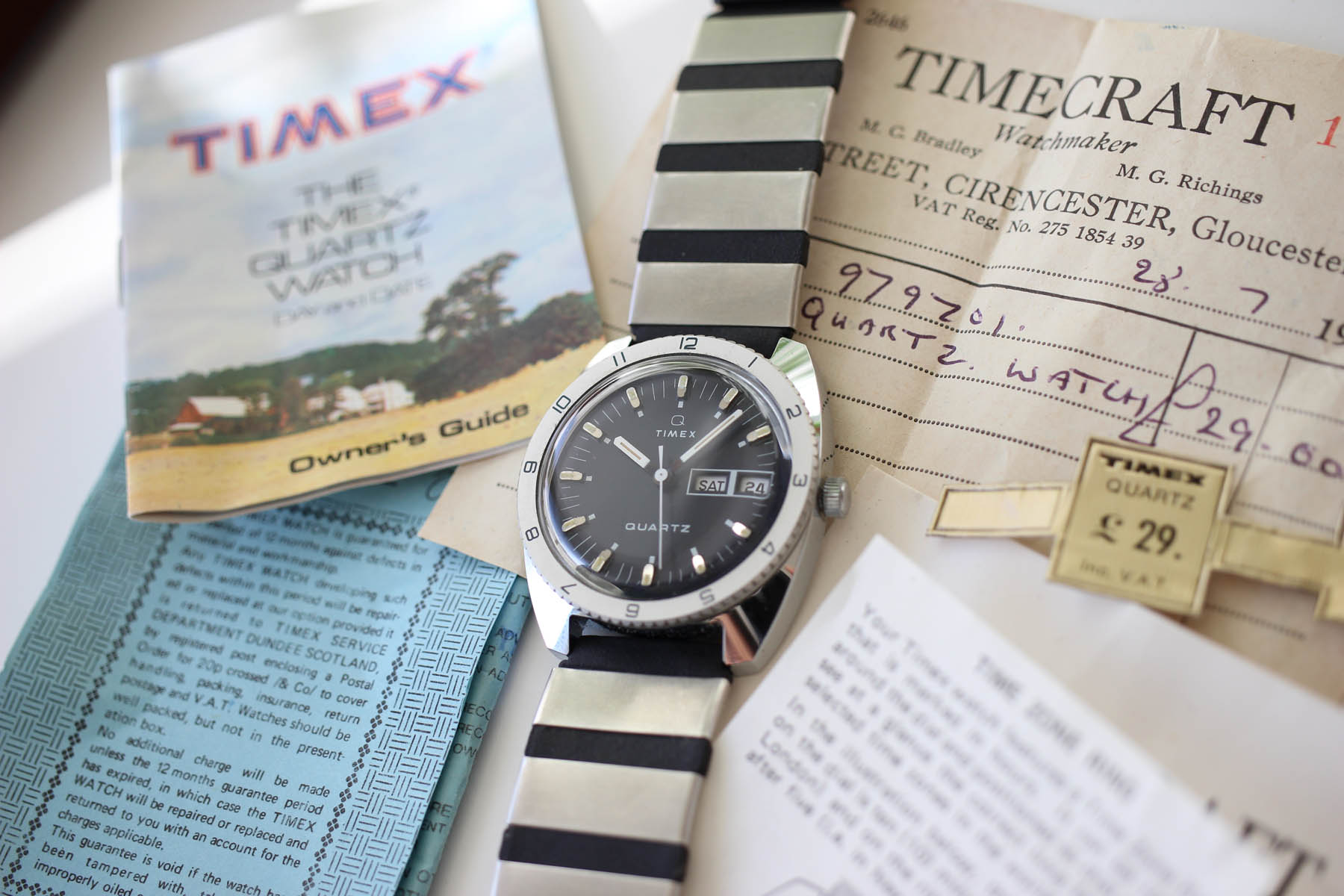 Hold off on the hooray

Do you know why there is no balance wheel in modern quartz? Because a balance wheel means problems. To put a balance wheel in a quartz watch is as tragic a combination as it would be to put spoke wheels on a modern sports car. It would be the opposite of durable. Quartz is highly accurate; a balance wheel is not. The whole vision of quartz is to reduce, or ideally eliminate, bigger and smaller moving parts. Timex kept the most vulnerable parts though. The M63 is a connection of two contradictory principles that were never meant to work together.

The second hand on the Q Timex M63 doesn’t jump like a typical quartz, it sweeps!

Despite the drawbacks, this strange mix makes for one pretty amusing fact for a vintage collector. The high frequency of the quartz crystal is split down to 6 cycles per second and makes the balance vibrate at 21,600 beats per hour. To give the technical description a more romantic interpretation, the second hand on the Q Timex M63 doesn’t jump like a typical quartz, it sweeps! 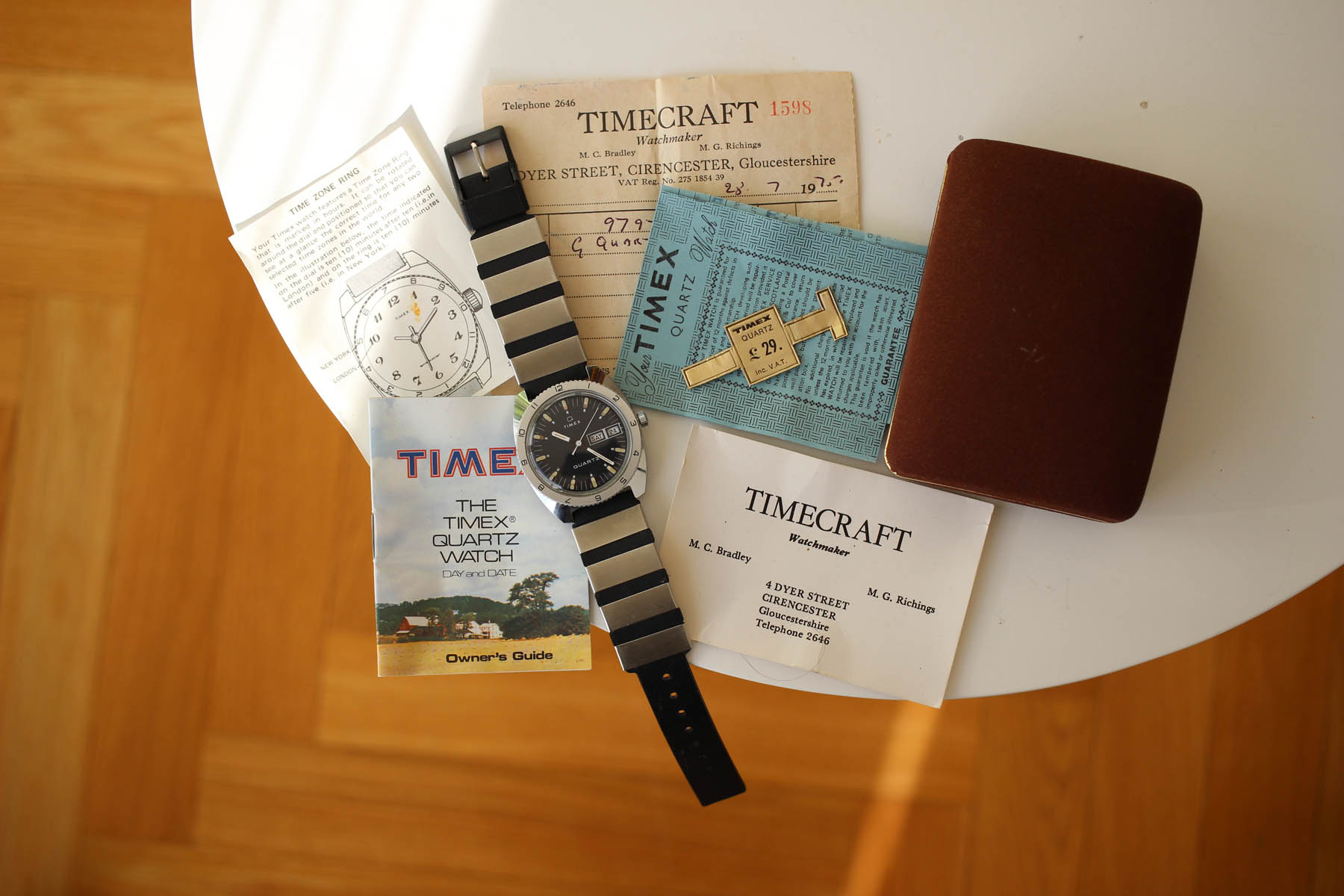 To scroll through all the lots at an online auction pays off big time sometimes. I don’t remember which watch I was after that day. When I looked through the daily offer, this diverse Timex with an original box attracted me. It was in almost mint or NOS condition and it had a lot of documentation included. Despite a micro bidding war, I came out as the lucky winner. I remember the excitement and joy when it came and I was flipping through the original owner manual, guarantee leaflet, dealer’s business card, original receipt, and a few other materials. A full set like you always see and want for your next vintage Rolex. Just delete two or three zeros from the price tag in this instance…

Buying a vintage mechanical Timex without knowing its history is often risky. It’s a paradox that the movement is so simple, almost dull, but not many watchmakers want to service it. Plus, it’s not exactly a bargain to buy a watch for €10 and then go to a watchmaker to have it serviced for €50–€100. It doesn’t make sense when you get a watch worth €30 in the end. If you buy “quartz” and you don’t have a movement shot, it’s even trickier. I didn’t see it before I made a purchase but based on the overall pack condition I hoped it would be fine. Thankfully, there was no battery at all. No leakage or no oxidation. We put in a new battery in and it felt as if I got a brand new watch. 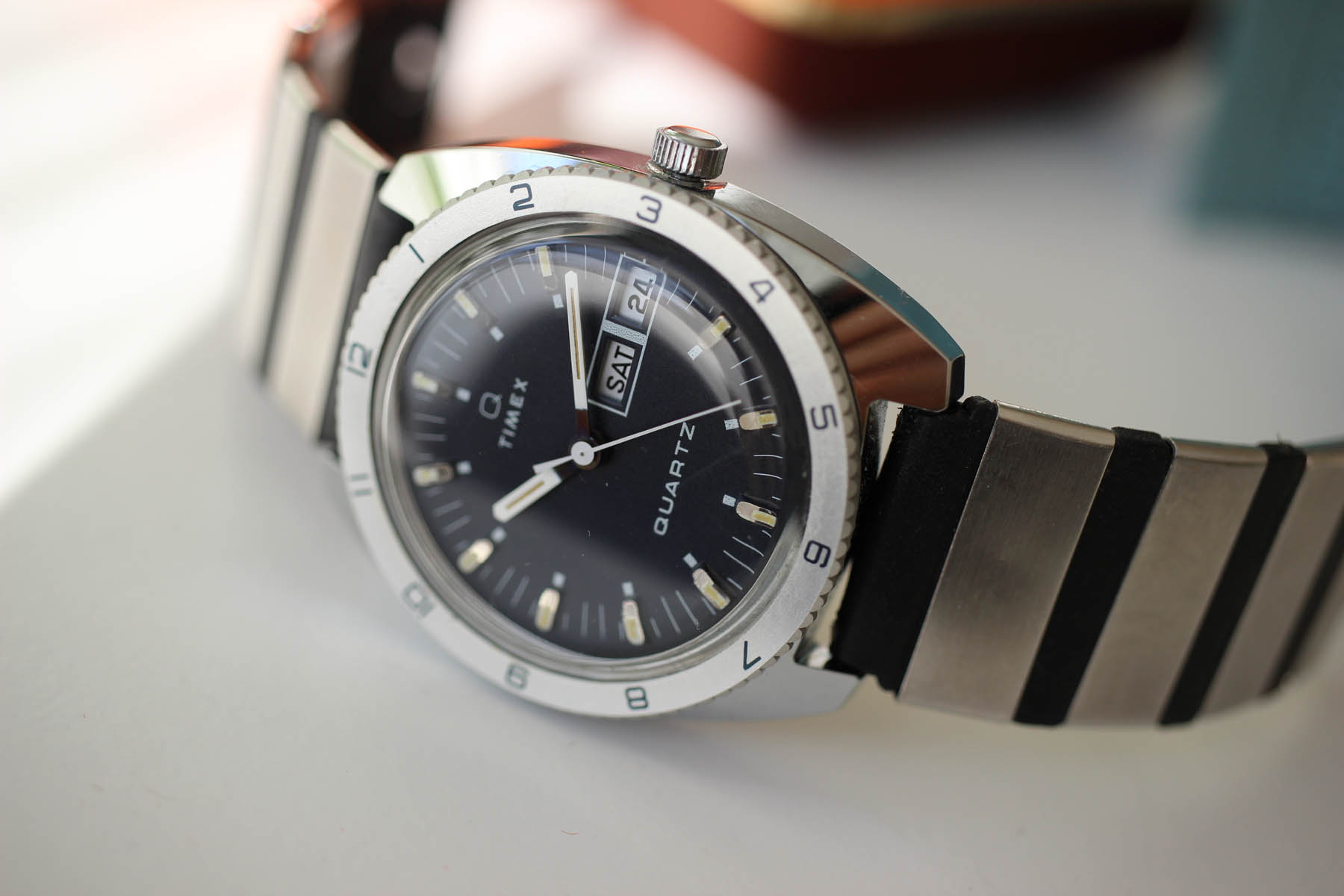 The very 1970s cushion case feels big enough while the thin modern hour bezel adds a sporty look. The non-click bezel operation is something extraordinary. Really, I invite you all to come and try the friction effect. The bezel is easy to rotate, but it doesn’t feel loose at all. It’s precise with no wobble whatsoever. I can‘t find better words than it feels “German precise”. It is one of the best bezel experiences ever. I would never have expected such a quality user experience on a cheap Timex watch.

The black dial is quite simple but full of details. The applied indexes have a rounded touch. With an extra square printed next to it, they look like 12 exclamation marks. The hands are basic but have a nicely aged lume. The printing quality could be better, but imperfections are not visible in plain sight. Notice the quartz sign. It’s almost double the size of the Q Timex logo. It’s hard to imagine today, but it only underlines how much of a big deal quartz was back in the day. 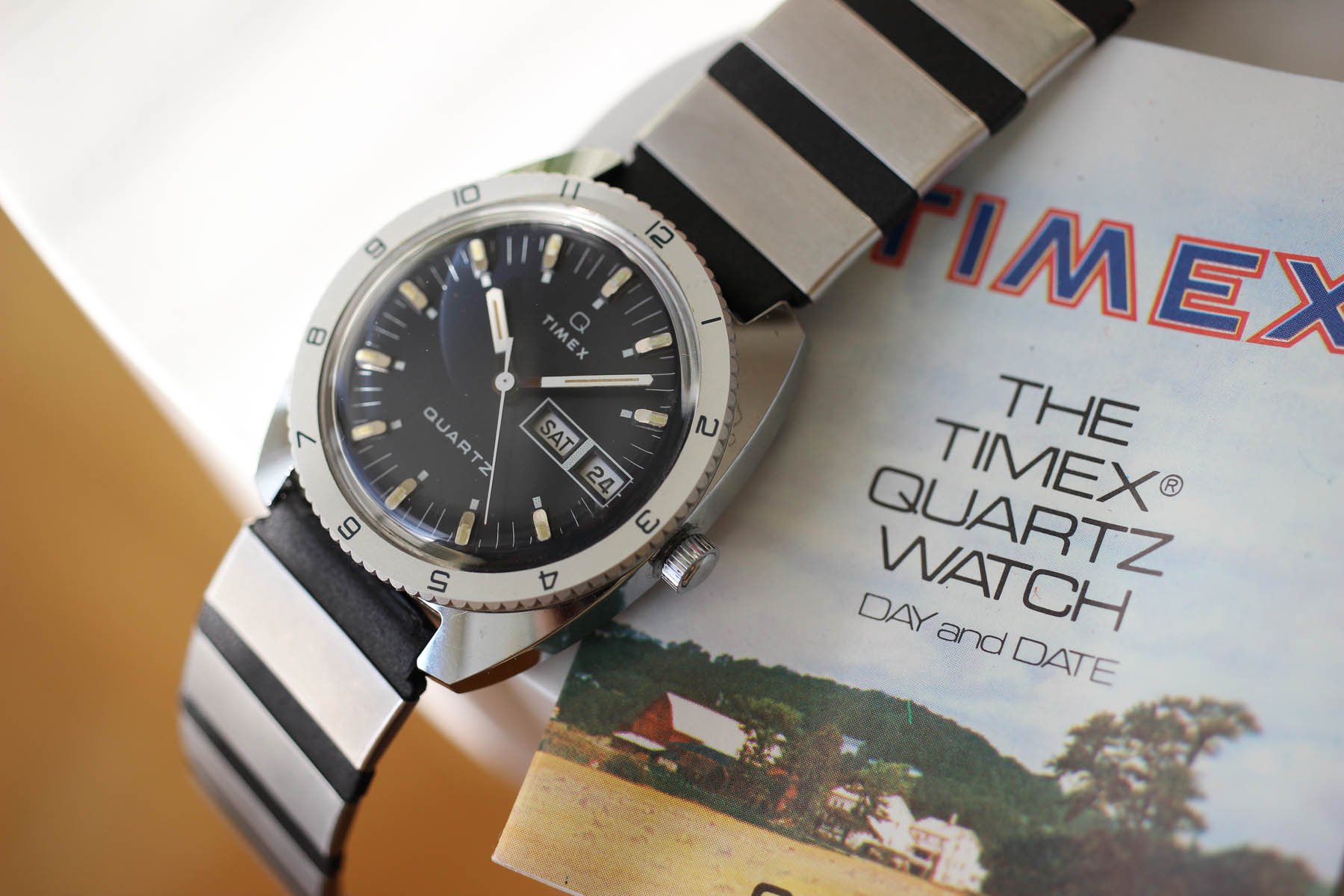 When I saw the strap in the auction listing, I had strong doubts about its originality. I was actually sure it would turn out to be some aftermarket punk junk. Just look at that rubber shape loaded with eight steel stripes. Only after I saw the buckle and Mod. Dep. Pat. Inscriptions on the inner side of each metal rib did I start to believe it’s something. And it really is. I found a B&W print ad from August 1975 that shows the same type. My Q Timex M63 was purchased on July 28th, 1975 in Gloucestershire, UK. The receipt and the big-format catalog shot suggests that this Timex ref. might be 979.701.

As silly as the strap may seem, I tried it out even became fond of it. It’s comfortable and honestly, I don’t think care what others think about my watches and how they look. I can’t get the diving DNA out of my head when I look at it. The original manual tries to persuade me it withstands water pressure up to 80 feet below sea level. I don’t plan on testing it out. But I did test the M63 movement’s day date update. There is a quick set for date change, but you have to rotate the hands through 24 hours to advance the day. It is a cool enough feature anyway. 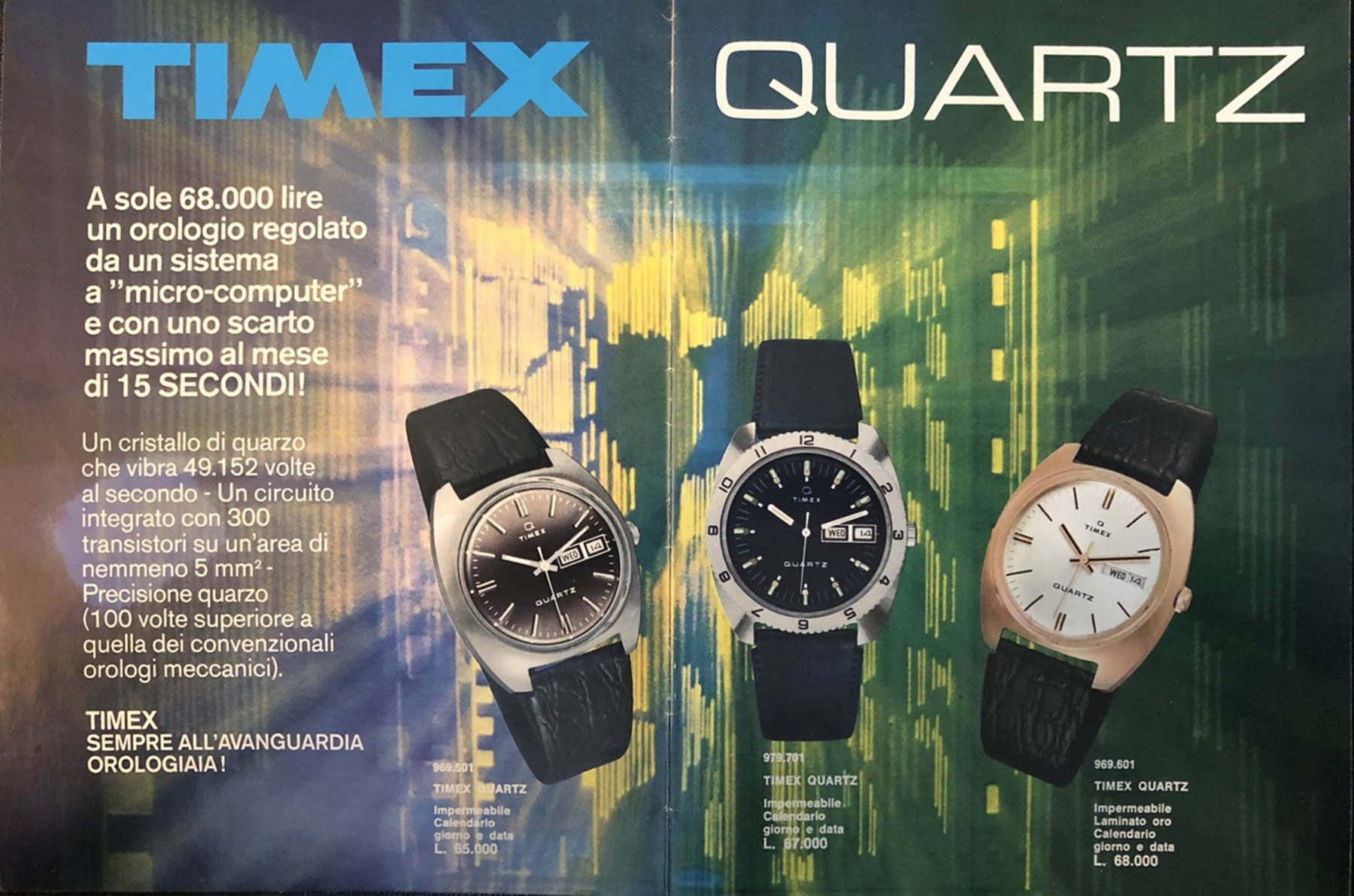 I am really happy I pulled the trigger even though I had had no idea what I was buying at that time. We mostly hunt vintage watches we know nearly everything about. Sometimes we hunt intel about vintage watches we don’t know anything about. We buy them because we like them. Timex merged two seemingly incompatible ideas and created something that looks pretty ridiculous but is also quite poetic today. #TBT’s mission is to reveal more such stories. Happy hunting.