First off, I’d be remiss if I didn’t wish you, our readers, a Happy New Year. With a new year comes an entire 366 days, Blaise informed me of the leap year, of excitement and uncertainty. Regarding the vintage market, we can’t predict what will occur in 2016, but it’s likely that things will remain hot. Therefore, we’ll continue to try and scope out value in a market increasingly devoid of both deals and supply. Today’s subject meets that criteria and despite its case color, I think you’ll end up liking it. We’ll talk about a watch and a brand that we haven’t discussed on #TBT or Fratello Watches to my knowledge. It’s icy cold out there in many areas (that oddly warm Christmas is now seemingly in the distant past), so make sure your chokes are out and the carbs are being flooded when you’re firing up those props. Imagery aside, let’s take a look at the aviation-inspired Jardur 850 Chronograph. 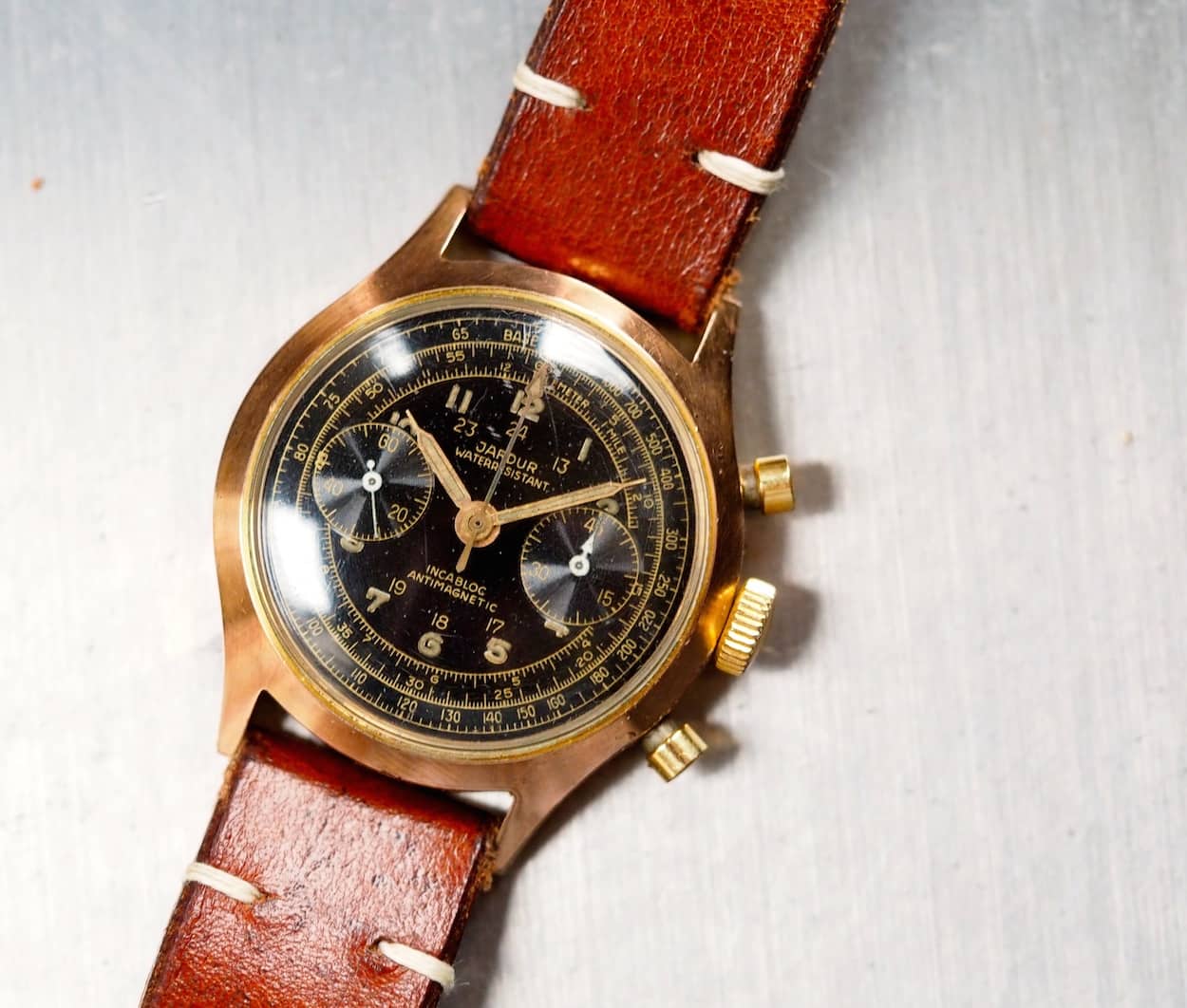 The Jardur 850 is really an attractive chronograph – rose gold plated case and all!

Gold again…it had better be worthwhile!

Well, this will be the second time I’ve reviewed a gold-toned watch on #TBT; the first time was a review of the beautiful Vulcain Triple-Date chronograph. If you’re already disappointed, try to hang with me because I think this piece is pretty compelling. So, what’s a Jardur anyhow? Well, the company was actually the name of a NYC-based aviation instruments company that was owned by two brothers. Under the name of Jardur, they imported various technical items including chronographs from Switzerland from the 1930’s to the 1950’s. Their most famous watch was and is the Valjoux 71/72 powered Bezelmeter (your author would love to track one down 😉 ) that featured a revolving outer bezel to help time missions. In fact, American WW2 pilots often used these useful chronographs. (For more background, don’t hesitate to visit the history page on the revised Jardur website.) However, Jardur also made other chronograph models. 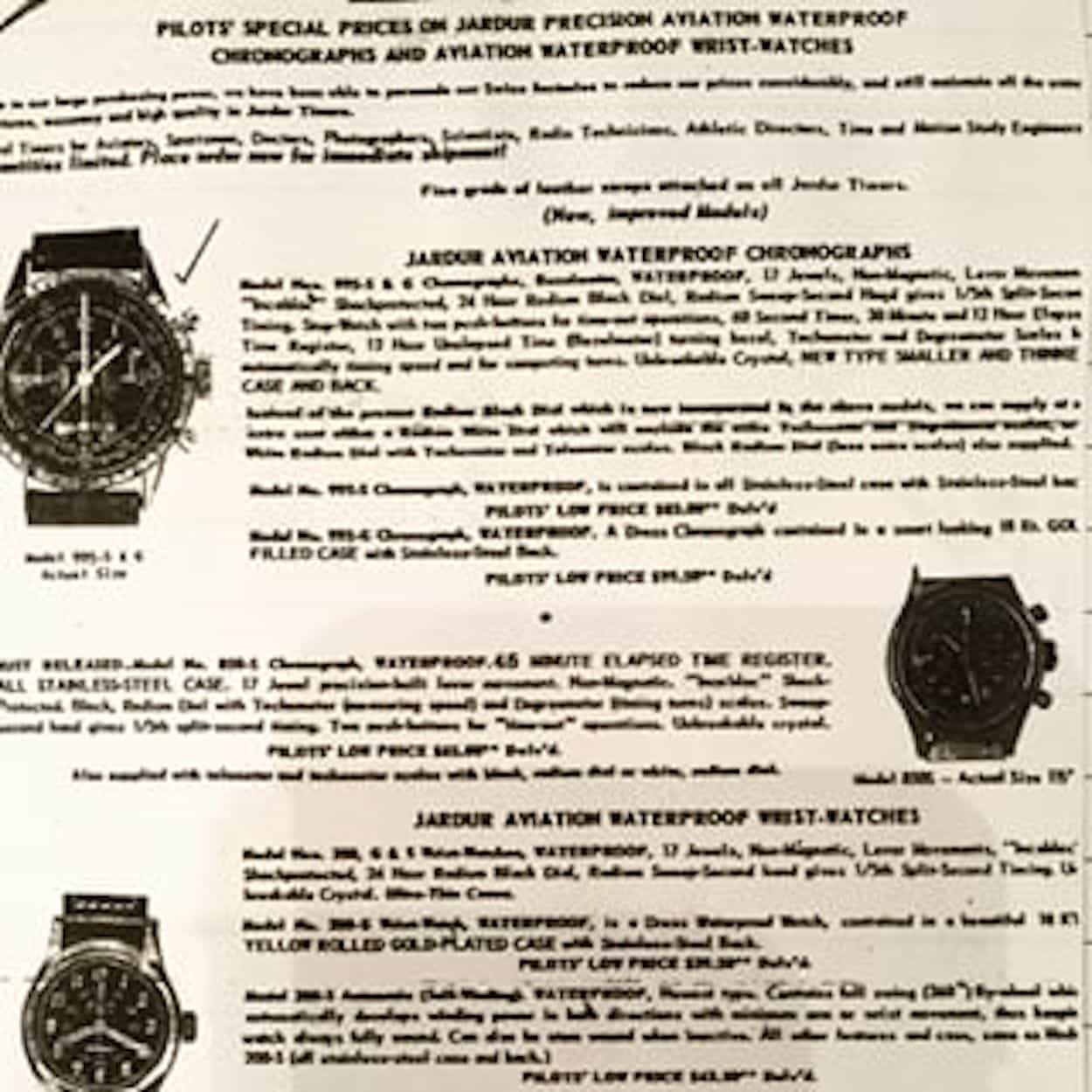 Not easily read, but an original advertisement showing the Jardur Bezelmeter up top, our featured Jardur 850 (in steel) in the middle and a 3-hand watch at the bottom. (Photo credit: Jardur.com)

The Jardur 850…an introduction

The model of focus today doesn’t have the fame of the Bezelmeter, but I still think it’s a great looking watch. The Jardur 850, and thanks to the revitalized Jardur for posting the above advertisement on Instagram so that I could find the name of this piece, is a Landeron 48-equipped manual wind chronograph with a 45 minute counter on the right register and a running seconds counter on the left. If you recall the #TBT that we published on the Nivada Datomaster late last year, then Landeron rings a bell. The 48 is really the “godfather” of all Landeron movements and scratched the world’s itch to time many things in the 1930’s to 1940’s with relatively inexpensive, easy to produce cam-switched chronograph movements. (A great little discussion on Landeron’s history may be found here.) To say it’s stout and easy to work on is an understatement, so for all of you who have concerns about future service bills, this could be your watch! From a functionality standpoint, the Jardur uses Landeron’s trademark “start” with the top pusher and “stop/reset” from with the bottom pusher. It’s a really nice movement from a user experience, but how does the watch look? 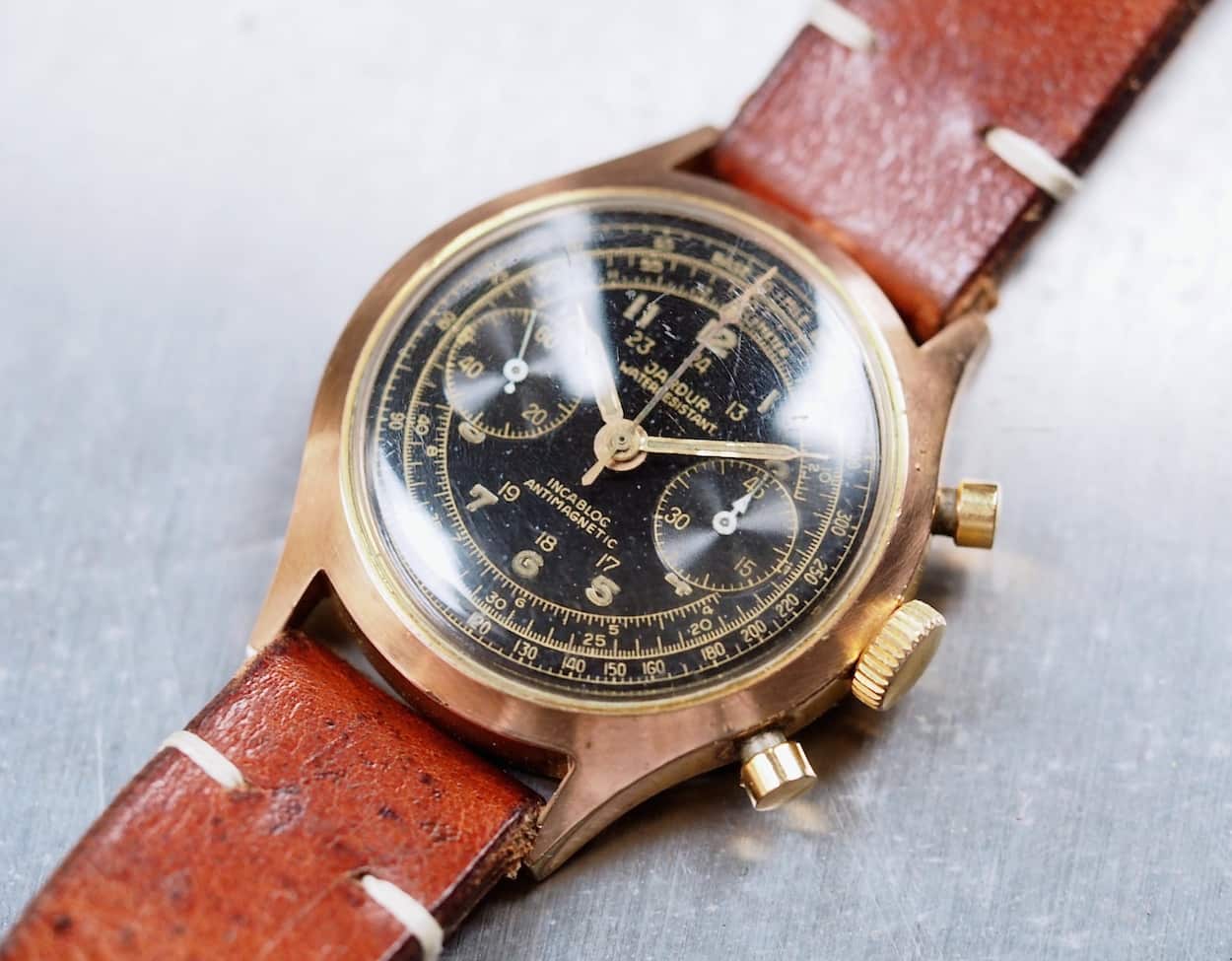 What a lovely case on the Jardur 850!

Ok, so I must admit that I am slowly warming up to gold, but if I’m buying the color – because, yes, this is plated – and I have a choice, I really like rose gold. Well, I was in luck because this version of the Jardur 850 is in the reddish hue. As an aside, and per the advertisement, stainless was offered and I see a yellow version, although re-plated but likely original color-wise, on gregoriades.com.   In any case, the rose gold color attracted me, so when I saw the watch on eBay, I made an offer and it was soon on the way. When I opened it, I was rather impressed. Sure, the case color looks good on the watch, but the case itself is the real star. First off, the Jardur 850 is pretty big for what is likely a late 1940’s, early 1950’s chronograph. It rings in at an impressive 38mm that looks a heck of a lot chunkier in person due to thick sides, lugs and “bezel”. 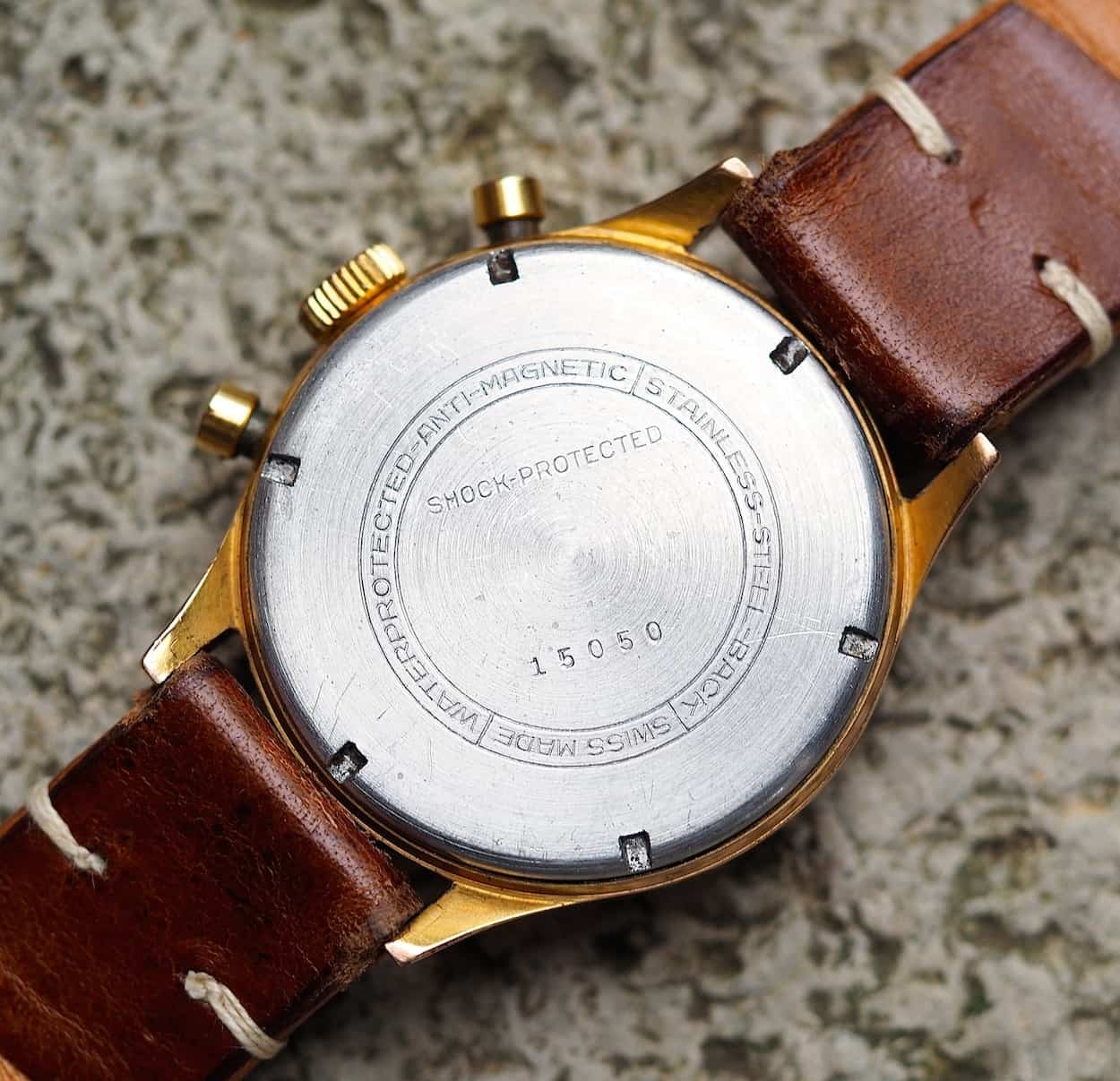 I refer to the bezel as the topside of the watch, but the case is really one piece aside from its stainless screw-down case back. The case has what I’d call a monobloc look that led to a commenter on my Instagram feed surmising that it could be made by famed casemaker Borgel who made early screw-down waterproof cases for companies such as Patek Philippe. This is possible and if anyone knows any more detail, we’d love to hear! 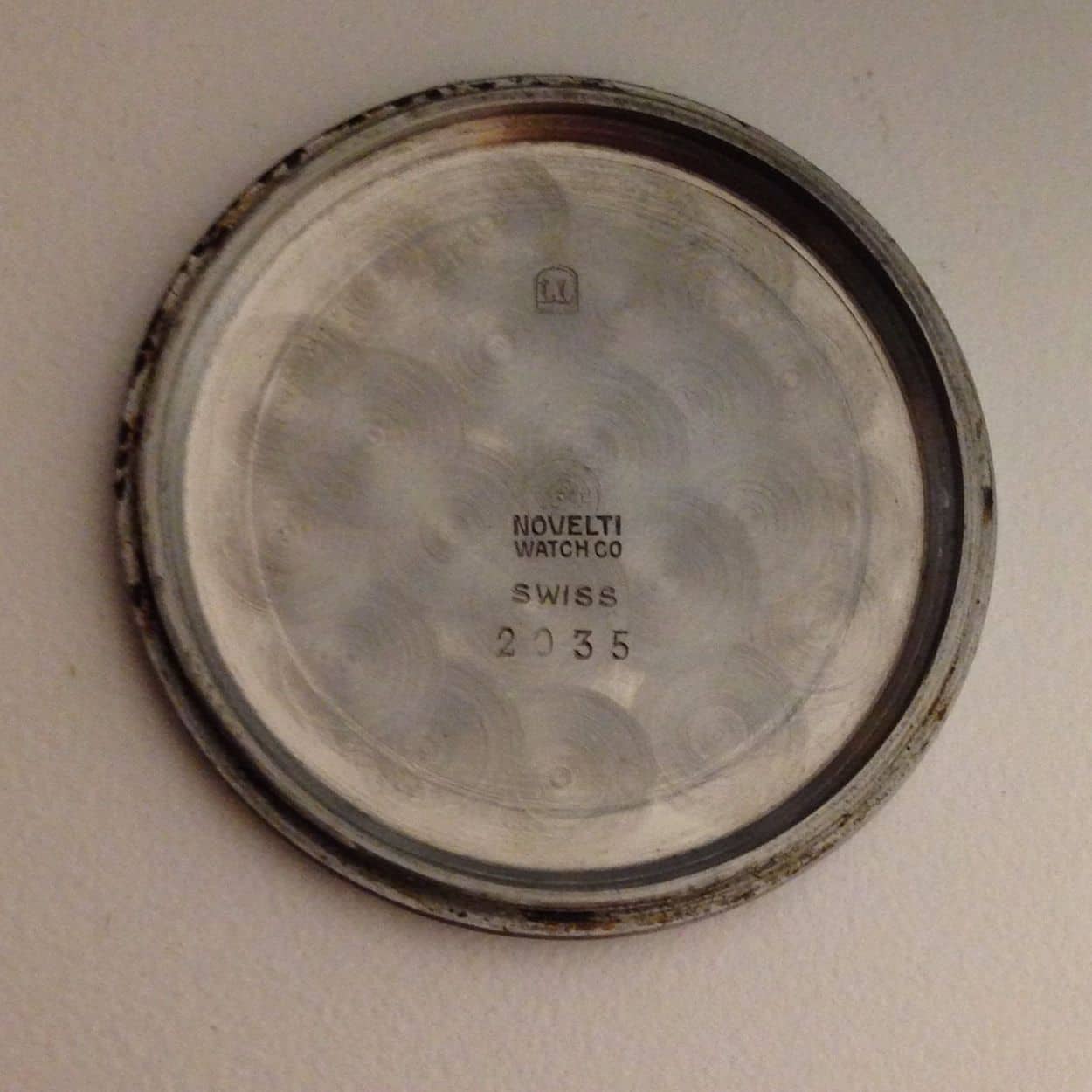 A look at the stainless case back of the Jardur 850 shows that it was made by Novelti Watch Co in La Chaux, Switzerland (Photo credit: eBay seller)

A look inside the caseback shows that the watch was actually made by Novelti Watch Co. @watchfred helped to unravel this company and it seems they were part of a large Swiss company by the name of Levaillant. Either way, it’s a beautifully simple case that still looks modern today. Oh, and a 19mm lug width helps to add some size to the overall look as well. Also, you’ll note that there is a small bit of plating loss at the corners of the lugs. Here is where rose gold is of real benefit because it closely matches the base metal case material. So, perhaps it’s better than chrome. 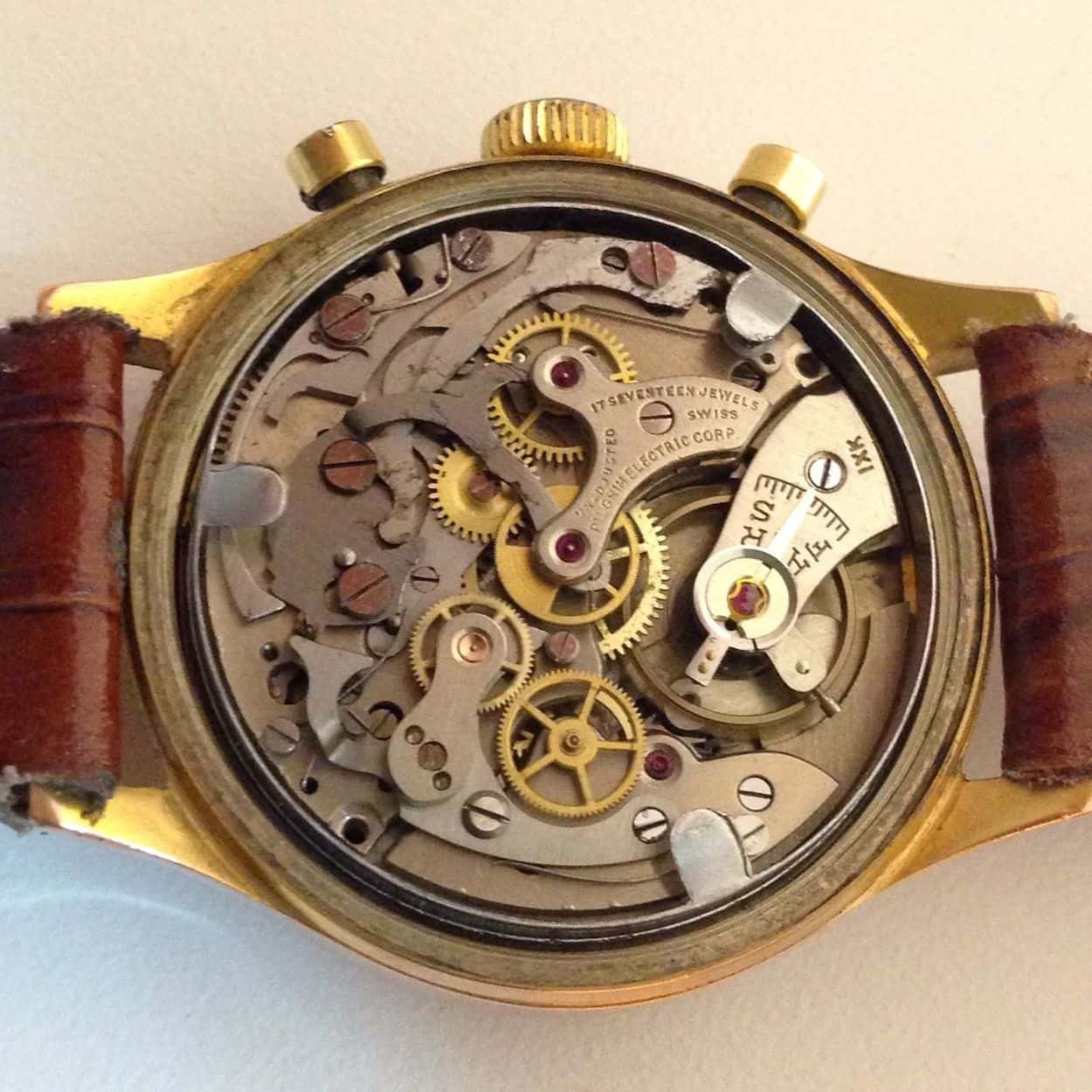 The Landeron 48 movement inside the Jardur 850 (Photo credit: eBay seller)

By the way, while we’ve removed the case back, let’s return to the Landeron 48 in the Jardur 850. If you take a view of the bridge, you’ll see that the watch has been signed “Pilgrim Electric Corp.”. Well, that sounds a bit odd and it also sounds rather American. Still, whatever it sounds like to you, it certainly doesn’t sound like “Jardur” does it? Well, we can thank the good folks at Jardur again because they cleared up what was a fairly longstanding mystery. Apparently, Jardur was the name of the import company while Pilgrim Electric Corp. was actually the name of the company.   Confusing? Well, importation of goods was, and to some degree still is, a tricky business so names and country-specific entities were often created to help escape the taxman. Still, it’s interesting to wonder about a watch branded as “Pilgrim” – perhaps John Wayne would have made a great spokesman!

As always…it’s all in the details

Getting back to the looks department, everything attached to the Jardur 850 case has good heft and size. While it’s possible that the crown is a replacement, it’s large and very utile – especially for a pilot with gloves. Likewise, the pushers are of a nice size and function with a nice click. Finally, the crystal is a thick, domed aperture that appears to be original. Just look at that lovely crazing and, no, I’m not going to change it! 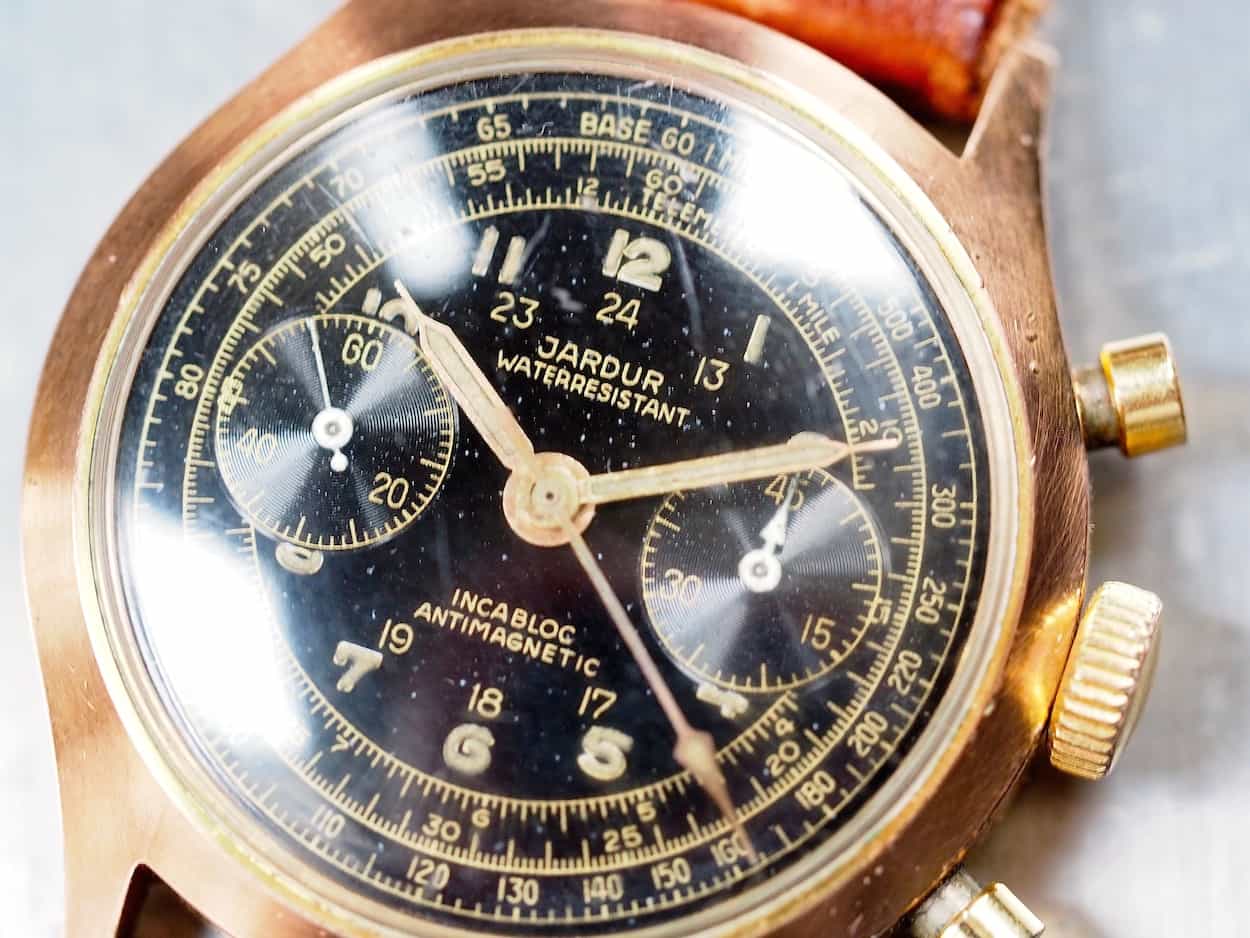 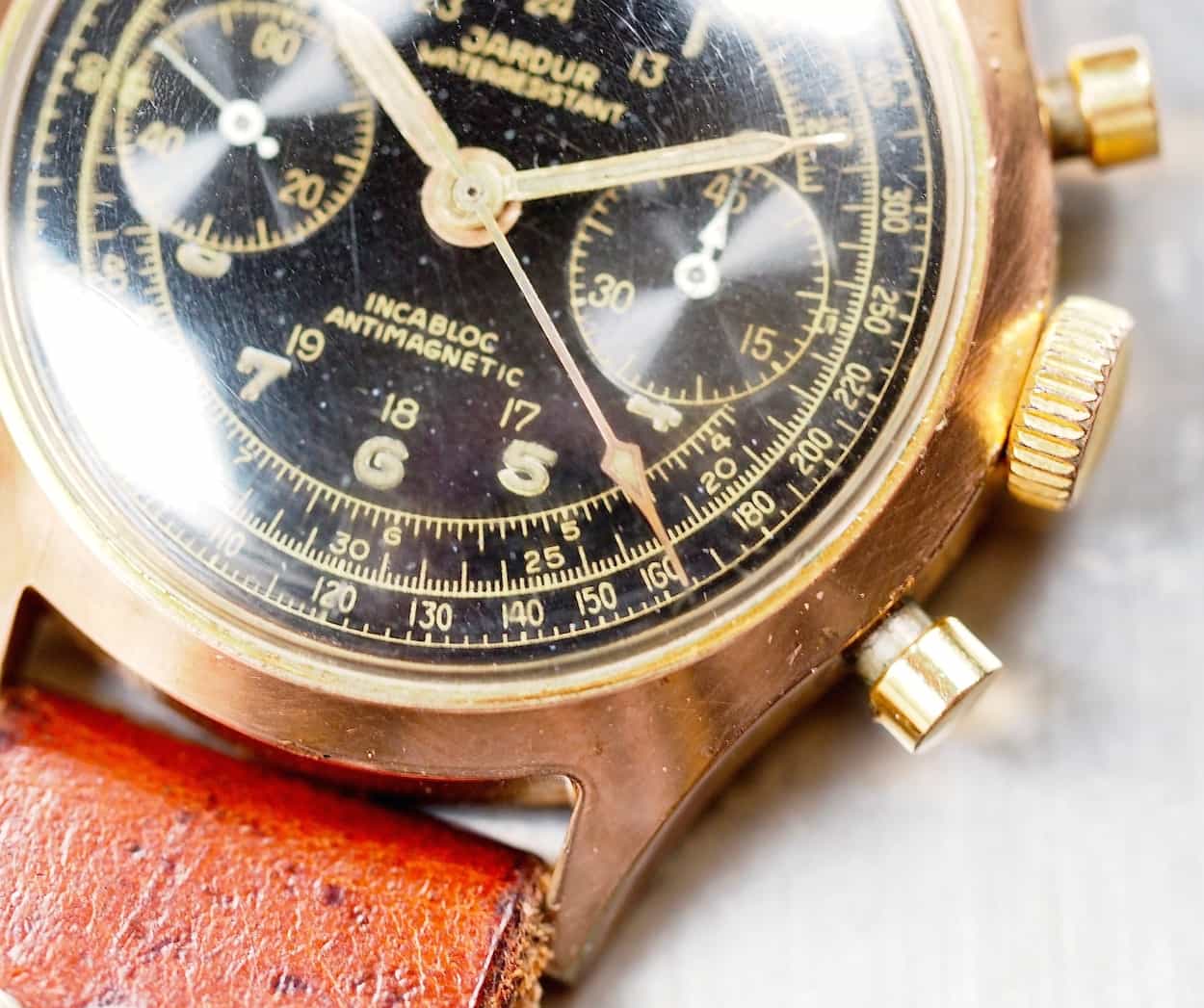 The details found on the gilt dial of the Jardur 850 are fantastic. The central chronograph hand employs a style familiar to Speedmaster fans.

Inside the scales, there are radium applied hour markers. Inside these are gilt 24-hour markers. Surface-wise, the dial only changes when we come to the sub registers as they feature typical close-ridged concentric circles. The hands on the Jardur are radium-filled and syringe-shaped. Interestingly, the central chrono hand is very similar to pre-moon Omega Speedmasters with its lume-filled arrow tip and paddle tail. 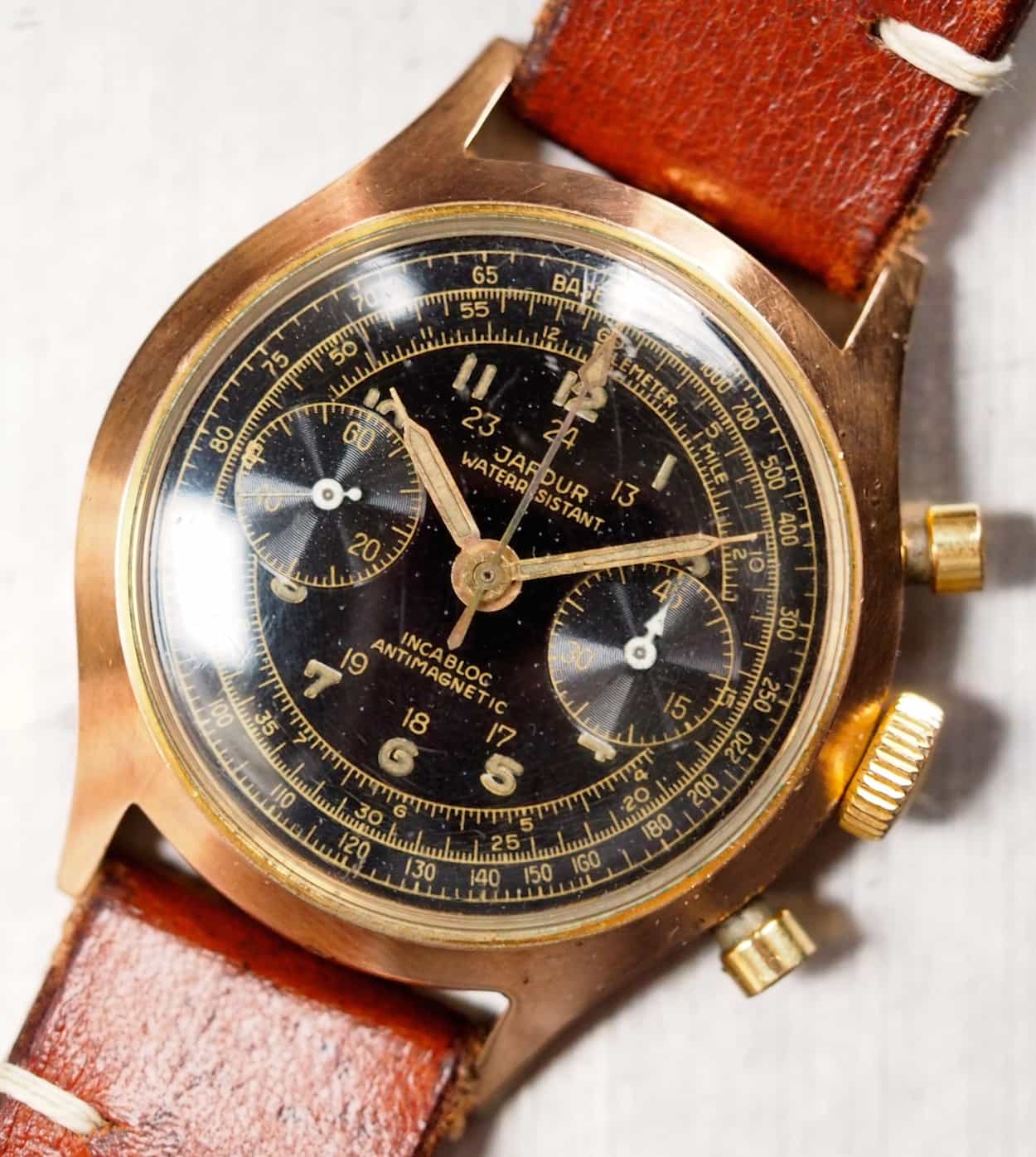 The subregister hands are actually done in white to stand out and are in the same shape as our recently reviewed Heuer Bund – meaning that the 45-minute register hand is arrow-shaped while the running seconds is needle-like. It’s interesting that this style of sub register hands was kept similar over many watch brands for so many years. 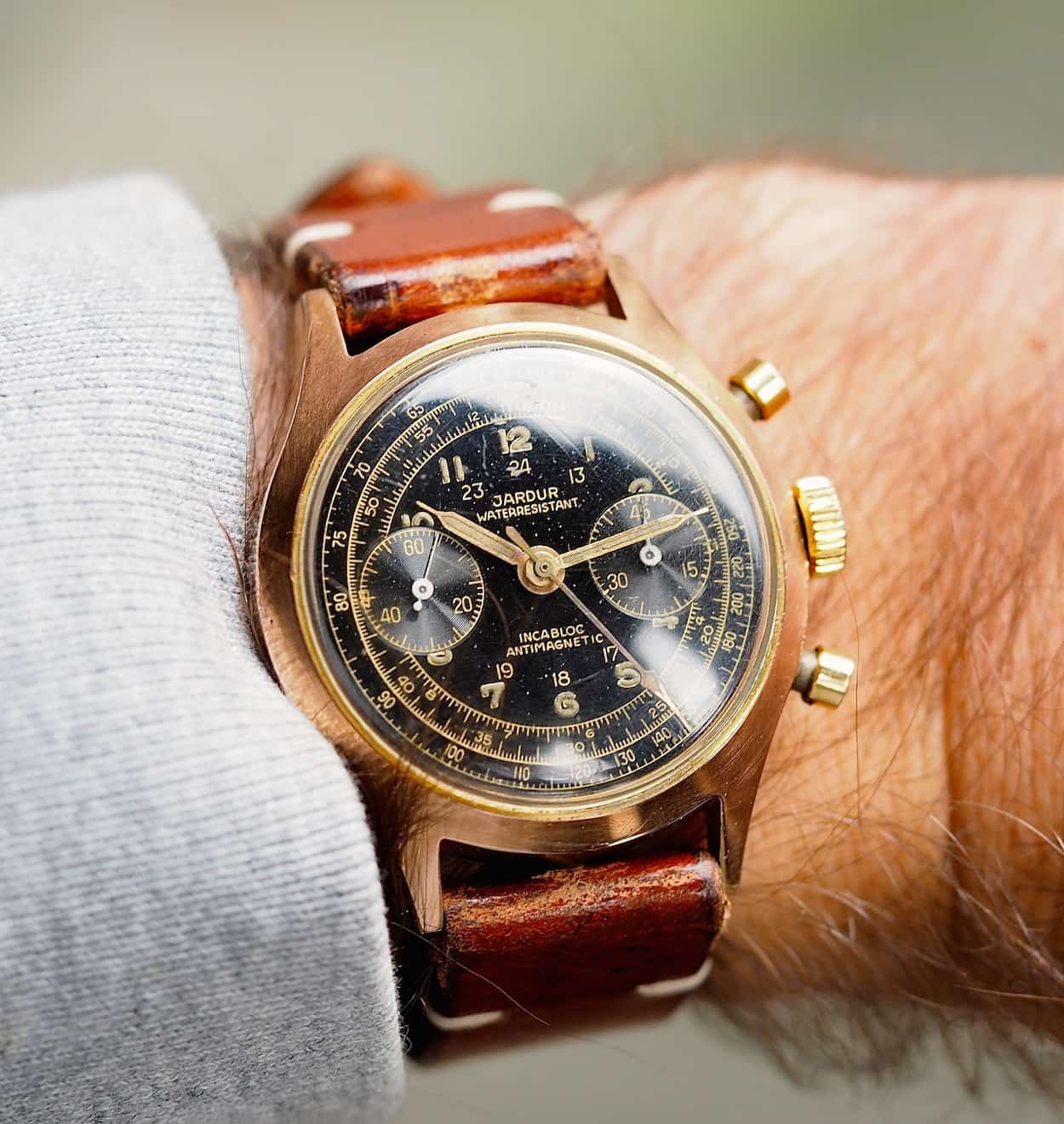 The Jardur 850 looks wonderful on the wrist

For an old watch, the Jardur 850 wears very “today”

As you can tell, I’m pretty impressed with the Jardur 850, but how is it to wear? Well, as you can imagine, with a fat case and bold looks, this chronograph looks great. It was shipped to me on a “not terrible” brown lizard skin strap, but I decided that the watch needed something a bit more rugged and appropriate. I chose to pair it with a great strap from MJLeather made from a vintage Swiss ammo pouch. Personally, I think it fits the watch perfectly and I think I’ve found a permanent pairing. Suede, even a distressed rally strap or a NATO with gold hardware would look good on this watch. Lizard skin would likely dress it up and with the gold color, why not? 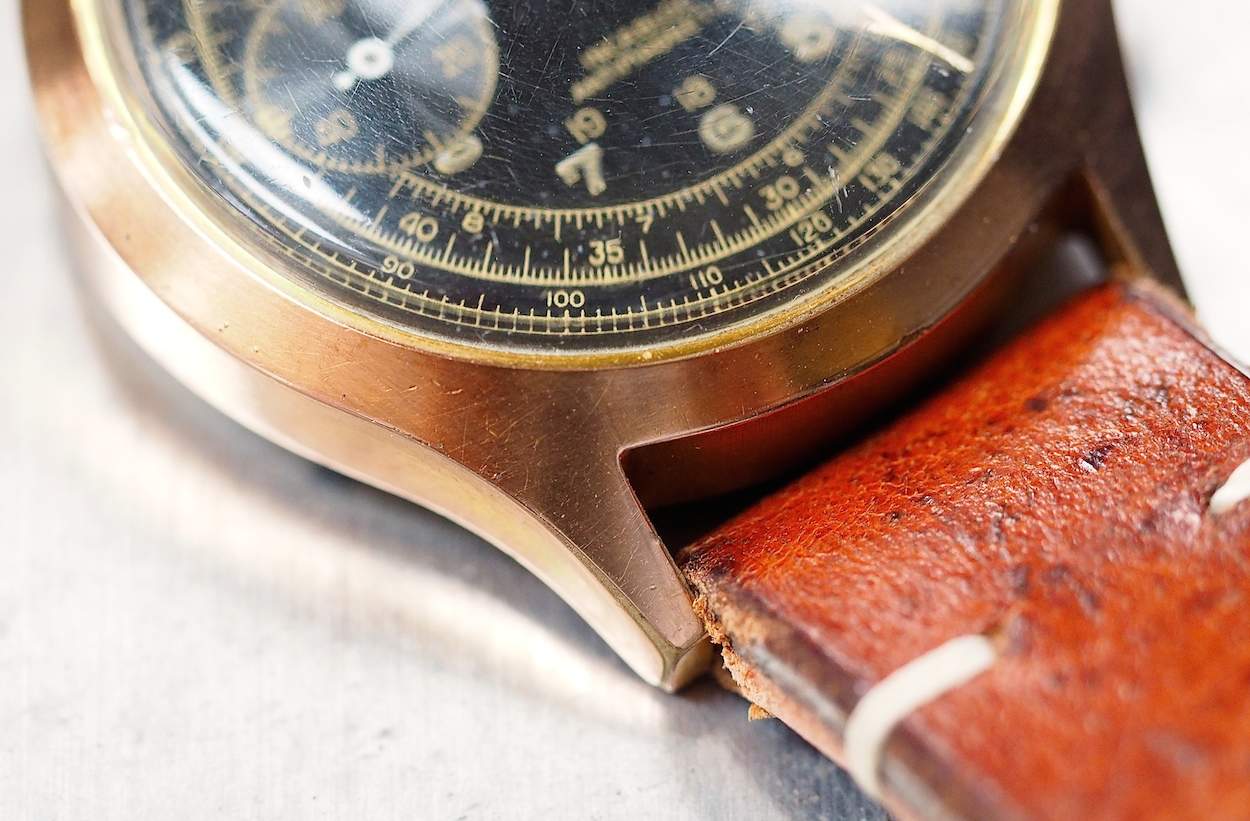 Wear on a plated case is always a concern, but with a rose gold finish, it’s very similar in tone to the base metal underneath

The Jardur 850 is a deal…those do still exist

The Jardur 850 shows up now and again on places such as eBay. As mentioned, these are easy watches to service and finding things like replacement crystals shouldn’t serve as too difficult. The biggest issues on the plated cases are, naturally, the plating. I’d also guess that finding cosmetic parts is a tough task as well. Value-wise, I’d guess that stainless commands the most value, but most pieces I’ve seen are gold plated. Pricing seems to be all over the map nd ranges from roughly $500 to over $1,000. 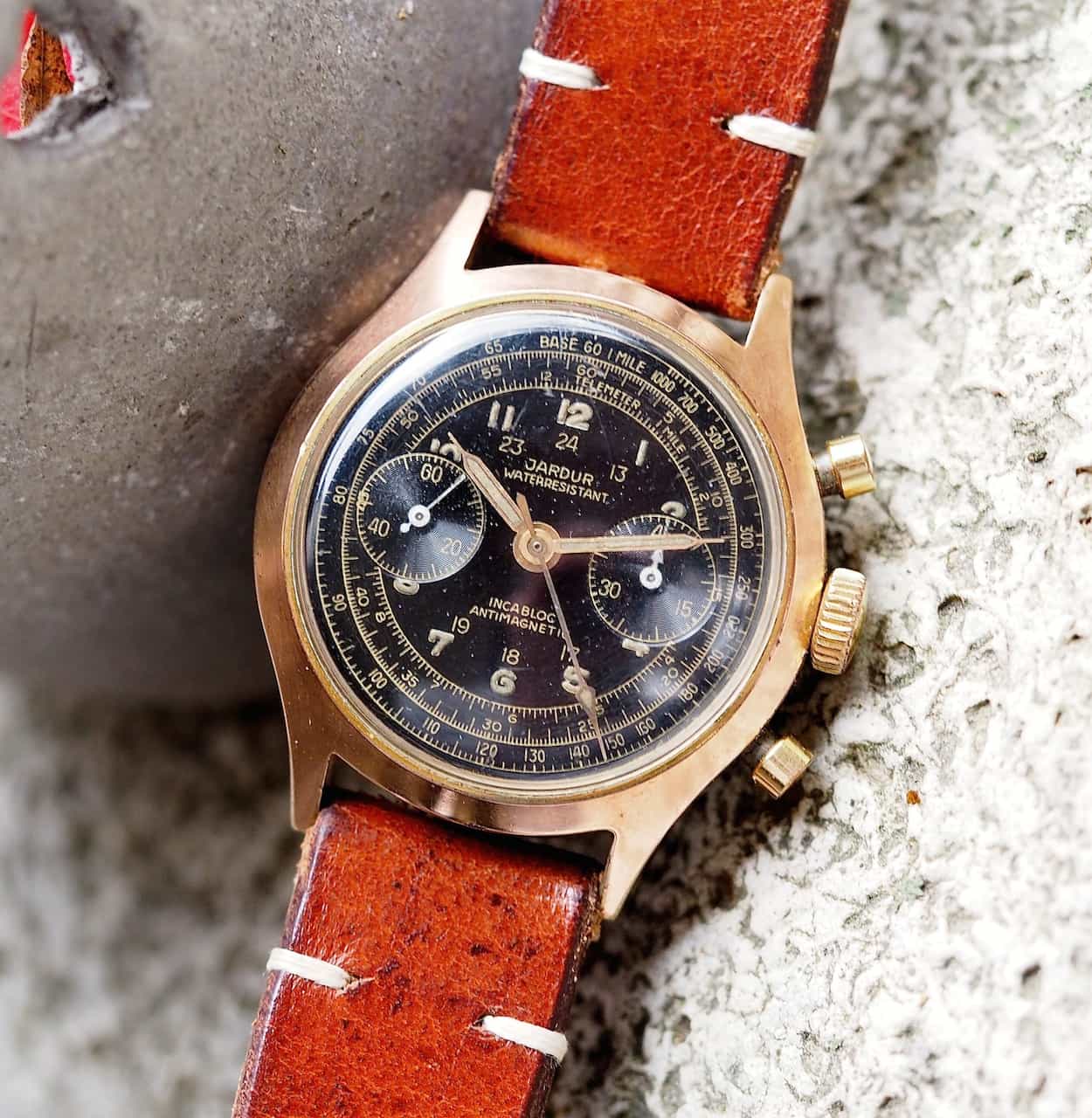 A robust movement, 19mm lugs, a 38mm case diameter along with a seemingly durable finish…what’s not to like on the Jardur 850?

I probably don’t need to tell you that watch brands with real history and high quality don’t typically sell so cheaply. Frankly, I’ve bought plenty of watches for more than the Jardur 850 that don’t have the presence or underlying build quality of this piece, so consider it a rare deal in today’s hot market. Furthermore, the Jardur has a wonderfully attractive design and a highly robust movement (I have no idea when –or if – mine was last serviced and it keeps amazing time). I hope you found this week’s #TBT interesting. We spoke about a brand that has a rather dedicated cult-like following, but it doesn’t receive a ton of press. If you own a Jardur, feel free to chime in and tell us about it in the comments below.

Wear on a plated case is always a concern, but with a rose gold finish, it’s very similar in tone to the base metal underneath

Look at the crazing on the crystal…love it!

The Jardur 850 looks wonderful on the wrist

A robust movement, 19mm lugs, a 38mm case diameter along with a seemingly durable finish…what’s not to like on the Jardur 850?

The details found on the gilt dial of the Jardur 850 are fantastic. The central chronograph hand employs a style familiar to Speedmaster fans.

The Jardur 850 is really an attractive chronograph – rose gold plated case and all!

The Landeron 48 movement inside the Jardur 850 (Photo credit: eBay seller)

A look at the stainless case back of the Jardur 850 shows that it was made by Novelti Watch Co in La Chaux, Switzerland (Photo credit: eBay seller)