An instant love. Since I first saw it in an old advert, I wanted to get my hands on it. It took some time, patience, and fine-tuning, but here it is. Since I landed and tried Seiko A829-6029 for the first time, I believed it was designed for my wrist. Nothing fancy. Just a true tool watch. But do not underestimate it! And not to forget, we are almost the same “production“ year…

It’s hard to believe that it will be almost ten years since Robert Jan first shared his finds about one of the “other“ watches that went into space. Seiko A829-6019 with blue/red bezel was worn in space not only by Dutch astronaut Wubbo Ockels, but many others during their missions in the 1980s. What makes this decent and often overlooked reference really appealing to me, is the fact that so-called Seiko Astronaut made it to space mostly thanks to the “personal” choices made by the astronauts themselves. 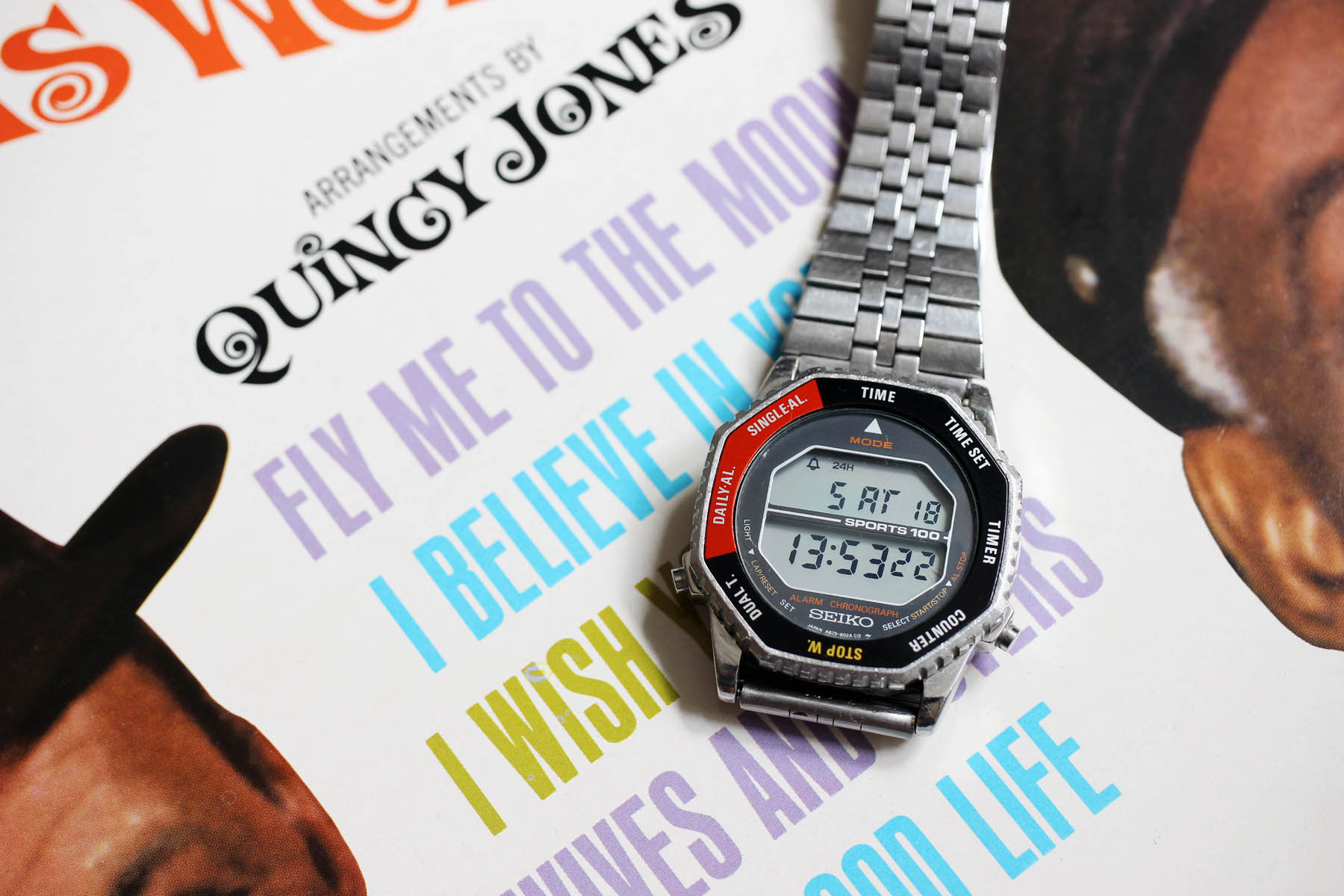 My relationship with this watch — its genesis, at least — reminds me of how important it is to diversify our exposure. It is easy to find oneself stranded in an echo chamber on Instagram or Facebook when we’ve followed many similar accounts. Of course, we have our interests. But in order to grow, giving new ideas their day in the sun is always worthwhile. And beyond our social media accounts, wonderful new (or old) watches can be found with a bit of creative googling. That’s how I stumbled across this piece — searching for vintage watch ads.

Why so much excitement?

Rotocall was never a factory name or model name. It’s just a very succinct example of ’80s advertising genius. It wasn’t a widely used term and it didn’t really catch on. Google search results for “rotocall” are sparse. It’s an awesome nickname for an awesome watch that conjures just the right kind of character to mind. Thinking about all the nicknames like the Pogue, the Monster, the Tuna, the Sumo, or the Willard, I see Rotocall as another nickname to be brought to spotlight. 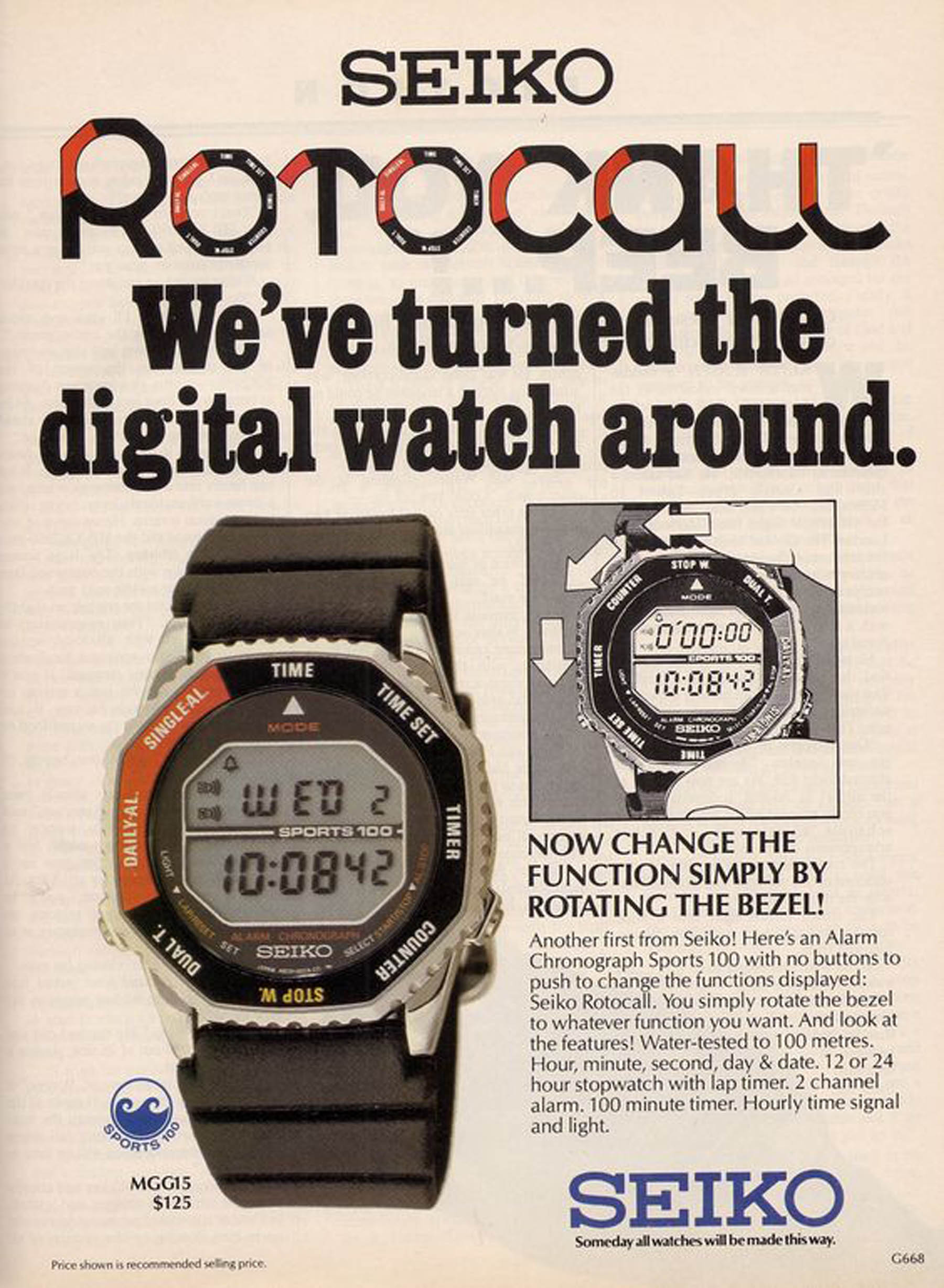 As explained in an ad, the idea is pretty simple. You don’t need to push any button to change the functions displayed. As the illustration shows, by simple bezel rotation, you switch between functions. It might sound like a boring minor change, but I have to tell you it’s a big thing. While usually, you need to fiddle around with your finger to find the button to press, here you just grab the thing and do it. It feels almost like shifting gear on a race car.

I will vouch for Seiko A829-6029 for a few reasons. Visually the combination of black/red is more interesting than blue/red. If you want to play the “personal preference“ argument, think of Pepsi vs. Coke Rolex GMT Master. The first one mentioned is well known, hence beloved, but the other one is definitely unusual and more eye-catching for seasoned collectors. 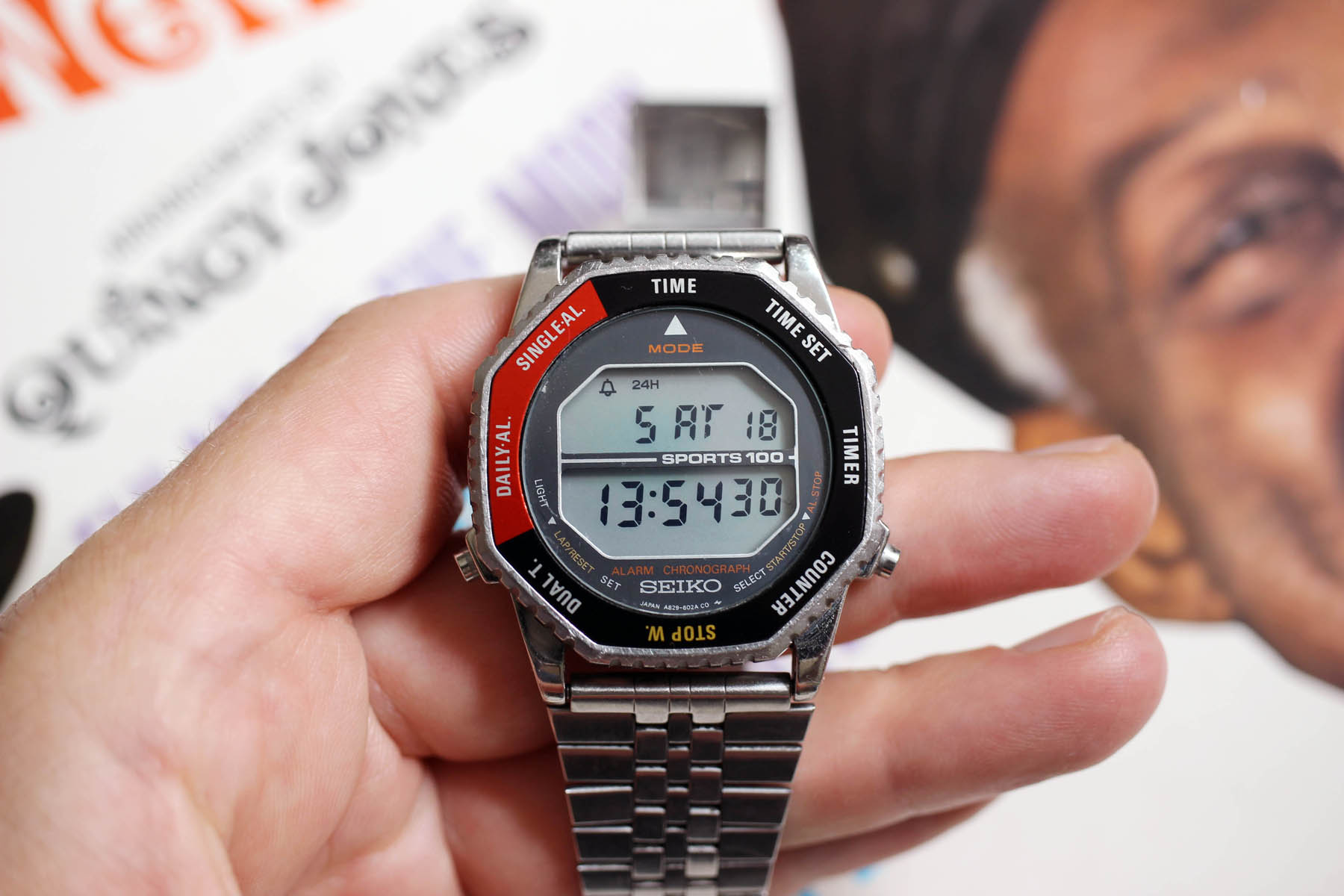 When I said that I lean towards A829-6029, the bezel shape is the primary reason. Not only does it look more novel, but it also works much better than bezel on Seiko A829-6019. Look at the picture where they sit next to each other. The blue/red option doesn’t have cut-outs for better grip all around the edge. Half the bezel edge on the Seiko A829-6019 is flat and polished, while A829-6029 has evenly spaced notches all around the bezel side. Rotating the bezel and switching functions on Seiko Rotocall is much faster and more precise. I remember the blue/red Astronaut driving me nuts a few times… 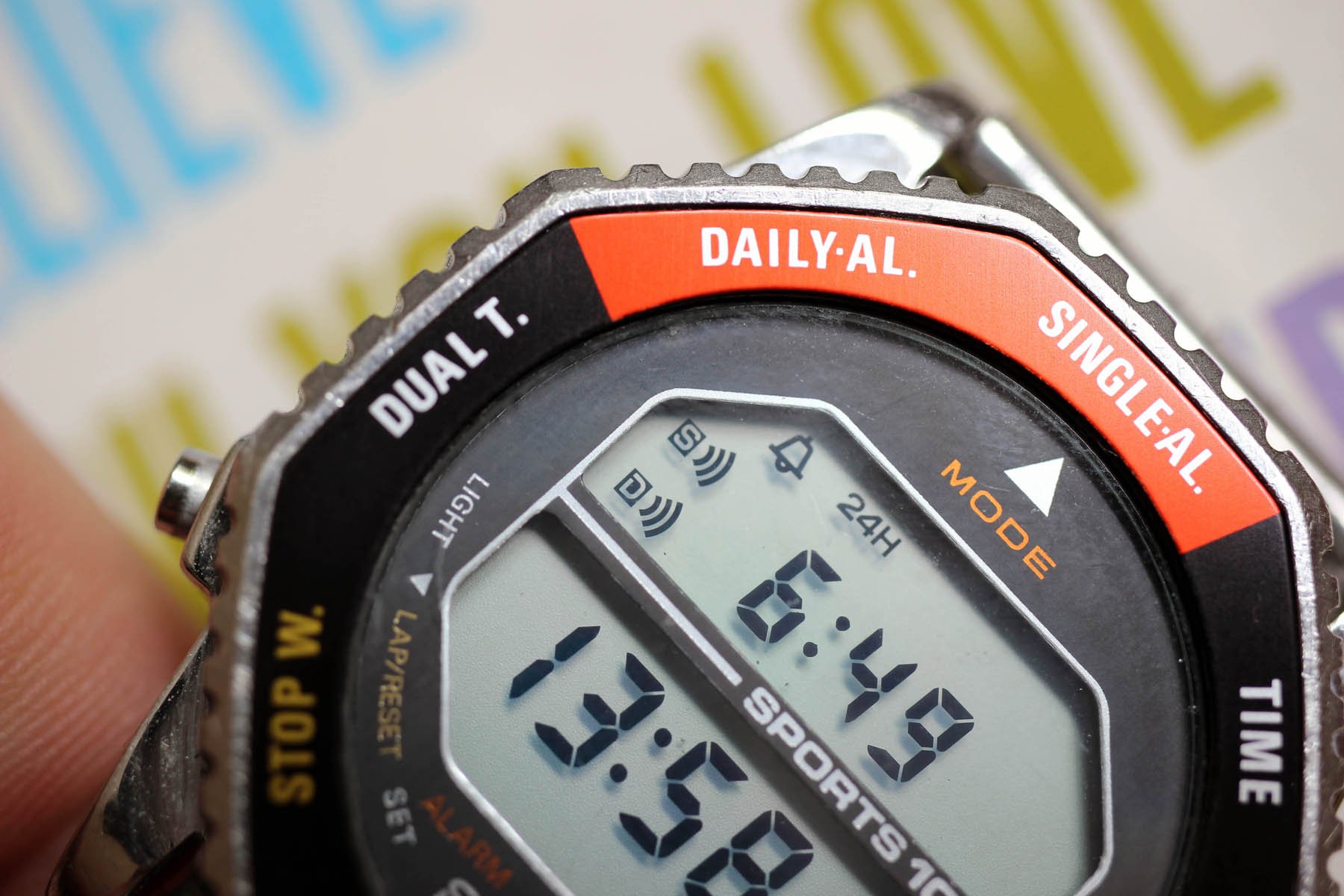 Why the ode to bezel rotation? Seiko Rotocall reminds me of how cool digital quartz watches can be. One rotation into another position and you have a duo of parallel counters, each operated by a respective button. Dual time — perfect for checking the time in another time zone, so you won’t wake up your colleagues working from other parts of globe. The single alarm and daily alarm functions are highlighted with a red background on the bezel insert. I have to admit that I surprised even myself with how often I had found a use for the Rotocall. Get ready to rotate a lot! 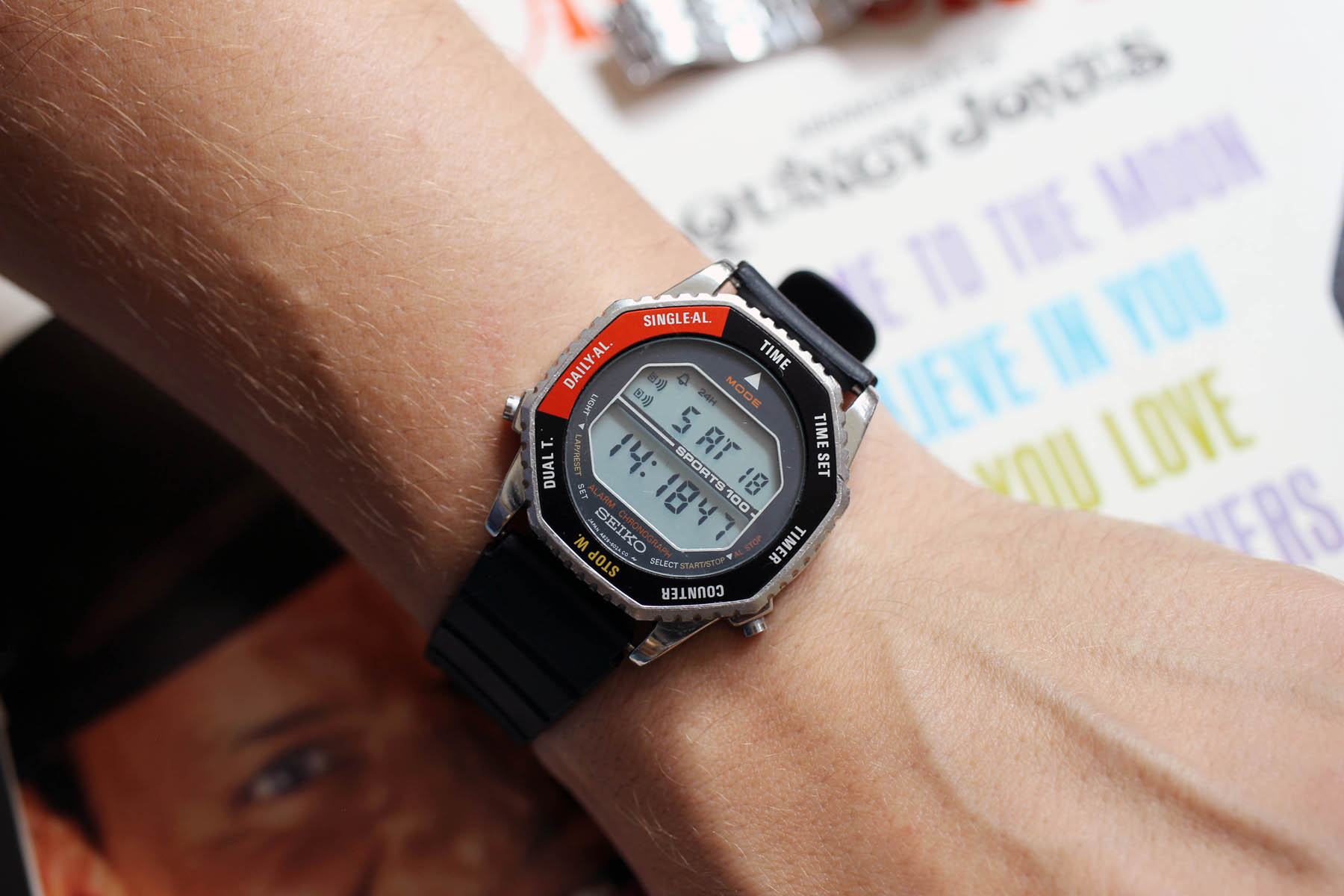 The Seiko Rotocall is fun to wear. It’s 37mm in diameter and 9mm thick, but it wears super-light even on a metal bracelet. Flat lugs integrate into a quite thin watch case, which leaves plenty of space for the bezel to shine. The bezel should touch the case tightly. If you consider buying a Rotocall, don’t forget to ask for a short video of the bezel in operation to make sure everything is in order.

I have bought three Seiko Astronauts. Not a single one worked as described. And I believed I was buying it from honest owners. Perhaps they were well-intentioned, but their descriptions and answers to my questions were sloppy or inaccurate and their knowledge of its history found wanting. That’s why the request for a demonstration video is essential. Also, focus on the bezel insert. About 90% of them are heavily worn, but, worse still, they often peel off. There is no mechanical system or latch holding them to the bezel, they are just glued.

While you might pay a premium for “ghost“ bezel on your next Rolex Submariner, here it gets you a big discount. I am not a fan of faded bezels on any watch — not even big-budget model — here it looks really, really bad. The style just doesn’t suit this kind of wear and tear. And this is me saying this. I love patination, remember? Anyway, if you need original Seiko replacement bezel insert, McCaw Company still has few spare. One of them already sits on my Rotocall. 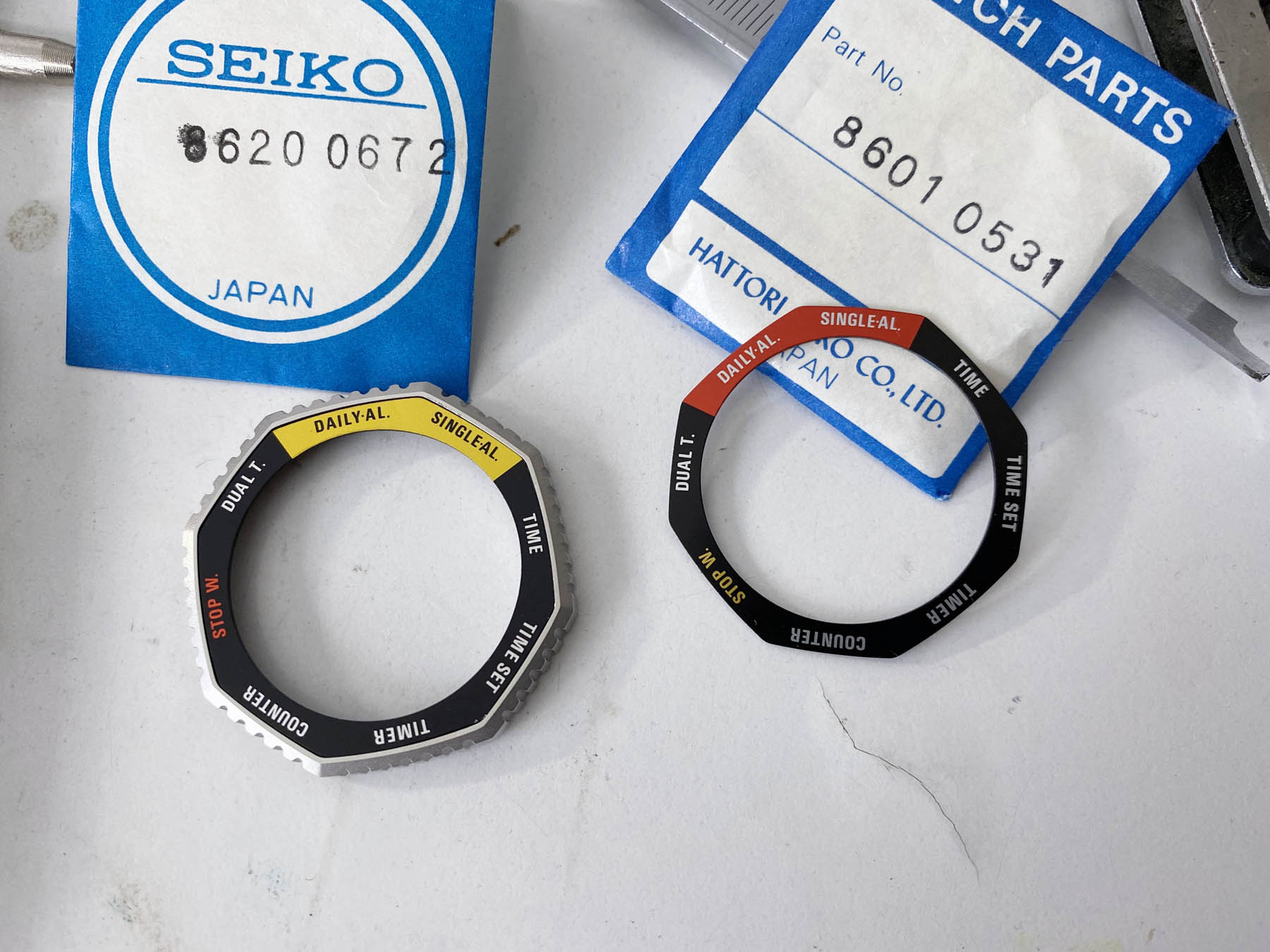 The Seiko Astronaut A829-6029 or Seiko Rotocall is officially part of the Alarm Chronograph Sports 100 range, which refers to the watch’s being tested to 100m. Obviously, they passed at the time although I probably wouldn’t be so confident about taking one of these 300 feet beneath the surface today.

The bezel rotates bi-directionally, not just one way, as shown in the illustration. It seems that while the blue/red model came on a bracelet, the Rotocall was fitted to a black rubber strap as standard. 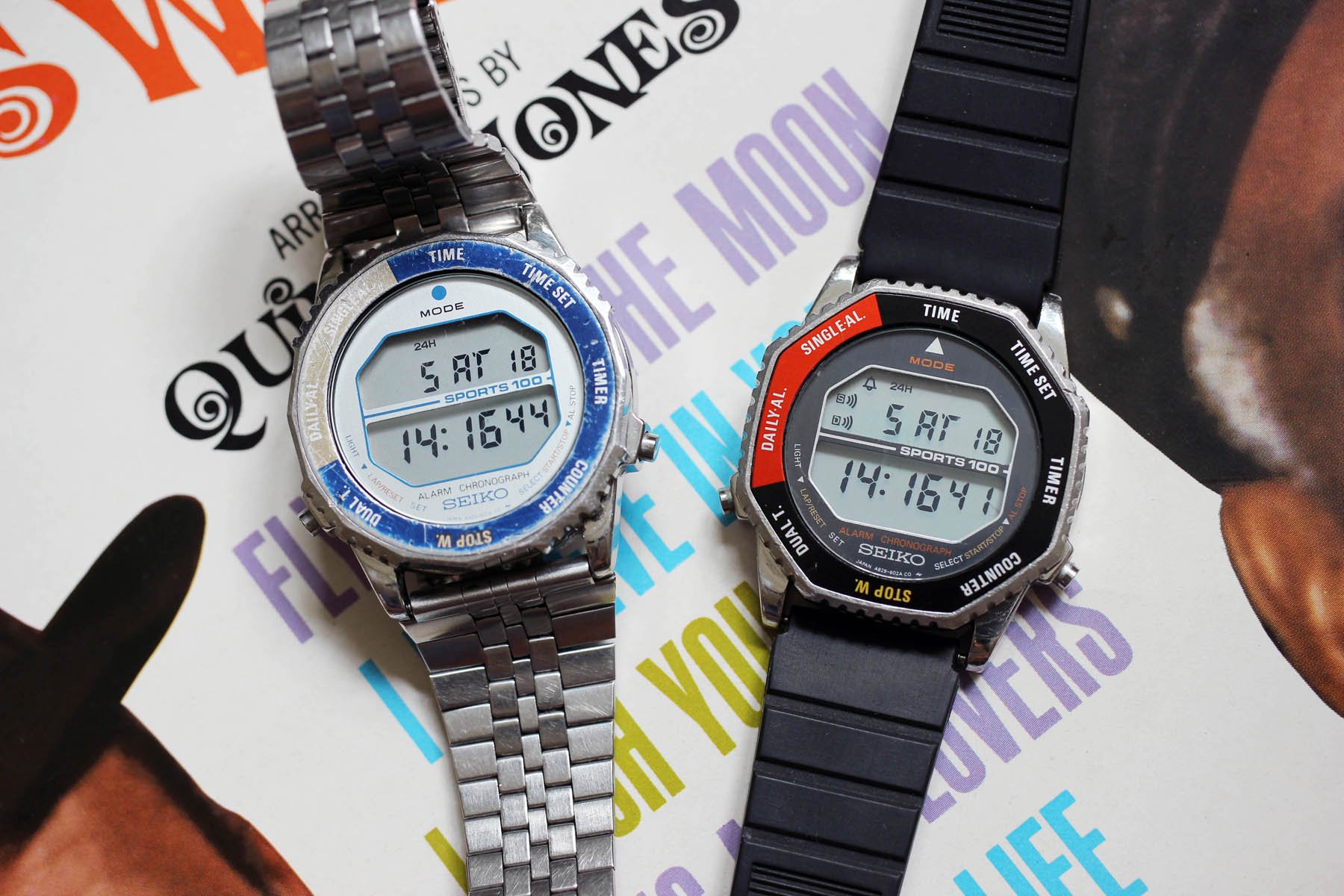 Oh, and I almost forgot to mention which astronauts wore them. As seen on pictures in the gallery, it was at least Anna Fisher, Charles D. Walker, and Paul Desmond Scully-Power, who was the first Australian-born person to journey into space and the first astronaut with a beard (cool fact). 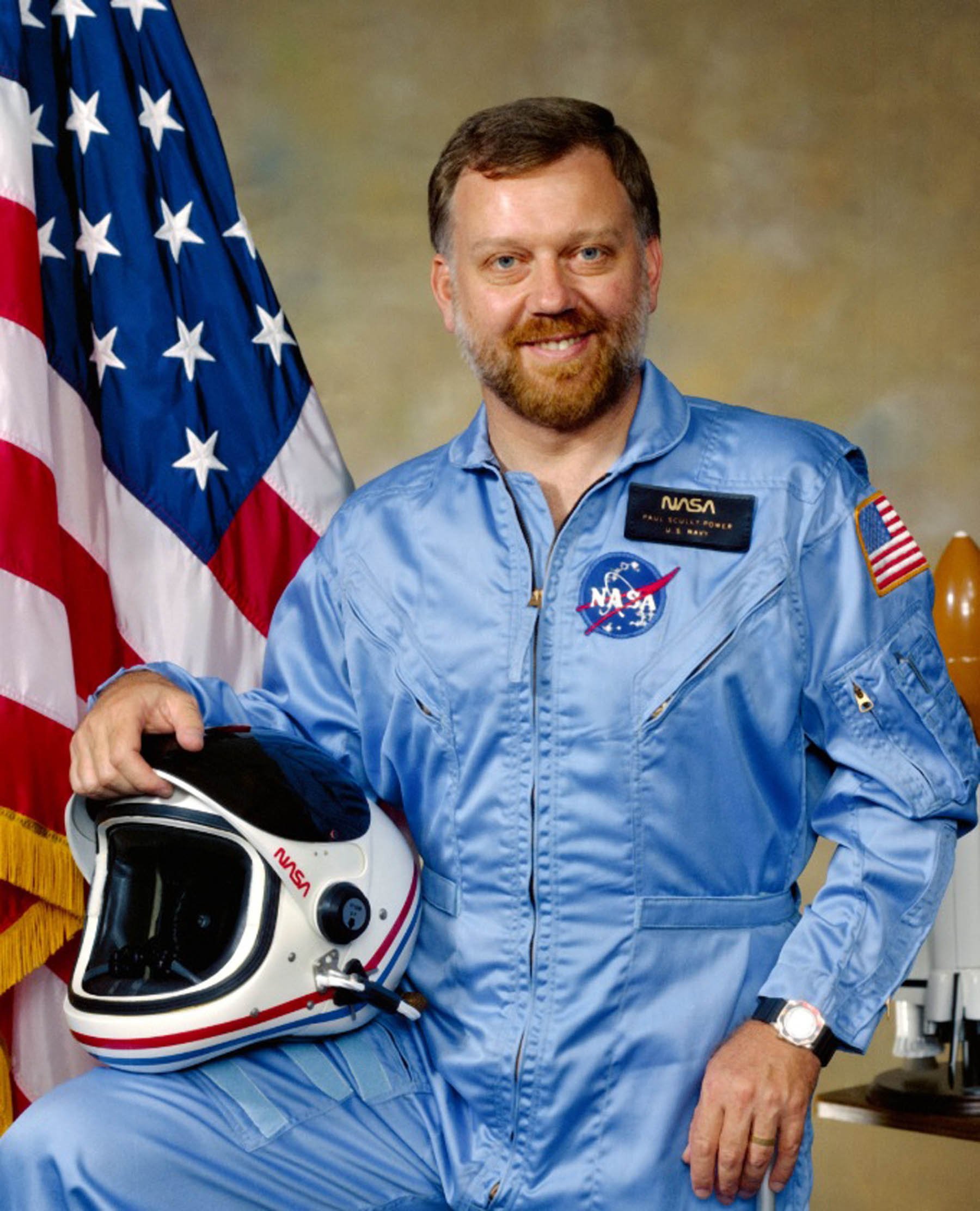 This watch has been one of my go-tos over the last few months. Unlike other “complicated” digital quartz watches, Rotocall is super clean, tide-up, and perfectly legible. At the same time, it comes with an original twist — a robust rotating bezel that changes it into a tool watch. It’s a genuine watch. And with a pricetag under €500, I wonder, why you still don‘t have it in your collection?