#TBT The Gallet Multichron Officer Is A Truly Rare Specimen

I know it sounds a bit haughty, but with hundreds of watches rotating on my wrist, it has to be something different to leave an extraordinary impression. The Gallet Multichron Officer truly did.

If you are humble, attentive, and curious enough, any watch can leave an impression. I believe that our eclectic and rich #TBT selection in the last few years only confirms that. 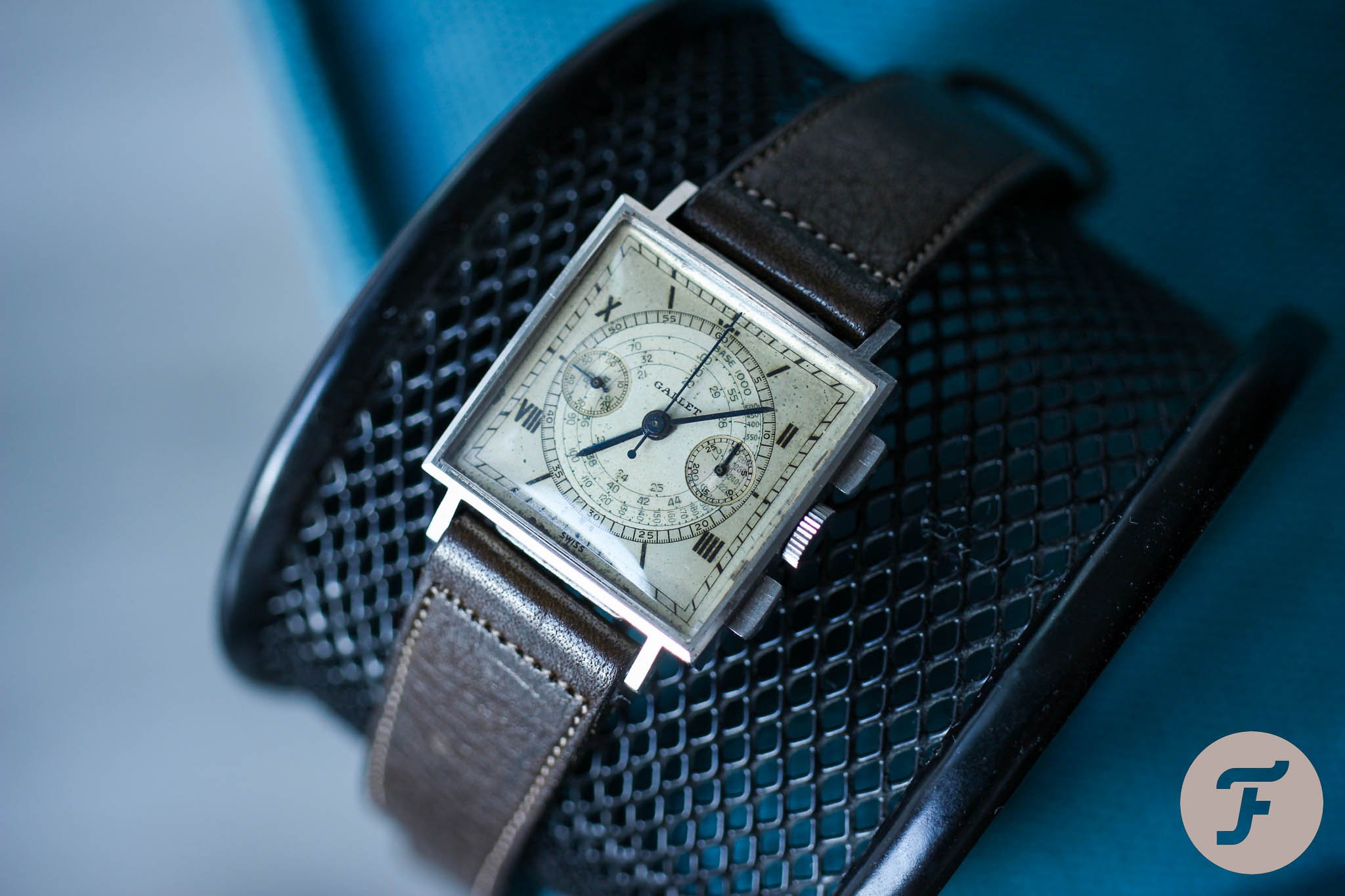 I wore daring and extravagant pieces. I wore timepieces with fascinating complications. I’m not too far off when I say that I’ve probably tried about 400 watches in the last three or four years. I wore iconic pieces that everybody wants to have in their collections. And with the same joy, I wore watches that just a handful of vintage-watch nerds knew about. I can say for sure that the baby-sized, square Gallet Multichron Officer chronograph with distinctive, sharp edges and unique Valjoux 69 hits the unusual sweet spot.

What is the Gallet Multichron Officer?

I am aware of what it means to wear a vintage watch. I know all too well how fragile they can be sometimes. But I am never afraid of wearing them. No matter how rare or “NOS” they are, they get their wrist time without any protective stickers on the case backs or any other nonsense. They are mine, and they are meant to be worn. They are all watches. 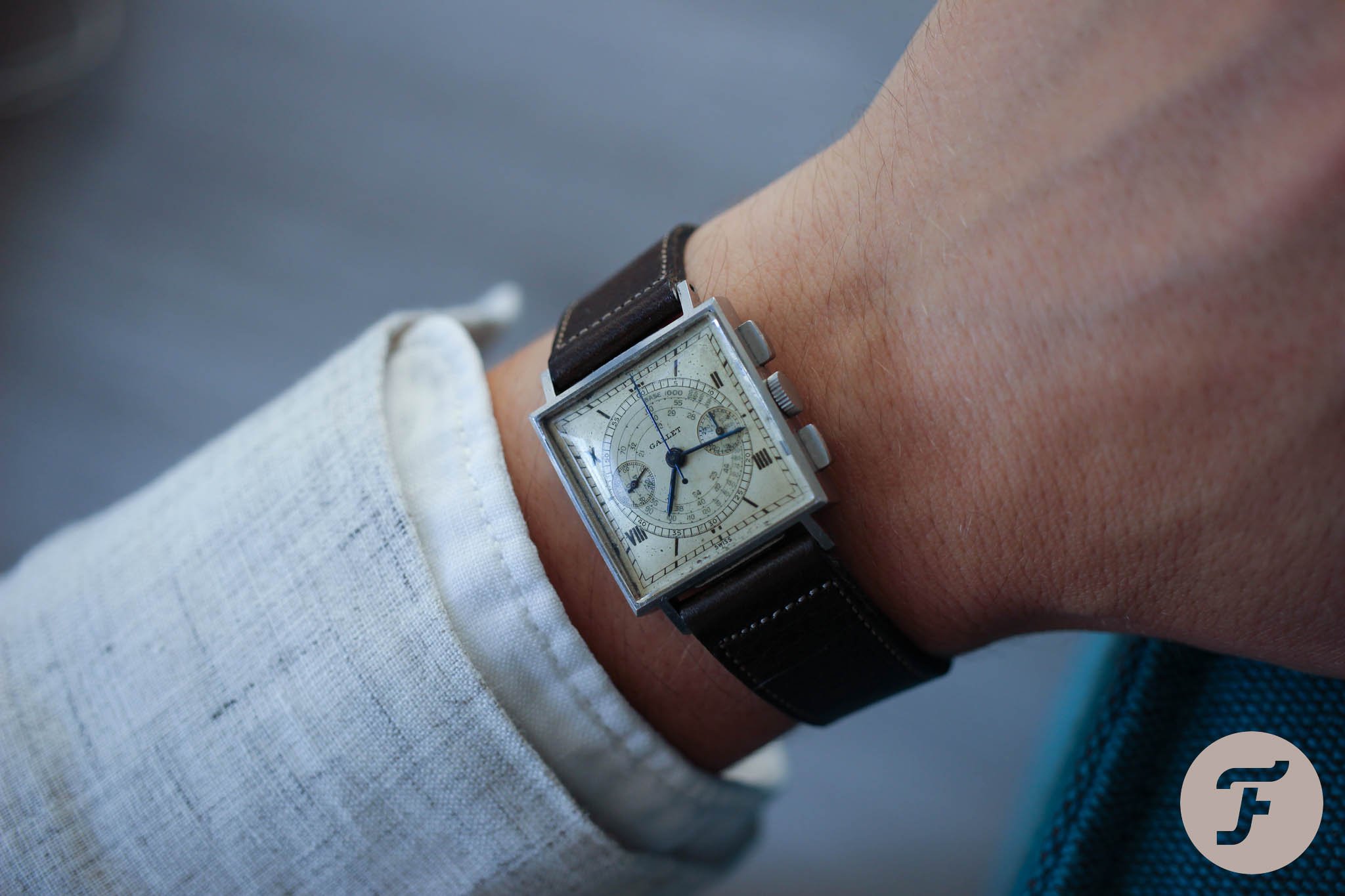 The Gallet Multichron Officer is so tiny that it feels almost like a jewel. If it were a time-only watch, though, it wouldn’t feel so intense. It would just feel like a small, square watch. But to squeeze a chronograph into a 26 × 26mm watch case? That’s pretty unusual. Even the Gallet Commander looked like a big brother when I put it next to Multichron Officer.

Take a ruler and draw a square. There you have it. That’s your Gallet Multichron Officer. Forget any curves, twisted lugs, or sculpted sides to fawn over. The Gallet Multichron Officer has one of the most simplistic cases you have ever seen. Just straight lines and right angles. Now turn the watch around. No surprise, it’s the same treatment there. If it were bigger, its pointy edges might even tear your shirt, but it would lose half of its charm at that size, no doubt about that. 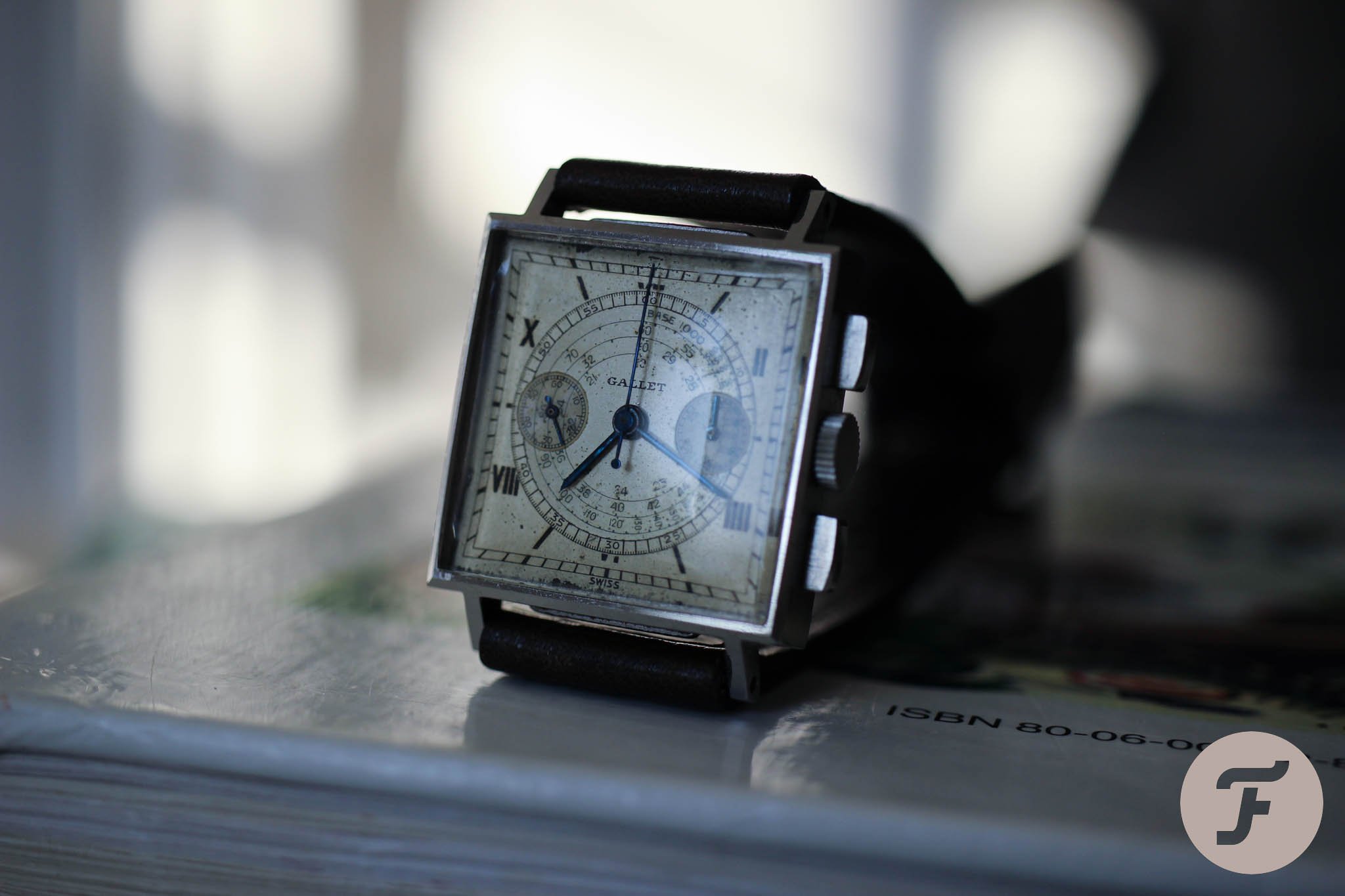 The only “fancy” detail on the case is the highly polished top edge that slopes down at the same angle as the thin lugs. The contrast with the horizontally brushed sides gives you the impression that the Multichron Officer is not a cheap watch. The only “disturbance” to the strict square-body elegance is the pushers. Their slightly curved tops are a bit “off” from the straight lines of the case.

“Gallet company archives refer to this model as a dress watch for military officers, only available by special order with less than 100 examples ever issued. Powered by the extremely rare ten ligne Valjoux caliber 69 movements, only 3964 of these high-quality mechanisms were ever made,” says the Gallet World site. The credibility of the statement is not backed by any official company records that have been made public. We may learn something new in an upcoming book on Gallet history. The publishing date has been delayed multiple times, but hopefully, it will come sooner or later. 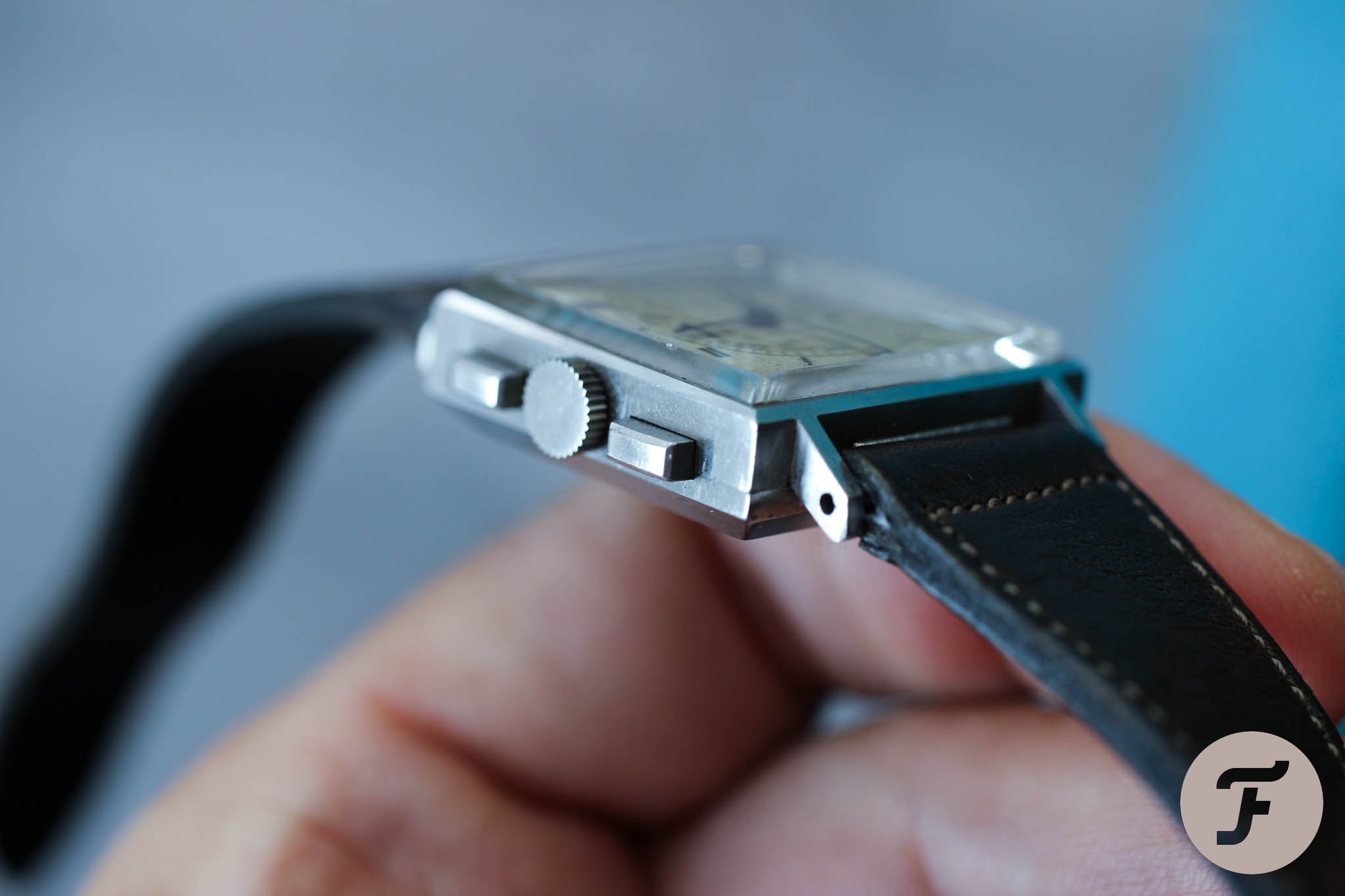 The fact is you will probably never find the Gallet Multichron Officer on your next stop at your local flea market. I checked records with a few highly educated collectors on early Gallet watches, and they confirmed that there aren’t many pieces around that we know of. In total, I’ve only seen four examples. Three of them (including mine) are documented on the Gallet World page. You can see the last one here.

The pictures on Gallet World are very low resolution, which makes it hard to study the details up close. Therefore, we are not sure if they are all original or possible redials. Interestingly enough, every single Multichron Officer has a different dial style and a different Gallet logo. 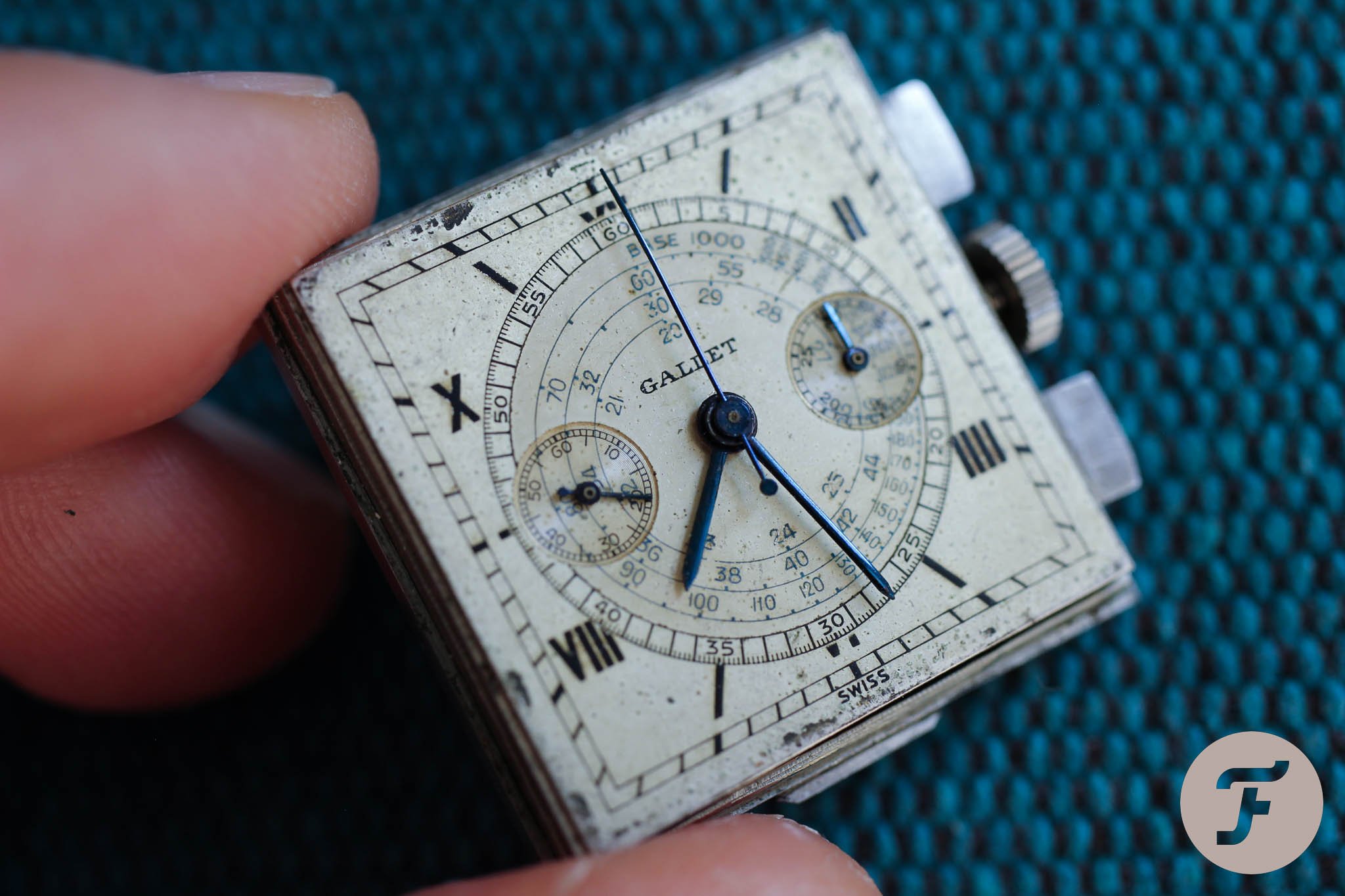 What I am sure about is that my Multichron Officer has an original dial. And it’s the only one of all four pieces with a snail tachymetric scale. The condition of this example is far from perfect, but it’s good enough and perfectly honest for its age. Again, the exact age is uncertain, but according to Gallet records that haven’t been made public yet, the first Multichron Officer dates back to 1939. That means it’s about the same age as one of my other grails with an utterly spectacular complication, the Mido Radiotime. 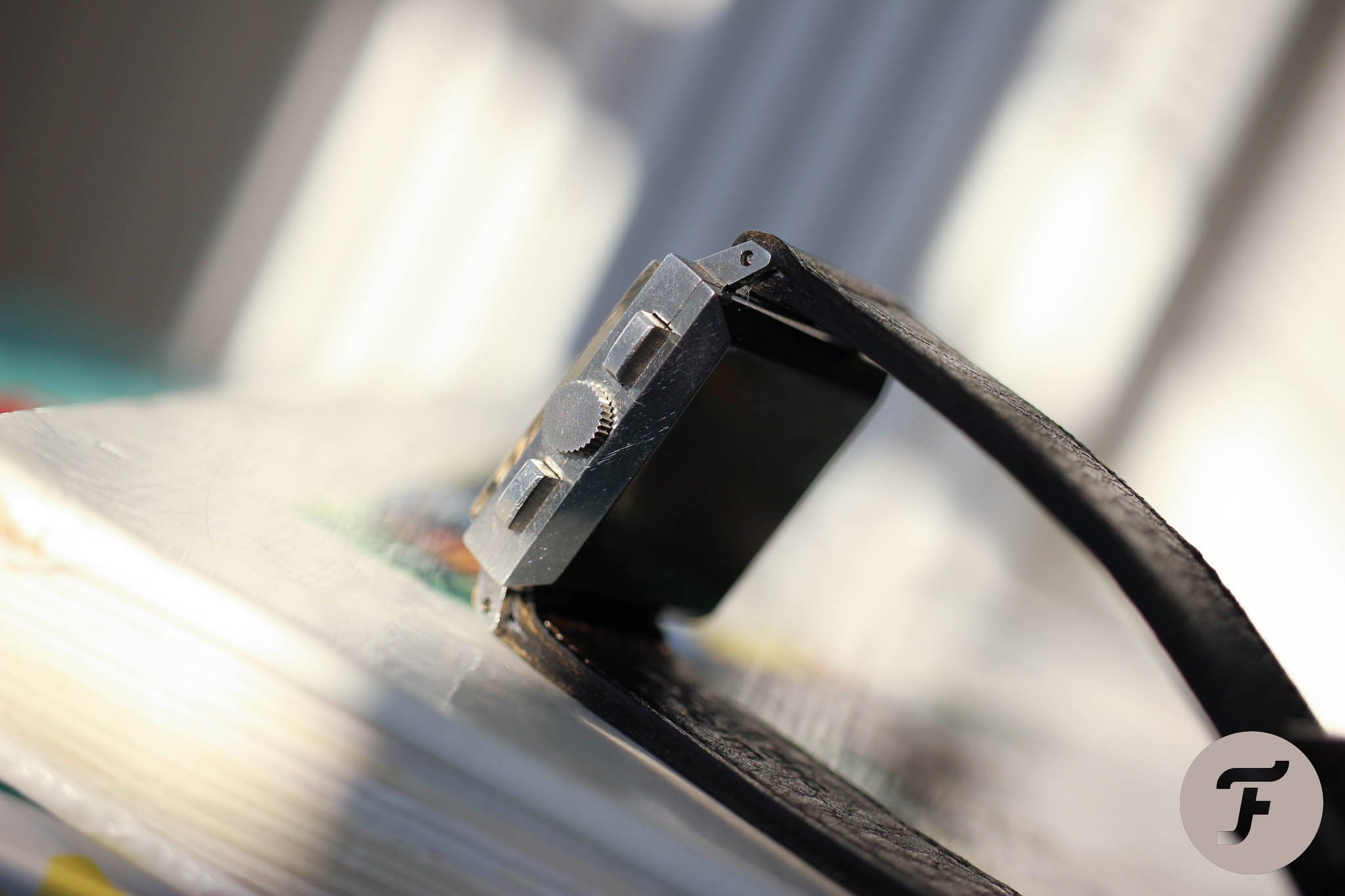 Back to the wrist

Seeing Roman numerals in a square case is nothing special. Roman numerals always had a touch of grandeur and elegance. You almost feel that a square case asks for them. But they are pretty unusual for a Gallet watch. It’s also unusual to squeeze two sub-dials and a busy snail tachymeter scale in a small, round minute track that is already squeezed into a small, square space. I haven’t seen anything like that before, and it’s really hard to describe.

Gallet’s blued “signature” hands are pleasing to my eyes, and the time is perfectly legible despite the watch’s size. I will admit, however, that the sub-dials are so small that I can’t read the minute counter while driving. Multiple snail lines running across it do not help much either. I guess it’s that weird mix of style, shape, size, and design that creates a never-felt-before but unforgettable watch experience. 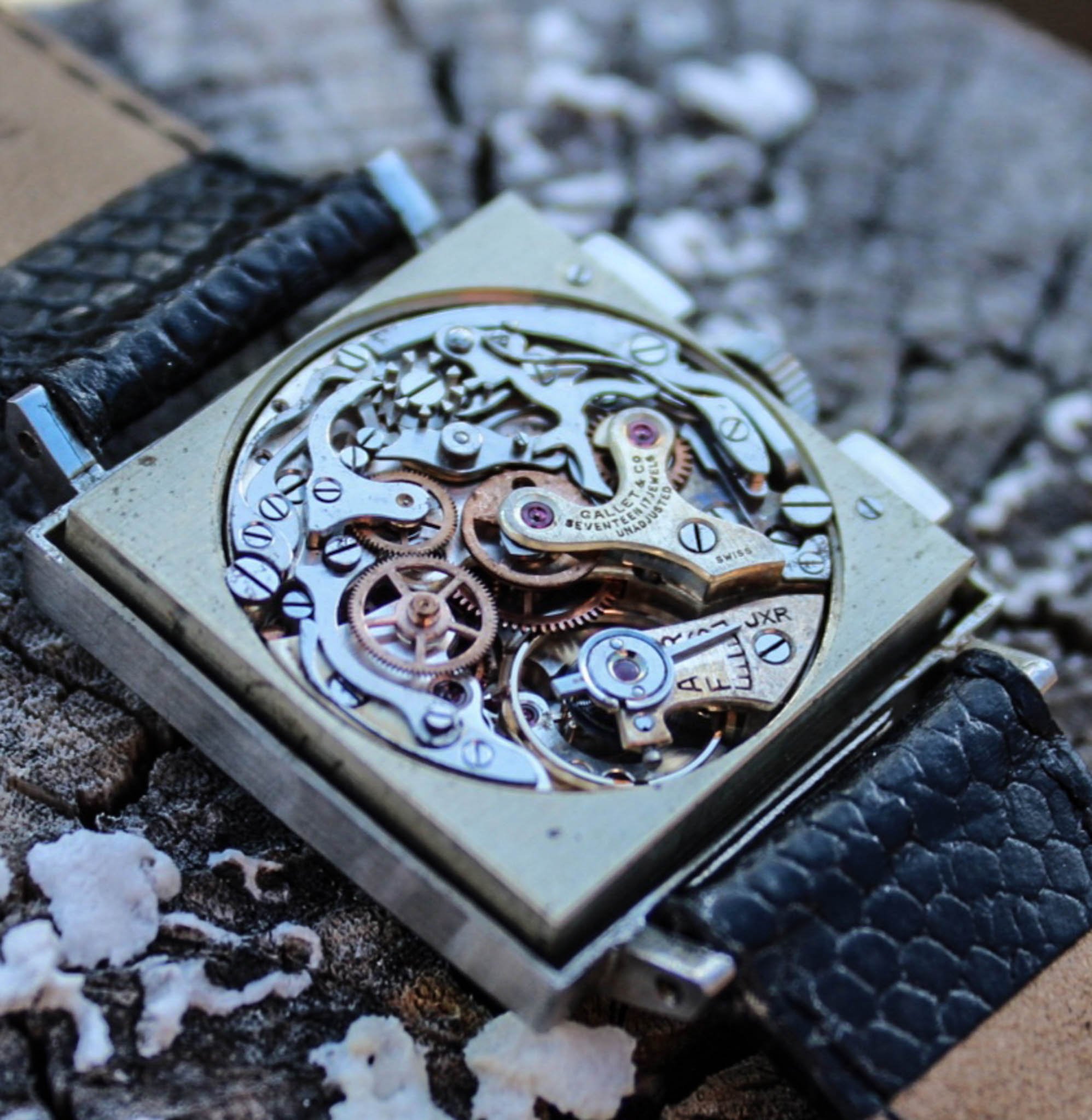 This is my first Valjoux 69 movement. The Valjoux 69 measures only 23mm in diameter compared to the 29mm diameter of the mighty Valjoux 72. Six millimeters is quite enough to make you assume it will be more fragile and wonky. Well, it’s not. At first, even I approached it very gently. But strengthened by the modest case dimensions, the pushers’ solid, long, and rich counter-pressure instantly disrupted all of my wonky expectations. 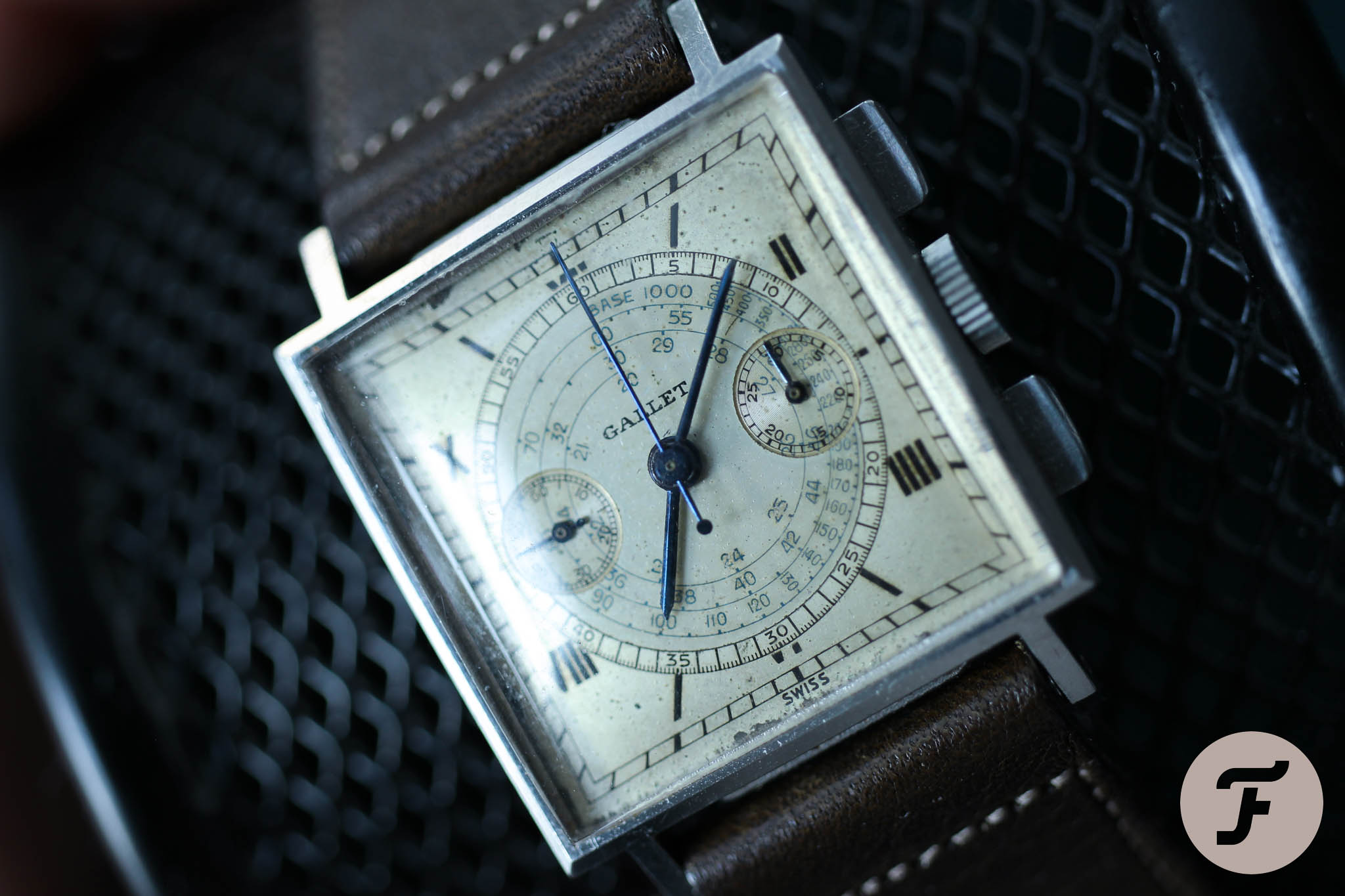 The Gallet Multichron Officer is one of those vintage watches that never ceases to provide a sense of wonder and intrigue. That’s not because it has any super-special features that you haven’t seen before. You’ve seen small watches, Roman numerals, and snail tachymeters. You’ve probably also played with chronographs millions of times. But to have such a complete chrono experience in such a tiny package with so many different ingredients is quite novel and profound indeed. Happy hunting.