A watch of many faces
Tomas Rosputinsky
comments 9
Share

If it hadn’t been for this magnificent watch catch, I would never have learned that the Japanese had a Bond-like hero that fought bad guys too. In the 1965 TV drama Spy Catcher J3, Agent J3 drives a flying Corvette Stingray, but more importantly for today’s story, he wears the Calendar Auto Orient Swimmer Worldtrip.

Orient was one of those watch brands that I was aware of but kept towards the bottom of my attention list for a long time. You know, we can‘t have them all, can we? I somewhat liked the King Divers and the Weekly Orients, but not so much as to buy it. It was the stunningly creative dial on the Calendar Auto Swimmer Worldtrip that made me buy the first Orient watch for my collection. The only show stopper was the $2,000 price tag, which painfully let me know that I came to the party a bit late. 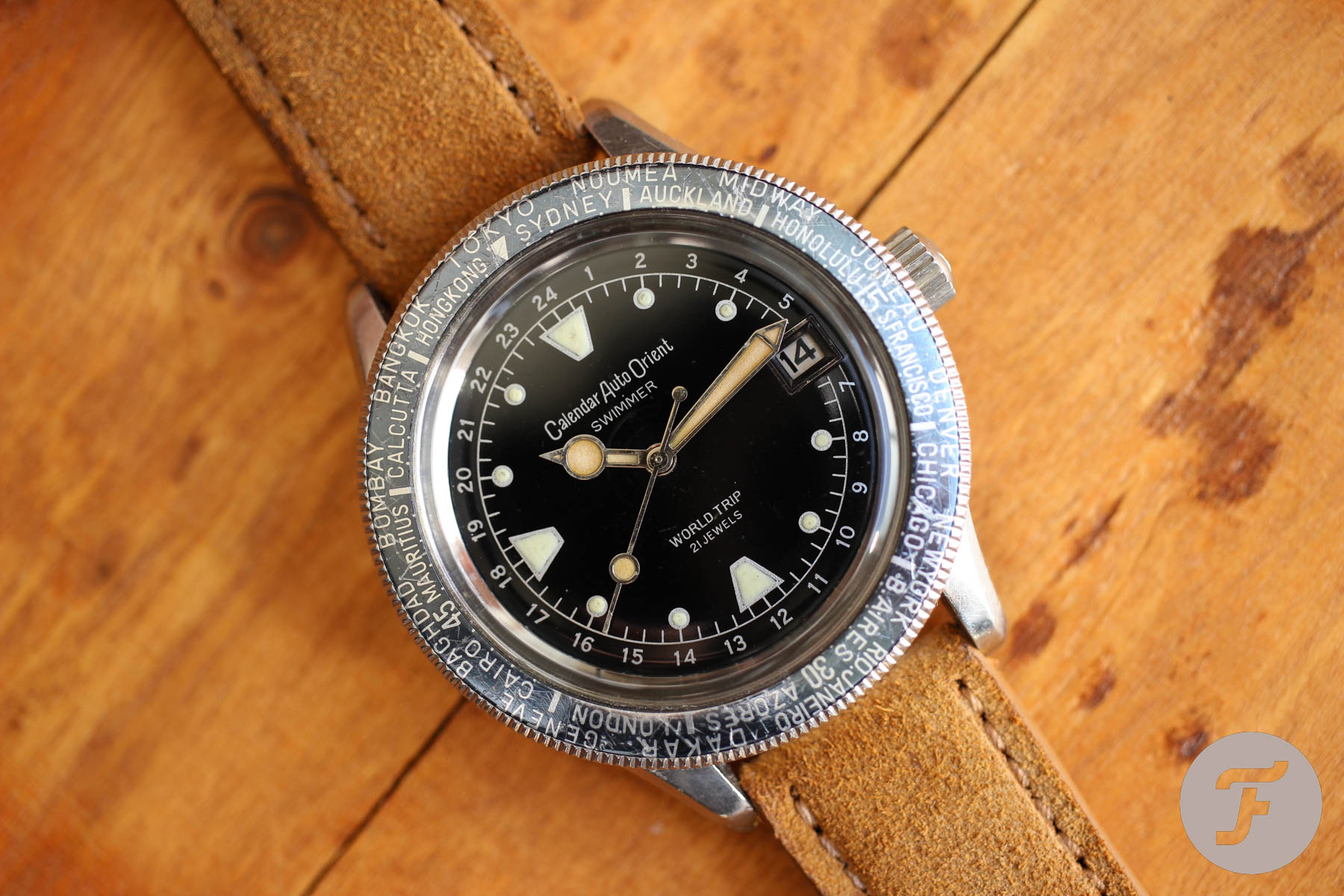 The rule of the unexpected worked once again. My friend Haroon who has quite a stunning collection of (not only) Orient divers posted the link of one beaten Swimmer he found on eBay. The pictures were bad and the condition questionable. There was a circular smudge left on the dial right under the hour hand and the seller’s description said the watch was not running. 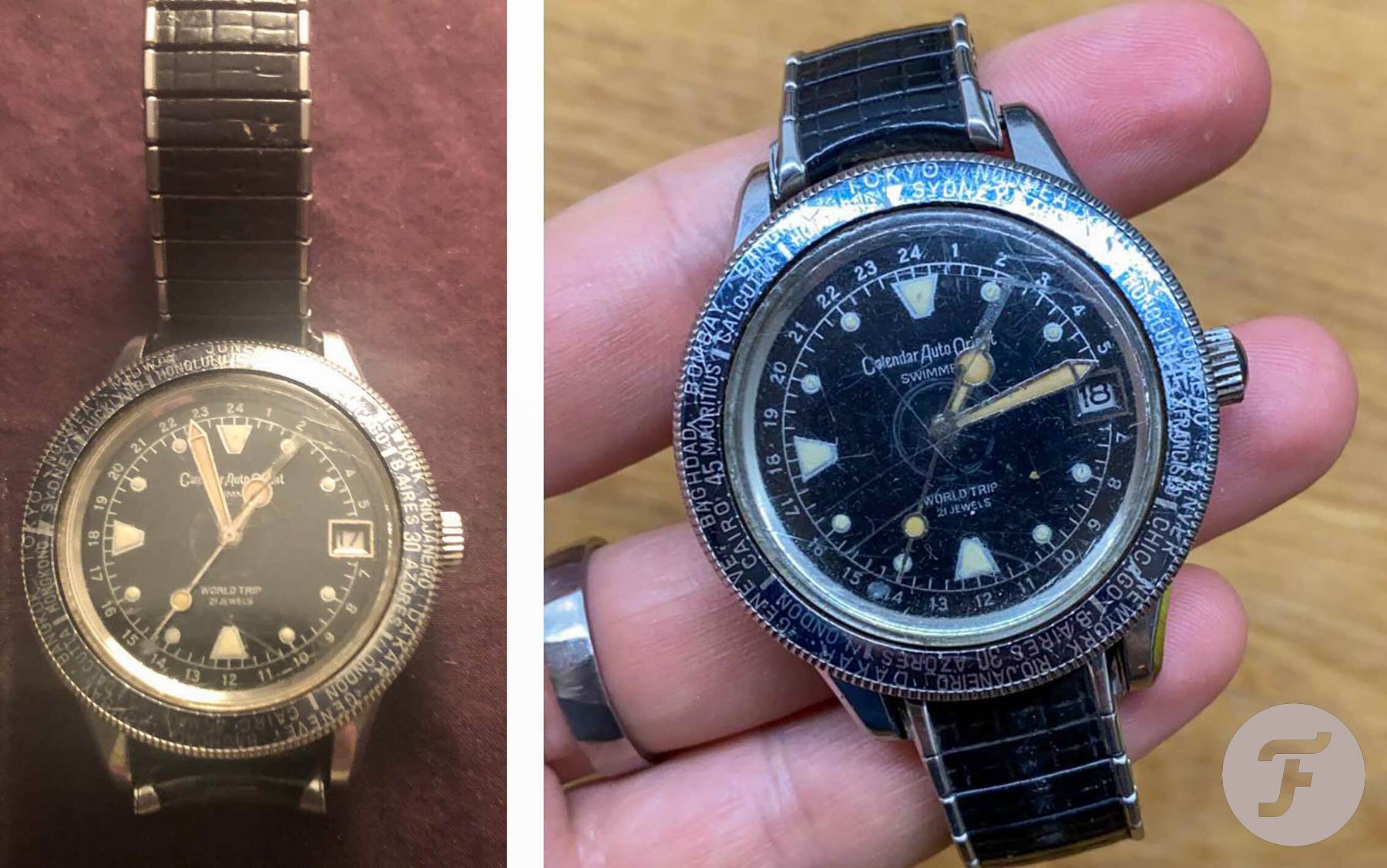 I was watching the auction, but I missed the end of it the first time. Thankfully, no one grabbed it and the seller relisted the watch. I offered a direct buy-out, but the seller declined my offer. Good for me in the end, as there was no competition and I auctioned it for even less than I initially offered. We witnessed a few Calendar Auto Orient Swimmer Worldtrip being auctioned north of $2,000, yet I paid just a third of the price. Well, for the condition as seen above.

I believed the watch was honest and just dirty after years of use. Thankfully, my watchmaker Tomas confirmed it. There was nothing broken or lost. Once he ultrasonically cleaned and assembled the movement, the Calendar Auto Orient Swimmer Worldtrip started ticking as new. 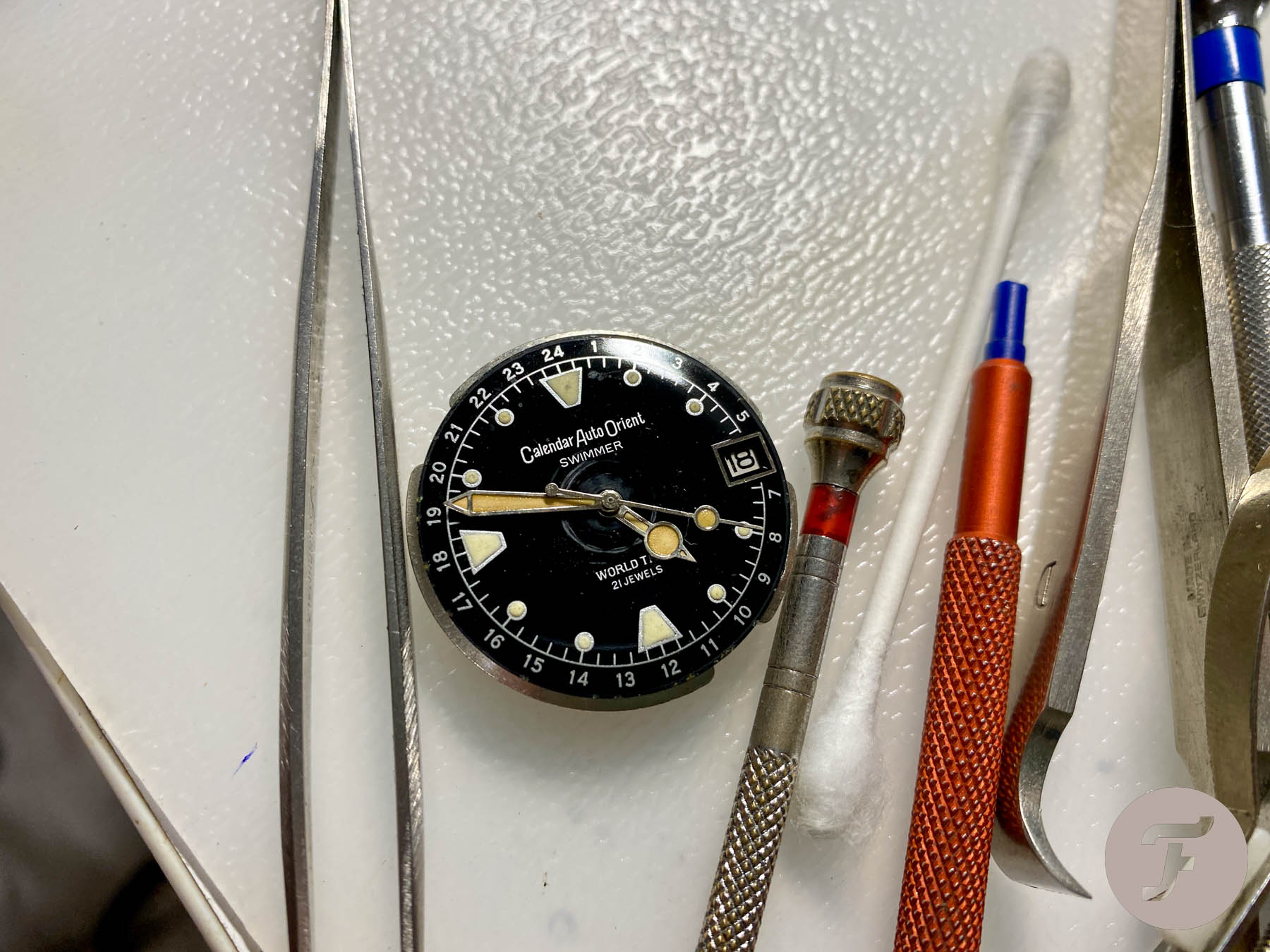 Are you wondering how such a circular smudge could appear on a watch that had seemingly never been opened before? “The screws holding the dial loosened which resulted in the dial lifting a bit. If the owner stopped using the watch and fixed the dial immediately, nothing would have happened. Obviously, he wore the watch anyway and that’s why the hour hand is sliding slightly over the dial left as a reminder,” Tomas offered a pretty simple explanation. „It happens quite often, this time with a happy-end for you. I managed to clean almost the entire smudge. Just a tiny part of the ring is actually a hair-thin scratch, but it is visible only under certain light conditions and viewing angle.“ Job well done, judge for yourself. With the new glass on it, it looks like a new watch.

The Calendar Auto Orient Swimmer Worldtrip is different in so many aspects that it instantly grew close to my heart. First of all, it’s surprisingly big. You don’t see many 1964 watches in 40mm diameter. The bottom of the bezel clings tightly to the case but the top edge bleeds over the case for another millimeter or so. Well, here are extra 2mm of the diameter that makes the Calendar Auto Orient Swimmer Worldtrip one of the most spacious vintage watches I have. Also thanks to the flat glass, the Orient Swimmer often strikes me like a big flat medal sitting on my wrist. 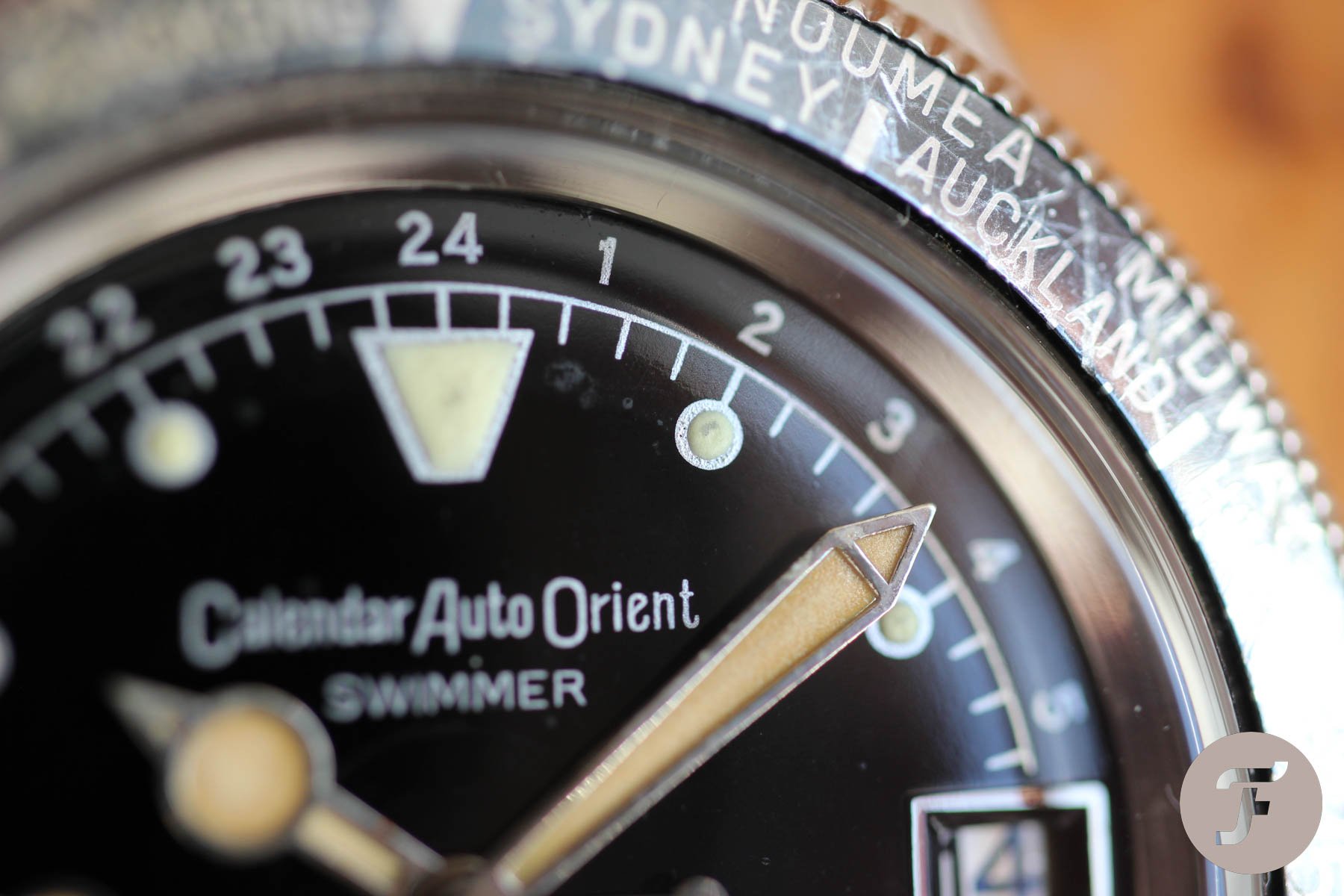 There isn’t anything daring or artificial, just all the standard elements you know such as the minute track, date window, and lume indexes. Despite the simple setup, I find this dial overwhelmingly individualistic and original on all merits. The minute track is perfectly simple and „complete“. By that, I mean that it’s not interfered by with superior hour indexes. These are cunningly and gently connected to the minute track in their designed position with matching silver rings. By the way, the silver printing is spectacular and perfectly shiny even after 60 years. The lume application in the silver rings is a textbook example of how it should be done. Also kudos for balancing the dots’ size, which is neither uselessly small, nor Rolex-like boring. 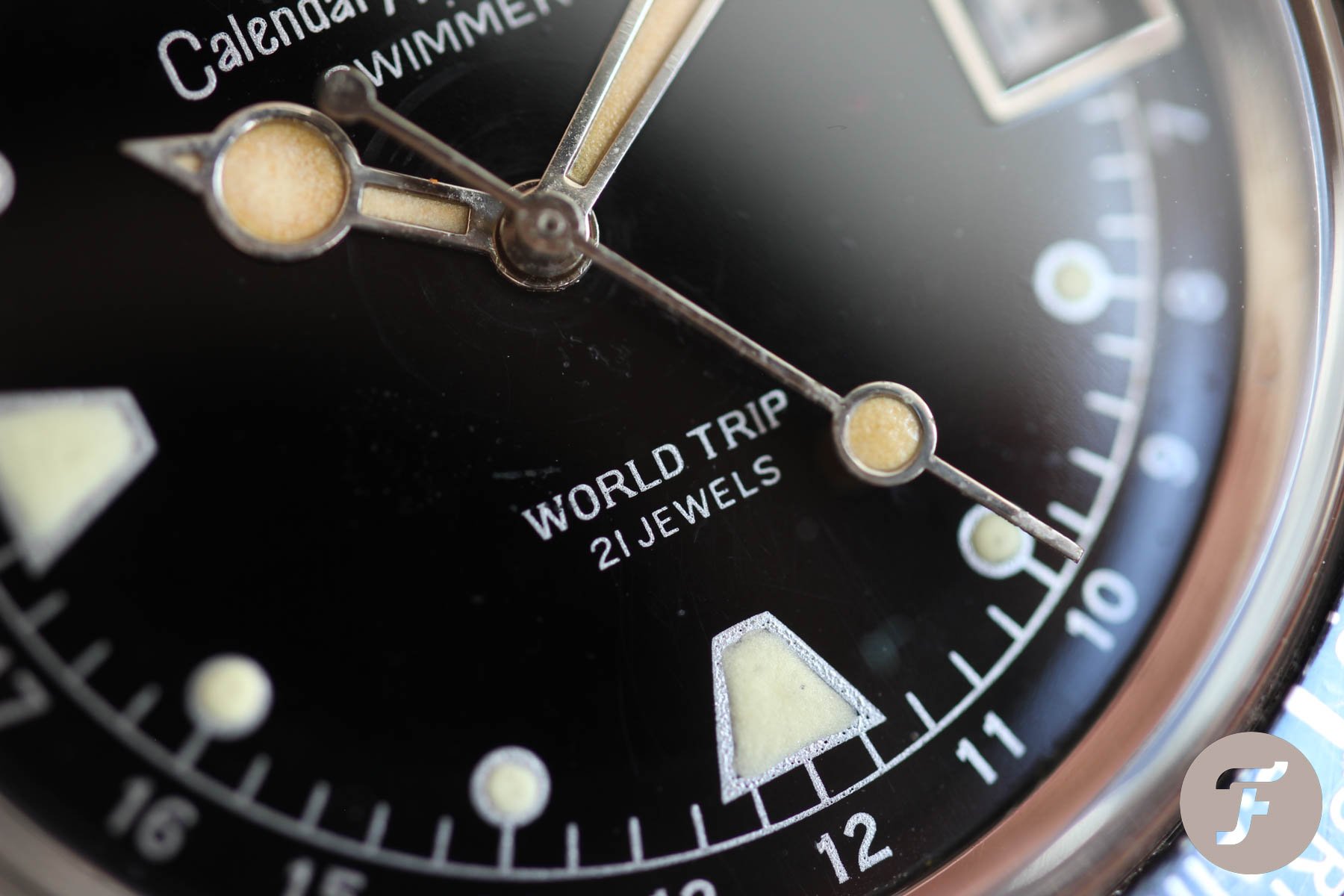 To put three trapezoids instead of the 6, 9, and 12 might sound like overkill, but quite the contrary. It’s fresh and gently counterbalances the integration of the date window at 3 o’clock. Did I mention the hands? If you like Mercedes-styled hands, I bet you will love this one even more. The hour hand looks like a little bird with a tiny beak. The self-confident and perfectly legible minute hand has the same beak-like tip and perfectly contrasts with the lollipop-style central second. Also, notice the typical discoloration between the dial and hands. While the dial lume feels mintier, the hands have turned sandy brown. So be aware of the fact and don’t be relume suspicious if you try to locate one.

Calendar Auto Orient Swimmer Worldtrip. Way too many words? I agree. With the 4ATM water resistance, the Swimmer part might slightly arguable. Especially when pondering over the beautiful diver engraving on the case back. The Calendar and Auto are quite obvious. The world-timer is what makes it pretty interesting. Especially if you combine a world-timer bezel with 24h markings decently projected directly on the dial. 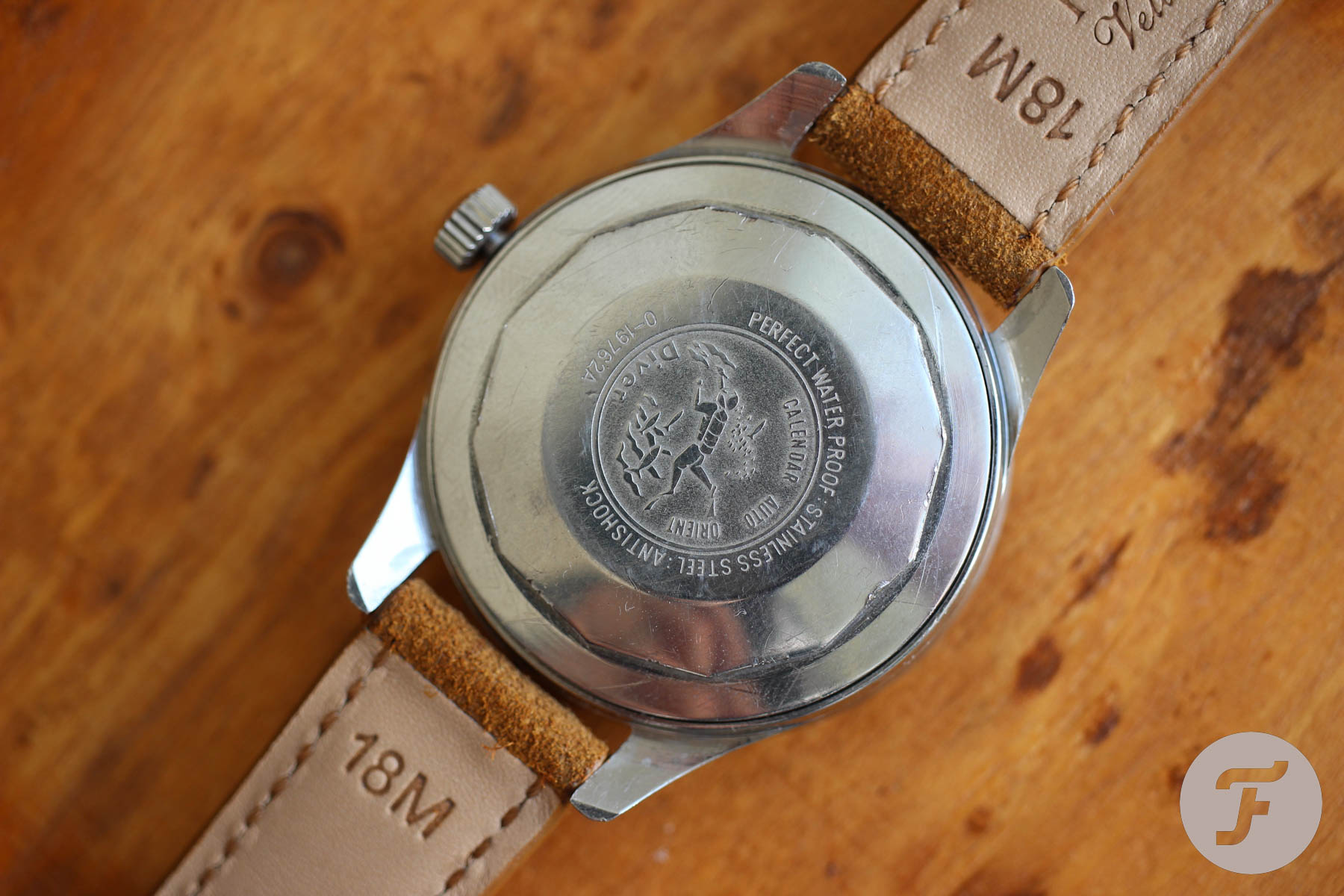 Isn’t the bezel a bit of a mess? Agreed, it is, but it is quite a mesmerizing mess. It needs a lot of attention to spot the 15, 30 and 45 markings. There is another „less messy“ dial version that I would prefer, but sometimes you don‘t get to choose. The signed crown is just about the proper size. Short lugs fit the watch. I first fitted it with a rubber black strap. When I was recently juggling around with straps, the Calendar Auto Orient Swimmer Worldtrip accidentally ended up with a light brown suede strap. I liked the combo so much that I wear it like that ever since.

There is not much (and validated) information in English on the Calendar Auto Orient Swimmer Worldtrip besides that it was first introduced in 1964 and the price at that time was 12,000 yen. What really excited me was finding the connection with the 1965 TV spy drama called Spy Catcher J3.

J3 was an agent that worked for TULIP, The Undercover Line of International Police. TULIP had branches all over the world, and the agents working there were called spy catchers. The head of the Japan branch was J1. J3 played by Yusuke Kawazu was the best TULIP agent. Their enemy was TIGER, short for The International Group of Espionage and Revolt. You can still get it on DVDs via Amazon.

Spy Catcher J3 also had their Japanese version of Q, the gadget master. He was called J2 and he equipped J3 with a lot of powerful weaponry. The J3 Corvette Stingray had an in-vehicle phone used to contact J1. It could become an air jet, it could glide the sea or fire missiles. From what I learned, J3’s favorite watch was the Calendar Auto Orient Swimmer Worldtrip and it had an integrated winch or bomb launcher in the crown. 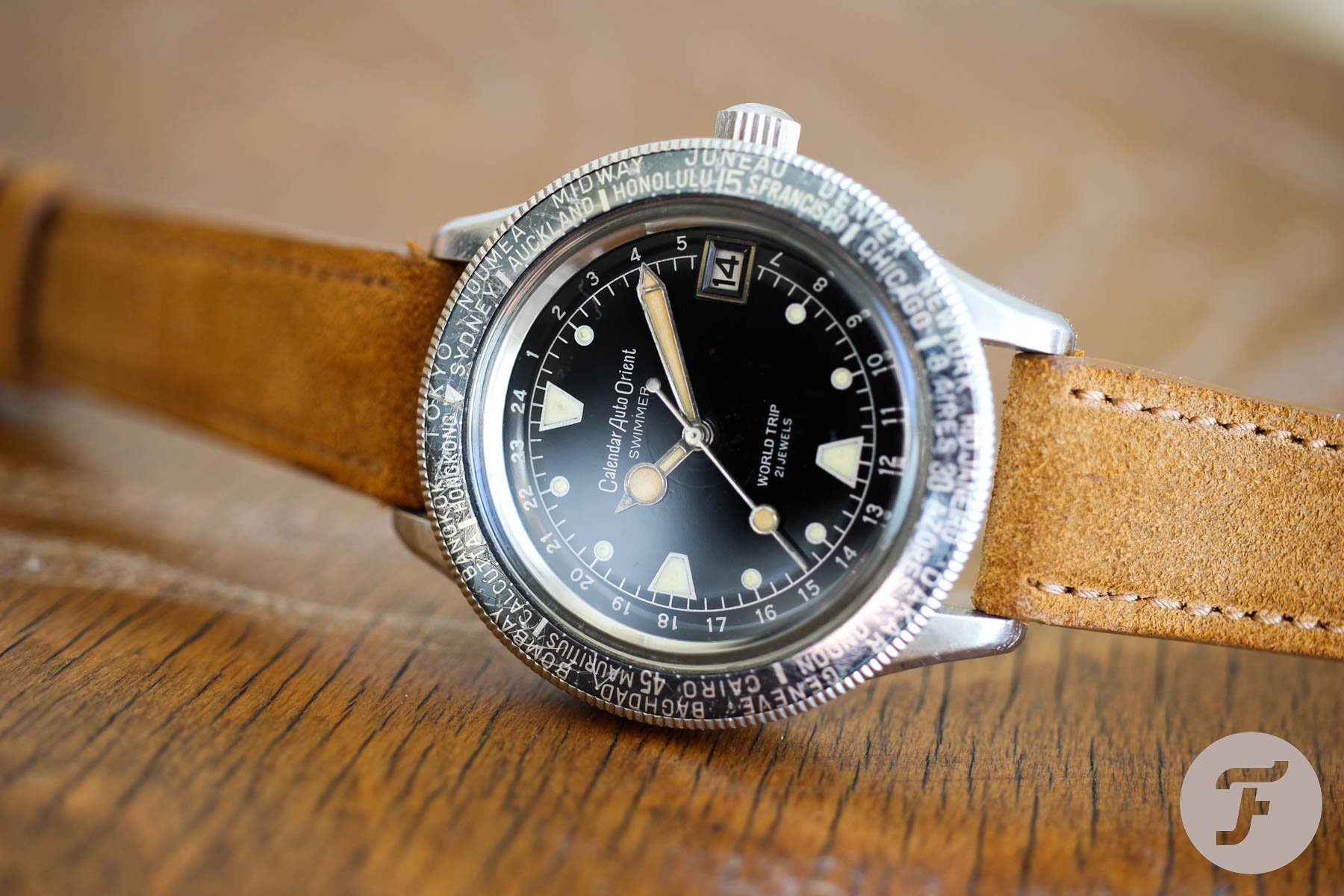 Prices of the Calendar Auto Orient Swimmer Worldtrip are slowly climbing up. The watch is powered by an Orient 670 caliber, which was quite a robust movement. I can only tell you that I enjoy wearing it and wear it quite often lately. It’s unusual, practical, and feels modern. It wears comfortably and the dial reads quickly and easily. If you have an option to get one, you won‘t make a mistake. If you like sunny tones, look around for the gold-tone case with a strikingly bright dial. Although I personally prefer this black classy dial.

To conclude, I guess that the you-never-heard-of-this-movie background doesn’t change much, but it is nice to find out that a watch you liked and decided to buy was previously a movie prop. It’s a warming feeling and recognition for your fine taste. And who knows, maybe we will find some readers and fans in Japan that could dig into the story even deeper. Happy hunting.