This is probably the only watch in the world with a pair of pushers at two and eight o’clock that need to be pressed at the same time. And the purpose of the Securiton watch is no less fascinating than its design. Join us on an exciting exploratory journey of a unique wristwatch with a built-in alarm-triggering system.

It’s the wee hours of a quiet Tuesday morning, April 26th, 1977. All the visitors at Musée D’Art Et D’Histoire left the building many hours ago. A bored night guard looks at his wristwatch with a cable attached to it that disappears under the sleeve of his perfectly ironed white shirt. It’s 02:54 AM. He finishes his cup of coffee and gets ready for another security check around the fine-art exhibition. 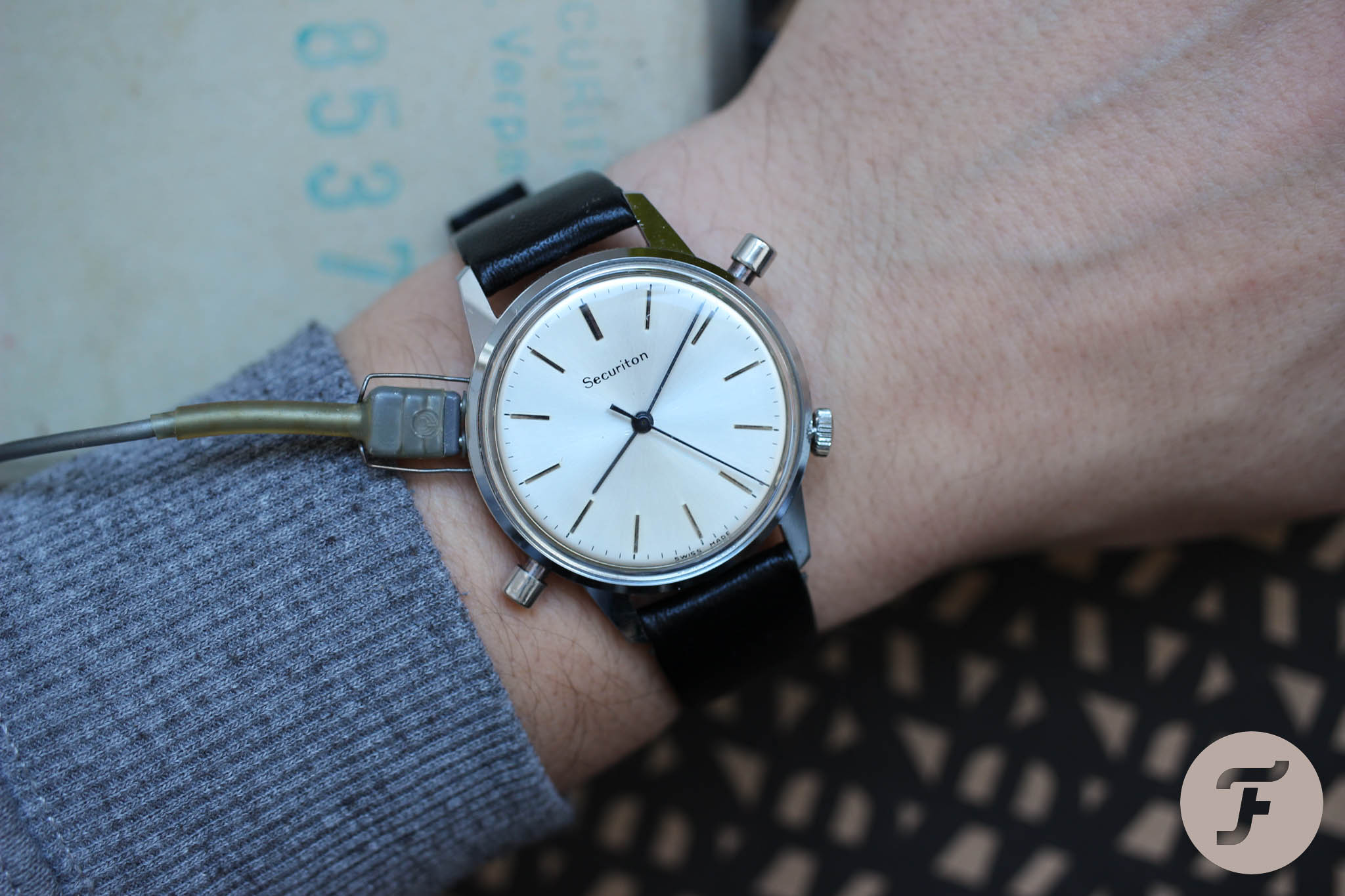 The guard walks slowly through a hall so high that he can’t see the ceiling. He stops in front of an old oil painting that reminds him of the countryside he used to live as a kid. But as he gazes at the painting, serenely reminiscing, a quiet cracking sound rips him out of his thoughts. He follows the gentle sound, which becomes louder and louder as he approaches the main exhibition hall. Hiding behind the wall, he stealthily sticks his head out to observe the situation unfolding before him. But a few meters away, with his back turned to the guard, is a burglar tying a rope around a painting. Once finished, the burglar lifts the painting out the window, watching as his accomplice on the roof hoists it up.

Without making even the tiniest sound, the guard reaches for his Securiton watch. His eyes fixed on the burglar, he presses both pushers, triggering the cable-attached transmitter in his vest pocket. At that very moment, the transmitter sends a code consisting of several characters to the local police department and Customs. Shortly after, the emergency team reaches the museum, catching the burglars before they manage to load the loot into their van parked nearby.

The most badass watch

Well, I’m not Tom Clancy, but that’s one example of how the Securiton watch might have been used almost five decades ago. According to the original documents of the Securiton watch, this special surveillance device was meant to be used by night watchmen, exhibition and museum guards, supervisory staff of events, or any other guards that needed to move freely in the building or area. The Securiton watch allowed them to trigger the intruder/burglar alarm system from any point. 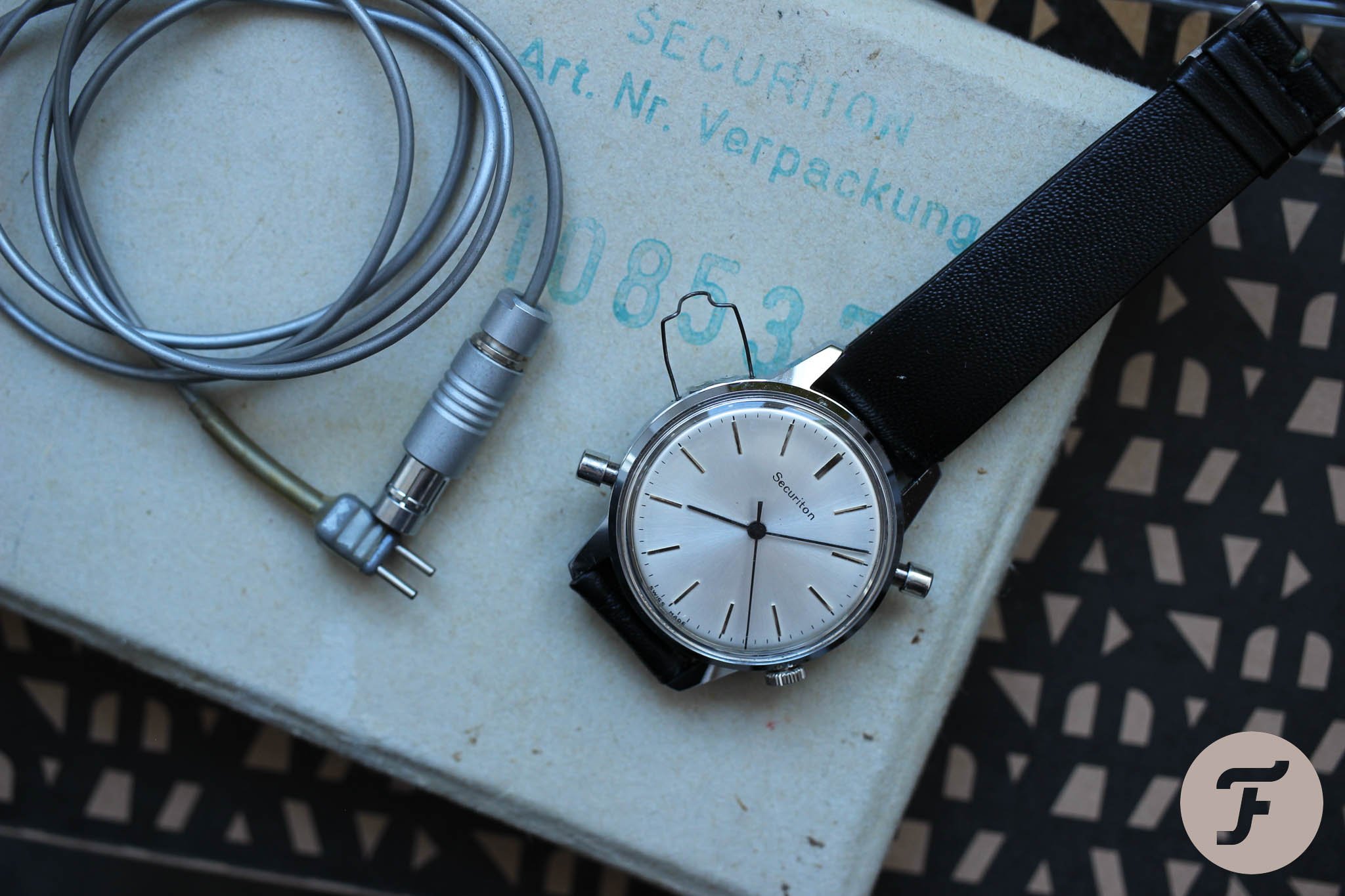 When I googled Securiton, I ended up on the website of a company with the same name. Securiton was founded in 1948, and it has more than 760 employees in 28 locations worldwide. It’s a leading supplier of alarm and security systems in Switzerland, and I had no doubt that the Securiton watch was part of one of them. So, I took a few shots of the watch, and I reached out to the company’s representatives.

“This watch has been used by banks and jewelers. In the event of an attack or threat, an alarm could be triggered with the pushers on the watch. The watch was connected to a shortwave transmitter. The receiver was connected via the network from IG TUS to the Police, the Customs, and Swiss Securitas. The systems were extended later with a death-man switch which has been used by the guards mainly in chemical- and sewage-treatment plants,” explains Hanspeter Lüdi, Area Sales Manager from Securiton, which is still based in Zollikofen.

Securiton hasn’t disclosed what companies were using this watch with its integrated alarm trigger. The company also can’t give information about the watch manufacturer or the specific production numbers. On the other hand, Securiton confirmed that it was not merely a project watch, but a real tool that guards actually used in the field. I believe that. In the Securiton-stamped box that I got, there were two sealed NOS watches and one cable. Though the watches are pristine, the cable looks like the one on your headphones does after two years of heavy use. So I guess the cable itself saw some action. 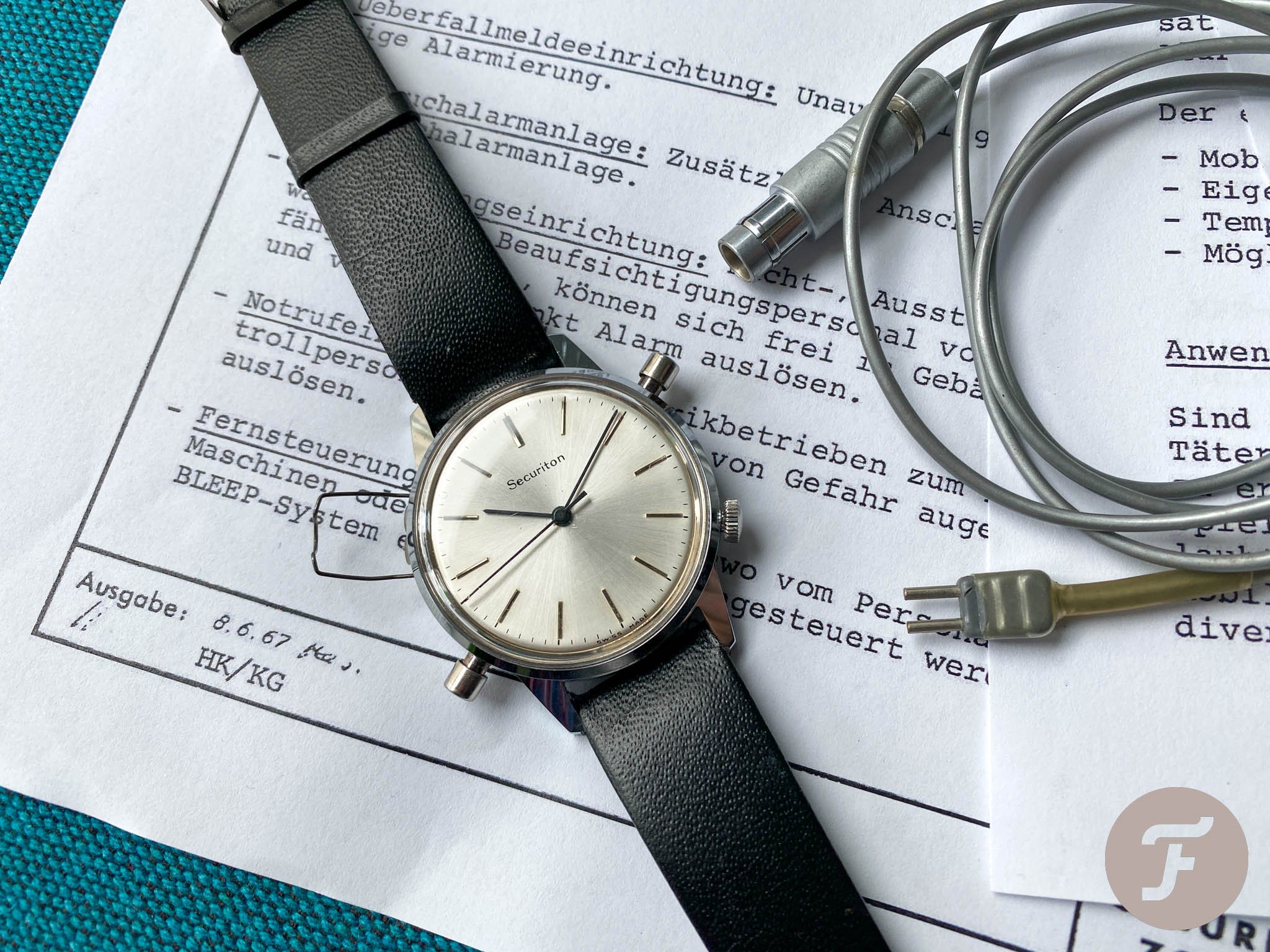 After some internal digging, Barbara Löffel, the Securitas Gruppe PR Manager, managed to find an old four-page long presentation script written on a typewriter. I had only hoped to get a bit of info, but the detailed four-pager with photos left me speechless. One of the pages has a tiny window in the left bottom corner titled “Expenditure”. Handwriting inside dated 8/6/67 might indicate the origins of the project. Exciting! 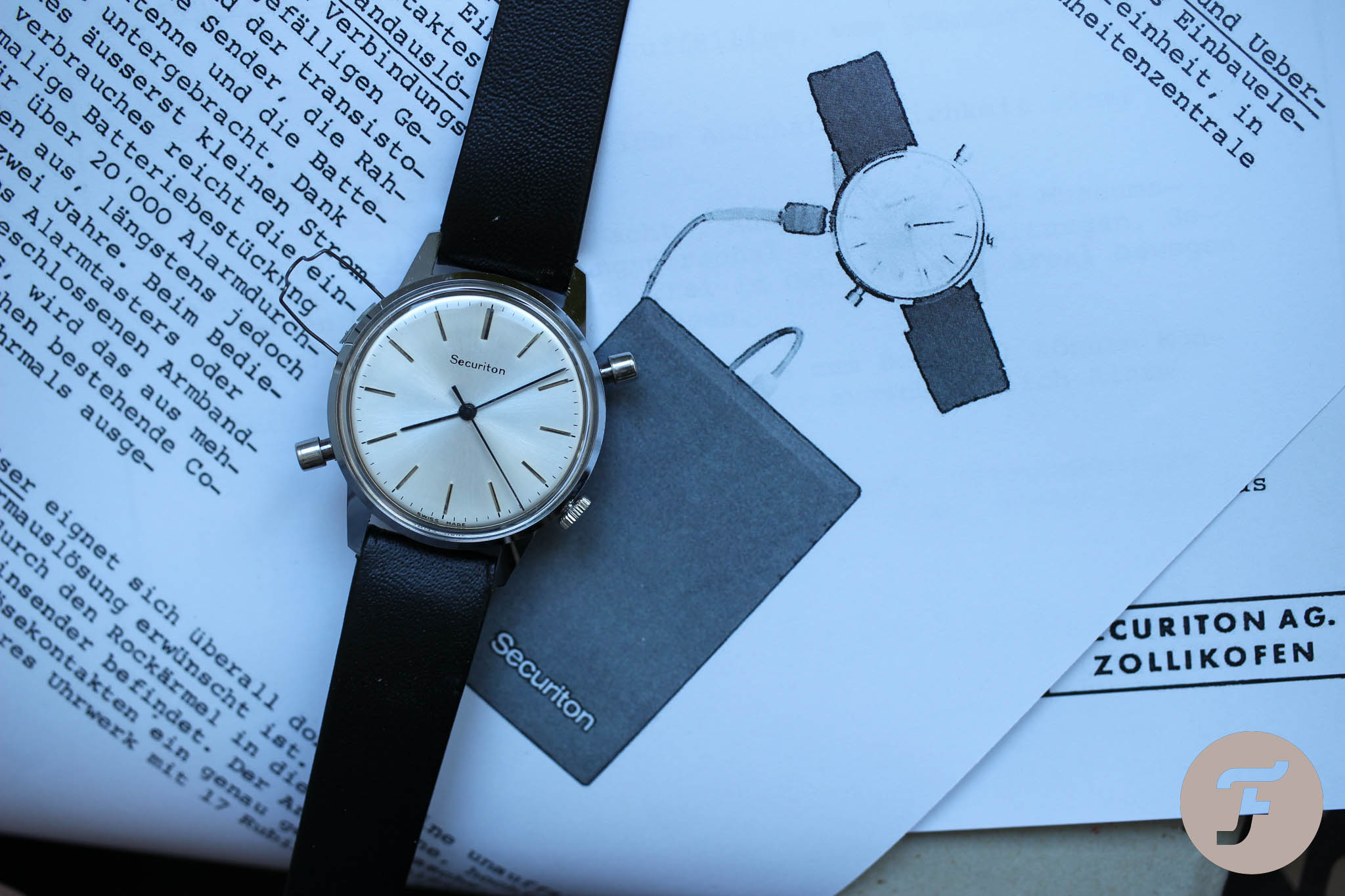 Right on the front page, I found an answer to what the cable connected the watch to. Thanks to the extremely low power consumption, a one-time battery installation in the transmitter was sufficient for over 20,000 alarm transmissions or two years of use. When operating the alarm button or the connected wristband release, a code signal consisting of several characters is transmitted several times. The transmitter’s dimensions of 98mm × 62mm × 26mm made it about the size of an external hard drive. I can see it easily slipping into a guard’s vest pocket. 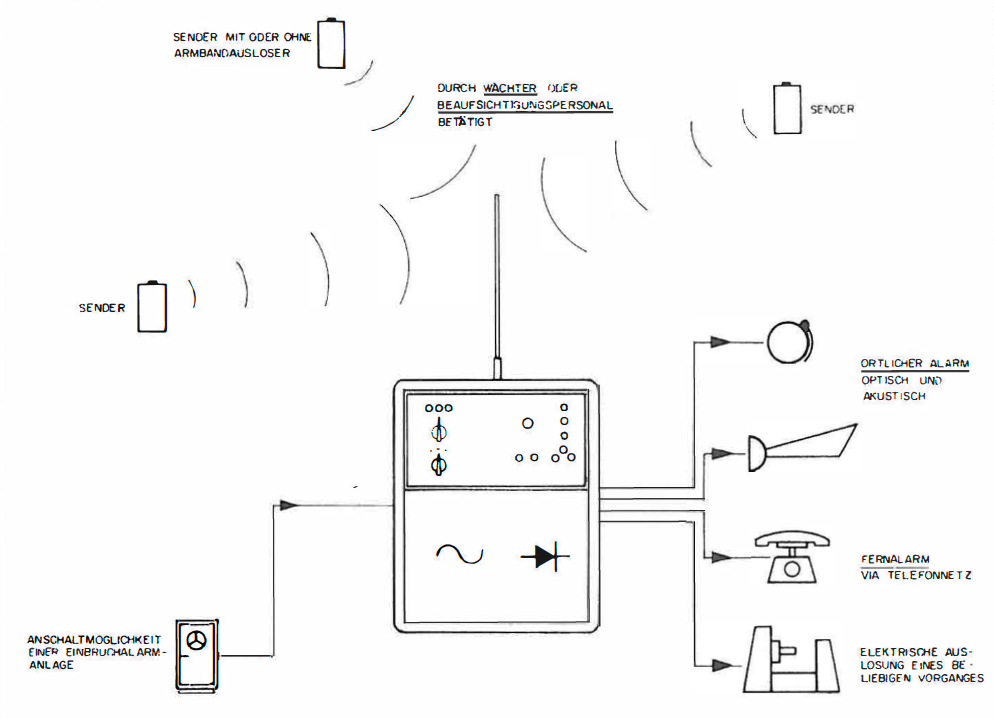 The diagram above describes perfectly how the system worked. The Securiton watch with an integrated alarm trigger was connected through the transmitter to the mobile cooperation unit called Bleep-System. It can operate not only existing local alarms but also works as a connection to activate distant alarms or alert reserve forces.

Securiton under the loupe

The Securiton watch is surprisingly dressy, and I can’t help but notice that it has a bit of vintage Heuer Carrera flair. The silver sunburst dial adds to its elegance, as do the slender black stick hands. Really, it’s nothing special, just a perfectly legible watch with applied indexes and no numbers or lume. It’s only the strict sound of the Securiton branding that doesn’t really fit the sleek dial attire.

The crown sits in an unusual position at 4 o’clock. But when the Securiton watch is hiding slightly under a cuff, it looks like a standard watch. I guess it was the goal to hide the additional “spy” elements on the right side of the case. There are two pinholes at 10 o’clock and a quite bizarre wire. Well, it looks weird only if the Securiton watch is worn without the cable connecting it to the transmitter. A thin but sturdy wire has a special bent shape that aids in connecting the cable and prevents it from disconnecting when moving your hand. 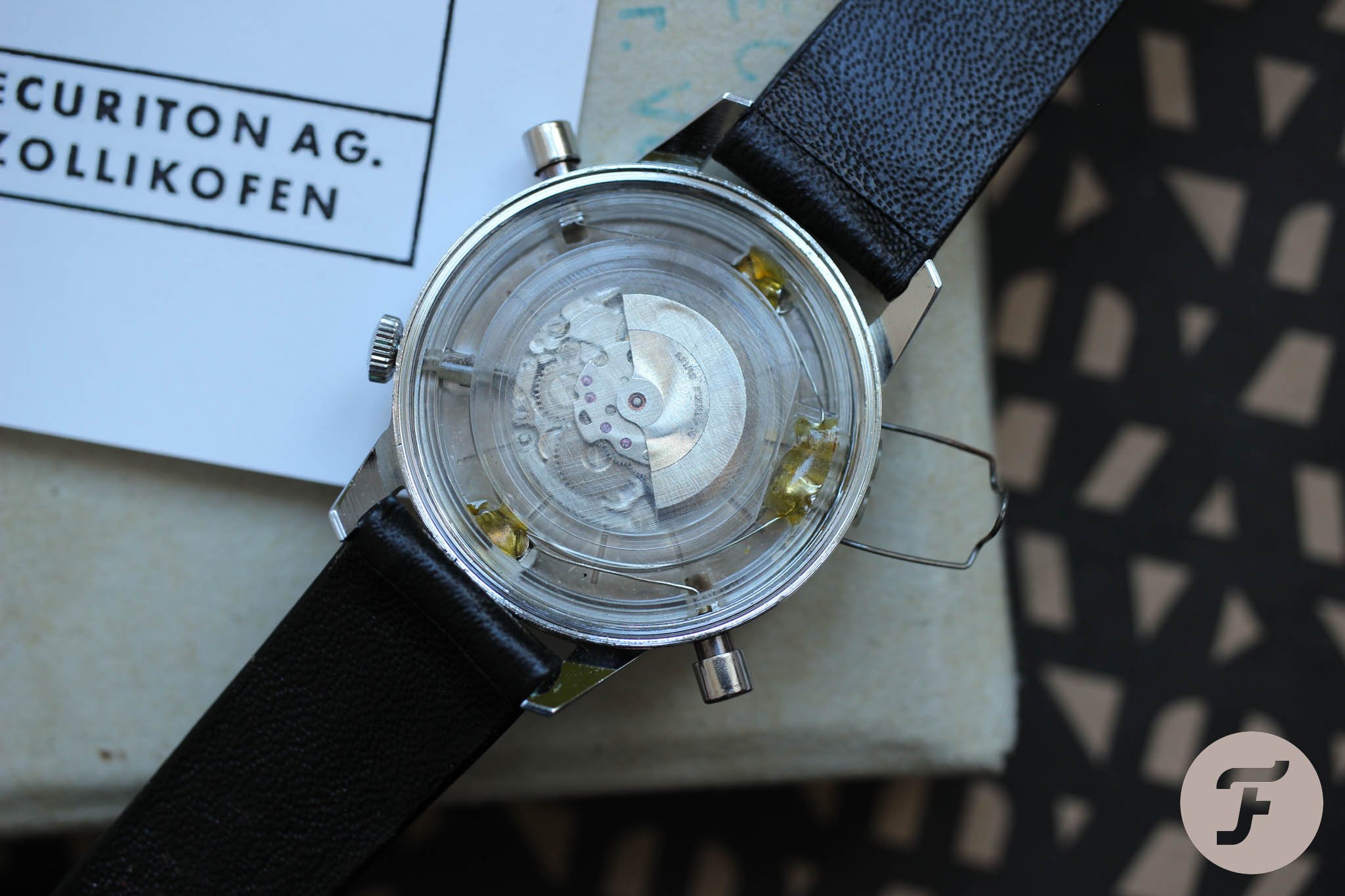 Once you remove the case back, you will see a special frame made of transparent plastic. In the middle, there is a plastic cap, which opens to allow access to the movement. I didn’t manage to identify the caliber, although, to be honest, I didn’t try all that hard. In the area between the movement and the case, you can clearly see wiring going from the pushers to the transmitter cable pins. To trigger the signal, you have to press both pushers at the same time. And that’s it. 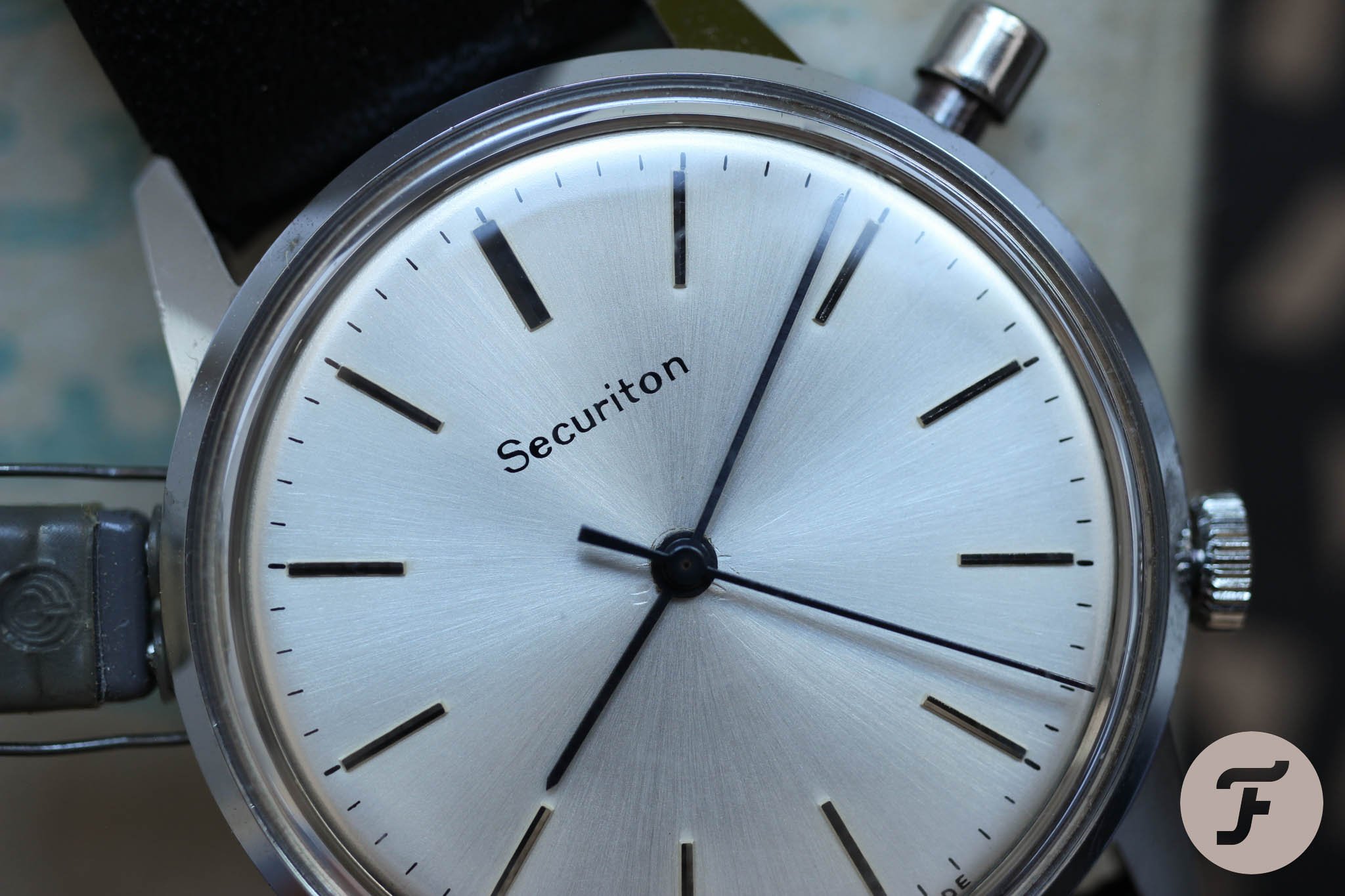 Final thoughts on the Securiton watch

Will I wear the Securiton with the cable wrapped around my arm? Well, I’m guessing that I probably will not. But I will definitely sport the Securiton watch from time to time. The idea that I have a legitimate tool that someone would usually only see in the movies amuses me. Besides that, the 37mm Securiton wears well and looks nice on the wrist. I’m happy that the realm of vintage watches still has utterly surprising stories waiting to be discovered. And for the sake of our beloved #TBT column, I hope they will keep popping up again and again. Happy hunting!

Special thanks to Yves for letting this treasure go to my hands.