It was at least a couple of years ago on an evening that I found myself cruising the internet. I did the normal thing: news, watch sites, eBay, and some dealer sites. At the time, Menta Watches, a watch dealer, was just beginning, but they had already begun featuring some neat watches. Amongst all the chronographs and Rolexes, it was a weird, and admittedly plain, watch that caught my eye. And while I was late to the party and the watch was already on hold, the Wittnauer 8025 had left an impression. 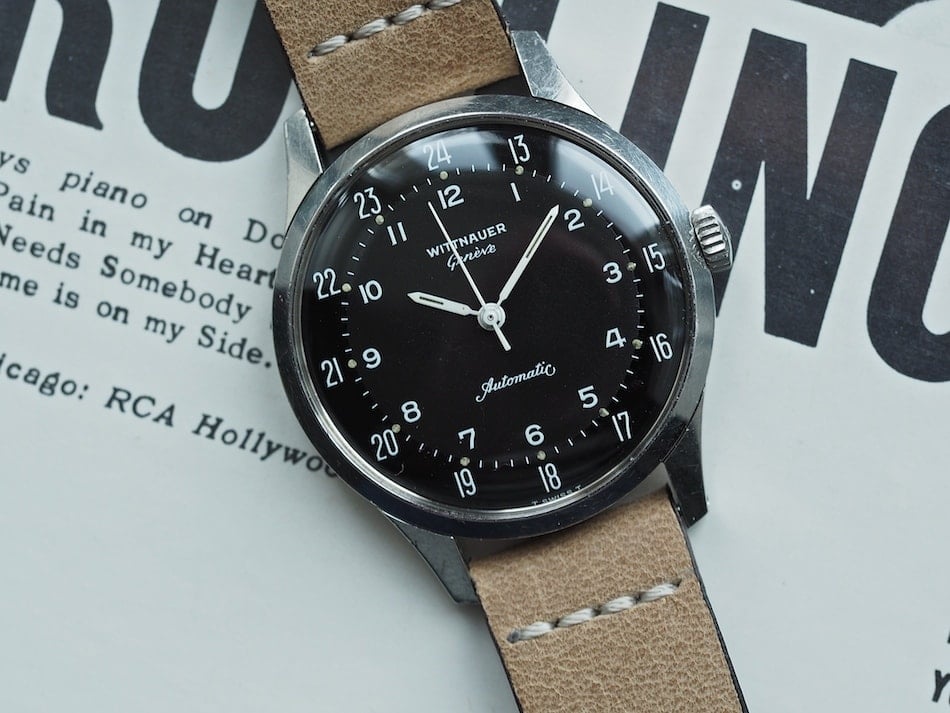 When I first spied the Wittnauer 8025, I had just come off of buying an example of one of the brand’s fantastic chronographs, the 242T. This led me down a path of looking into the brand’s history. I’ll be honest; there were a lot of “nice” looking watches, but the majority were typical 40’s and 50’s dress watches of small diameter. Then, I looked into military style watches from the brand and found some really compelling white/silver-dialed watches from those same decades with robust little cases and 24-hour dials. But…the watches were small. 34mm was often the largest and 32mm was more typical. I found some nice looking 60’s divers and even a dual-crown Super Compressor, but that was about all – until I saw that ad on Menta. 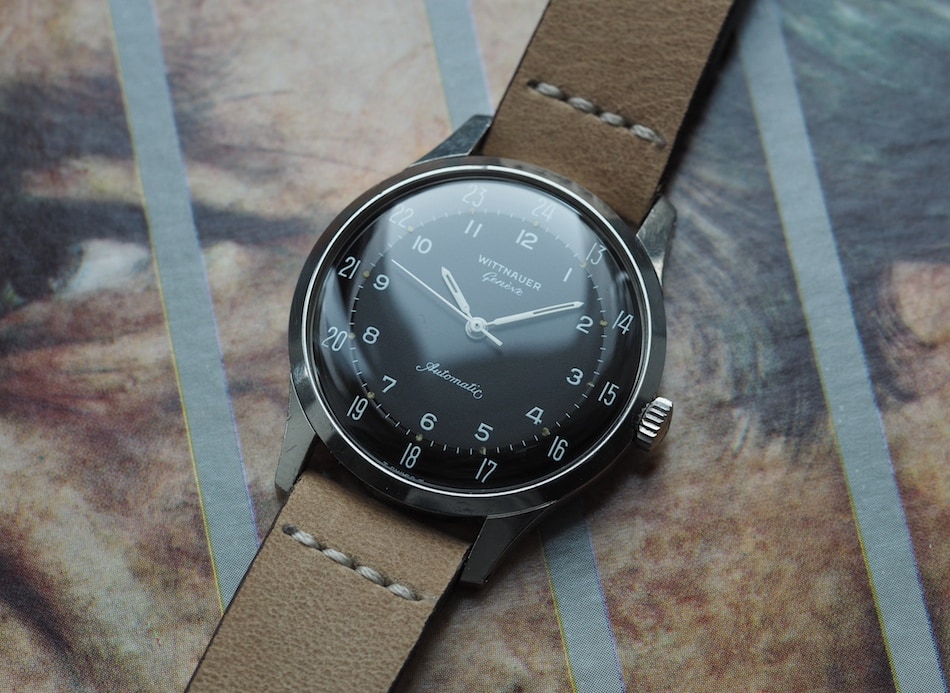 I think it ended up taking nearly 18 months until another Wittnauer 8025 popped up and this time it was on eBay. The watch was advertised as one that stopped and started and it definitely needed a new crystal. Some of its bulbous lume pips – which ape those found on the Wittnauer 242T – were advertised as partially gone, but the case, dial, and hands looked good. The seller accepted a best offer and I retrieved the watch a few months ago. It ran well, but the watch stopped running on account of a slightly bent hand. After spending some time in service, the watch returned and I’m happy to say that it’s a real looker. 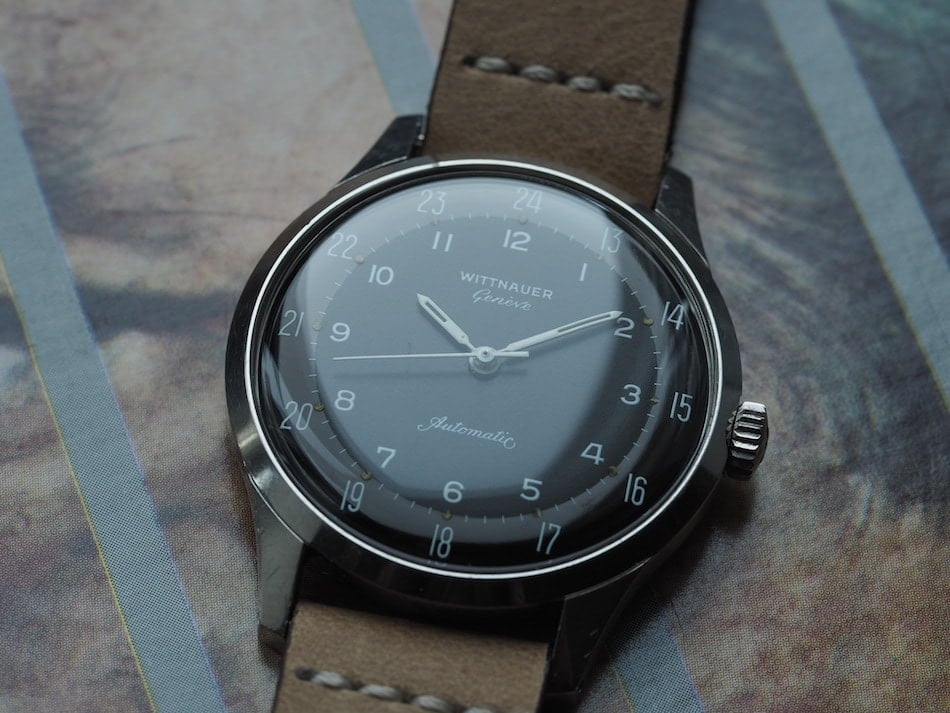 The Wittnauer 8025 is a relatively simple watch, but it’s distinctive. It sports a 36mm stainless case with a slim domed acrylic crystal. Its dial, head on looks like a simple back affair that’s jazzed up with some military-esque white numerals for hours 1-12 on the inside of those plots and corresponding 13-24 on the outside. White hash marks help separate those numbers. Tilt the watch slightly, though, and some subtle magic kicks in because the Wittnauer folks decided to use a matte surface for the central area of the dial and gloss black around its circumference. It’s a wonderful detail that adds a lot to the watch. 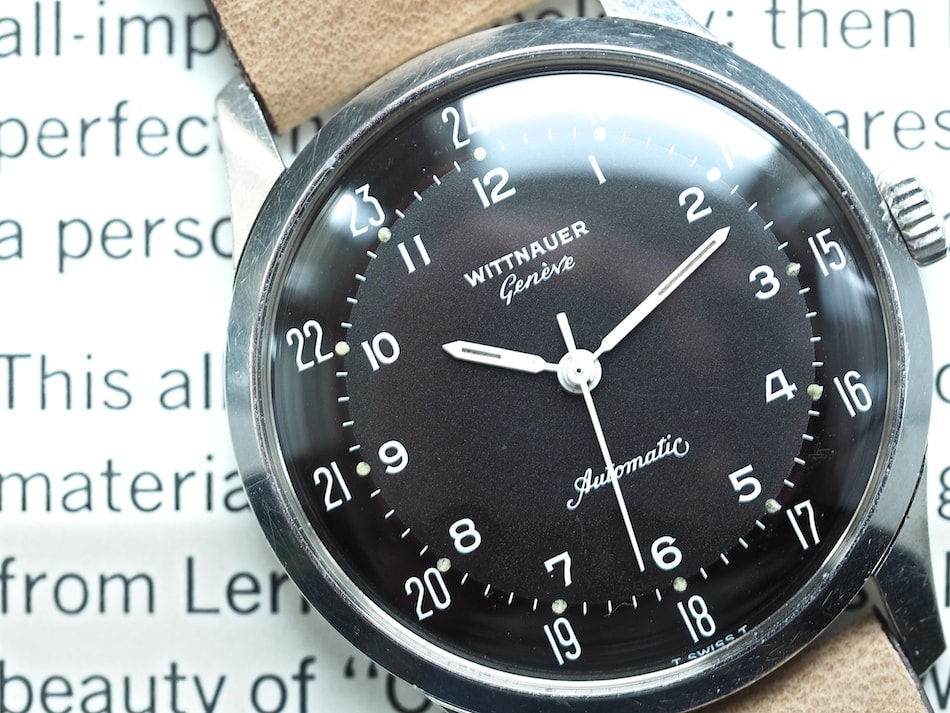 Other cool details abound on the Wittnauer 8025 such as some truly small white lumed hands. The minutes hand, oddly enough, doesn’t extend all the way to the hash marks, but the look works primarily because the hands match the font color. 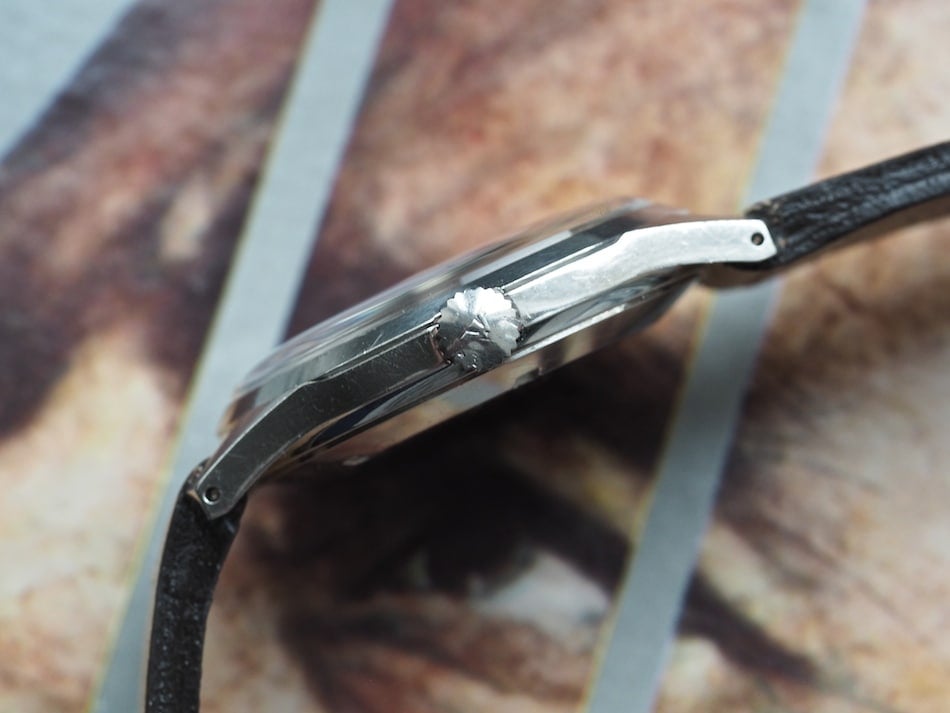 Moving on, the Wittnauer contains a signed “W” crown and a screw-down case back. And finally, to complete anyone’s wish list, 18mm straps are easily fitted due to drilled lugholes. 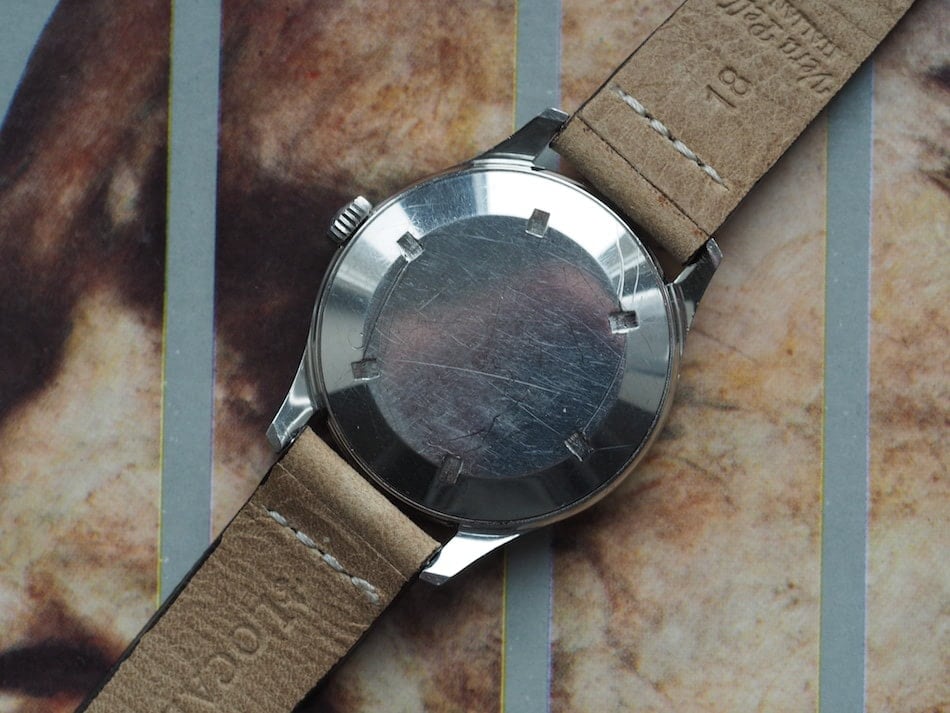 As noted on the dial of the Wittnauer 8025, this watch contains an automatic movement. The watch movement is signed as the C11KAS, which is also known as the Record 1955/Longines 501. It contains 17 jewels, can be handwound, and beats at a leisurely 19,800 bph. By 1950, Longines owned Wittnauer, so the movement usage makes some sense.   It seems to be a good runner that was thankfully easy to service. 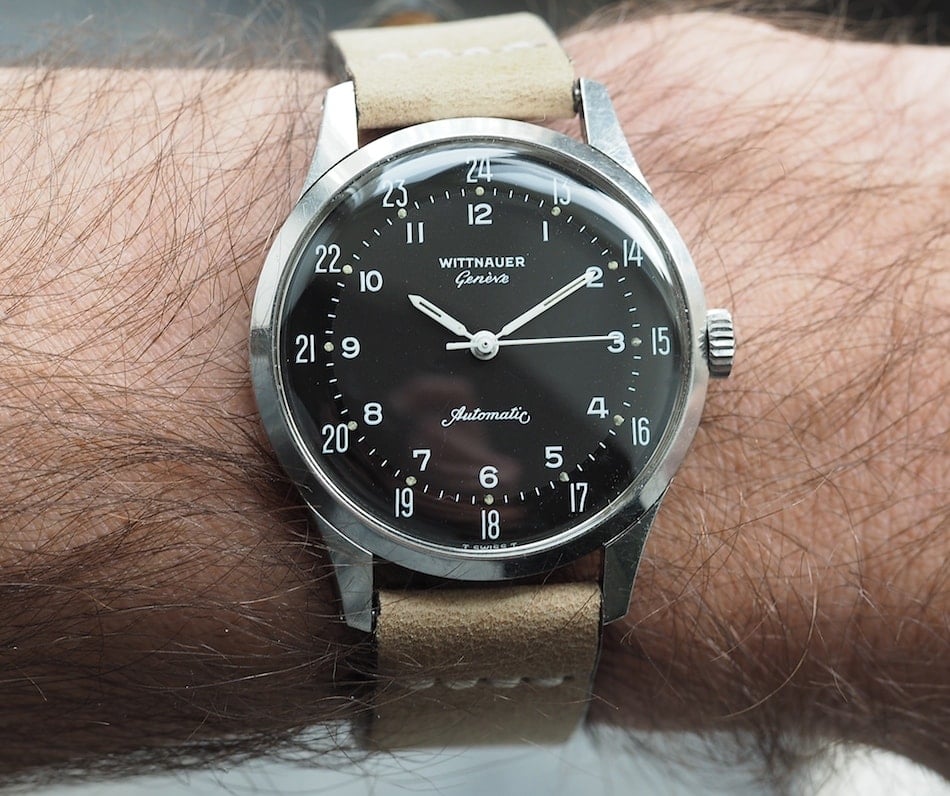 From a wearing perspective, the long lugs of the Wittnauer 8025 make this watch wear more modern than 36mm would suggest. However, its slender 9mm thickness makes it easy to wear under a cuff and, depending on the strap employed, gives it a dressier profile. As a simple no date black and white piece, this watch even competes as a less expensive Rolex Explorer 1016. 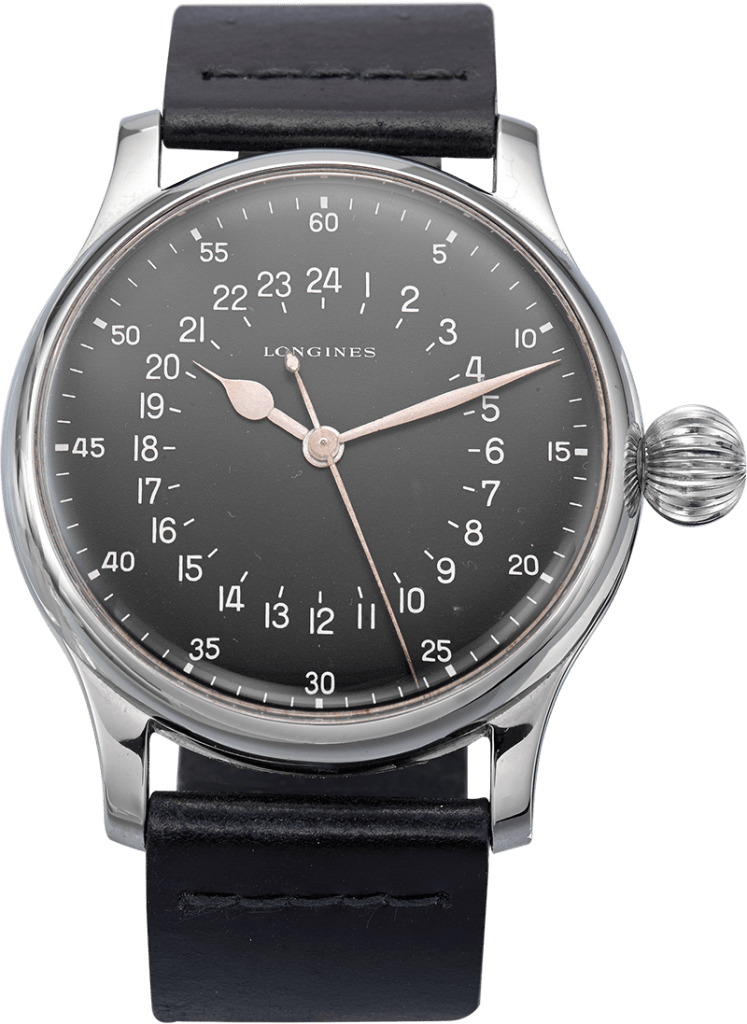 And back to the Longines link, is there one? Well, we’re glad you asked because the Longines Swiss Air of the 1950’s certainly bears more than a passing resemblance to the Wittnauer (the picture above is from Swiss seller Davide Parmegiani); even the font is almost exactly the same. 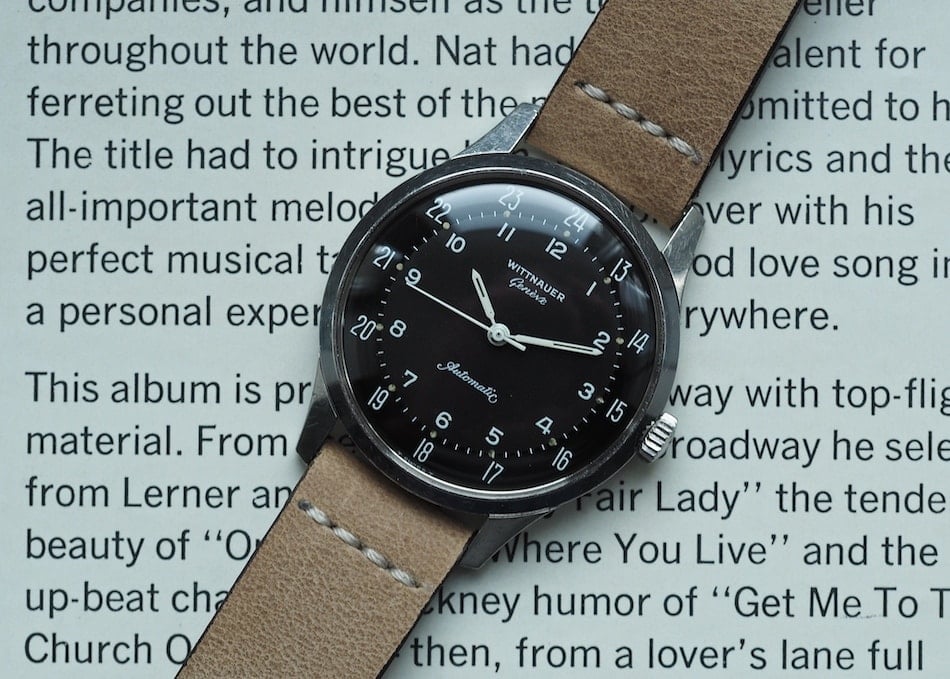 A positive regarding the Wittnauer 8025 is that it won’t cost tens of thousands of Euros to own like the Longines. Examples typically trade in $1,000 – 1,500 range and I’d say that makes this watch a serious bargain. Black-dialed, military-like watches from this era are simply rare and the Wittnauer is no exception. They come up rarely and I’ve only come upon a handful during my time of collecting. So, be patient, and hopefully you’ll be rewarded with an affordable addition. 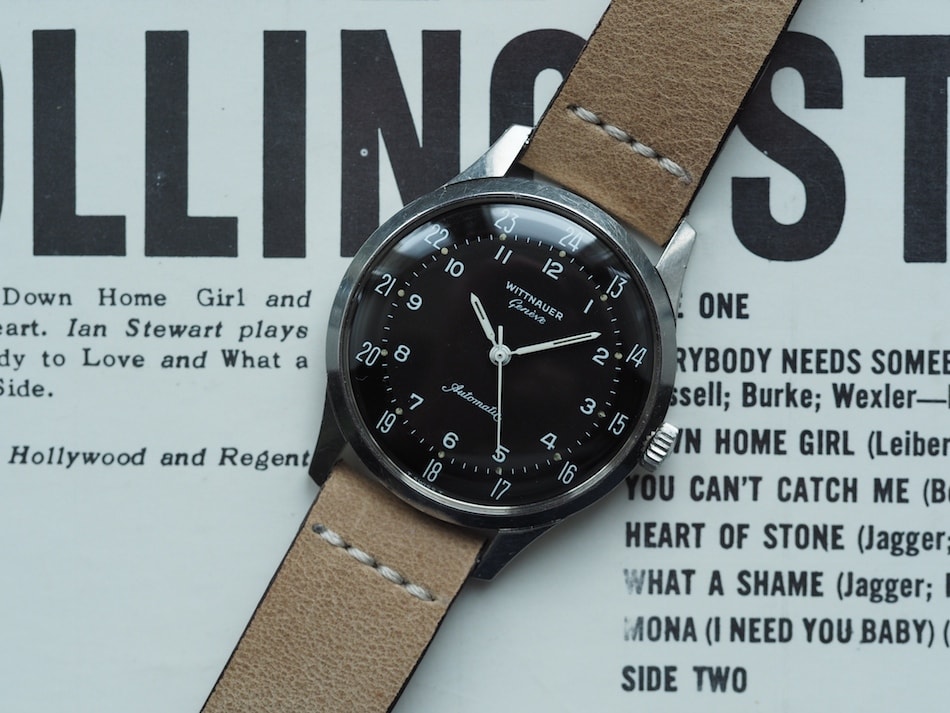 As we always like to point out, just when you think you’ve seen everything, there’s always another watch out there to spark your interest. For me, the Wittnauer 8025 was one such piece. I can see this one getting a lot of wrist time in the future.