“If all tanks were made by Cartier, we’d have the time to live in peace.” Such were the famous words of French designer Jean-Charles de Castelbajac. He’s so right. Everybody prefers a (boring) life of peace over the horrors of war. Cartier’s Tank is like a gun with a flower in the barrel. And of all the Tanks that Cartier built, the Cartier Tank Louis Cartier is probably THE Tank. It followed the Tank Normale in 1919, and it was the second Tank that Cartier launched. Even in its modern guises, the watch is still relevant today.

All Tanks in the Cartier collection stem from the same idea. The design takes inspiration from a Renault tank in service with the French Army during WWI. Imagine looking at a battle tank from above. Now look at the Cartier Tank Louis Cartier, and you see the two parallel brancards — the vertical bars that run along each side of the case, seamlessly integrating with the strap. These are the war machine’s tracks. The Tank Louis Cartier, or the LC Tank as collectors and connoisseurs like to refer to it, combines straight lines with smooth, rounded edges. According to Cartier expert George Cramer, the LC Tank is the “King of Tanks,” and who am I to argue with that? The secrets to its success are the refined proportions and the emblematic dial, of course. And prominent figures like Andy Warhol, Jackie Kennedy, Yves Saint Laurent, Calvin Klein, and Frank Sinatra all loved and wore the LC Tank. 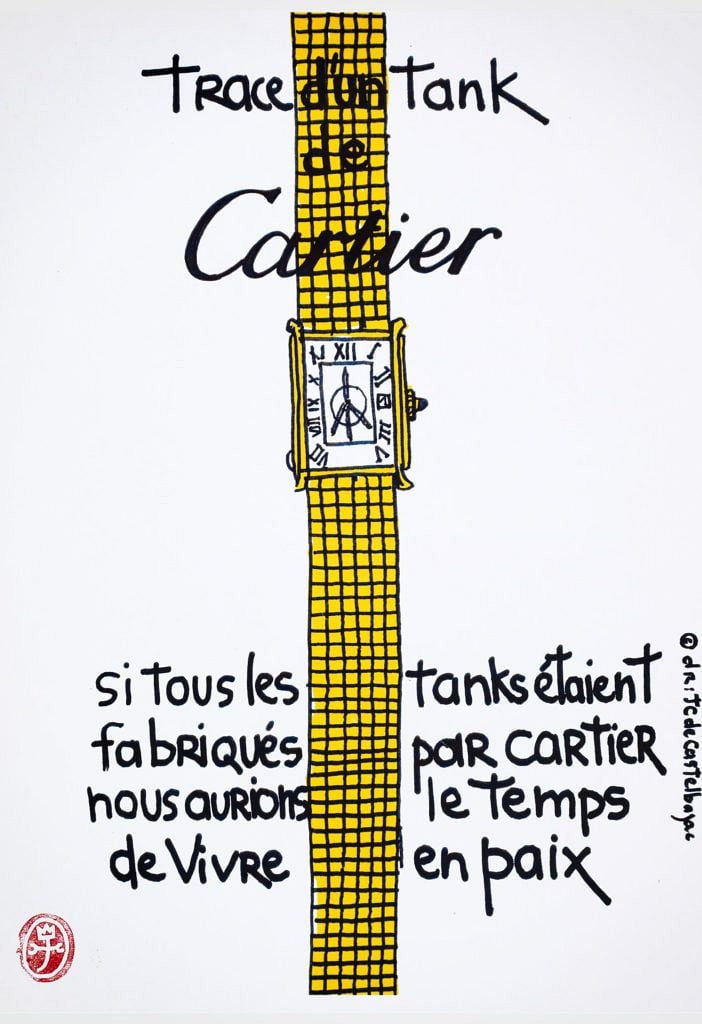 The LC Tank is a pillar of longevity and original design. It ticks all the Cartier boxes, as it’s elegant, distinct, and timeless. Sure, there are more daring versions of the Tank, but the Tank Louis Cartier, with its mechanical or quartz time-only caliber, is just a very straightforward, good-looking watch. Exclusively built in precious metals and always set with a sapphire cabochon, the Tank Louis Cartier is a statement of style, refinement, and culture. The Cartier Tank Louis Cartier won’t blow you off your feet. Instead, it will tell you a non-verbal story of savoir-faire and joie de vivre. 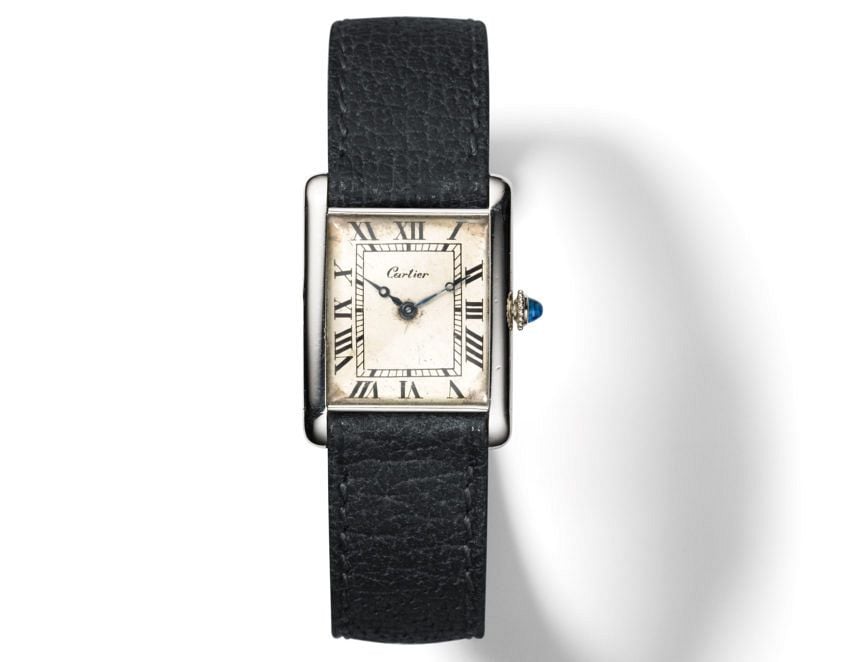 The Tank Louis Cartier is a timeless object often worn by industry leaders and fashion designers. People with a sense of style herald its strong but unobtrusive design, which is instantly recognizable without being forceful. The shape of the case lays the foundation of the Tank, and the silvered dial with Roman numerals, a railroad-track minutes ring, a guilloché center, and two blued hands complete the iconic look. 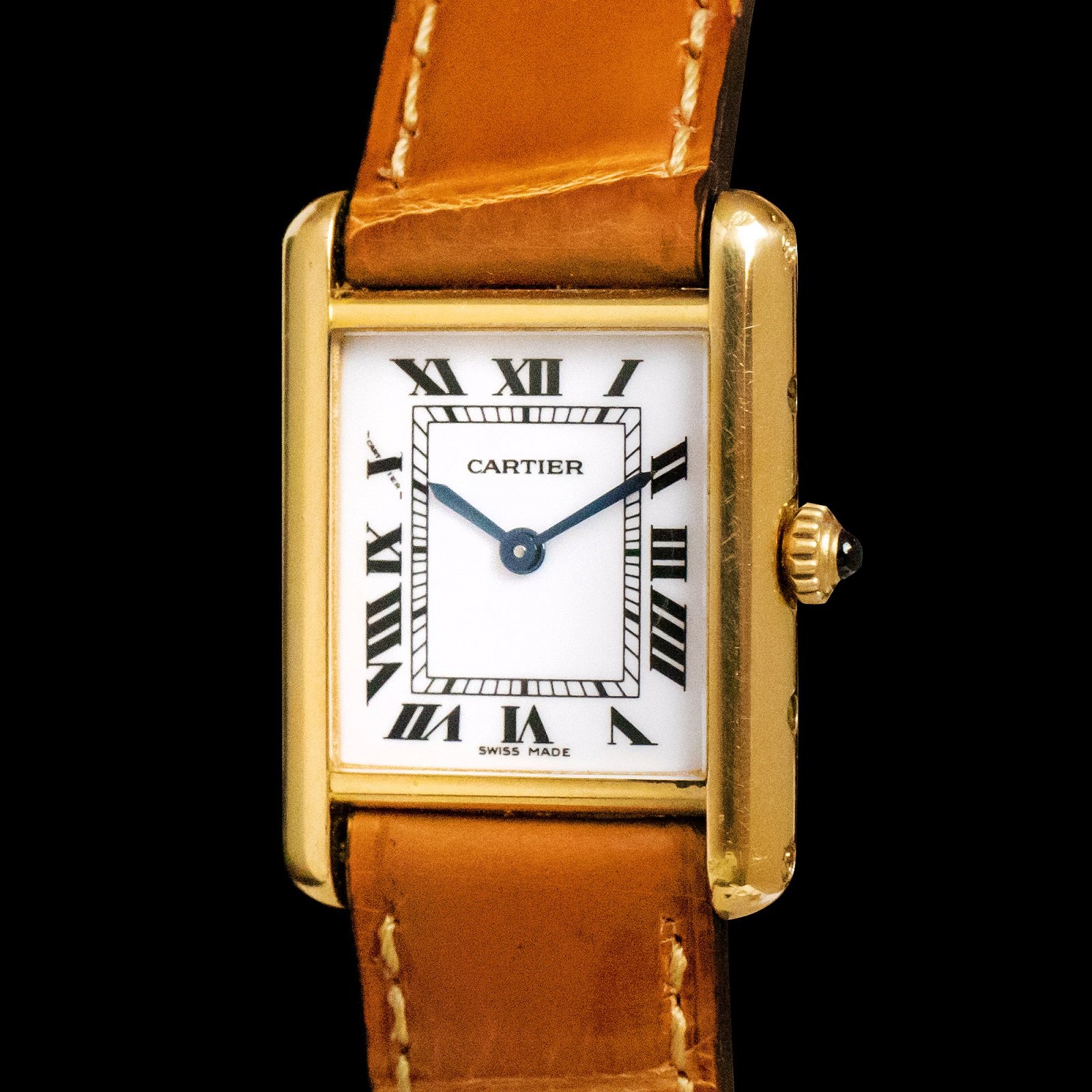 The movements of Tanks

Since its inception in 1919, the Cartier Tank Louis Cartier has seen an impressive number of variations. Different sizes, different types of gold, different types of bracelets, you name it. There are just too many to mention here and some are very rare. Some of the most common versions of the Tank Louis Cartier from the ’70s were equipped with the famous caliber 21 by Frédéric Piguet inside the 33.5 x 25.5mm case. These are stylish masterpieces with a caliber that also speaks to more movement-oriented watch lovers.

… the core version is, and always will be, an LC tank with a hand-wound movement.

Speaking of movements, Cartier also released an automatic version of the LC Tank in a slightly larger case, powered by an ETA caliber. The brand released several quartz-driven models as well. But the core version is, and always will be, an LC tank with a hand-wound movement. 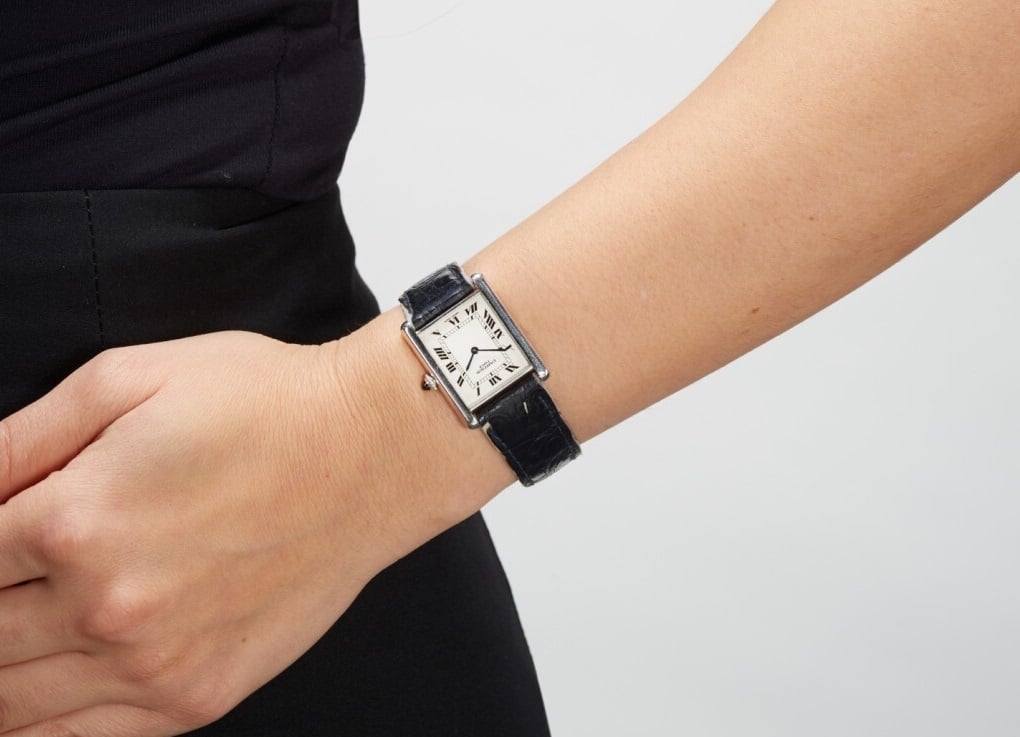 The allure of precious metals

The everlasting allure of the Louis Cartier Tank is its untouchable design. But it’s also the fact that the LC Tank is a strictly precious-metal creation. From yellow gold to white gold, pink gold to platinum, the choice is yours — but just not in steel. As with its timeless design, this exclusivity also helped to create an image of superior refinement.

As a counteroffensive, Cartier deployed an XL version of its senior model.

A funny story, however, is the introduction of the 30 x 39.2mm Cartier Louis Cartier XL in 2006. Big watches dominated the world of horology, and sales of the LC Tank were dropping. As a counteroffensive, Cartier deployed an XL version of its senior model. It was outfitted with the beautifully decorated rectangular Caliber 9701MC — a hand-wound caliber created by Piaget, but reworked and finished by Cartier. Just two years later, Cartier retired the watch after building 250 pieces in pink gold and just 50 in platinum. Bigger Tanks aren’t always better. 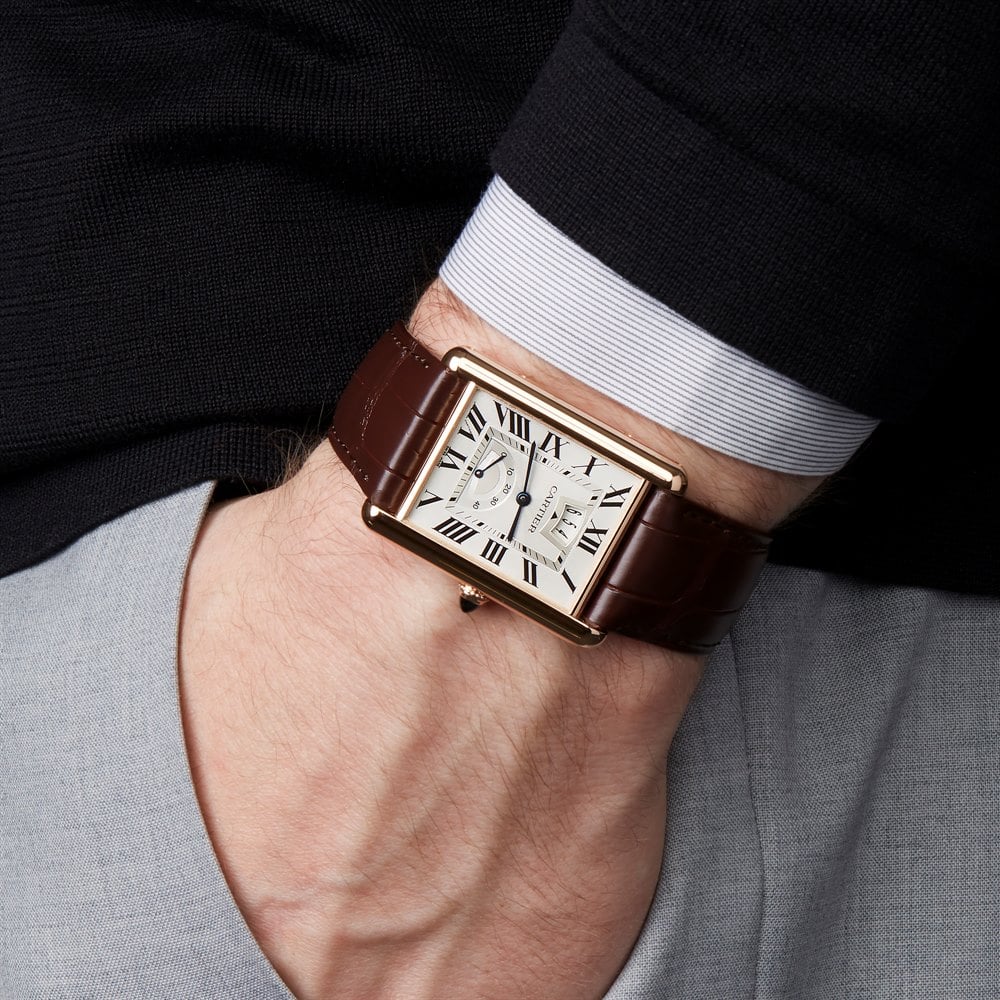 More sizes and variations of the LC Tank

Despite the not overly successful LC Tank XL from 2006, in 2012, another XL version entered the market in the shape of the LC Tank XL Extra Flat. Was flatter better when it came to Tanks? The new XL measured 34.9 x 40.4mm and only 5.1mm in height. Inside the pink gold case, Cartier put the hand-wound caliber 430MC, based on a delicate Piaget movement. This watch, like the previous XL, is no longer in production. But with a mix of classic design and a more contemporary size, it still looks attractive in 2021. I don’t know if I can say the same about the skeletonized version of the LC Tank, which also debuted in 2012. 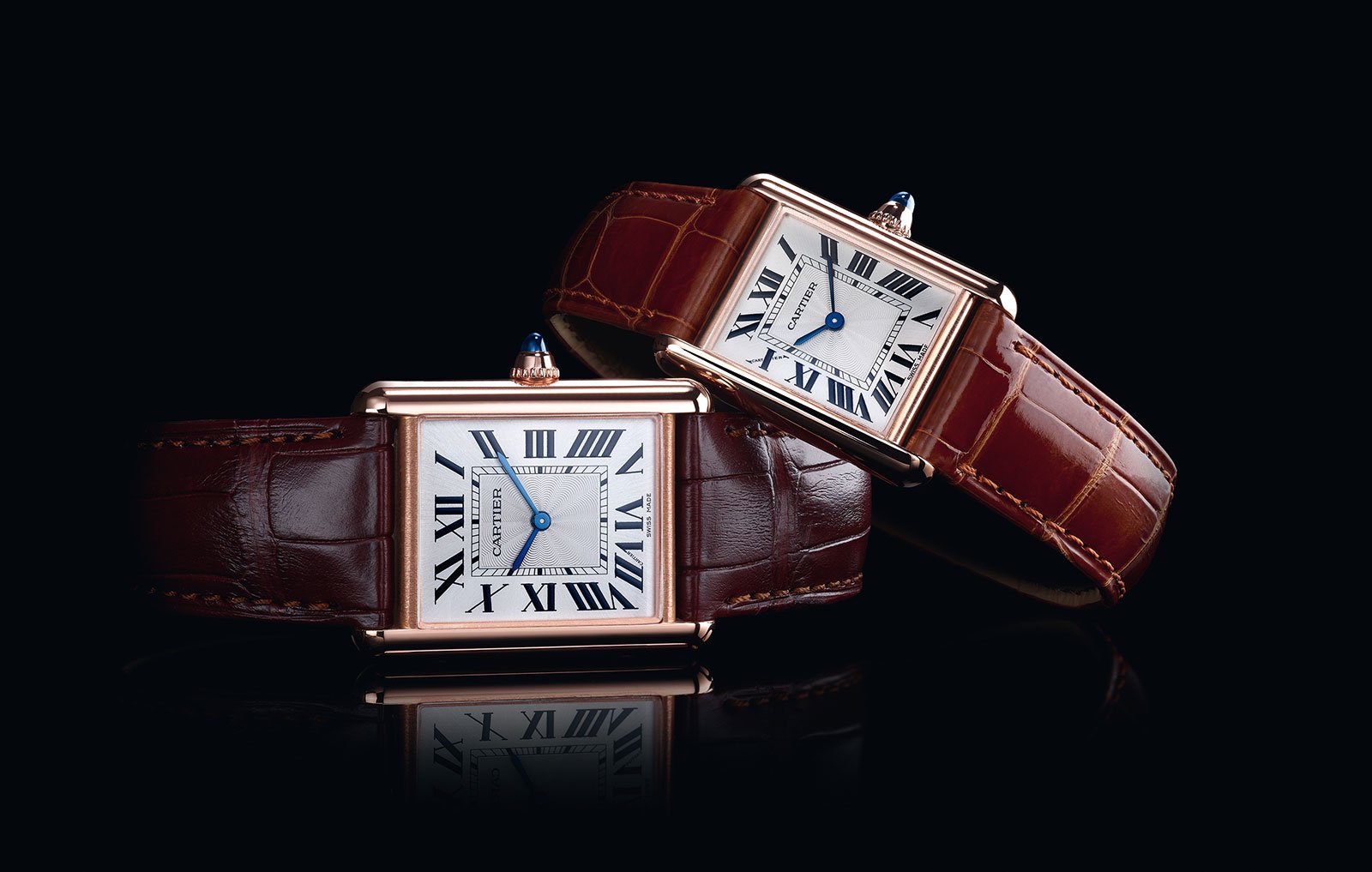 Powering the Tank Louis Cartier: by battery or by hand?

In the current collection, you will find 13 different references of the LC Tank. The yellow gold Large model measures 33.7 × 25.5mm and has a height of 6.35mm. This €10,600 quartz watch with a date at 3 o’clock, is the largest entry-level version. The €13,300 pink gold Large model, however, is a bit more “serious,” with the in-house, manually wound 8971 MC inside the 33.7 × 25.5mm case. It also lacks the date window at 3 o’clock, giving it a very clean look. A nice touch is the semi-matte brown alligator strap that adds sophistication to an already stylish timepiece. 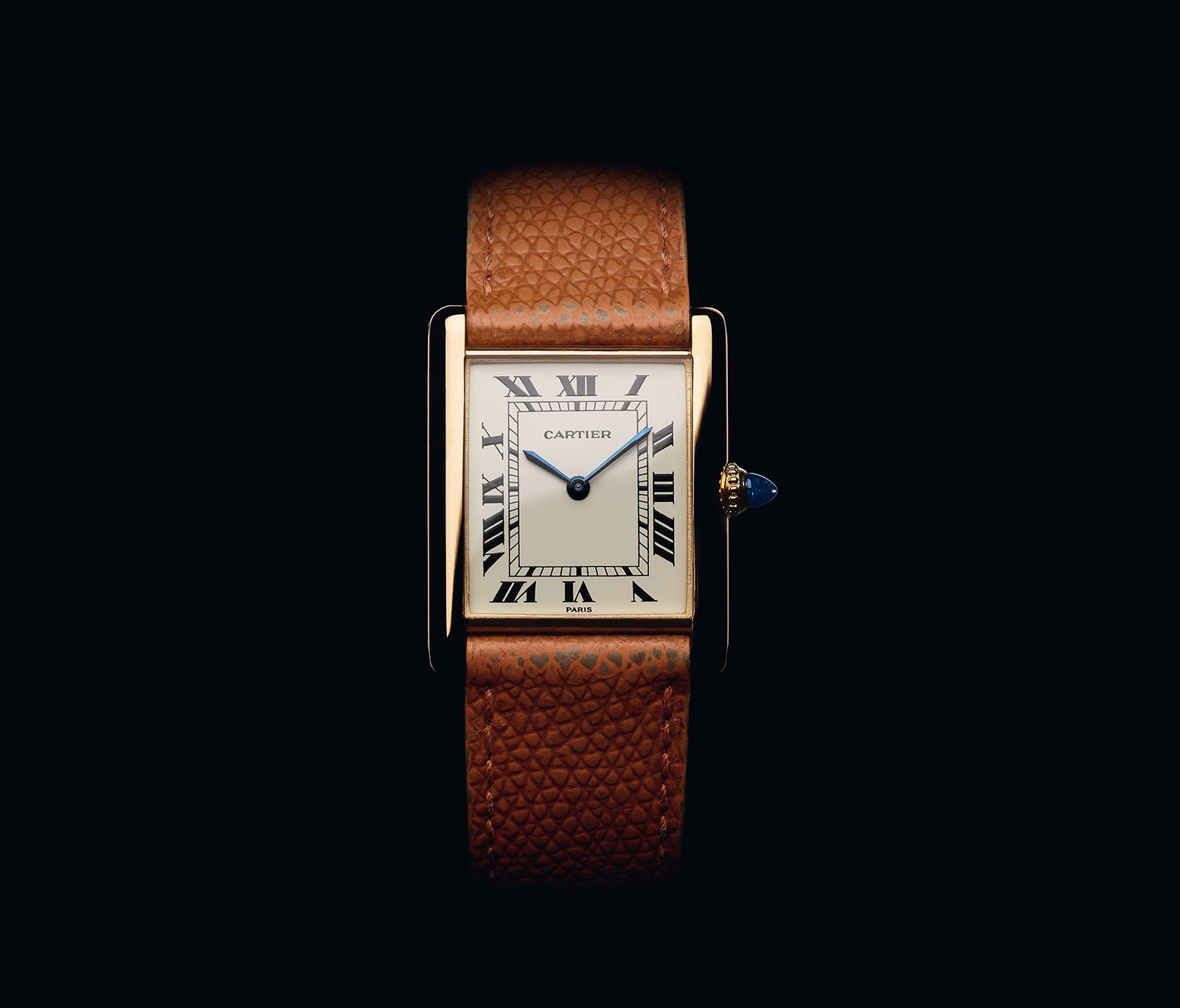 A Tank Louis Cartier from 1977

The LC Tank is not the most popular Tank in the line-up. That has to do with the fact that it’s an exclusively precious metal watch, but also its understated appearance. It’s not as distinct as a Tank Américaine. But although the Louis Cartier Tank will never be as popular as a Tank Must or Tank Française, it is without a shadow of a doubt, the most essential Cartier Tank. It’s a historic piece that’s alive and kicking. It’s a bit like a dinosaur roaming the earth — an impeccably stylish dinosaur, drinking from the fountain of youth and with a strut in his step.

You can find more information on the Louis Cartier Tank and all other kinds of Tanks on Cartier’s official website.