A Tank, Is A Tank, Is A Tank was Cartier’s slogan in 2013 when the Tank Anglaise was released. There was a huge presentation during the launch, that featured all the Tanks models  that Cartier ever created. But there is only one Tank that is seen as the king of the collection, since there is one Tank that is the most accepted, most wanted, most copied and most admired Tank of all. But that does not mean that this is also the Tank that was sold the most, because actually the contrary is true.

I am talking about the Tank Louis Cartier, or the LC Tank as collectors and connoisseurs like to refer to it. With its smoother and rounder lines,  it followed the Tank Normale in 1919, and it was the second Tank that Cartier ever launched. It became the jewel in the crown of the entire watch collection of Cartier. 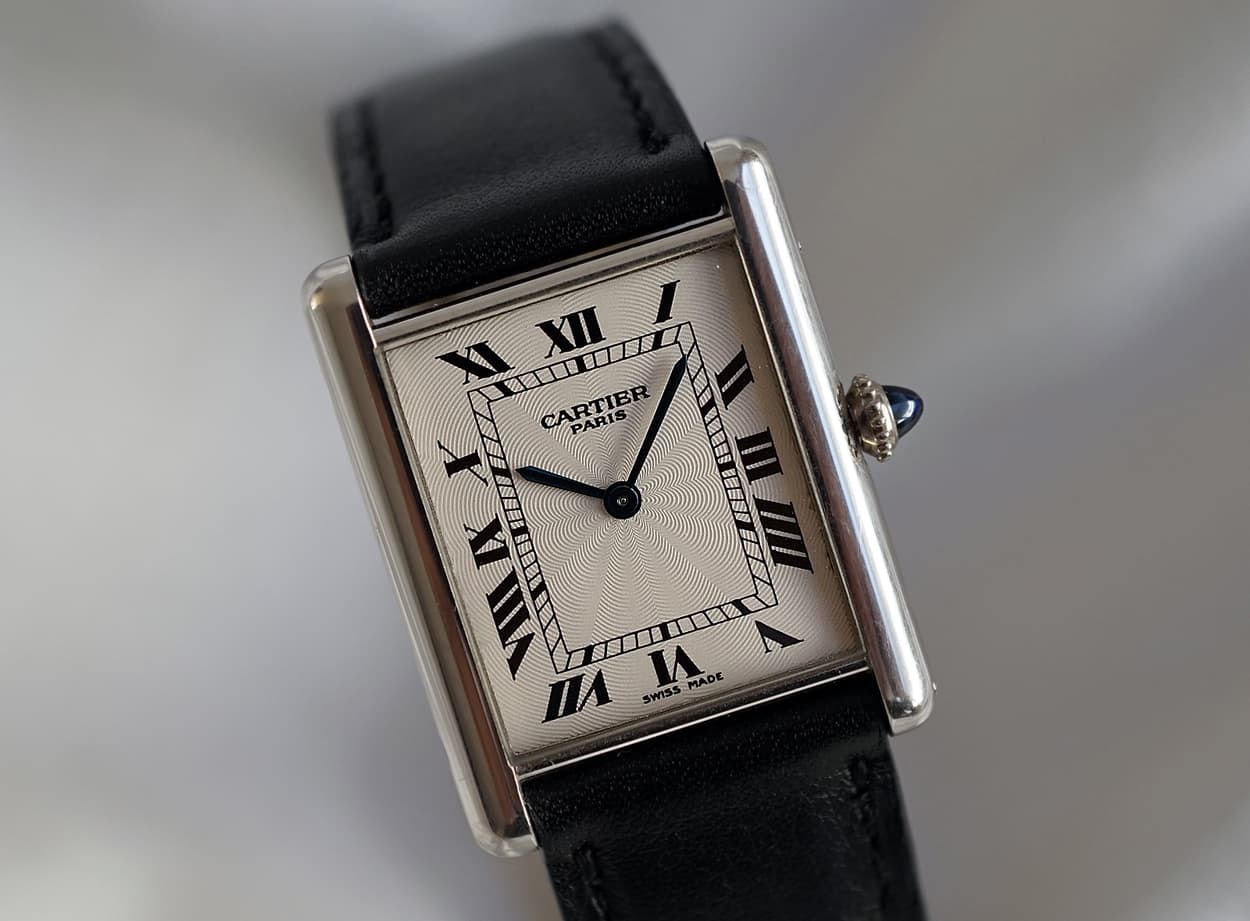 Yes that is quite a statement especially when we consider that there are many more Cartier watches, that are more high tech, offer more complications and, from a watch making point of view, represent the ‘creme de la creme’ that Cartier is offering today. While the Tank Louis Cartier with its mechanical or quartz time only caliber, is just a very straight forward, good looking watch. Exclusively build in precious metals and always set with a sapphire in the crown, the Tank Louis Cartier is a statement, like no other watch in the collection is. It is not only recognized by the Kings and Queens but also artists like Andy Warhol, Clarke Gable and Duke Ellington were often spotted with a Tank watch.  It is also often the watch of choice by those people who prefer to have only one watch in their lives, they wear the Tank Louis Cartier day in and day out and see their Tank as part of their personality. The Tank Louis Cartier is often seen amongst industry leaders, fashion designers and in general, among people that like to dress stylish and have a certain taste for timeless objects.

Let’s go back to the watch itself. The Tank Louis Cartier is one of those models that is around since its year of creation, 1919 and has, during the first years, been modified many times. It is impossible to mention all the variations Louis Cartier created in the thirties, in several sizes and with different types of gold bracelets, since these production runs were so small, that these pieces rarely turn up at auctions. So I will only highlight the ones that have been released on a wider scale, since the seventies, to begin with the one that is powered with the famous 021 caliber by Frédéric Piguet. The dimensions of the mens model are very small with 33.5 x 25.5mm and one really needs to get used and feel comfortable again, to look at a watch, that’s not larger than a stamp, but this really is the most common size for the mens model and this is what it looks like on a mens wrist. Cartier also released an automatic version of the watch with a lightly larger case and ETA caliber, despite the fact that it has an ETA caliber, the watch is very popular and sells really well in the second hand market. The same goes for the version with the quartz movement. Louis Cartier Tanks were and still are, produced in yellow-, white or pink gold and/or in platinum. 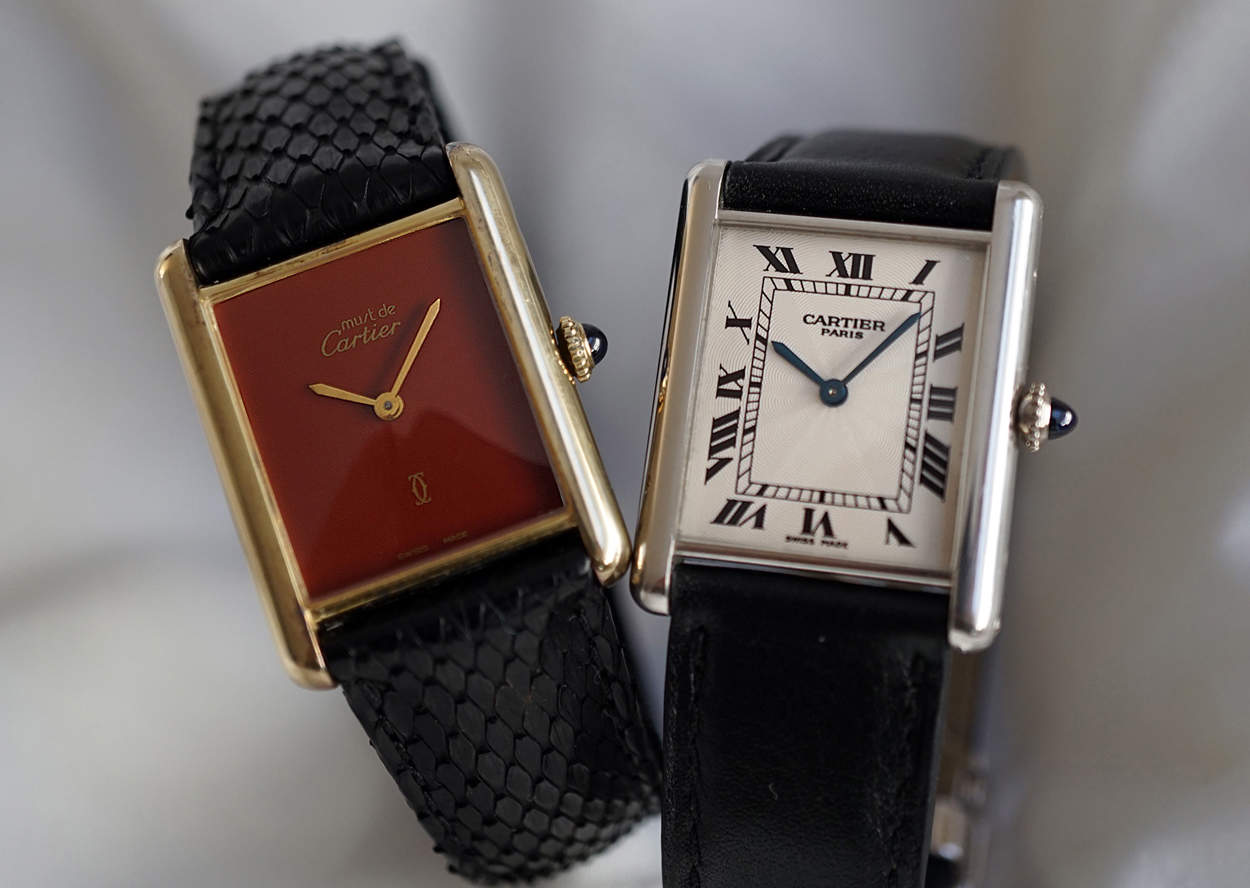 – Must de Cartier Tank and a Tank Louis Cartier –

There was however one exception, that I hardly dare, but need to mention and that is the ‘Must de Cartier Tank’ released in 1977. While it was never called and seen as a Tank Louis Cartier, it paid tribute to-  and did have all the DNA, as its famous brother. Of course the watch is much thicker since the Tank Louis Cartier is fitted with the ultra flat Frédéric Piguet caliber 21. Compared to what ‘La Maison’ has in the collection nowadays, it was a bit of an inferior product, due to the fact that these watches, had vermeil on Sterling silver cases, instead of 18K gold cases and because the ‘Must de Cartier Tank’ had an ETA mechanical or quartz movement, instead of the Frédéric Piguet caliber. But the ‘Must de Cartier’ collection that was presented with lots of different dial colors, generated a very good turnover for Cartier, at a time the Swiss watch industry was facing the (digital) quartz invasion, coming from Japan. This was a very smart move by Alain Dominique Perrin, at that time Managing Director of the company “Les Must de Cartier” and also the beginning of Cartier’s worldwide network of brand boutiques. 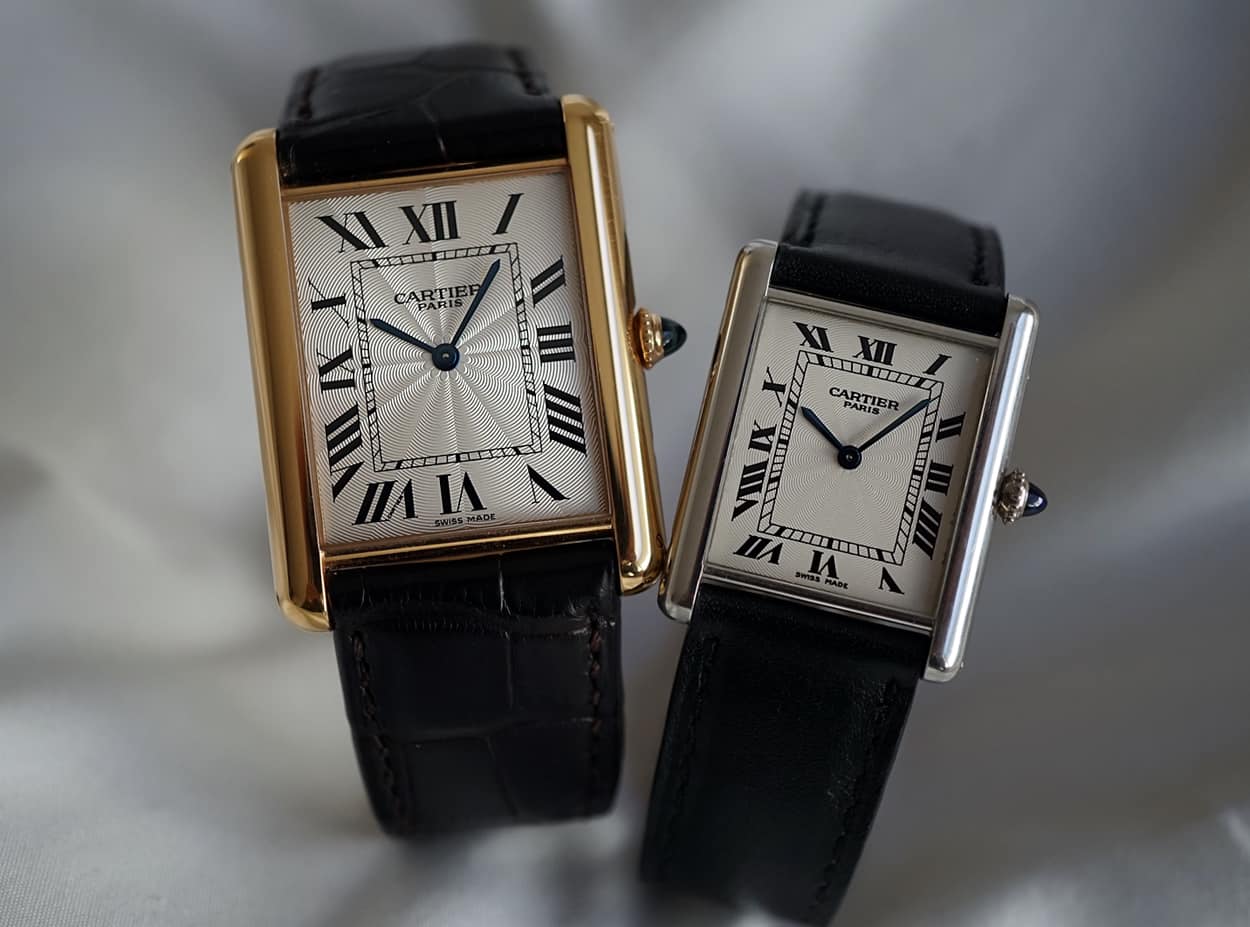 – Tank Louis Cartier XL and the version in original dimensions –

About twenty years later, around the commercial introduction of the vintage brand Panerai in 1998, the demand for larger watches was increasing. And the classic Tank Louis Cartier lost a bit of its popularity. Cartier had to do something and decided to release a larger version; the Tank Louis Cartier XL. It was released in 2006 and retired in 2008. Around 250 copies were made in pink gold and just 50 in platinum. 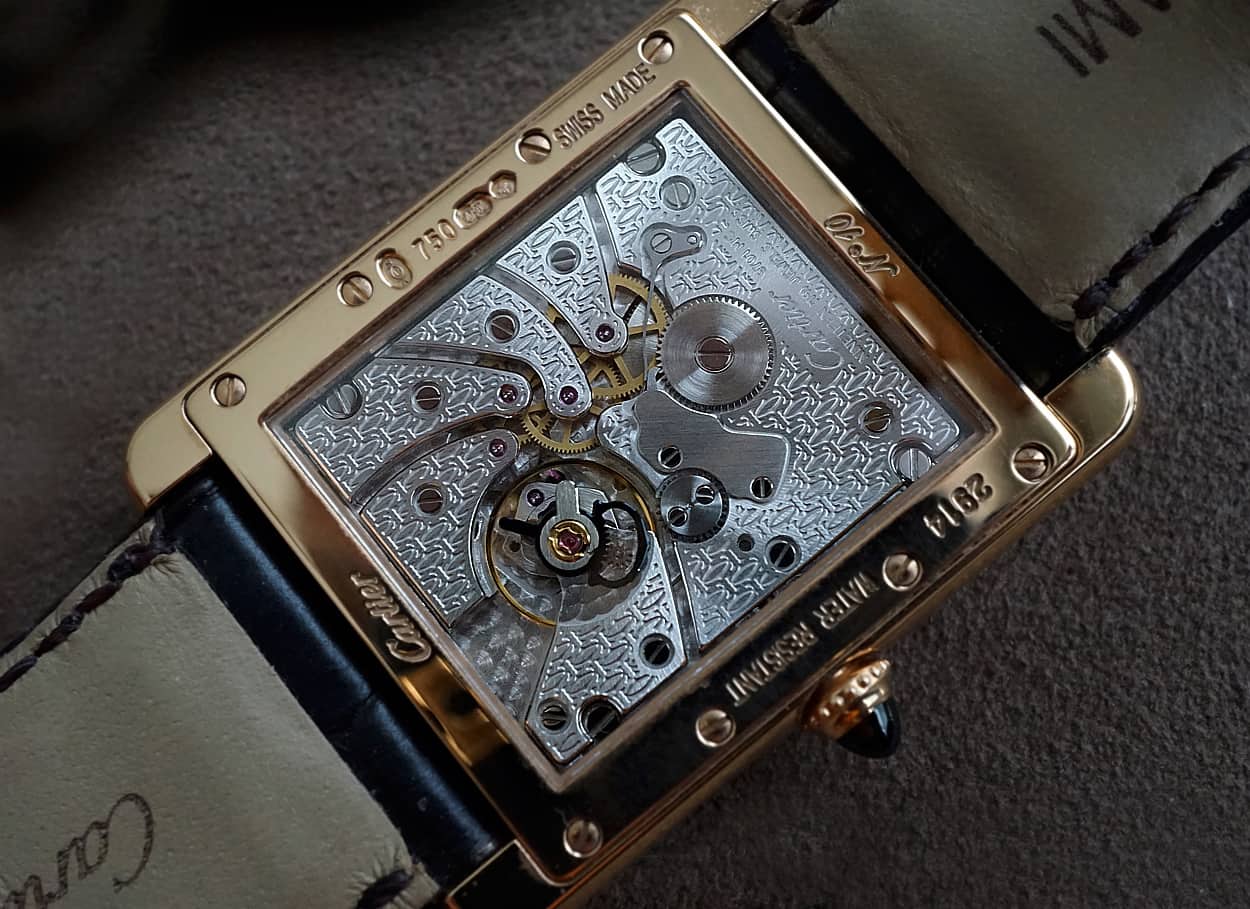 The back of this case was open and shows the very well decorated rectangle 9701MC caliber by Piaget, reworked and finished by Cartier. This model has a case measuring 30 x 39.2mm and it gives a complete different, but still classy look on the wrist, without looking ridiculously large. 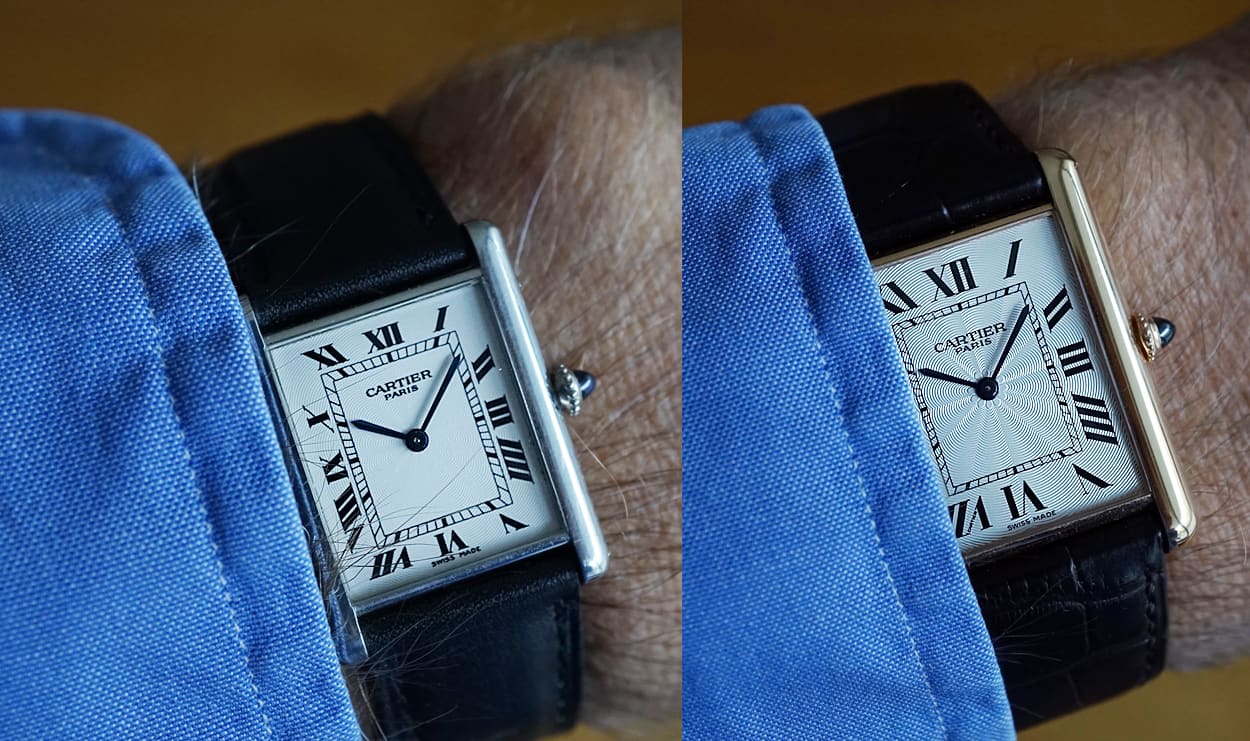 Currently this is absolute one of the most sought after Tank Louis Cartier models. A two timezone model and a calendar version were launched around this same period, both produced in small production runs and both not available anymore.

It took another five years before Cartier presented another addition to the legendary Tank Louis Cartier collection. With slightly different, mainly wider, case dimensions of 34.9 x 40.4 and only 5.1mm in height, the new LC Tank XL ,  is one of the ultimate mens dress watches in the current collection. 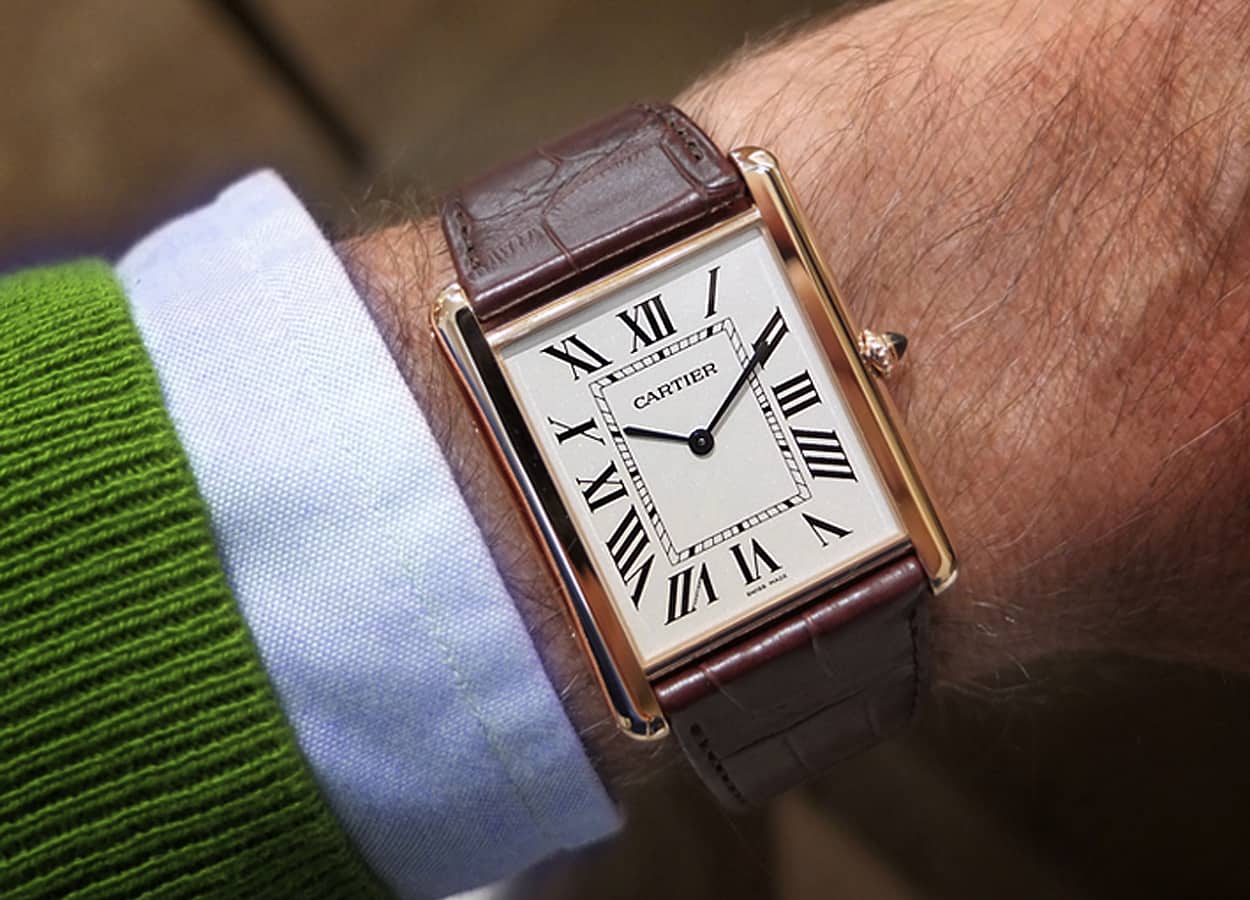 The ultra flat Piaget 430MC mechanical  caliber, was chosen to power the new model. While it was historical not exactly correct to release these XL models in pink gold, instead of the classic yellow gold, since this alloy was hardly used around 1912, Cartier anticipated to the demand for pink gold time pieces. Although the case became a bit wider than its pre predecessor, it also became much thinner, thanks to the Piaget 430MC caliber and the fact that the Cartier choose to release this model with a closed back instead of the display window, of its predecessor.

If you’re more a tech guy that loves the look of the Louis Cartier Tank, but find the watch too simple to add to your collection (of may be precious independent brands); read on! Over the years Cartier has build a stunning collection of skeleton watches. Transparency has been an integral part of the Maison’s style for decades, from the first mystery clocks created in 1912 to the skeletonized movements of the 1930s. The calibers of all these skeleton watches have however very little to do with the new Louis Cartier Tank  Sapphire Crystal, presented in 2014! 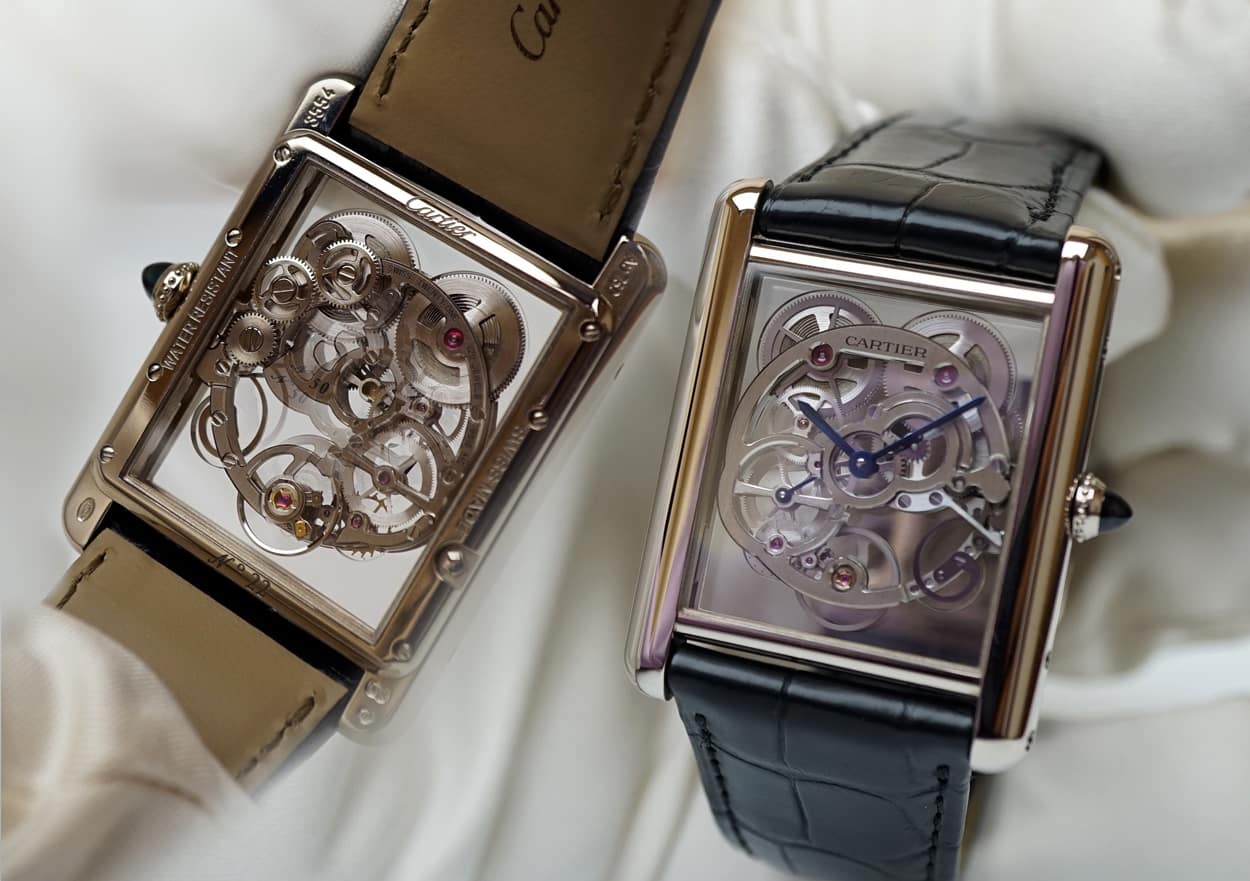 The, in the Cartier Manufacture in La-Chaud-de-Fonds, developed and build, hand-wound calibre 9616 MC, is made up of adjoining circles of metal, that appear to be suspended and trace the shape of the movement. A circular bridge gives structure to the circles and the harmony of the Tank Louis Cartier Sapphire Skeleton watch. The whole look and transparency is much more open than any other skeleton model, since the movement of the new Tank Louis Cartier seems to float in its case, due to the movement plates that Cartier made of sapphire crystal. This new standard for the watch industry,  is housed in a case measuring 30mm x 39,2 mm.

The Louis Cartier Tank may perhaps not be as popular as other Tanks in the line up, like for instance the Tank MC or Tank Francaise, it will always be the elementary Tank for the ones who know where Cartier came from and for those who know what Cartier’s watchmaking is today!