The Biatec Corsair – A Dressy Pilot’s Watch from Slovakia

As an American, and one who considers himself reasonably worldly, I have to admit that I get lost when it comes to identifying countries on a map east of Germany until one’s eyes hit the landmass that is Russia. It’s like the geographical enigma that is New England raised to an exponential level – yes I still struggle with that one too. And so I had to do a bit of cartographical research prior to the first date with my now wife when I found out that she was born and raised in the country of Slovakia. Yes, folks, it’s separate from the Czech Republic (you wouldn’t believe how many people still say “Czechoslovakia”) and if you’ve never been, it’s a beautiful and welcoming country. The topography is varied, the food and beverages are worthwhile and supermodels seem to roam freely. Watches, though, aren’t something that comes to mind when thinking about Slovakia. Due to my fondness for the country and my impressions of the watch online, I was excited to go hands-on with a piece proudly made quite near my wife’s hometown, the Biatec Corsair 05. 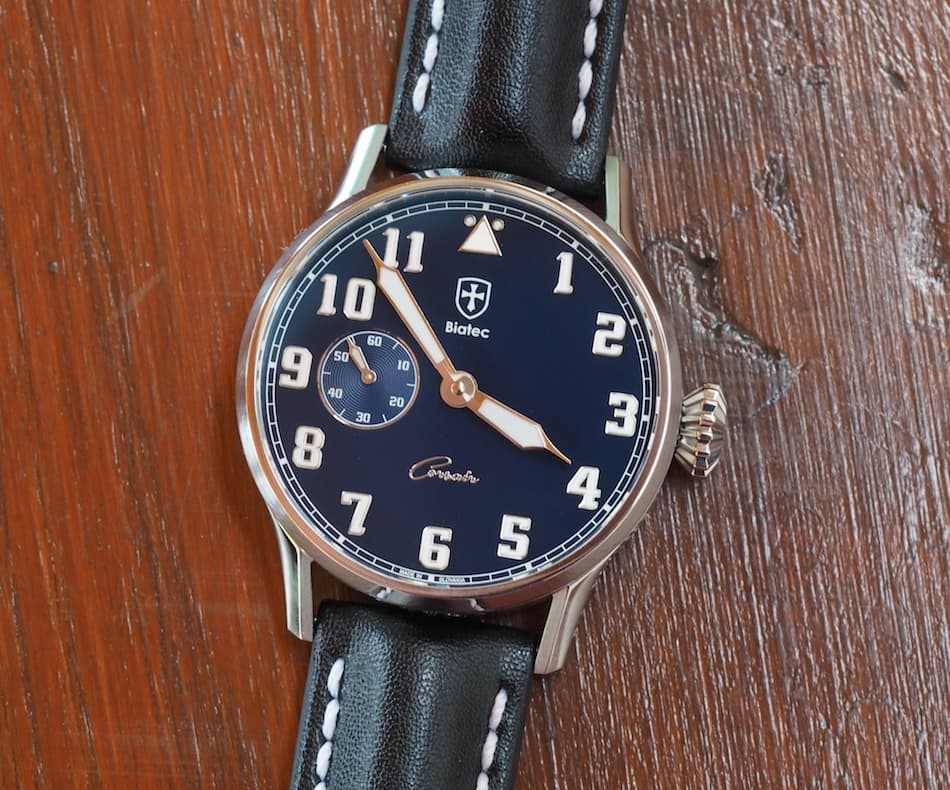 The Biatec Corsair is Made in Slovakia

Biatec is based in Zvolen, Slovakia, which is about 2 hours North of the country’s capital, Bratislava. If you’ve heard of Banska Bystrica, you’re essentially there. The founder, Peter Kozar, created the brand within the last year after selling various brands of watches. He linked up with the co-founder and designer, Milos Jakubec to create high-end, yet affordable, mechanical watches such as the Biatec Corsair 05. Milos is an accomplished watchmaker and assembles the watches in Slovakia. Where did the name come from? Biatec (pronounced “Biatex”) is the name of a Celtic king shown on coins minted in Bratislava back in the first century B.C., so it’s a name that links the country to the watch. If you’ve ever heard the Slovak language, be thankful that Peter chose a relatively easy name to pronounce! 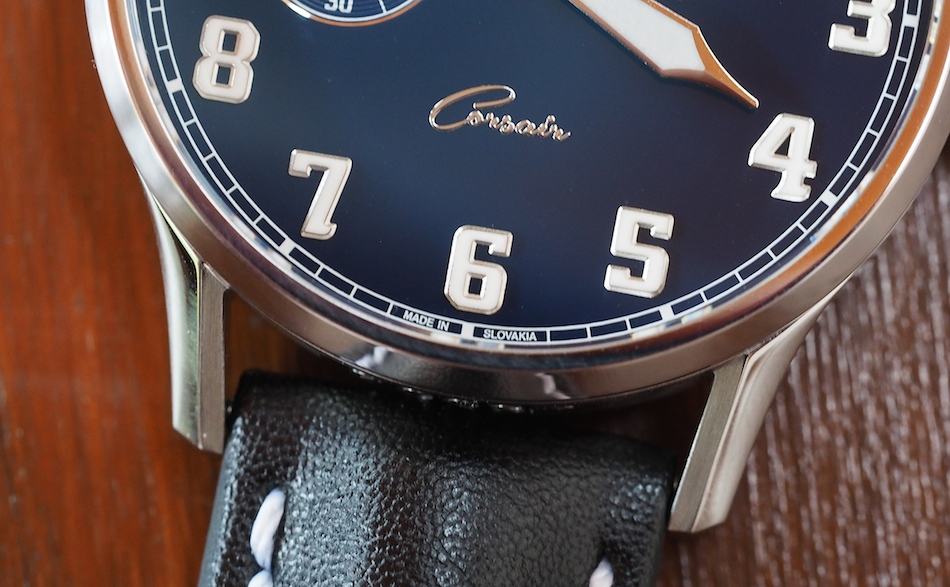 A quick look at the Biatec site will show, firstly, that it’s well thought out and, secondly, that the brand offers a number of different models. There’s the Majestic collection, which is a bit dressier and there’s the Corsair collection that harkens back to classic pilot’s watches. All watches feature Eterna automatic calibers and range from roughly 1,000 – 1,500 Euros depending if delivery is taken within the EU or not. I’ll leave it up to you to determine if these watches are worth your time and money, but upon hearing that Eterna movements were employed, I was immediately impressed. 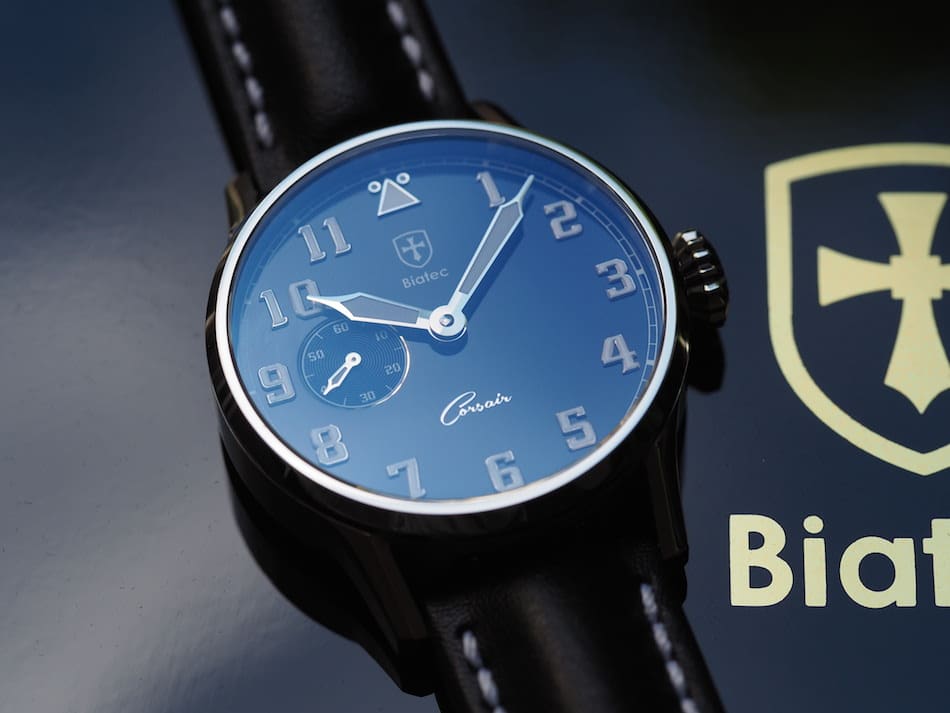 As you can see, I went the aviator-inspired route with the Biatec Corsair 05. The watch was delivered to me and came in a seriously heavy package. Upon opening the shipping carton, I was met with a very large black lacquer-finished box. It’s large and, as mentioned, very heavy. 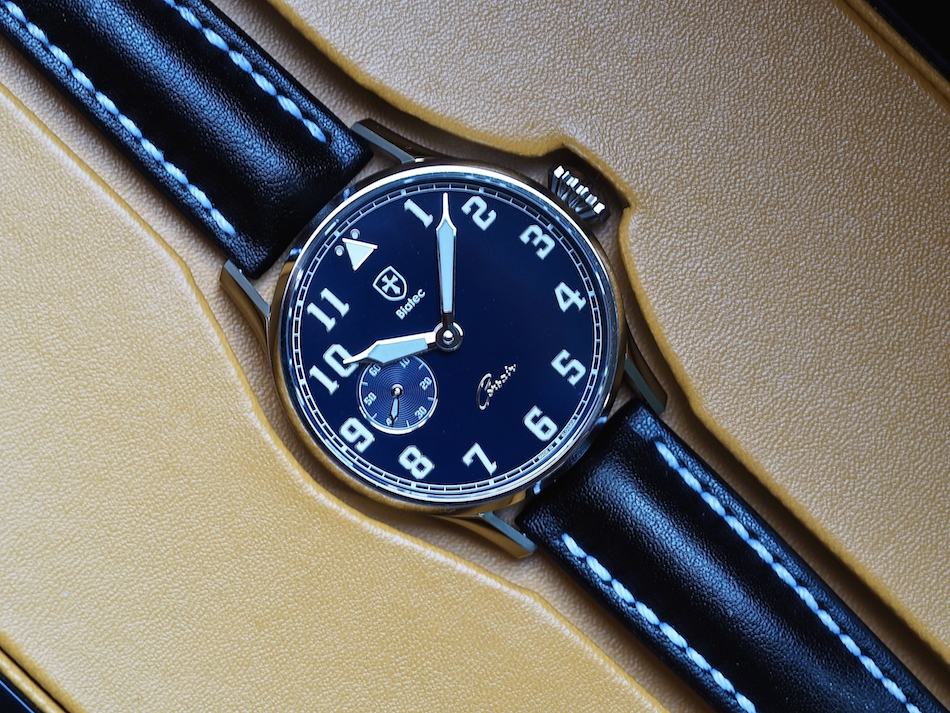 Inside, the box is lined, cushioned and has a cutout area to fit the watch. From a presentation perspective, this was a good start. Naturally, though, what lies inside the box is more important. 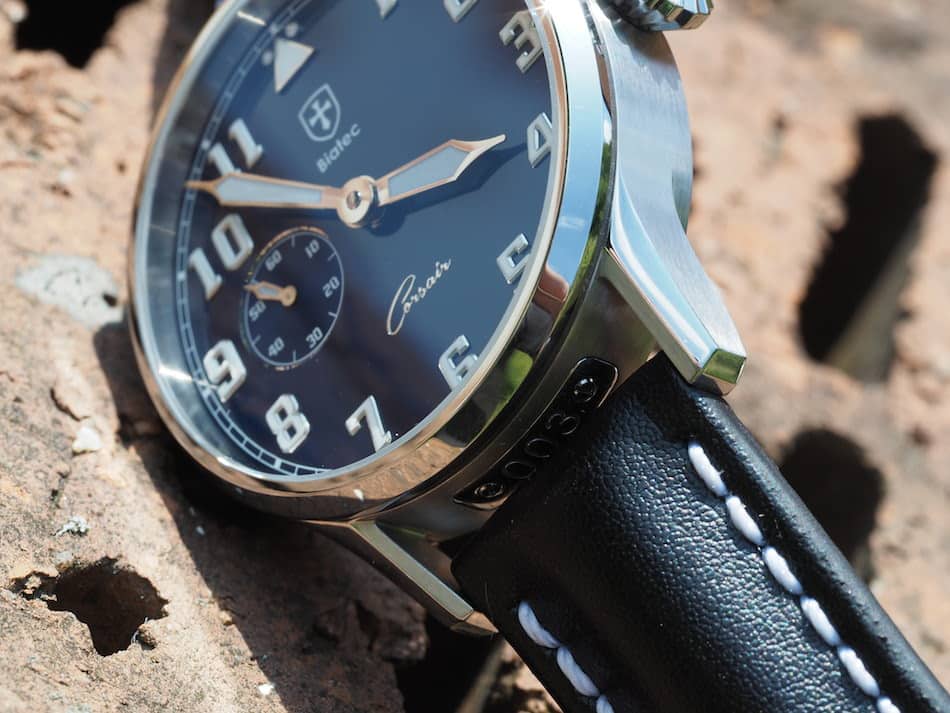 A Deep Blue dial on the Biatec Corsair

Despite the fact that the Biatec Corsair I tested is a running prototype (an Eterna movement with date wheel was inside despite this being a no-date model), I came away impressed with the overall finishing. I chose a blue lacquered dial (there are several choices including a PVD version and one with gold plated hands and indices) with a 40mm stainless steel case as the blue looked incredibly rich on the site photos. I wasn’t disappointed with this in person – it’s a beautiful dial and one that’s really shown off through the use of a nearly flat sapphire crystal and a very slim polished outer bezel. It contains lumed (Superluminova T3) hands and numbers that are stylistically similar to those we’ve seen on Zeniths and the recent and controversial Patek pilot’s chronograph (ref.5524). In fact, Biatec makes a Corsair with a center mounted seconds hand that might soothe your desires for the recently announced, limited edition, Patek ref. 5522A – for about 5% of the price. 😉 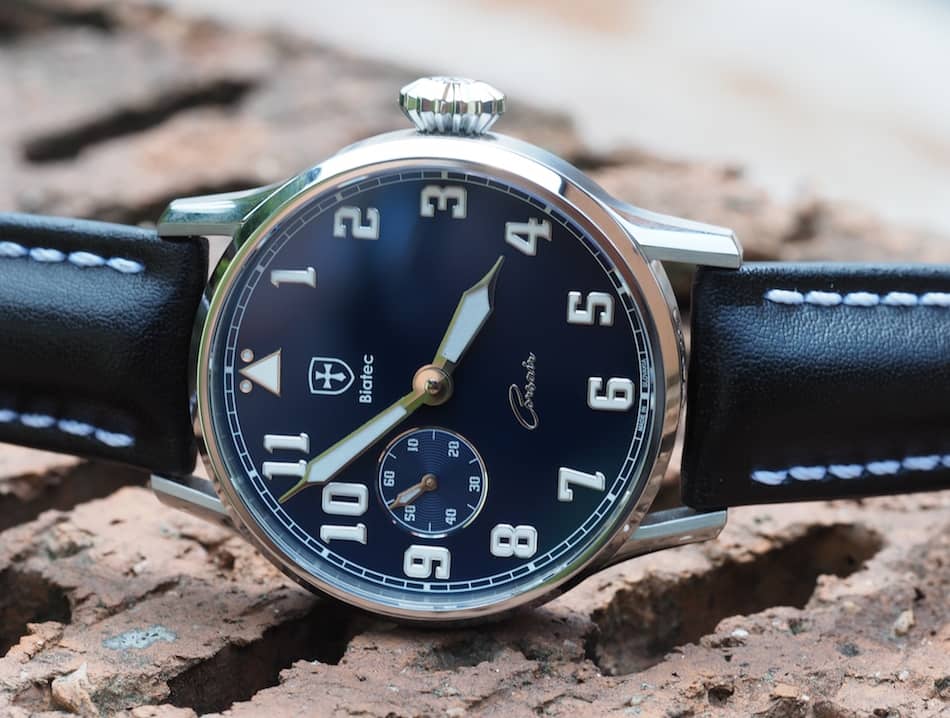 Some might call the Biatec Corsair 05 too derivative, but the style of numbers was popular on older pilot’s watches, so I’d call it fair game for anyone to use. The logo is nicely placed along with the company name. The model name, however, is applied in silver script above 6:00. It’s something that took a little getting used to as it comes off as a bit whimsical versus the rest of that watch. You’ll also see that the dial has a running seconds hand at 9:00 and this serves to break up a dial that would otherwise come off as a wide-open expanse. Note that the subdial is ridged and nicely done. I also have to point out the “Made in Slovakia” script below 6:00. 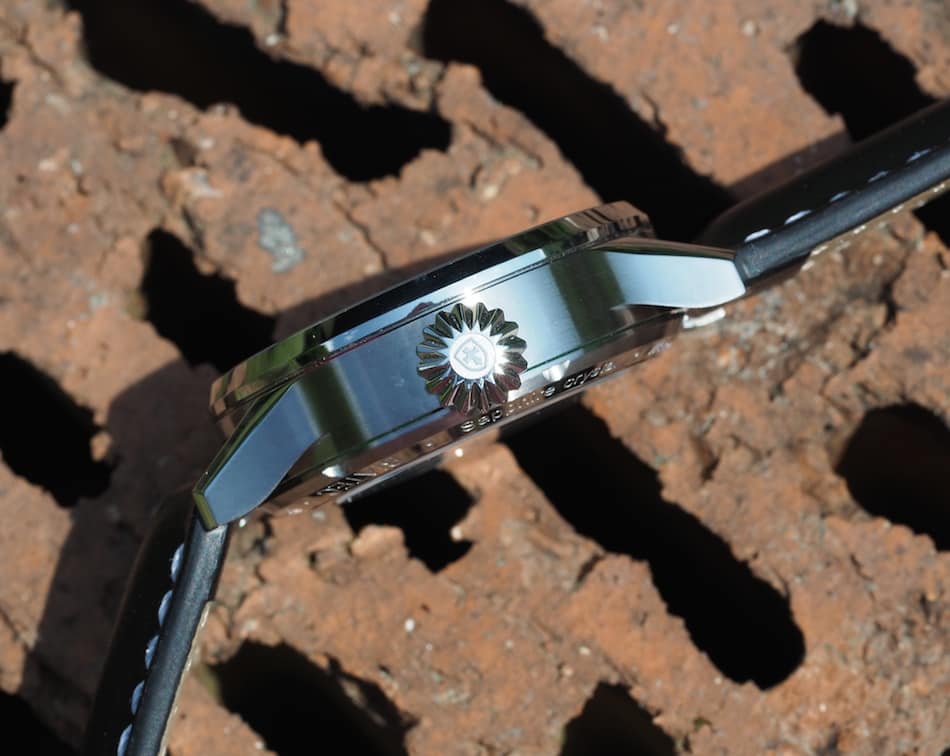 Case-wise, I liked the Biatec Corsair. For what ends up being a rather tall, chunky case due to the thick Eterna movement, it’s slimmed down when viewed from the top with its narrow bezel. The same can be said about the narrow lugs themselves. Speaking of those lugs, they’re nicely chamfered with enough detailing to justify the watch’s price point. Look in between them on the 6:00 side and a riveted, numbered plate is there with the Corsair’s serial number: a nice touch. You’ll also note the large, signed, onion crown typical of pilot’s watches. It’s actually screw down and helps the watch achieve a water resistance of 100m. It’s actually a nice, tactile touch that, once again, adds some flair to this 3-hander. 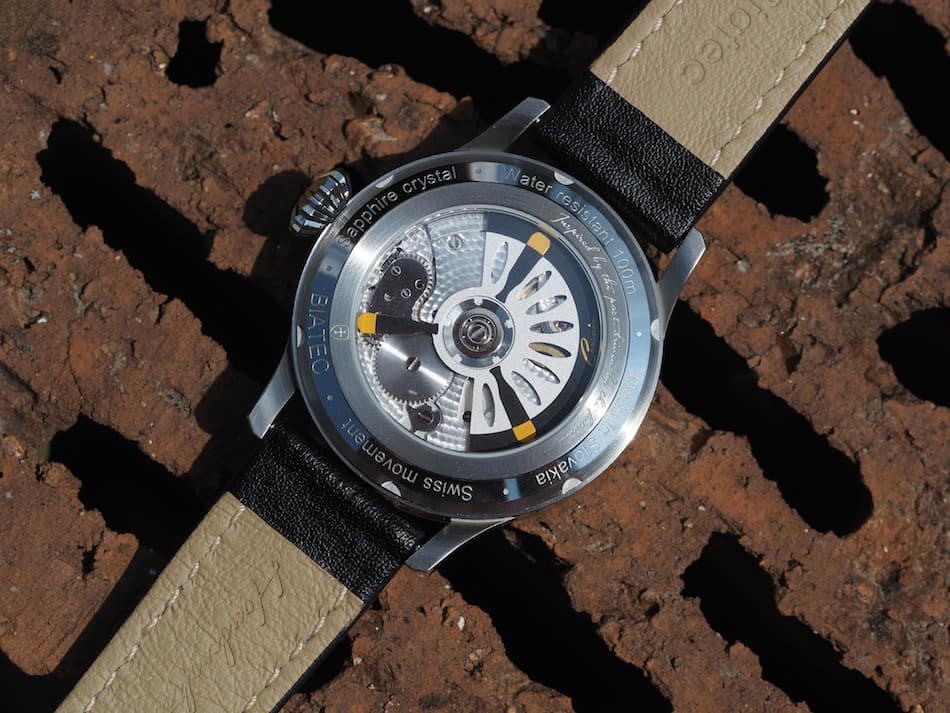 Coming to the innards, the Biatec Corsair uses the Eterna 3901A Caliber. Aside from the fact that Eterna has been in the news as of late, this strikes me as a very different choice for a small company. Whatever the reason, the partners at Biatec chose to eschew an ETA, Soprod, or Sellita in favor of a more expensive automatic. As I mentioned above, this piece was a prototype and had a date-equipped movement inside, but it otherwise ran very well. Flipping the watch over, you’re greeted by a rotor decorated to look like the propeller of a Corsair WW2-era fighter plane. Underneath, the mainplate has received an engine-turned finish. Normally, I’m not one to fuss about display backs, but this one looks great! I also enjoyed the large “Made in Slovakia” engraving around the caseback’s circumference. 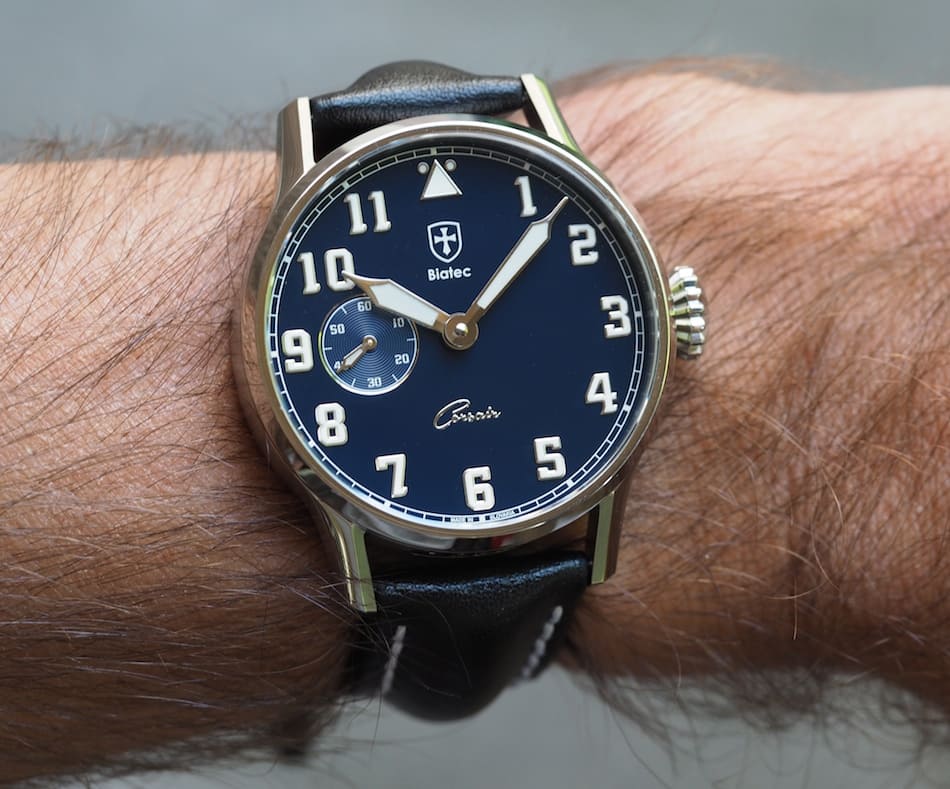 Nice Details on the Biatec Corsair

The Biatec Corsair came with a ridged leather strap not unlike what is often found on a Breitling. It was stiff, but softened after a couple wears. 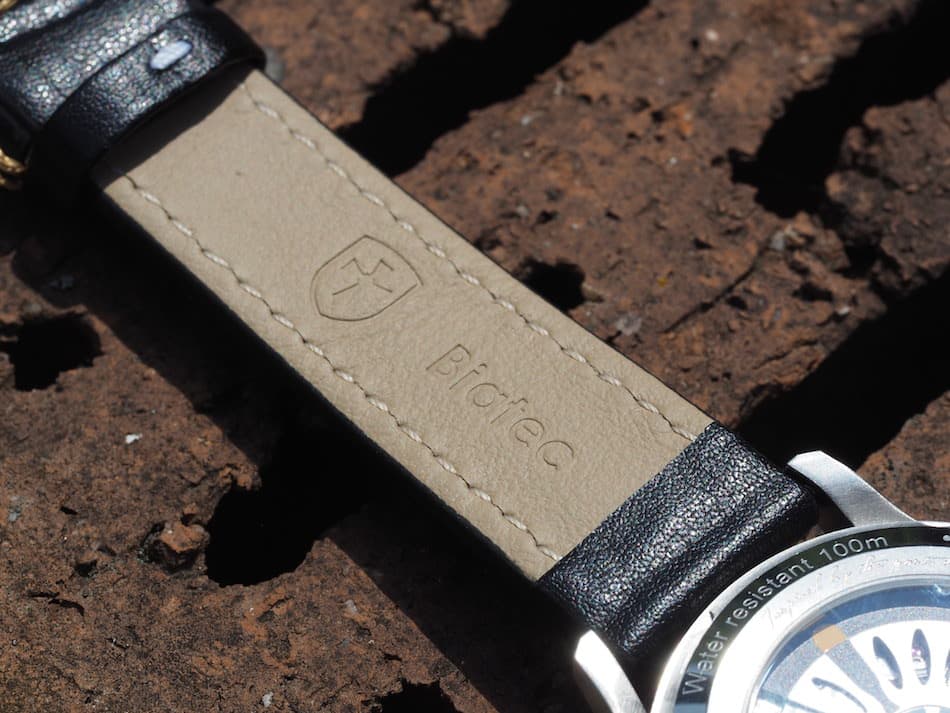 It was a quality strap that was signed on the underside and also contains a brushed, stainless and signed pin buckle. 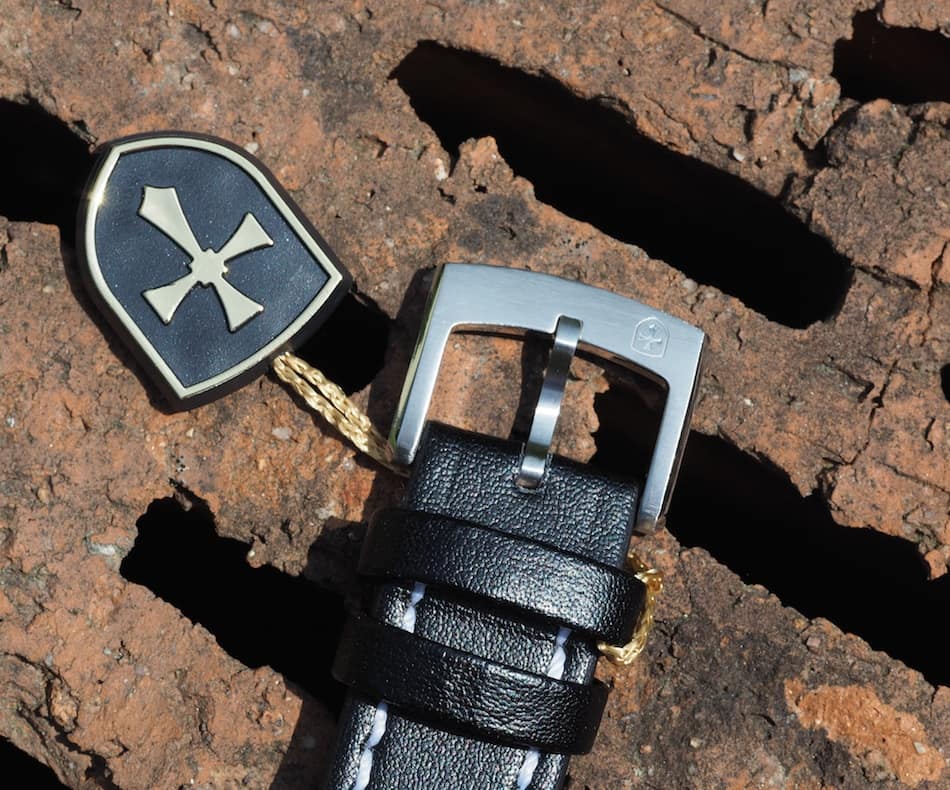 The watch looked really nice on my wrist, but if I were to own one, I think you’d see it on a more rustic looking strap. 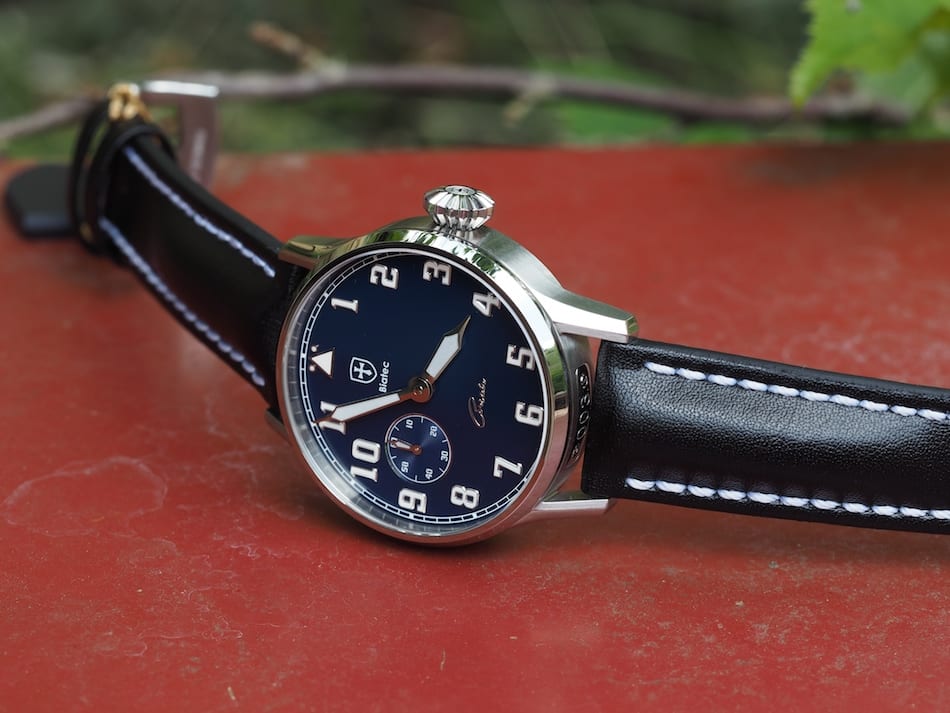 The Biatec Corsair 05 is priced at 1380 Euros within the EU and 1150 Euros for those who take delivery outside and can be ordered on the Biatec website. It’s hard to speak about value and whether something is a real bargain as it’s quite subjective, but it felt and appeared to me like I was handling something that should be priced in this range. My only minor complaint about the watch is the “thickish” case, but since it’s not a dress watch, I think it’s appropriate. The detailing, high quality movement, and looks of the watch certainly make up for this small concern. I doubt that you’re looking at the next mass-market brand when it comes to Biatec, but that doesn’t seem to be the aim of the owners anyhow. If a high-end, value-laden dressy sports watch is on your shopping list, consider an unorthodox choice from Slovakia.