Graced with a new color combination, "The Watch That Won The War” gets a modern look
Jorg Weppelink
comments 14
Share

If you are a fan of military watches, the world is your oyster. We have seen a lot of the great military classics return from different eras. Obviously, names like Hamilton and Benrus are the most common ones that most people will think of when discussing American military watches. Another iconic American brand that was responsible for multiple great military classics is Bulova. Together with Elgin and Waltham, Bulova was responsible for the production of the famous A-11 military watch. Bulova has decided to bring back this WWII classic and update it with modern specs and colors. I had a chance to go hands-on.

Military-watch enthusiasts are truly spoiled for choice. Whether you are a fan of the iconic Dirty Dozen or the mil-spec watches used in the Vietnam war, you can find both the original watches as well as plenty of re-issues nowadays for an affordable price. An iconic watch from World War II is the A-11. As mentioned, the A-11 watches were watches produced by Bulova, Elgin, and Waltham. The watches were produced according to the A-11 specifications for American soldiers in WWII. They featured a hacking movement that allowed the soldiers to perfectly synchronize their watches. This is why Bulova has named this new version the Avigation Hack A-11. But Bulova also likes to call it “The Watch That Won The War.” Having said that, quite a few things have changed with this modern version. 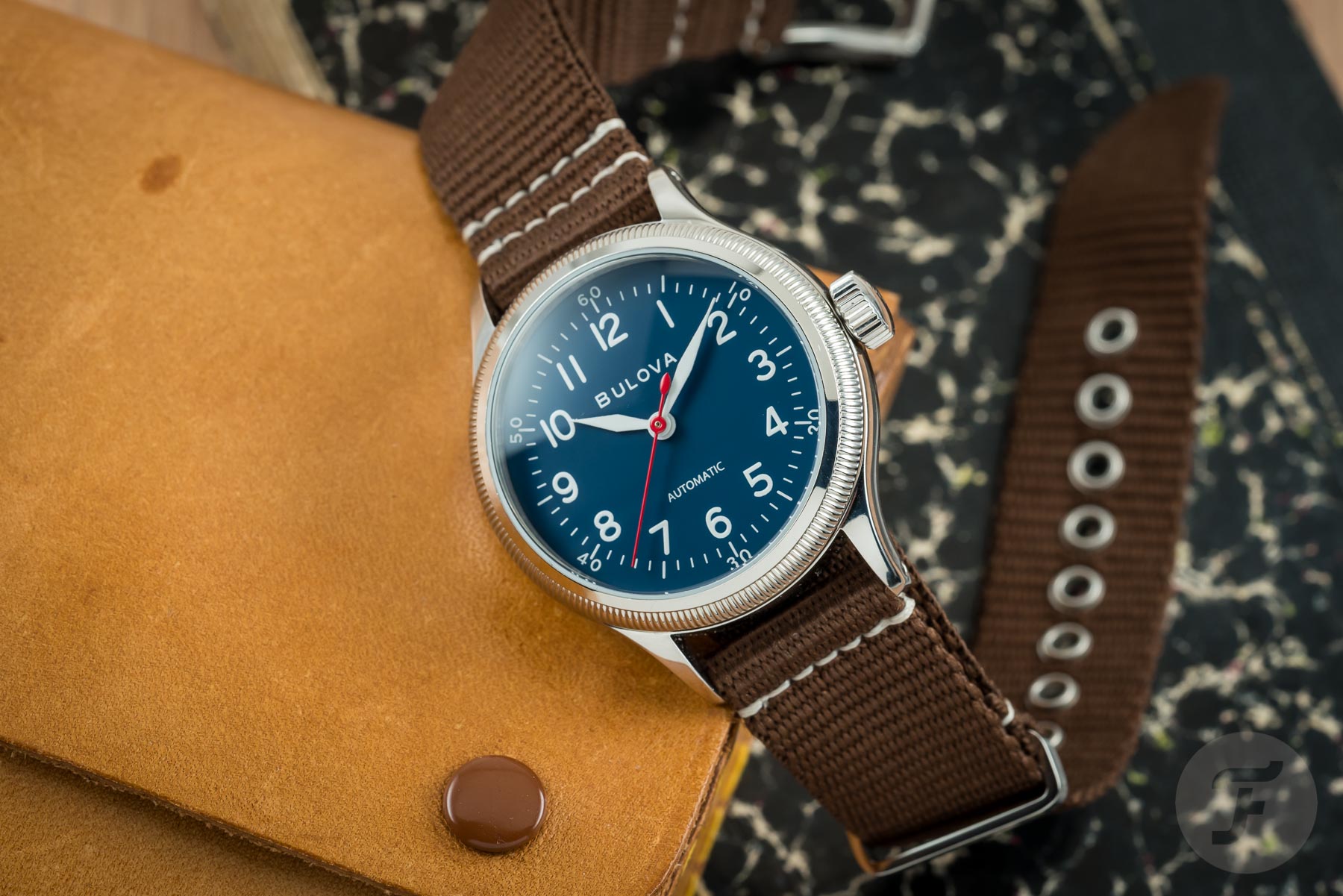 The WWII A-11 watches

But let me first go back in time a little bit. During World War II, there were numerous watches produced and issued to the American military. The most famous out of all of them is probably the A-11. Tens of thousands of these watches were produced at that time and issued to Allied soldiers. The timepieces featured an easily readable black dial with white indices. The cases of the watches were made from either nickel or silver and featured a one-piece strap. 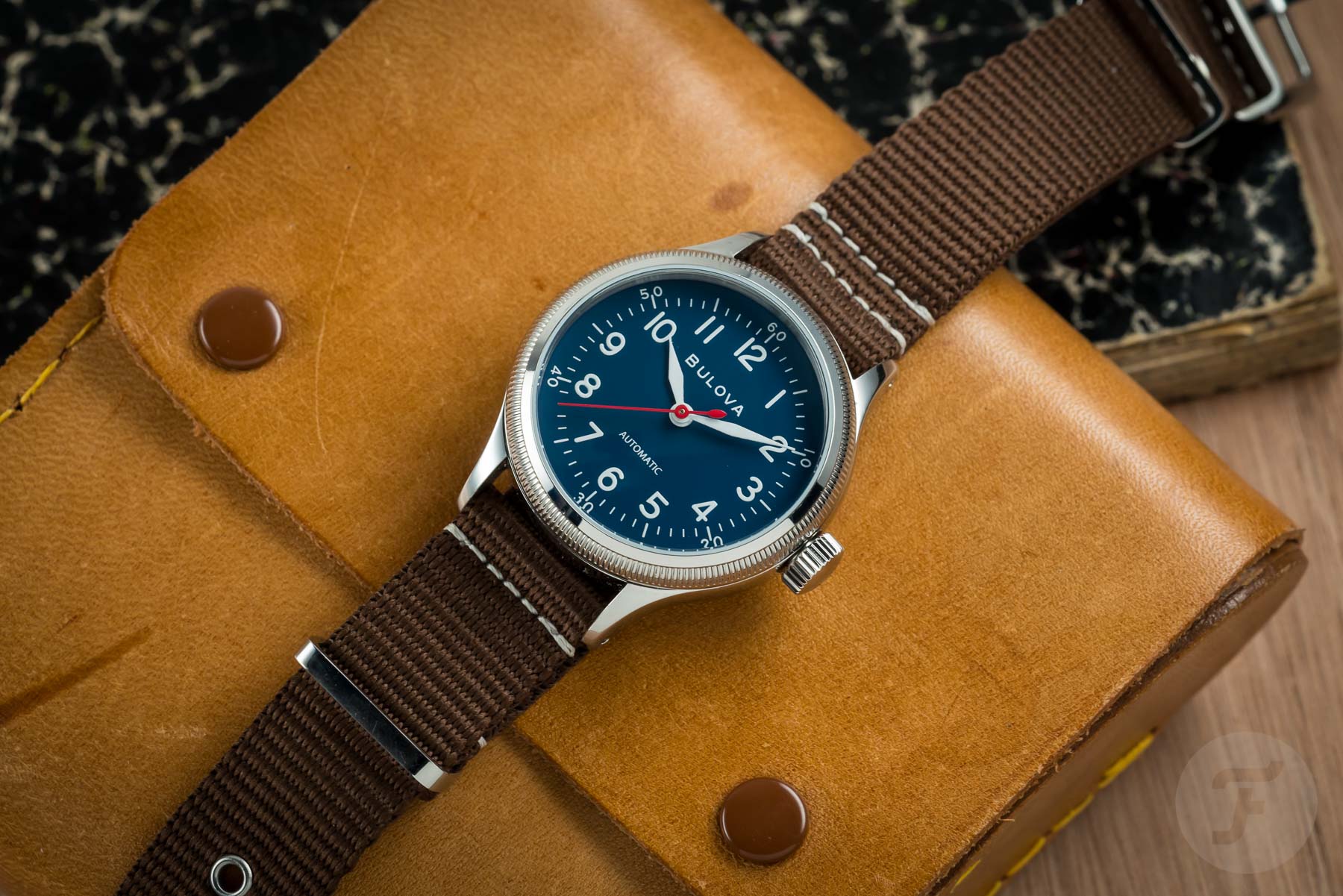 The watch was developed during the war according to the A-11 specifications. Today, watch fans also refer to A-11 as the name of these watches. Part of the specifications was the black dial with white numeral indices and an outer track with markers for every ten minutes. Another part of the specs was the hand-wound hacking movement that featured a center seconds hand and the obvious hour and minute hand. When it comes to the execution, you will find models with either a coin-edge bezel or a flat bezel. On top of that, you will find some A-11 watches that feature water-resistant cases, while some have dustproof cases. Lastly, there are versions both with and without lume. 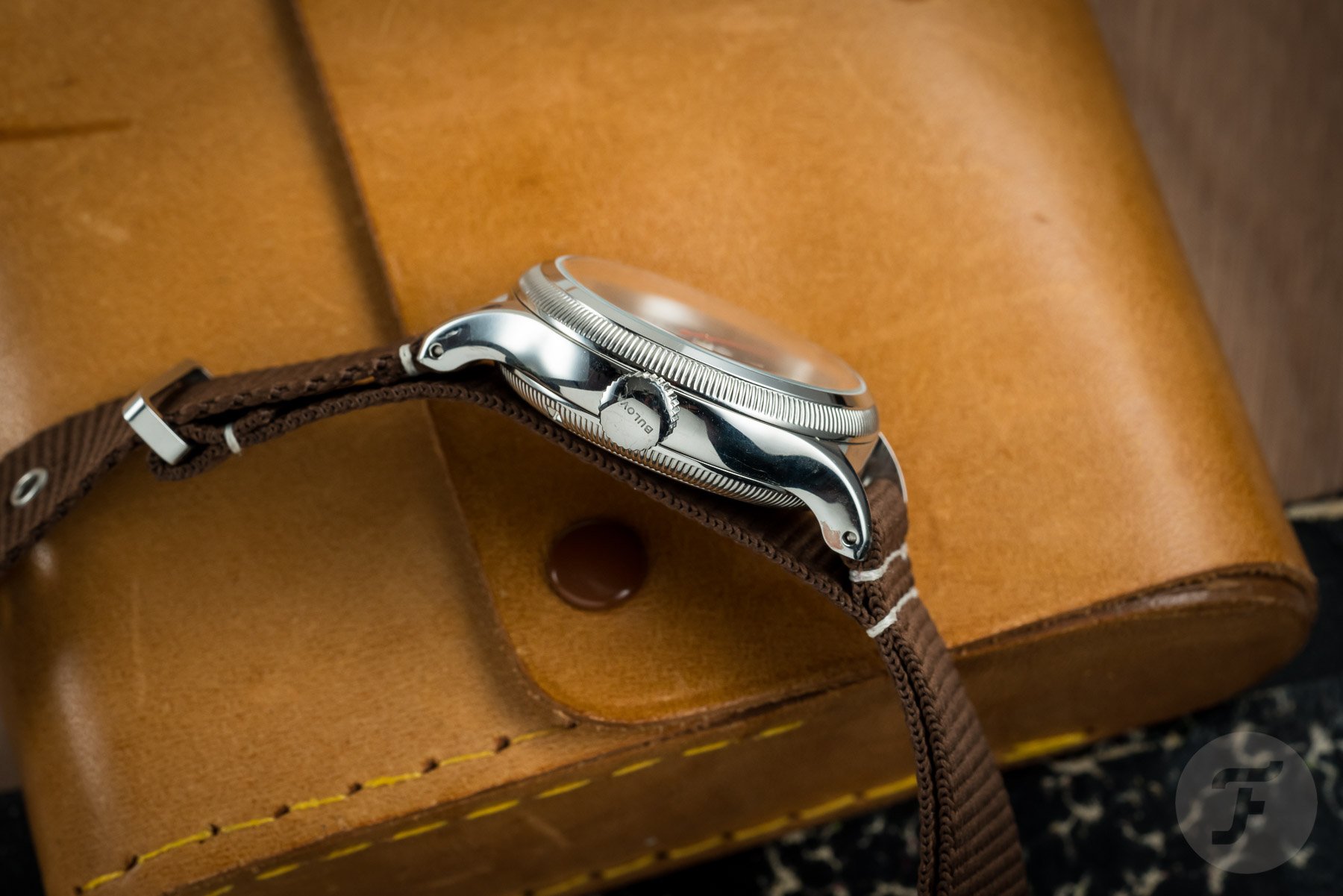 The updated Bulova Avigation A-11 Hack

If we then look at the modern version that Bulova issues, we see one big difference compared to its original version. The case size now suits modern standards at 37mm, compared to the 32mm of the original. The case is 14.5mm thick, and also features an 18mm lug width and a coin-edge bezel that adds character. Additionally, the watch is executed with a blue dial with a bright red seconds hand and a dark brown NATO strap. This is obviously not the color combination used during WWII, and it gives the watch a less utilitarian presence. Additionally, the white hour and minute hands and white hour markers feature Super-LumiNova. 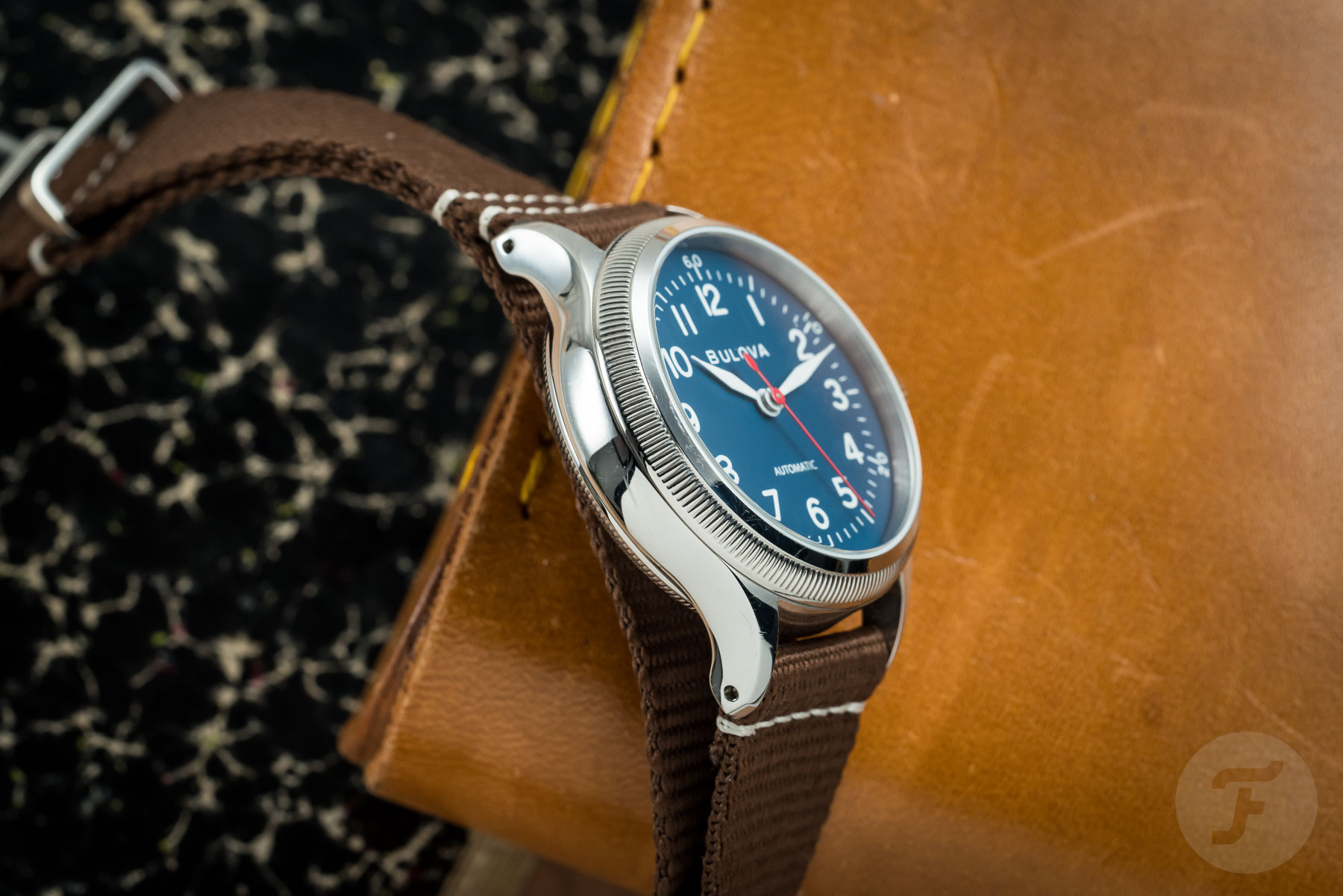 When I first saw the updated aesthetic, I was caught off guard, to be honest. Here we have a military watch that comes in a completely different color and looks more frivolous than your regular military watch. And I’m still on the fence about whether this works for me. While I don’t mind a bit of color, especially when it comes to military watches, the original execution was crucial for them to be effective in the midst of battle. That’s why it feels a bit strange to see this more colorful version. Many watch enthusiasts, myself among them, love the original look that made these watches perfectly equipped to work in those difficult conditions. 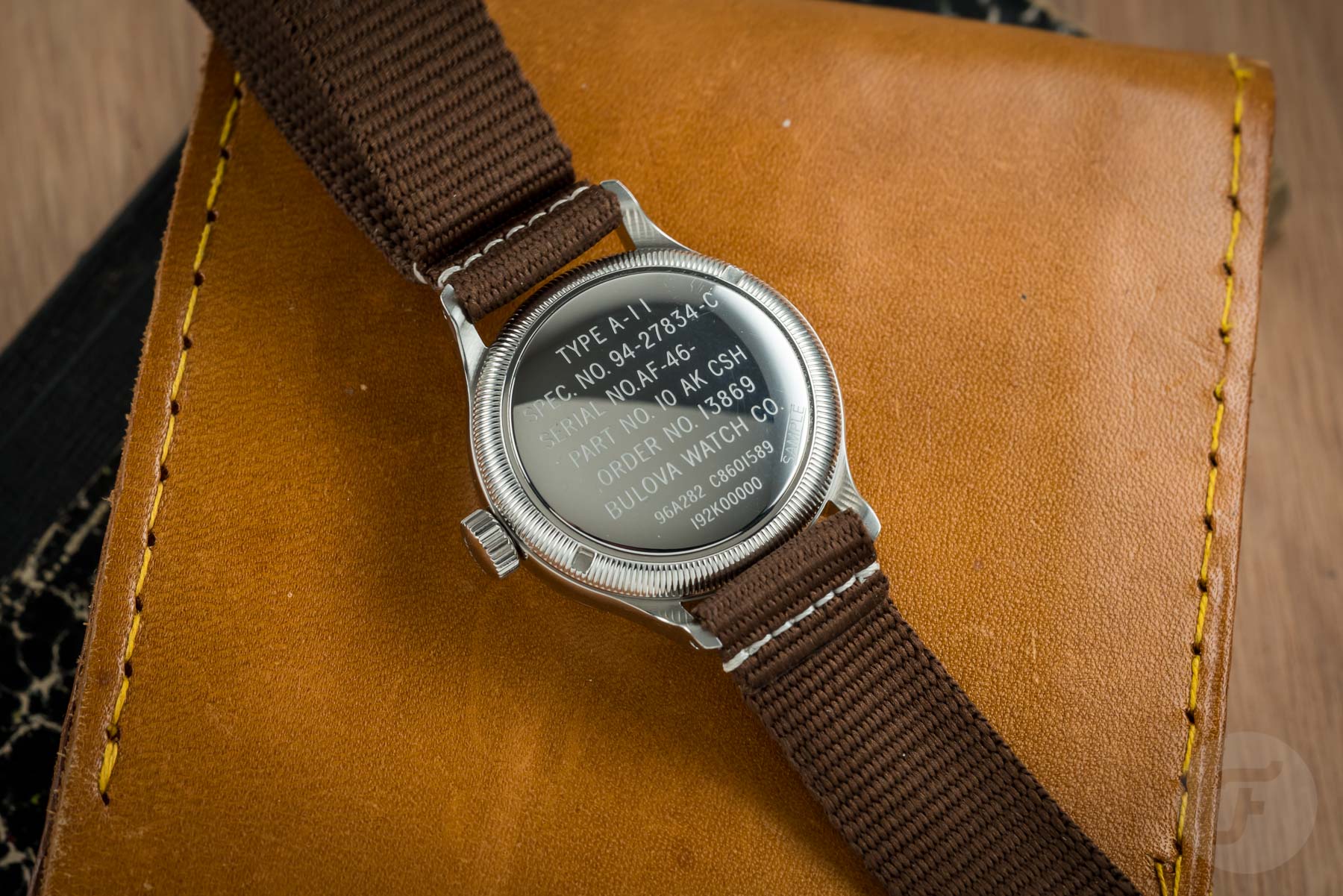 If you remove the NATO strap to have a peek at the case back, you are greeted by an engraving. The engraving covers eight lines and includes all the military specs that were engraved on the case back in the 1940s. This includes the type of watch, the specifications number, and the serial number. Underneath the case back, you will find the automatic Miyota 82S0 3 movement with a hacking-seconds feature. It’s a logical and unsurprising choice as both Miyota and Bulova are part of the Citizen Group. 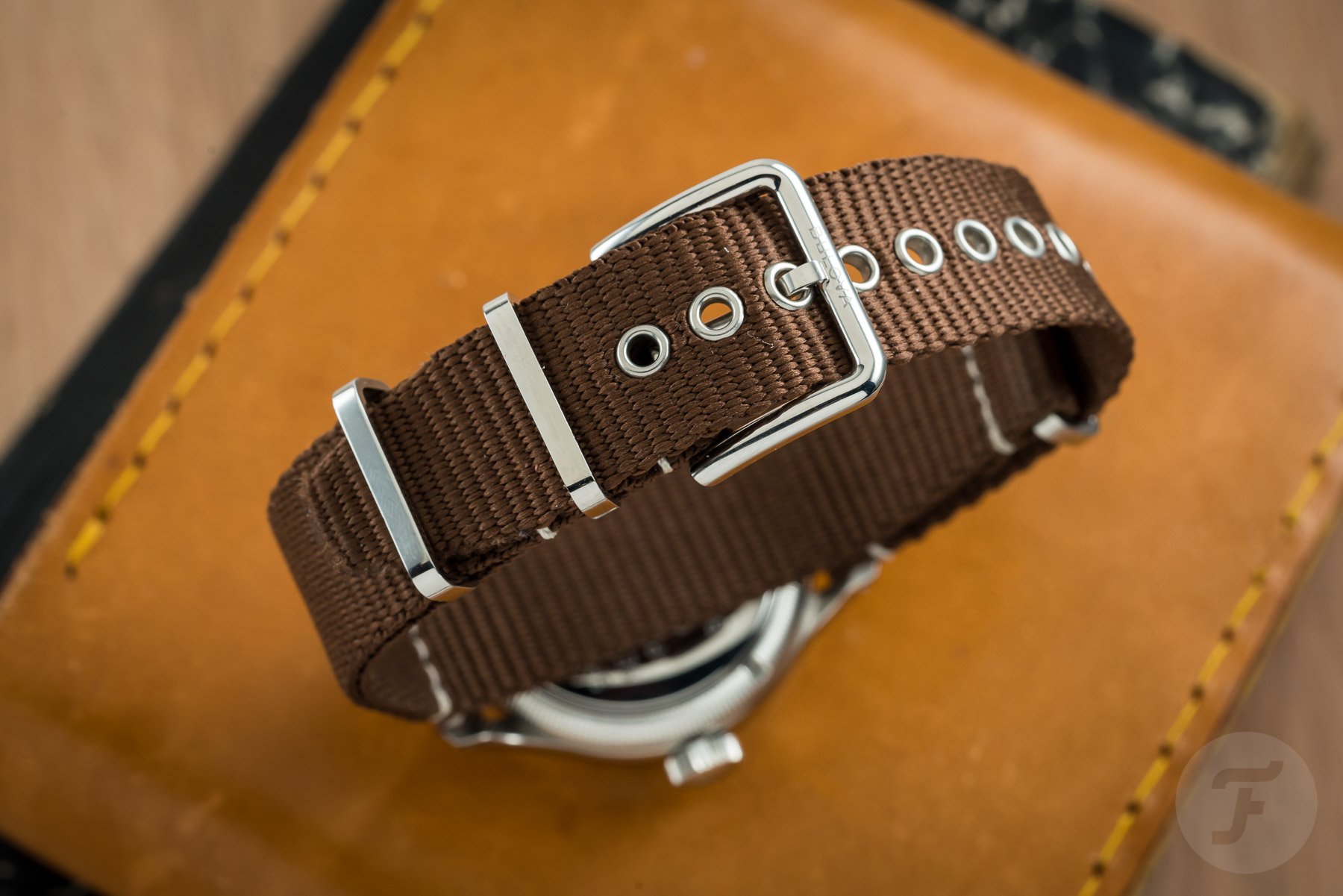 The Miyota 82S0 is part of the standard range of movements and comes in both an automatic and hand-wound version. It operates at 21,600vph and has 21 jewels with a 42-hour power reserve. In terms of accuracy, the official numbers Miyota gives are +40/-20 seconds per day. As it is a very basic movement that we see more often in watches in the affordable price category. this is nothing too impressive. It will perform its duties, but comparing it to the original watch that was equipped with a Bulova in-house caliber 10AK CSH, it simply feels different in terms of storytelling. 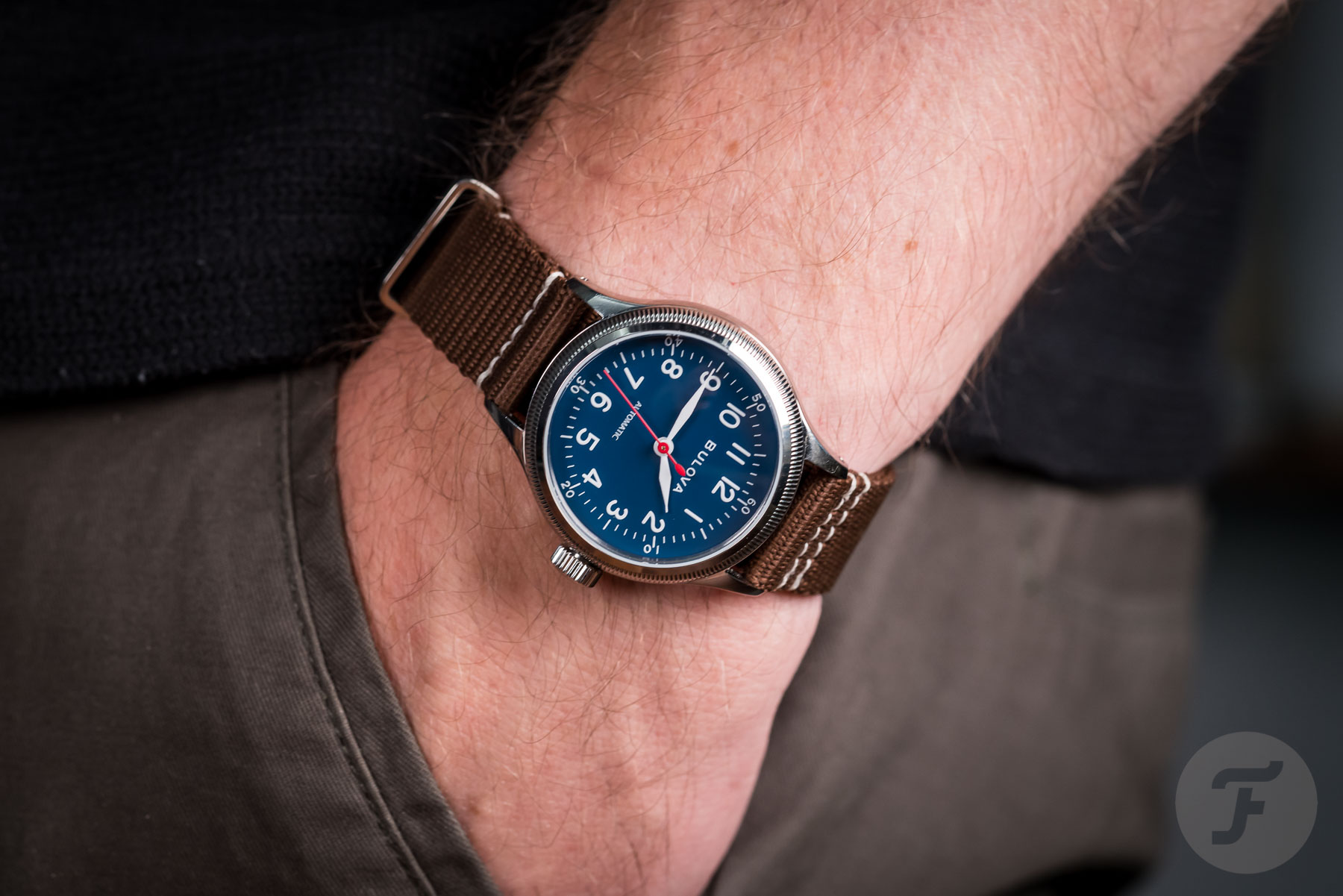 Wearing the Bulova Avigation A-11 Hack

Once on the wrist, the Avigation A-11 Hack definitely benefits from its increased size. Although it’s still a very modest watch at 37mm, the original size would have made this a very small watch that is not fit for my wrist. The first thing that stood out was that I had to strap the watch rather tightly on my wrist. Because the 18mm brown NATO strap is rather flexible, the weight of the watch requires a tight fit. If I loosen it just one extra hole, the watch starts moving around and is not comfortable to wear. 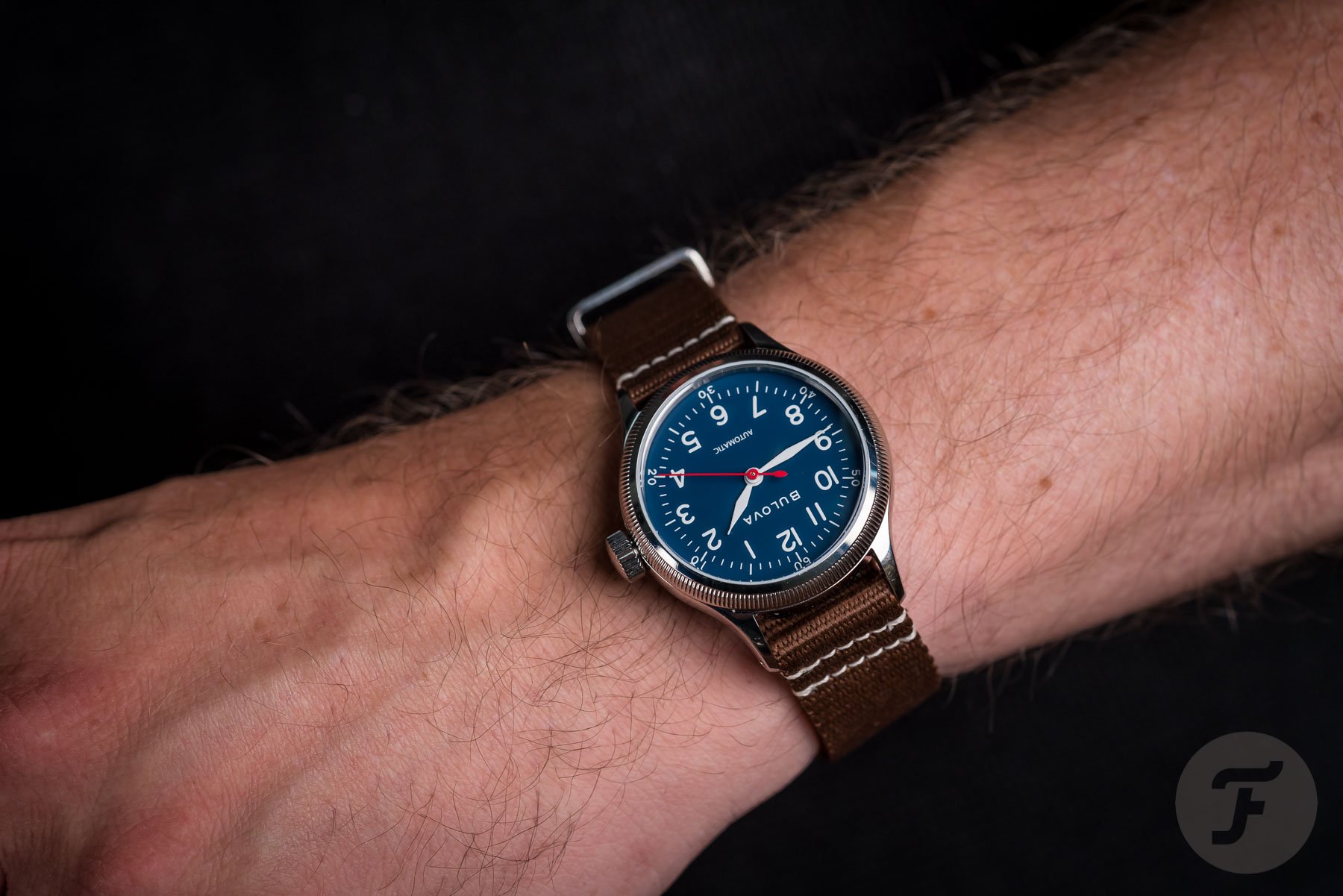 But if you strap the Avigation A-11 Hack to your wrist tightly, it does wear quite comfortably. In all honesty, though, the watch would benefit from a sturdier NATO or Zulu strap. It would balance out the watch better on the wrist. As it is delivered, the weight of the watch is too much for the strap. Put this on a leather NATO strap, and it will be a lot better in terms of both looks and wearability. Other than that, the watch does what it needs to do. But what about the aesthetics? 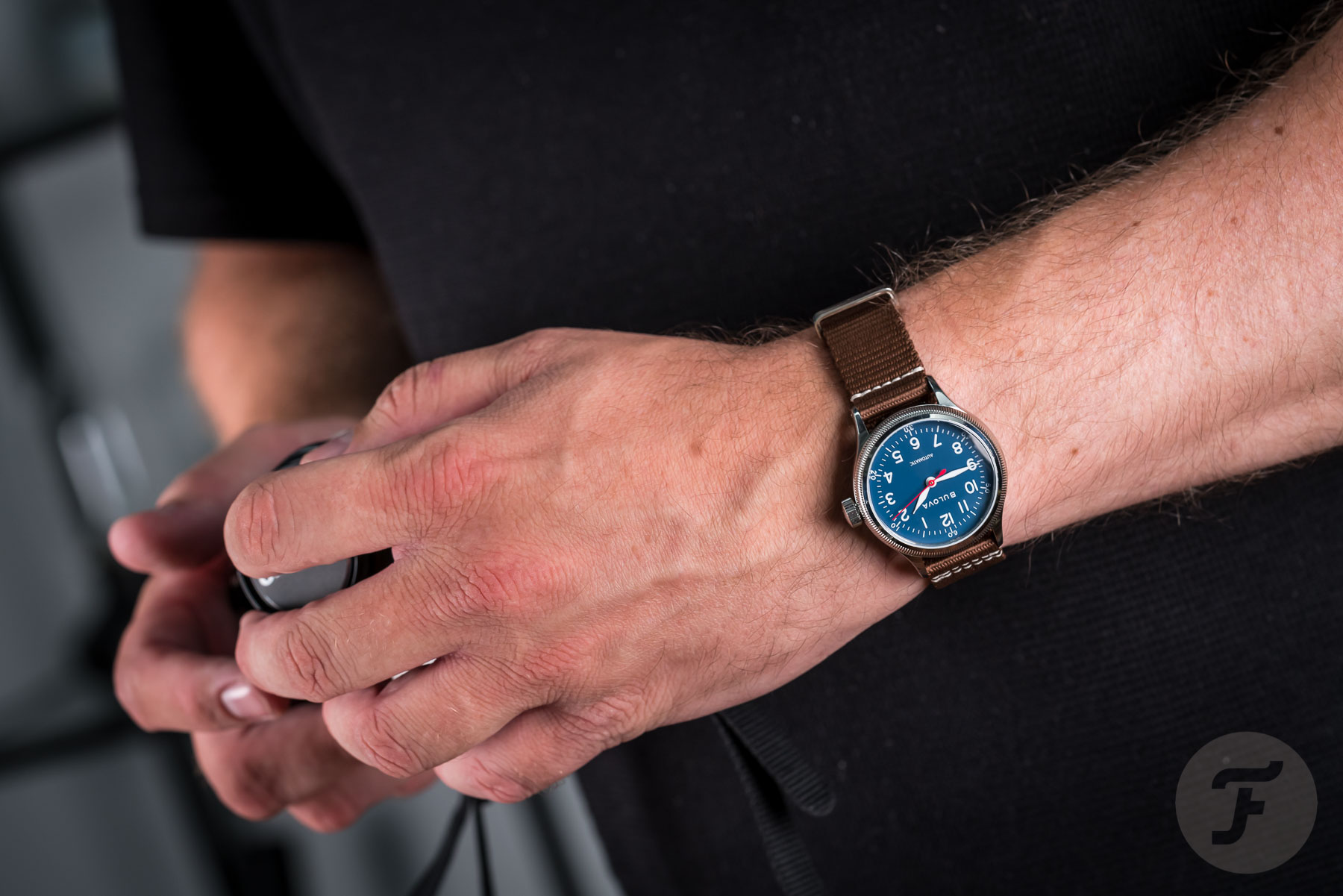 Overall the Avigation A-11 Hack left me a bit cold, in all honesty. I had a hard time getting used to the color combination considering the watch’s history. And if you look back at history, there was a specific reason why these military watches were produced according to a pre-defined set of specs. I get that Bulova had the ambition to make a more colorful and contemporary version of the original watch. However, I’m left wondering whether enthusiasts would want that from this kind of watch in the first place. 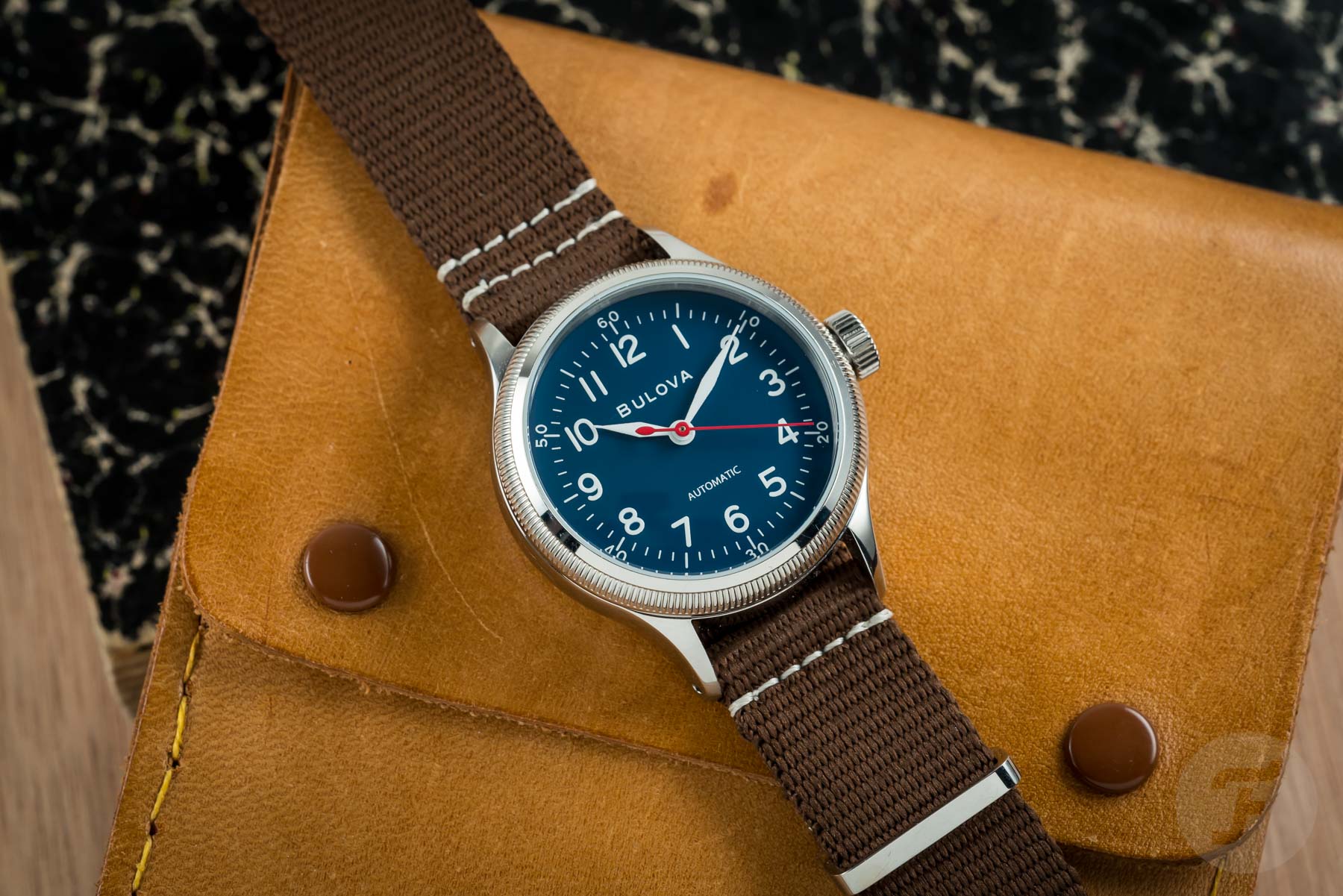 If you want a military watch, I would spend a little more than the €299 this Avigation A-11 Hack costs. I would get a Hamilton Khaki Field, a CWC Mellor-72 Mechanical, or a Benrus DTU-2A/P. If you are specifically looking for an A-11 re-issue, you also have alternatives. The Praesidus A-11 is a great option, which is closer to the original watches from that era. It is even a little more affordable and comes with an NH35 automatic movement. But if you are looking for a colorful remake from one of the original brands, this could be your pick. I have no doubt that there are plenty of casual watch lovers out there who will like this.