The Comeback Of The Pasha De Cartier As A Complete Collection

With the re-release of the Pasha Grille at Watches And Wonders 2022, Cartier has launched a model that comes very close to the design that the brand says was custom made for the Pasha of Marrakesh in 1943. But before we get into the new 2022 models, let’s take a quick look back at what the Pasha actually is and when it came on the market; opinions are quite divided on that. Until the ’80s, Cartier was always known for its small, often square and rectangular watches, usually made in yellow gold. Therefore, it was quite a surprise when in 1985, a 38mm round timepiece suddenly hit the windows of the Cartier boutiques. Believe me, 38mm was very large for a men’s watch at the time, and some models even had a grille over the crystal.

There was even a story that the model was a replica of a 43mm watch that was built especially for the Pasha of Marrakesh in 1943. It was an interesting and very attractive tale, for sure. The watch soon found its way into the hands of both collectors and male and female musical artists. In the following years, Cartier also released steel models in smaller sizes. The collection was actually quite large with lots of different models available. There was everything from time-only pieces and chronographs to perpetual calendars and moonphase models. In 2005, the brand launched the 42mm Pasha de Cartier, which, in my opinion, was the most beautiful Pasha of all time in terms of design and proportions. 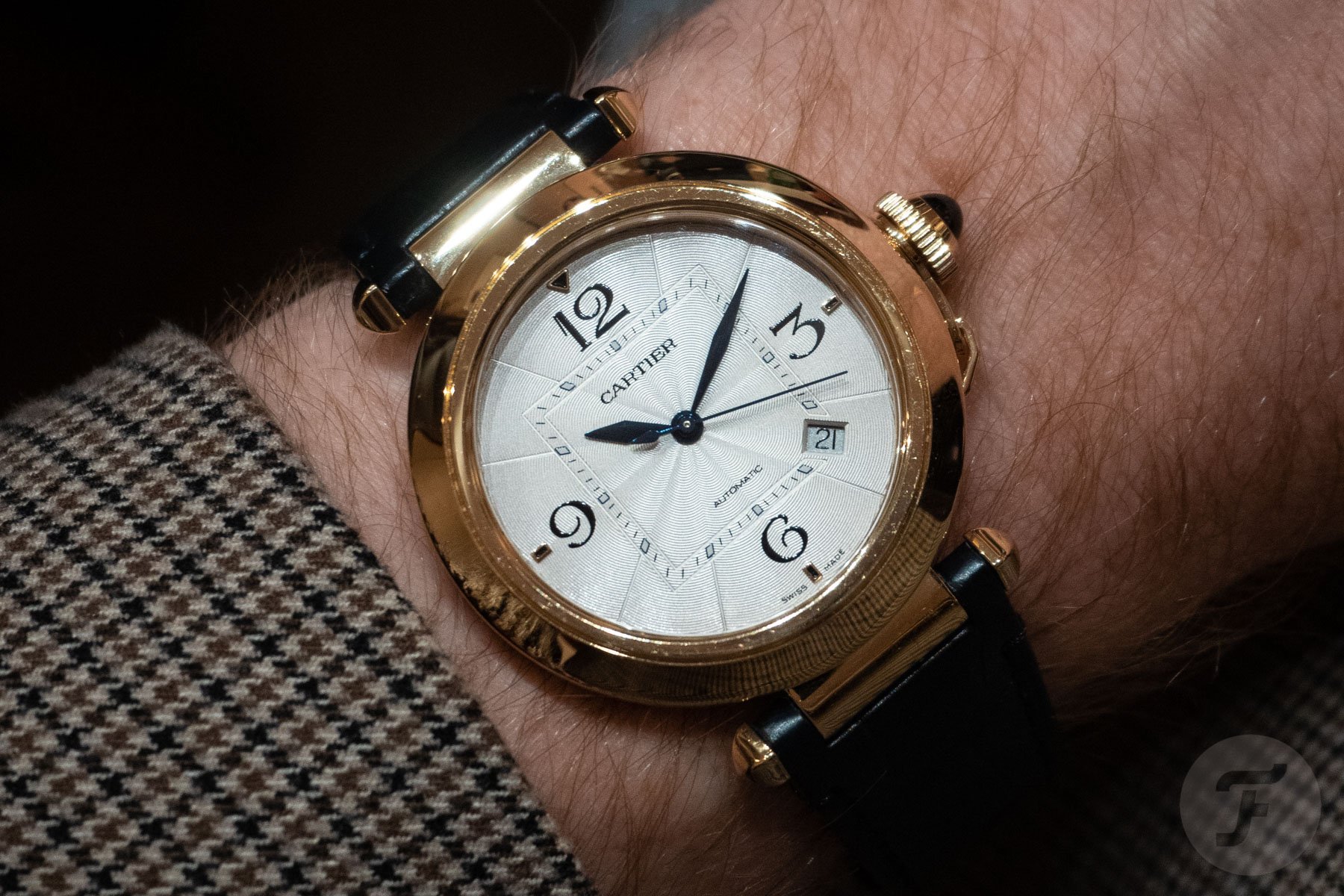 The new Pasha de Cartier without its removable grille

The origins of the Pasha de Cartier

Around 2012, the period when Cartier was developing high-end men’s watches, a few models with a tourbillon and other complications came out. Alas, not every line can stay in the Cartier collection forever. From a production/organizational point of view, that would be impossible to handle. Thus, a few years later, Cartier dismissed the Pasha from its lineup.

Meanwhile, rumors about the Pasha’s origins continued. At most Cartier exhibitions, like “Cartier in Motion” in London in 2017, there was often the very attractive “vintage” 43mm Pasha model on display as an example of how the original must have looked. The widow of master watch designer Gérald Genta had already said in an interview in the Financial Times that her husband designed the Pasha in the ’80s. Still, no one showed any evidence to back that up. A well-known auction house recently auctioned a couple of original Gérald Genta designs of various watches, including the famous Royal Oak by Audemars Piguet, but also two designs of the Cartier Pasha.

The drawings sold for high prices, which immediately put an end to the fairy tale. Personally, I believe that the Pasha of Marrakesh commissioned a watch from Cartier, but in my opinion, the story was strongly romanticized and the watch that was created for the Pasha of Marrakesh was probably a square and watertight watch. Now, let’s have a look at the 2022 models. 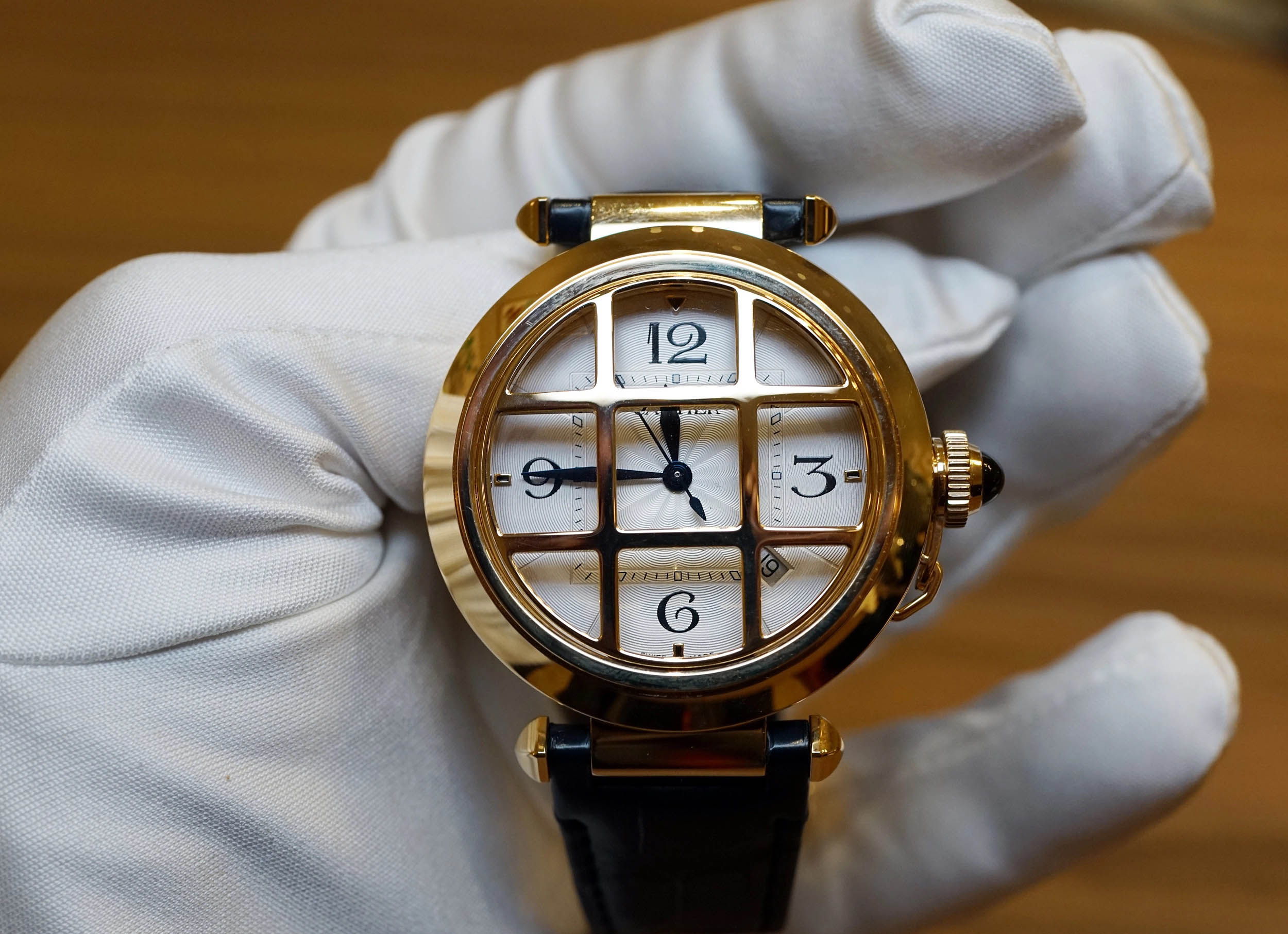 For me, this model really made sense. I’ve been hoping for years that this version would come back to the collection. Now, you probably remember Cartier re-launched the Pasha last year in 41mm and 35mm sizes, both with manufacture calibers. This year, Cartier continues with these new sizes. The brand presented a few really cool models like the 41mm Pasha in yellow gold, but now with the grille. This model looks extremely similar to the one we know from the Cartier exhibitions. Compared to the 38mm version with a grille from 1985, the construction of the beloved protective grid is now different. It feels more solid, and it is really easy to put on and take off.

But the unexpected surprise is for the owners of last year’s 41mm Pasha in yellow gold. Cartier never actually changes existing models. This time, however, owners of the former 41mm yellow gold model can upgrade their bezel at the Cartier boutique for the new one with the removable grille. I think this is such a great gesture. I know many owners of the previous model love to see their watch with a grille. The Pasha Grille will retail for €19,500, though we have no word on the price for the upgrade yet. 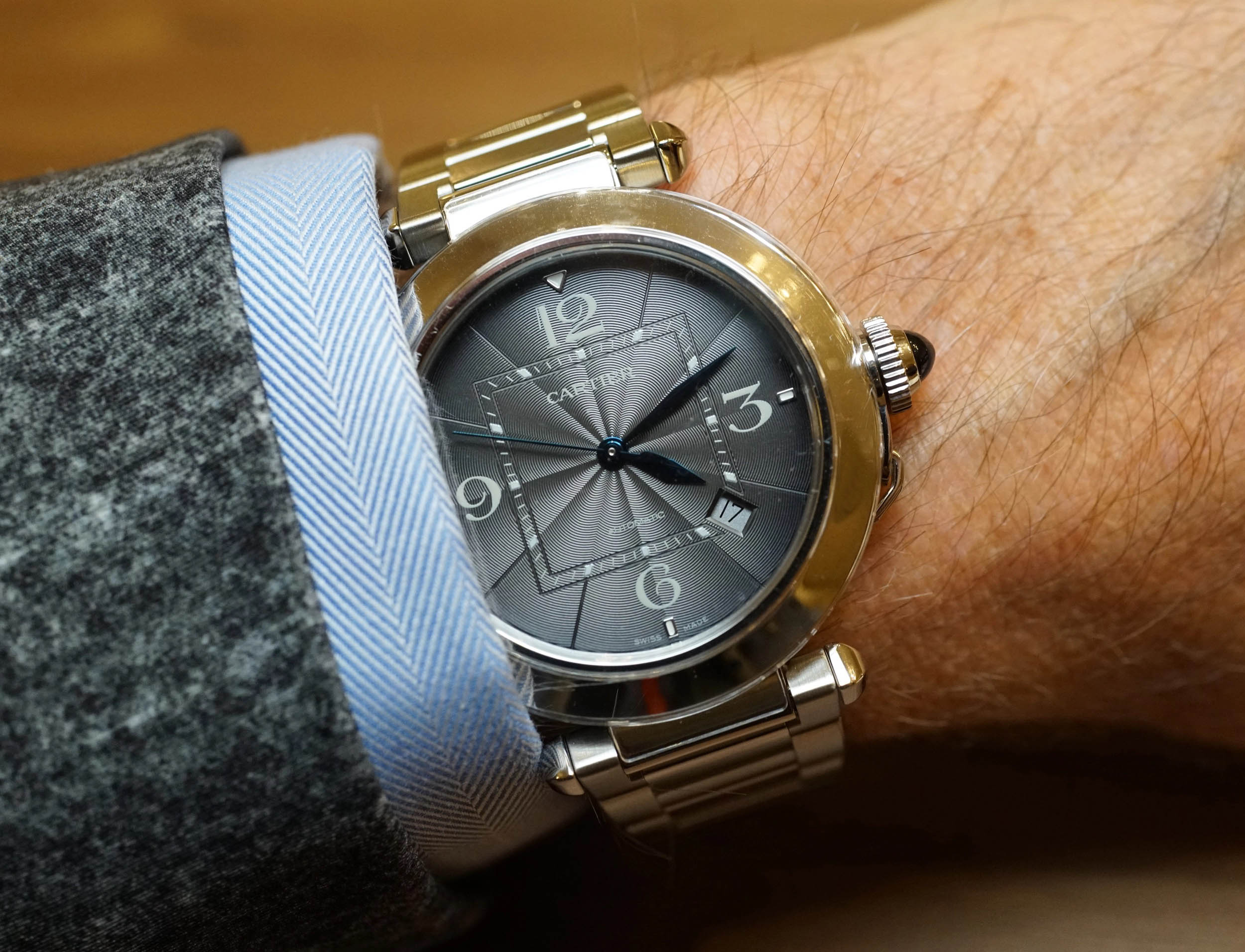 If the cult look of the Pasha fascinates you, but you find the gold case and grille a bit too classic or perhaps too flashy to wear to work everyday, then the steel version with the mouse-gray dial might be the better solution. In the ’80s collection, Cartier mostly used luminescent hands for the Pasha. All models in the new line, however, have blued hands. I think this is a much better choice. The gray of the dial is not very light, but it still lets the blued hands stand out. And the steel version has another distinct advantage over the 18K gold Pasha. The watch comes with both a steel bracelet and an interchangeable gray alligator QuickSwitch strap with deployant buckle. The automatic 1847 MC caliber inside provides a power reserve of 42 hours. The price for this model is €7,300. 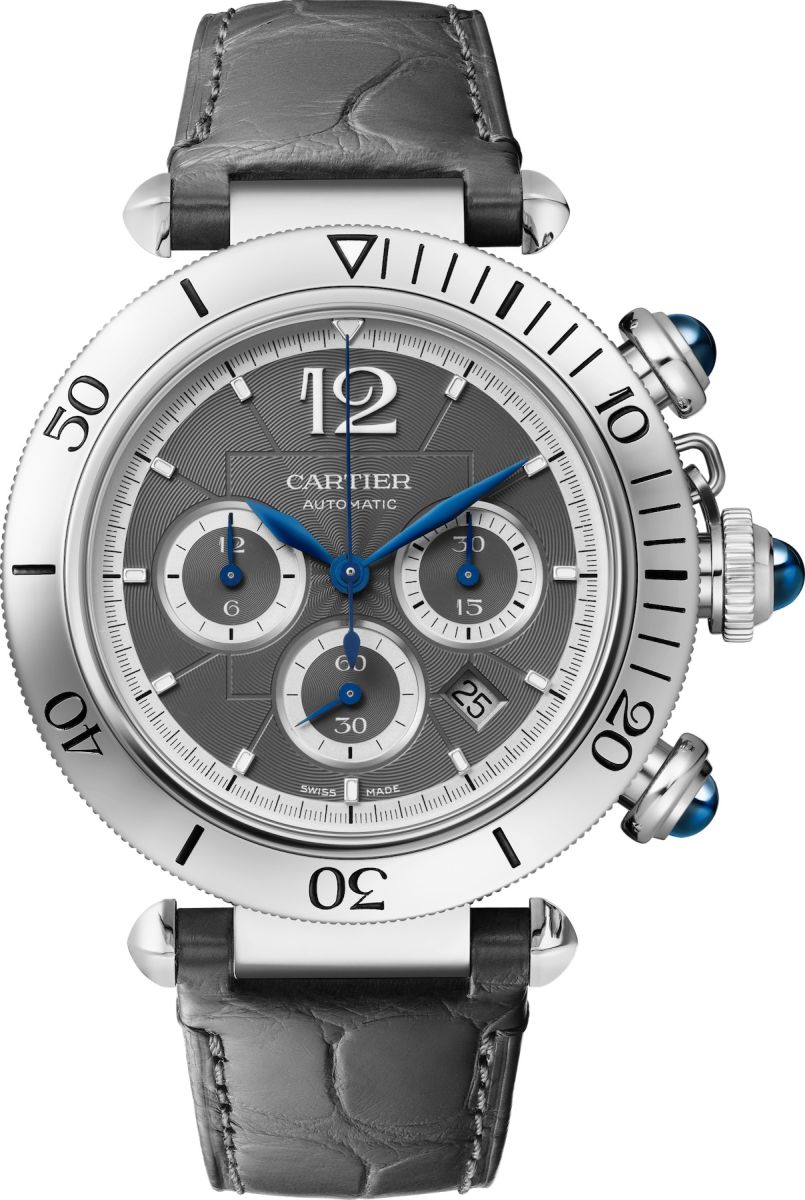 The 41mm Pasha Chronograph follows the style of the time-only Pasha with the cool mouse-gray dial. Here too, the date sits between 4 and 5 o’clock. Though it certainly is not out of place, it would have looked better with a gray date disc. Blue spinel tops the crown and pushers, much like the chronograph models from previous collections. In contrast to the luminescent hands from previous collections, the blued hands here may give it less sporty look. They do provide a more luxurious feeling, though. The automatic 1904-CH MC caliber has a power reserve of 48 hours. The Pasha Chronograph also comes with both a steel bracelet and the interchangeable QuickSwitch gray alligator strap with a folding buckle. This model carries a price of  €10,300. 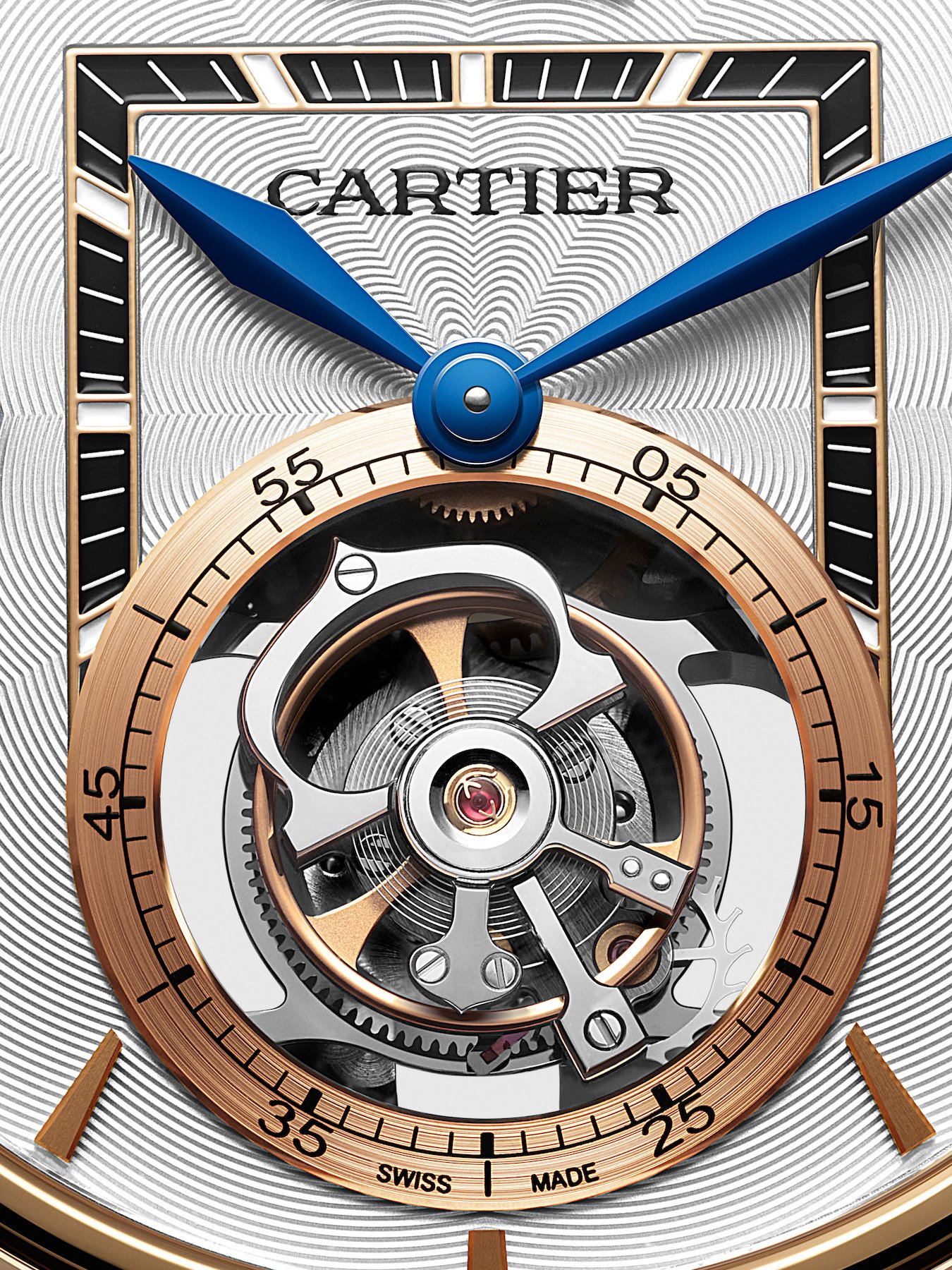 During the years of  “Collection Privée, Cartier Paris” (1998-2008),  there were several models with a tourbillon caliber in the collection. This made sense because the 38mm case lent itself well to the size and depth of the movement. CPCP was mainly characterized by historical models equipped with calibers from one of the other Richemont brands. Back then, Cartier had not yet become an in-house movement manufacturer. But in the years after CPCP (2008-2018), Cartier focused more on its male clientele and developed a series of complicated movements. Among them was the mechanical 9552 MC Flying Tourbillon caliber. The movement found its way into various models, and it now powers this new Pasha Tourbillon. 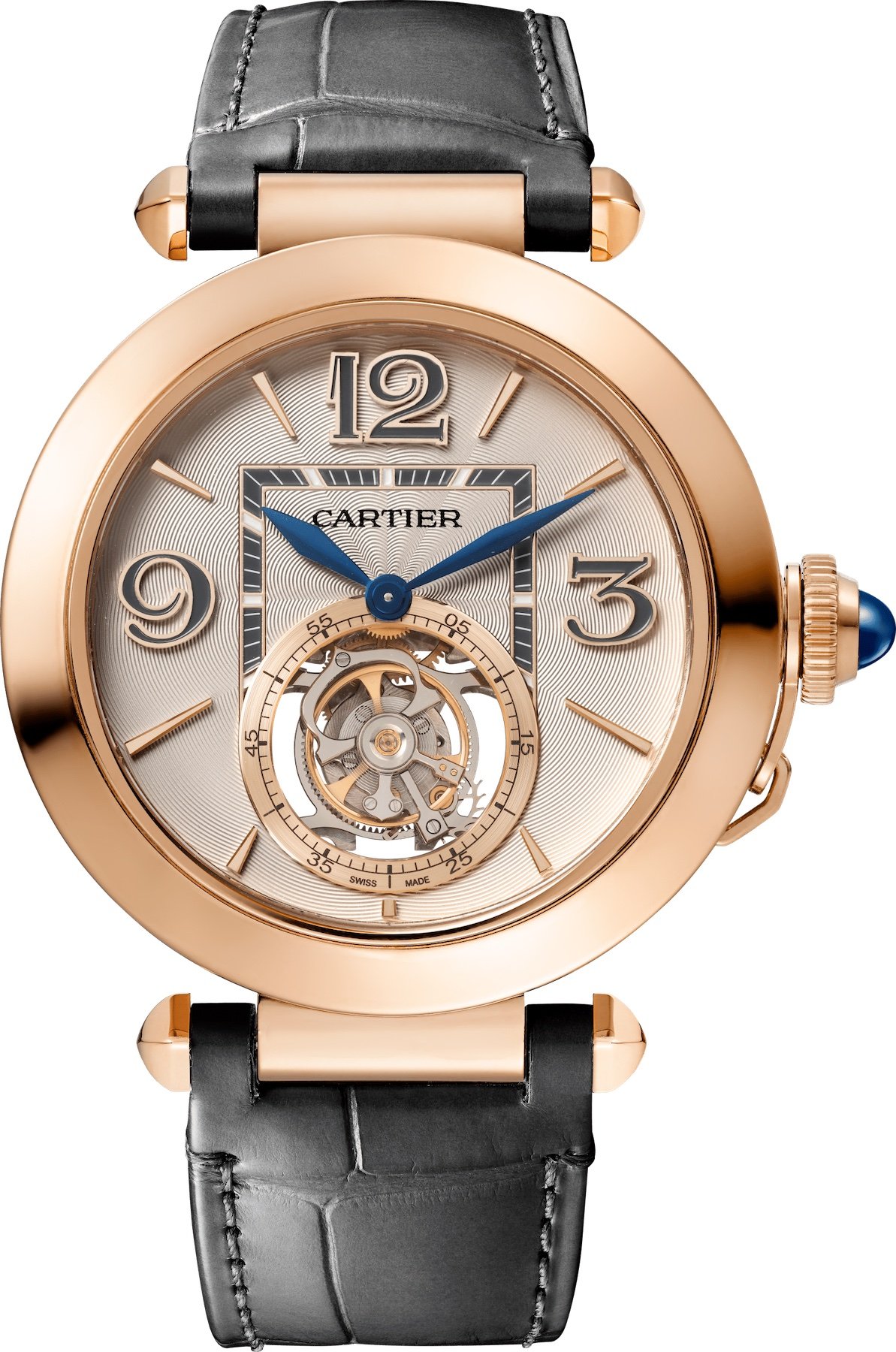 Now, you might be thinking, “A timepiece that has to be wound by hand every day with a small crown hidden under the robust crown cap? How will that work?” Fortunately, for the Pasha Tourbillon, Cartier uses the entire crown to wind the watch. That means there’s no need to unscrew the cap to get to the crown. Only the automatic models (where the crown is hardly needed) require that now. The 9552 MC movement has a power reserve of 50 hours.

As with the earlier CPCP Tourbillon models, the typical bold applied numerals grace the dial of this 41mm pink gold Pasha. The overall design of the watch, though, is now less open and transparent, giving it a much calmer appearance. It’s quite an astonishing design, although I find the wide gold ring around the tourbillon cage a bit on the hefty side. But that’s a matter of personal taste. The Pasha de Cartier Flying Tourbillon is listed on the Cartier website for €82,500. 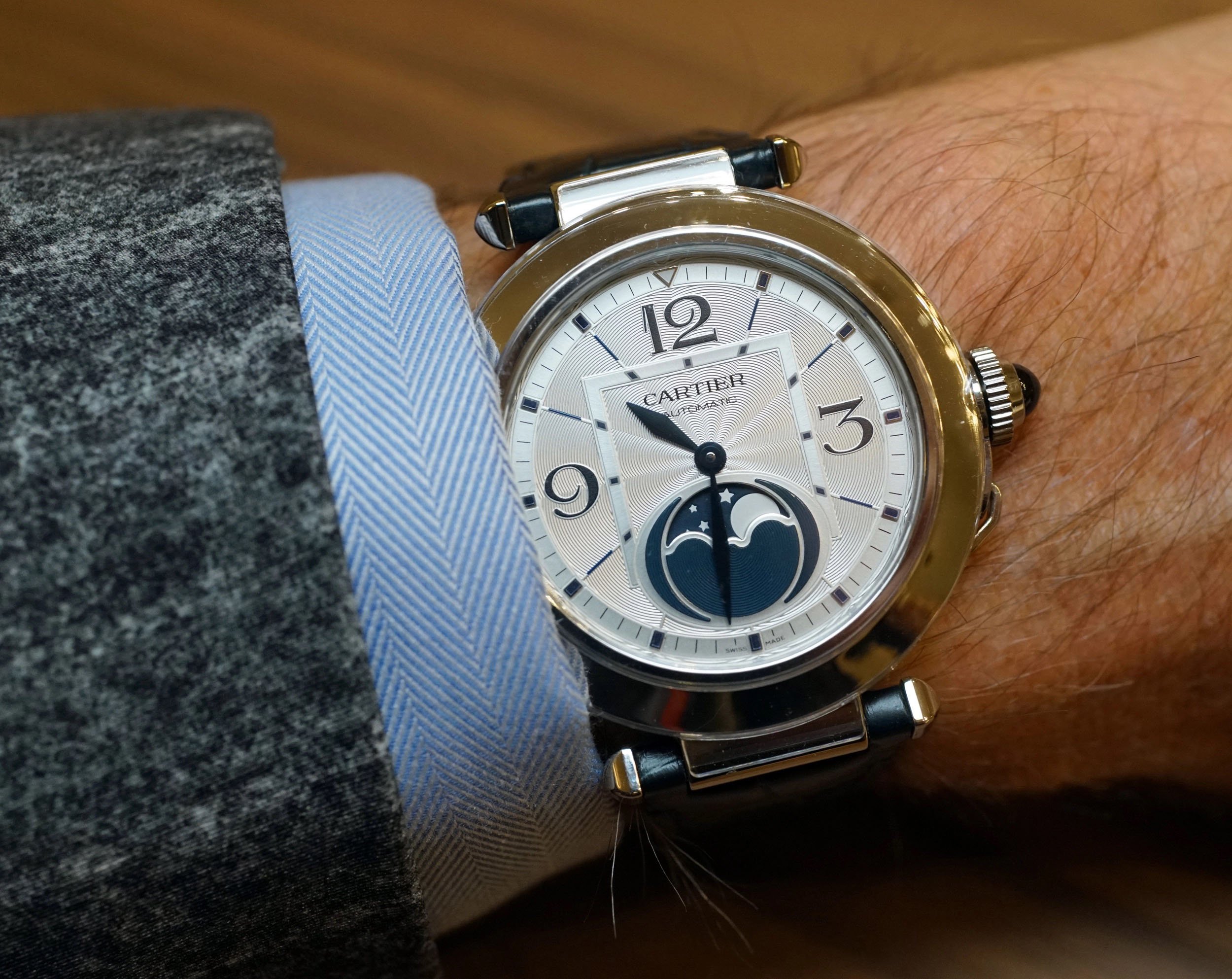 With the discontinuation of the Drive de Cartier, I felt sorry to see the model with a moonphase go. That was my favorite complication in the Drive de Cartier models. A caliber with a moonphase is something we don’t need that often, but it gives the watch something so romantic. That’s why I was delighted to see the 1904 LU MC caliber return and now in a case with a less corporate look than that of the Drive. This is the sexier-looking Pasha de Cartier Moonphase. To make the watch accessible to a wider audience, the brand decided to launch the watch in both rose gold and in an all-steel case at the same time.

From a visual point of view, the two timepieces look almost equally stunning. Both have the blued hands and almost the same dial. I say “almost” because the steel version does not have the gold moon. The movement has a power reserve of 48 hours, and the watches come with blue or gray alligator QuickSwitch straps. The price for the 18K gold version is €21,100, and the steel model will set you back €9,200. 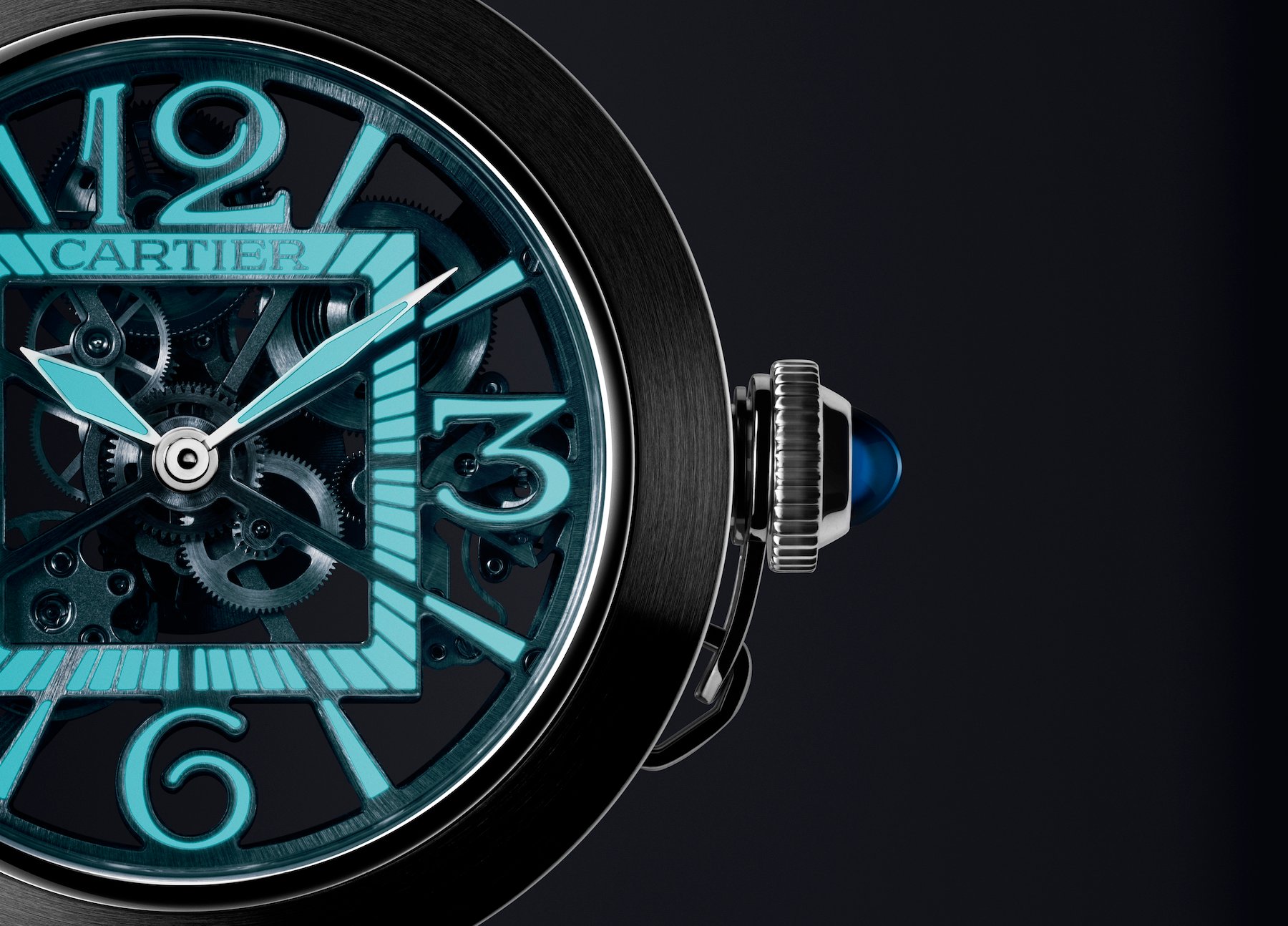 Cartier’s skeleton calibers as we see them these days were first introduced around 2009/2010 in the Santos 100 and Santos-Dumont and were very successful upon their debut. That was not so surprising because Cartier was one of the first brands that did not machine an existing movement into a skeleton. Instead, Cartier designed a skeleton caliber from scratch. Every part had a function, and everything that was superfluous was not added at all. The numbers even became bridges. Many other creations followed this principle, and often, Cartier had to rebuild the movements completely, such as for the Crash and the Tank Asymmetric. This form of skeleton caliber often gives a better time reading due to the small number of interconnections. This time, we find it in this new Pasha, which features a black ADLC coating to give it a sporty appearance.

The automatic 9624 MC manufacture mechanical movement has a power reserve of 48 hours. The Pasha Skeleton is available in two versions. First, there’s steel with black ADLC for the case and Super-LumiNova for the bridges and hands. There’s also a limited-edition white gold jewelry version set with 2.95 carats of brilliant-cut diamonds. The steel ADLC Pasha de Cartier Skeleton is listed on the Cartier website for €28,200. The diamond-set version, however, goes for €140,000. 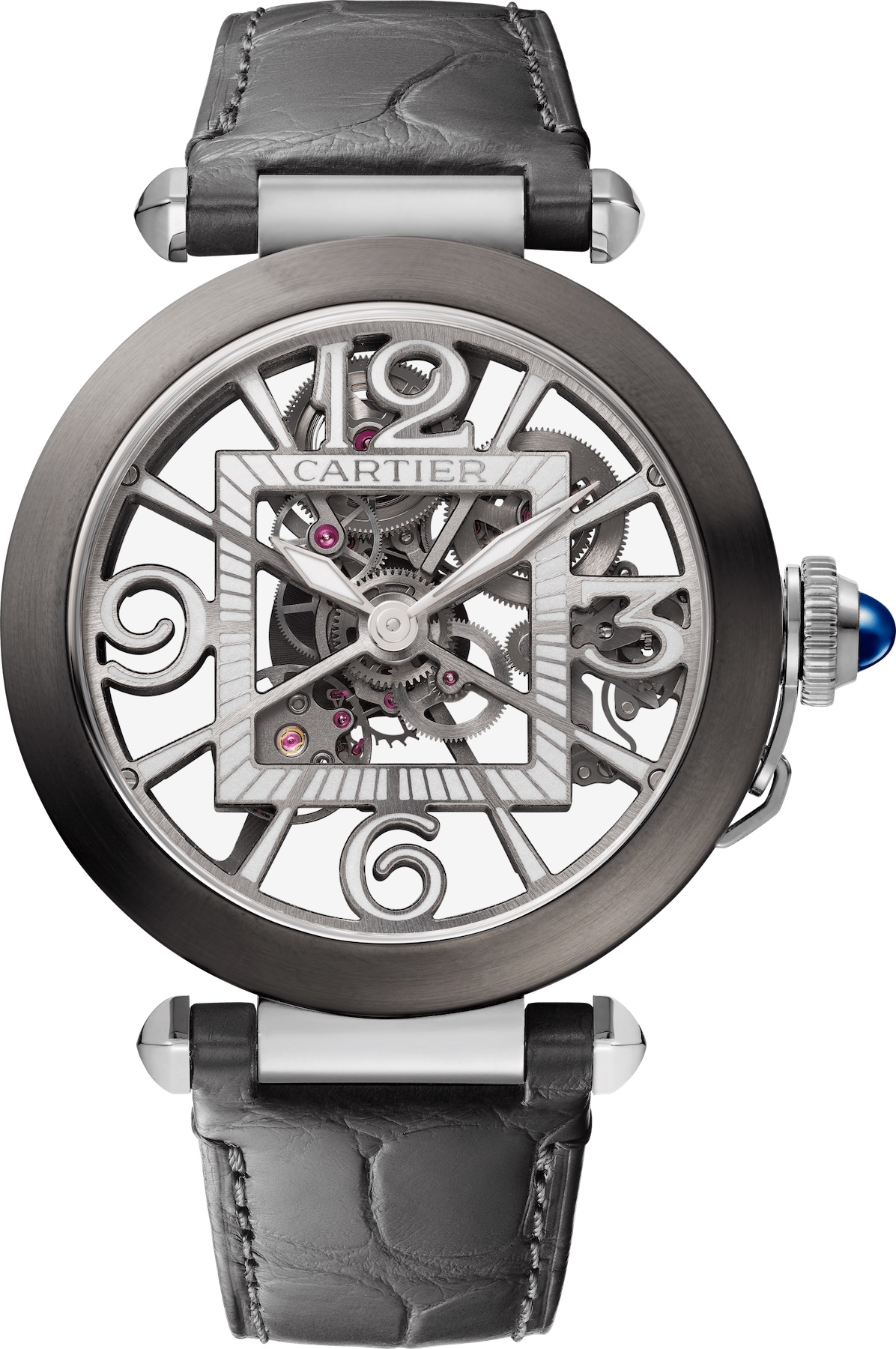 Cartier is a jewelry brand by origin, and design has always been the most important factor in the development of a new watch. Nevertheless, the brand developed a number of complicated calibers in the years between 2008 and 2018.

The brand decided to go in that direction mainly to meet the desire of its male clientele at that time, to use more calibers developed and manufactured by Cartier itself, and also to prove that it is more than just the “King of Jewelers”. The moonphase, flying tourbillon, and skeleton calibers we just discussed are just a few of those complicated movements that found their way to the new Pasha line thus far. I wouldn’t be surprised if more are to follow. In that respect, the Pasha case is an ideal shape to accommodate these types of calibers.